Log in
Search
Latest topics
» Props for Texaco Event
by sosam117 Today at 6:21 am

» Shuriken 1/2A engines
by BlackWidow Yesterday at 8:03 pm

Roddie the reality is it DEPENDS...( stabilator offset inline, above, or below wing Center line)

I also built the Goldberg and later the Brodak Lil Satan kits, as per plan, and they both fly good with the stab slightly above wing CL

For a precision stunt plane many other factors aerodynamically come into play
Flaps...yea or nay
Engine Thrust line, offset up down or in or out
Laminar flow over wing and stabilizer relative to elevator (very rare to see a stunt plane with just a stabilator)
Engine and prop induced gyroscopic precesion
distance from wing TE to Stab LE

Many, perhaps most, designs are NOT Zero Zero Zero* incidence aligned....some are

Back to the Lil Satan...I doubt the way it fly's--- if any of us could definitively say: stabilator inline, above, or below wing CL makes any difference

too cheap and small a plane to even spend much time worrying about,,,,build it per plan and go crash the hell out it it giggling very flight..... a lot of Adrenalin load with this bugger!....grin

@RknRusty wrote:Roddie, yeah there are a pair of plywood ovals that fit into a relief in the boom, and they have pin punches for the hinge.

Yes, see picture 2 above next one down from the booms.

I've owned a few Lil' Satans over the years and never been happy with the elevator hinge setup.

Here's what I did in my recent Satan rebuild. I sunk the pins into the surface of the elevator from the bottom and held them in place with 1/32 ply "horseshoes". 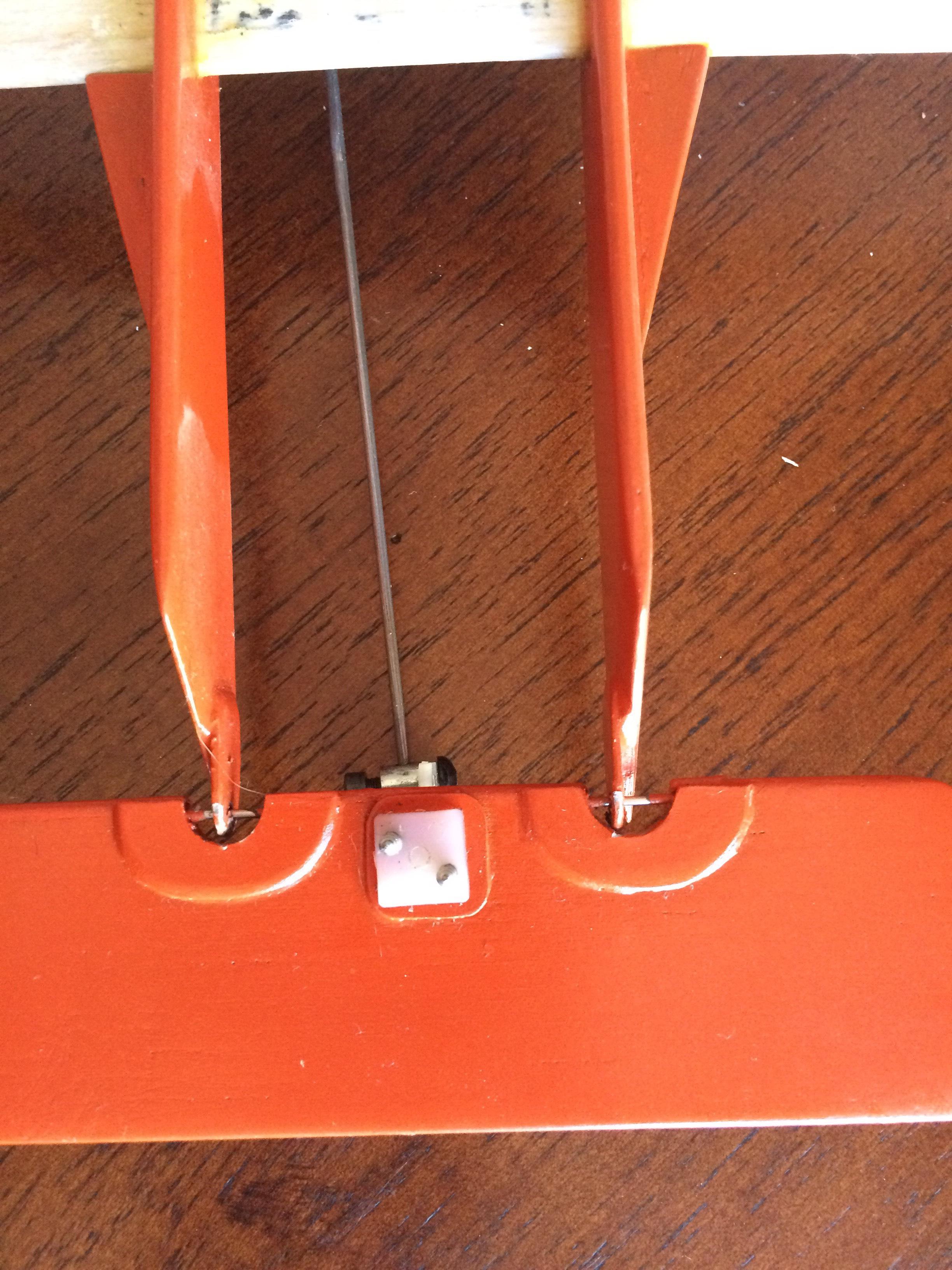 I put 1/32 teardrops on top for further reinforcement. 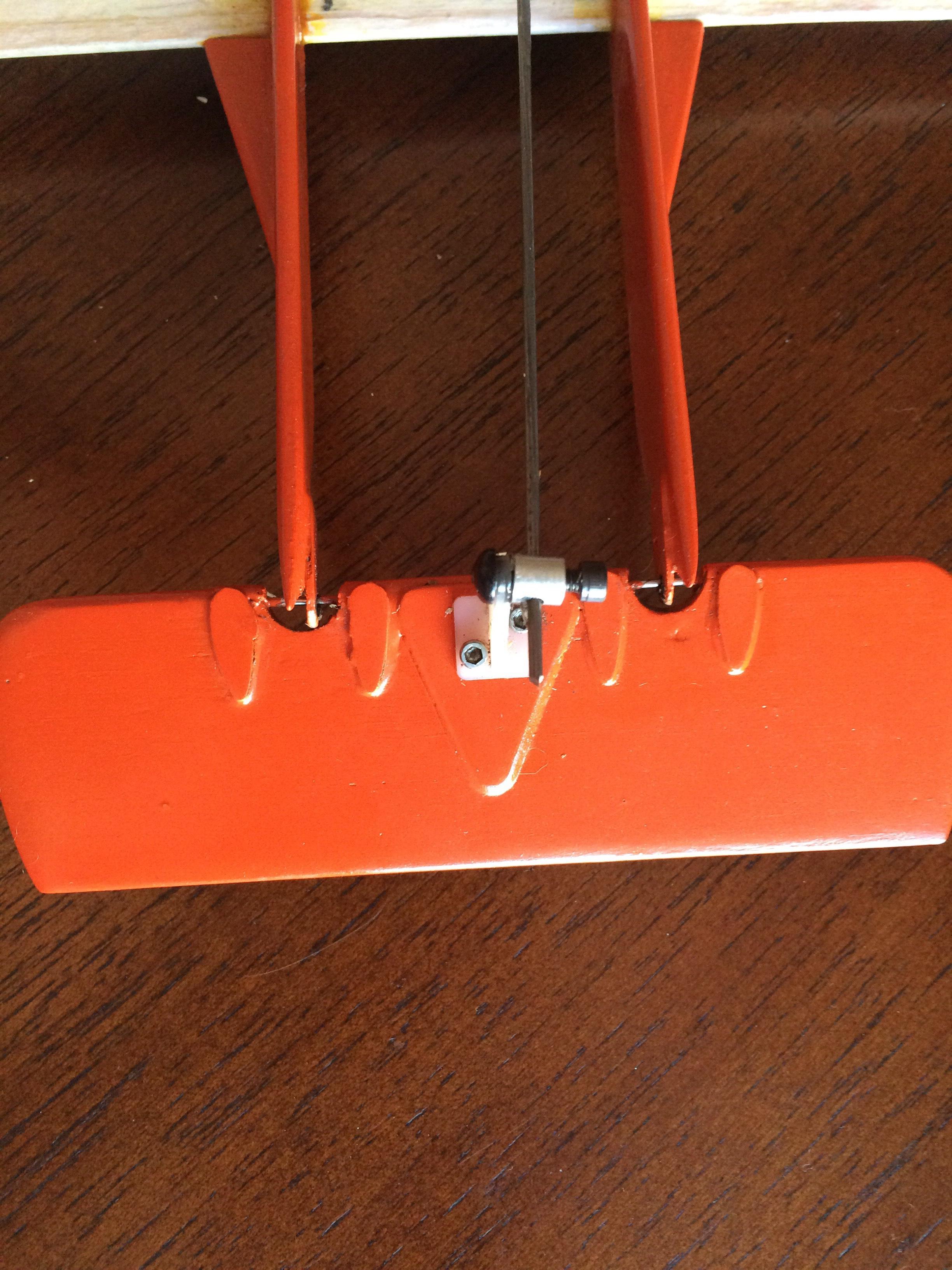 Like Rusty I chose to go with a bladder feed Tee Dee. 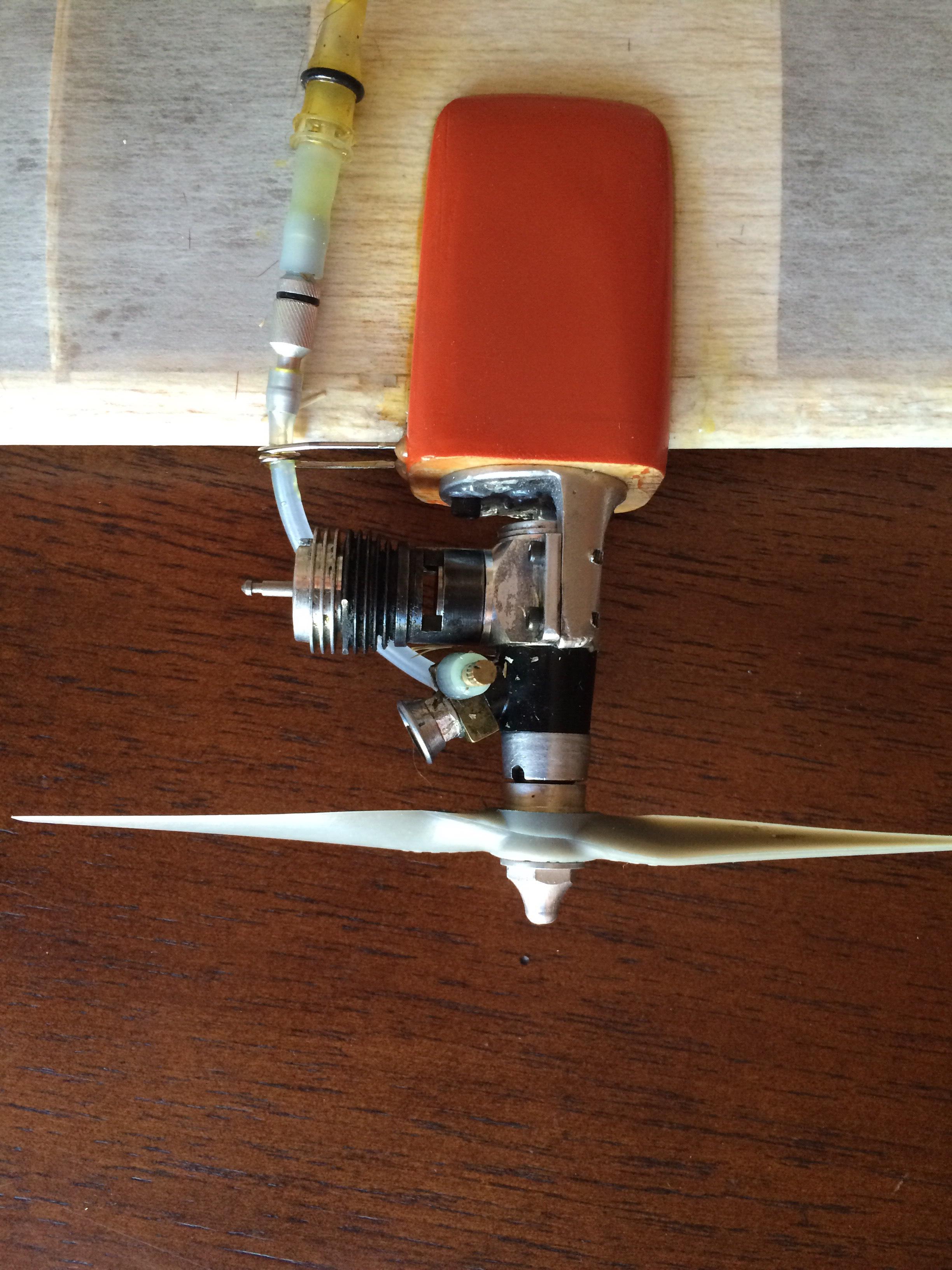 @JPvelo wrote:I've owned a few Lil' Satans over the years and never been happy with the elevator hinge setup.

Here's what I did in my recent Satan rebuild. I sunk the pins into the surface of the elevator from the bottom and held them in place with 1/32 ply "horseshoes".

Not too different from my hinge. Certainly better than the sewing pins the Goldberg kit suggested. I originally used them until I renovated it for the Traveling TD .049

@JPvelo wrote:Like Rusty I chose to go with a bladder feed Tee Dee.

That's a good motor mount, I haven't seen one like that. And your stabilator control horn, like mine, is beefier than the tiny kit horn.

I should add a caution about my upgrades earlier in the thread. A few flights ago this plane started uncontrollably rollercoastering. I thought my lines were too dirty and sticking, and then found my threaded adapter at the rear clevis was breaking, and finally broke off at the 2-56 jam nut. So the clevis and jam nut may not be the best idea... or maybe I got unlucky. But I've heard of other connectors breaking at the jam nut too, so maybe that's not a good thing.

I do love writing about my Li'l Satan. It has been one of my most successful models ever. I have most of a new Brodak kit still on the shelf too. Steve 66Malibu gave it to me. I wonder if he ever comes back here and reads our posts.
_________________
Don't Panic!
...and never Ever think about how good you are at something...
while you're doing it!

That's an old Tatone brand mount, they pop up on eBay from time to time. I have one with long mounts designed for a space hopper that is positively bada##.

Rusty, I use the clevis all the time. They do break, the clevis can also spread allowing the threaded portion to slip on the threaded rod. Many times one side of the clevis breaks and hopefully it's not the side with the pin going into the horn. If the pushrod isn't completely a straight push through the arc, the jam nut prevents the clevis from obviously turning but at the same time it causes the spring steel to flex opening slightly and closing. Eventually it causes a failure. I have found that sometimes this is avoidable by sanding the control horn thinner. Nylon doesn't sand very well and this can take a bit of time.