Part II-Twin Maidens take to the sky at Fort Jackson

An addenum, as told to me by WR

RknRusty wrote:I forgot to mention this.
I was fueling my plane and Wayne starts saying, "Rusty, come here, come look, hurry up..." I'm like, okay what's the emergency?... Got up and walked over to where he's standing by Bob's plane which is getting its lines rolled up. He told me to pull the control lines back and forth and look in the cockpit. I looked in to see a realistically detailed seat and instrument panel, pulled on the lines, and THE STICK MOVES BACK AND FORTH! It was not the SHA-ZAM Argus in the picture, but another oddity with a big pointy wing, that is said to have well over a thousand flights on it. What a fleet he's built over the years....

Okay, I got that all wrong. Bob's Argus in  the picture is the one with over a thousand flights. After talking more about it today, Wayne tells me the "oddity with a big pointy wing," as I called it is a Starlight, designed by Charles Mackey, and powered by a Fox .35.

Bob's isn't even finished yet, so this may have been its maiden flight.
Here's another another: 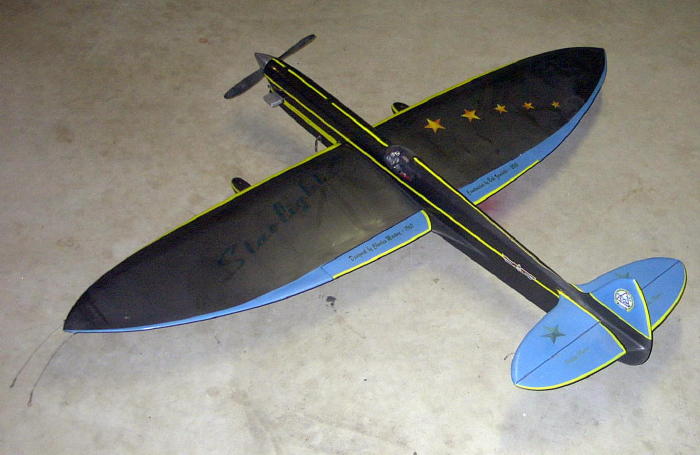 Charles Mackey made some very nice designs. The Lark is one I'm building now. Bob Hunt made the lost foam jigs for me and I'm slowly getting the pieces together.