I’ve long wanted to acquire a Cox PT.19 as it’s probably, if not “the” at least one of, the most recognisable Cox model aircraft.
My older brother had one back in the early sixties and I still remember its maiden flight. After a couple of shaky circuits he executed a perfect figure 9 with the standard result. It laid around the house for a while then disappeared, probably on the rubbish fire out the back of the farmhouse.

I’ve seen plenty come up on eBay but even a few years back when they were a lot cheaper the freight to down under just killed it.
Then a couple of months back one popped up on TradeMe, a New Zealand type of eBay. The price was right and shipping even better.

It’s came complete with box (fair to rough) all parts, accessories and paperwork and only minus the decals. It has been used with some old fuel residue remaining but overall it’s in excellent condition with no cracks, chips or any signs of damage at all.

Reading jsesere’s post “Cox PT-19 history” it would seem that mine is a 4th version 1974 to early 80’s but someone may be able date it better than I. 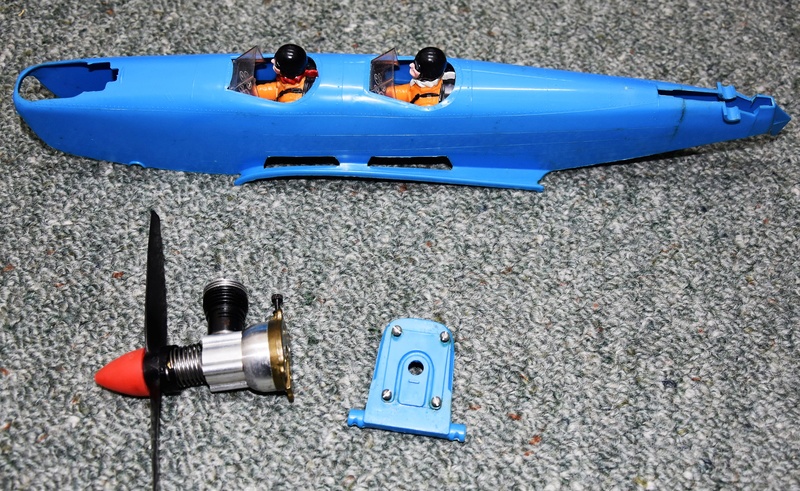 I know this forum is awash with PT.19 stories similar to this but what I thought might be of interest is its manufacturing history. On the side of the box it says “Printed in New Zealand” and then further along “Manufactured under License by E. Allan Brooker Ltd., Auckland NZ”.

A quick web search revealed that E. Allan Brooker Ltd was a New Zealand company that borrowed tooling and dies from companies so as to be able to make their products under license during the days of import licenses, Airfix, Bandai, Monogram, and obviously Cox as well, being just some of them. According to the NZ Register of Companies Brookers were deregistered December 1993.

Another interesting point is what is written under the wing. Is says Kenbrite – Cox,  PT-19, Flight Trainer, Made in Australia. 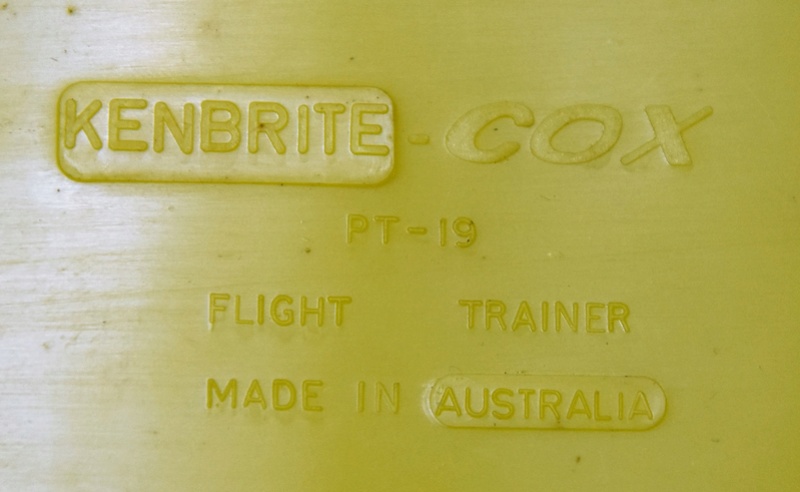 I found this remark on a forum after another web search.

“Apparently, Cox made a deal with Kenbrite toys of Australia and sent them molds. The blue and yellow are slightly different shades, and Cox sent the engine assembly with wheels, bolted to the firewall, along with the boxes to Kenbrite”

So how did a Kenbrite wing end up in a Brooker kit? Maybe Brookers were short on a production run and got some from across the ditch or maybe a previous owner broke the wing a could only get a replacement from Oz. One will never know but at least I know for a while we made PT.19’s down under.

Great score Dave. Happy for, and jealous of you.
Can't help wondering what became of those parts
molds.
Bob

Good deal man , some info either i forgot or didn't know

You got plans to put that baby in the air again or just admire it ? Does make you wonder what happened to those molds were they sent back to Cox or ...

Nope, no flying for this one, by me anyway. Destined to be cleaned up and join my row of hanger queens.

I had always thought these were made overseas and shipped complete to their destinations too. So yes where are the molds.
If it was viable to do it in Australia and somewhere as small as New Zealand they probably did it in England and Europe as well.

Perhaps someone who was involved with Cox would remember if they were ever returned.

The only Cox type RTF model produced in England was the Triang Fledgling. 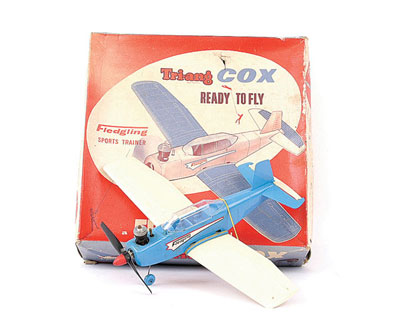 I doubt that the moulds originated from the USA as Triang produced their own plastic models and parts. 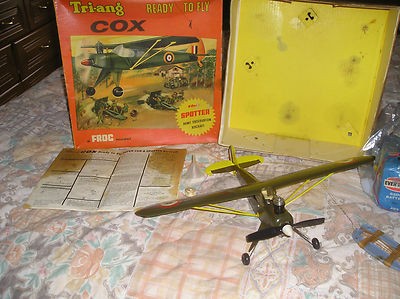 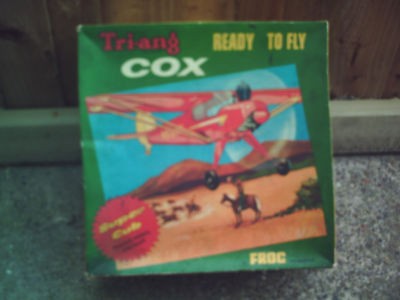 These are all early Sixties. 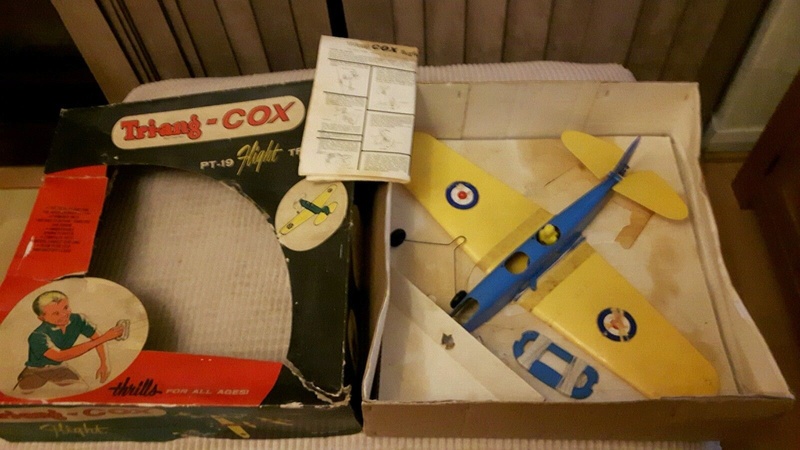 Hey Dave, Congrats on finally getting a PT19! I noticed in the below pic, that the engine seems to be a later Babe Bee variant than the vintage of the fuse? I guess that's totally possible where Brooker was under license from Cox. According to your research, they could have been importing the Babe Bee engine from Cox as late as 1993. 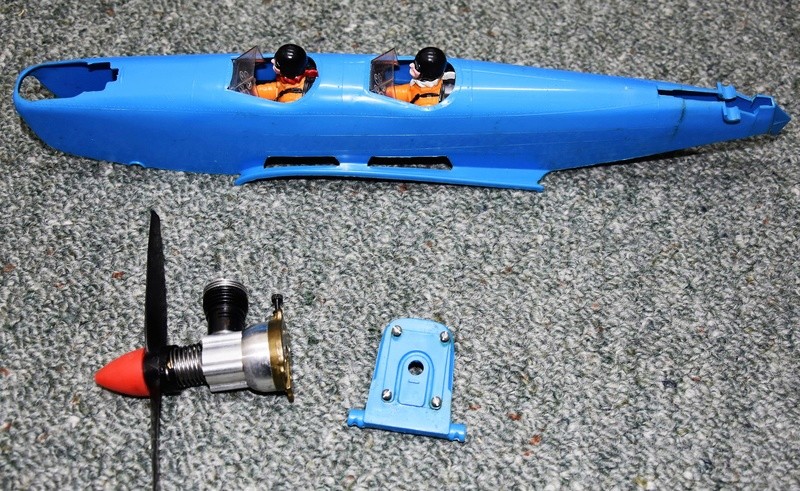 I don't know when (or if) Cox switched to the slit-cylinder on the Baby-Bee powered PT's.. but the cam-style starter-spring is definitely a later feature. A L/H 6" x 2" prop was also standard-issue on most. I have the later horseshoe-backplate/external tank version. I don't know the year that Cox switched to that configuration though.

It does appear to be a bit of a bitsa but I think there's a bit of mongrel in me as well so maybe we're a good match.

It does appear to be a bit of a bitsa but I think there's a bit of mongrel in me as well so maybe we're a good match.

:lol!:I hear ya' Dave! Your model is a definite conversation piece with it's own rich history!

Music is good.. It's such a living thing with me. There's always something new happening.. without necessarily my planning it. Gigs frequently pop up at new venues. My wife and I also perform as a duet. We were asked to perform "On Eagles Wings" (Josh Groban style) for a funeral-mass just yesterday for this coming Wednesday. We've already rehearsed it. I'm hoping that there's a piano in the church... I'd much rather that than an organ.

The StilBurnin' band recently played an audition-gig at "Toby Keith's Bar" located at "Patriot's-Place" in Foxboro, MA.. a stone's-throw from Gillette-Stadium. It was the Sunday prior to the Columbus Day (Monday) holiday. All bands who play there, do an audition-gig. The thing is.. "their agent" called us first.. and stated that they (the club) wanted us in there. This happened just days before Labor-day weekend.. and we couldn't make it work. So we scheduled the Columbus Day weekend gig. This place has a 1500 person-capacity! The agreement was.. $300.00 pay for the audition gig.. standard audition pay. Attendance was probably 1/5 capacity that night.. but was assured to be a non-factor in our consideration. The gig went very well. There was a good sound-system/sound-man (young kid..) and we didn't have to haul our system in.. which saved a lot of time and effort.

We played this past Saturday night (two weeks later) at a Lynyrd Skynyrd-themed bar.. the "Simple Man Saloon".. (a recurring venue for the last few years) where I asked our Bass-player/business-mgr. about the pay from "Toby Keith's" bar.. He stated that he doesn't think that they're going to pay us for that night's performance. I'm thinking.. wtf? There were two different MOD's there to hear us.. plus their entertainment agent...  it was a rainy Sunday night... and there were at least 300 people in the place buying drinks while we played our asses-off. A "freebie"???? I don't think so.

Maybe we're not the "flavor"... that they were looking for. We play Southern Rock.. the best in New England.. by far. Toby Keith's has "Pop-Country" bands.. pretty-much exclusively. Oh yea.. again; they called us. Reportedly... if you're "accepted" as a band.. and given a date(s).. the pay would be the most significant that our band has seen.. playing bars. And they're all managed the same.. believe me. It's business. When you're an artist.. that's a tough aspect to wrap your head around..

Yep sounds the same as it's been for decades, Managers, Agents, Bar owners etc screwing musicians out of their time and money.

They have the leverage and they ain't afraid to use it but I ain't telling you nothing you don't already know.


Sounds like you could do with an afternoon off

I traded a guy in OZ a Cox Seafire for a Cox/Kenbrite PT-19 about 20 years ago.

The PT-19 was a lighter shade of blue than USA Cox made versions, and the yellow was a slightly different shade too. The wing was changed to read Kenbrite Australia. The box had stickers covering up the Cox Santa Ana California address and had Kenbrite Australia address printed on it. The guy who traded it too me said his Dad owned a Hobby Shop in Sidney, and this was a display version they had in the glass case in the window, so it was never flown. He said Cox had shipped the boxes, and the engine mounted on the firewall with the landing gear, and instruction sheets, along with the lines, handle and glow plug clip. The PT-19 Molds were modified by Cox  to have Kenbrites name and the parts were injection molded in Australia. Kenbrite was a huge toy/hobby manufacturer at the time and made arrangements with Cox to produce PT-19s under license, well at least the plastic airframes. The engine mount is a different color of yellow, darker, like the USA made ones.  He was not aware of any other Cox products  being licensed by Cox to Kenbrite, but knew quite a bit about the Kenbrite PT-19. The import duties were very high and that is why Kenbrite was able to sell Cox products in Australia as they were made in part in Australia.

As to the differences noted about the slit cylinder, 6x2 prop and snap-starter, Cox used these later changes with the metal tank and back to be compatible with the earlier fuselage mold and earlier engine mount. At that time, they no longer were making the older versions of the PT-19 with a metal tank version of the engine, and had discontinued the large exhaust ports (slits were to minimalize melting the fuselage plastic and also risk of fire). Cox had switched to plastic backed engines, the tank was part of the fuselage, and the spring starter was revised with a plastic ratchet disc called a Snap-Starter. The newer fuselages had the window frames (no clear windows) and pilots molded as one with the fuselage.

So from this we can see that Cox let Kenbrite have the old, obsolete molds as they had made newer ones for the plastic backed engines, which was a cost cutting measure to increase profits. Cox still made metal tank Babe Bees for retail sale at Hobby shops, and some of their cars.

I was thankful for the slit cylinders, my practical side told me that they would keep seeds and stuff out of my engines as I often flew (and crashed) over fields. Seems like I was always picking trash out of my engines before flying them again.