I had not measured that cylinder in that way but went ahead out of curiosity….I used a little different method…. Just measured OD - .366…. And ID with the calipers in the
ports - .346….Which only leaves .010 per side…. Very thin…. Someone correct me if I’m wrong…

This cylinder is a thin wall version, Yours looks like a later thick wall which may account for the differences…I am sending mine to a machine shop in a day or two to attempt to straighten…. 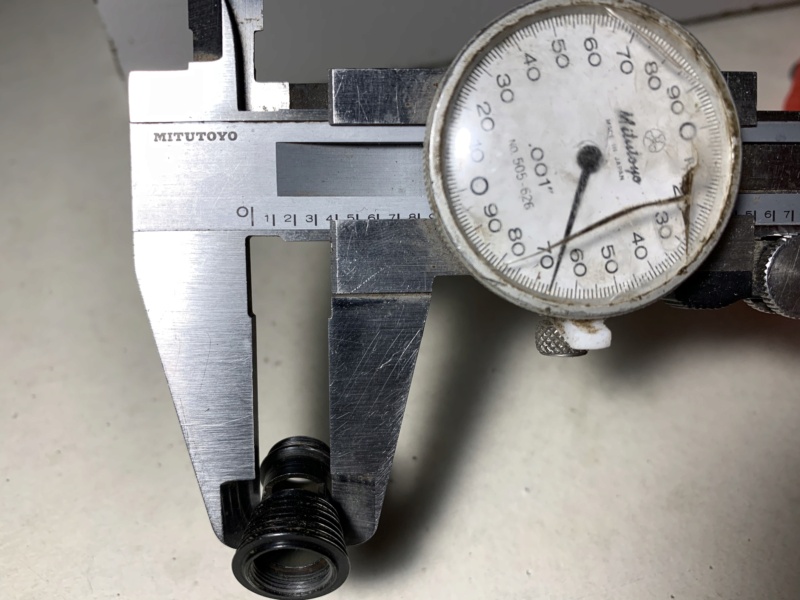 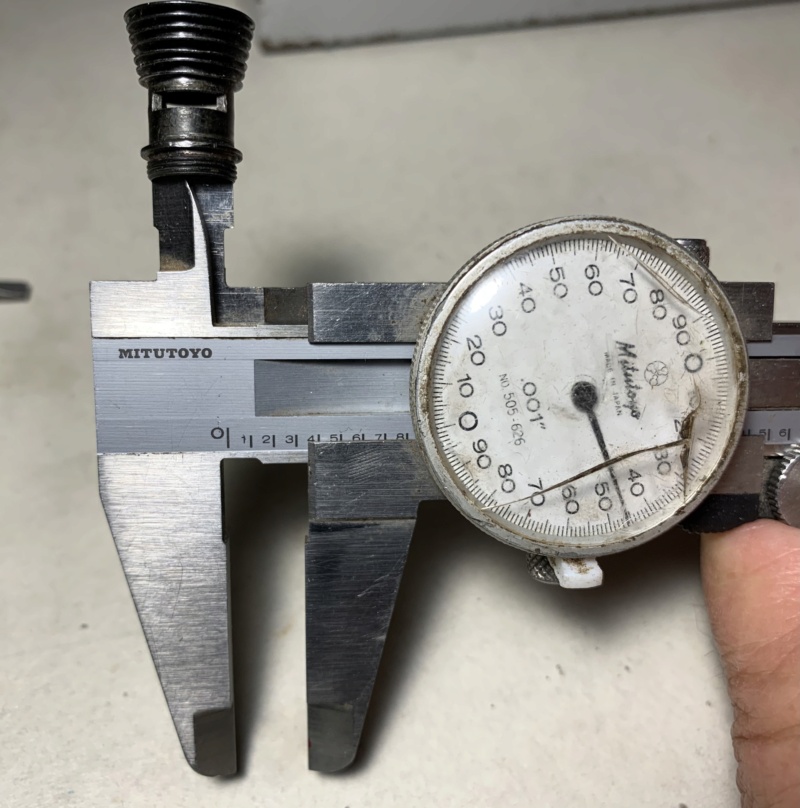 That looks like a good way to check it. I didn't think of measuring across the low areas of the 2 transfer ports. last night I was thinking though that if the threads are the same outer diameter as the main cylinder area I could just measure the thickness directly between the threads and the bottom of the transfer port. Git the same results as I did using the involved method from yesterday. .020"

Yea, our difference is I apparently have a thicker main cylinder wall, mine measures .386 versaces yours being .366.

Good luck with the machine shop work. Maybe they can fix it. 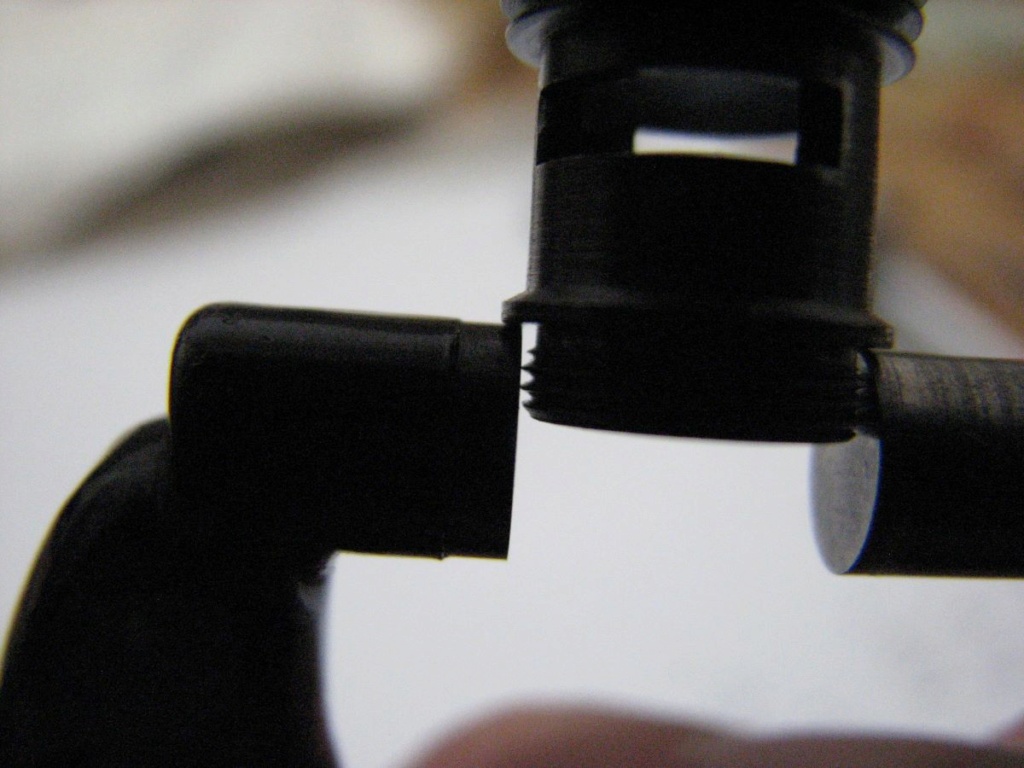 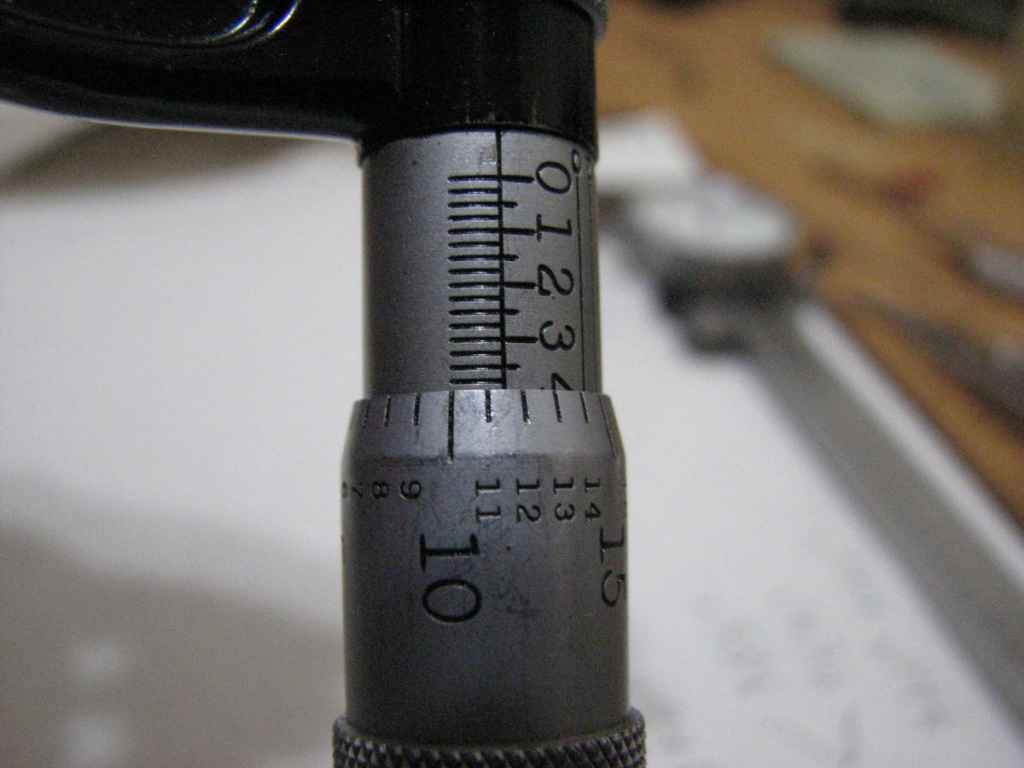 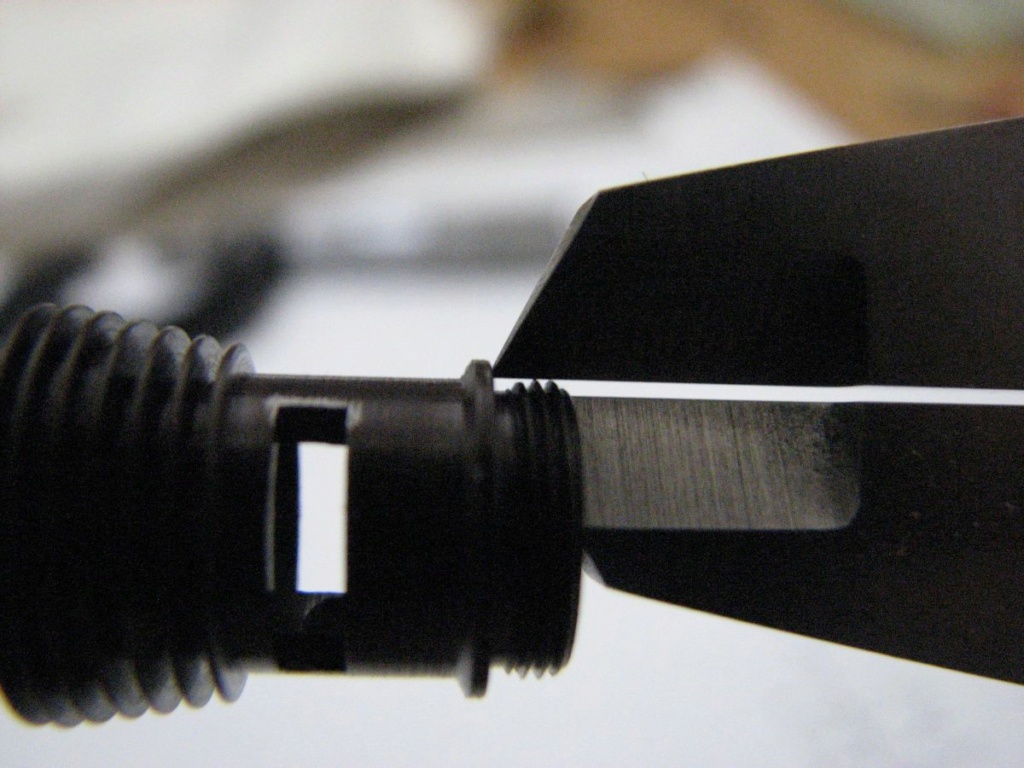 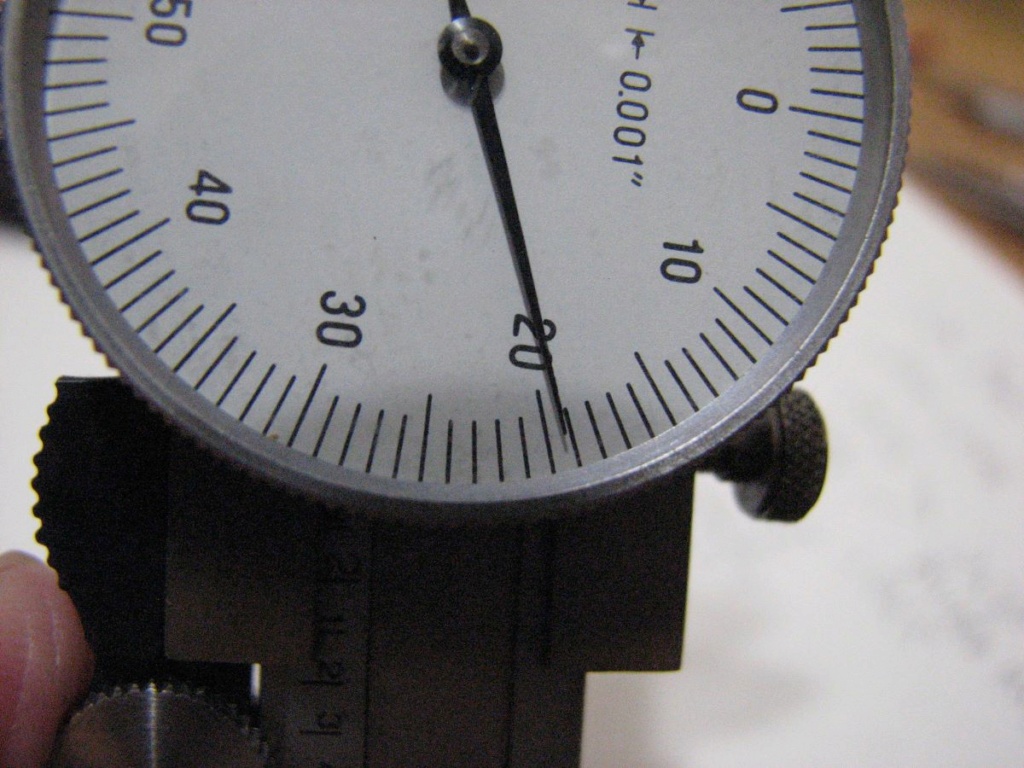 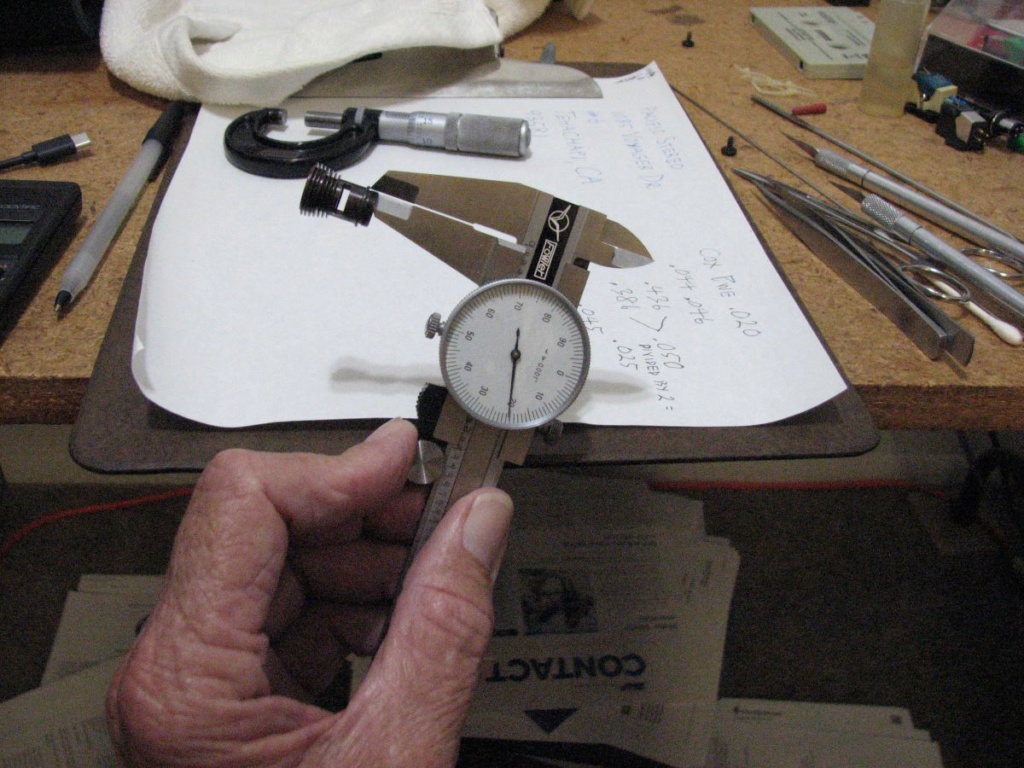 Funny, in the first post 2nd photo the 2nd and 3rd fins from the bottom on the right exhaust side look bent but in the latest photo the bottom fin over the exhaust port looks pretty badly bent. Is that the same cylinder?

Maybe it's an optical illusion too. The light is reflecting off that spot.

Anyway, so how does the piston fit in the top part of the cylinder? You might half to use some steel wool to clean the top of the cylinder to check it, there is usually a tiny amount of oil residue at the very top so it sometimes makes inserting the piston from the top a little hard.

Flipstart, I see what you are seeing…It’s just orientations and lightning angle… Yes, it’s the same cylinder….

When I checked for roundness of this cylinder I had not used anything other than a little oil… The piston inserted crown first in the top only goes in .030 - .040 but will rotate freely…The skirt will barely insert …… I think it is round and the cylinder/piston is tapered….. Yes, I could have cleaned better and tested further but it’s off to the machinist now….

If you still have yours apart how is the piston/cylinder fit? Think it is tapered or is it a straight bore?… Thanks for your interest in this project..

I think your right. I he cylinder looks to be tapered. My piston fits easily at the bottom and gets tighter as it nears the top. And it doesn't want to easily go in from the top, but if in carefull it will go smoothly. Not sure about the piston. Dial calipers aren't the best tool in the world to measure such small differences. I guess I could start the piston in the bottom of the cylinder backwards and see if it tightens up faster. Just a second, I'll try that. (pause). Im back. OhMyGosh! yes, the piston inserted into the bottom of the cylinder skirt first tightens up as the skirt just passes the top of the exhaust port, so the piston has a fair bit of taper along with the cylinder.

My little Pee Wee .020 has been apart for many a year just sitting in this plastic box. I think it's all there though; it hasn't been run much and is in pretty good shape. They tend to wear at the crank bushing and you can rock the crank at the prop up and down and watch the piston move up and down in the cylinder.

Well it sounds like the top half of your cylinder is OK so I wish you the best of luck with the machine shop. I'll keep my fingers crossed for ya. 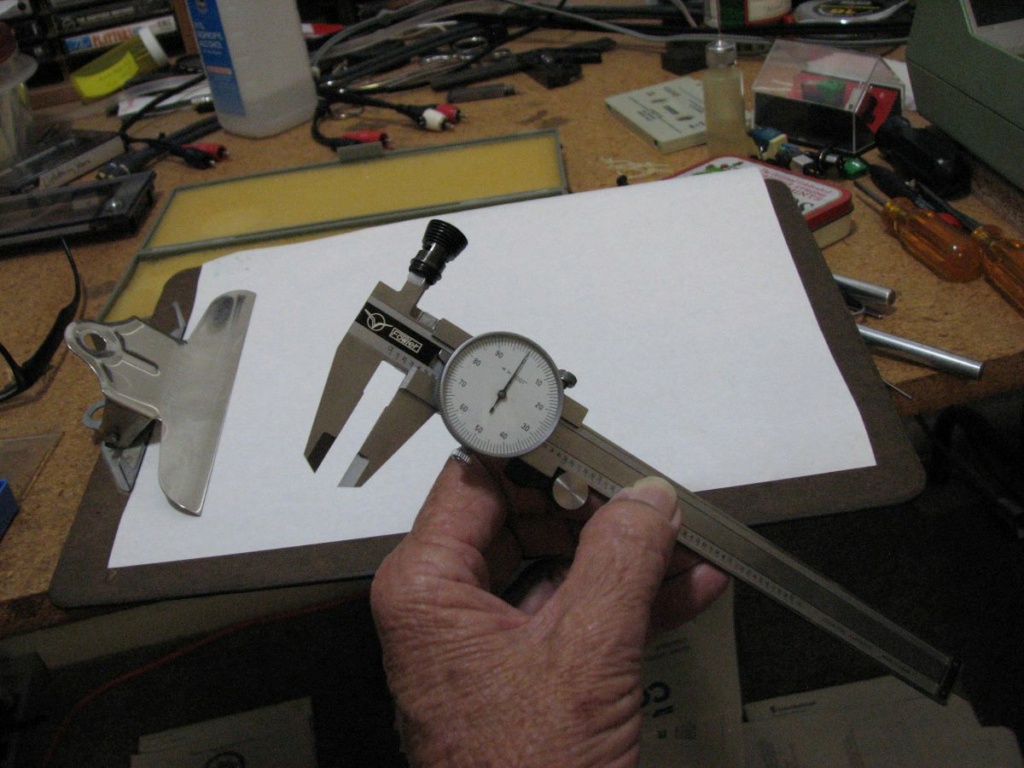 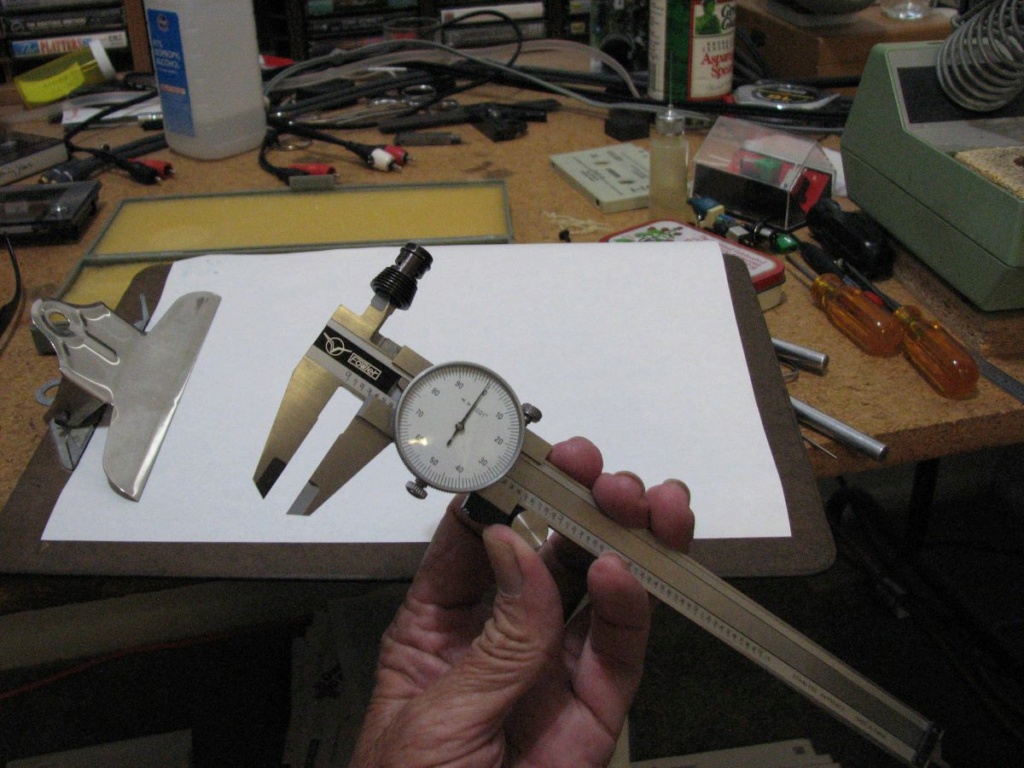 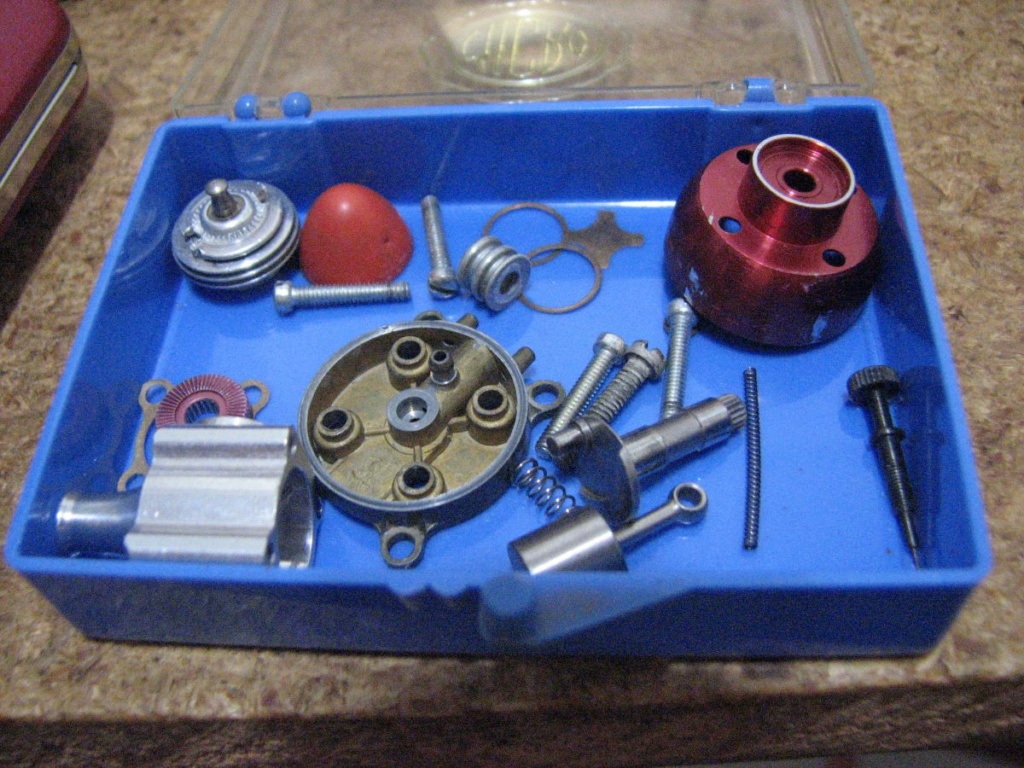 Hey Flipstart…. Well there ya go…. Good detective work!! …. I’m sure some of the old gaurd here already knew this ….Taper is only usually discussed for .049…. Pretty amazing what Cox was able to achieve on such a small scale….

rdw777... I'm sure several guys here already knew but oh well, we had fun figuring it out. They are pretty darn amazing little machines for sure.

I think I'm going to re-assemble mine at least for display and less chance of loosing parts.

I know...you weren't looking to buy your way into a solution, but you should be able to get to run the engine.

The cylinder is now repaired and the engine runs! Thanks to 706Jim!!

How he pulled this off on this tiny cylinder with the tolerances involved is amazing….. He was also kind enough to send the mandrels he made back with the repaired cylinder … I really didn’t have a lot of hopes when I saw how bad of shape it was in when I received the engine but what a change after I hear it singing proudly like it should…., 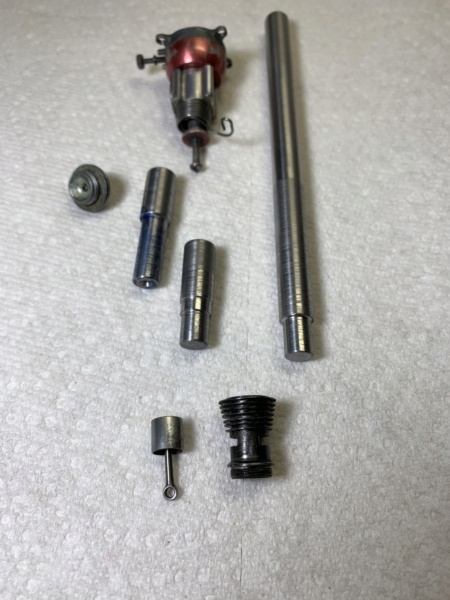 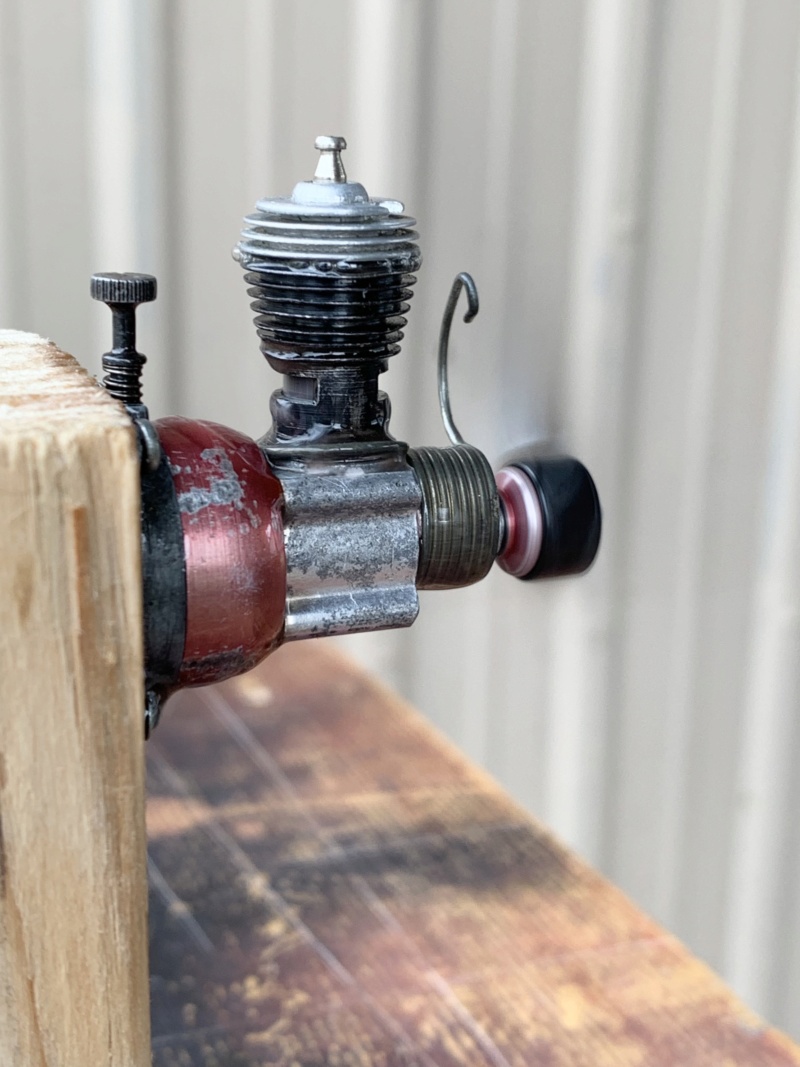 Yes, I see the bubbles around the head in the photo…. That was first run and it has two new head gaskets…. Tightened up an ran it two more tankfuls just fine… I mostly ran it rich but peaked it just few times… It really screams when leaned out… Was using a Cox
4.5x2 black plastic prop..,, It holds needle setting well 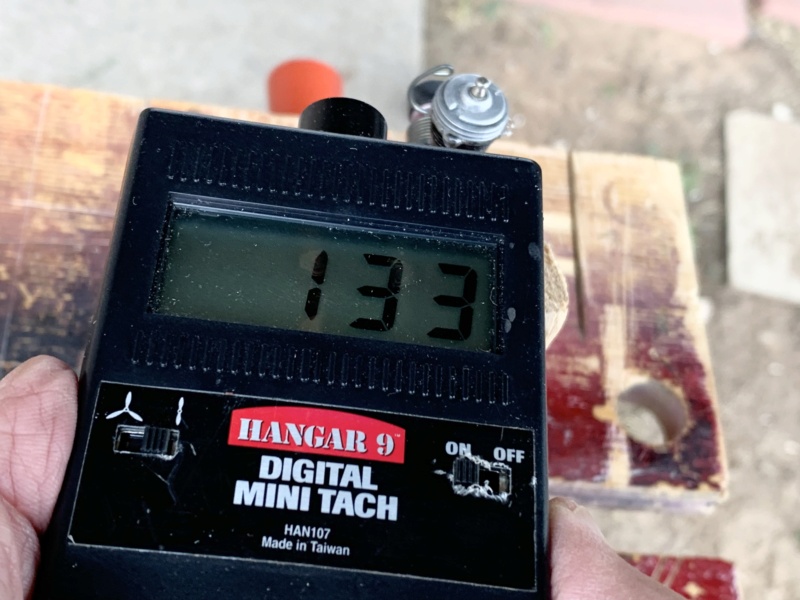 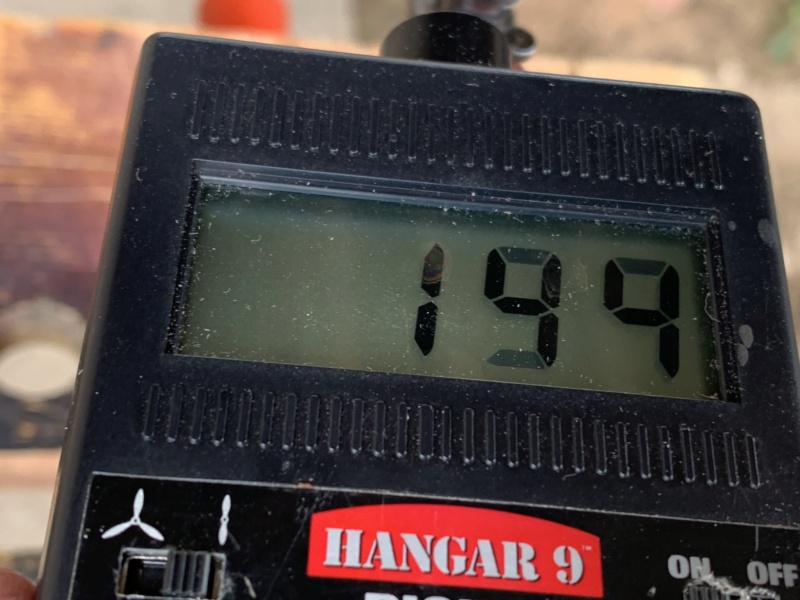 So to give it best chance to run I completely disassembled, Soaked it in Hoppes # 9 for a few hours, Rinsed with hot soapy water, Then clean water, Then dried with compy air. Reassembled lubing everything with drugstore castor oil…. I couldn’t get the starter spring off until I pressed the crankshaft out because it had been wound up so tight it wouldn’t clear the drive plate…. Another detail of this engine’s rough history…. I borrowed one from the parts box for tests..

I used all the tricks I learned here on CEF for tank sealing…Leveled the back of the crankcase, New Venturi gasket made from a piece of soft fuel line, sewing thread gasket for the backplate/tank seal (castor oil holds these in good while reassembling), Q Tip fiber for tank screw gaskets…. New crankcase gasket soaked in oil…All that stuff really makes a difference on fuel draw and holding a needle setting…It also got a new glow head and gaskets….

It gave no trouble starting after rebuild…. Runs sloppy rich on 3-1/2 turns on the needle valve and leans out at 2-3/4….It could use some more clean up and polishing on the outside but I’ll leave it with its earned scars … At least for now…Maybe I’ll build something “safe” for it to fly in the future…

A lot of effort for one small little engine that could have been easily disguarded but I’ve enjoyed the ride along the way and it has been worthwhile ….Thank you all, And especially Jim…I hope he will share how he was able to straighten the cylinder…

Hey man that is Great ! To save a PeeWee

To straighten the bent Pee Wee two mandrels were fabricated from 7/16 cold rolled bar. The one for the lower end of the cylinder about 0.302" and a second one for the top about 0.300" as per Cox specs. There is a slight taper from top to bottom on this vintage cylinder. I had mentioned holding the cylinder by the bottom and tapping it with a plastic hammer, but the reality was that the cylinder could be bent by pushing on with my bare fingers. The metal is quite soft. A dial indicator can be used to check runout, but with the repaired cylinder the indicator wasn't exactly nulled, but the bore was now concentric from top to bottom.

If I had to do this job again, I would use a long mandrel (it's included in the picture above) that would allow even more precise tweaking of the bend. I thought of this after the cylinder was straightened so I figured I'd throw one in.

There was no need to heat the cylinder, the adjustment was done with the cylinder at room temperature.

Should anyone else have a similar problem, I'd be willing to do this again (for free, hey you can't beat that!).

To me it was a real thrill to help get this old engine running again. I've used Pee Wee's for over 60 years and still love them.

Great work and what this forum is all about.

Great work Jim. Thanks for taking the time and effort to repair it properly.

Also hats off to you Robert for not taking the easy road. I would have changed out the cylinder and tossed the old one, but you took the road less travelled.

This is awesome! I'd say one of the best engine saves on the forum yet, and we've seen some doozies. A cylinder most people would consider a total loss and likely just pitch in the trash is singing once again. You can have a rare Strato Bug or mint condition NIB RR-1, but these repaired engines are often the gem in a collection, they have a story to tell. Nice save Robert and Jim!
_________________
-Jacob 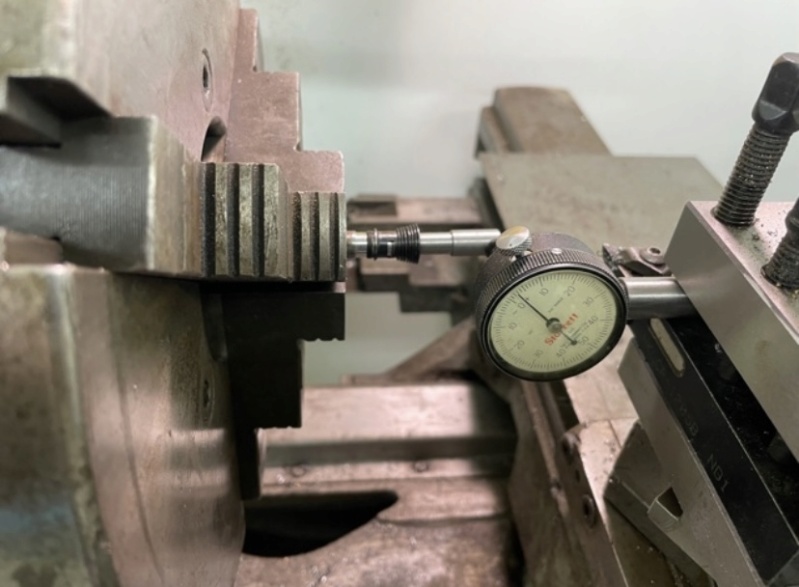 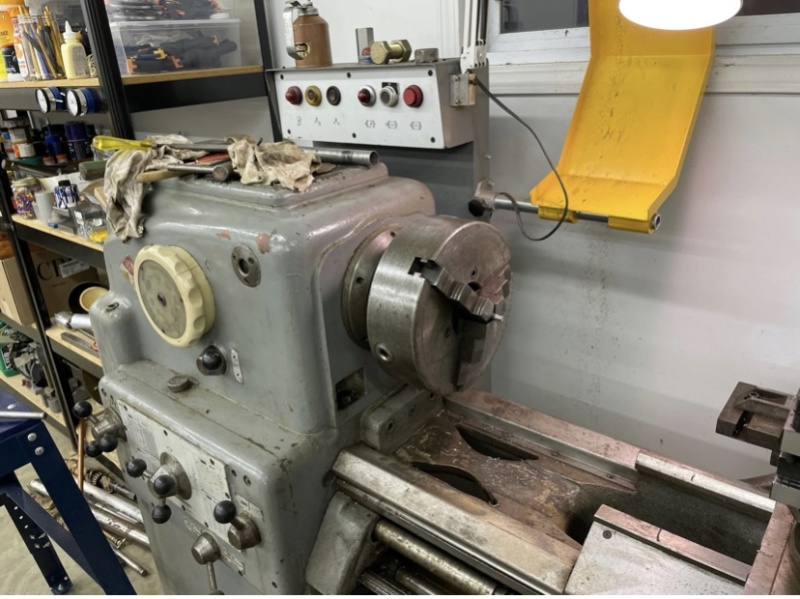 I hope Jim doesn’t mind me sharing these….. He sent them to me while it was in surgery….

Ran it a couple more times this afternoon…. It runs about 90 sec which I think is about normal for a Pee Wee…. 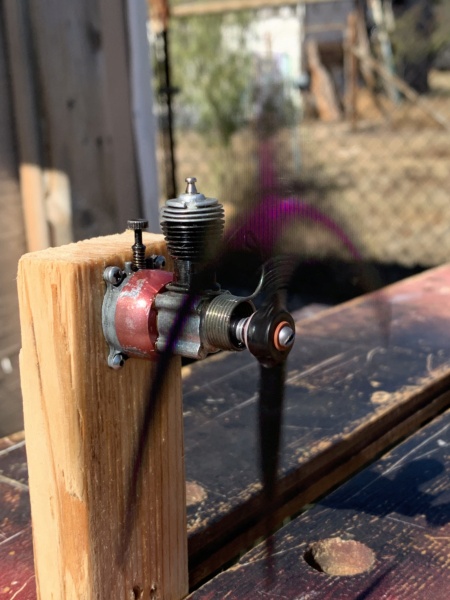 Wow, thats an awesome piece of work. What some of you blokes can do with equipment amazes me. All that I could do with a lathe at school was make a big piece of metal become smaller.

Its a genuine set of skills I admire and wish I had the ability to do! Its just one of those things I just cant do. Lol.

I thought you all had absolutely no hope of saving that cylinder and were all kidding yourselves!! Im very glad I just followed the thread, kept my mouth shut, and learnt something.

And Its great you have all shared so much of the thoughts and ideas on how to do it. Made great reading and learning for me. Thanks you all.

Nice one, warms the heart, good to see another one saved.

Nice tips about tank/back plate caulking and tank screw "sealer"...I have that fun to come.