Sometimes you get lucky and find some nice engines : 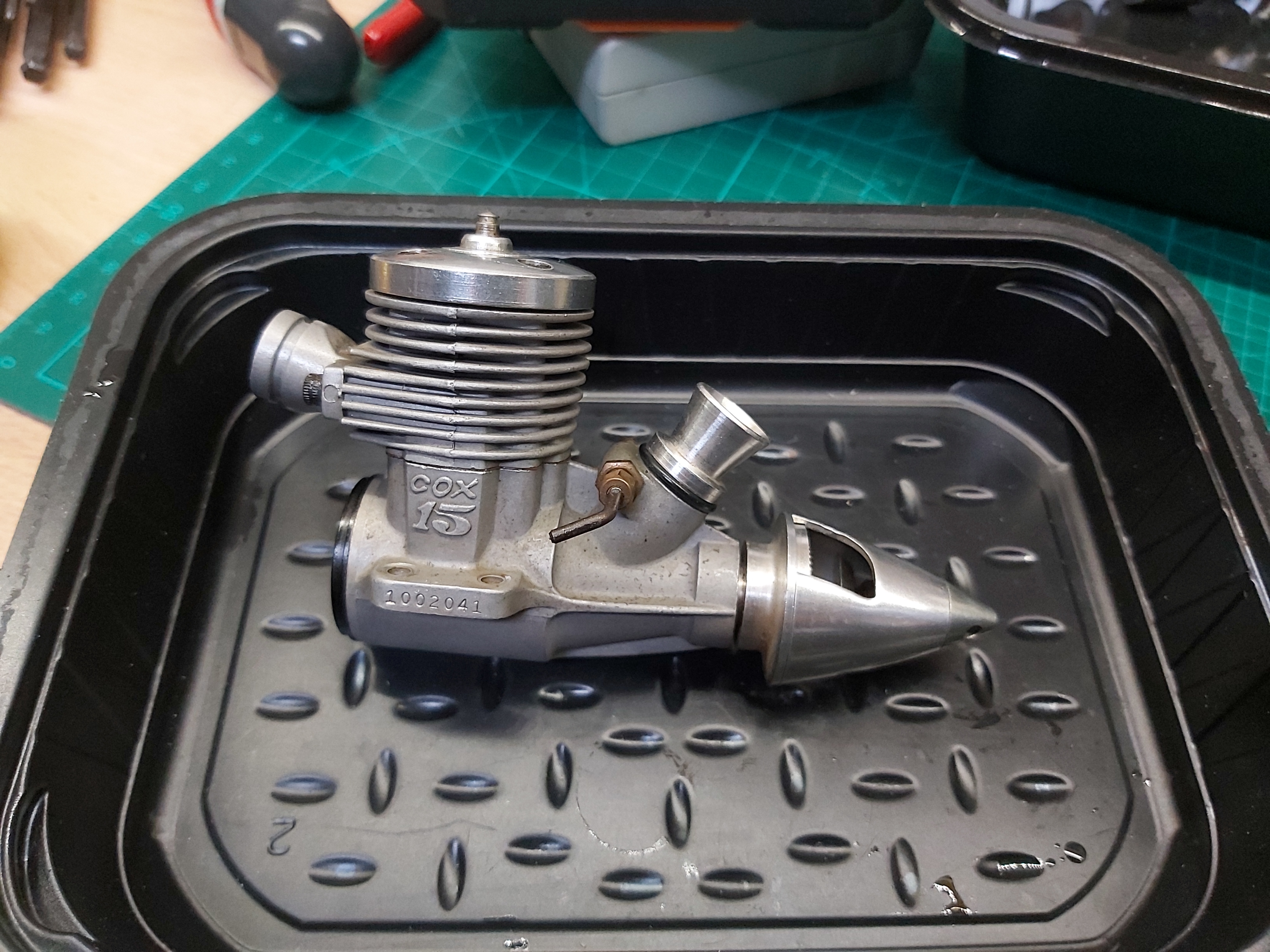 Came with a mount, but no paper/box. This engine have been run. 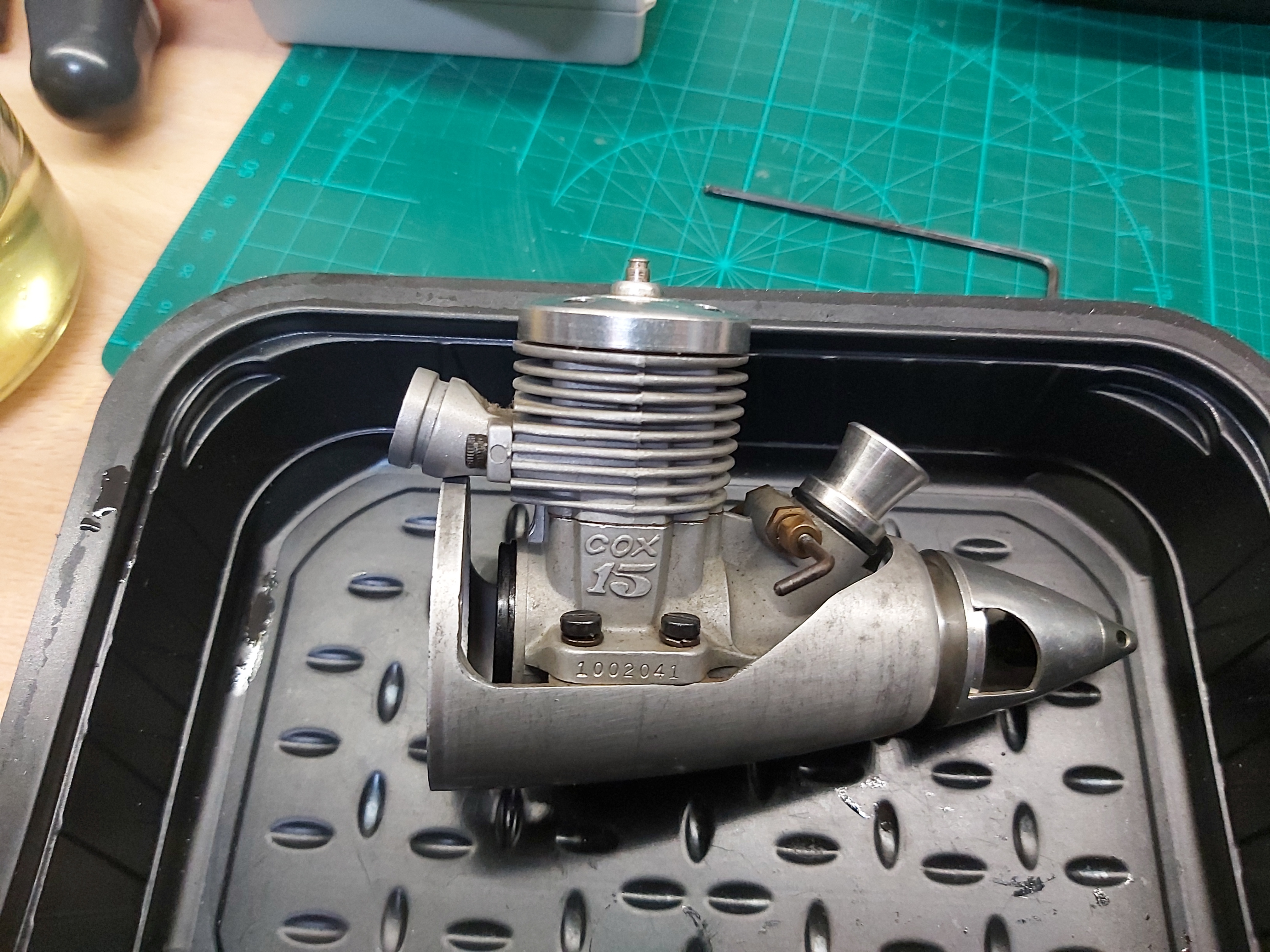 Is this thing worth anything ?

Yes it has a reasonable value-that one is a K&B manufactured Cox Conquest (identifiable as such by the serial number stam ped on the lug)-and the brass case gaskets. The FF radial mounting pan appears to be a Super Tigre unit originally intended for the G15.Ebay will give you a reasonable indication of current value -along with some ridiculously over optimistic asking prices-these are not after all scarce engines-and currently still manufactured by MECOA. timewise yours probably dates to the 1980s-the original Cox manufactured one first appeared in 1976, then was manufactured in turn by K&B, and finally, by RJL which is under the MECOA umbrella of engine families...

Well that's interesting since i don't have one good to know about the ser. no. Do you have antmore facts on it's changes Chris ?

Yes-a very quick potted history-Cox originally manufactured them in several versions, FF, CL, RC-earlier on there were differently timed cylinder assemblies depending on model type. Quite a few innovative design ideas-some a blatant copy from the Australian Taipan 15 of 1973. Crankshaft used a tapered gas passage and tungsten weights in the crankweb to improve the balance FF and CL versions differ inasmuch as the FF one has a spinner assembly, the CL one a normal prop driveer. Pistons were sintered iron-and gave problems, also the cover on the crankshaft could let go-generally with catastrophic results for the P'L assembly. The upper and lower case sections were sealed by use of paper gaskets, and either an insert head or a standard 1/4-32 plug head was used-the latter generally for R/C and C/L use. Case a smooth matt finish and no serial numbers.

Leisure Dynamics acquired both Cox and K&B (I do not know in what order and in what details they came under the corporate setup) but K&B took over production of the Conquest-and in the process dropped production of their own own 15 schneurle rear drum design. The K&B one used bar stock pistons (Cox may have also at the later stage of Cox production) and the crankcase sealing gaskets were brass or copper-and a slightly different texture to the case finish-along with a serial number stamped on the lug. Internally K&B used a different rear bearing-so bearings cannot interchange between a Cox case and a K&B case-or to put it another way-you need to know which case you have if ordering a new rear bearing.

Subsequently Randy Linsalato acquired the rights to the engine-presumably BEFORE he acquired the rights to all of K&B and continued to produce the engine under his RJL engine brand-under which designation you will still find it on the Mecoa website. The crankcase die has been changed and now reads 'RJL C15 ' on the left side of the case transfer bulge and 'MADE IN USA' on the right. The case material is slightly rougher in texture and more silvery.

So all three manufacturers' versions are readily identifiable.

Thank You Chris , that helps if looking for one to purchase .

So, looking at the serial number and copper gasket between cylinder and crankcase, I assume mine is a K&B version. But is it a CL or FF ?

Thank you for explanation about the crankshaft, at first sight it look like it's not balanced at all (just a round web !)

Grosvince wrote:So, looking at the serial number and copper gasket between cylinder and crankcase, I assume mine is a K&B version. But is it a CL or FF ?

Thank you for explanation about the crankshaft, at first sight it look like it's not balanced at all (just a round web !)

(i) Its the FF version, [other than the prop driver, internally there is no difference twixt the FF and CL versions, unless your usage is such that a 1/4-32 glowplug is required-in which case you will have a finned head, not the smooth one used with the glow buttons], and

(ii) the crankshaft has a reasonably thick circular crankweb. Drilled into the front face of the crankweb are three blind holes for the tungsten balance weights-which are located (obviously) on the diametrically opposite side to the crankpin. In turn the entire assembly is covered by a thin aluminium cup-which extends over the front face of the crankweb, and around the periphery of the web to keep the weights in position. This cup can fail in use-I've experienced it personally-and believe me the engine stops running REAL fast when it happens! In my case I was lucky and the fragments were mainly too large to cause any cylinder damage-other than blowing an insert plug. other things that gave problems were the early pistons, the conrods and the crankpins-but these failures are most often associated with the Cox manufactured version. These after all are not sport engines-they were racing engines and pushed hard-under those circumstances, parts will fail-and the Conquest was no exception.

What it did do was give the US modeller (and others) a cheaper, made in the USA homegrown alternative to the Rossi 15, which was well supported with parts and service-a valid criticism of the Rossi, and most of the time came close to the Rossi's performance with a bit of massaging. A few enterprising individuals found they went even better with a Rossi P/L fitted.....and over the years ABC P/L options have been periodically offered. Of course the appearance of the Nelson 15 in the early 80s put paid to the top level careers of both the Rossi and the Conquest...

Similar topics
» Cox Stocker from the beginning (killer bee engine)
» Where can I find......
» Ooh! Ooh, ooh! What'll I find?
» You never know what you might find!
» Friend happydad, this is for you.