Someone on the big auction site has an OK Cub .049A for sale at $125.00. Is the guy absolutely bat barf raving nuts??? It's one of the ones they assembled from left over parts about fifteen years ago, stuck in a plastic bag with a prop and a decal set, and sold for about $16.95. I have one, and assume its value to be about what I paid for it. Which is the more accurate price?

If someone buys it on feebay then it's worth $125!

Lots of that going on on eBay. There was a babe bee bid up to $32 last night and it had a few days left.

lol, it would be worth that to the guy buying it! I used to look at sales for the more collectable stuff and you could see where the bulk of the bidding was and gave you a better idea of values.

@TheotherGeoff wrote:Someone on the big auction site has an OK Cub .049A for sale at $125.00. Is the guy absolutely bat barf raving nuts??? It's one of the ones they assembled from left over parts about fifteen years ago, stuck in a plastic bag with a prop and a decal set, and sold for about $16.95. I have one, and assume its value to be about what I paid for it. Which is the more accurate price?

I bought 3 of the OK Cub engines when they were offered for sale. I have run one engine and the other 2 are still in their bags.Not for sale,now part of my collection.

One determining factor is engine size. Many of the larger sizes were just not that common. The .19 for instance is not one that you come across a lot of. Some of the smaller mills are not as common as well. While I'm not overly impressed with their performance at times, I'm quite fond of my OK .149. That was another unpopular size. The .149 has reasonable performance for that era engine but it has a deafening exhaust note. Ken

If one wants the performance of an OK Cub .049 for model aircraft of the late 1940's to early 1950's that used them, could put a glow plug head adapter on a Sure Start to drop RPM down to OK Cub levels.

That may sound far fetched, but to the person wanting to mimic flight characteristics of the earlier engines without putting wear and tear on a vintage motor, may be viable.

Here is a comparison of the various .049 level engines based on various engine tests. 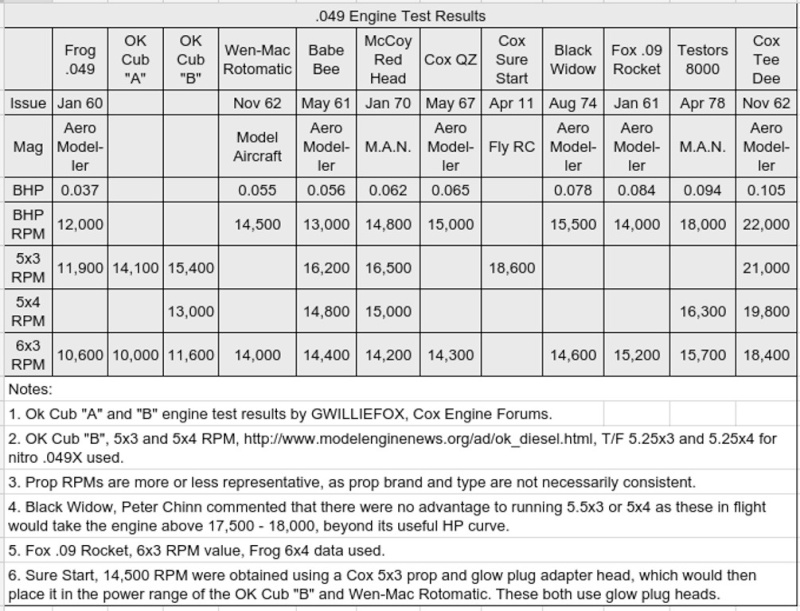 Those interested in a new OK Cub .049 may want to contact the manufacturer. Their prices are considerably cheaper than that E-Bay listing. I heard that they were discontinuing engine sales some time in near future. Thus, it would be worthwhile to contact them ASAP. http://www.okengines.com/main.shtml

that's interesting George , I didn't know they were still in business / have you there catalog ? I see they warranty there airplane engines for a year even if you crash it and tear it up . WOW

No Eric, I haven't contacted them yet. I've got both an "A" and "B" and that is enough for me. Just thought that if anyone was contemplating, their better bet is getting a new one at reasonable cost instead of taking your chances used through an auction.

You'd still be taking a chance, the "new" engines are assembled from parts made in the early 60's. I'd rather roll the dice and buy one that looks like new and hope the piston/cylinder fit is better then to buy new that may not be "fitted" as well, come to think of it many of the Cub engines are hit or miss regardless of when it was assembled.

You bring up an interesting point, Mark. I didn't realize that there were really QA issues with the OK's. That said, I'm thinking one would be better off downsizing a Sure Start with a glow plug head if they need an engine with the power output of the OK Cub .049's. Anyway, I've got 2, an "A" that has decent compression, a "B" that barely has compression.

Ted tells me that they will be trading until the end of this year and there are lots of parts and engines left, well at least there were a few months ago when we last communicated. Prices are very reasonable, so if you wanted an engine it would be worth buying another cylinder and a few extra pistons and find the best fit yourself. I had an .099 with poor compression and wouldn't run. New cylinders were not available, but pistons were. Ted went through a few pistons for me and found the largest he could, I fitted it and the engine runs great. If you're after a better performing engine, see if they still have any of the reed valve .049s or .06s with the glow head. They are a far better engine than the FRV ones. I think they are about $30 new.

yep, the .060 reedies were probably the best of the lot and you can use a Cox glowhead on it.

Quality control seemed to be a problem for a lot of companies, McCoy, Wen-Mac, Cubs, etc. (this is where Cox took over the market) seems like the ones that fought for market share with low prices suffered the most. Some of the early Wen-Macs with the groove around inside cylinder by exhaust ports could be worn out after 1/2 dozen flights. I've had strong running Cubs go south real quick as well.

Mark. It's interesting that you mention both the .060 reedie and their quality control issues. I picked up an .060 a while back on ebay and was pretty pleased with the way it looked as it showed no sign of being knocked around, but was sold as used. Very clean and tidy plus excellent compression, plus a good glow head. But do you think that thing would fire up? No way. I'd get a burst on an exhaust prime but no fuel draw at all. Screwed the needle right out but couldn't get any fuel to draw. I suspected a faulty reed, but a quick dismantle showed no problems there. Checked the fuel passage & couldn't blow through the spray bar. Poked, prodded and blew, but no joy, so I gently eased the spray bar out of the plastic tank to find it had no hole drilled in the side of the brass tube to draw fuel through. Must have been made that way. Pulled the tube from a spare tank I had, assembled her up and off it went without hesitation. Runs equal to any Babe Bee I've run. Maybe it just missed a step in production, or maybe the rumours of sabotage by disgruntled employees are right. Anyway, I ended up with a great engine for little money.