A story in pictures. 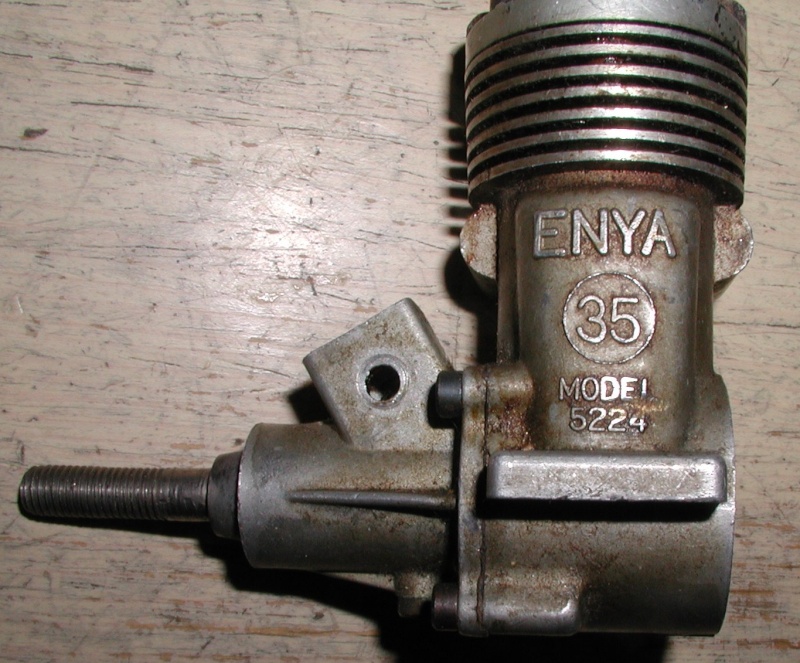 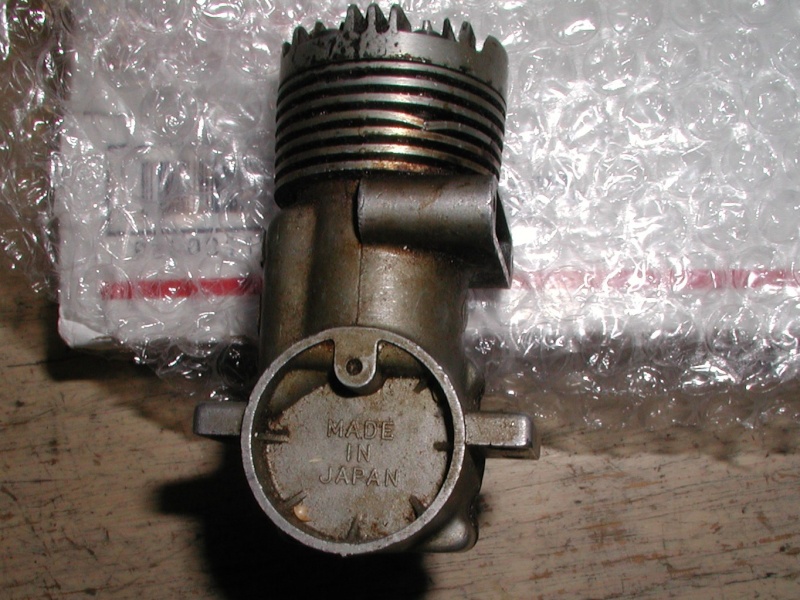 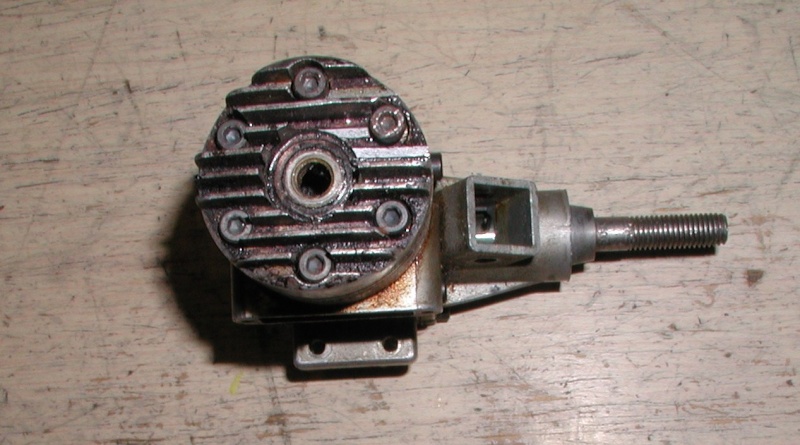 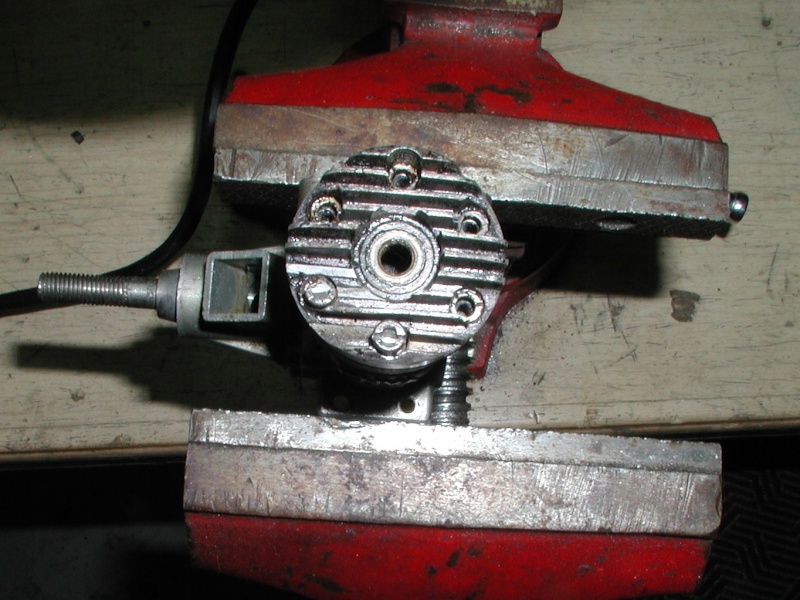 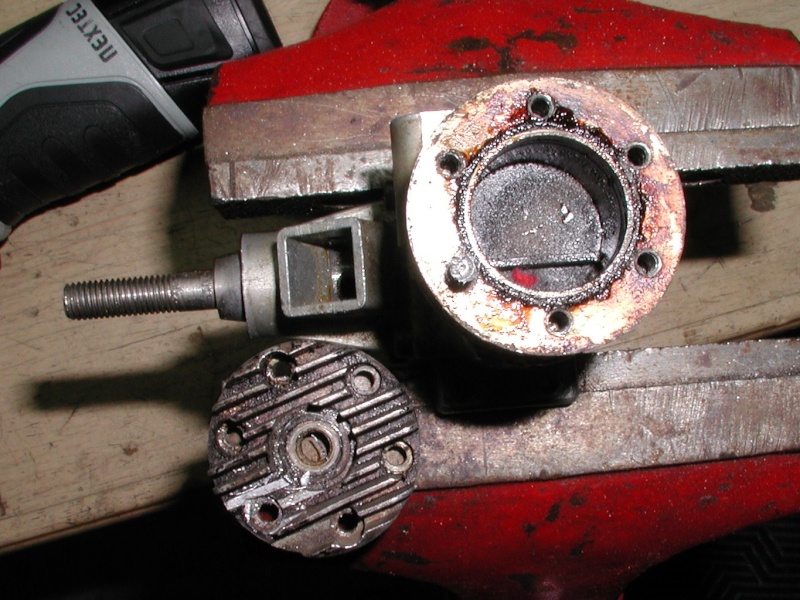 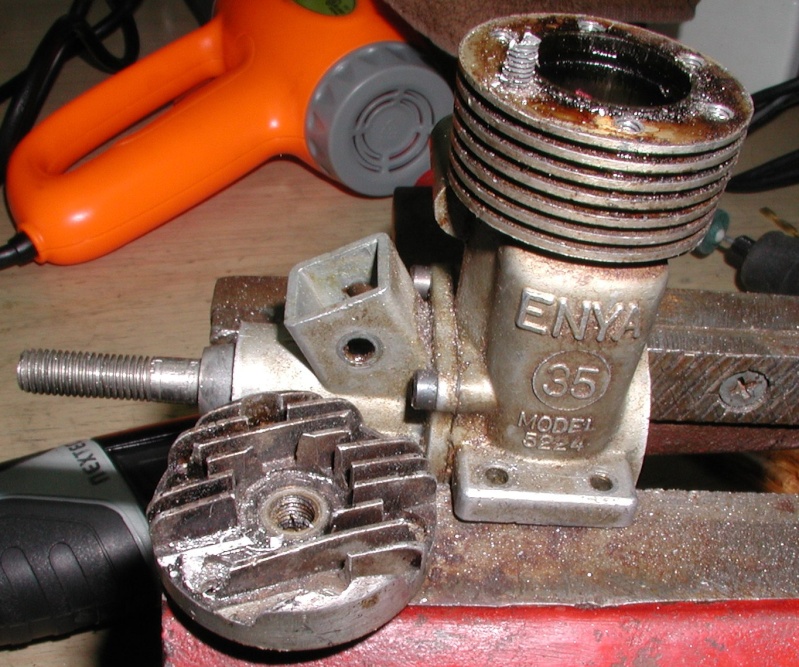 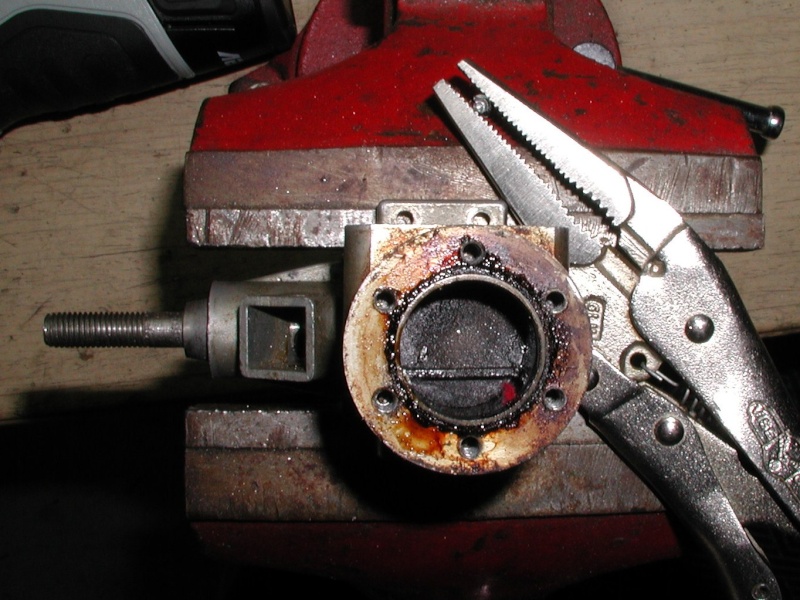 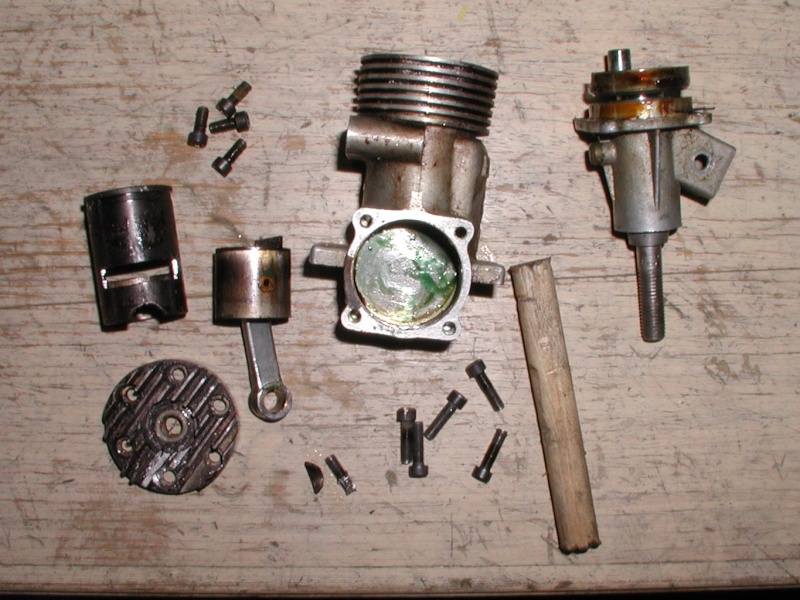 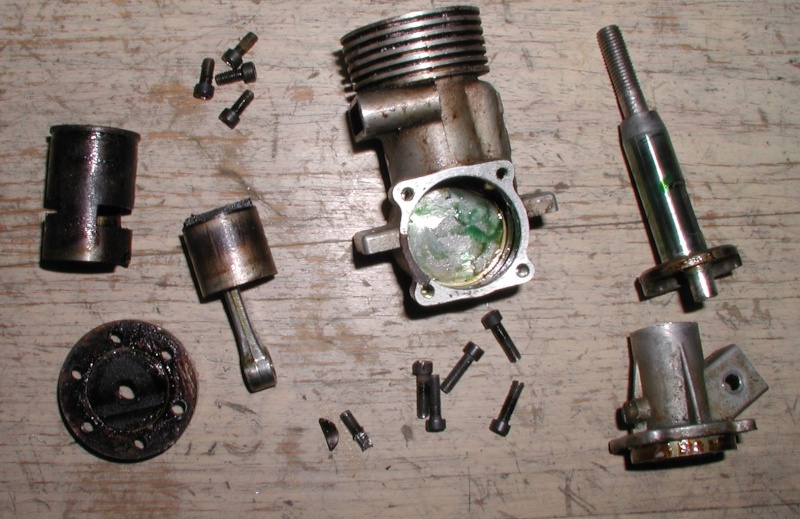 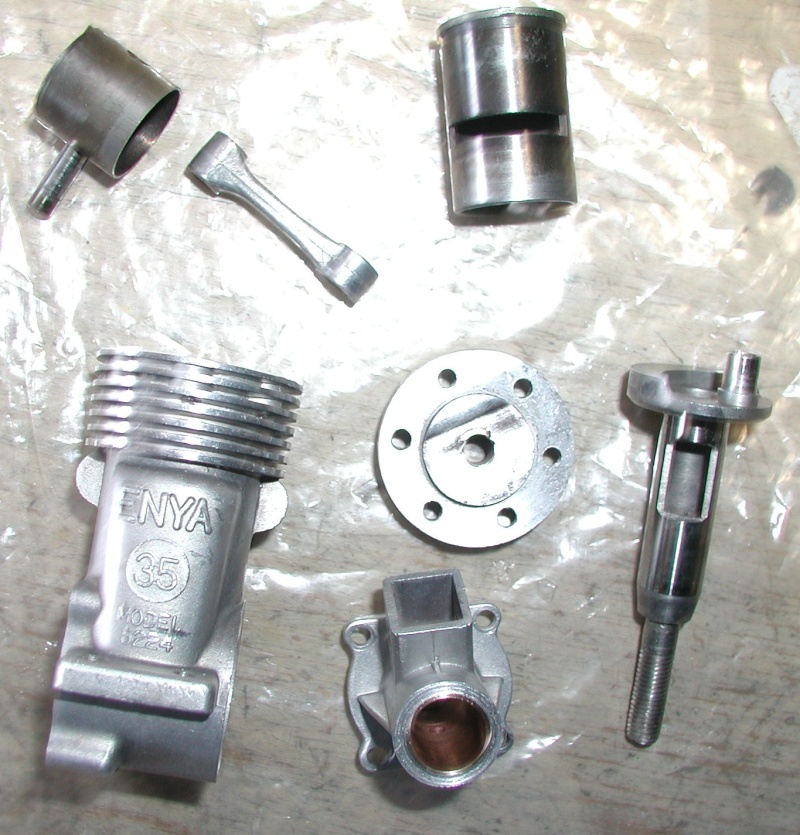 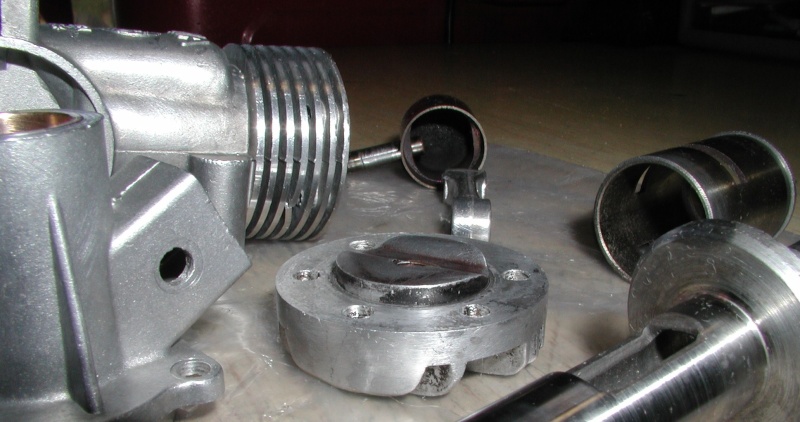 After robbing a NVA and propeller drive washer off another .35 I actually got the thing to run although not very well.  Notice the chip out of the cylinder liner which must have happened when I used a dowel on the connecting rod to pop the cylinder and piston out.  Not an engine that I would ever use on a plane. 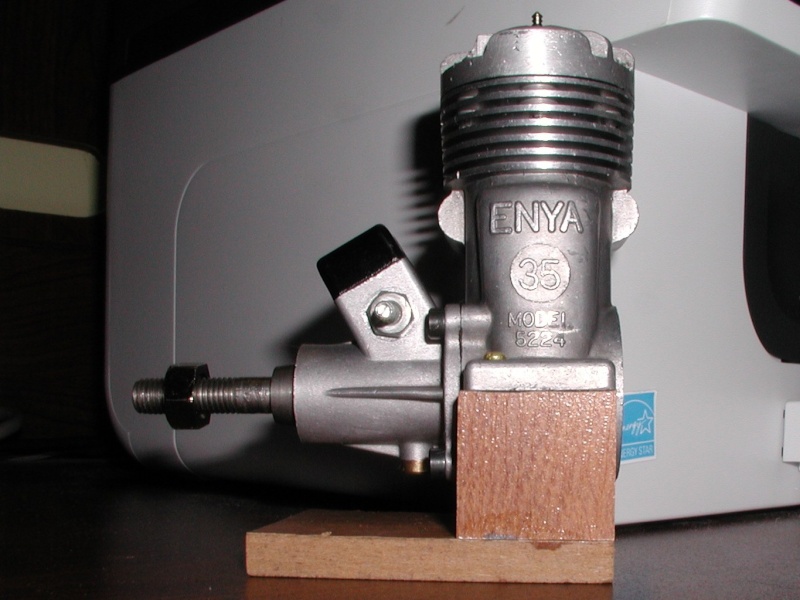 I have found that if you leave the corrupted top rim of the cylinder alone and use it to restrict the piston within the cylinder you can leverage the liner out by using a wooden dowel on the bottom of the connecting rod.  This one came out grudgingly, took many applications of heat and burned hands to remove it.  In the past I have removed that rim with oil and steel wool then just pop the piston out leaving the liner in place.

Also notice the wear on the left side of the piston pin.  This $9.99 engine is perhaps the worst I have ever seen.  But still a lot of fun to get running again.  I have parts coming to complete it.

BTW, the vise is not [bleep] up, just enough to lightly hold the case.  I used a dremel to cut a slot in one screw (Most of the hex head screws were rounded out and were the wrong size to begin with) and removed it with a screwdriver, the last one split so I had to drill the head off.

Everything got one final dump in the crock pot, this time with a dish washing detergent and boiled.  You wouldn't believe the stuff that came out of it even though it looked spic and span.  Just when you think you have them clean, ya don't.

Maybe I just spelled it [bleep] in my original text....

More edit... Yup, you can't spell cinched with an h as the second letter....

Enya Bob to the rescue , that engine has been ran hard and put up wet , a lot of tarnish of gum there its is amazing what you can do to bring one back from the dead . Good Job on the Clean up (Restoration) they can really be a challenge when the castor sets up like that ! Eric

Bob -
What a great restore. Bringing an old engine back to life is truly a love of labor, even if it is down on power. Slimy to shiny -- congrats on an excellent job.
andrew

Nice job Bob. Preserving history, one engine at a time.
Thanks for sharing your work.
Bob

Great restore, Bob on that square throat Enya. All you need now is a prop hub and washer to complete, you've got quite a collection going.

I have replacement parts coming, perhaps I should have ordered that cylinder liner too, but I didn't.

The reason it might have not run great may be because I was using a .29 black plastic venturi insert instead of a .35 but I think they are the same, it fit well but I did't have a square gasket either for a good seal.

I just wanted to see if I could get the darn thing to run using everything that came on it. Once I get the new NVA, washers, and piston pin it should run better.

When I stepped up from .049s to .35 sized airplanes, all my paper route would support was the McCoy .35s and since my dad gave me his spark ignition McCoy .35 I was familiar with them.

I got my first Fox .35 stunt for a third place in some local competition and later got an Enya 5224 same way

Back then I don't recall ever doing other than what the manufacturer printed in the instructions...I mean we did not know squat about nitro, oil, and percentages and I know we abused a lot of the engines....


Point being... My store bought McCoys and prize win Fox's bit the dust ...probably from wrong fuel and stupid kid leaning them out too much....The ENYA's took the abuse and I still have them and they both seem to be barely broken in

BTW the Fox was light, the McCoy heavier, and the Enya was a pig at 7.9 Oz so I had to be creative balancing my combat planes..... sinking the motor closer to the LE lengthening the booms or bigger stabilator

Looking at the liner I can't see how it would affect the way it runs. If it were closer to one of the ports maybe.

Dumb question, but you did put the liner back in correctly? I know you are an old pro, sometimes mistakes happen though.

Steller job on the rebuild.

You may find that running it using all-castor fuel will restore the castor seal and bring back some compression. You might rethink not using it in a plane after that.

Looking at the liner I can't see how it would affect the way it runs. If it were closer to one of the ports maybe.

Dumb question, but you did put the liner back in correctly? I know you are an old pro, sometimes mistakes happen though.

Steller job on the rebuild.

Yeah, 11th commandment "High port goes to exhaust" Ken schooled me on that a long time ago.

But I always peek in just to see I have it right after assembly.

That is a long cylinder liner.  After heat gun heating I got it 1/2" out using the dowel on the con rod, then it stopped.  Reheat and got it half way out, then tried to twist it out the rest of the way, always works, not this time.  I usually spray a little Remoil on the piston cooling and contracting it, Didn't work either.  More heat, got it 90% of the way out, stuck again.  More heat, burned hands, twist, got it out.  Painful experience.

Sand blasted the whole case inside and out, massive amounts of crap in there.  The liner had burned in material inside and out but a lot of fine steel wool and cutting oil removed it.  I never sandblast the liner or piston for obvious reasons.

I smoothed the inside of the case where the liner fits with used 400 grit paper used wet after the sandblasting and the liner slipped back in nicely allowing rotating for proper port alignment.

George, right now all I have is 20% nitro fuel with added castor.  After I get it running right I will add a little more castor and run a couple of sloppy tanks through it.   I tried to buy some SIG 5% nitro but they only supply it in gallon sizes which causes high hazardous material shipping charges.  I'm looking locally.

Edit add... BTW, I can't live without a heat gun. I have already burned out one of the cheap Harbor Freight guns and robbed my son's as a replacement (Orange gun in a picture above). Since, I have bought two more HF guns, on sale for $8.99 apiece. It has replaced the toaster oven and to a large degree the A/F crock pot boiling procedure. But remember, I tend to buy other peoples junk and in some cases, very stupidly try to resurrect them.