Hey guys, wondered if you could suggest an intermediate combat flyer CG point on this, not being on the plans. I'm setting it up for electric so we can do some urban lunch-time combat behind work.

Without talking to Phil himself, I don't know the differences between the Lil Hacker and the Hacker II. Is this a double kit? That maybe what the II represents. As far as the Hacker platform which is the ply parts in the kit, that makes the plane quite heavy. Seeing that I have no interest in electrics, I can't comment on the performance or the weight. I'm going with the simple fact that it's going to be a bit heavier than the nitro variants. Even with a Norvel on the nose a stock built Hacker can require 3/4- 1 oz. of nose weight. All of this is relative to your flying skills. A lot of weight can be removed from the Hacker without having to add weight which is exactly what you don't want to do. I had Phil cut me a new set of Hacker wrings recently with a wider wingspan. The Hacker's wings are quite narrow therefore keeping the weight down is critical because you have little wing area. I was able to core holes in the high point of the wing which I believe I had 3 holes on one side and 2 on the inboard using a heated Contadina tomatoe paste can. If memory serves me correctly I was able to reduce the weight by 9 grams coring the holes.

Where is the plane currently balancing? Where's your battery pack in relation to the wing and how is it being secured? For myself, I fly tail heavy and sometimes excessively tail heavy. I then narrow the line spacing on my handle to 1 3/4" and limit the elevator movement to less than 20 deg. I wouldn't recommend this to someone who's never flown one before. If the plane's nose is dropping when your fingertips are on the spars, the plane is nose heavy and I would fly it. I would then add tail weight from there if required. I found the Hacker to be quite tail heavy to start with with the nitro engines I elected to use  I use such as the Norvel .061's, AME.049's. To resolve this, I routed out lightening holes in the lite play fuse from the bellcrank to the tail. I then ditched his heavy hardware and stitched the elevator on using thread. I also trimmed the elevator a bit and rounded the tips of the elevator  fully to even reduce more weight. I wouldn't recommend rounding the wing tips of Hacker as Phil shows on the picture ( At least not initially) you need all the wing area there's to offer. The spars he provides don't fill the spar grooves all the way out to the wing tips which in my opinion is just a break waiting to occur and I replace with full length spars. The spars he uses are far too wide and not necessary so opt for lighter pieces. The ply shear web internally is also just adding more weight and is also not necessary. If this is your first attempt in doing so, build as the instructions show. Improvements can always be made later and if your flying combat, this is more than likely not going to be the first and only one your going to build.

Your electric motor and battery setup might just be the ticket though not requiring any change and possibly the direct opposite. Phil's instructions are certainly lacking and keep in mind that the plane was designed for the beginner in mind using a Black Widow for power. I highly recommend glassing your nose around the perimeter of the fuse box on the firewall. I have seen this depart more than once. Lightweight glass and epoxy is good insurance that this is going to stay put. Remove any charring prior to epoxy . Stunthangar offers some threads in regards to the Lil Hacker but not so much as to what your in search of. A picture of your model could certainly help clarify things. Ken

This is the back page of the included instructions. You can see the CG is marked in the profile view, but there is no dimensions given. It is some nebulous location about halfway between the LE and spar at the fuselage.

I hope this helps some 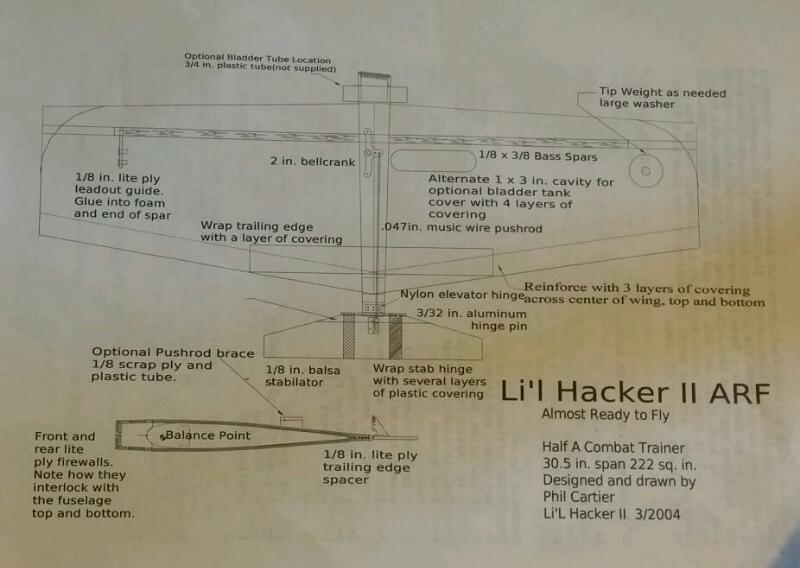 Thanks for all the info.  I completely missed the CG reference, woops, thanks for pointing that out.  Sounds like I'll be putting the battery up front of the spar somewhere.

I haven't laid out the electronics yet, I've yet the wing to cover.  I was going to wait on lightening things until I've seen a few crash effects, and already finished the fuse.  This is a double kit, but believe it's been modified since the Hacker I.  It comes with glass for the front, and parts are laser cut.  Taking me a day to build this first one.  I like the way it looks without cutting the wing tips, hoping the covering material I chose will keep them strong enough (Towerkote, seems to work great on foam).

The layered covering in the trailing edge of the center section is the key to the lifespan of this model. Equally important is the covering up the trailing edge. This allows you to iron a warp or dial a warp into the trailing edge in the event it's required to make the plane fly correctly.Phil's SLC covering provides great strength here. Cover over with Towercote afterwards.  If your wing fits nice and tight in the fuse box structure, I wouldn't go crazy with adhesive. Just a few dots of Gorilla glue in the center is all that's required. In case of a mid air or a ground strike, the wing will just break free of the fuse keeping either or intact. My concern is how your retaining the battery in case of a ground strike. That's a bit of momentum moving forward.