I built my first steam engine kit Wilesco D100 E. It is an happiness... tug tug tug... then whirling sound!

I recommend that, first fit the boiler house onto base, then burner slide while assembly. Because tabs of boiler house fit over burner slide tabs, so boiler house don't fit to base if you fit burner slide first. Steam pipe gaskets are smaller and thinner than other gaskets supplied with kit. Place one small gasket inside of threaded bush on boiler house, as like as one or two to the other end of steam pipe on baffle plate. Operating the steam whistle is somewhat difficult due to heat. Baffle plate and cylinder must be fit slightly tight, otherwise steam escapes from between the baffle plate and cylinder. Yet I want to use soldering iron elements to heat the boiler instead of using fuel, I tried new WiTabs high efficient tablet fuel supplied with the kit at first run. Two tablets supplied with kit, Wilesco steam oil, screwdriver and a wrench. I used one WiTabs tablet and it gave about 5 minutes run. A small breadboard - protoboard- for electronic experiments, a bag of electronic components, a dynamo with mounting supports and one spiral belt supplied with the kit. I placed a rubber mat under the base to prevent vibration. Wilesco D100 E kit is a very good value for beginners whom want to made his own steam engine without machining. The fuel tablets were troublesome to obtain in the early sixties.  My dad got me a can of Sterno cooking fuel, it is an alcohol gel, I believe.  I would cut a small cube and it would run on that for a good, long time.  I finally wore out the piston rod on mine.

Hi John. Esbit fuel here-
https://www.amazon.com/Esbit-Solid-Tablets-Camping-Starter/dp/B01FDO05GG/ref=sr_1_2?ie=UTF8&qid=1519957021&sr=8-2&keywords=esbit+fuel+tablets
I had a Jensen steam engine several decades ago.
Lots of fun.
Makes me remember how many smells that were associated with different hobbies.
Everything from hamsters to model rockets.
Bob

A chemistry set was also a good way to make different kinds of smells. One time I cleared the house on a cold night with sulfur and candle wax heated in a test tube.

@Forgetful John wrote:A chemistry set was also a good way to make different kinds of smells.  One time I cleared the house on a cold night with sulfur and candle wax heated in a test tube.

Here's a video game the whipper snappers are playing:
https://rust.facepunch.com/

what every kids wants, a radioactive chemistry set:
https://en.wikipedia.org/wiki/Gilbert_U-238_Atomic_Energy_Laboratory

Here is one for sale:

Back in the mid sixties when I was about ten years old a man called in to see my Dad about some motorbike stuff . He asked me if I liked steam engines as my Dad also has a traction engine at the time. He said he had a model one and I could have it if I wanted it. Of course I said yes please. My Dad said not to get my hopes up but a few days later this little Mamod engine turned up. 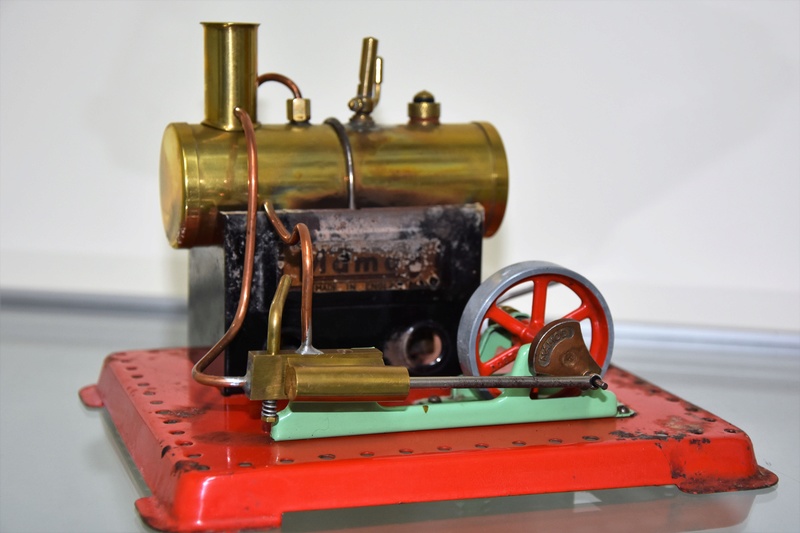 I had seen them in magazines and the like but they were expensive even back then, definitely more than the average 10 year old could afford. It needed a bit of re-soldering here and there but it was like Christmas for me.
I showed it to my son, (who is coming up twenty-one soon), when he was about ten. I put some methylated spirits (up North I think you call it de-natured alcohol) in the burner and some water in the boiler and fired it up. It soon was chuffing away and I tooted the whistle then turned to him and asked “what do you think of that”? He just looked at me and replied “Is that all it does”. I just shook my head, watched it until it ran out of meths and then put it back in the cabinet.

I have a Mamod which my mum gave to my dad as his 21st birthday present.  I treasure that thing, although playing with it as a kid I'm surprised I didn't destroy it.  I used to make all sorts of things out of Meccano (erector set for the non-colonials) for it to drive.  Even set it on wheels to be self-propelled.  Jolly dangerous though.  Rock it around too much with a full spirit burner and the whole thing would go up in flames.

I remember seeing model steam-engine kits at "Eric Fuchs Hobbies" where I used to buy my Aero-Gloss back in the day. I always marveled at them.

RE: Davenz13; It seems that the majority of young people today have no mechanical sense or interest at all.. unless they're into working on cars.

Smelling is an interesting fact in modelling hobby. I always remember my childhood modelling days when I use cellulose dope and adhesive.