So today while going through a bunch of old magazines I saw a few good ads and scanned them into my computer. My dad found these in his attic and wanted them gone, and I have nowhere for them either. So off they will go, but hopefully someone locally wants to pick them up and I do not have to toss them. These scans are from Model Airplane News in 1959, 1960, 1967, and 1968. Hope you all enjoy. There are a few other scans I will not post here, but in Cox Engines, as the rest are Cox advertising scans.

Copied and changed accordingly to suit the topic here. 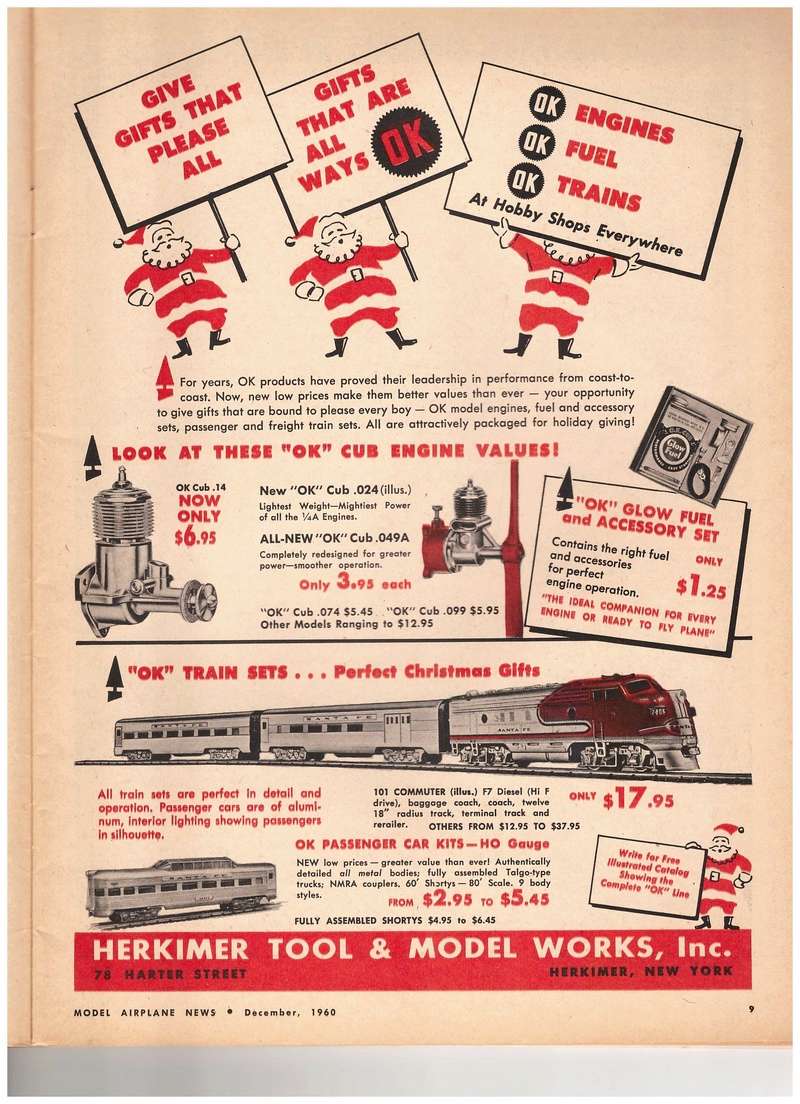 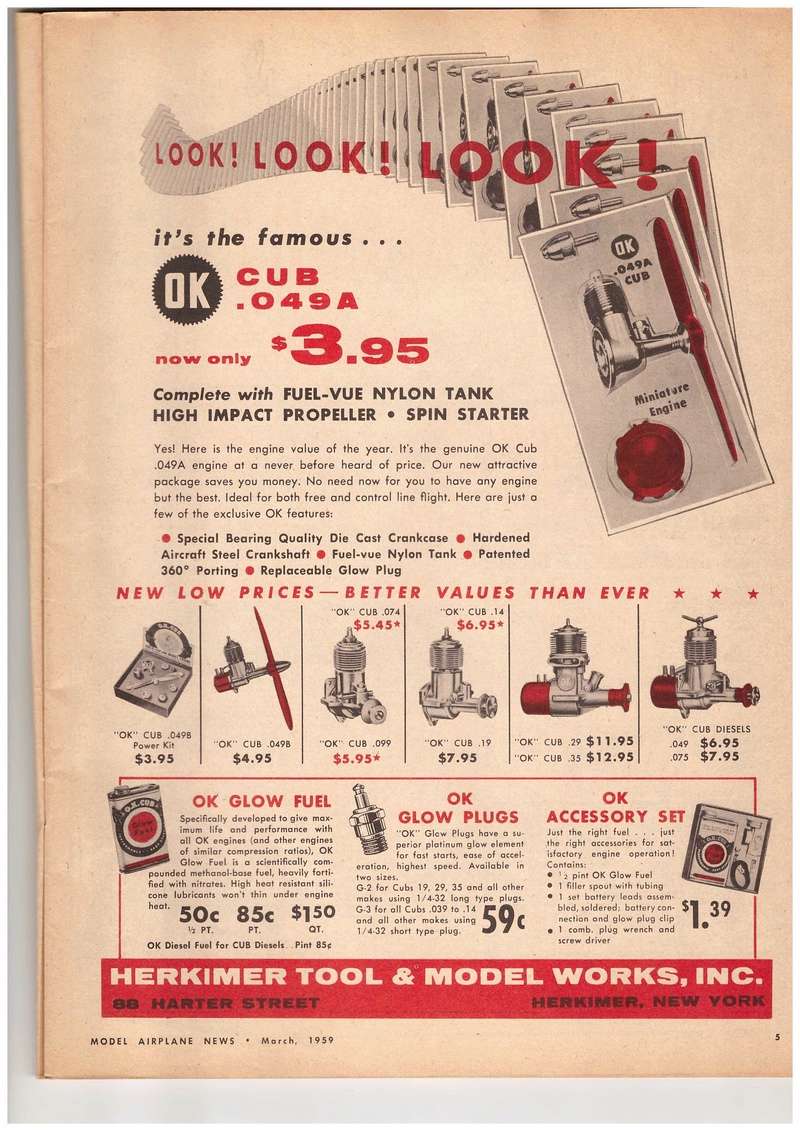 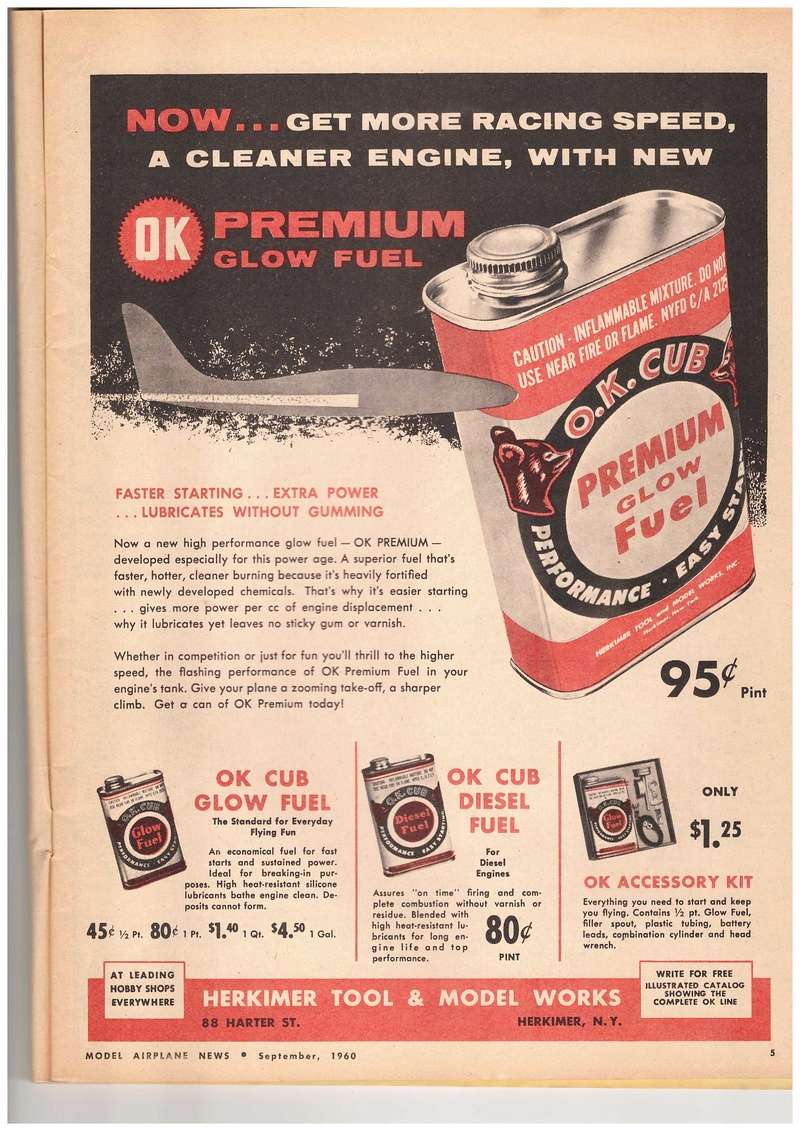 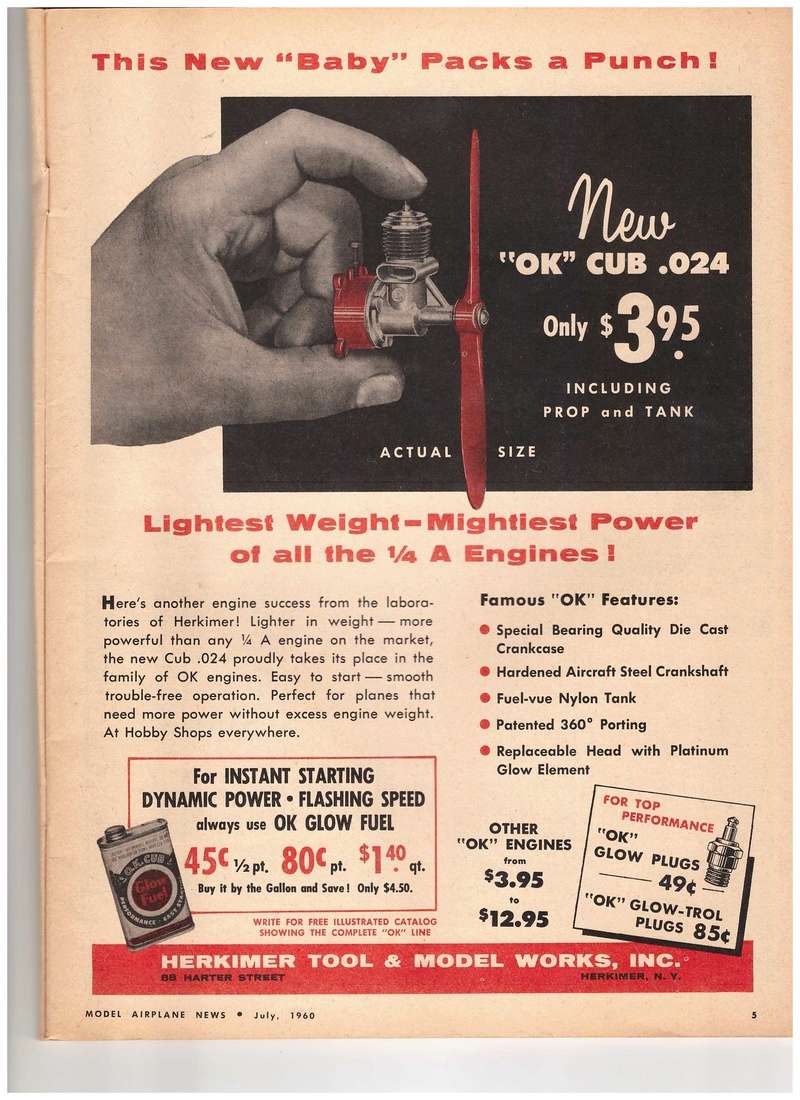 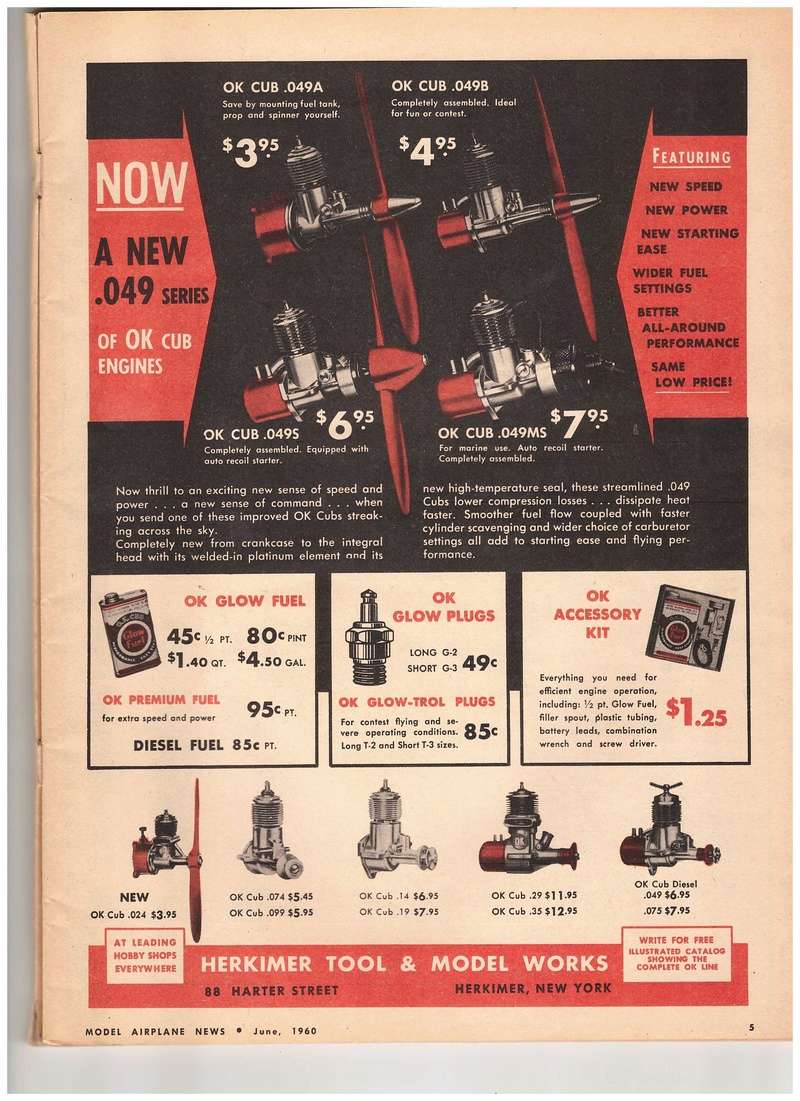 States in the Cub .024 ad "More powerful than any 1/4 A engine on the market".
Well, what was it up against? The only other engine I can think of for that era is probably the Torpedo Infant.
Pretty easy to make such a claim when there's virtually no competition. While I'm very fond of Cubs, from all reports you did well to get one of the .024s which would actually run.

lol, i guess 'back-in-the-day' you could claim anything you wanted, i guess 'cause it was .004 cu. in. larger than the Peewee .020, it should put out more power even with the heavy flywheel needed just to stay running.

Didn't realise the Pee Wee was around back then. Thought Cox came a bit later than the Cubs.

Now, after reading things I scanned and posted, I have a question. All I ever hear about is the old Cox fuel, and its formulas. Has anyone here ever used the OK brand fuel, and if so, how did it work. Being that these were not as 'peppy' as a Cox engine, would anyone happen to know or remember what this fuel was at in terms of nitro, and oil in percentage? I am assuming whatever oil content is in it is all castor.

One can see why that although Herkimers were nice products, by the early 1960's they were being quickly outdid by Cox. Babe Bee went for $3.95 retail, but in 1964 in the Keesler AFB, Biloxi, MS, I gather that Service Squadron Model Airplane Hobby Shop on base was selling them for a touch above wholesale for the military community, roughly half that. I remember as an 11 YO looking at Scientific kits, what sticker price was and what suggested retail was on the box. You could get a hollow log kit for a little over a buck.

Cox was more powerful for the same cost or less, and wasn't hard to see why Cox took over. Nearly all the .049's except Testors - Wen Mac) from other companies dropped by the way side by 1970.

According to Ted awhile back, one of the Cubs fuel formula was made to 22% Castor oil and 20% Nitro. Hope this helps some.

Thanks. That is what I was looking for. Not for anything scientific, but rather to see if it was close to the Cox fuel formula, and see if it was a high castor content oil.

Thanks for those ads Chancey! I'm in the habit of saving those to my database.

Glad you enjoyed them.

There is probably more, as I have a bunch of magazines that I am trying to give away. As I was browsing through these quickly while packing them up these few ads popped up. These are what I have here if anyone wants something scanned:

Those scans are very interesting in that they yield a clue about the shift from glow plugs to glow heads for Cub .049s. Glow heads were apparently introduced to hobby distributors at the winter 1960 Chicago Hobby Show which would be consistent with a consumer intro in Model Airplane News in summer of 1960.

Later marketing in the 1980's of nostalgia Cub .049s, many with plugs and some with heads must be indicative of massive inventories of old parts (some significant numbers of production rejects also) in the Herkimer warehouse from way back when.

Typical kits back then for the Herkimer engines, here's a December 1954 Air Trails (forerunner of Flying Models mag) full page ad of 1/2-A Berkeley mainly free flight glow powered kits (although says you could rubber power or control line them - I think they are a little heavy framed for rubber and too lightly framed for CL 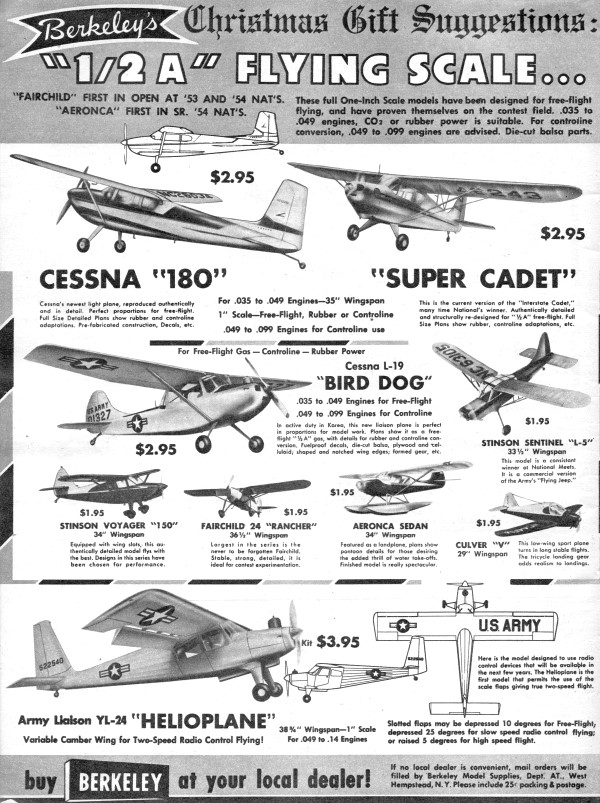 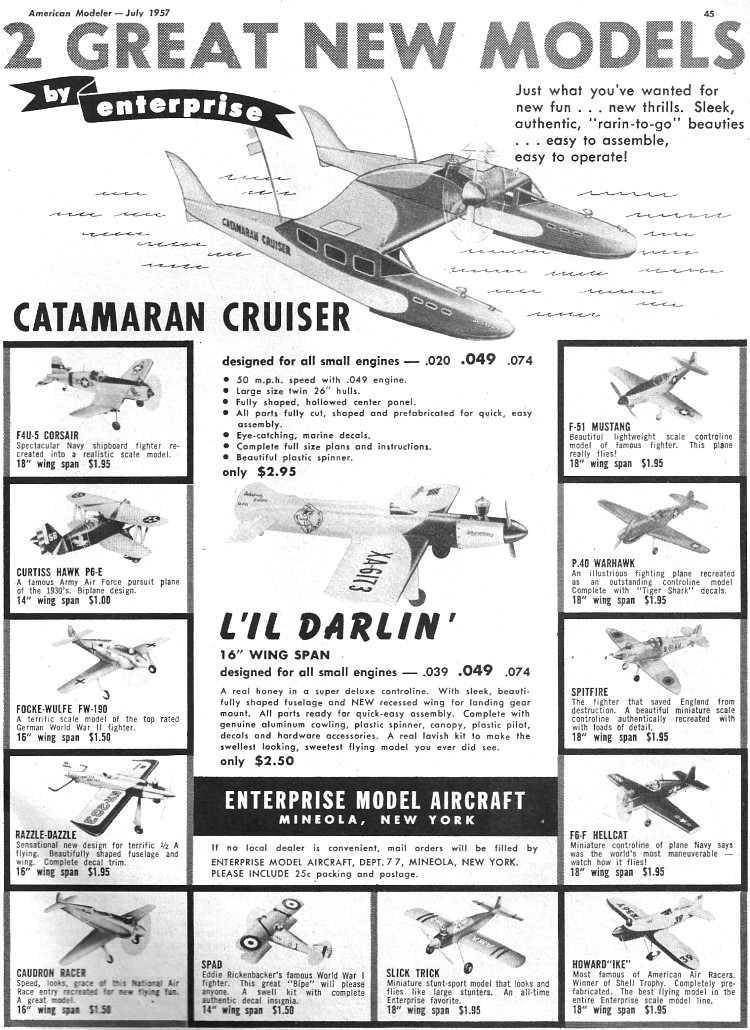 Wow, I would love that Catamaran Cruiser. Thanks for sharing.