I bought a webra 1.5cc from a friend recently for another generator project
he restores and collects engines his youtube

but to keep it clean I needed a exhaust on it
so I thought back to a unknown cox exhaust I bought that was bigger then a 049
I got it out of the part drawer.....
It was to high bit the internal size was correct
So I made it lower
Enlagerd one hole and it fitted as a glove
Now it seems that it was a queen bee exhaust
so now its the "Queen" Webra 1.5cc
(below the foto's is a video) 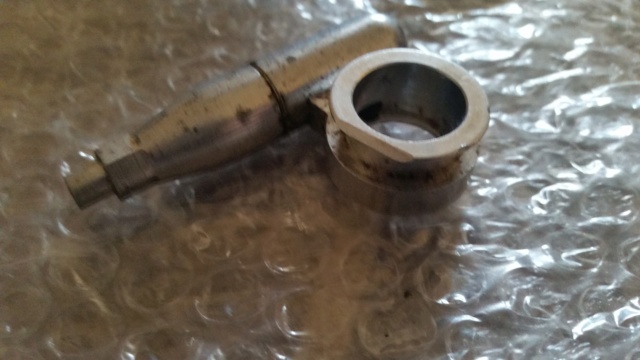 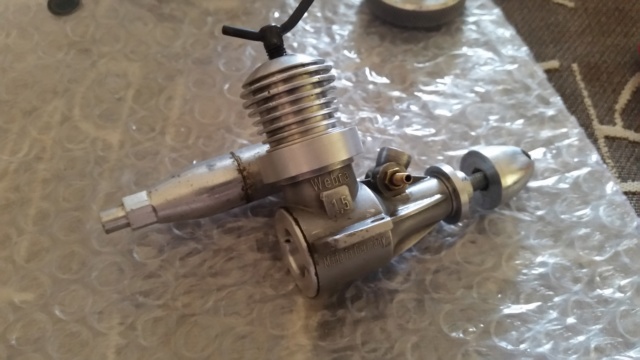 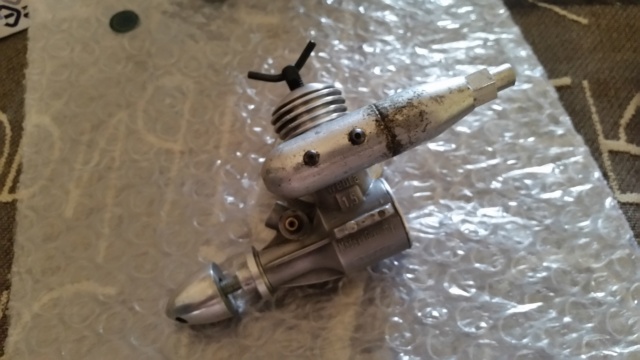 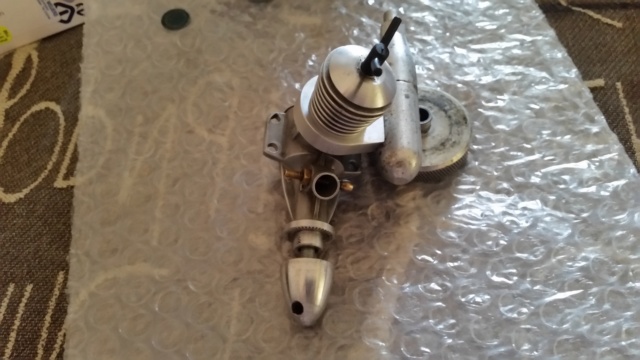 Now that is COOL! What size prop is it turning? I'm also curious about running/handling characteristic of that dieselized Cox .049 car engine.

Wow that is a lot of prop for that engine then again 1.5cc diesel so makes
good FF set up with the muffler keeping the goo control in check.

I've got a PAW .03 r/c and an .06 r/c but have never run them for lack of fuel and experience. I met a guy at a local R/C club who swore by diesels. All of his diesel models 9and he had a bunch from .03 to .40 sizes engines) had some sort of flexible plastic tubing clamped to muffler nipple and plumbed all the way back to the tail. He said his models slimed themselves a whole lot less than comparable glow set ups and the back pressure generated by the long tube wasn't an issue.

@1/2A Nut wrote:Wow that is a lot of prop for that engine then again 1.5cc diesel so makes
good FF set up with the muffler keeping the goo control in check.

They came with both mufflers and "throttle" (intake choke) options.
Props of around 9x4 are about right and should give you about 10000rpm, or around 7000rpm on a 9x5. I don't think that they will like anything larger than that. Sounds like it might be doing about 7-8000rpm in the movie?

I don't think I ever posted anything on Youtube of this engine model, but here is an image with the stock muffler and throttle: 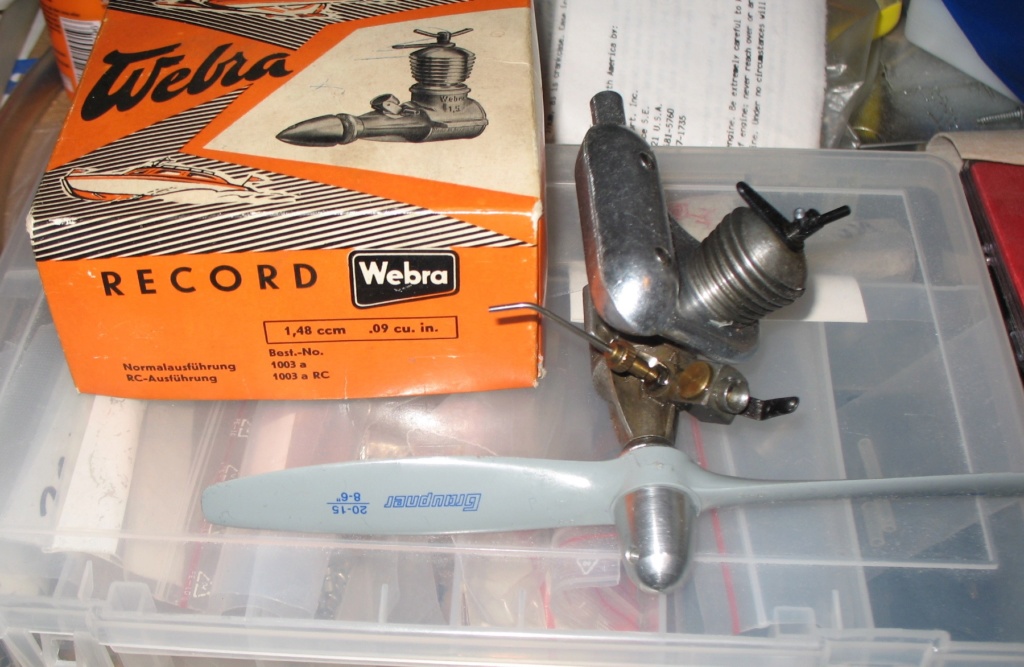 You beat me to the draw, Kris by seconds.

Sceptre Flight has an engine article on the 1955 Webra 1.48 cc Record diesel. I don't know if the diesel is this or a later Webra. Article photo shows a label of "1.5", can see the resemblance. 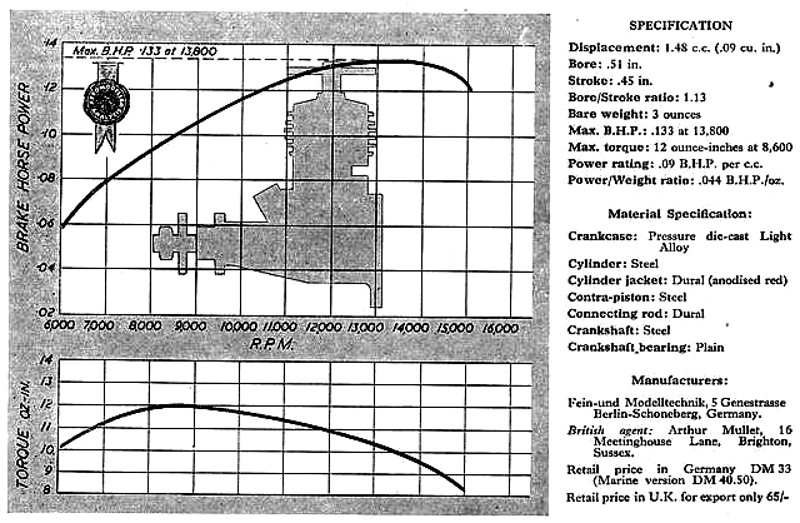 If the same engine, seems to be a mild .09, engine is a torque engine able to turn larger props with ease because of its hefty torque.

That 9x4 you mention Kris, would put it near its maximum torque when in flight, which is impressive.

Warring experienced increased vibration at the top end due to a heavy piston, so may be better to stay below that.
Not a speed demon, that engine would work really well in a vintage FF aircraft converted to RC.

The original reading was set at 19k max made a difference no doubt:

So then took the setting max to 10k and the rpm was 5,410 at the end with a noted peak
closer to the beginning at 7,128 rpm.
- Kris has a better ear for these diesels then me I don't have any to mess with for a comparison.

Provided wood props don't create a flip starting issue, an antique Flo-Torque 9-2 prop might be the cat's meow for this engine on an old-timer R/C conversion

If a 9x2 is unobtanium, may be a 7x6, 8x3 or 8x4 might work. One thing Warring mentioned is that the vibrations due to the heavy piston were so great at peak HP that it tended to move the compression adjustment and needle valve setting affecting the engine run. So one most likely would shoot for under than RPM for successful flight.

I've found the real test on a plane to what is best is to try the sizes out in flight. The Sceptre Flight engine test articles are good to get an idea of the type of props to look for and where optimal or best performance occurs. Then the airframe in the air is the final proof, as there are many more variables that determine what props work best.

On my 1966 Enya .09-III TV with similar curve, HP peaking out at around 14,000 RPM, I found a 7x6 wood prop to be the cat's meow. I wanted to try an 8x3 but that was not available at the time. Sometimes people want to prop engines as though they were Schneurles. The older engines were torque engines, obtaining the peak power at lower RPMs with larger props. I tried a 7x3, and the flight was very .049 like instead of .10 like.

But again what I say is academic, because i don't have the subject engine.

I find diesels intriguing and enjoy reading about them and the experiences people have with them, but never bothered because diesel fuel in US at my location is harder to get. But then I hear a lot of people are mixing their own fuel.

Gents=wrong Webra model.....the one shown running is the much later 'Record' 1.5 not the 1950s red head (or occasionally bluehead!) Webra Record 1.48 The plain head one dating from the 60s-and being a bit nicer handling....and if memory serves me had a different bore and stroke to the earlier model-which was well over square at 13mm bore x 11.4mm stroke. I have a feeling the later model was not as powerful-but generally nicer handling-and could be obtained with an R/C throttle as well. note...just for the sake of confusion....there is also a German 1.5cc Rekord ...this is the Taifun plain bearing offering from around the same time as the red head Webra....so you have to be a bit careful when discussing them....lest wires get crossed..;-)

The later model 1.5 did have a muffler provided for it-as did the very similar (in appearance) 2.5cc Webra Winner. There is of course a very late model Webra 1.5D-being a diesel conversion of the 1.5cc glow from the 1980s...but not too many of these final Webra 1.5 models are in circulation....