» Pee Wee Backplate Conversions - Anyone Experimenting Yet?
by Tee Bee Today at 11:03 am

» Testor/McCoy heros
by getback Today at 7:05 am

wmazz wrote:I use SPI or Free Porting currently on a 800cc racing engine. I have used (or tried it) it on many engines, but I used it the most on small to large Zenoah Hobby engines. I used to manufacture pipes for the small Zenoah engines (and clones) from  23 to 45cc.

Zenoah uses a version of SPI on a few of their "Strato Charged" reduced emissions engines for use in California. But Zenoah uses a 2 barrel carb that routes clean air instead of exhaust underneath the piston.

The 2 stroke engine builders called it "Free Porting" because of the gains in power they got after they accidentally installed a piston backwards with the intake skirt facing the exhaust port.

Bill, there is one topic that you are very familiar with as having been there and done it. That is dynamo'ing small engines. The model magazines all talk of their engine test conclusions. Perhaps it is there, but I've never seen an article on how they did this with even the miniscule engines such as the Tee Dee .010 and Pee Wee .020. Some of the setups I've seen use belts, pulleys, etc. driven off the engine's crankshaft with forced air for engine cooling.

However, these methods do impose a certain amount of dead load (i.e. inherent loads due to the belt tension, rolling resistance of the entire set up, and etc. The half A engines with horsepower outputs measured under 1/10th of a horsepower would I imagine have to use a different setup.

Some here have lathes and milling machines, could probably manufacture a set up if given the right hints.

So, I think that the folk here would enjoy hearing about some of the stuff you've worked on that involved model engines, real world stuff.

gkamysz wrote:I'm not sure what the "2" indicates. I have two cases without a "2" and they fit the crank with the thick web.

GallopingGhostler wrote:
Bill, there is one topic that you are very familiar with as having been there and done it. That is dynamo'ing small engines.
The model magazines all talk of their engine test conclusions. Perhaps it is there, but I've never seen an article on how
they did this with even the miniscule engines such as the Tee Dee .010 and Pee Wee .020. Some of the setups

It would help if I could upload pictures.

A common theme I discovered about gasoline engines for boats and rc planes was that the manufactures didn't want to
know how much HP/torque their engines were making. Often published HP specs were based on a computer program that
calculated HP by the size of the propeller it could turn.

Then other companies (including the Chinese), based their HP specs on engines of a similar size engines, that had already
published their specs off the propeller/hp computer program. There were also higher HP claims that were only good for
advertising.

There are also differences in the types of dynos, their accuracy, and repeatability. Dynos are basically either a brake or
inertia dyno. But there is also the propeller dyno (I believe it falls under the brake style dyno) The inertia dyno and propeller
dynamometers is the only easy solutions, they create the least heat during a test. But both have accuracy problems.

Another issue is what style of test procedure should the SAE dyno correction factor be applied too. It was designed for
a brake dyno, but it is used with inertia dynos. For a while the SAE correction factors for one brand of inertia dyno were
so inflated, their (dyno manufacture) competition wrote programs to compensate their dynos, so they would compare to
the other brand.

Relative Horse Power is at the heart of the SAE correction factor. All engines suffer from HP losses due to atmospheric
conditions, and when they do, often it will require a change in gearing or propeller size/impeller size. But model airplane
engines don't seem to loose hp at the same rate and increase the load on the propeller because the same lack of air density
that causes the lack in HP, also decreases the load on the propeller (bot a tuner could notice the changes). In watercraft
racing (Sea Doo, Jet Ski, etc.), with jet pumps, it is a different story. As air density decreases and relative HP decreases,
the water density remains the same. So you need to change the impeller to a smaller pitch, in order to remain competitive
in racing.

Something about pipes, a good pipe can add 48 to 50% hp than an engine tested without an exhaust system, but many
pipes are lucky to make 30% more HP.

I used to use the Gordon Jennings pipe design method that uses the 1/2 way point along a full length baffle cone to
determine the tuned length. This method results in a peak HP rpm that is lower than the pipe was designed for.

Exhaust gas temperatures (EGT) decrease with decreases in blow down times (BDT). The smaller the BDT, the more fuel is
mixed with the exhaust. An EGT thermocouple (TC) that is to close to the piston will measure the temperature cooler than a
TC mounted the proper distance away.

In order for a pipe to produce a decent top end power, the pipe must return the plugging wave @~18' before the exhaust
port closes. Because a plugging wave reduces the HP when it returns and the transfer ports are still open, it is recommended
that the minimum requirements for an engine to use a tuned pipe is no less than 18 degrees of blow down time (BDT). BDT
is the distance in degrees from exhaust port open to transfer port open during the power stroke. With less than 18' BDT, I
recommend a 1/2 pipe similar in design to the type of pipes that ultra lights use. These pipes only scavenge fuel and have
broad power bands capable of improving peak HP by 30% max.

Airplane engines with a minimal exhaust port duration and a 21' to 23' BDT is an excellent starting point. Some engines, like
rc boats and cars have special requirements that airplanes do not require.

Other characteristics of a good pipe is that it will lower the cylinder pressure below the current atmospheric pressure at bdc,
so that the transfer ports will continue to flow fuel-air mixture along the up stroke. This feature is an advantage for rotary
valved engines.

This effect is improved with a well designed head pipe and front cone design. The better the design, power will drop off
slower after the peak because the pipe still scavenges fuel.

All pipes continue to scavenge after the peak, but good designs will minimize acceleration losses and maintain a greater level
of HP as rpm increases beyond peak.

Returning to the SPI issue again-there is one further aspect that has not been mentioned in this thread-and it pertains to the muffler power loss aspect-which is so well documented by now that it should not be the subject of argument-as earlier commented on-with a muffler, burnt exhaust gas is obviously mixed with the fresh charge inducted in the crankcase, compared with the open exhaust situation-resulting in a weaker charge entering the upper cylinder-and hence reducing power...there is a second aspect to this effect in that the 'contaminated charge' is hotter than one boosted with ambient temperature air-so a less dense charge is transferred-as well as one which has less oxygen-so both elements contribute towards the loss of power.....two very good examples-based on solid data-but not involving Cox engines-are the British DC Wasp:  http://sceptreflight.net/Model%20Engine%20Tests/Davis-Charlton%20Quickstart%20Wasp.html
and the Super Tigre G20/23:  http://sceptreflight.net/Model%20Engine%20Tests/ST%20G.20-23.html

I draw your attention to the power curves open exhaust and silenced-the power loss is massive in each case.

Furthermore-SPI has been around a lot longer than just Cox engines-one or two of the early ignition designs used it as the SOLE means of inducting air into the engine-but it is a widespread design feature of many British and European diesels of the classic era-ie from ca 1950-1965-and some of them use extreme amounts of SPI-the British Elfin diesels being a case in point-where the ENTIRE depth of the exhaust port is fully open for a period round TDC.

This Howler .60 used spi as the only air intake 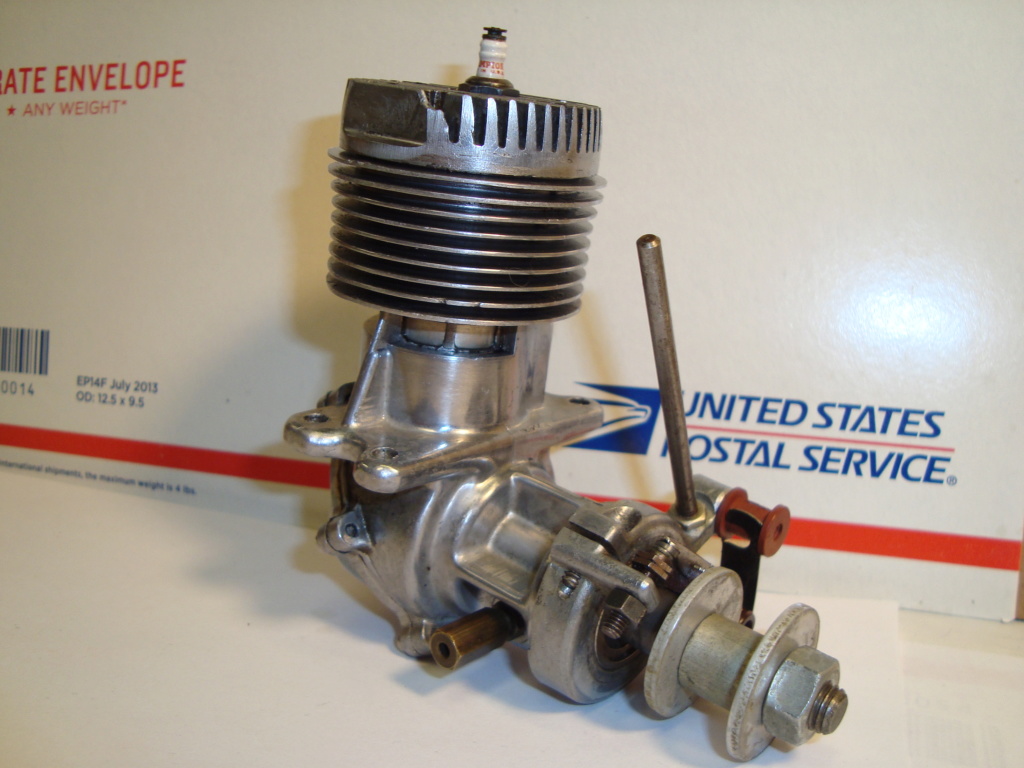 You can see the spi holes in this Viking twin 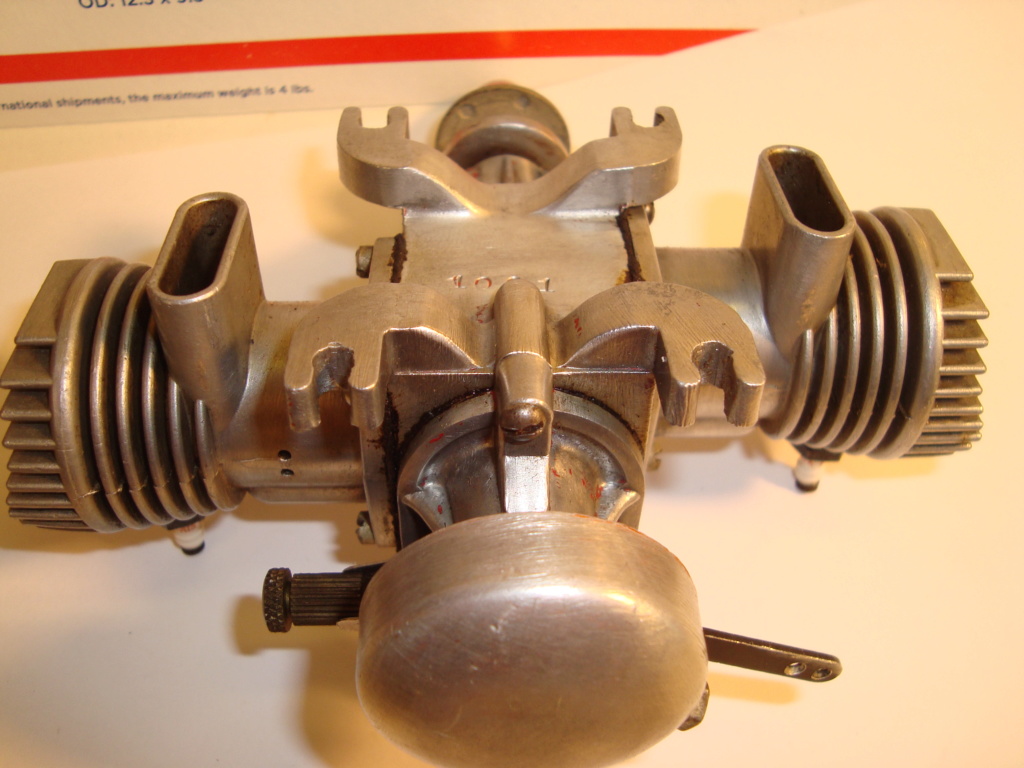