Log in
Search
Latest topics
» FINALLY!!!!! An Engine Day out in the Shop! Black Lynx Break-In and Pee Wee Backplate Run !!!
by Kim Yesterday at 11:56 pm

» Pee Wee Backplate Conversions - Anyone Experimenting Yet?
by Tee Bee Yesterday at 11:13 pm

» Catalogs on line
by getback Yesterday at 2:00 pm

I have a .09 teedee. It is in reasonable condition but I think the cylinder is slightly worn. I haven't tacked it but I guess it will barely run 14,500 with a 7x 4.5 prop. It runs fairly consistent but seems a bit slow? I was wondering if a new cylinder might fix the issue? However there are .09 spi cylinders and non-spi cylinder. Which is the better choice? Better performance or durability?

Before you go any further, disassemble your engine and soak it in fuel or 91% Isopropyl alcohol, reset the piston and rod, and find a 7 X 3.5 prop.
You may just have a gummed up engine.
SPI is the way to go for a Tee Dee .09 unless you throttle it or use a muffler.
Both SPI and non SPI .09 cylinders are pretty scarce and pricey now days.
I'd guess it's not worn out.
FWIW, Steve

Hi Steve
Thanks for the suggestion. The motor is 35 years old. I did open it all up and it looked pretty good and the slop in the Piston ball wasn't too much but it had a little. I'll open again and clean again to see. Great prop wash though really kicking some bhp out just seemed a bit slow. I trimmed down an 8x4 to 7x4 only way to get that over here in Korea whet I am. Using existing items. Fred had kindly sent some 8x4 for my Texacos. I had one left over. Fred had suggested trimming the ends. Thanks Fred!

My 09-s spin the APC7x4 prop at around 15.8k on the bench and unload around 17k on the air so yours is delivering power in the same ballpark. Whether a cylinder is worn is determined easy with a slow movement of the piston towards TDC and checking the blow-by at the exhaust ports in the meantime. At high rpm-s even if the cylinder is worn the time for the gases available to escape with blowby is very limited thus a sloppy piston fit does not automatically mean too much performance loss. With low compression it may need an electric starter to get her going though.

I changed the 7x4.5 prop for a 6x4 prop. I ran the .09. It ran well. Maybe little less smoke but not tremendous amount faster. Maybe still less than 15k on the bench. I think the 7x4.5 kicked out better prop wash than this?
Ice

Check your plug see if the element is in good shape. Also the 14500 data was derived from you stating 14.5k
The Scimitar series master airscrew 7x4 will unload better than any other nylon 7x4 / 6.5x4.5 is a good mix
of speed and thrust.

1/2 Nut
Interesting the smaller props actually have better performance then the larger prop. According to your stats. Faster run and better thrust.

Most of the .09 and .10 motors recommend a 7-4"  If you want to go faster add more pitch and less diameter as mentioned 6.5 - 4.5 would be good depending on your plane of course.  A 3D plane may want an 8-3.... From my notes here, my TD .09 got 16,400 with a skinny blade Master Airscrew 7-4 prop.  There are some wider blade ones too, they might turn up a bit less.  For comparison, an ASP .12 turned 15,000 on a wide blade MA 7-4, and an AP .09 matched the TD in my examples, all with no muffler.  I don't think there is really anything wrong with your motor anyway.  You could check a Sceptre flight review and maybe find an old article where the power band is, and prop it to slightly less than that.  It is around 20,000 (edit) to be happy.  Anything smaller is just hard on the poor old motor.

Also all props are not alike as mentioned 7x4 loading can vary greatly.


Save this link for all engine listings in it's data base, I have a  link icon on my desktop:

Sceptreflight is also accessible from here i.e. CEF, go to the very bottom on Instruction Sheets...

So I tried a 6x4 on the .09 and didn't notice any rpm improvement.I put the 7x4.5 back on and it ran pretty much identical rpm as the 6x4. I think it just tipped into 16 k though. It could be that with the running about 5-6 tanks of fuel the cylinder is getting nicely cleaned up so noticed about 1k+ additional rpm.

After all 35 years have passed since it ran around the block. I think that 16 k isn't too bad. However Cox in the manual that came with it claims 17,100 with the 7x4. Maybe a couple more tanks will see it climb a bit more.

I was quite interested in the stats though with props pitches and thrust 1/2 a.

Something is wrong check your glow plug. The 6x4 should have made more rpm.
Is it a thin walled cylinder? Is the coil shinny, is your fuel fresh?

The glow plug is after market with a K&B plug insert. The fuel is 25% 10% castor. I use it in all my other motors and it runs sweet?

Never ever never use just 10% castor with cox engines the engine is running hot is why it wont make peak rpm.
Mecoa aftermarket plug produces  less compression is the other issue. Minimum 15% castor oil always.
Engine is thermally restricted and low on compression use one head shim with that adapter will help.
Stop running the engine with a peak NV it is wearing out faster.
I always and forever will use 20% castor and always get peak performance with very low wear.

At 16k it reaches a temp it can not over come regardless of prop as you have found it sags into a
thermally controlled running state.The NV has to stay richer just to keep the engine running steady.
1/2A fuel  is the only way to go. 25% Nitro / 20% Castor has never let me down on hot summer days.

Some of my top speed results with Cox engines all with 25 to 35% nitro / 20% castor:
Never broke a conrod or axle and no piston damage all strong running engines to date.
RC planes 2 and 3 channel best peak passes by the video camera: 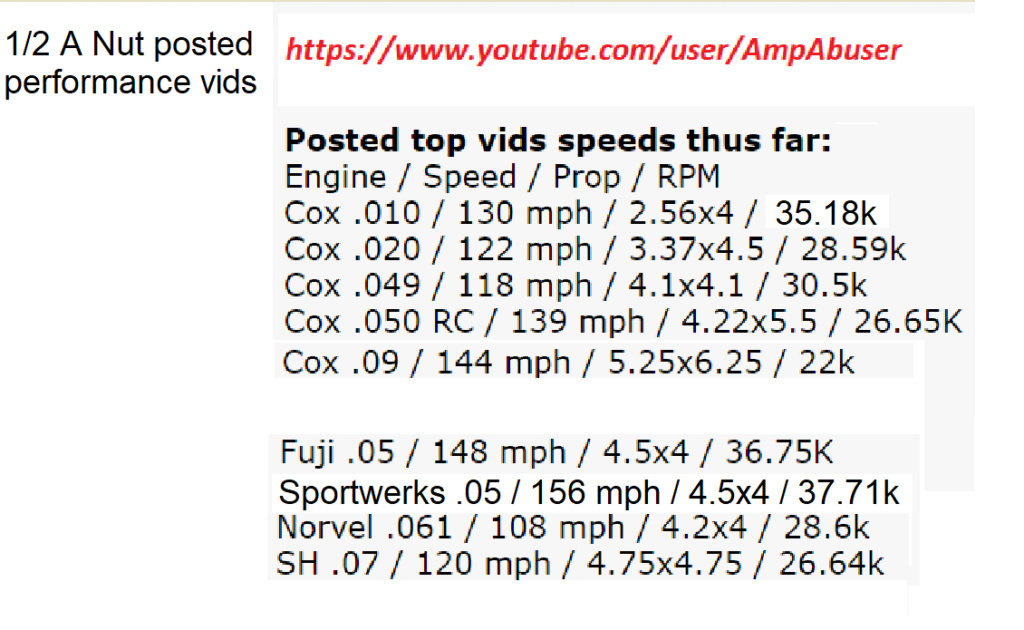 Hi 1/2a
Thanks for that. The fuel also has synthetic as well or course. Sadly I have no other parts like shims or anything for the .09. I have a few parts for .049 because of some that helped. But no shims or other parts for the .09. Yes I feel the compression it's a touch low on the Mecoa head.

Thank you yes figured you had a blended oil %, what is the total content?
You will find 1 shim is all you need with the Mecoa plug adapter.
The Cox engines tend to nuke the synthetic oil leaving 10% castor
sticking around for the the next heat cycle. Peak NV settings can be
obtained with less fear of wear but more so thermally the engine
can handle the leaner setting for more rpm.

It may be varnished up a bit too. Scotchbrite and acetone or laquer thinner can take care of that.