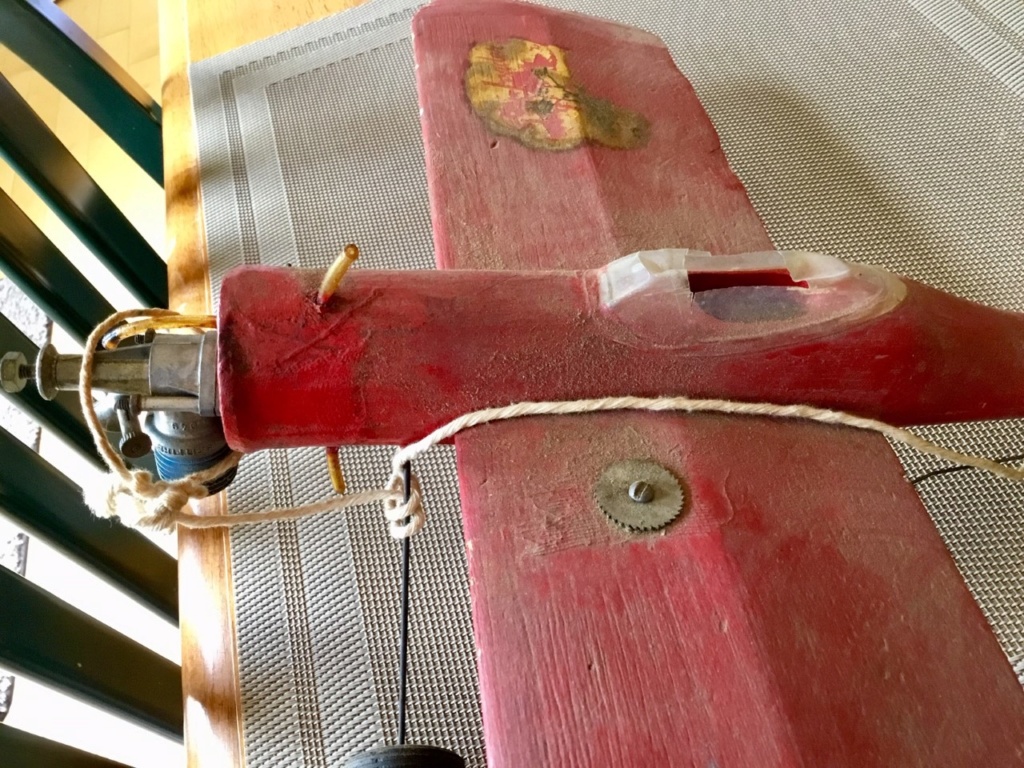 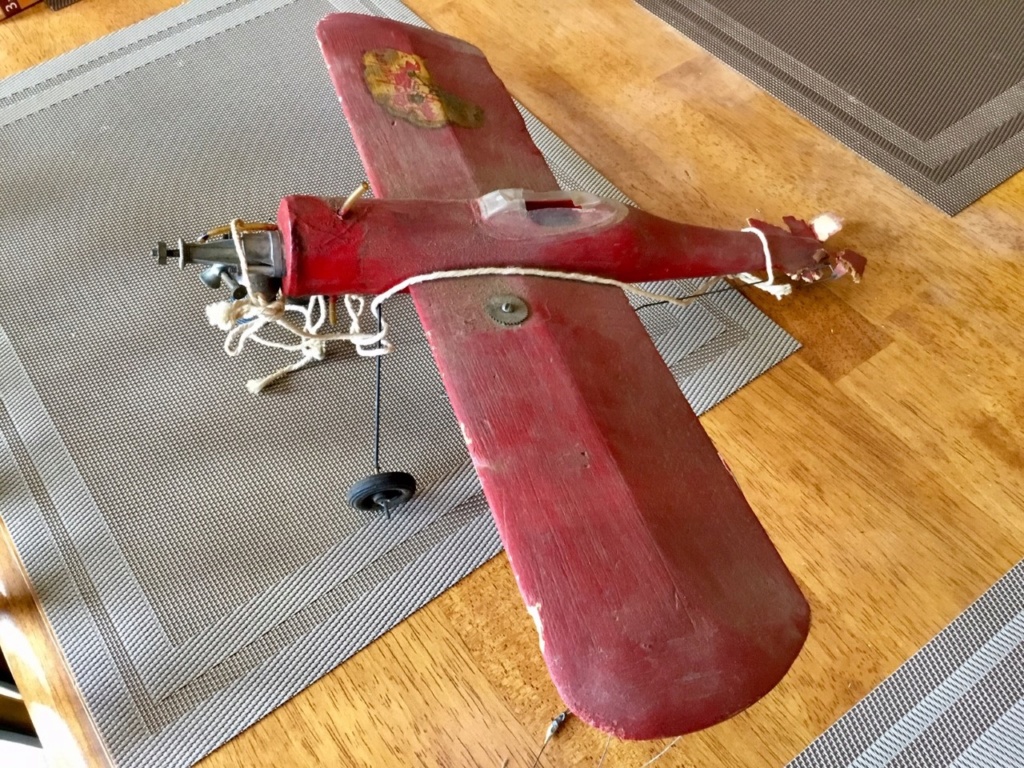 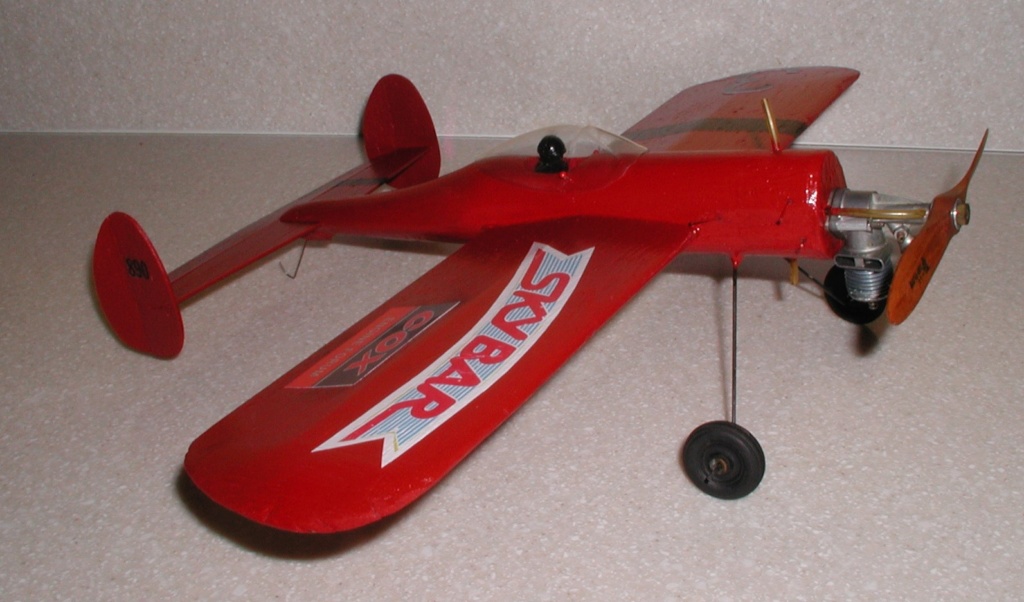 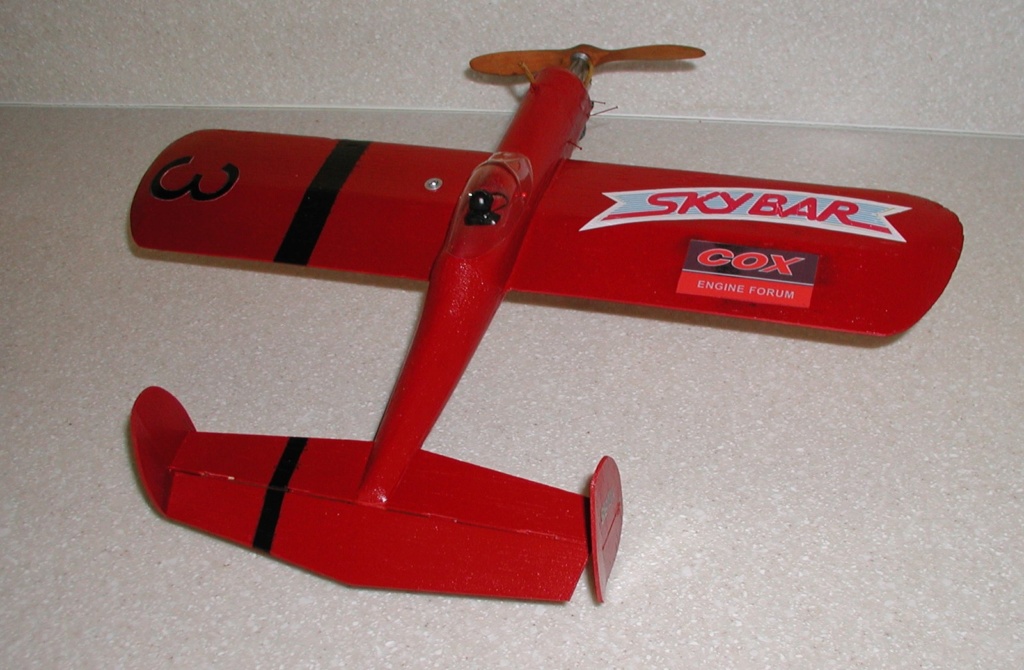 I tried to save the Sky Leader decal but it didn't happen.  So I sanded it off and painted the whole plane with that high heat engine paint.  Photographs show sparkle but really isn't.  As I mentioned the PO didn't sand the model and the flash really catches the effect.  It's more of a semi-flat look.

I debated about changing the rather large bell-crank for a smaller "perfect" brand but the PO installed lead out guides were spaced to far apart and in my opinion way to far back off the wings leading edge for that to be an option.  So I just repaired the original supplied with the kit bell crank and used that. 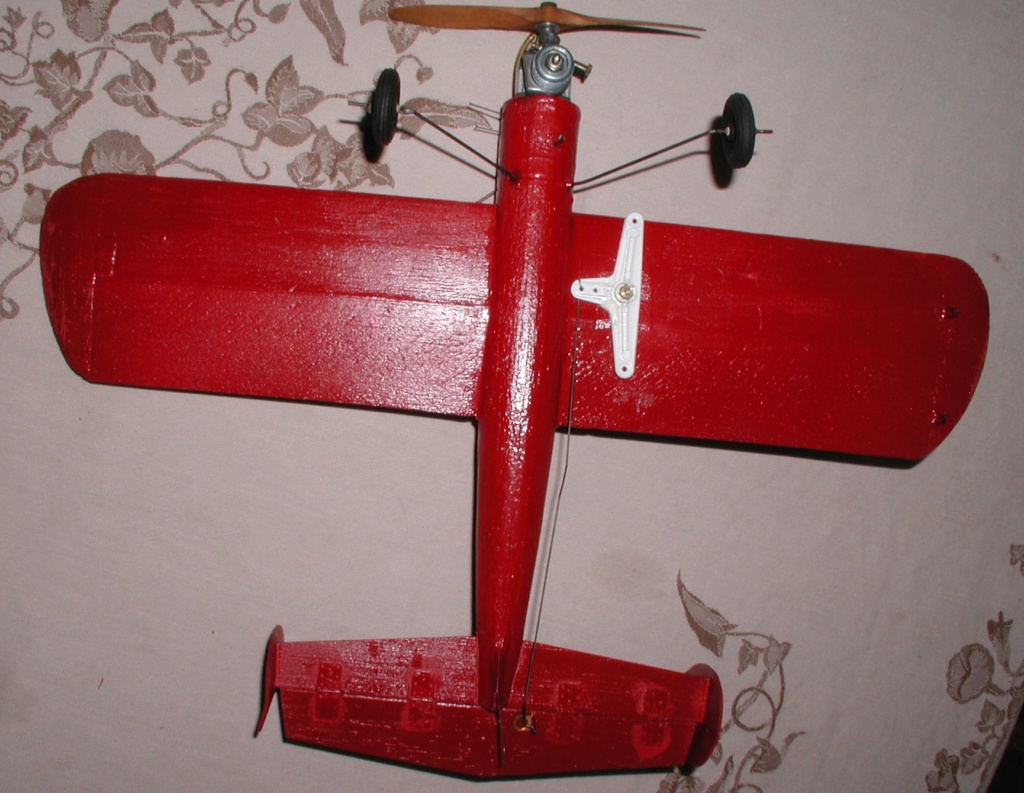 I tried to duplicate the paint scheme that appeared on the box. 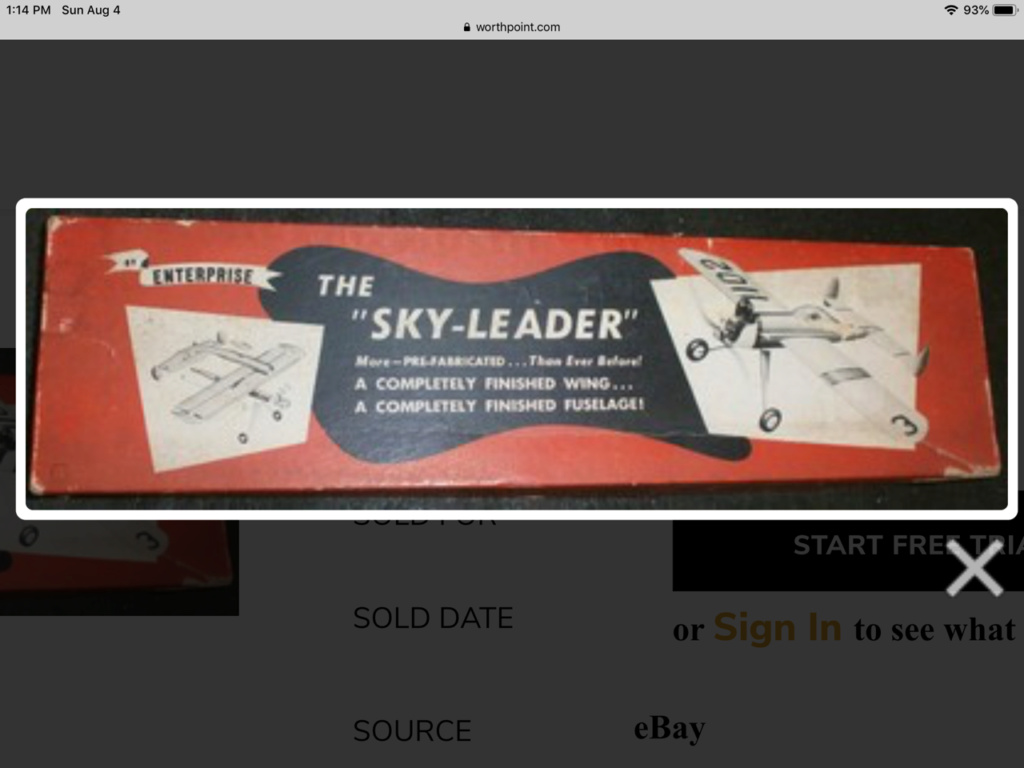 Bought another Spitfire engine, same type only with an attached tank.  Might use it instead if it will run. 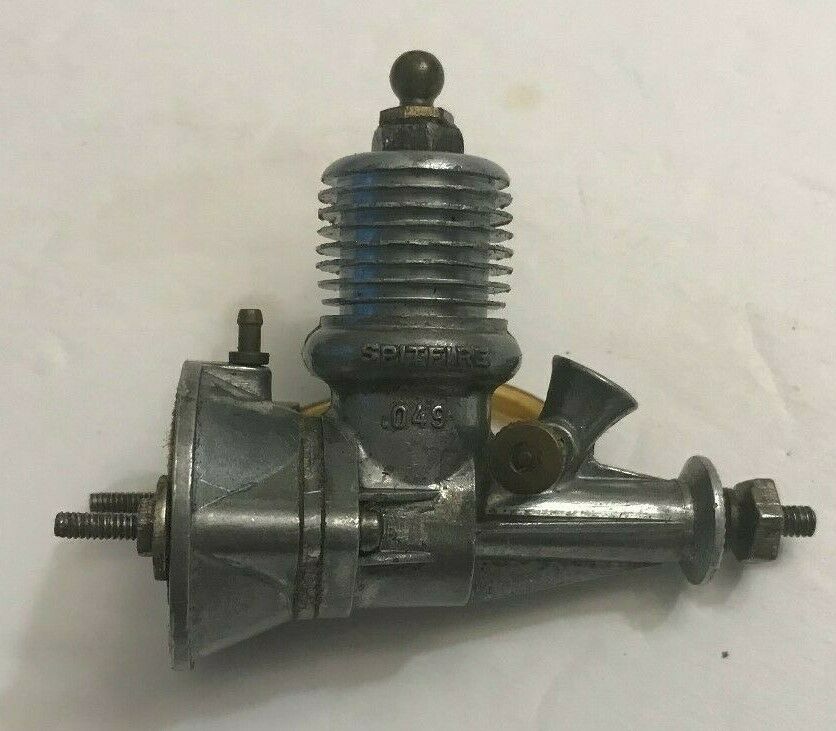 In reality, the leadout guides would be correct if you orientate both wires through the single forward guide. You don't need two. When I look at the pushrod, it appears to me that it's going to bow badly. If you hold the elevator and move the bellcrank, it looks like it would take little effort to collapse the wire where the bend is . Maneuverability isn't generally a option with hollow logs. The larger bellcrank will just slow your controls down a lot more.

Bob,
Skybar lives on! Really enjoy your results of restoration. You’re a master at revival. The canopy looks like a original, and the pictures make the plane look new!

Awesome job. It really looks good. I like the little added touches of both the CEF decal, and the little offset in both rudders. That is honestly something I would not have thought about.

What about Sky King and Penny??? Does anyone remember??? All their hard work should not be in vain!!!! Oh uncle Sky!!!

Must say the airplane looks great!! Keep up the good work!!! Mark

Why in heck is the engine inverted? Flip that dude right- side- up, and spare it from being damaged by any inadvertent nose-over maneuvers on the runway. Plus, it just looks weird upside- down,and the box shows it upright.

Thanks all for your comments.

I doubt that it will ever see air time Ken, unless the new tanked engine runs. If it does I will keep your recommendations in mind.

I think Kim is a big Sky King fan. Lot's of stuff posted here about the series in the past.

The fuel line is on that side Gus, or I would have turned it right side up. I could drift out the NVA but risk damage to the engine by doing so.

I kept track of that circular saw blade until final assembly, then couldn't find it. Lost the whole assembly, saw, bushing, washers, nut. Turned the workshop upside down to no joy. Had to use a common washer instead. Things just vanish...……………..

The plane is 90% how the previous owner built it except for the new tail section. I even saved his lead-outs to use if I ever put them on.

That's a whole lot better you did another good job on restoration, That is a pretty big bellcrank on there hate you lost the saw blade that really made it

Its in your tool bin

On the bright side. If you wanted to replace the saw blade, I believe that one from a Dremel tool would be a alternative replacement.

That other Royal Spitfire has an Arden plug in it (not from factory) I would save it for installation in an early production run first version Cub .049 with crankcase serial numbers--unless you have an Arden .099 or .19 to use it in.

ticomareado wrote:That other Royal Spitfire has an Arden plug in it (not from factory) I would save it for installation in an early production run first version Cub .049 with crankcase serial numbers--unless you have an Arden .099 or .19 to use it in.

I noticed that. I have Arden and other older plugs that I need to check out and mount on era engines. Just haven't gotten around to it. Like that circular saw Chancey, I have dremels but I'm holding out for the original. Went through boxes today looking for it. 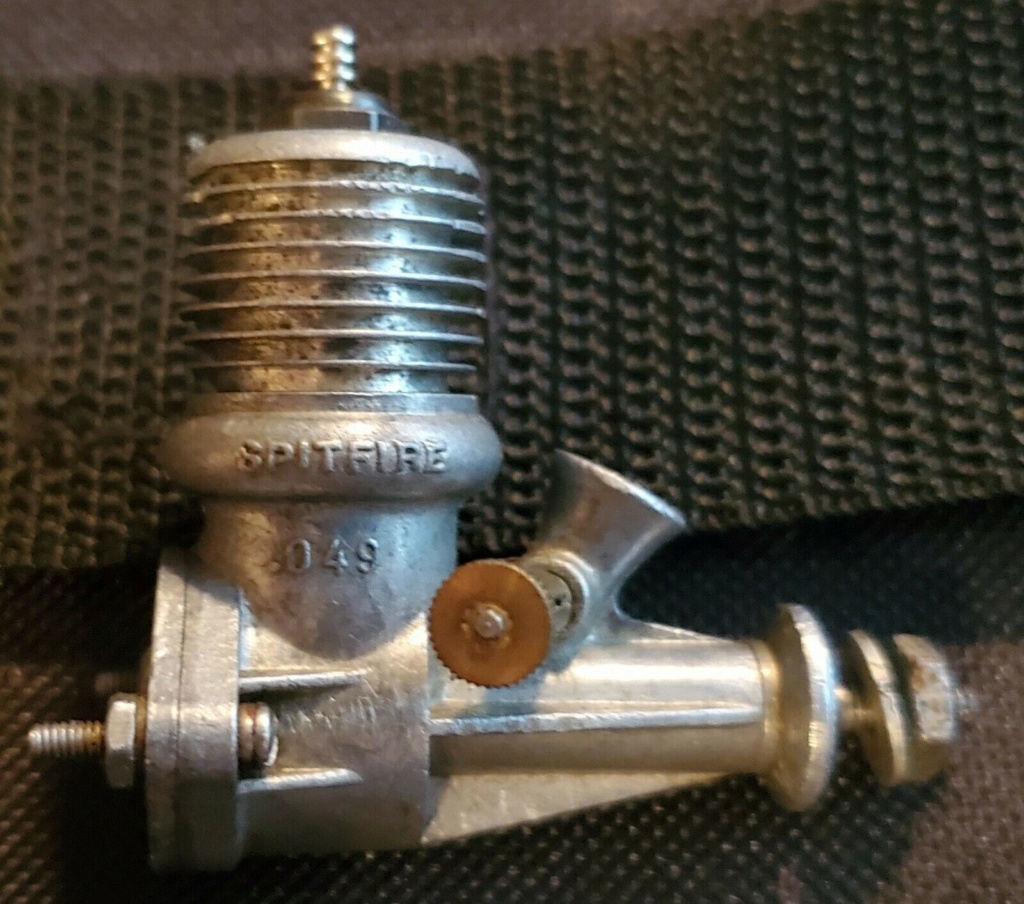 you can afford to switch the NVA Then

you can afford to switch the NVA Then

Well, if the tanked version (above) works out I will be using that, positioned upright of course.

My arbitrary at best balance point indicates a slightly tail heavy tilt anyway, the tanked engine should solve that. 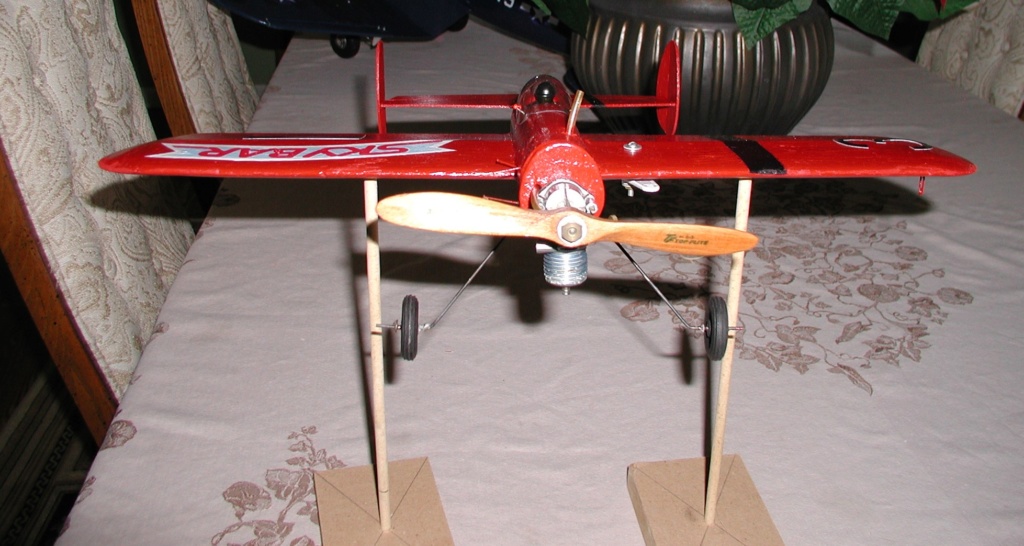 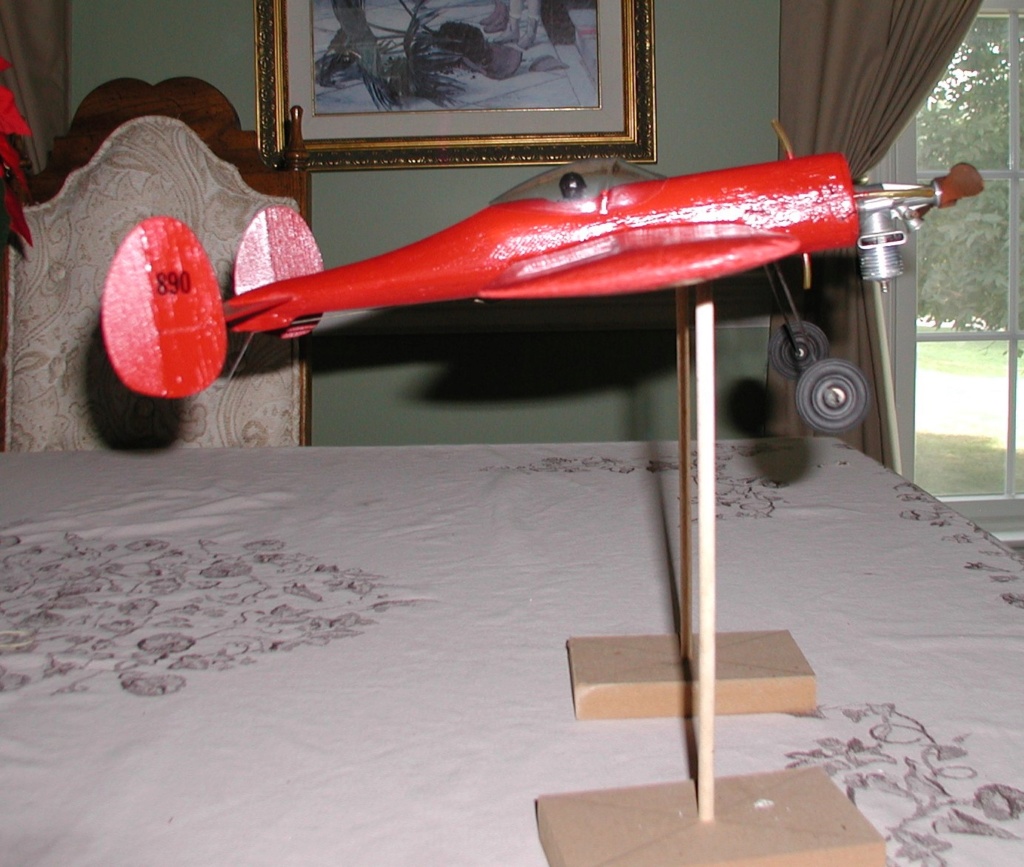 Sorry Bob, I do not want to hijack your thread, but seeing your plane has me scratching my head now. This may just be a silly question, but am hoping someone may know. This is in relation to the engine on your plane inverted. Does having teh engine inverted happen to have any effect on the balance of the model? I know in theory it shouldn't as nothing has changed, but am also thinking the mass hanging down just MAY have some effect.

Theoretically, you want the centerline of thrust on the centerline of wing.  The CG isn't impacted as the mass out front is no different upright vs inverted. Almost every full size stunter utilizes it's engine inverted due to the fact that aligns the spraybar centerline with the tank centerline as both are sitting on the underside of the beams. There's generally not enough room on top of the beams to mount a tank so mounting the tank under the beams and mounting the engine inverted solves this problem. This just might be the same scenario with Bob's plane. Many planes of the 50's especially combat plane mounted the engine upright and the tank on top of the beams. This ceased in and around 1962 and combat planes went sidewinder with their cylinder mounted outboard.

I see no access to Bob's tank and I have no idea where the engine centerline is related to the tank centerline so I can only speculate. When you have a inverted engine, it requires a slightly different starting sequence as it can flood very easily. The cylinder can lock up due to flooding and it can easily damage plugs so one needs to adjust their starting procedure to accommodate this. One nice feature is that placing a finger over the venturi and pulling a choke through the engine is that if too much prime is pulled through the line it can run out of the venturi when your finger is removed. However, if the window of the crank is in the venturi opening, the case can easily fill up entirely.


When I start some inverted engine stunters, I start the engine with the plane upside down and flip it over. My son and I over the years have developed a very safe method to do this.

Looking at Bob's head on picture he provided, it looks to me that the spraybar is lower than the tank centerline. Again, this may not be the case because I don't have the plane in front of me. Therefore, if you don't cap off the vents immediately after filling, the fuel is going to fill up the engine with fuel. These types of planes generally fair better when the tank is slightly lower than the engine spraybar because they usually don't maneuver anyhow and mostly fly level. If the plane is to be flown inverted, the opposite of what happens upright occurs and this could be problematic.

If the tank is higher than the engine upright the engine run will be rich and if the plane is inverted it's going to run lean and it can go overlean and quit.  You don't have to fly inverted to recognize the shortcomings of a incorrect tank height. It will be recognized even in a loop.

While all of this sounds confusing to some, many tanks especially commercially made tanks are crap. By that, I mean that just placing a tank in a model just by eyeballing it doesn't always work. One needs to open the back of the tank and orientate the pickup tube on the true centerline of the tank. Perfect tanks are notorious for just placing the pipe anywhere and Perfect never has soldered the pickup tube in the tank. If you see a Perfect tank with it's pickup exiting the top of the tank ( They did this with many smaller wedge tanks) this usually equates to the pipe terminating at a angle on the bottom of the tank where it should've terminated in the middle.

Maybe the best thing to do is saw the mounting bolts off flush, make a breather hole in firewall and wood screw mount a Space Bug Jr. on it. (or Cub .049A) Balance solved, tank issues moot, better aesthetics and good period engine to plane match. Then go to work on the Spitfire's running issues.

Thanks Ken for the lesson, I think you answered Chancey's question and you sure cleared up a lot of issues I have had over the years.

The "new" Spitfire engine came in today, a day late. But first I tried the original engine in the upright condition, sure looks better. I guess the only reason the original builder placed it inverted was because of the fuel pick-up and he didn't do his homework when installing the fuel tank. 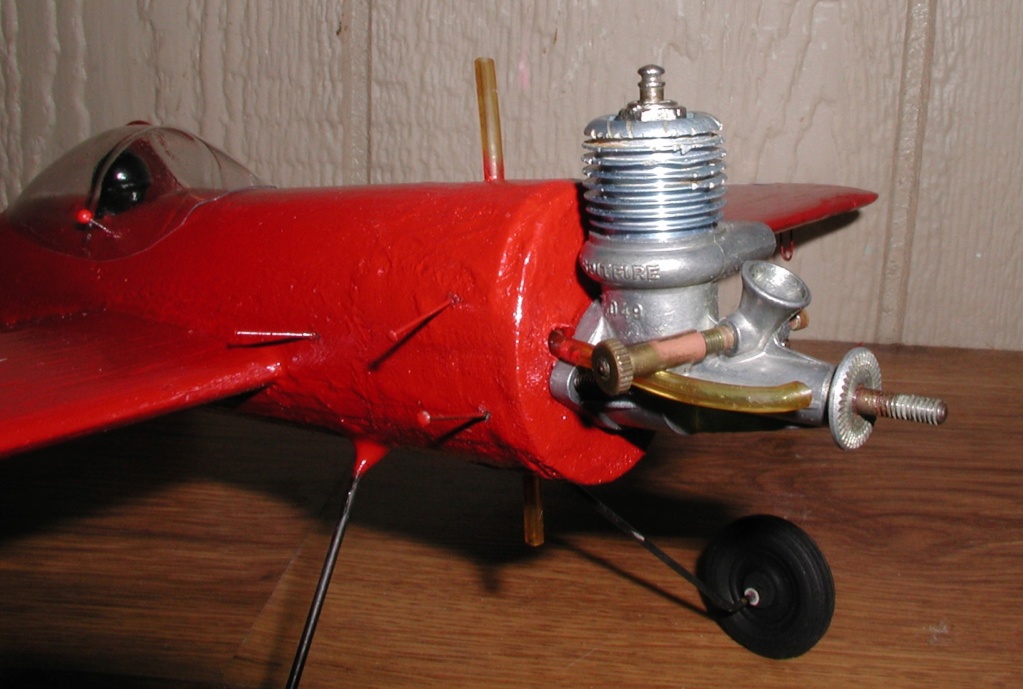 The new engines tank is clean and features a home-made gasket. The existing machine screws are long enough to accommodate the tanked engine but the side bars prohibit using a nut to secure it. So, I'm back to square one. I will have to razor saw off the firewall remove the screws and install proper blind nuts. Then figure out if I want to retain the original gas tank or remove it and go to another engine as Victor suggests or use the tanked Spitfire.

A lot depends which engine runs.

I found those old glow plugs and will make an effort to clean them up. Which begs the question - what to use? Sometimes I boil them with the engines, sometimes I use Simple Green. Best method? These plugs will probably never be used, but placed in engines correct for the era. 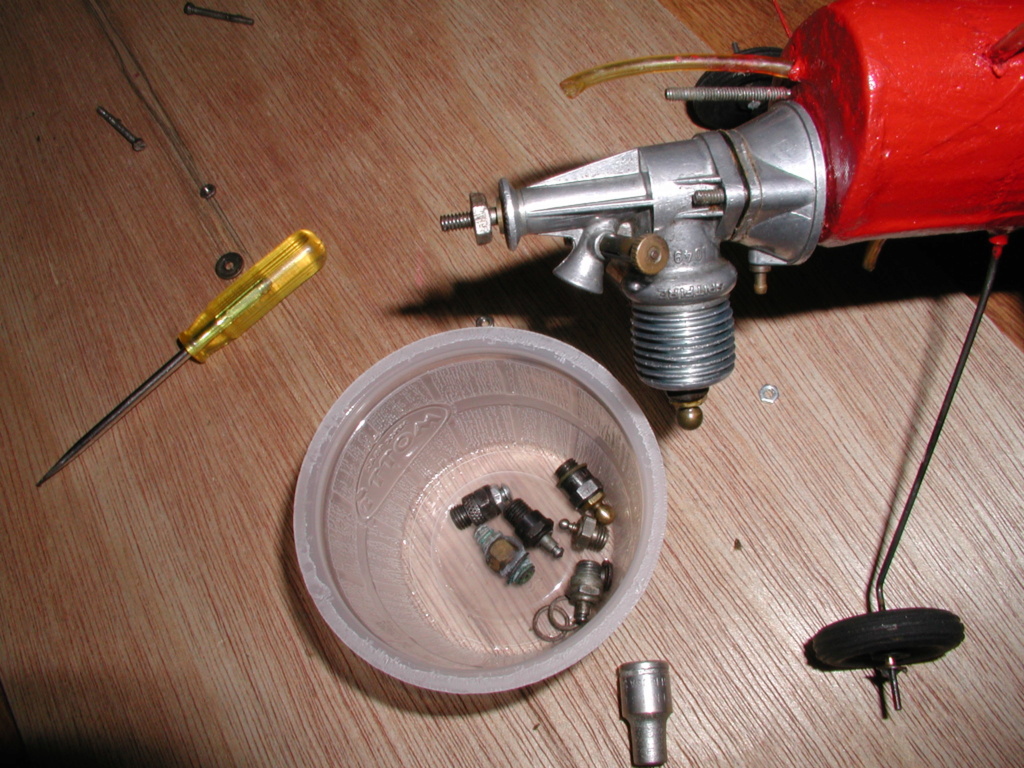 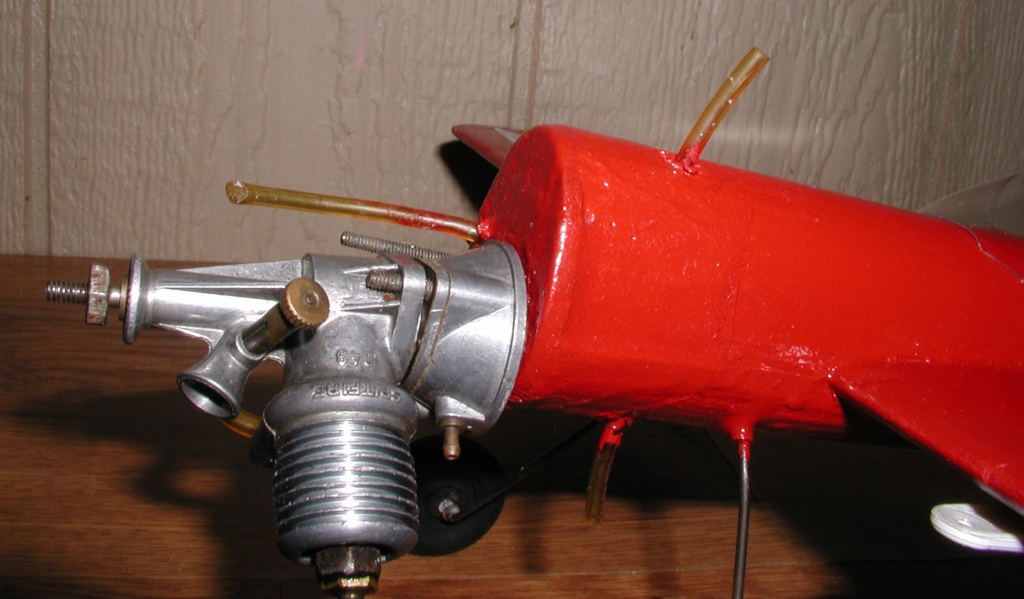 Make a new tank back gasket for the Spitfire. No need to cut a hole in the middle of it.

You can also splice a fuel line extension with a brass connector or fuel line filter on the fuselage nose tank to reach to the opposite side of spray bar. 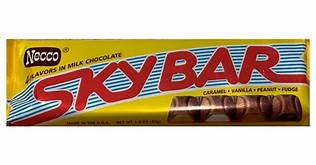 Maybe I should have labeled this one "Skybar -2". 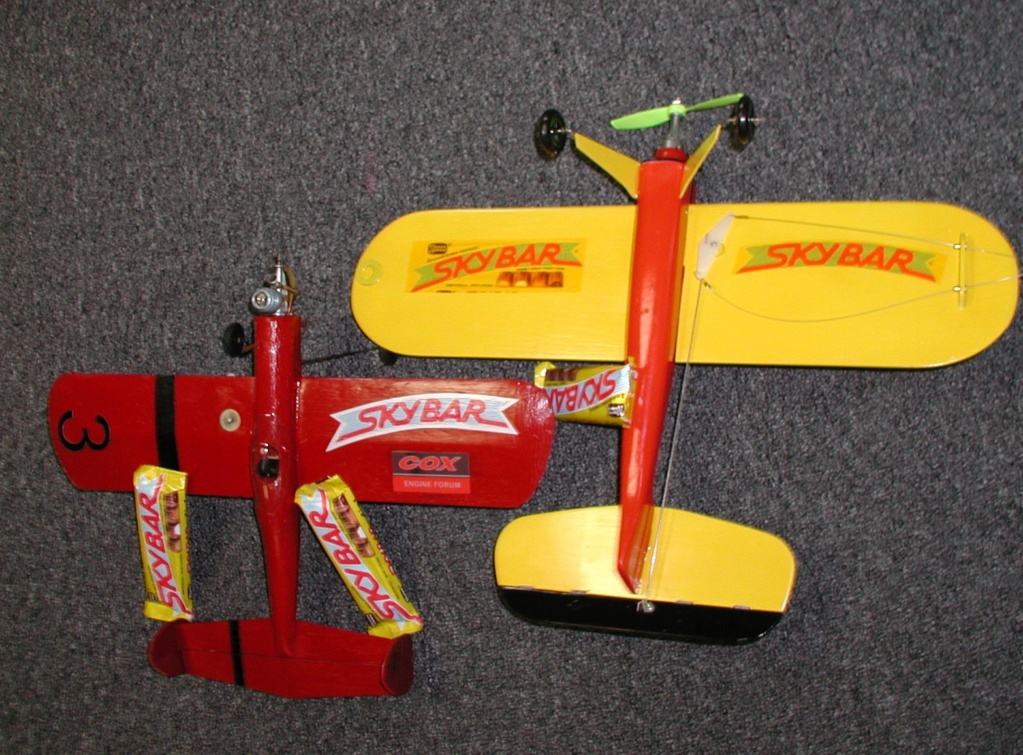 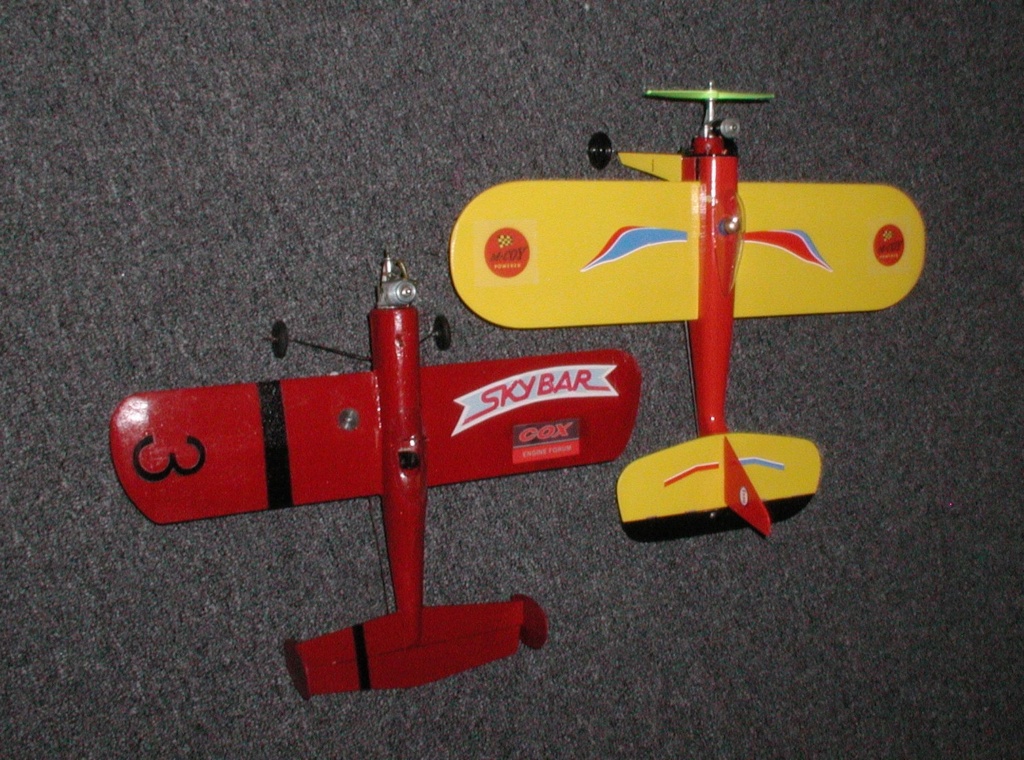 Got to remove those misleading McCoy decals and replace with the nifty Cox Engine Forum ovals.