» Quick Cox Glowhead Question
by NEW222 Yesterday at 2:05 am

I bought this kit from a CEF guy a couple years ago after hunting it down for a year...the original was sent to Dave Cowell of DPC Models for digitization. He then sent me the first run kit. Since I spent this year smashing my Mossie and the larger Scientific P-40, I now need to finish this one so I can go fly again. It has been on the bench for too long, along with another really cute project (some other time/thread). Besides, I owe Dave a build log so he knows how the kit progresses, or if it needs.fixing (no changes required, Dave).

Key note is the use of Tidi-brand crepe exam table paper (not smooth). I coined the name "Docspan" for it when I read about it on StuntHanger. The roll came from an online purchase from "4(something) Medical," and cost $11 for the 125 foot roll. Enough paper to last me through a bunch of kits and scratchbuilds! This stuff is just a smidge heavier than Guillow's tissue.

ISTR the original owner of my kit is named Steve. I also "met" Chancey while searching for this kit. It is unusual in that it has a plastic turtle-deck over the box-framed fuselage. So both of you may get a kick out of the build.

Anyway, I intended to build this one around a Babe Bee, but the Scientific profiles my boys built wound up really nose-heavy. That isn't a bad thing until the engine quits, at which point their planes must be landed really hot because they won't flare at all. So I may change my mind and pop a TeeDee or a PeeWee with the fancy, new backplate I bought. 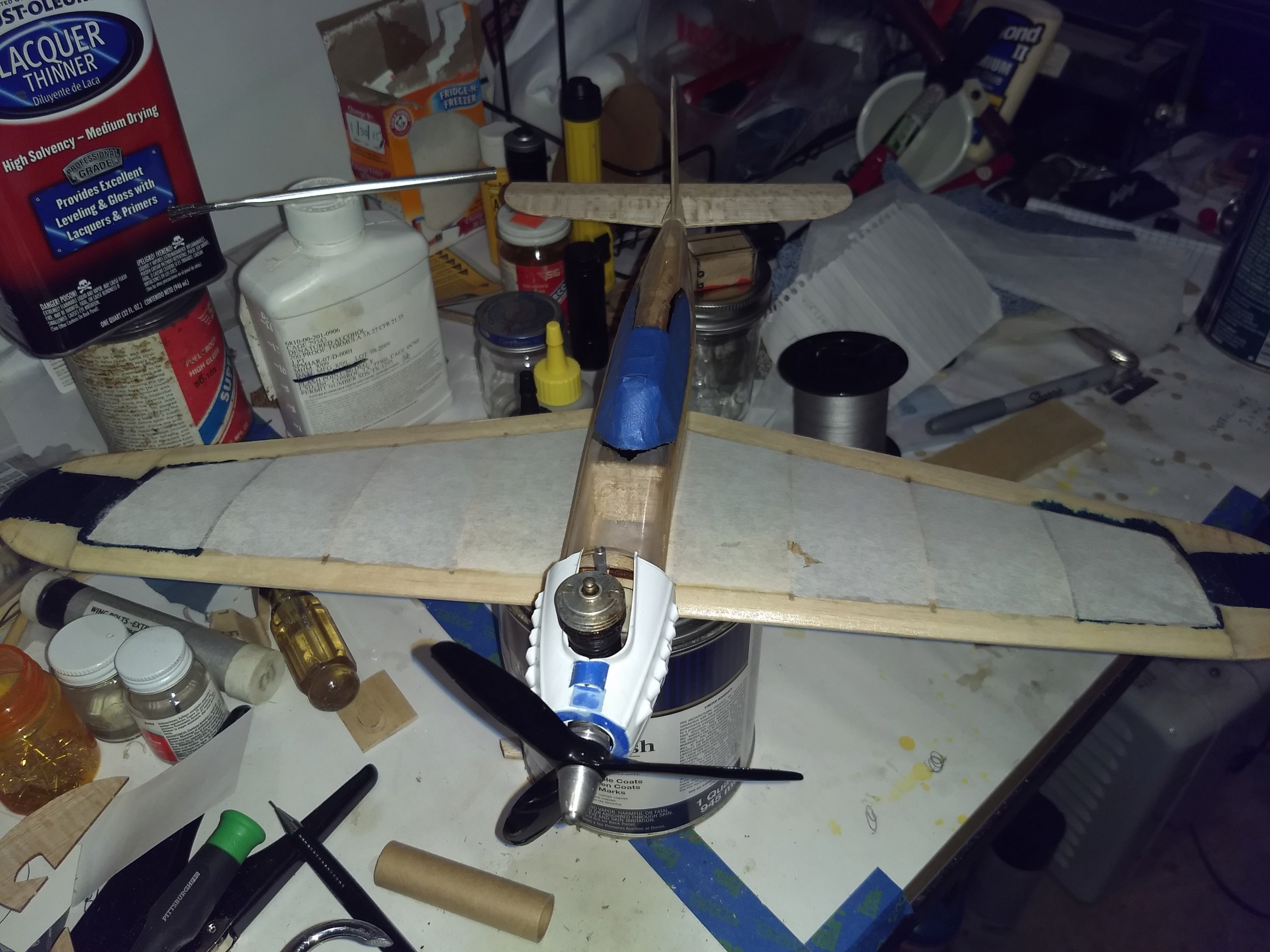 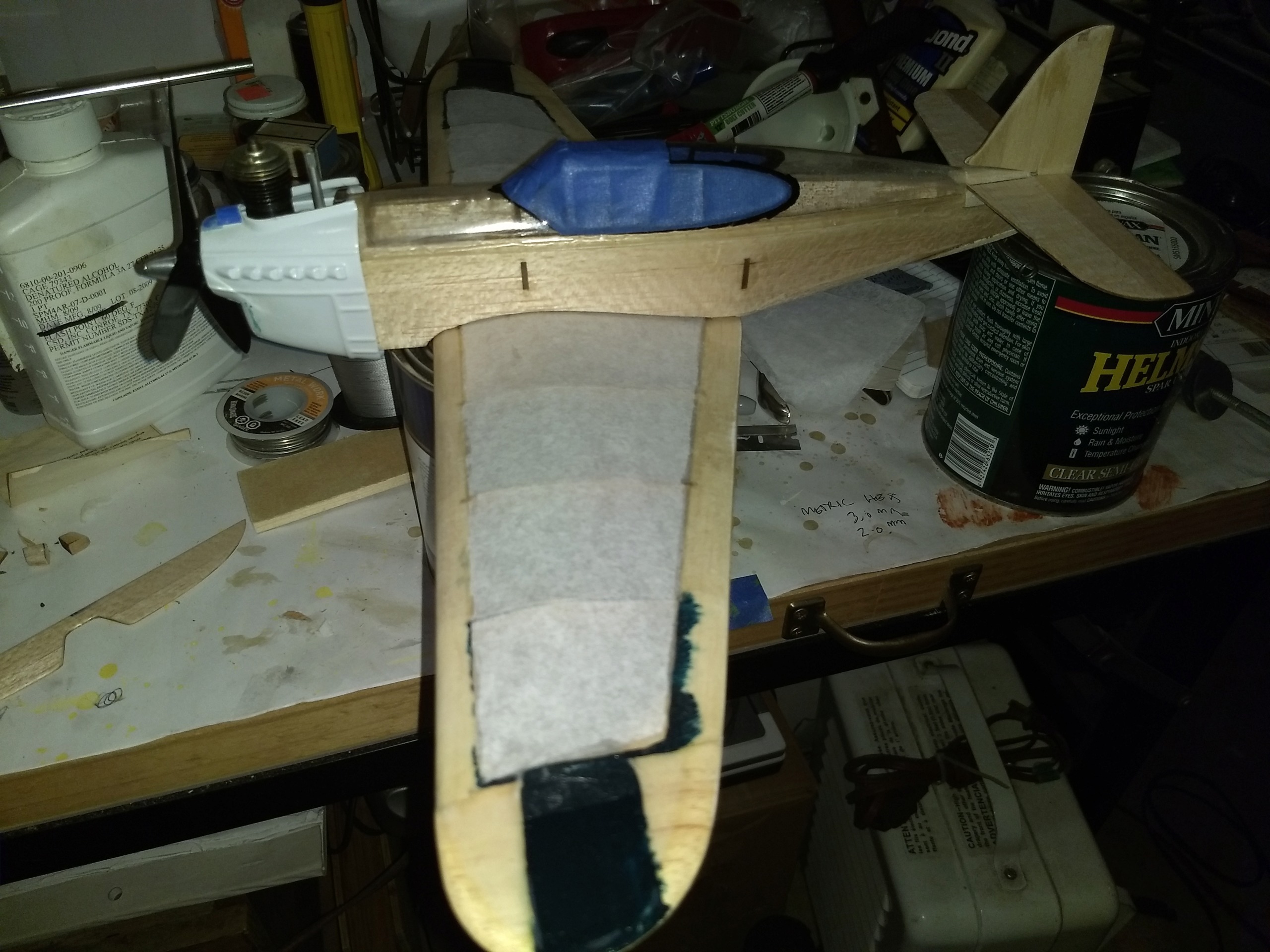 I remember this plane , it is cute for sur . Whats the w/s Good to see it moveing along on the table now , carry on .

Looks like it is moving along there. What is the dark color on the wingtips looking like it is hiding under the paper?

@NEW222 wrote:Looks like it is moving along there. What is the dark color on the wingtips looking like it is hiding under the paper?

Hi Chancey,
This is the second time I've doped tissue on the wings. I did the wingtips first, and then applied gift tissue to the main wing panels. I used some metallic green SuperCoat I had floating around to tighten the tips. The main panels never really pulled tight, even after a splash of SuperCoat. One side had a  rolling wrinkle across it.
I really wrecked my mini Mosquito (also mid-build for too long...it's on RCG/CL) by applying too much dope too soon. I was not going to do that again!

This time I cut the panel tissue off and started over. Since the new Docspan works as well as it does, I'm inclined to slow down the shrink-process so I don't Pringle another wing! More significantly thinned dope, less hairdryer and straight dope this time.

I hope to have more done over the next few weeks, but life has a way of stripping me of free time right now.

Things left to do:
Make a gas tank for behind the firewall, preferably narrow enough to fit between the engine mounting screws...with nuts soldered on for the screws.
Make a landing gear plate that screws to the bottom of the wing, with the bellcrank screw being one of the retaining screws for the plate (this worked well on my boys' Scientific planes).
Attach the tail...as in, glue it on! I have been tracking a thread over on SH regarding sewn hinges, and admit I'm a Frankenstein-hinge kind of guy. I hope to take lessons learned to make a more invisible sewn hinge.

One thing I'm tossing around:
Keep the wing removable, ala PT-19, so I can take the plane on short trips a lot more easily. The fuselage already has some strategically placed cross beams as I considered this from the beginning. Locating dowels will be in the beams to fix the wing centered, and cross dowels will go in place for an x of rubberbands to hold the wing on.

Oh, and of course, paint it. I think I may do some panel lines, and a cockpit with dash and pilot. The turtle-deck has been taped from the outside, with the frame for the glass painted in the inside. I expect that to turn out really well. It sure looks good going together. I may even do guns and radio mast. Why not? It isn't like this one is goingq to do anything beyond roundie-roundie. It still has to be lighter than a log!

@getback wrote:I remember this plane , it is cute for sur . Whats the w/s Good to see it moveing along on the table now , carry on .

GB,
WS is about 18". It follows the same build style as the 18" Scientific profile planes. I think Scientific recycled their ribs from one model to the next, and changed wingtips to suit the example plane. 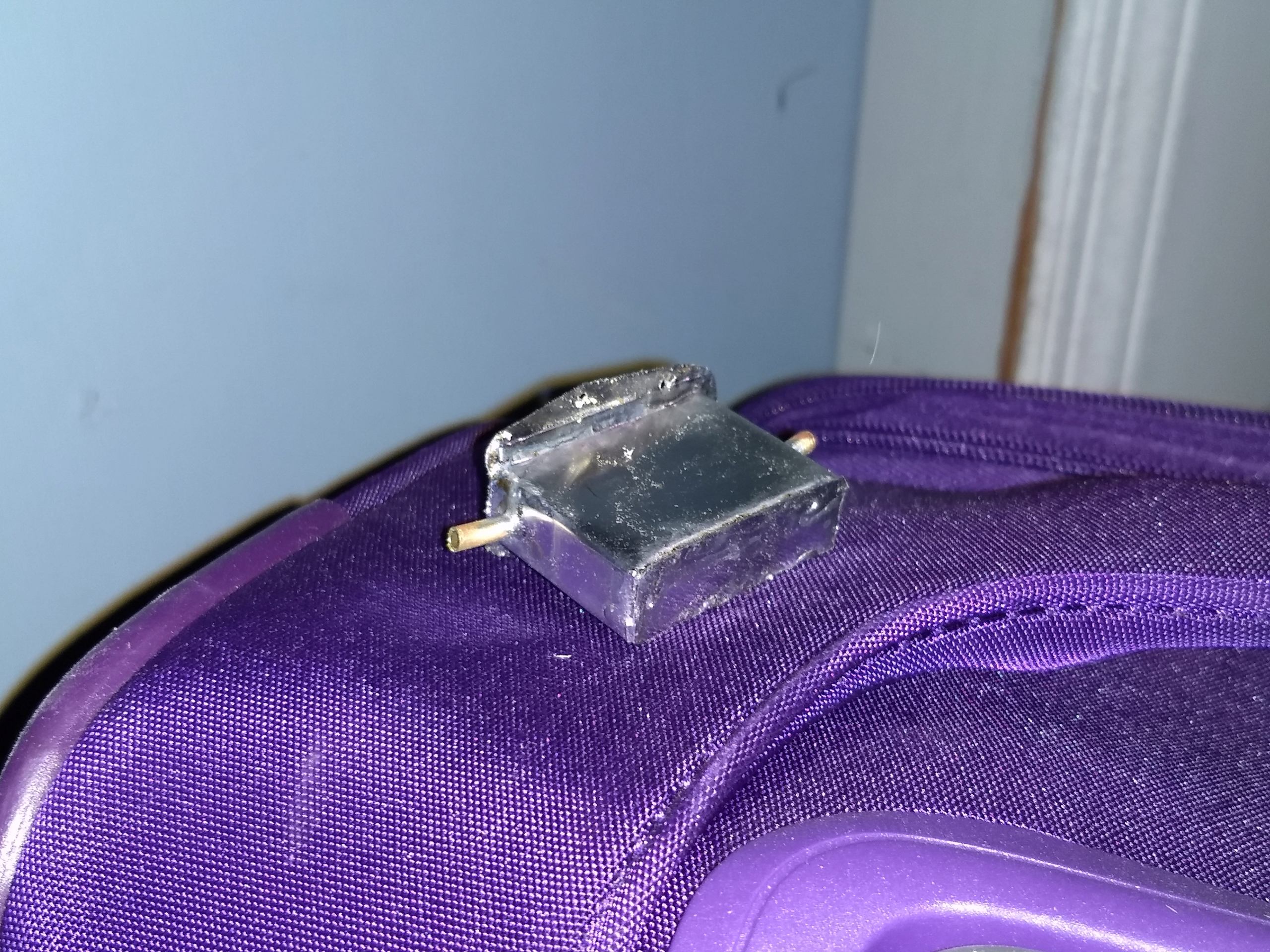 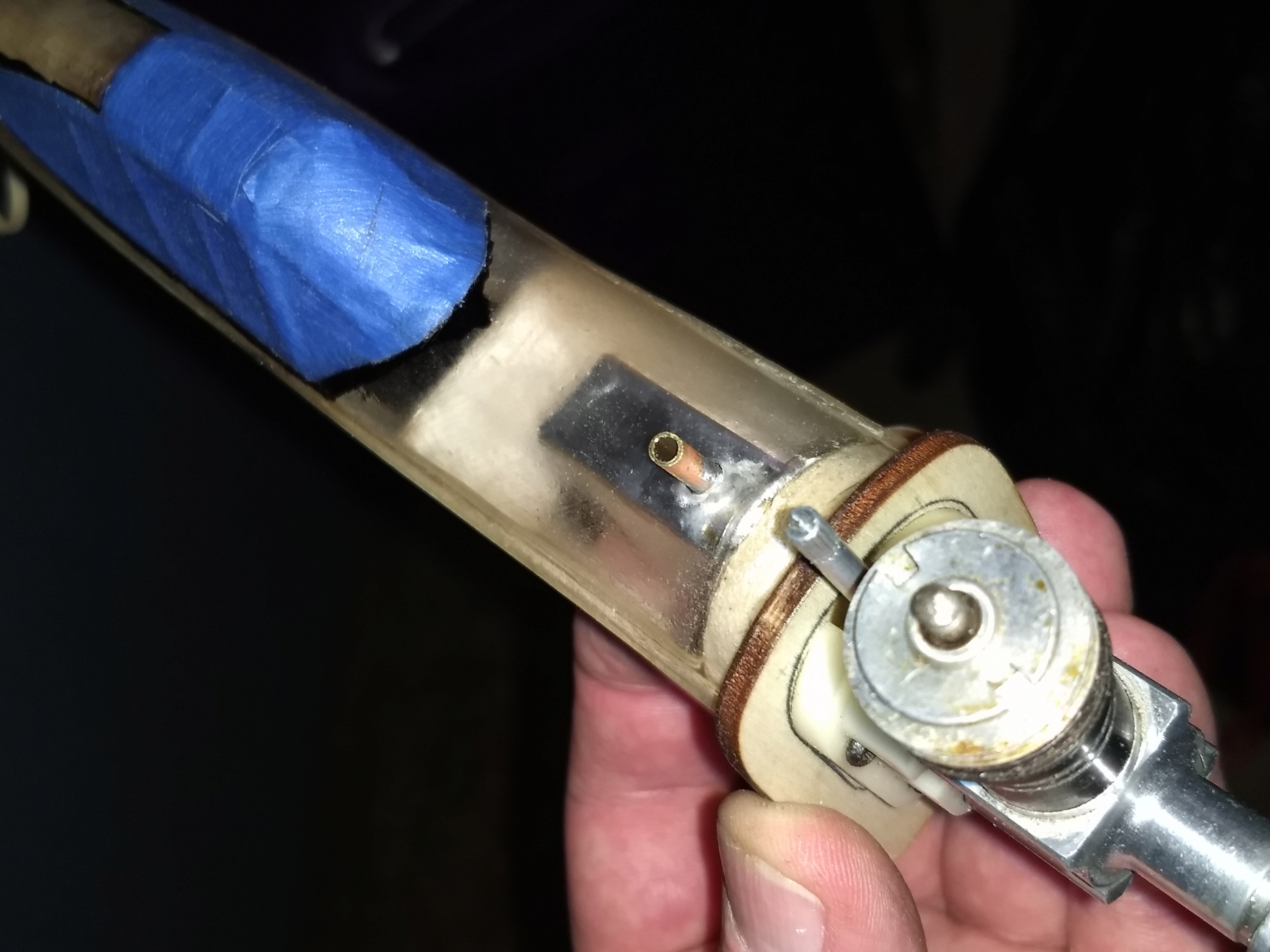 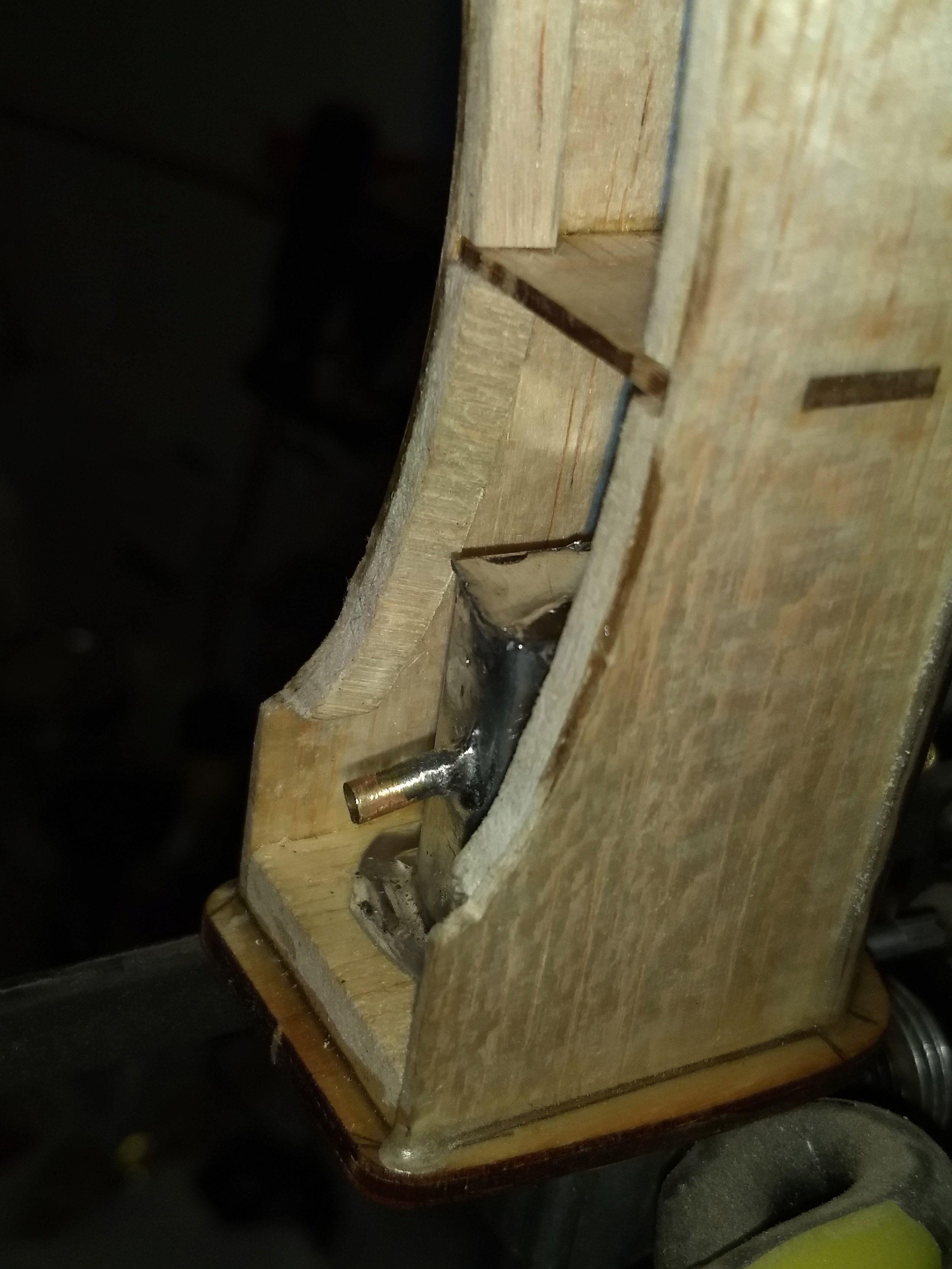 I'd like to know more about "Docspan". How does it compare in strength with silkspan? Does it take more dope to get an equivalent finish? How do you use it?

Hi Tico,
I read about it on Stunt Hanger. It is exam room table paper. The stuff you sit in when you visit the doctor. Dan McEntee (I think I have his name right) have me a sheet to try some time ago. I measured the weight for a given size, and compared it to Guillow's paper. I coined Docspan for it, most of the SH guys call it Doctor Paper. Size for size, it is a bit heavier than Guillow's paper, more of what is probably used for larger, mid-sized planes. When I say a bit heavier, I mean by just a few grams for a 18"x18" sheet of each.
It goes in just like the stuff we love to dope. There is a weave, or grain to it. It wets the same and pulls tight the same. It dopes the same.
I bought a roll several weeks ago for $11.50 delivered for a 21"x125' roll. I find the grain goes the long way on the roll, so cut enough for a wing, and mark the left over pieces so you don't lose track of the grain.
I'll try to get pictures of the wing now that it's got a fair amount of dope on it. Don't make the mistake of using several coats of Super Coat on it, it will shrink hard enough to ruin a wing! Ask me how I know.
Back to the tank...the feed line wound up interfering with the wing a smidge. I do have a chunk of balsa behind the scarf joint, so notching the LE won't be a problem. I blobbed a bit of epoxy on the top of the tank where the fill tube penetrates the turtle deck, so there shouldn't be a problem there either. 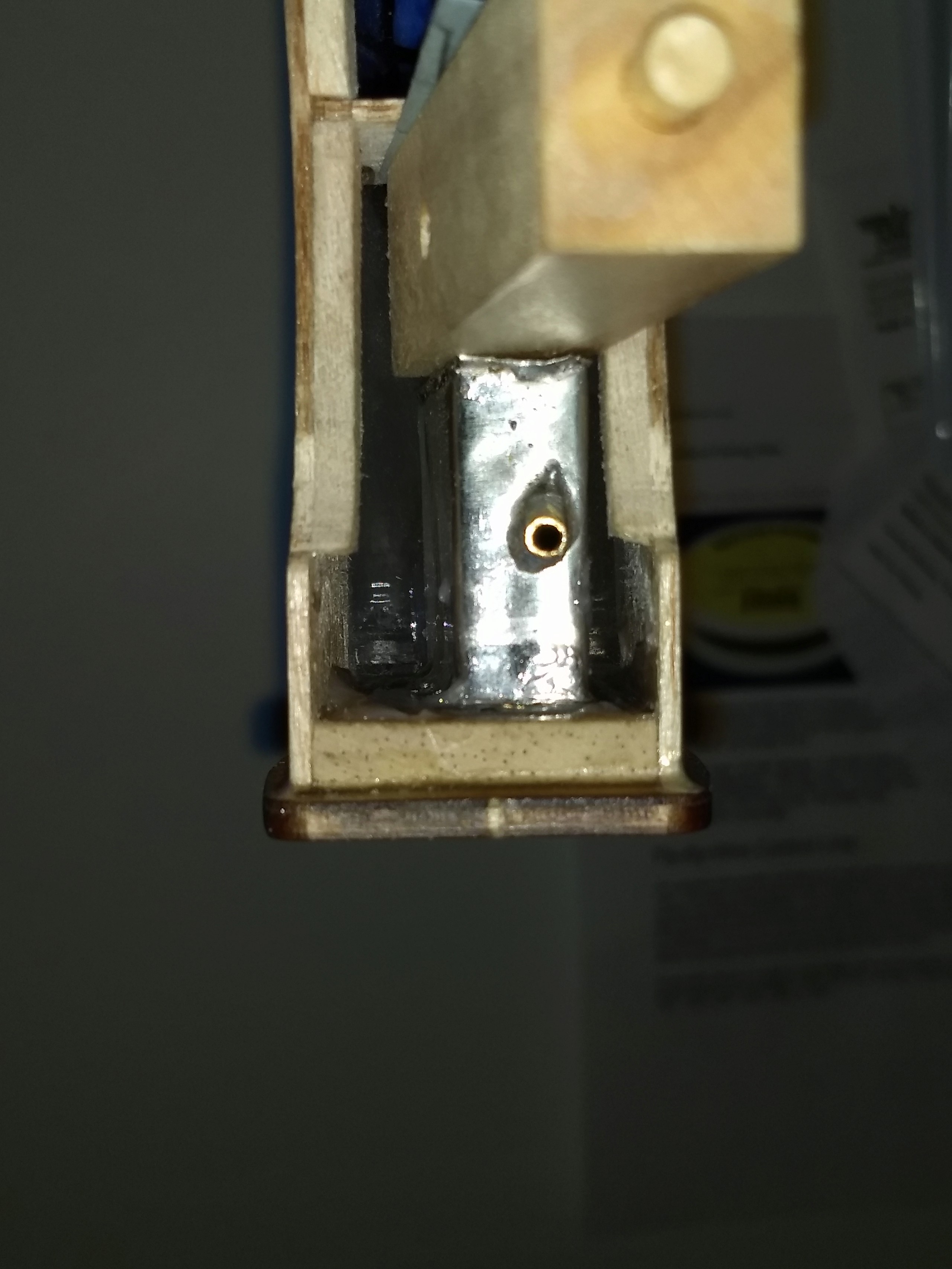 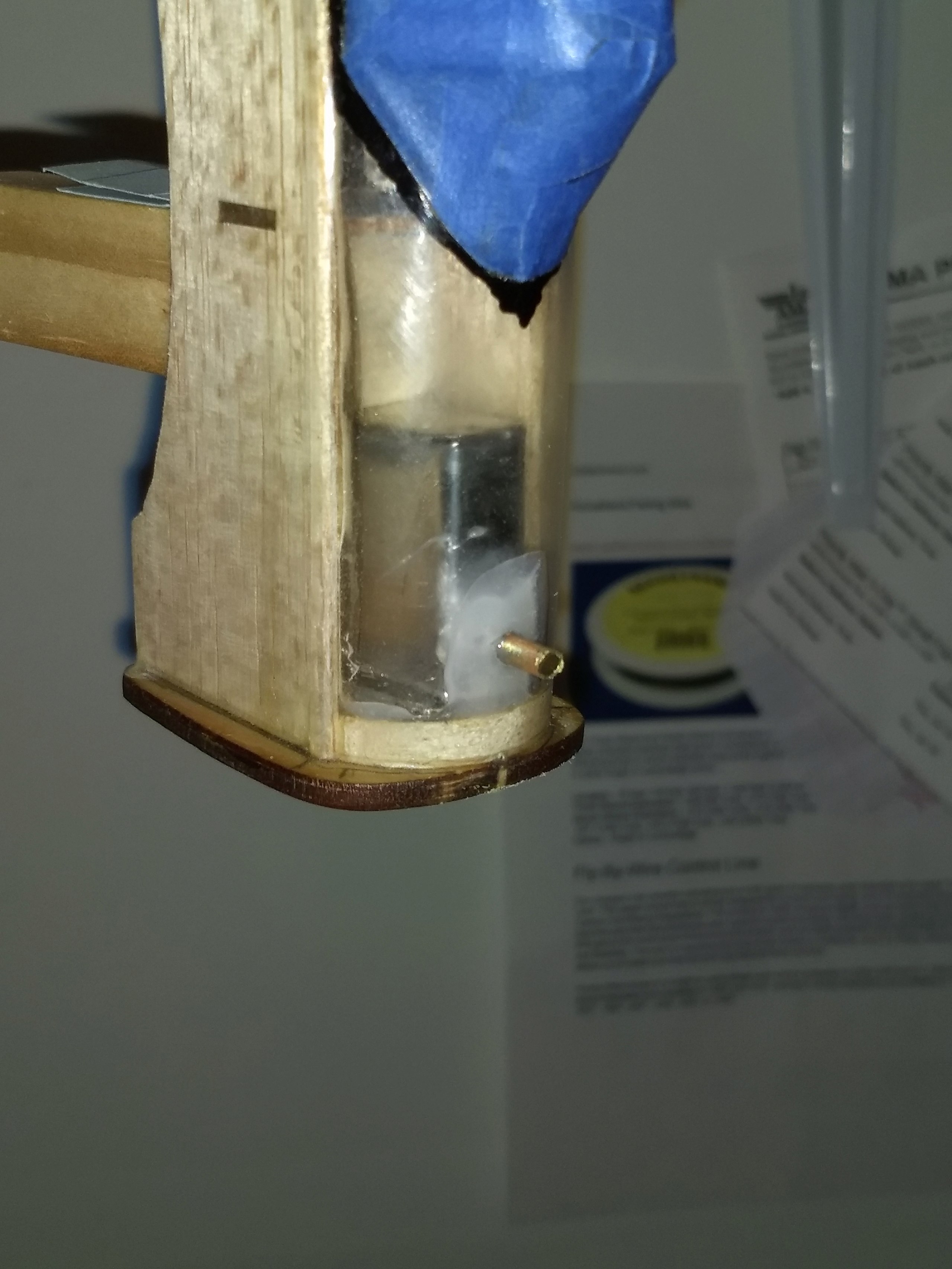 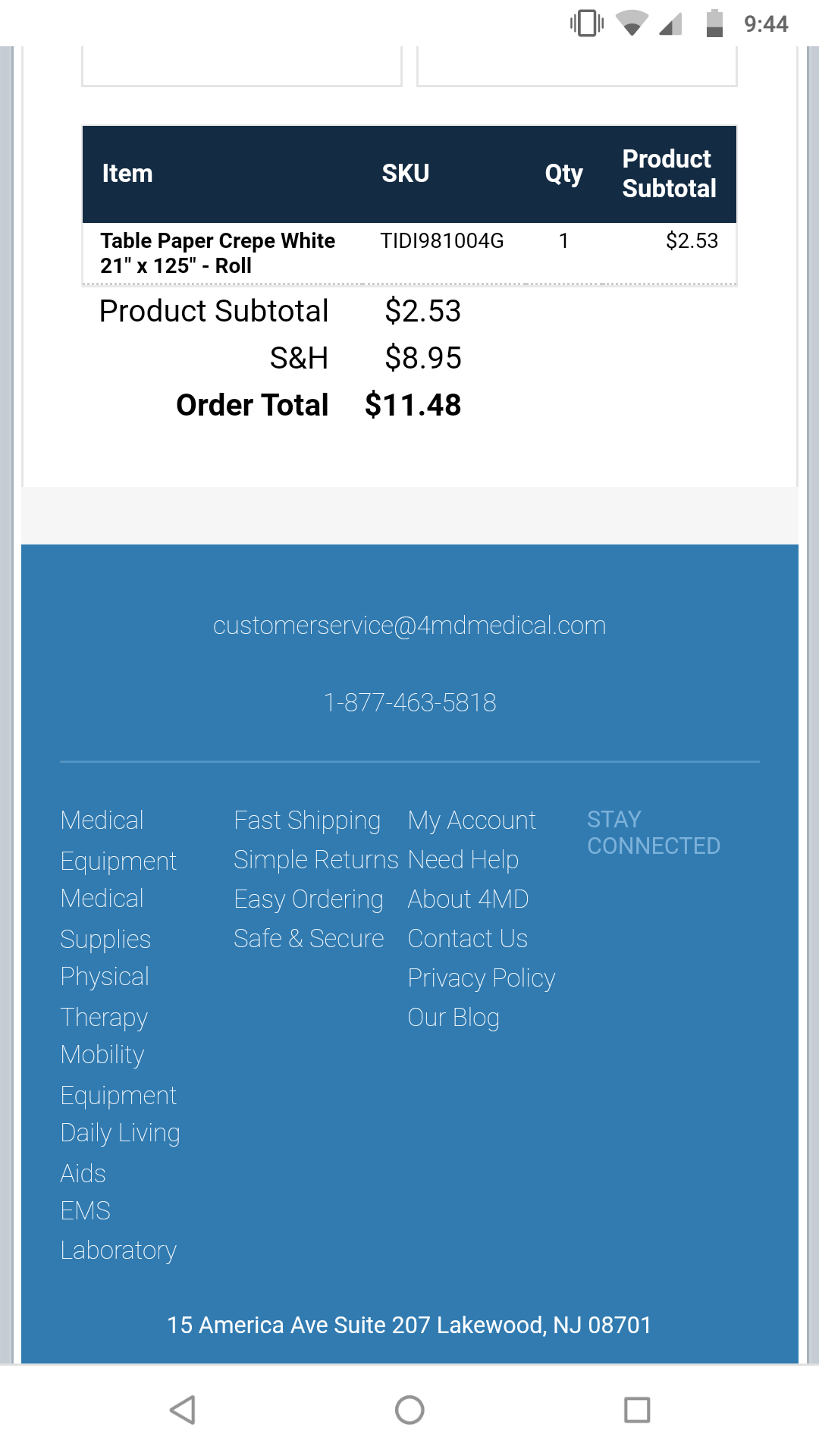 About four coats of SuperCoat clear. The first one was thinned, the next one wasn't. Then I repeated the pattern. This stuff is drum tight..check out that minimal swag between the ribs. It fills pretty quickly too...look at that sheen. 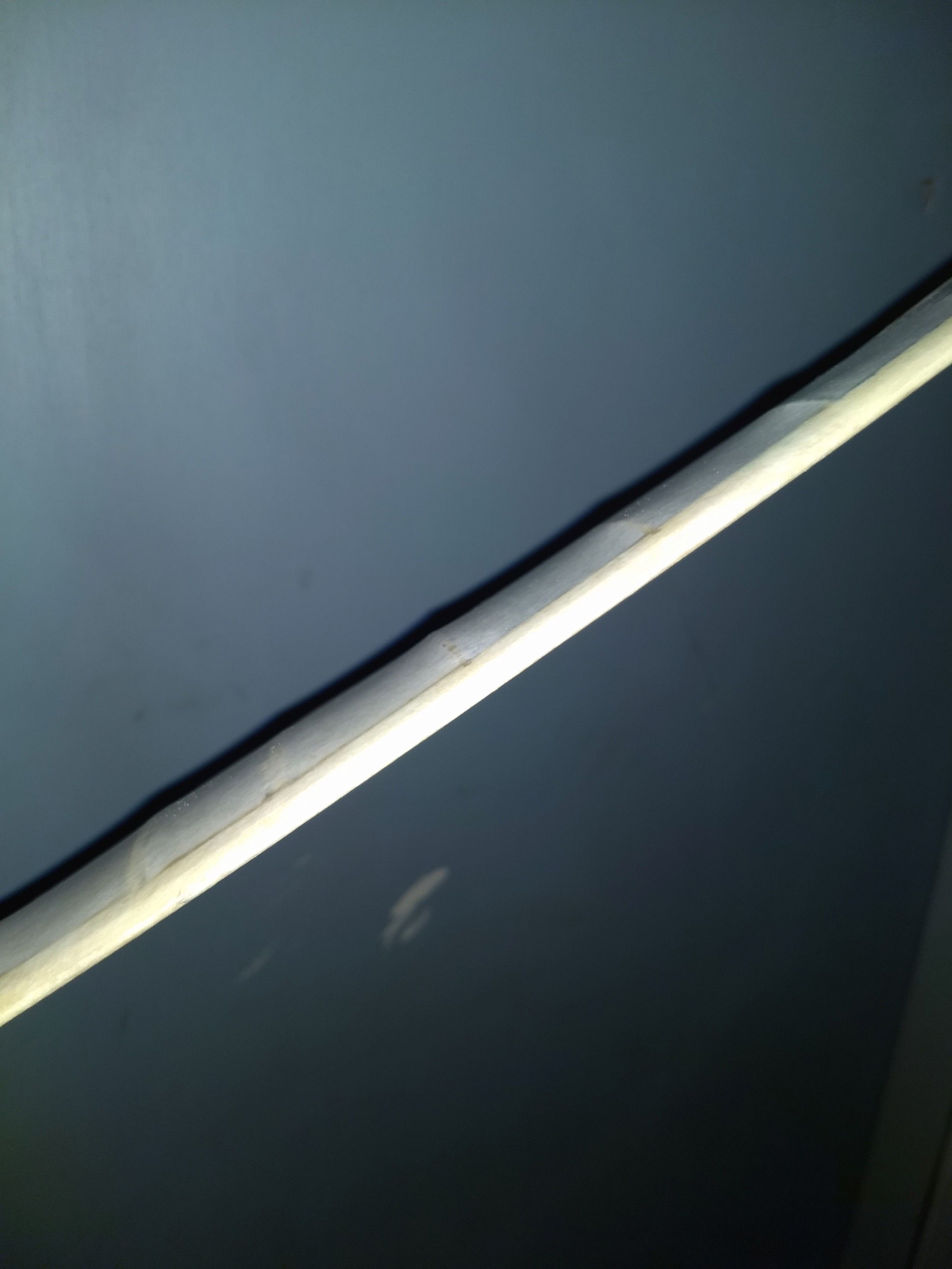 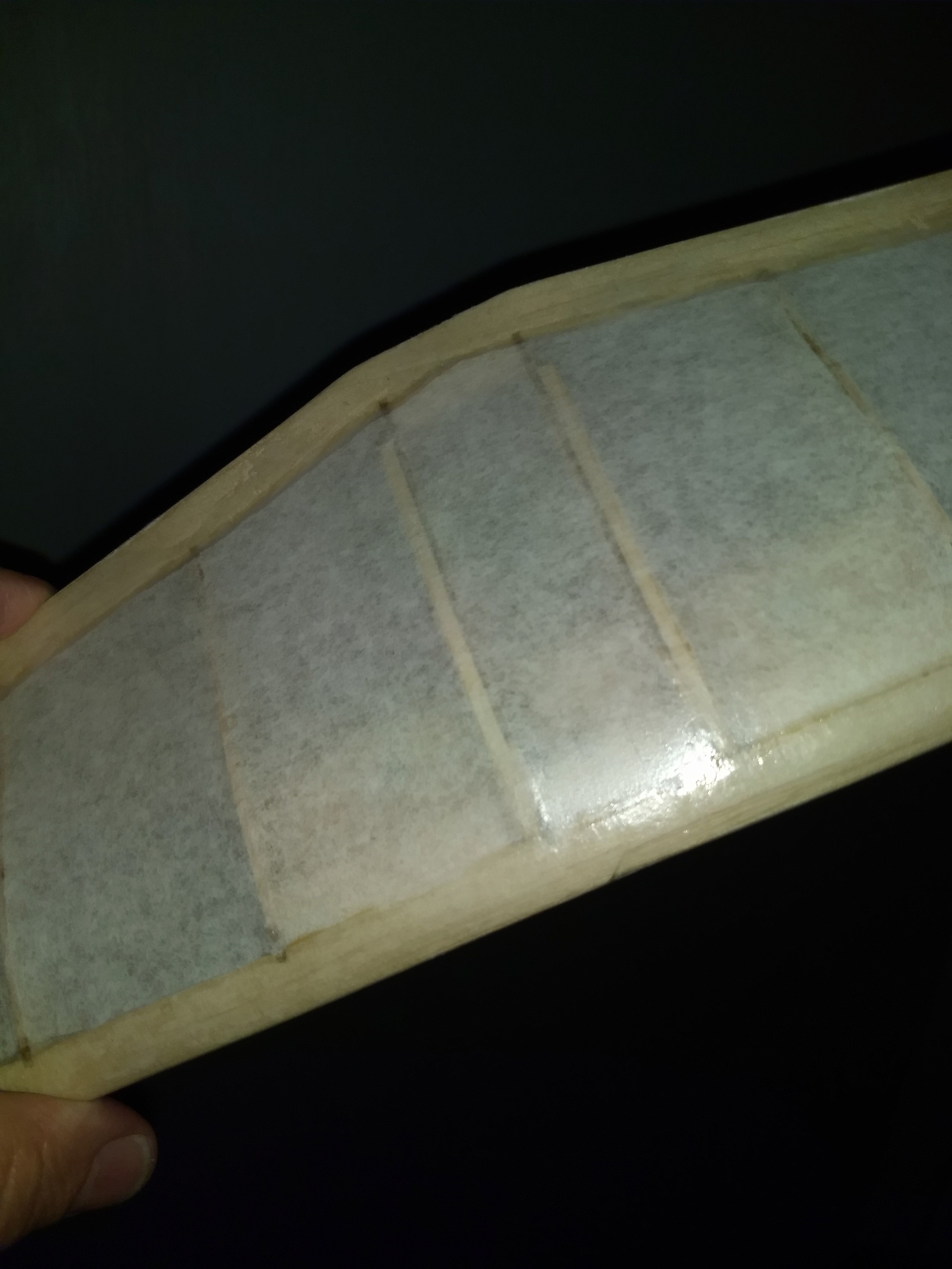 Do you put it on dry and then wet to shrink or is it put on wet like old school silkspan? Can it be dyed prior to use? Is it as puncture resistant as med. wt. doped silkspan?

Darn Jim that looks Really Good and the price is right too ! I am with Tico, Dye Color ect .

Guys,
I haven't tried dying it. Never done it, but do need to learn the process.
I put it on dampened with a fine just spray bottle. Got it "pliably wet," just like the stuff I grew up using.

Puncture resistant? Dunno. I haven't flow this one yet. I will say I used the same stuff (Dan McEntee's piece) on the bigger Scientific P-40 I bashed into the ground a few months ago. That paper was pretty tough. You can see from the damage that the paper tore because the wood was trying to escape the carnage! You could say the bones jumped out of the skin.

I did use the end of the roll, where the paper was pretty beat up. Yet it handled just fine once wet. No ill effects of being wrinkled in that finish.

Tico and Getback, if you guys have a small wing you are covering, I'll snail mail you each a sheet long enough to cover your wing. Just PM your phys-address and wingspan. I'll cut a sheet long enough plus 2" so you can trim, dope and pull to evaluate. This stuff is 21" wide, so if your root rib is 6" long, you'll still have enough scrap to do a stabilizer, or paper each side of a fuselage. Your sheet will be wrapped around a piece of corrugated cardboard to minimize folding/creasing. I think if I cut the sheet down the middle, it should fit in a large manilla envelope with only a few folds/rolls. Let me play with the origami angle before I send it. It may roll into a paper towel tube just fine too!

The StuntHanger thread even has a YiuTube link/video of one of those guys using this stuff.

How I used to dye silkspan (to best of my memory) :

I used RIT all purpose dye in powdered form, but I guess liquid will work too-- this was a long time ago. I don't see powdered dye at the RIT web page.

Dye should be mixed to double the concentration that instructions indicate. Immerse the silkspan in the solution, swish a minute or two, remove and squeeze out the liquid. You can precut your panels, dye and apply to plane right away just like a wet piece of plain silkspan or you can dye a batch of complete sheets, dry and fold and store for future use. Once a couple of coats of thin clear are on the main base color of dyed silkspan you can proceed to overlay trim work with dope using other colors of dry dyed silkspan or dry gift wrap tissue. The only dye colors I had experience with were yellow, orange, red and black.

Thanks Jim , But not going to do any soon and would need a piece big enough for a 35 size plane . But do find it interesting , Tico that sounds right for the dye procedure