Ooops I did it again

Ooops I did it again

I was watching this group of engines on eBay and got them for the asking price as the only bidder. I was mainly interested in the .049 X and R as don't have either in my Cub collection. They came yesterday the original long stroke cub looks almost ready to go as is the X & A should be just fine with the parts on order from Ted at OK( I thought I had a pretty good shot at getting these engines so I added the parts I thought I would ned to my order from Ted). The R's piston is missing and it has a ball & socket rod on it like a cox, I have never seen this before so I sent Ted an email about it but he usuakky takes about 2 days to get back to you right now, apparently people believe that he is going to really retire this time and are getting in their final orders ! 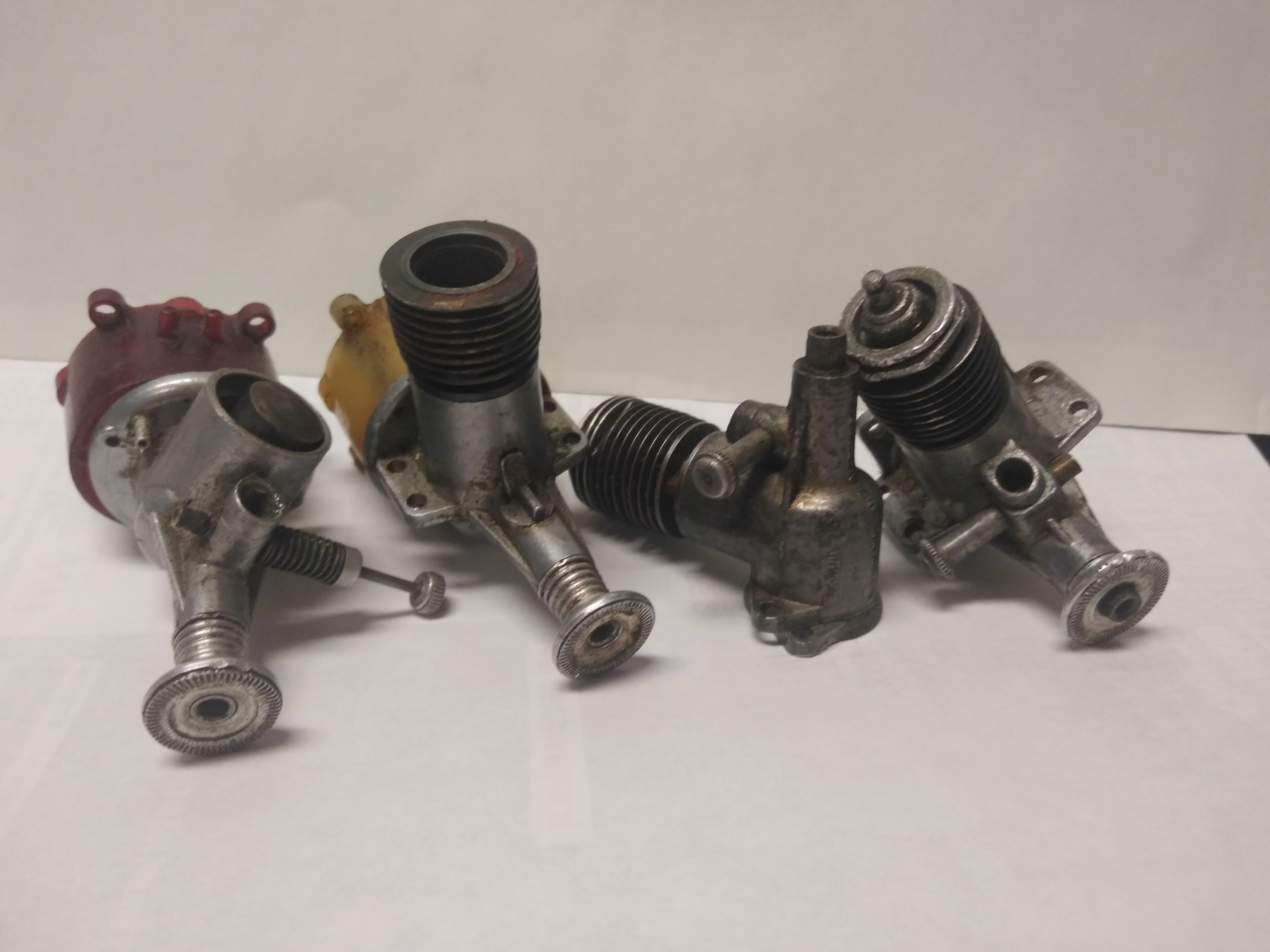 Oooops I did it again

Hi Yak. I know others will post with information on what you just bought, if I may add some to this. The .049 X came from the .049 long stroke design, The X engine has a bore of .420 with a .360 stroke and was their first higher rpm engine to come out. It looks like you might be missing either the back plate or the fuel tank as they came with, to seal off the crankcase. These would be unchanged till around 1955 when the B engine then came out. The long stroke that you have is just that, it was designed over square. With a bore of .390 and stroke of .415, not a real high rpm engine but some what more power. The .049 A engine with red fuel tank, if it has the round steel connecting rod would have the latter re-designed piston with it. It does look like it has the aluminum fuel pick up tube through the back plate. It would have a different spray bar with a distinct ring around the fuel inlet end, and be smaller diameter there than other spray bars. This engine could have come with the newer cylinder and glow head. I think Ted might still have matched piston and cylinders sets for these engines left, and you should try to get one set. These last engines were somewhat more powerful over the glow plug versions. The .059 was the reed version of the long stroke, with a true square bore of .420 and stroke of .420. but suffered with the infamous ball socket pull out, that it's big brother the .29 and .35 suffered with. The socket under the piston is not true ball and socket as to the Cox. But it is more of a swag crimp of 3 or 4 contact points to the ball it'self. With minimal wear along with low percent castor oil use, this will accelerate the wear and then the ball will loosen and eventually pull out. There is no fix for this, except another matched, piston, rod and cylinder set, which Ted also had of these. There was never a tool made to reset the socket, as the metal that formed the swag was harder than the socket of a Cox piston, and was only set at the factory. Another thing on the Cub reed engines, some came missing the flow ring that sets just in front of the reed, the reed is very fragile and has a slight curve at both ends for the reed retainer to hold. These were my least desirable of all the Cub engines I have owned.

Good job and great bit of history and information. Save the Orphans !!!!!

Hhmmmm, this castor addiction has another affliction! OK ? OK Cubs. My main interest has always been Cox engines and parts, but when buying “lots” off EBay, or CL ya sometimes get little tidbits of other brands. As a youth, I primarily bought and used Cox, just to keep MRO costs inline with my paper route budget. I did acquire a few WenMac /Testors engines from the Freebies offered by Coke/Sprite sending in bottle tops or Proof of purchase tags. Now I see those same NIP airplanes or Race Cars with asking prices of 120-250, not that they sell ( or I would buy) at that price, I had a ton-o-fun flying and crashing them “free” toys. Oops got off tangent here, OK! Some lots did have bodies of OK Cubs. Two separate lots, one lot with a couple complete engines, crankcases/cylinder/piston(con rod snaped) , another lot with red plastic ( now,I know as Nylon) gas tanks, aluminum tanks, and stuff. Looks like with the purchase of a gasket set or two, piston/cylinder/conrod, I could have a nice set of three, one A and two B’s. Now off on another tangent...build a willie-nillie 049 Cub kit powered by a OK cub engine = a Cub powered Cub!!

Ok, I did some checking on my lunch break , The long stroke .049 is pretty much good to go, The .049 X needs gaskets and backplate screws, The 049 A has the cylinder threads stripped out of it, The reed valve engine appears to be an .06 with the piston & cylinder missing. I am going to use the A for parts the prop driver can go on the X and the crank piston & cylinder will go into the reed valve engine as long as the crank pin clears the reed spacer I will probably fill the crank with JB weld, all I should need is a newer style machined connecting rod. TJ

well I just checked during coffee break, the other crank clears the innerds just fine Frankencub will rise from the dead ! TJ

Yak. You would'a had'a bidding war if it wasn't for shipping cost. I seriously considered bidding on these myself but at the current exchange rate I had to pass. Got plenty already anyway.

Good job on getting the ole broken engines going again . It's nice to hear one fire up after doing some improving and new parts or just juggling them around Pics.? Yes most my experience was with Cox engines too Rene

I really enjoy tinkering with them , I work on heavy Equipment for the railroad all day, but an hour or 2 in the basement workshop getting an engine running that has been sitting in an attic or basement for 40 or 50 years is just very relaxing to me. I enjoy flying control line a lot too, but down in the cellar tinkering in the winter or playing farmer on our property or being on my Sail Boat always takes me to my happy place TJ

Well I got my big box of parts from Ted at Ok Engine, I ordered heavy because I believe he's going to finally call it quits. I took out a gasket set for the .049 A that I buggered up the rod on last month and cleaned and oiled the bottom end and put it back together I decided to install the top end from the .049X on it after cleaning it up last week just to see how it ran I put a about 1 1/8 oz of 10 % Omega control line fuel in it with some extra castor to help ease the parts back to running again. It took a little bit of time to figure out where the after market needle valve wanted to be set but it started and ran a little rough for about a 1/3 of the tank until it cleaned itself out and the parts got some heat in them, but then it smoothed out a lot I ran it a tad rich until about the last 1/4 of the tank and leaned it out a bit, it followed the needle much better after the fits were all reestablished and it had cleared any gunk out of it's insides that I missed. I think I'll run one more smaller tank through it in a few days after the synthetic part of the fuel has had a good soak on the innerds to clear it out again and then hit it with a little nitro and see what it does. Before I install the top end on the .049 X.TJ 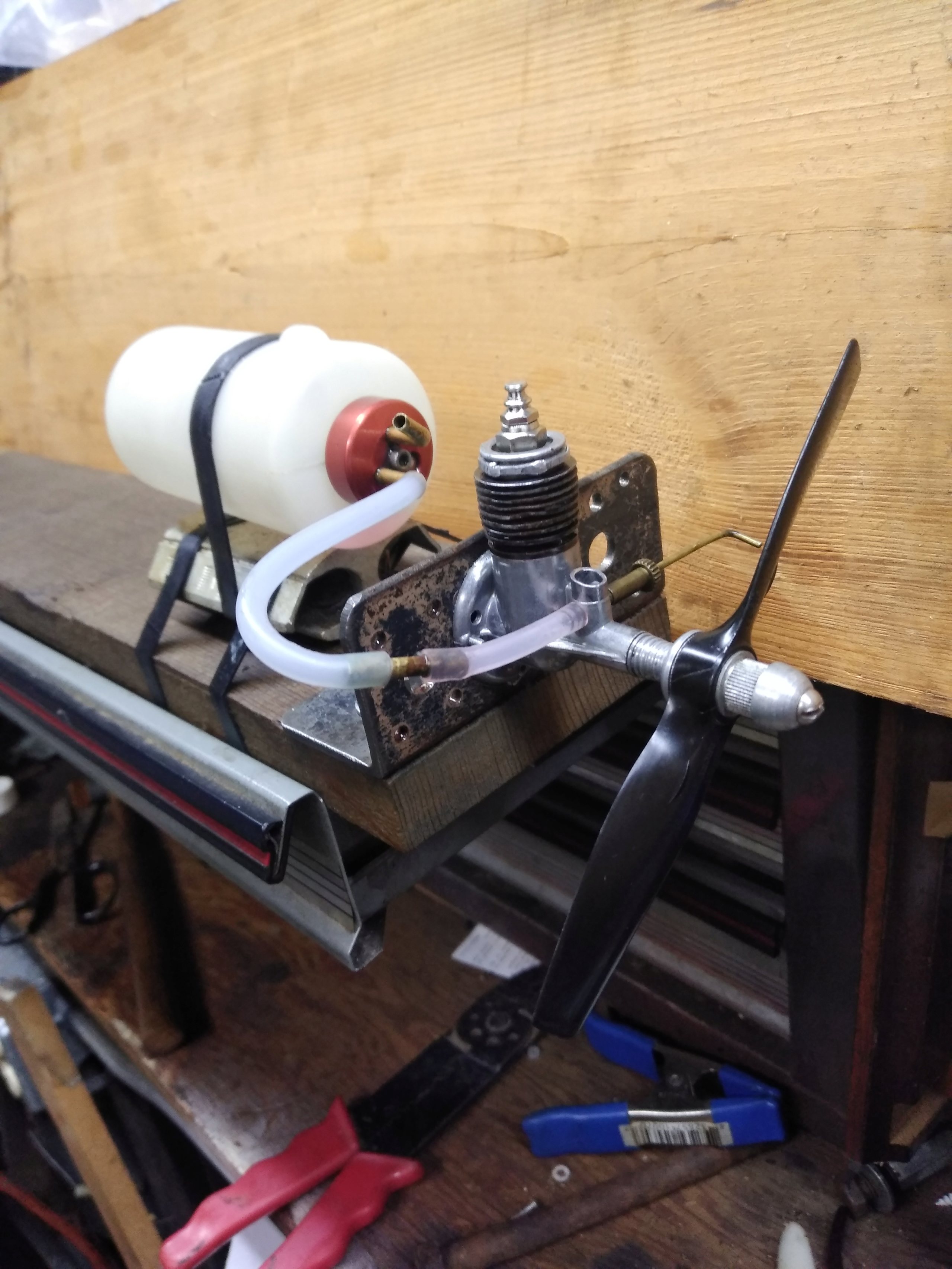 Years ago I sold in a lot 50+ OK, Testors, McCoy, and Wen Macs on ebay. Some were complete, some parts engines mostly .049's. I didn't think they would bring much but was surprised at the final $ total, about double what I expected. I don't think anyone here "won" them. At least I didn't get yelled at.

I had pictures but they went away when my computer crashed. I still have enough of each left over to power a fleet of 1/2A airplanes.

Here's what a $2.00 connecting rod from OK Engine looks like 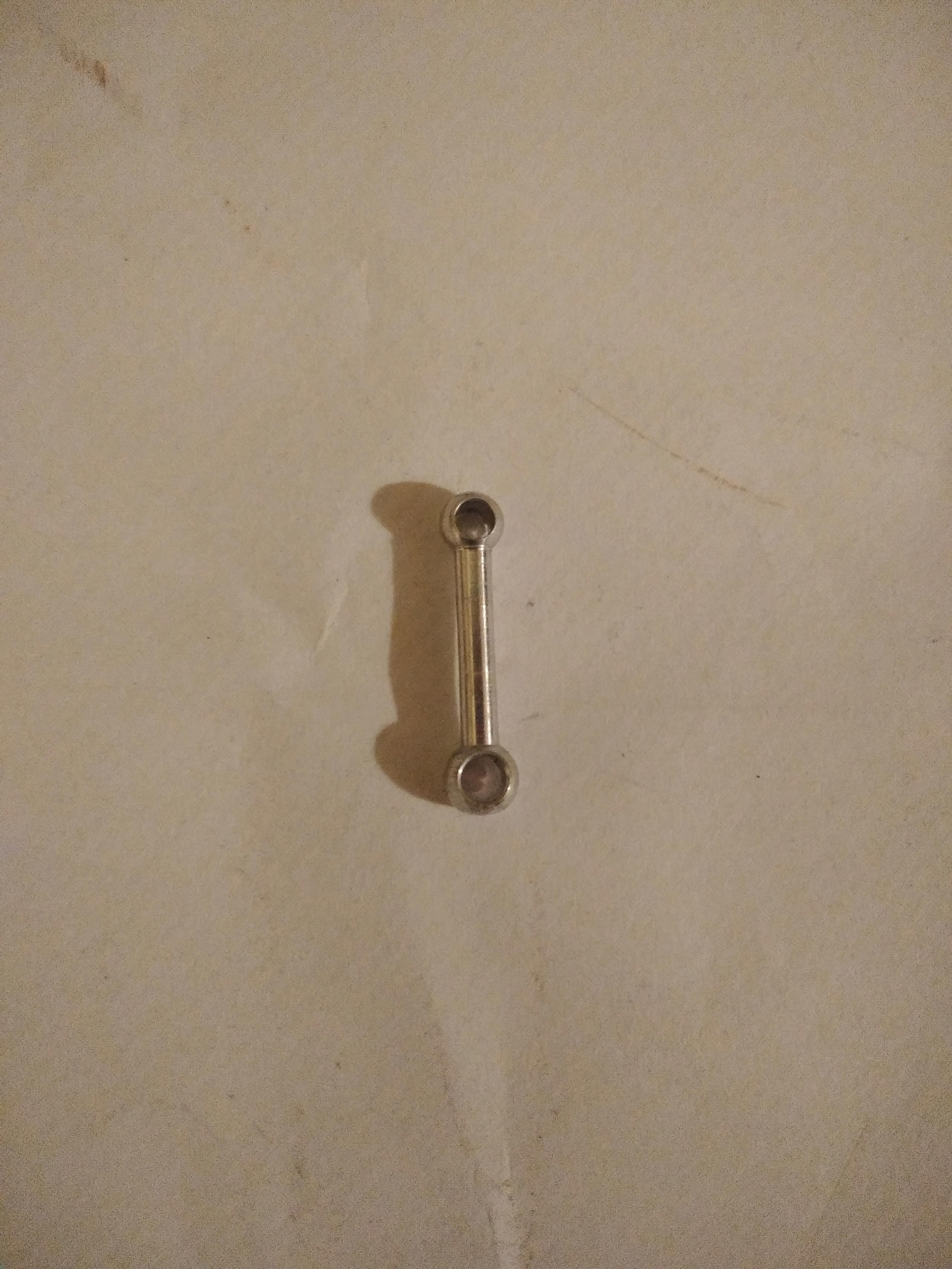