Well, things have been crazy lately, to say the least. Weather being teh biggest problem here. Snow, rain, sun, repeat! Also, due to the weather, I have not yet run any engines. I had been concentrating on repairing my Sig Kadet LT 40, so I have been busy with some stuff. Then the next thing...... Cleaning the model room. So while doing that, I had moved another project I had picked up last year for the umteenth time. It is a Sig Twister. Fuse and tail built and covered, wing built, but needed a lot of repairs to make it remotely nice. It was not assembled well. So I got to thinking. I have a Twister already, and I had talked to my buddy about converting it to RC. He said these make great fun rc conversions as he has a Ringmaster converted to RC. Thought hey, great idea. Sat down, looked at it, looked at it some more, then wondered how long till I would be able to control something like it. So back to messaging buddy again. Said buddy is the one that happened to have the Mini Ultra Stick that we had the bet on earlier that I mentioned in the Ultra Stick Rebuild thread. Well, I was not afraid of the bet we had, but asked if he wanted to do a trade? It was pretty much instant as he liked the looks of the modified Twister, and his dad likes those projects. So the next day we made plans to do the swap. So I now have my Mini Ultra Stick.

With this all said, I had a few little things to repair on it. Amongst them were to both make and install a battery tray/floor for teh battery (don't know why it was ever removed?), reinforce it, install upper hatch support that was missing, made and install a new hatch hold down, make a tail skid to replace the 1" square block of balsa on top of a small piece of 1/4" plywood, glue up a few cracks, find and install servos and ESC. He gave me a cheap 30A esc with it for the big unknown drone motor on its nose, also included. A few hours later, I was done this list, but the battery hatch still didn't work or fit as it should. This is then when I realized it was crashed good at least once and damaged in the front end, hence teh blobs of black whatever near the landing gear, hatch not fitting properly, etc. To fix it properly would take more time than worth, so I did my next favorite repair. Below the rear hatch hold down and just in front of the fuselage former I drilled 1/8" holes on both sides and installed a bamboo skewer leaving 1/4" or less on each side. Put the hatch on and use a small rubber band to hold it on. Good enough for me. Now I just have to be patient and wait for my receiver, extensions and y harness to arrive from overseas..... Then I will be able to play! Anyways, here she is with her big sister and by herself. 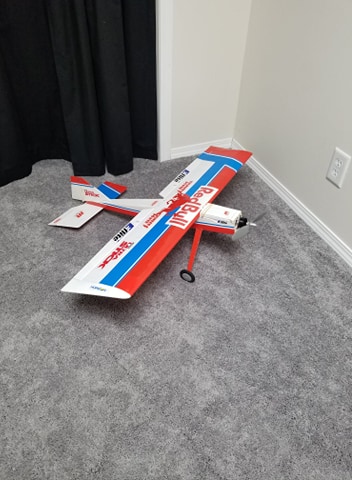 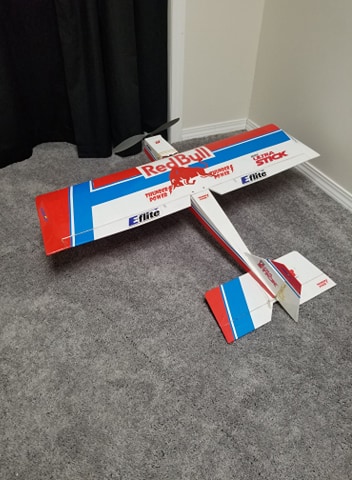 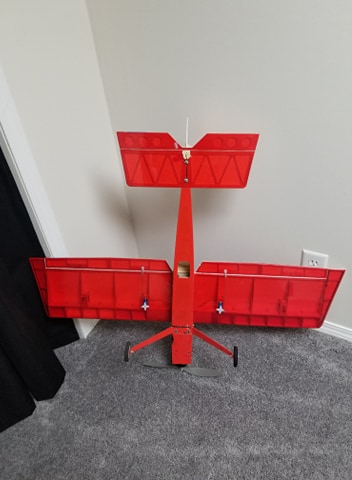 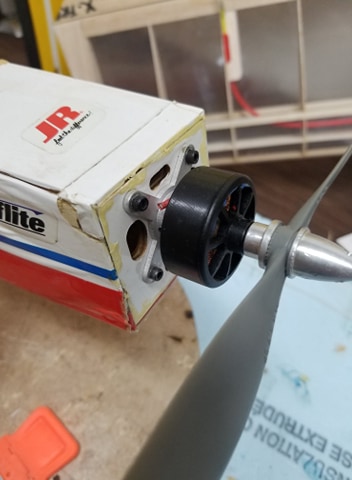 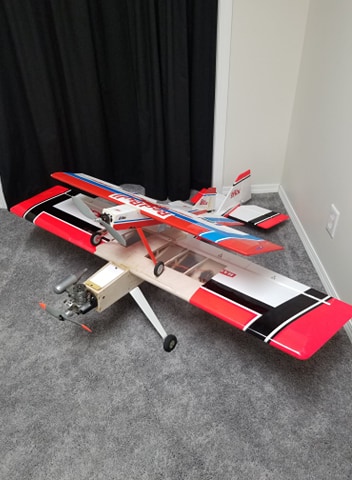 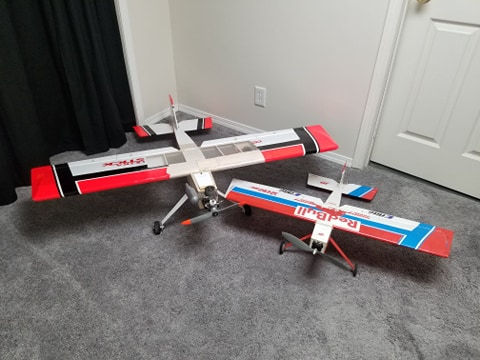 Just two more of the hatch mentioned above and its repairs. The rubber band and skewer on teh outside is self explanitory, the inside picture you can see the skewer on top just below the plywood plate. Can also see the thrifty 1/16" plywood mounting plate with some great plywood! And the homemade velcro battery strap to secure the battery. 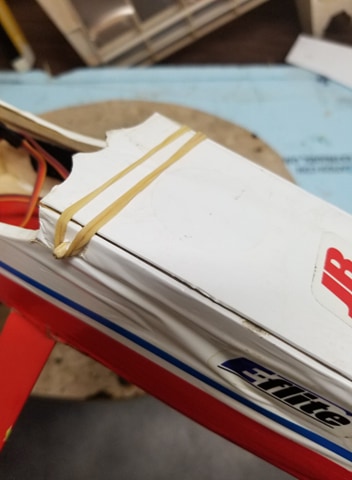 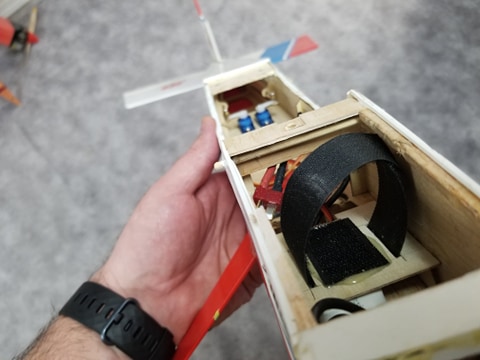 Sweet , if ur happy thats all .. i guess ur going to leave it eleck. ? Looks like the cvering needs some tighten too .

Oh yeah, definitely happy! The one reason I am very happy is that I will most definitely get some good use out of it, more than the plane I traded for it. And on the flip side, my buddy doesn't like to fly electrics, so it would have been sitting there just as mine would have sat here, and he also wanted a project for him and his dad. She will stay electric as it will be something I can play with and fly at the cottage and get used to before playing with it's big sister! As for the covering.... That is a touchy subject. Yes, it is loose in the nose area, but am not keen on using my iron to try and tighten it up as the decal there may melt when using it. But I may try a heat gun on low. The area you are referring to is one that has been crudely repaired and patched over inside. But I may try to clean it up a bit now that you mentioned it.

Good trade.  Electric is just fine.
It's kind of surprising to see people's reaction to electric versus glow.  They'll call the cops if you fly a glow engine at the local soccer field, but the same airplane with an electric motor draws crowds.

The covering on the nose looks like it might be more than just loose.  It looks to me like there might be some kind of damage underneath. I'd take a good look at the integrity of the firewall and wing hold down. The fact that the battery tray was gone makes me think that it may have been crunched a bit somewhere along the line.  Love the piggy back pic!

Oh yes, the covering on the nose is loose, but not no more... I hit it with the heat gun and tightened a majority of it up, as well as a few other places on the plane. Unfortunately, I got a bit carried away on the elevator, and wow, it shrung the covering well... It actually shrunk away from the balsa, and now about 1/8" balsa shows. Oops! Yes, indeed it was crashed good before, and I do suspect the original owner, of which I will be calling tomorrow sometime as we too are friends. I do not want to remove the covering to see, but he did in fact install a new piece of either 3/32" or 1/8" balsa on the inside from teh firewall to teh first former/wing hold down. And the wing hold down is indeed secure. I checked it prior to repairs, but after making and installing the rear hatch hold down I did add some extra glue to the joints mentioned even though they were good and solid. And yes, I am sure that the battery tray was broken whenever the other damage had happened. I dare not take a picture of the landing gear mounting as it too is a bit ugly, but now also solid........ Apparently the landing gear mount is/was a weak spot for this plane, along with its big sister the 10cc which I also have. I have found some plans online that I am working on at resizing so I can scratch another. I am starting to like these 'Stick' planes.

"Stick" planes are great fun to fly and easy to build. The mini-stick should do fine with a Cox .09 engine?

Very nice models to have fun, NEW222 .
As Dave says, electric models attract?! ... Well, I don't really know, things may be different in different parts of the world.
If you go here to fly a glow model in some relatively urban area and start singing a Cox, right away you have a public hahaha ... and they ask for more !!
Well also my neighbors are not very happy when I light a Cox in the backyard, hahaha, but until now, no one called the police ... hahaha