» Crash Free weekend and I did Fly
by FlipStart Today at 4:07 am

» music vids.. some of your favorites
by FlipStart Today at 3:55 am

» The resurrection of the frankenplane
by davidll1984 Yesterday at 8:04 pm

Are the old K&B engines any good? How did they perform say against the Fox's in that era?

Greenheads are ok in my opinion. Many had the exhaust on the opposing side so you get hit in the face with exhaust on a profile. Essentially it's similar to a Mccoy in construction. They had fiber head gaskets that would blow out, the same brass end pads on the wrist pin technology that ruins the cylinder due to cutting grooves in it. Three head bolts hold the jug on and I've seen them blow off due to the screws pulling out or breaking. These engines are loud, putting a aftermarket muffler like strap on Tatone versions will end the lifespan quickly.

Thank you Ken for your input on these engines. Trying to gather on different engines i have no knowledge about in case i come across something to pickup.

K&B, Fox, and McCoy are good engines. Treated right you'll get a lot of good use out of them.
I run 10% Nitro, and run 25% caster oil. Those old engines need their castor oil.
My Fox and McCoys crank runs in a steel sleeve. The later McCoys with the "Lightning bolt" on the side (which I have as well),
those crank runs in a bronze (oilite) bushing. The McCoy lightning bolt engines are the ones to get!

1st thing I do when I get the engine is to look it over and see what condition it is in. Next, go to MECOA and see what parts they have for my engine. Then order the parts I think I'll need (gaskets, new screws, prop washer, prop nut).

Then I tear it down (using a heat gun when parts are stuck) and ultrasonic clean it.
After the sonic cleaning, I am able to really see the wear (damage) to the engine.

While waiting on the parts from MECOA, I reassemble the engine (without the gaskets) and carefully look over every mating part for a problem with both parts together.
One example is on the McCoy. On that engine they use a nylon button at the end of the crank to take up the play (for/aft).
Over the use of the engine that button get worn down, especially if the previous owner uses a starter on the prop and jams the shaft backwards into the back plate. 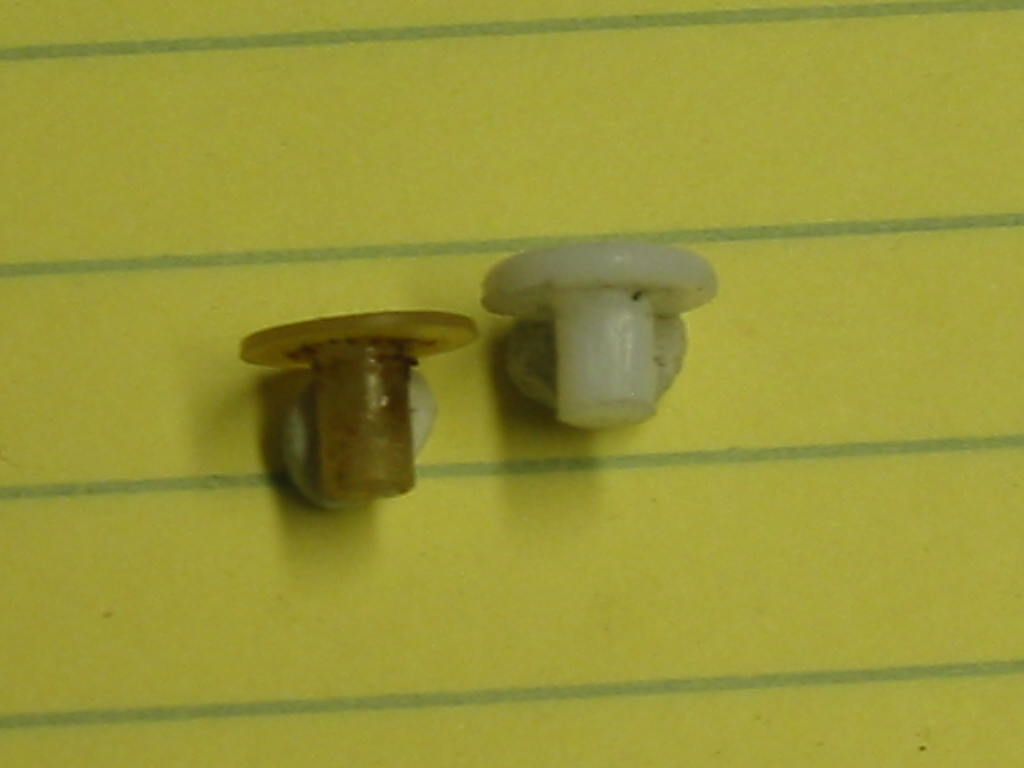 New Teflon button in end of McCoy crank and photo of button and back plate (.005" clearance). 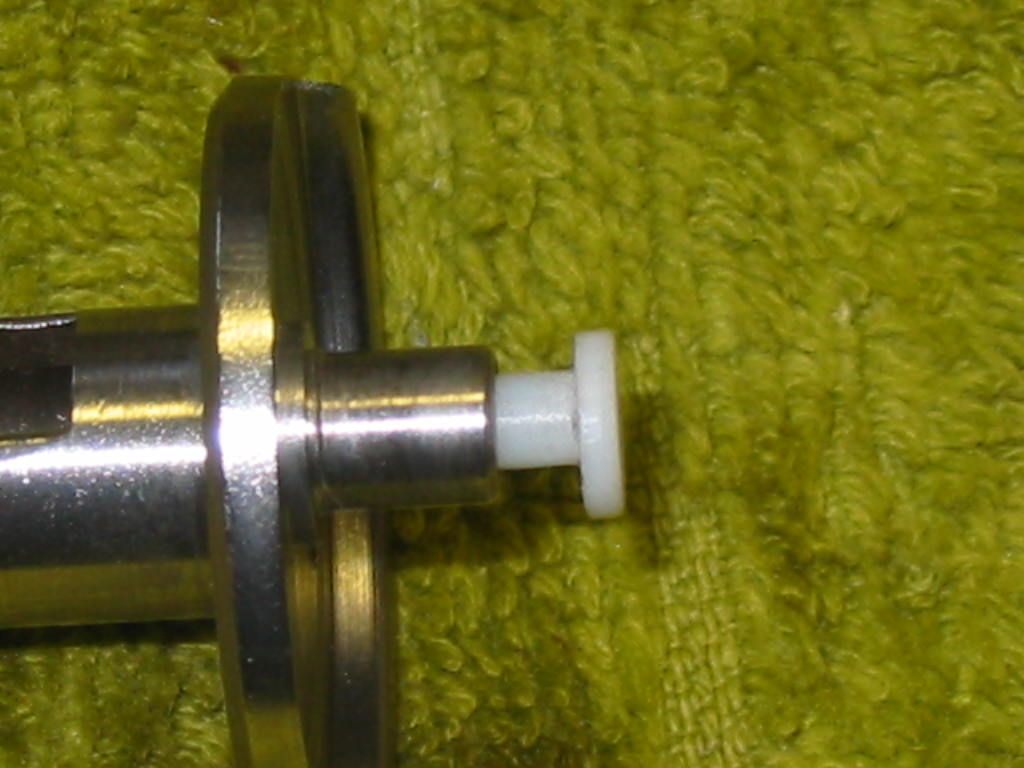 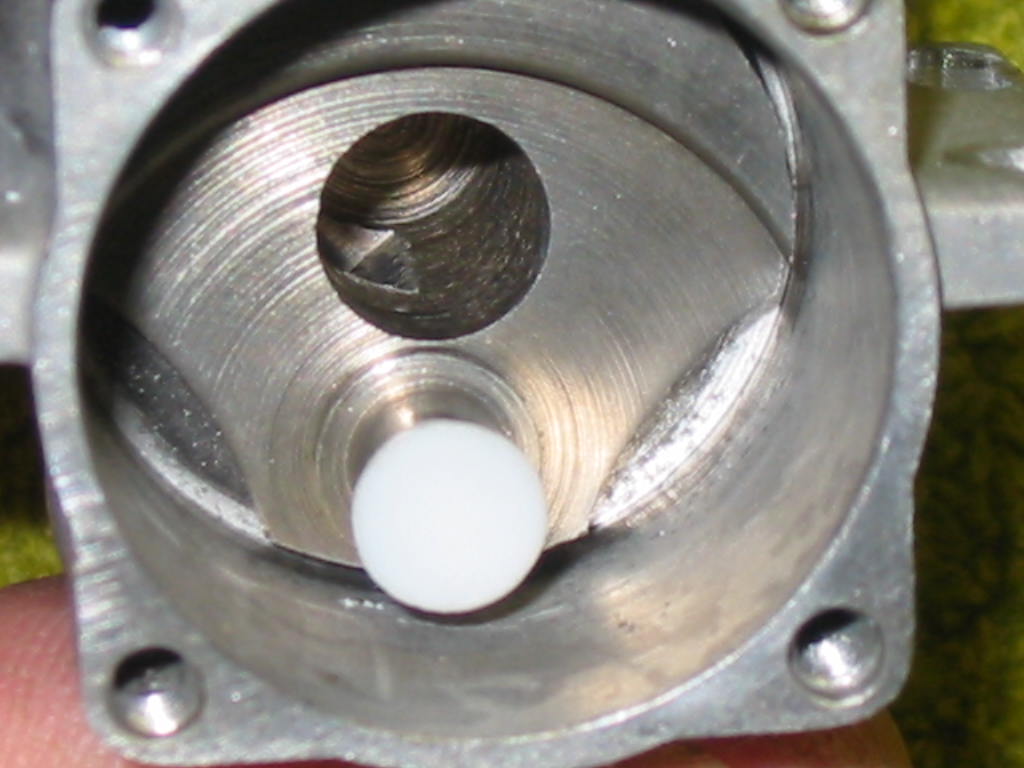 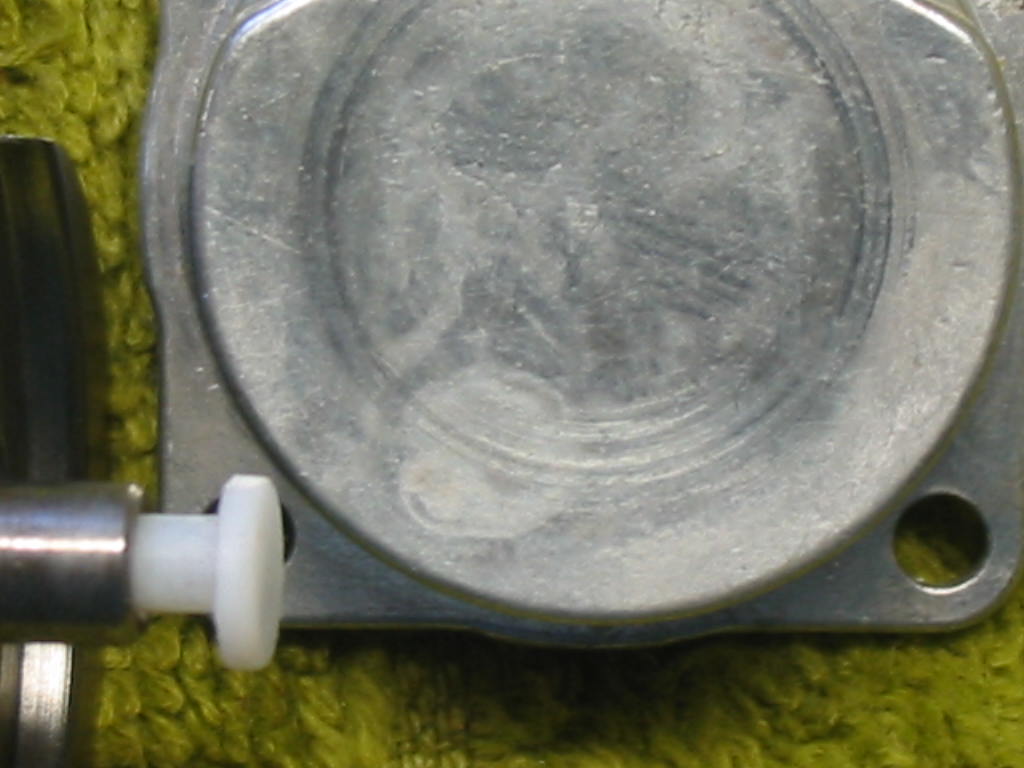 photo looking down the sleeve bore to the crank end /button/ back plate. 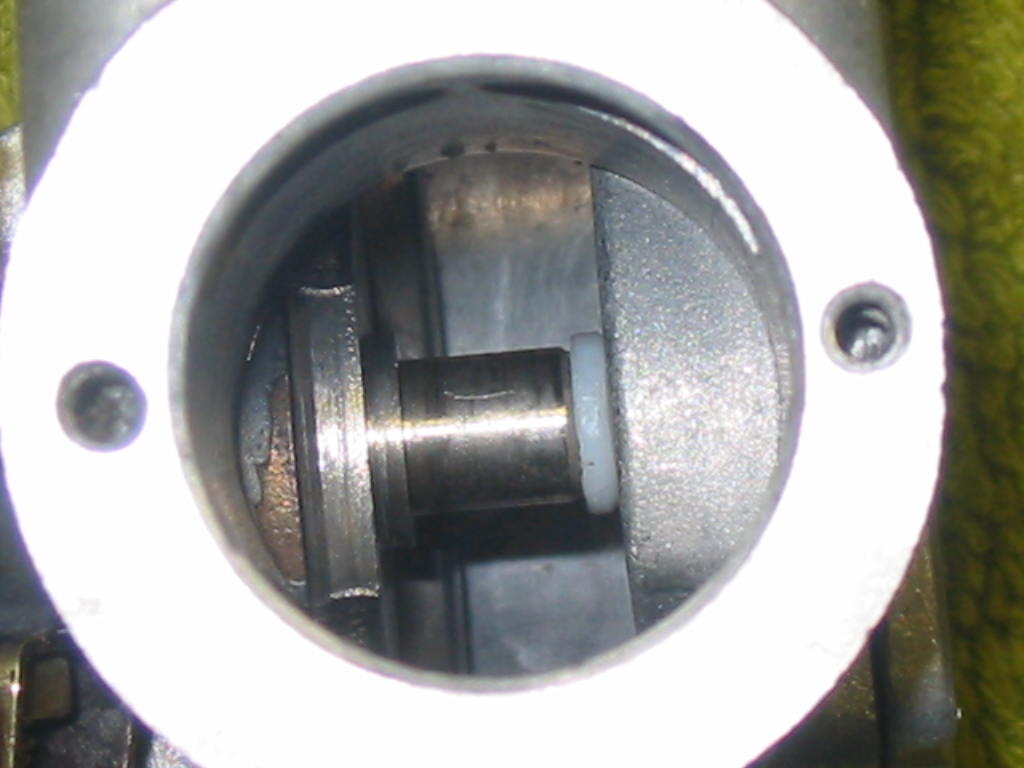 Then I look and see how much play is in the from with the prop driver. I then make up "copper" shims to take up the excess play at the front as well. 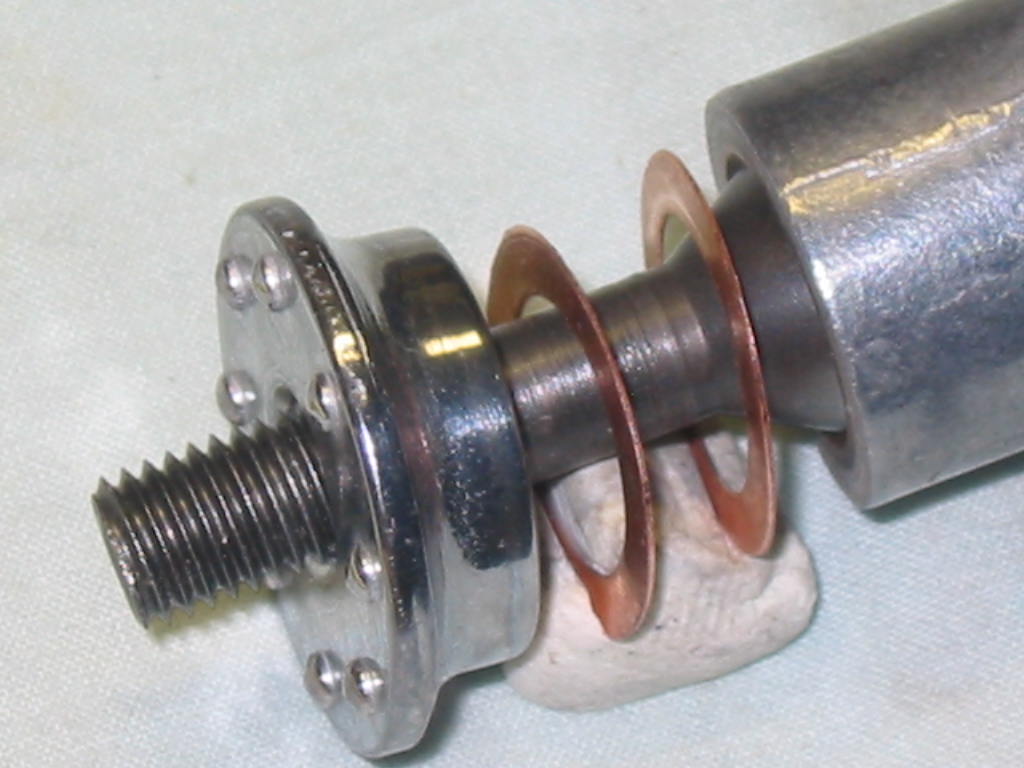 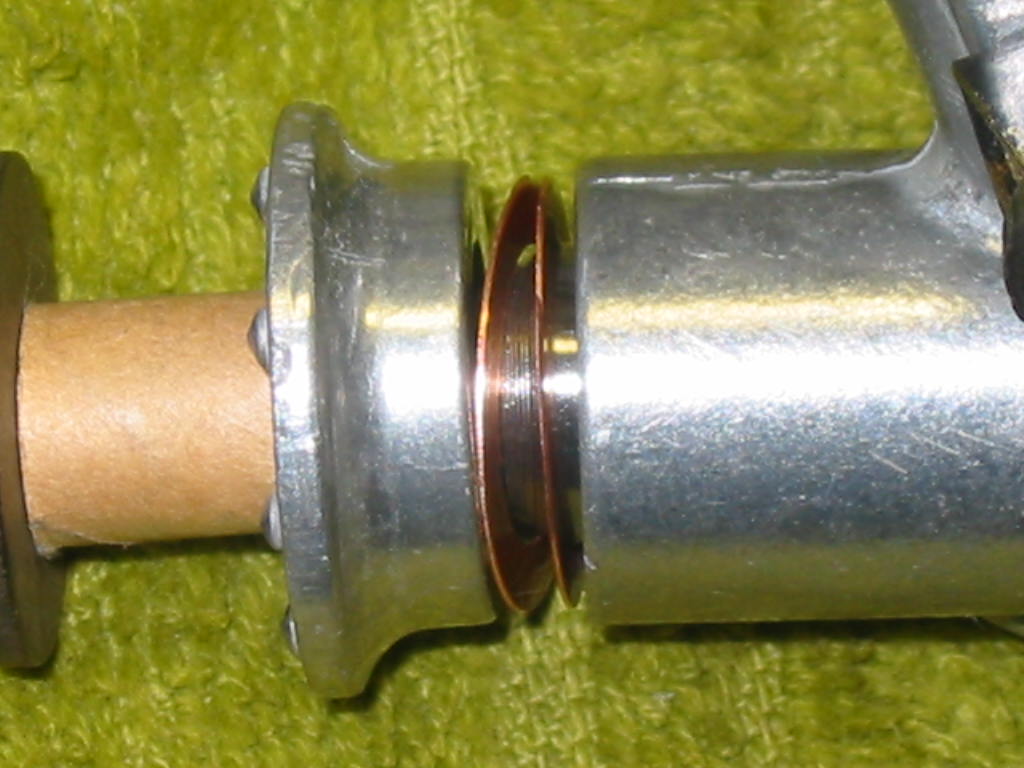 These are the small things you'll have to look at on your engine. As for the brass buttons on the piston wrist pin. I have had no problems with the brass buttons when I use 25% caster oil and the cylinder sleeve isn't scored.

Been flying Fox, and McCoy engines since the early 1970's. in a Goldberg's Cosmic Wind, Ring Masters, Magicians, Noblers. 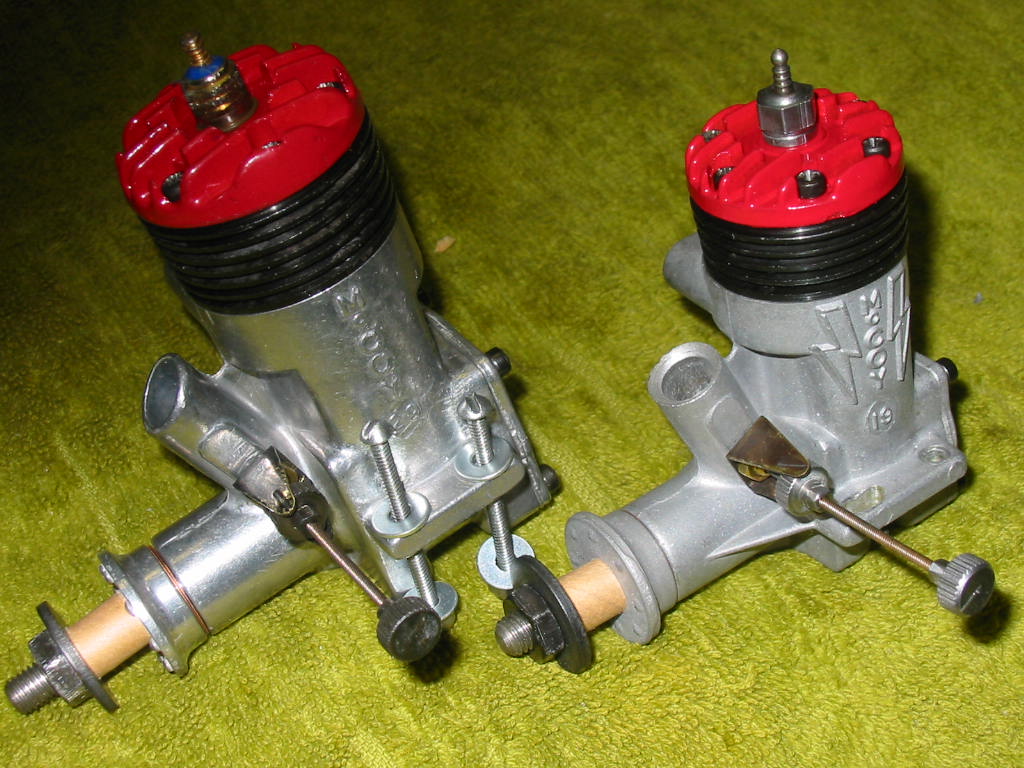 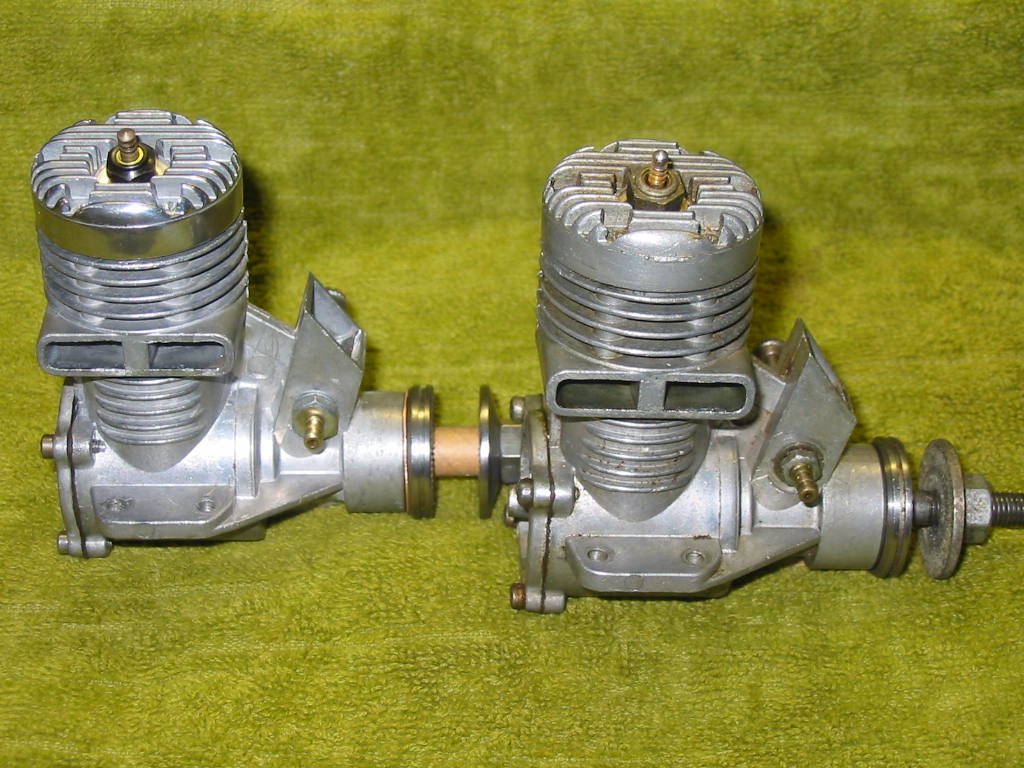 Thank you for sharing your knowledge on theses types of engines and what to look for.

My 2 cents worth on the Torpedo Green Heads are as follows. I have 3 Torpedo Green Head .35's that I fly today. 1st one I bought from Americas Hobby Center in 1968, 2nd in 1972 and the last many years ago at a swap meet. The 1968 engine is mounted on a Sig Banshee today, the 1972 is on a Sterling Yak 9, and the swap meet engine is mounted on a, M.I.C., Guillotine combat wing from the 70's. All three Torpedo engines have never been a problem to me. I run either 5% or 10 % nitro along with 28% oil mix of 50% Klotz and 50% Castor. 52 years of flying the 1968 engine and the head is still green, same is said for the 1972 engine. The swap meet engine I run 20% nitro and 25% oil when I fly the Guillotine just for show. In 1975 the series 75 engine took the place of the older Torpedo engines as a completely new engine. The Torpedo Green Heads are a more powerful engine of their time with a compression of around 7.0 where the Fox Stunt was at 6.0 compression. The Green Heads don't do well with a muffler and as someone said, on a profile plane one has to deal with the noise, and the helper that launches for me will be on the inside of the plane because of the exhaust. I can speak highly of these engines, and all three engines will start by hand, once the technique is learned. I have Fox engines as well that I fly with, but the K&B Green Heads are still my favorite today. Eddy

Eddy thank you for your experience with these engines, great to know they can last a long time.
jim

Jim, I'm assuming your looking for a engine to use for stunt or sport flying. If I can make a suggestion. It's nice to look back on the past, it's another to re live it. Old engines can and if not now will be problematic. Parts support for everything is scarce however, the old stuff is at it's end. Of the engines depicted in this post, I honestly wouldn't recommend any of them . The Mccoy has many many issues and while I own some that are good and everyone will tell you how great they are, the bad outweigh the good by a long shot. If you pick one up inexpensively, terrific. They can be fun assuming it's in good shape. A more modern engine like a OS FP .25 or a LA .25 will run circles around the Greenhead, Fox .35, Mccoy and the basic .35 sport engines of yesteryear.

While OS discontinued these engines, there still can be parts to be found. Many of the older engines vibrate causing further problems. The modern stuff can be run on fuels with less oil meaning less mess and can be muffled without destroying itself.

A LA .25 for instance is quite universal, we use them for stunt, racing and combat. I use both FP and LA engines and out of all of them I had one rod break in 25 years.

If larger is desired, while not many are in favor of it, the LA .40 works exceptionally well. They can be purchased very inexpensively. I prefer the LA .46 over the .40 and they share the same case size.

Older engine desire wider paddle bladed props. Again, if you don't own these, newer thinner blade designs are not real effective as these engines don't want to run high rpm's. LA engines want to run higher rpm's most of the time your running less pitch . Newer engines are heavier but they tend to run smoother.

Yes ken I am looking for another .25/.35 size engine for my next plane. And yes it will be for a stunt or a combat type, i do have super Satan kit on hand. I like to fly my planes a little faster than the standard stunt flyer. I do have a OS FP .25 mounted on a scratch built ring, but haven't really had a chance to really fly it enough to get things worked out.  First time out with it, it had Redhead .35 McCoy and really didn't fly fast enough for my liking, it crashed, up lead out wire snapped at the bell crank, i then repaired it  and installed the OS FP .25 and haven't been back out with it since. A lot going on even a move to another state. Winter coming on here in Idaho, so probably will do some building.    The OS .25 should be plenty for the ring, right?  I will just keep my eye's open for another OS or LA.
thanks ken.

The Super Satan is a fairly small wing. For speed limit combat, were flying 460 Sq in planes with the LA .25 so I see no issue whatsoever. Speaking of Super Satan's, I was with the designer Larry Scarinzi two weekends ago. Larry is now 86 and sadly is not flying. We had vintage combat in New Jersey Pinelands and many of Larry's designs were there. We had a fairly good turnout. Larry brought out the original Super Satan and it looks just as good now as it did when it was built.Larry used a small bowling pin cut in half as a pacifier compartment. Personally, I would just add a bladder compartment be it a tube or a balsa cylindrical compartment. We run LA's on bladder pressure exclusively and they're a real joy. The remote needle that comes with the LA works but it doesn't have much taper therefore it doesn't lean up as much as using other needle valve assemblies.

Seeing that you like faster, if you can locate a Magnum XL .25 or even a XLS .25, your going to have plenty of power. Those are both ball bearing variants and while heavier, they're power makes up for it.

Well the other way to go is the Enya engines.
Bob Brooks sells good engines, even maybe the magnums that you are looking for?

Bob Brooks has parts for Enya engines so you don't have to worry about getting parts for your Enya C/L engine.

Contact him directly and get 10% off your purchase. The 10% is what Ebay charges him.
Bob's email: shtterman@aol.com

First I have to say, I am grateful for all the info you guys are putting forth, I love it and appreciate it, but I hope you can understand that prices like that won't work for me. I am low budget guy and have to look for deals on these things. I build and fly for just fun, i don't need to be the fastest just a good flyer that is fast enough and have some fun. thanks guy's.