Got me a SkyRay !

Got me a SkyRay !

Stuck indoors, sequestered from the Covid as much as possible. Searching the interwebs for Cox and hobby stuff, seems to be a fulltime occupier of time. I found a posting for a “Toy Airplane” 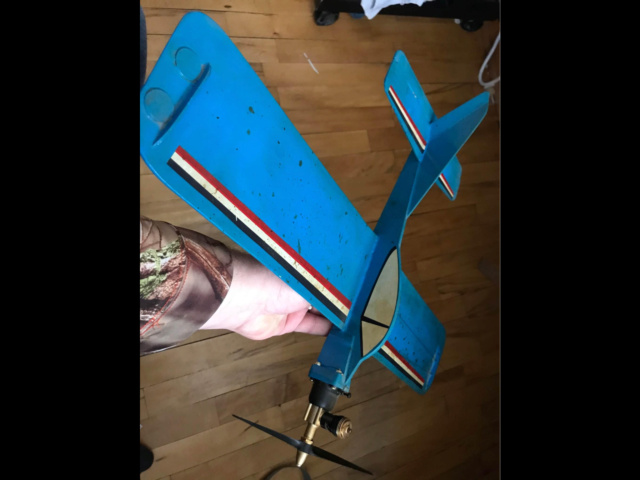 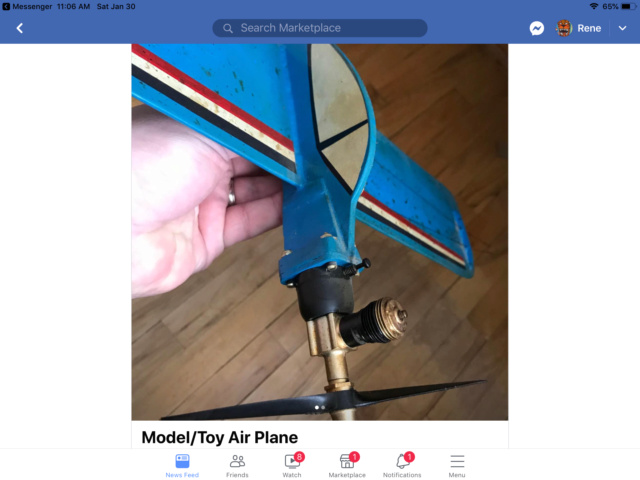 Needed a minor scrubbing with Dawn Power Wash to remove all the brown Tobacco staining, yellow turned to white: 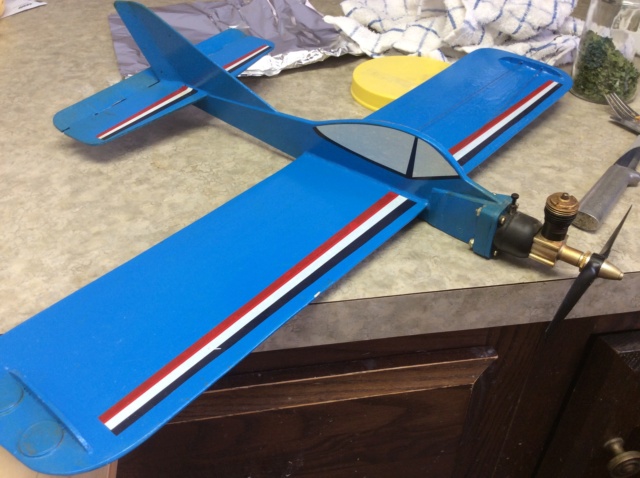 What a beauty. She looks well built and nicely painted.
Good find.
Bob

Both a nice looking plane and a great find!

If those outer wing counterweights are quarters US or Canadian you saved that amount off your purchase price.

How does the plane balance?  The nose looks really long.

I have the kit I must get around to building. They're supposed to be a really good flyer.

Bob, unfortunately those are Lincoln head pennies only 2 cents worth, but it still was a super good deal.

Rod, I don’t think the plane has ever flown as it has no fuel stains or epoxy repairs. It balances someplace ahead of the leading edge and is VERY nose heavy! I’ve read it should balance .50 to .75 inches behind the LE. I’ll probably change out the Estes Black Widow for a 290 Product Engine with the tank behind the firewall. Spring will be here before I know it!

I've never seen a Skyray nose heavy. They typically build tail heavy. They're very unstable built box stock due to being so and the plane hunts up and down. By the time you break the nose off of the plane which usually happens immediately, it's about 4-5 times of breaking it off and repairing it is about the time it settles in to be controllable. The nose always breaks off in front of the wing offering very little glue area to repair it. If the pushrod is in the outer most hole from bellcrank pivot point, take it out and install it in the hole closest to the center. The control horn is also a very bad design. For starters, it's too small contributing to the twitchiness, it's also held by one screw. So two things happen, it either gets loose and turns which immediately jams the controls or it pulls right through the elevator. A Dubro 1/2A horn makes it more adjustable and flyable due to it being longer and reducing elevator throw.

Glad you found something you like Rene. You did a good job cleaning it up. The Skyray never appealed to me, the aesthetics just seem off and the slab wing doesn’t help. Although I don’t care for it’s big brother either

A lot of guys on here really like them so I assume I am the one lacking in vision. I really hope it does what you want it to do!

looks nice. My Skyrays fly super nice. Very responsive and a joy to fly. Good for you!
Ice

Cribbs74 wrote:Although I don’t care for it’s big brother either

A lot of guys on here really like them so I assume I am the one lacking in vision. I really hope it does what you want it to do!

Ron, you are not alone. The appearance of the Sky Ray never appealed to me either, why I never bought any. However, I think our opinions would change if we took the handle to it and flew it.

I never thought much of the half-A R/C Sterling Minnie Mambo, only bought it because it was nearly dirt cheap when America's Hobby Center was still prolific in the 1970's. However, once I flew one, I was totally sold, a very decent well stuntable single channel R/C plane.

Some unloved planes become loved once flown and their capabilities shine.

For me, I fall in love with the lines and if it flys well then that’s a plus, if it doesn’t that’s fine too. Nothing about the Sky Ray suggests it will fly any better than a Sterling Beginner Ringmaster. Good for a 1/2A beginner I am sure. The .35 sized one flys quite well. Seen it in action, still wouldn’t buy it. OTOH I despise the Sig Twister and it too is a fab flyer. I was gifted a Twister several years back and just looked at the box for over a year in disgust. The guy who gave it to me kept asking when I was going to build it, finally I said it’s not high on my priority as I am just not in love with it. He laughed and said “I never told you to build it stock!” I started on the build the following week...

Anyway, beauty is in the eye of the beholder as they say and Rene likes it and I like Rene so that’s good enough for me.