Log in
Search
Latest topics
» NZ here we come.
by Oldenginerod Today at 5:04 am

» Castor proofing external servos
by balogh Today at 4:13 am

» Couple Kittens followed me home..
by Michpatriot Yesterday at 11:56 pm

» Half A Scorpion More than a Trainer
by rsv1cox Yesterday at 10:34 pm

» Got the modeling bug this past weekend
by roddie Yesterday at 9:57 pm

» My Mazda RX-7GSL-SE build log with the occasional balsa inclusion
by rsv1cox Yesterday at 9:20 pm

» How's the weather?
by GallopingGhostler Yesterday at 8:38 pm

A Photo Album of
"Allen and Kim's Excellent Adventure"

So, you're awakened by lightning and thunder on a day when your friend and fellow Circle Turner is gonna be twirling 60 foot lines around in the sky...what could go wrong with that?

Allen Bagg switched from steel to Spectra flying lines a long time ago, but if God can hurl a blinding stream of electrons with gaazzilions of volts and amps through miles of thin air, it's still something to consider.

We decided to roll the dice on this trip to Buder Park in St. Louis, even with the predicted storms and accompanying 26 mph winds, figuring that a washout could still be salvaged with a side-run to Schaefer's Hobbies just a mile off 270.

Cruising up I-55 through showers mixed with blue-sky-teasers, it was still a fun trip, talking model airplane nerd stuff, and whatever else came up.

We got to Buder Park in a light mist, with Dan out in the circle, putting in a practice flight.   Also, the predicted winds, thankfully, never arrived.  Allen got his gear down the line and I grabbed my cameras, just in case the weather would let the contestants get some flights in.

The weather, amazingly, held through the day with just a few moments of light drizzle, until the event was abruptly ended by a clap of thunder later in the afternoon.

Allen got his flights in, and won 1st place in Intermediate, with some good practice for the coming season.  He was somewhat tempering his victory by the fact that he was the only entrant in Intermediate, but I pointed out that it was a great chance to polish his patterns, and also gave the Lafayette Esquadrille an entry in the category.

So, the full day of flying was wrapped up with the previously mentioned stop at Schaefer's Hobby Shop, and with Allen dropped off in Cape Girardeau to continue his journey home.

Sometimes, it DOES pay to roll the dice. 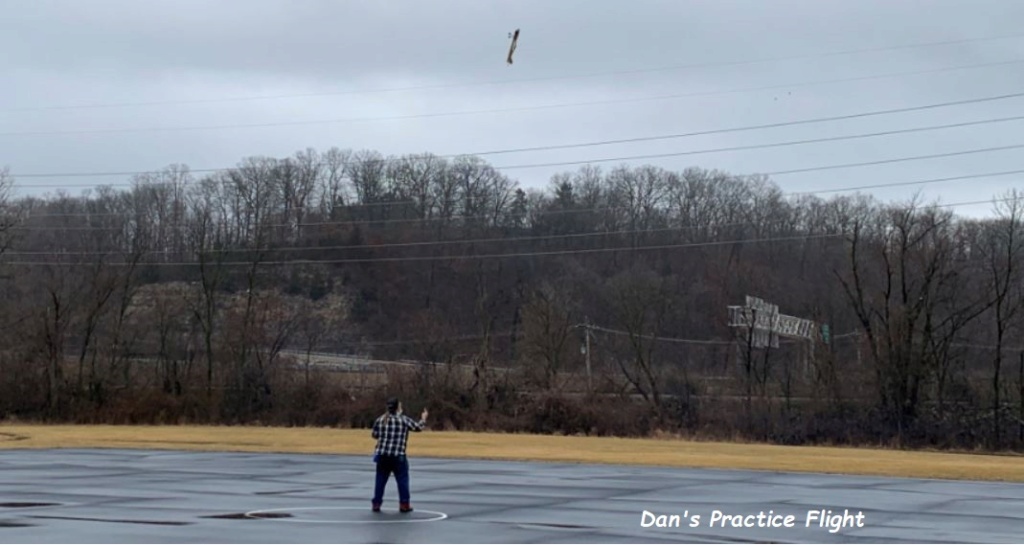 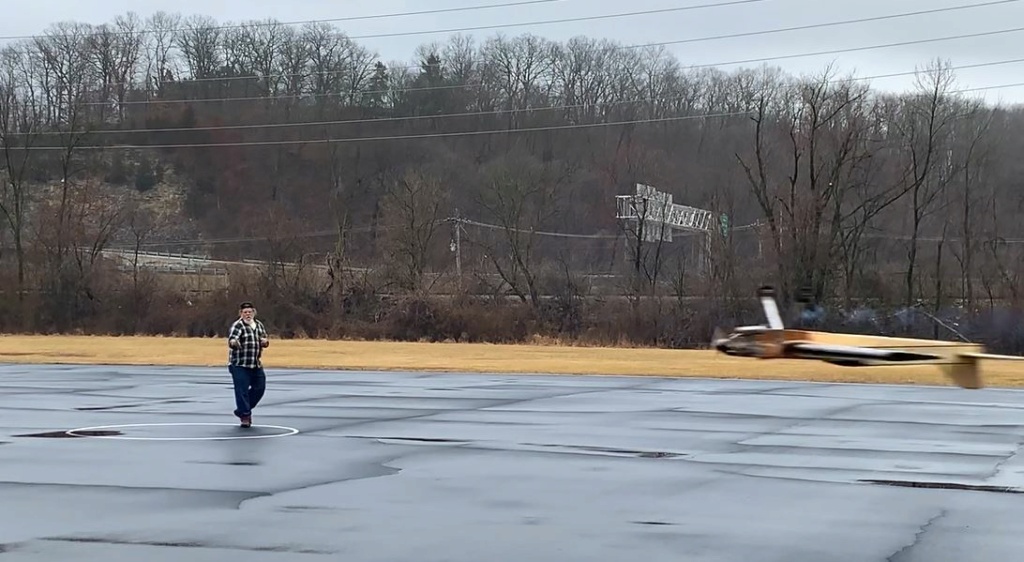 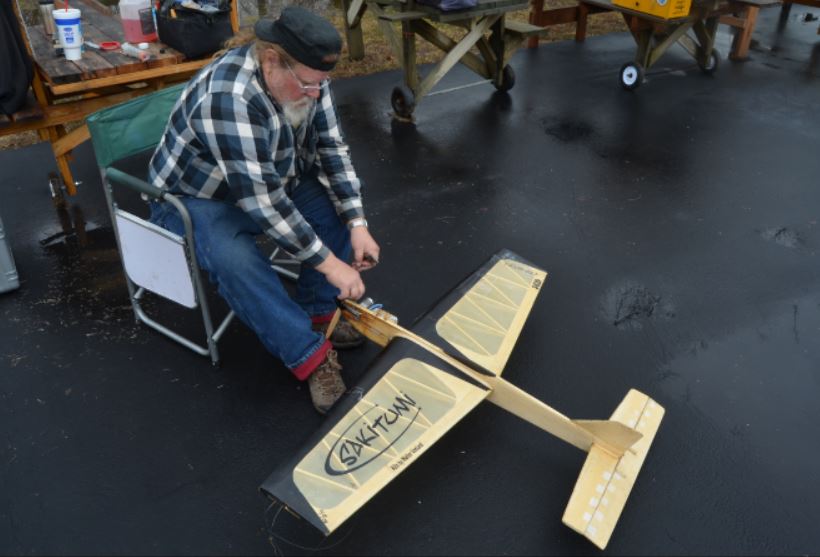 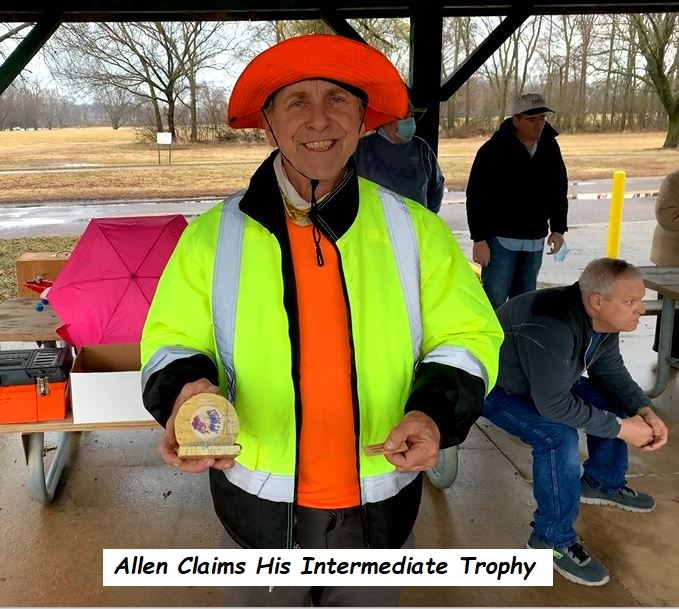 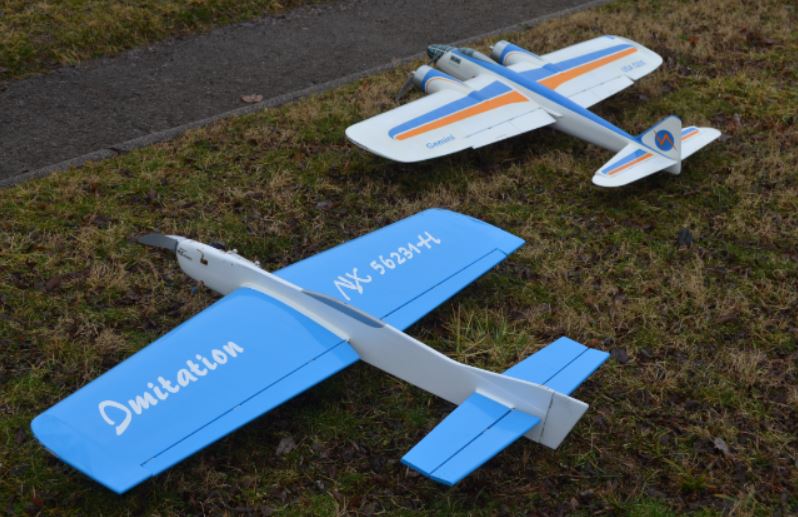 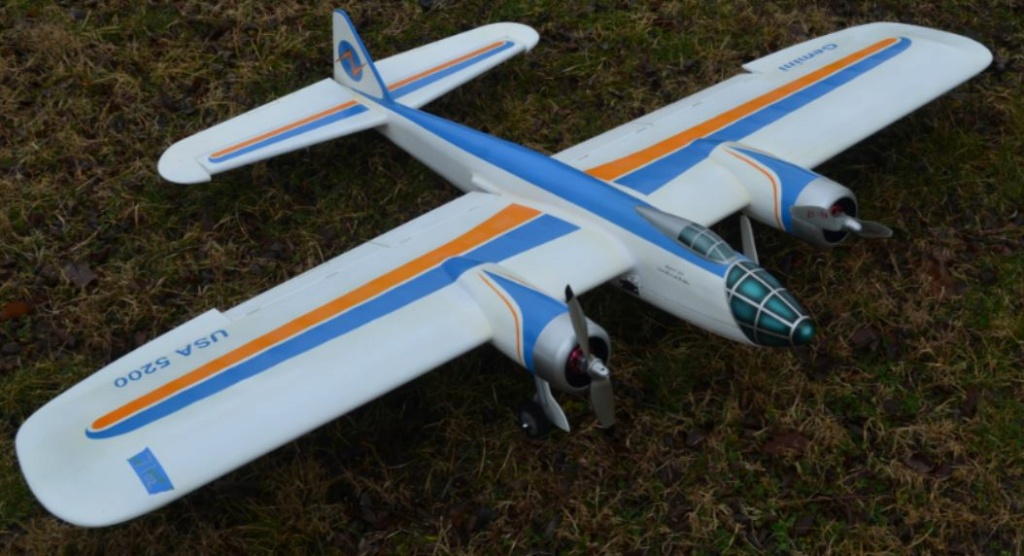 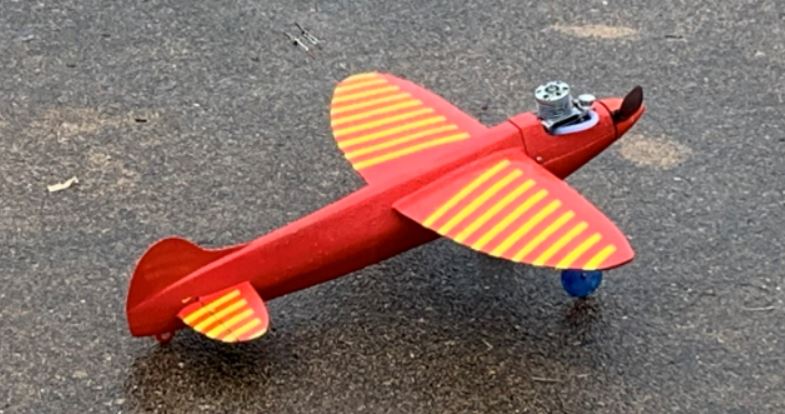 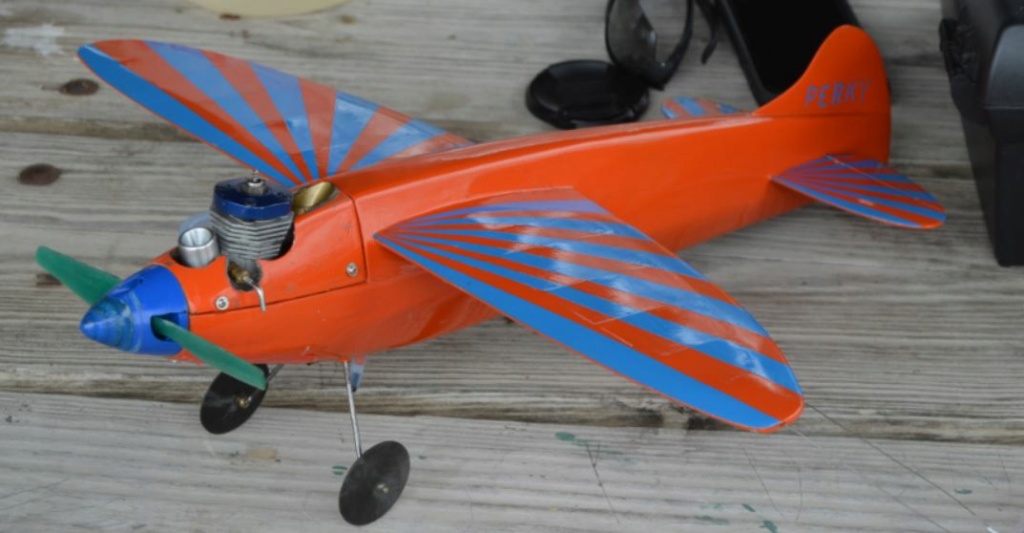 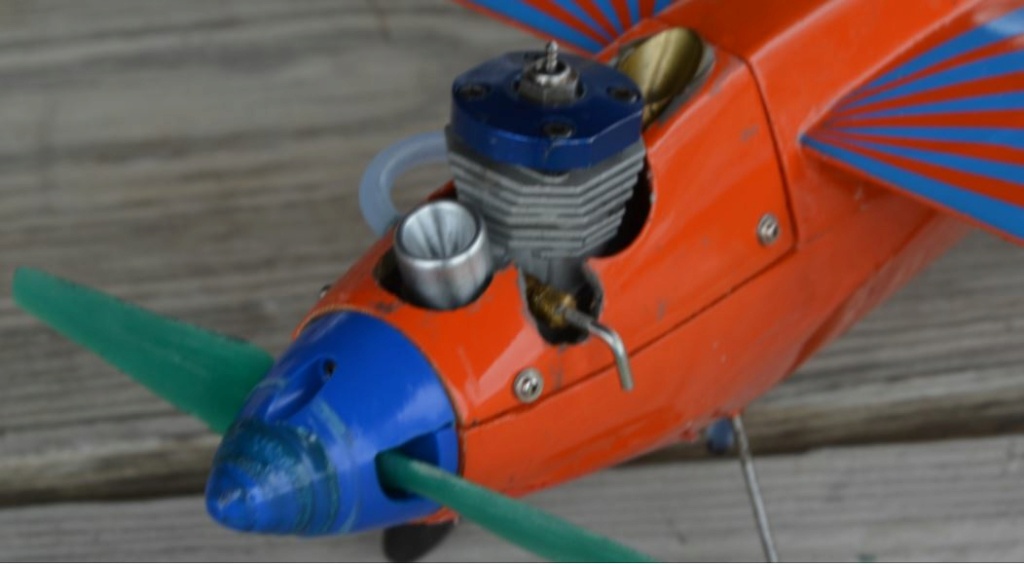 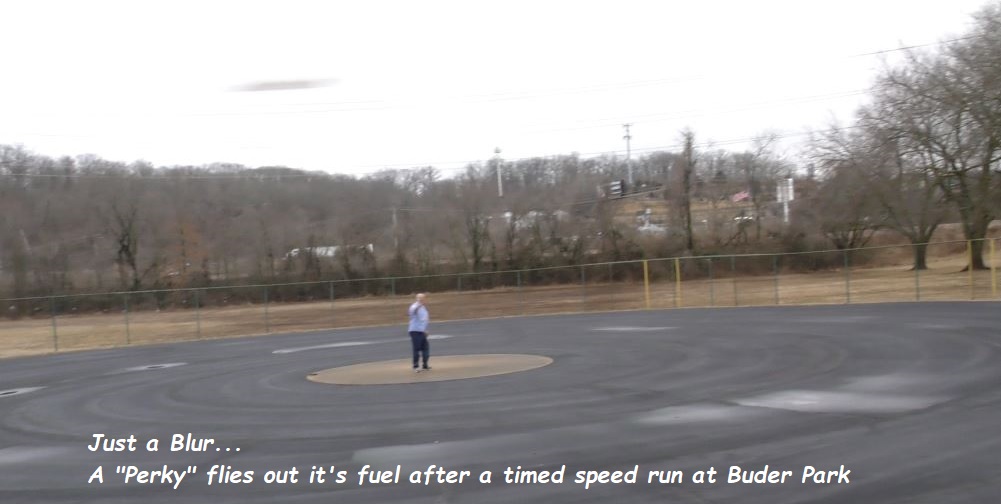 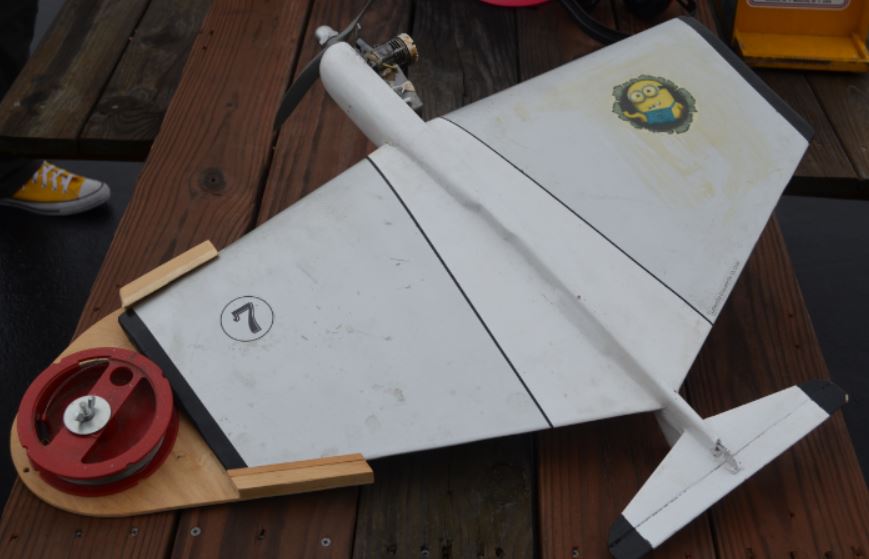 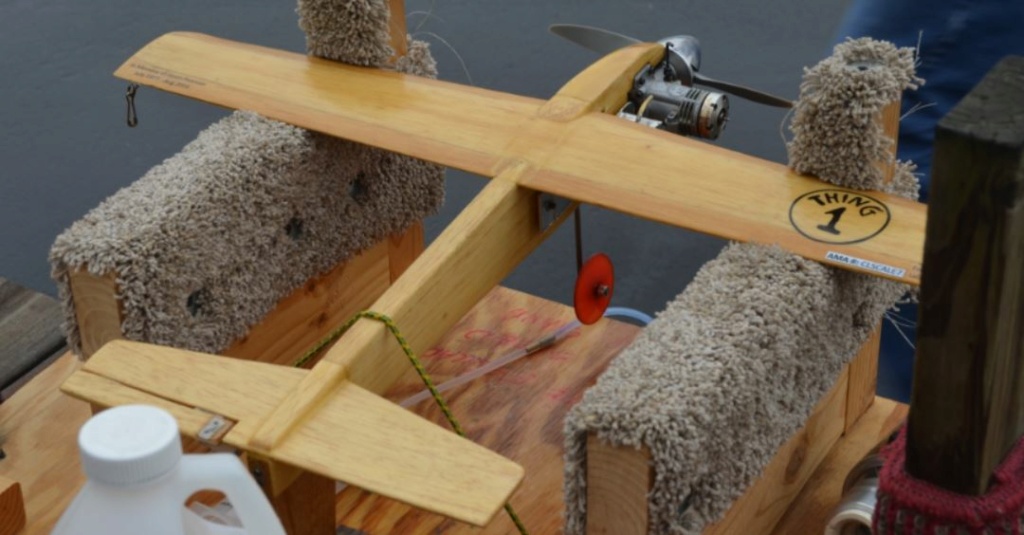 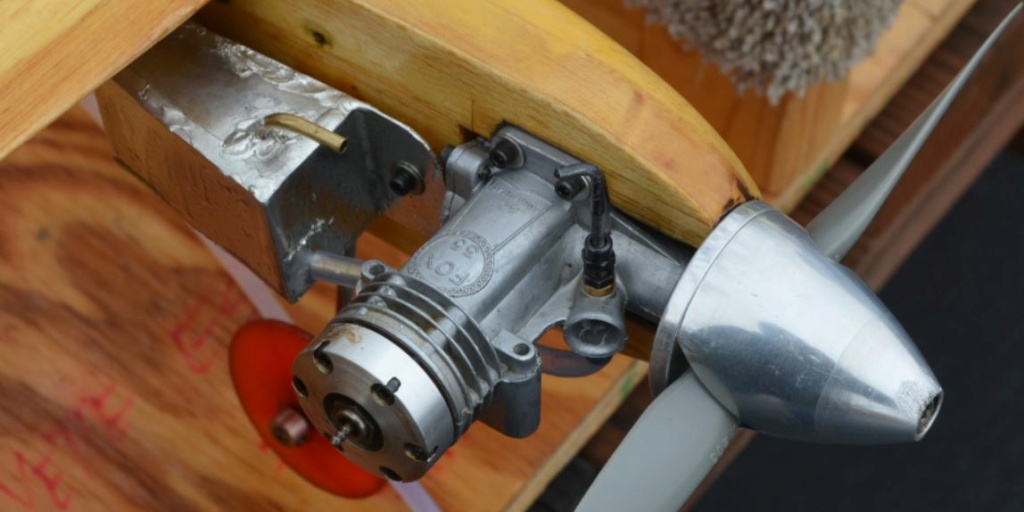 a very good friend of mine has a sakitumi as well, according to him, it flies just as good as it looks!

Thank you Kim for driving up and getting all the great pictures. I think everyone had a lot of fun. I think if more people knew how much fun these contests really are that they would come out. Even if you don't fly it's fantasy come true to witness all these old timers dig out the kid in them. And some of those guys are impressive good. A sight to see, walking, talking, flying keepers of control line knowledge, skill, and history. Everyone that has ever been interested in control line or any flying models should come out and witness these old guys before they are all gone. Control Line Forever!

Thanks for that, Kim. Good read and photos.
Sounds like a swell bunch of guys, and I bet
you fit right in(except maybe age wise).
Cool stuff.
Bob

Thanks Allen and Bob!

Yes...it was a hoot!  Heading to Cape though, I was pretty much counting it as just a shopping trip to Schaefers.

Dan had officially made us responsible for "keeping away the wind and rain" and we were happy to do it free-of-charge!  Most know that I'm "all about the flash-back", and the racket and aroma of these caster slingers (the planes not their pilots) takes me right there.

So, the Season starts.

Awesome, looks like great fun. Very cool speed planes too. Thanks for sharing I enjoyed thr read. We were trying to put an event together a couple years ago but the wind is so unpredictable we sort of never committed to it. We are near the mountains and get this crazy Chinook effect, not a good situation for stunt pilots traveling to fly here. Basical I look out the window in the morning, branches bending, nope take the 35 size leaves fluttering slightly take the 1/2a lol.

We do have a stunt contest by Edmonton Alberta, "Prairie Fire." I hope to see it in in person soon. Guess I gotta learn some kinda pattern lol.

We do have a stunt contest by Edmonton Alberta, "Prairie Fire." I hope to see it in in person soon.  Guess I gotta learn some kinda pattern lol.

Yes! I'm with you on that! These guys make me want to...my biggest problem is my near-total lack of discipline and willingness to practice, and properly trim my planes.

I'll flirt with the stuff, then break loose like a dog that chases cars. Still manage some fun though, so there's that.

Nice looking Planes , looks like another good time !! And a after party too