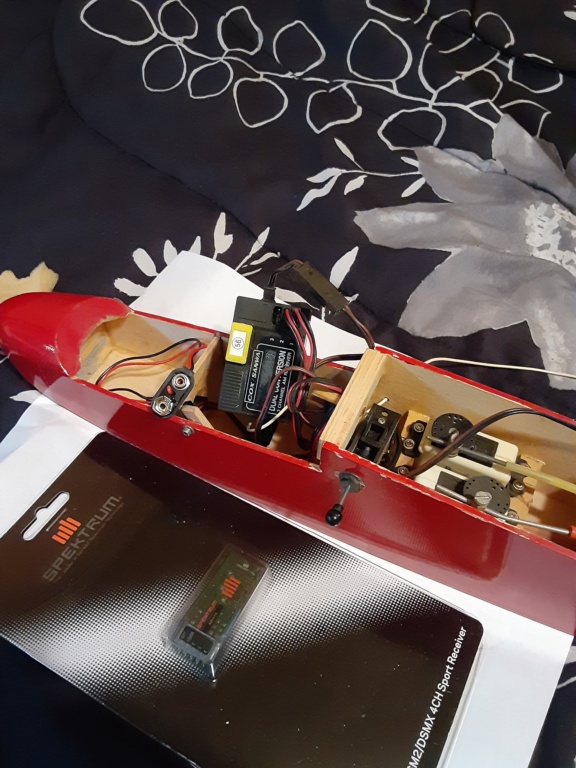 I got this two by two glider animal make a power glider and the radio in it is an old Cox and it seems to be wired for 9 volt I think somebody is wired it in but my question is will it run off of 9 volts horse I don't have the receiver for it I'm going to change it out to something else.

Eric, by no means am I a r/c flyer. I could be completely wrong here . I know little to nothing about r/c.. However, I do know based on my r/c car exeperiences that putting a 9 volt battery to that receiver is probably not recommended. I thought a receiver was around 4.8 volts or something close to that. It seems to me that the designated battery wasn't available to the prior owner and they made a pack utilizing 9 volt connectors. Seeing that you do r/c, do you have a receiver pack you could wire to that radio? Ken

Yeah 4.8-6.0 V is what i know of just wondering if this cox sanwa is different / I don't have anything at the moment to ck if the receiver works . But i am going to change all that out already out now , I got to go upstairs and get the larger servos for it i am going to bee taking alot of weight out of it anyway but will keep the servos the same size . Looks like i am going to bee learnign about the AR410 Rec. and the spektrum 6I at the same time and i know nothing so far about setting them up LOL

[quote="gkamysz"]4 cell dry cell holders exist with the "9V" connection.[/quot  I know that but i guess the PO made his own back then ? Just could not imagine it would work on 9V.

That receiver runs off of 4.8 to 6.0 volts.
My Cox/Sanwa Cobra radio has the same receiver in my R/C Commander. 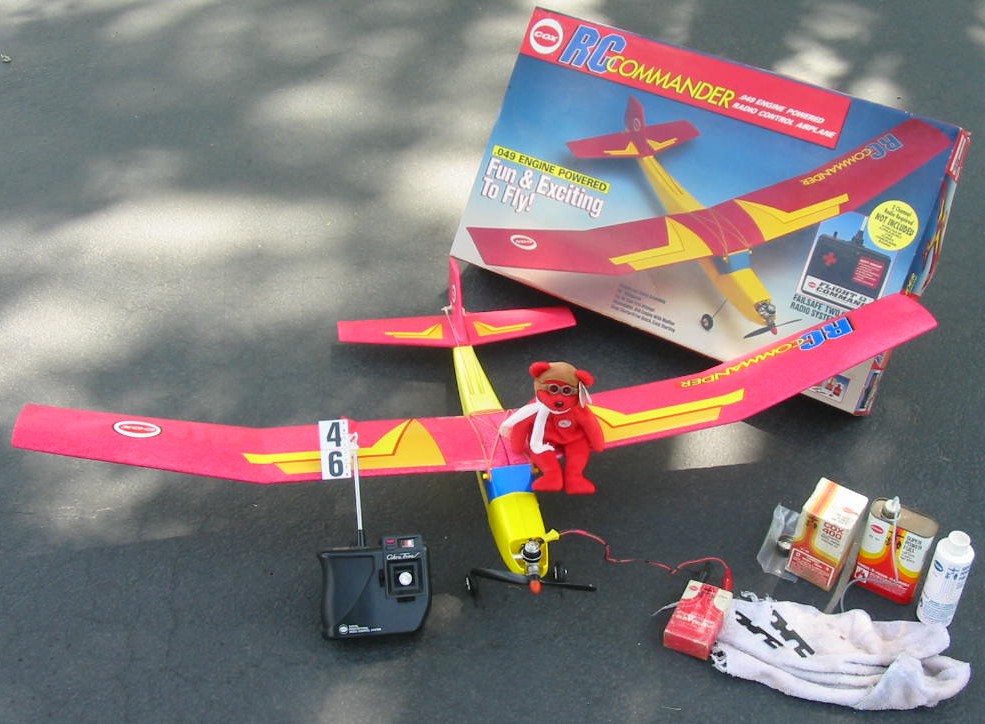 Cox/Sanwa used (back then) the dry cell (alkaline battery) battery holder. Which had the 9 volt type connectors.
Those cells would run for 12 hours straight before you would have to change them.
The Tx on the Cobra radio also has a 9 volt type of connector.

Just use a standard R/C switch harness that would plug into the Rx. and hook up to a 4.8 volt (4 cell) Rx battery.
One more thing.
Watch out for the polarity!
The polarity on the old Cox/Sanwa/Airtronics was backwards.
The Positive (Red) is on the outside and the Negative (black) is in the center.
All of the radios nowadays have the Negative on the outside and the Positive in the center pin.

I fried too many Airtronics servos and Rx over the years because of that wiring setup.
Until Airtronics changed it over years later to the other wiring setup like the others (Futaba, Multiplex, Hitec, etc.)

Thank You that is what i was looking for

@getback wrote:Thank You that is what i was looking for

Read my posting about the wiring polarity to make sure you don't fry the Rx.
Here is a photo of Airtronics remedy to correct some of their older equipment to the newer (rewired) equipment.
You could buy an adapter that can correct the polarity difference.
Take a close look on the adapter on how the wires are switched (Red and Black) on the end where the Rx plugs in so to make it acceptable for the now standardized wiring.

IF you decide to use those Cox/Sanwa servos to hook up to your Spektrum Rx also watch out for the correct polarity there or you'll have two smoking servos! 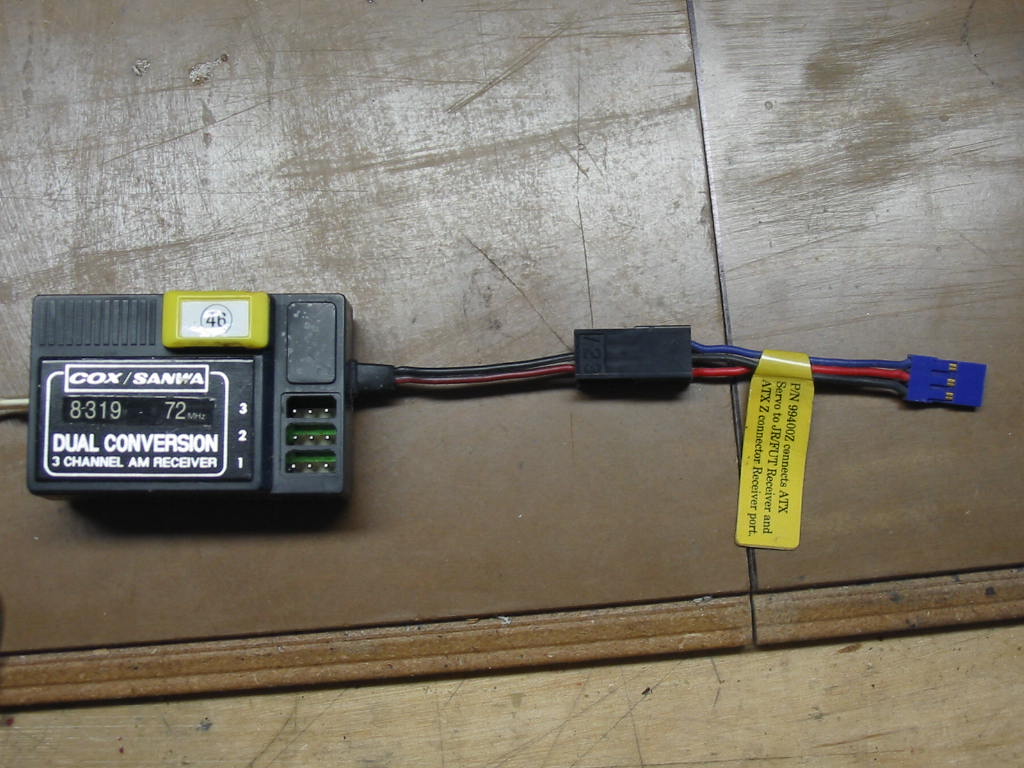 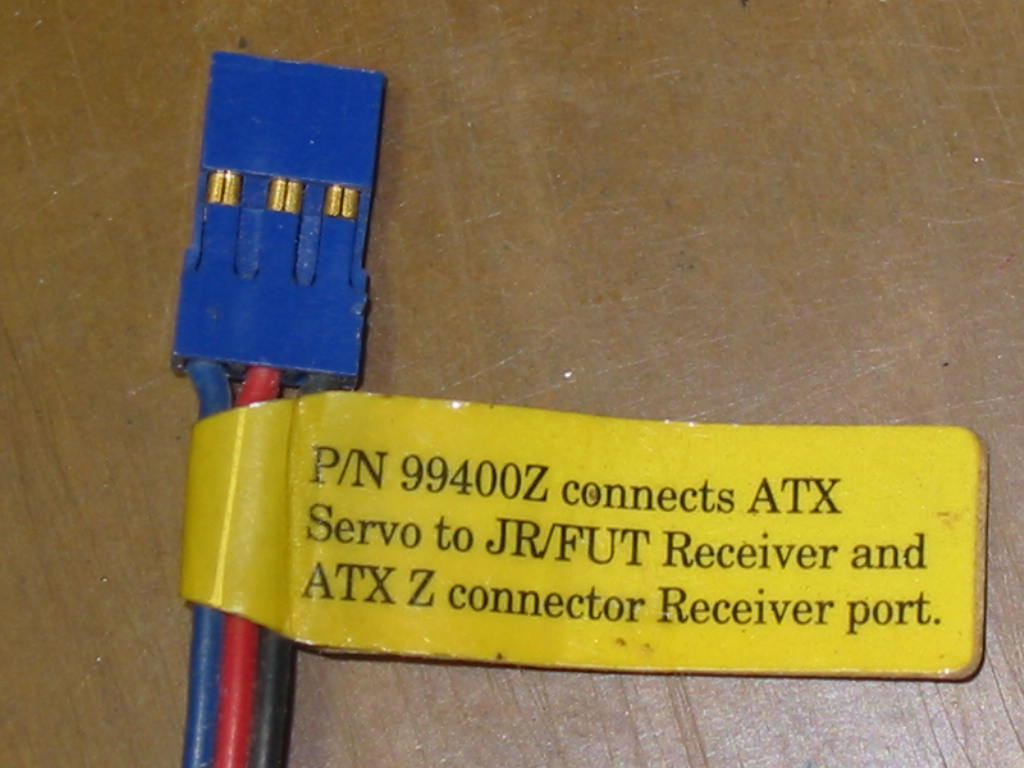 Or you can read this website and change over one of the switches you have to comply with the polarity (wiring) difference.
https://incedo.org/~sjoholmp/helis/servos/servos.html

Just remember, Cox/Sanwa/Airtronics were all the same, at one time.

Any problems with the receiver or 6i, give me a shout as I have experience with them. Not the 410, but others in that particular variation. Easy to set up in a 6i. Just to give you a little heads up, Spektrum is wired in AETR (ch#1 ailerons, ch#2elevator, ch#3 throttle, ch#4 rudder).

Thanks sosam117 I have removed the hole shebang and will replace with more up to date as soon as i can find my larger servos ? Without having to take them out of something else !! I have a few! of the old male plugin servos and receivers in and out of planes (upstairs) You can tell i have been out of RC awhile , but it is still good to know about the transfer... Thanks Chancey i will bee hitting you up for some info if i can't get it

I have a large RC sail plane that someone gave me which has a Sanwa system installed. Probably only 2-3 channel. I haven't had a close look, thinking it was probably a fairly second-rate type radio, but from the sounds of it they were a pretty useable rig.

I believe Sanwa was an Airtronics off brand. If so, I do know their systems were pretty good.

Just a history on Sanwa.

@NEW222 wrote:Just a history on Sanwa.

I knew Lee Renaud personally.
I was a young kid back then (teen age years.)My dad (Jim McIntyre), Dan Pruss, Jack Hiner (which I still fly with) and other well known S.O.A.R. members.
Growing up in the 70's and 80's, I was able to meet and fly with what is considered our pioneers.
Sid Axelrod (Mr. Monokote), Walley Simmers (Mr. Midwest Models), The Good brothers, Joe Elgin, and many more.

I was able to build prototype planes that Lee designed before they went out into production.
I also have some planes that were never kitted. Like the Bueto (the photos below) 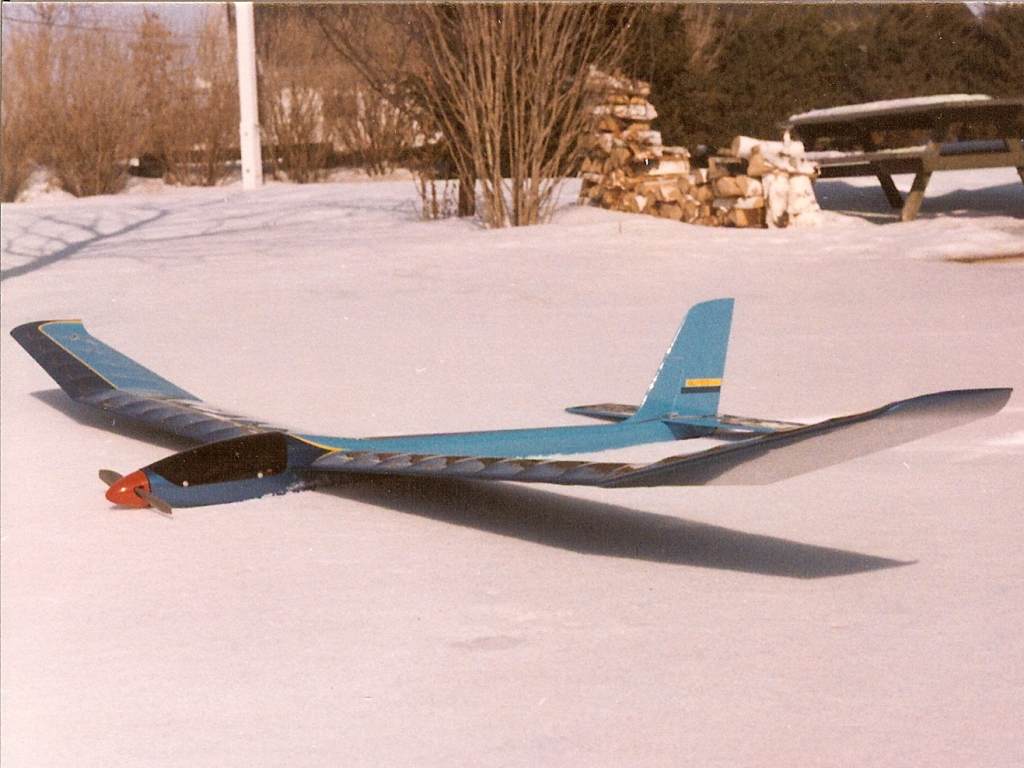 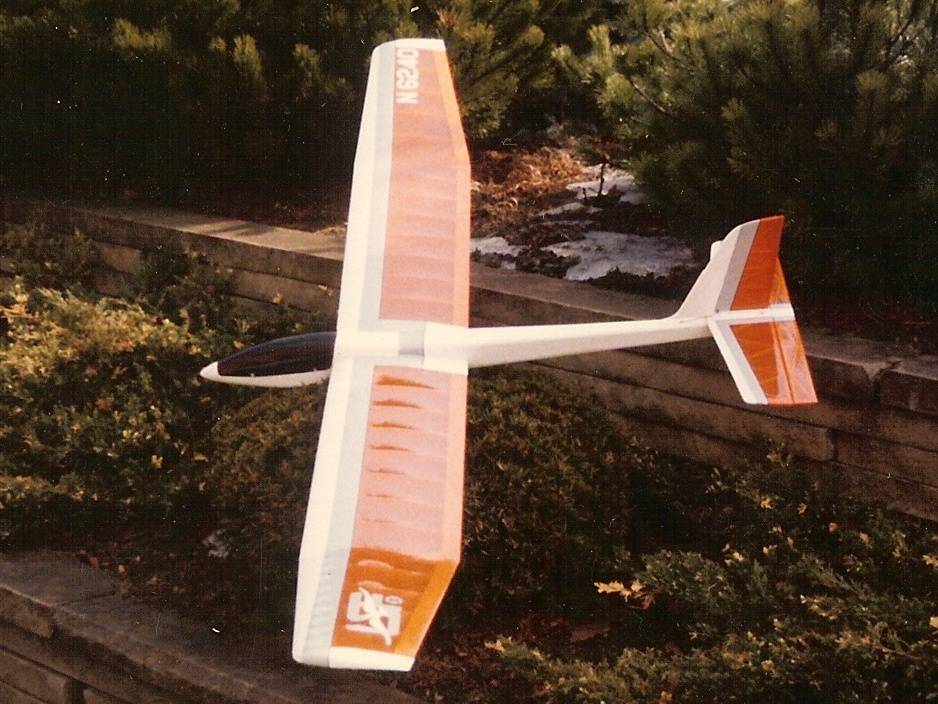 The Buteo was one of the last designs that Lee was working on before he pass on.
It used the wings and tail from the Oly 650 and a simplified fuse from the Aquila.
I don't have the plans (though I wish I did).
After making the prototype plane I mailed the planes back to Lee with notations on the changed needed and also what parts were made wrong.
When the kit would come out, I'd get the 1st one off the production run.
The one thing I proud of is the plane on the box of the Oly II. That is my pre-production plane I built and covered and sent the picture to Lee. Of course Lee had the rights to use the photo and that was what was used.
By the way I still have the plane, though the covering is old and brittle. (last plane - top left corner)
Photo of the Oly 99 (bottom left), 1st production kit Oly II (bottom right), and all white Oly II with Miller mod.
Google Skip Miller modification on an Aquila. 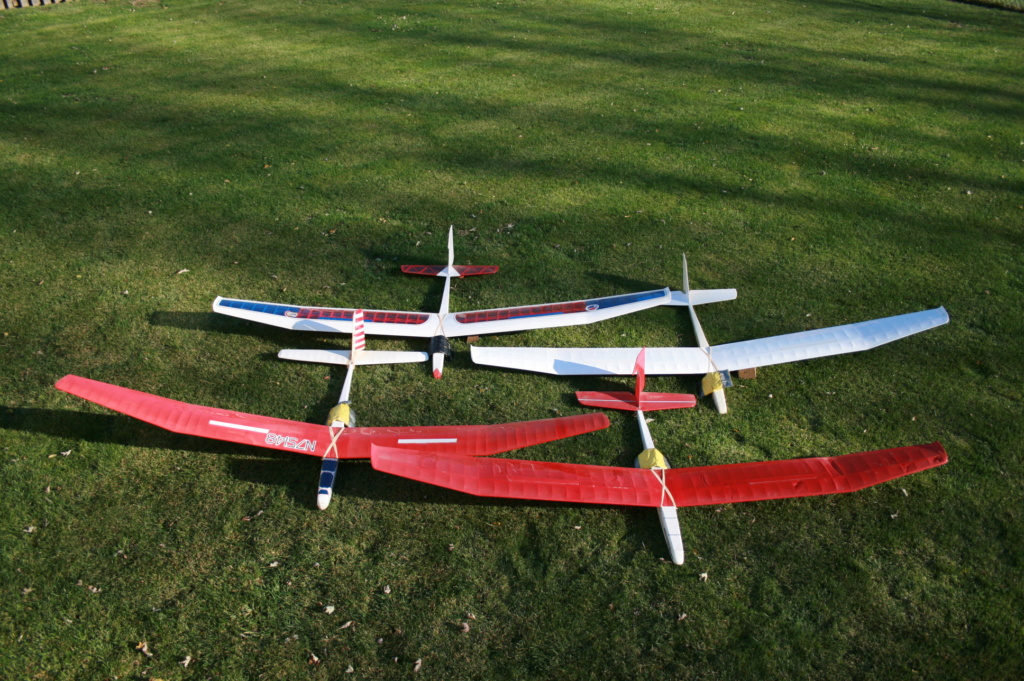 The orange and white Bueto is Gordon Pearson's (in Michigan).
The plane could be built as a glider or use the electric equipment from AstroFlight, which Lee and Boucher had an agreement with for planes designed for Astro motors. Such as the Astro Challenger.

Lee gave Pruss a deal on Airtronics radios and I got the 1st XL radio from Dan Pruss in the summer of 1980.
I still have that radio and all of the following radios from Airtronics, Including the Vision radios (with ATRAC).
The only one I never purchased was the Stylus. Too costly to purchase and by then Lee had passed away. And no more discounts.

I did upgrade to the 2.4 gig radios. The RDS-8000, the SD-6G, the SD-5G , and one Aquila-6.
You can still get the Rx and Tx from Serpent America and get good bargains on the R/C group classified in the R/C equipment.

Airtronics have been reliable to me for years. I have never had the radio fail, though I done my share of pilot errors.
The were/are still the best. (my opinion).

That's a Cool background sosam117 , sounds like you were in tight with some up and coming big names . I noticed that there are quite a few wins worldwide in competition .

I remember the Airtronics radios coming out and it seemed Kraft was there biggest competitor , I may have owned the Airtronics but never a Kraft , not much money flow for the hobby at the time

just some glue so far

Still haven't found my other servos ?!"! Looking forward to fling it , it has the hook for free flight rubber take off .

@getback wrote:That's a Cool background sosam117 , sounds like you were in tight with some up and coming big names . I noticed that there are quite a few wins worldwide in competition .

I remember the Airtronics radios coming out and it seemed Kraft was there biggest competitor , I may have owned the Airtronics but never a Kraft , not much money flow for the hobby at the time

just some glue so far

Still haven't found my other servos ?!"! Looking forward to fling it , it has the hook for free flight rubber take off . 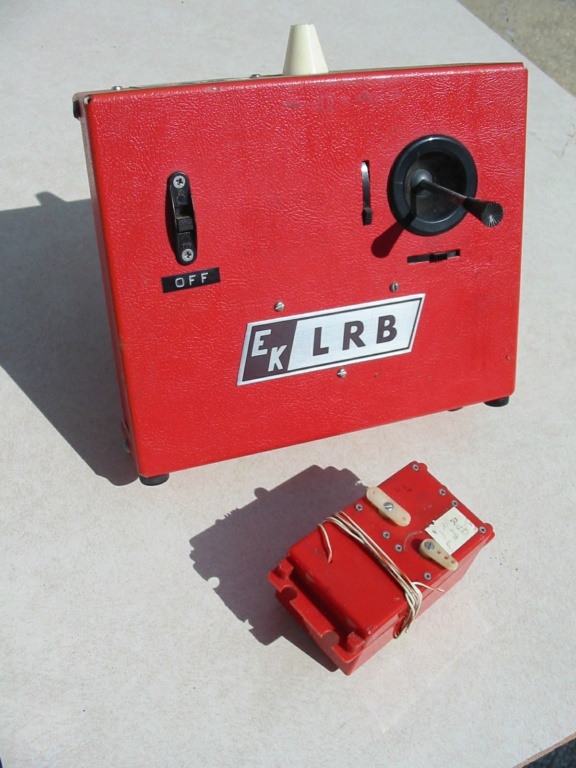 then I got an EK Ranger three channel on channel 72.320 (about 1976).
Have three other receivers for the ranger that are 3 channel Rx with separate plugins for servos.
Used the EK Ranger for years until 1980 when I got my 1st Airtronics radio. 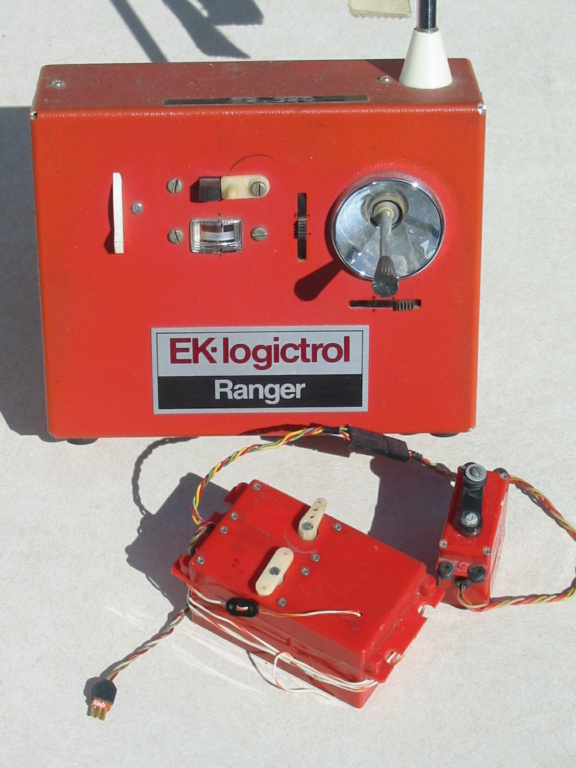 My dad had Kraft radio gear. I got the EK radios from Dan Pruss because he knew of the guys that were making them.
The EK radio makers broke away from Kraft because of a difference in ideas.

It was Dan Pruss that also started me on Airtronics (radios) after EK radio got bought up by Kraft (later on).
By the way, The EK radio still works, though it is probably not tuned in as it should be?