» Couple Kittens followed me home..
by HalfaDave Today at 3:16 pm

» Looking for tips
by HalfaDave Today at 2:44 pm

» Browsing around the Gilbert file
by rsv1cox Today at 1:42 pm

» My Mazda RX-7GSL-SE build log with the occasional balsa inclusion
by rsv1cox Today at 7:48 am

So, at risk of starting another build thread that just kinda tapers away, here's the fuselage of the Midwest Models ME-109 kit I got from Ron...with an Enya .15 I ALSO got from Ron!

As could be expected, it's close to the size of my beloved Shark 15, and I'm now ready to start work on its wing.  Our current drop in temps has really helped keep the shop comfortable without giving it's poor air conditioner a hernia so, the work has been fun.

When finished, it will fly on my newly discovered front yard flight circle that has the diameter to handle such aircraft.

So you got it, eh Kim? I got the Mustang from that set all spread out. Care to trade patterns? I'll trace mine and scan them to you, you do the same for me. I can get the build sheet for the ME from OZ.

944_Jim wrote:So you got it, eh Kim? I got the Mustang from that set all spread out. Care to trade patterns? I'll trace mine and scan them to you, you do the same for me. I can get the build sheet for the ME from OZ.

I can trace the parts for you as I as I assemble them.  The ribs shouldn't be too big of a deal, but the fuse parts are assembled, with blanks not being in good condition.  The die-cutting was pretty good with this kit.  I also copied the build sheet from OZ.

I appreciate the offer on the Mustang, but I'd probably never get around to building it...got a bunch of other projects screaming over my shoulder as I work on the this one.

Shoot me you mailing address and I'll get the sheet to you as soon as I get it finished.

Hey Jim,
I forgot to mention that I didn't get a plan sheet with the kit, and am going by the plan I got from OZ.

I checked the plan on OZ and the patterns are included on the plan, so you 'll probably be better off enlarging those to patterns.

Using the plansheet parts patterns sounds like a possible solution. Then I should scan and blow up the parts on the Mustang, and check them against the actual parts. If I pull that off, I'll scale up the ME parts from the OZ plan. I may hit you up for your tracings if I can't work the plans patterns.
Thanks...

944_Jim wrote:Using the plansheet parts patterns sounds like a possible solution. Then I should scan and blow up the parts on the Mustang, and check them against the actual parts. If I pull that off, I'll scale up the ME parts from the OZ plan. I may hit you up for your tracings if I can't work the plans patterns.
Thanks...

OK, but please let me know so I can hit these parts with some CA.

Please don't hold off building on my account. I have to get off my duff and clean the work room...too many "almost dones," and "sanded, ready to glue up" kits. I think I'll have a pretty dopey winter covering a pile of wings and fuselages. Next spring will be the season of many planes to fly.


All of the tracings I've done were on soft/kit wood as it came out of the stamped sheets. CA if it fits your build method, but not just for grabbing tracings.

If not too much of an inconvenience, I would like ribs/flaps and stab/elevator...a bonus would be any other part not shown (but would typically visible on top planform) since we don't have a topview to work from (bellcrank plywood, any corner gussets, wing tips). Really, just the ribs would clear up a good bit, and the rest can be assumed, or interpolated (extrapolated?) by a skilled builder (I'd like to think I'm pretty good).

An unintended consequence - in a good way!

Given that Kim's build thread is underway, I wanted to locate the plans for both the ME-109 and the P-51. What I found was a common manufacturer (Midwest) and designer: Vince Micchia. When I searched on Micchia, I found that Micchia had been a big player in the designs of a number of models from the mid-60's into the early 80's including several 1/2A production models: 1/2A SST, L-19 Bird Dog, Lil Tri Squire and Tri Squire, kit version of the Mach 1 (big brother of the Mach None) and the Super Sniffer. In all, there were 20 models listed under his name, 1/2A through .35 sized.

So, thank you, Kim. Were it not for your thread, I likely would have never made the connection between the different 1/2A models and Micchia

The roots of these various planes can spread pretty far.!

I've built many of the Midwest series warbirds over the years. I had fun with them. I built all but the Skyraider in the 48" series. I have a few kits left aside from the 48" Kingcobra. Larry Richards made reproduction kits of both the .15 & .35 series not too mention many of the Veco kits. Larry's work was the most amazing kits I've ever witnessed in a hand cut kit. He was a master. Larry also restores full scale warbirds as well so he's a very knowledgeable modeler. I never purchased his warbird Midwest series kits and regret it to this day. I've seen his 48" Kingcobra sell for close to $300. His wood selection and accuracy made the old Midwest tanks fly quite well.  Midwest isn't exactly known for lightness. The nice thing about them though was that as a kid, you needed the hard and heavy wood because any mishap resulted in splinters.

My dad built this .15 size ME-109 like Kim's in the early eighties. This was powered by a Cox Medallion .15. We purchased 4 Cox Medallions from Tower Hobbies in 1983 for $20 a piece. I have one new left and one decided it didn't like it's piston and spit it out.  I fly it once in a while. Not the last plane my dad built but close to it. He went back into r/c and the last of the last was a Banshee I bought for him as a father's day present. Even today 30+ years later, it still looks good. My dad was a neat builder and even this paint job looks great. He's a talented builder and I admire this scheme.

I will say that one thing that I felt that hindered performance on my 48" version was the rad scoops on the underside of the wing. I felt this caused a lot of drag causing the plane to act differently when looping. I don't recall this issue with the .15 but I removed them on the 48". I sold my 48" ME-109 at a Jersey swap meet a few years ago. Some say that you won't miss them ten minutes afterwards. I disagree, I liked the plane regardless of how it flew. I originally  found it in a trash can one day on my way to work. It was half started, many pieces missing but decals, canopy, flap horn wires, all in the box. Some one gave up and I rescued it only to fly it after being built 12 years later.

One thing that I tend to agree with that most state is the wings of these models. They're just too thin and they need to fly fast which doesn't equate well with stunt. To most, this is a non issue but I will say some of my most memorable moments of flying is a result of these planes. 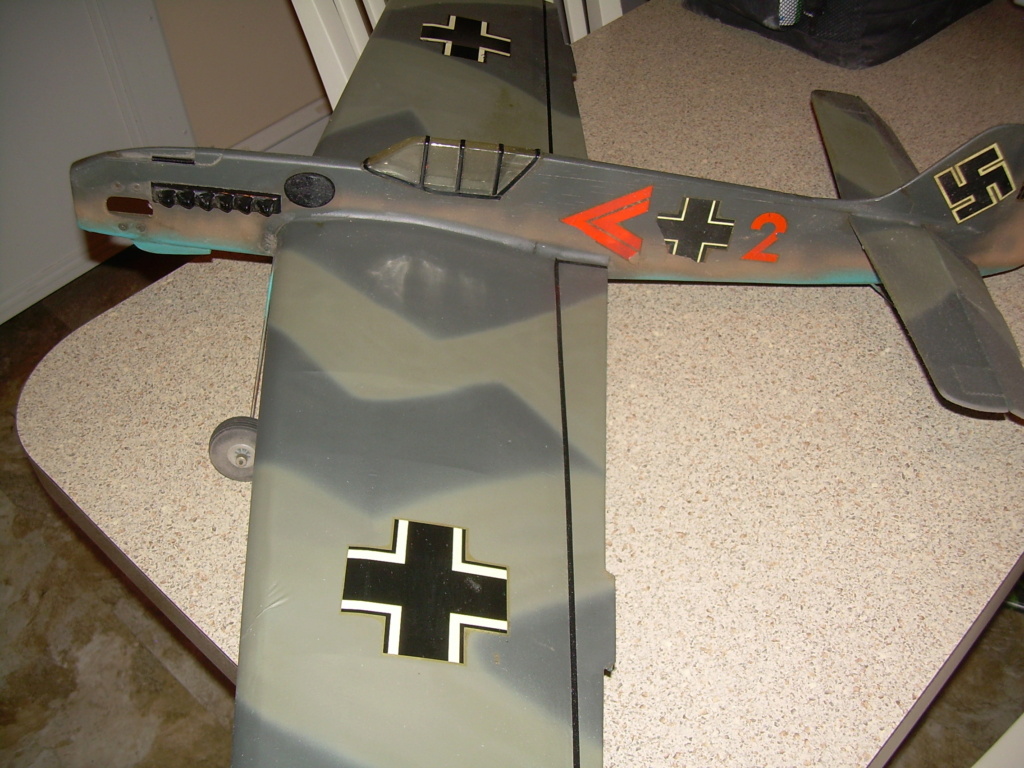 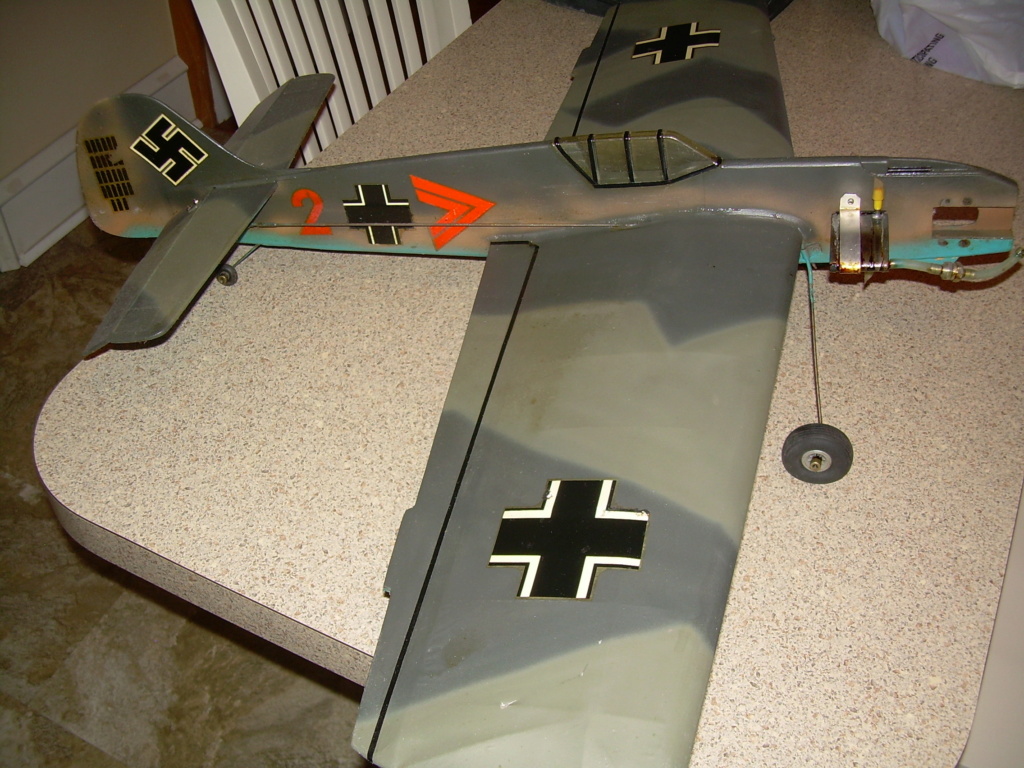 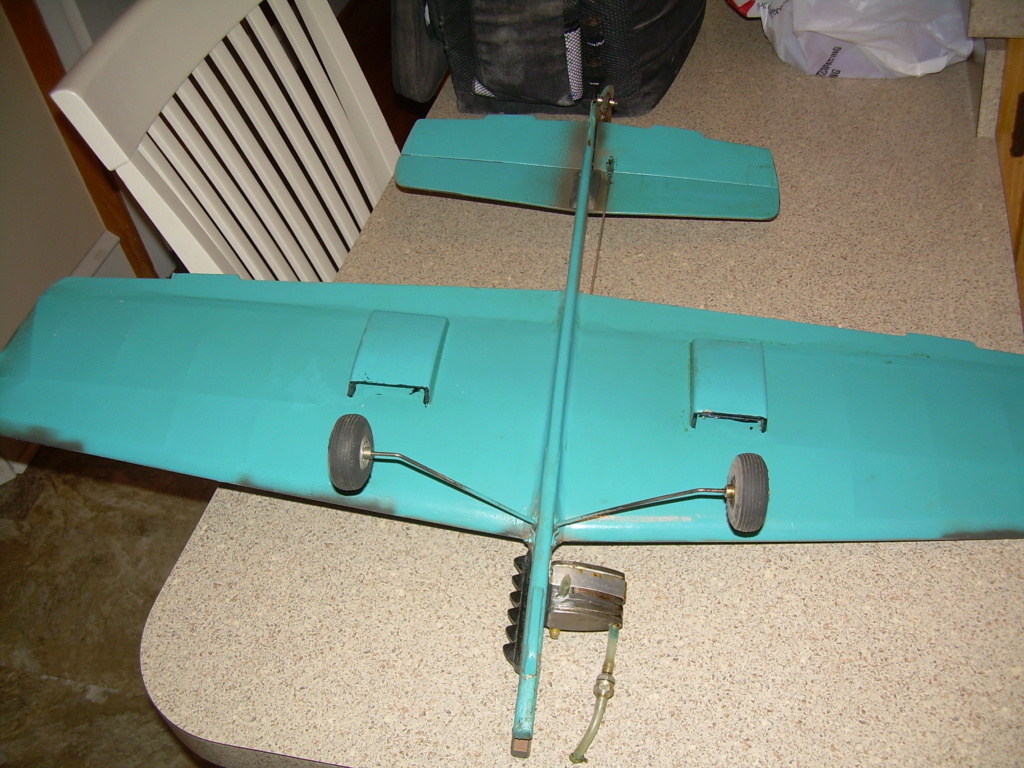 I'm waiting to flip it over one day and break the rudder off so I can get rid of that rudder offset. I have no touch up so I'll wait for it to break and repair it straight.


This was painted with flat Poly-U colors. Poly U wasn't well liked by myself but it worked so so. Thinner was a problem and the underside turned out more shiny due to incorrect thinner. They offered two types of thinner and my dad used the brushing thinner vs the spraying thinner due to running out. This slows the drying time therefore the finish came out like a semi-satin vs a flat like the top. All in all it looks cool.