I was recently given a Babe Bee in the dark blue blister packaging, $3.95 price on it, instructions sheets on back, no litho date. Has Thimble Drome and stars on tank, no spring starter groove, later 302A head, new cylinder with new style piston, package is sealed. Backplate has small opening with no screen or markings, brass plated, big knob on needle valve Was this the first packaging used for the Babe Bee? What years was this version produced? 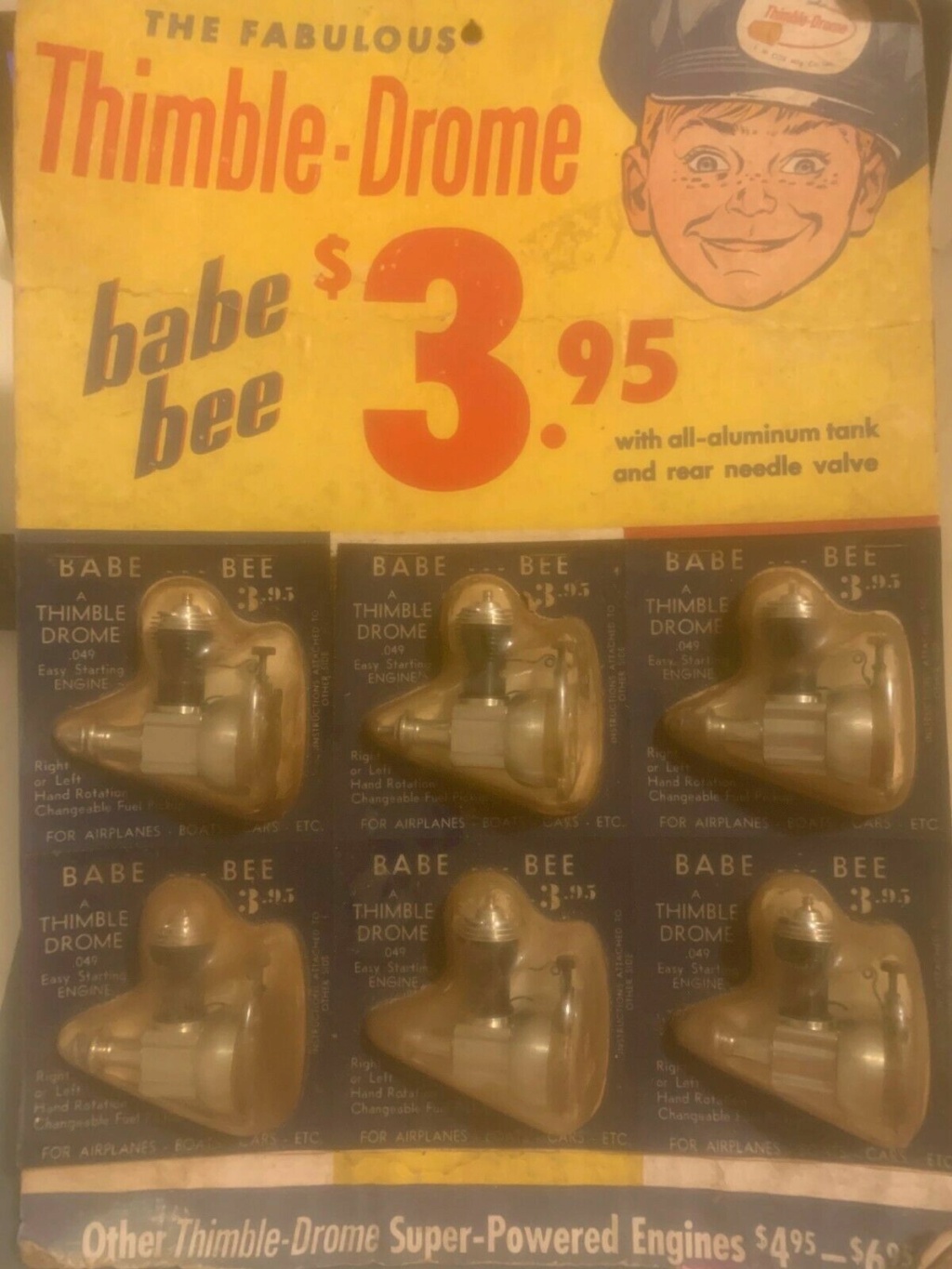 Is this the one ? I was looking for something else but can't find it

Dan Sitter's COX Model Engine handbook says the backplate you described was still in use in 1958, but Babe Bees in 1960 had already screened and marked backplates. I am not sure which "new cylinder and piston" you mean, if it is thin wall cylinder with 2-piece piston, it may also have been from 1958..1960. The tank lettering was still used in 1958 and later, as was the big knob on the needle valve.

So with all these overlapped, I would say the backplate you have that was discontinued by 1960, your engine should be born on or before 1960.

Some of the mass produced standard and replacement engines were sold in blister packs. Usually a larger blister card held several engines of the same type so that the dealer could simply rip off what the customer needed (yes, a real rip off!).

You can also see that how the design of the cards was more or less heavily modified every two years or so (Babe Bee 1959 in black and 1962 in red).

Typically each card contained 6 engines - the examples show a single engine or, in case of the Babe Bees at the bottom the two engine packs attached to the header strip. Four engines have already been torn off at the bottom of the card.

The ”rip-off” cards were advertised in a dealer catalog as late as 1978, I guess the basic engines went from blister packs directly to card boxes soon after that, or was there ever a jewel case packaging for these? 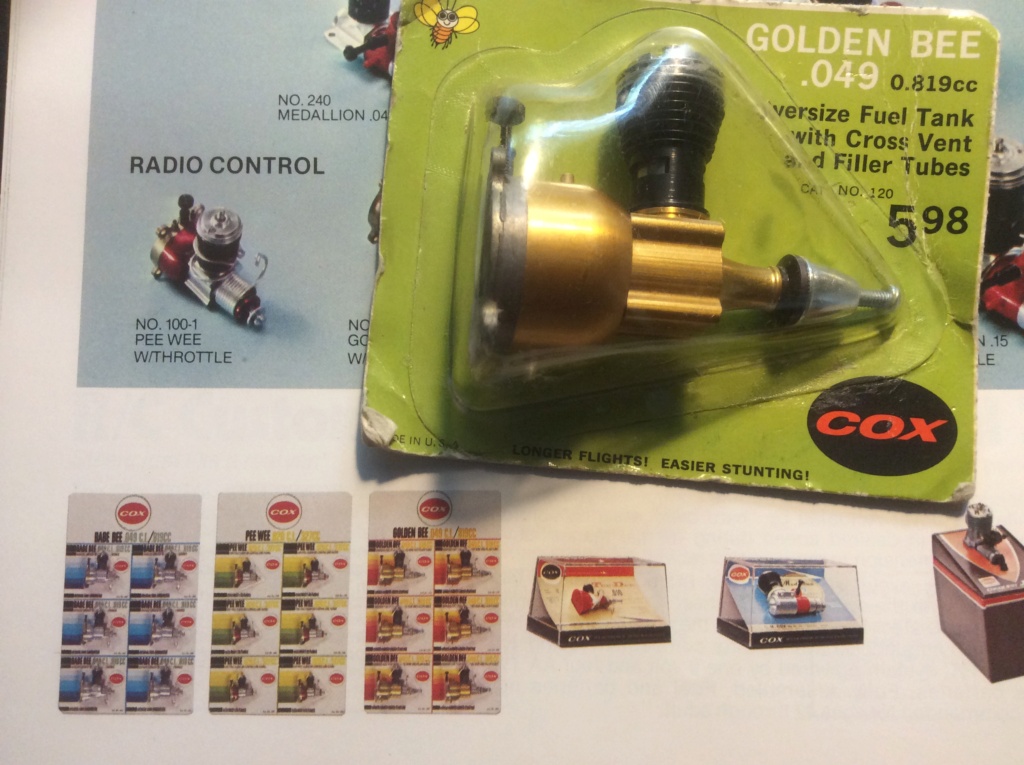 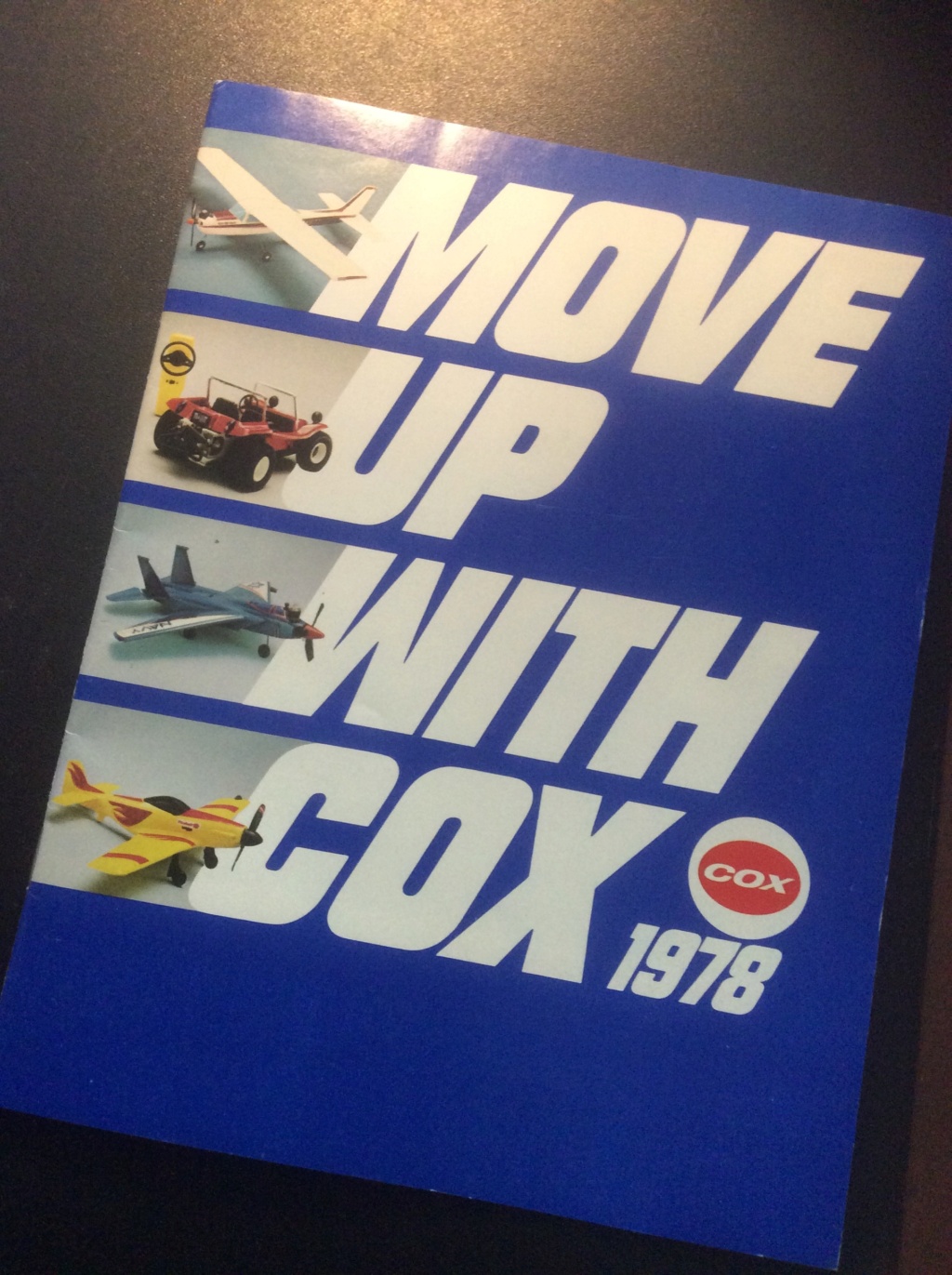 The packaging transition from the Space Bug Jr. to the Surestart. There are others but these represent the most popular of the Cox engines. 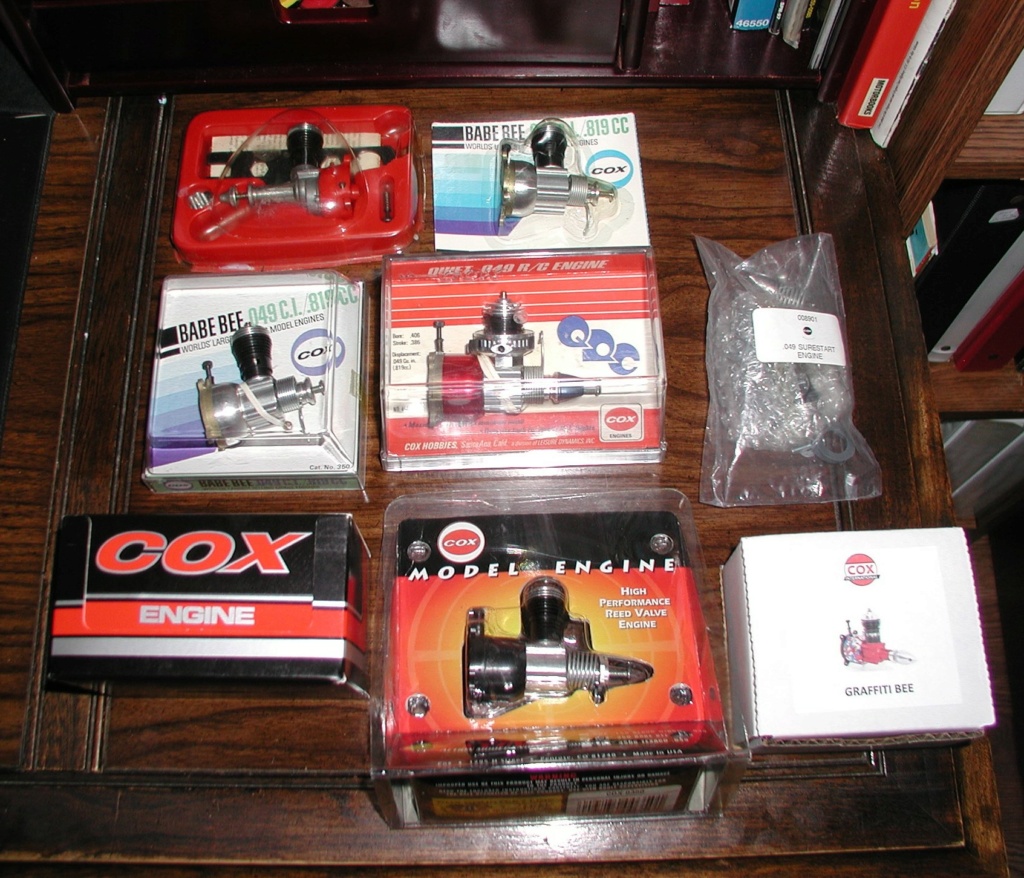 From my well travelled and abused Space Bug Jr. to the casually slapped togther and packaged Surestart to Cox Internationals Specials.

All are quite unique, but I do remember the multiple card engines. Wish I had enough money at the time to buy a whole card full, but that would have taken a weeks pay at the time.

Mine looks just like the six blue packaged $3.95 ones above. Mine is still sealed in that exact packaging. I believe this is the 1st run Babe Bee because of the price. Later versions came in red package and price went up to $4.95.

I just wanted to conform that
the dark blue blister pack was the 1st release of the Babe Bee.

I have never seen a Babe Bee with the old 3 piece piston and 302 head that was original, as Cox had moved to the thin wall cylinder and 302A glow head (56 and later) by the time the Babe Bee was released.

I have seen earlier Space Bug, Bug Jr, and Thermal Hopper cylinders that were put on Babe Bees by owners, but they were not sold that way.

The evolution of the Babe Bee is well documented some where in this forum by Mark Boesen. I can't find it. The early Bees had a silver colored backplate, three piece piston and finned glow head. The very first Bees had flat head screws then  fillister. I believe the first tanks had no markings also. 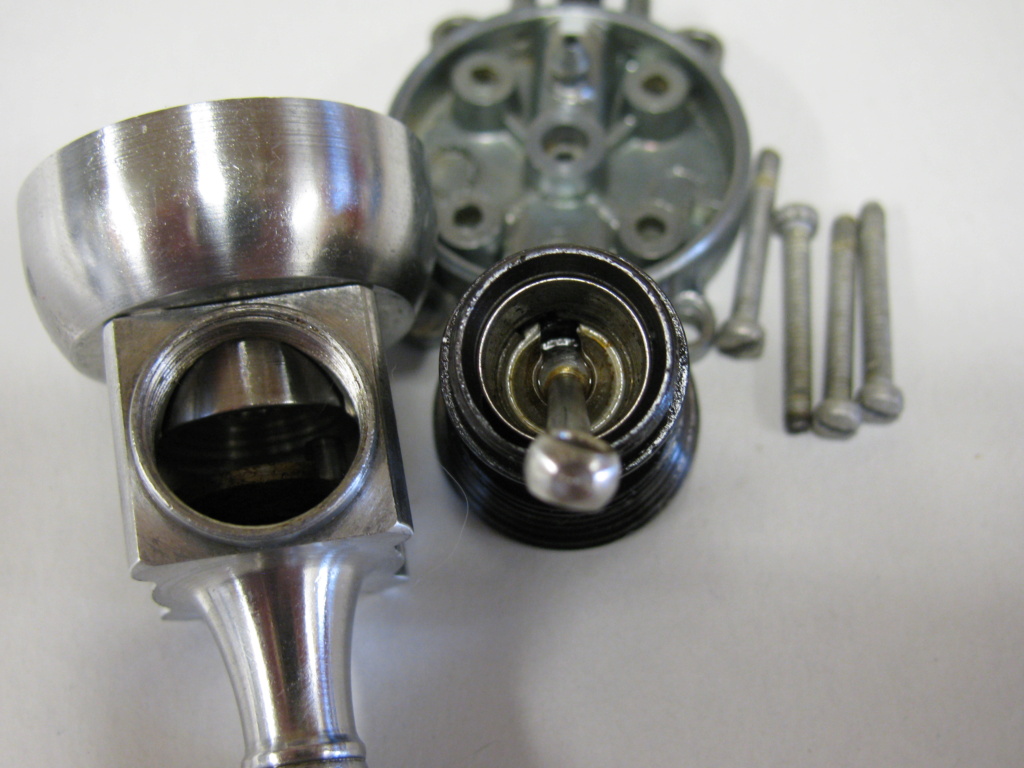 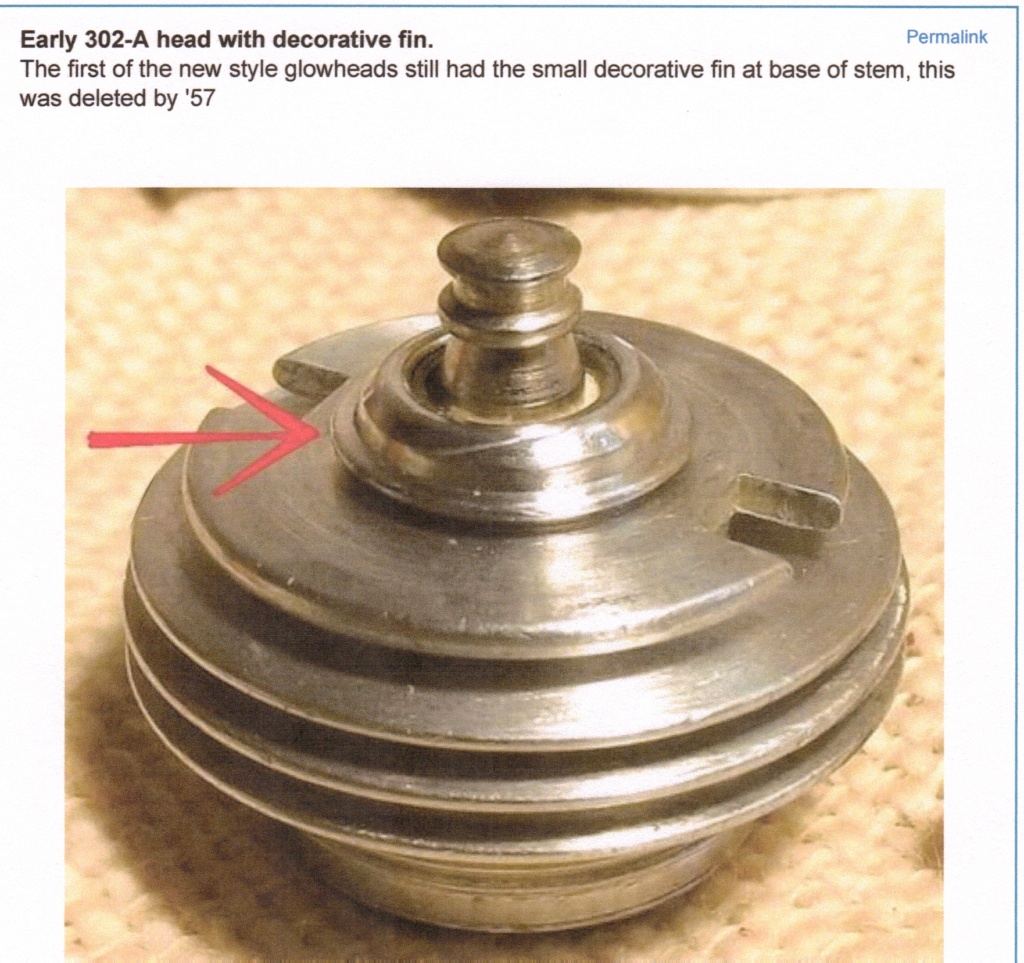 What was the packaging for the 1st Babe Bee? Was it the dark blue card, $3.95,  with blister, like shown in this post?

I ask these questions because when I worked at Cox, they told me to carefully check the Bug series engines as they could have either the early 3 piece piston/cylinder/302 glow head, or the later style thin wall cylinder, new style piston and the 302A glow head, but they never mentioned having to check the Babe Bees  for early heads and cylinders.

It seems odd that the Babe Bee would have the earlier piston because they had already released the newer style piston with the newer thin wall cylinder, and 302A glow head on the 2nd generation Bug engines BEFORE the Babe Bee was in production. It makes me wonder why they would take a step backwards and use the older version top end. One possibility is that they had a ton of the older style top ends still in inventory.

I don't know about packaging. My oldest Bees have the newer cylinders with three piece pistons. One on the right has the glowhead with small fin, one left has glowhead with fin removed. The one on the right has flathead screws so it is very early. Both have silver color backplates and no tank markings. It is my opinion that Cox used the older pistons till they ran out. 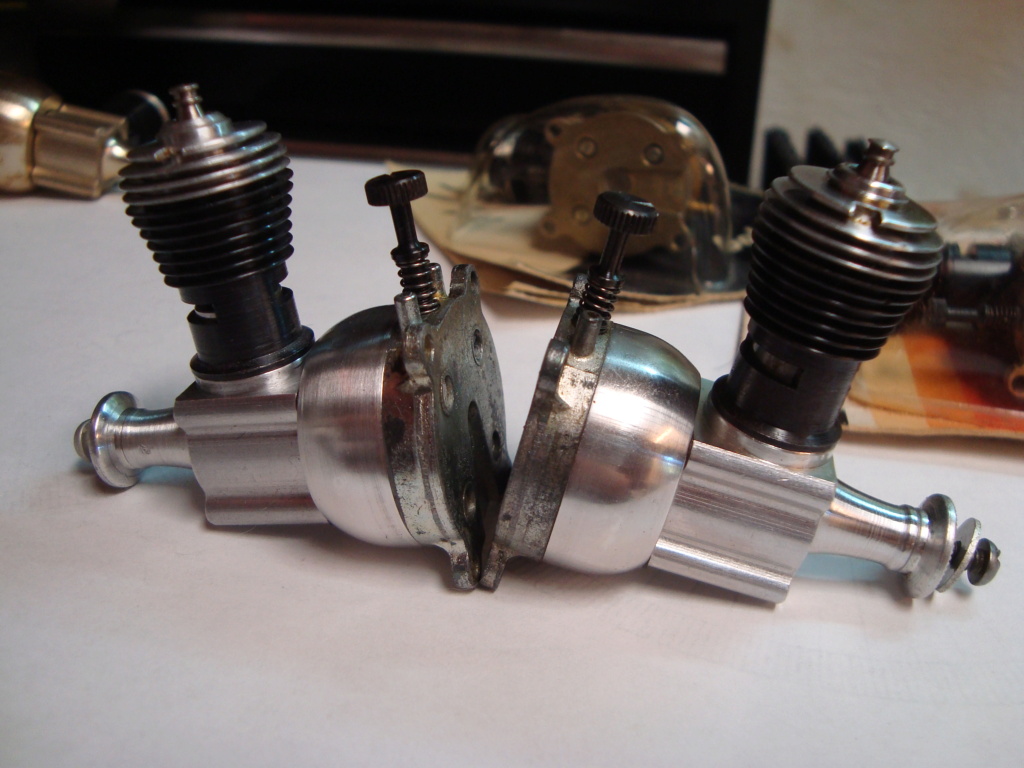 This is my oldest Golden Bee. It has the new cylinder with three piece piston and glowhead with fin removed. 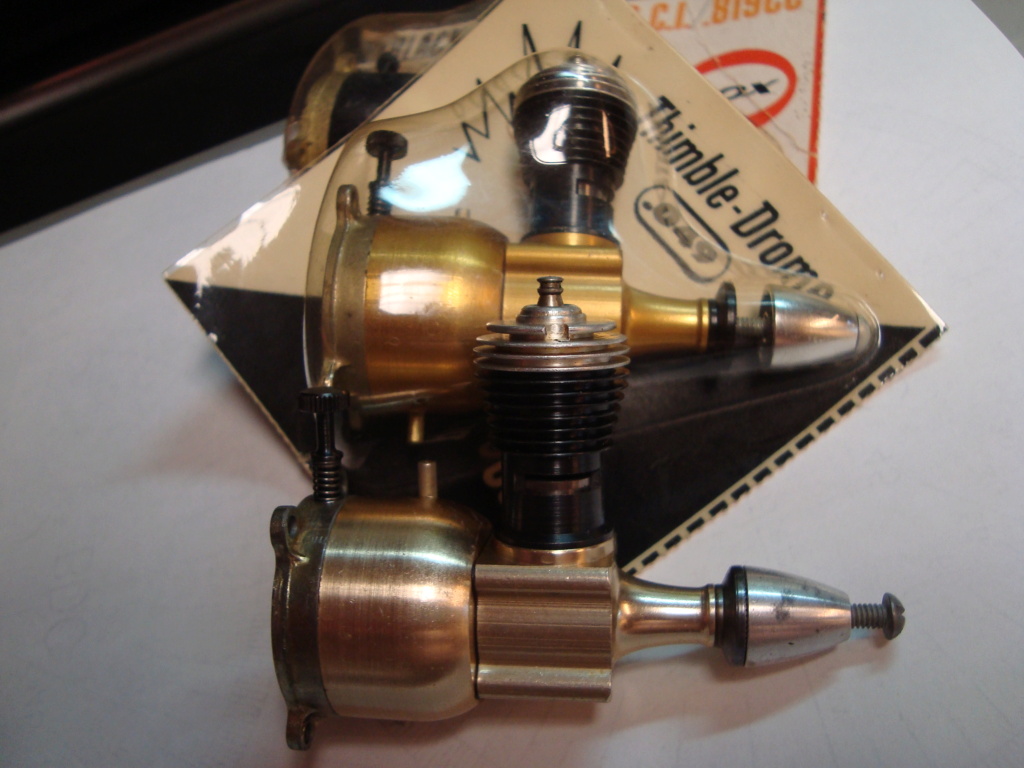 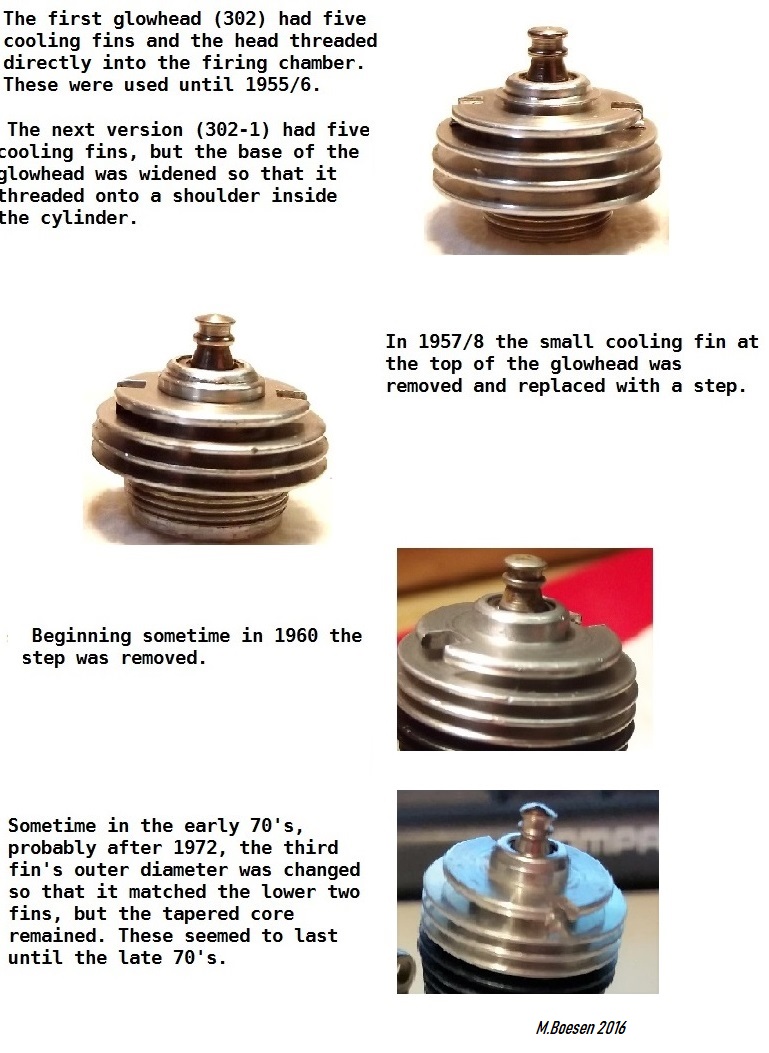 This is the oldest packaged Bee photo I can find. It has the light copper color backplate with no tank markings. 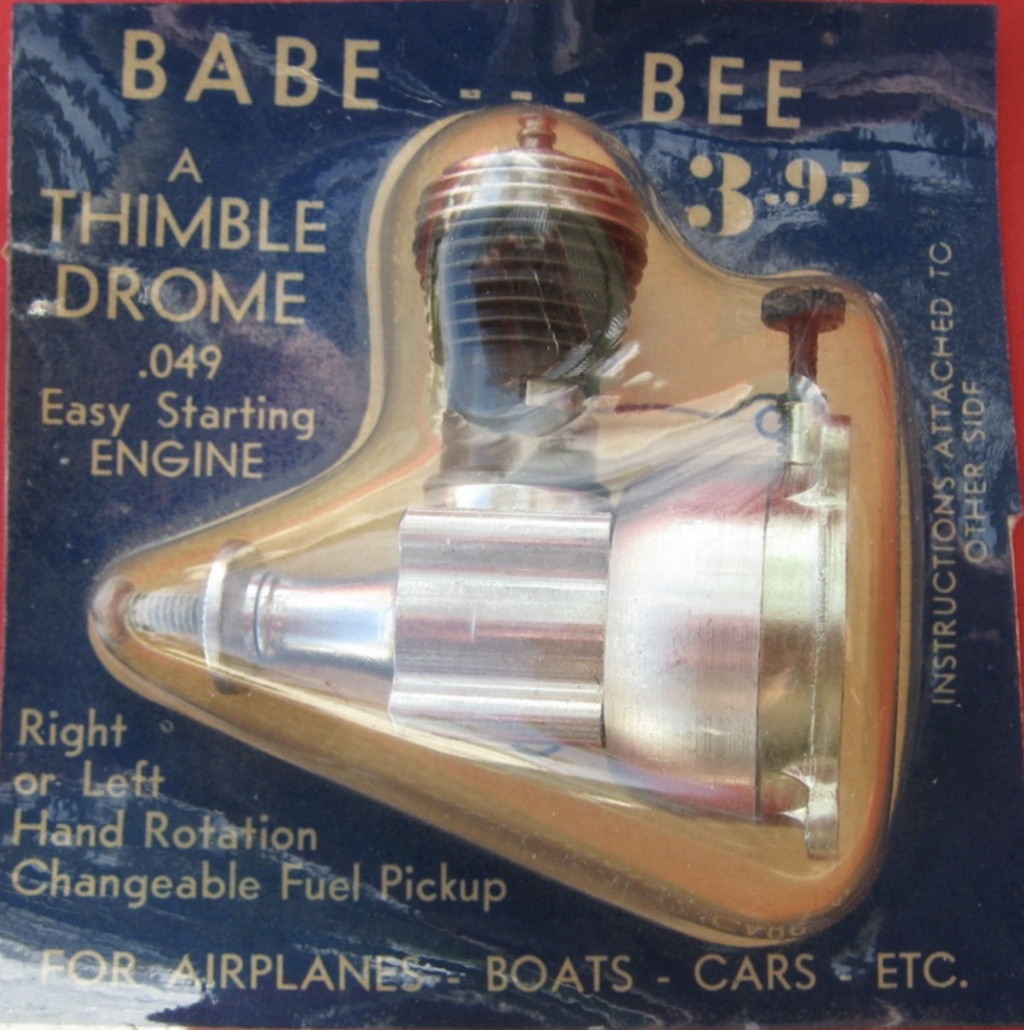 Thanks for the photos and details. My Babe Bee is in the same package you show above, the dark blue card.  It has the 4 fin head with step, brass backplate, and Thimble Drome on the tank.   So it appears that the engines had minor changes, but the packaging remained the same for about 2 years. There also seems to be a variety of parts used during 1957 with some engines having earlier, or later parts. In production, this is called overlap, and it mattered not to Cox as long as the parts were compatible and worked correctly. We would not stop production just to wait for a newer revision of a part to get finished if we already had earlier parts that would work. With 300 plus people on the line, it was critical to keep everyone busy working and no idle time waiting for parts.

Cox would run huge lots of parts at one time, and they would sometimes sit for a while and not always get used in the order they were produced. This is because at Cox we had what was called 1st operation, 2nd operation, and final machining ops. but they were not always linear due to production scheduling of the machines.  Another thing is the anodizing, which was done outside, and in large batches. We would send out a huge bin of parts to be anodized and so with the tanks, it is entirely possible they were a mix of stamped and unstamped tanks that got done in one batch and they did not bother to sort them when they came back.  I also observed that on the assembly line, they used whatever parts were available that would work, regardless of the revision.

For what was called product engines, ones to be used in the planes, boats and cars, they could be exactly the same, or slightly different from the package "hobby" engines depending on what was available when they were assembled.

The cylinders were sent out to be carburized black after they were bored and the exhaust ports cut.  We would send out huge bins of cylinders and it was anybody's guess as to which bin would come back 1st. The pistons were also sent out to be copper plated prior to hardening, grinding, and the rod being swaged. So  it is entirely possible that they used older pistons  to assemble engines while they waited for the newer ones to come back from plating. Again, this would be because they had over-stock of the earlier pistons and were using them up as needed to keep production rolling.

This free mixing of various componenrs still resulting in a uniform and dependable quality would not have been possible without the legendary tolerances...simply amazing even 50 or 60 years later by when the machine industry has leap-changed and developed astronomically..

Thanks again for all the input and great photos!

I recently spoke with one of the top quality inspectors that worked with me at Cox and he explained that the main production was comprised of "product" engines slated to go into ready to run/fly plastic products. Hobby engines, packaged fro retail sale were only a small fraction of production and therefore would be done in small runs when time and parts availability permitted. For that reason, there was not a lot of consistency. Cox would use whatever they had at the time, regardless of of what was the latest revision, so dating by when a certain part became available is not always accurate.

To his best recollection TD .049s were run in small batches of 5 to 8 thousand a year, and he said that was also true for most of the other hobby engines, with Babe Bees being produced in bigger numbers than the TD series. Over-runs of parts for a certain model of engine were set aside in the warehouse until the next run was scheduled for that particular product. But that is not to say that they did not get used for another version if they were needed. So sometimes a run of engines would be made with a mix of old stock parts, and new parts, it all depended on the size of the run and how much inventory of finished engines, and parts they had.