2 pics each of three engines. Should all be 049 Novel / AMA but can someone specify the exact would like to auction them on eBay today, together with about 200 other used engines (mostly Cox), that we have been auctioning for weeks and will be doing for many weeks to come: https://www.ebay.com/usr/cocolocotrading 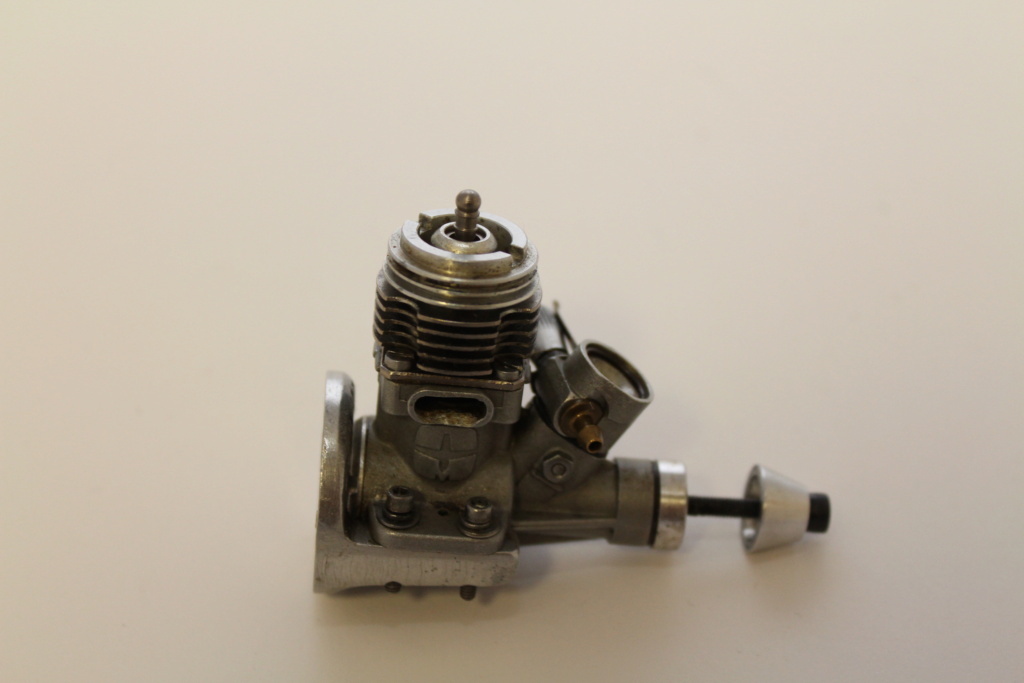 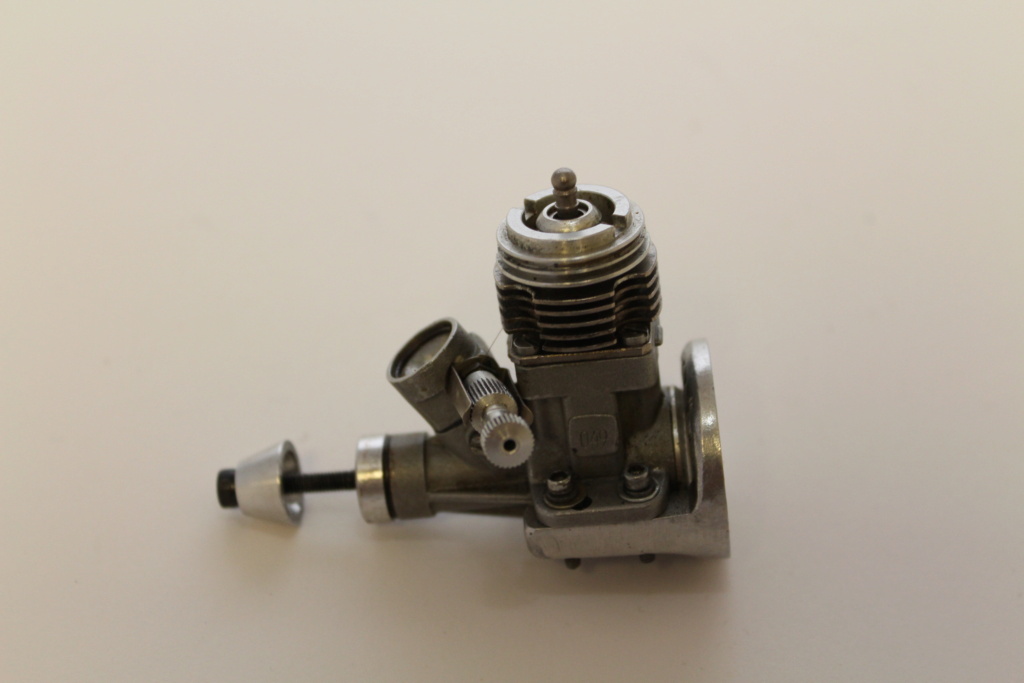 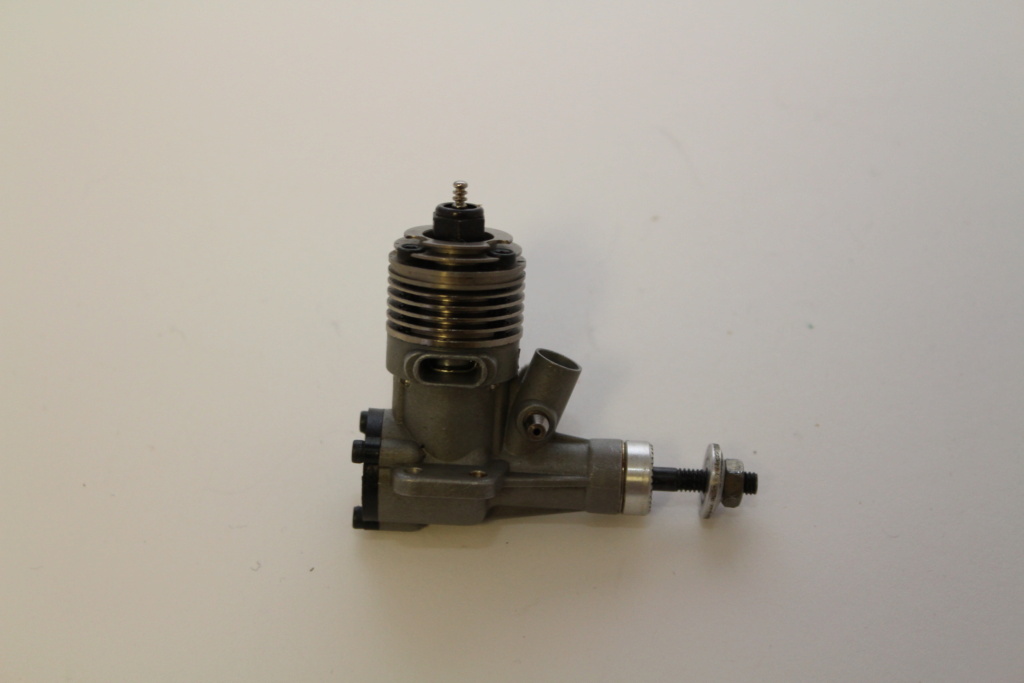 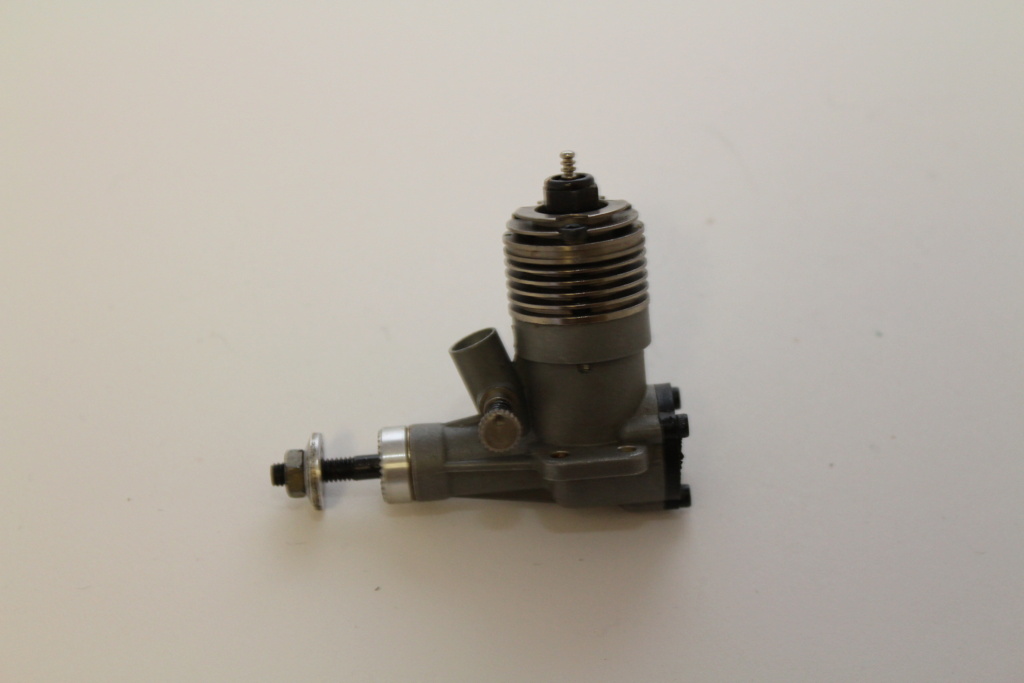 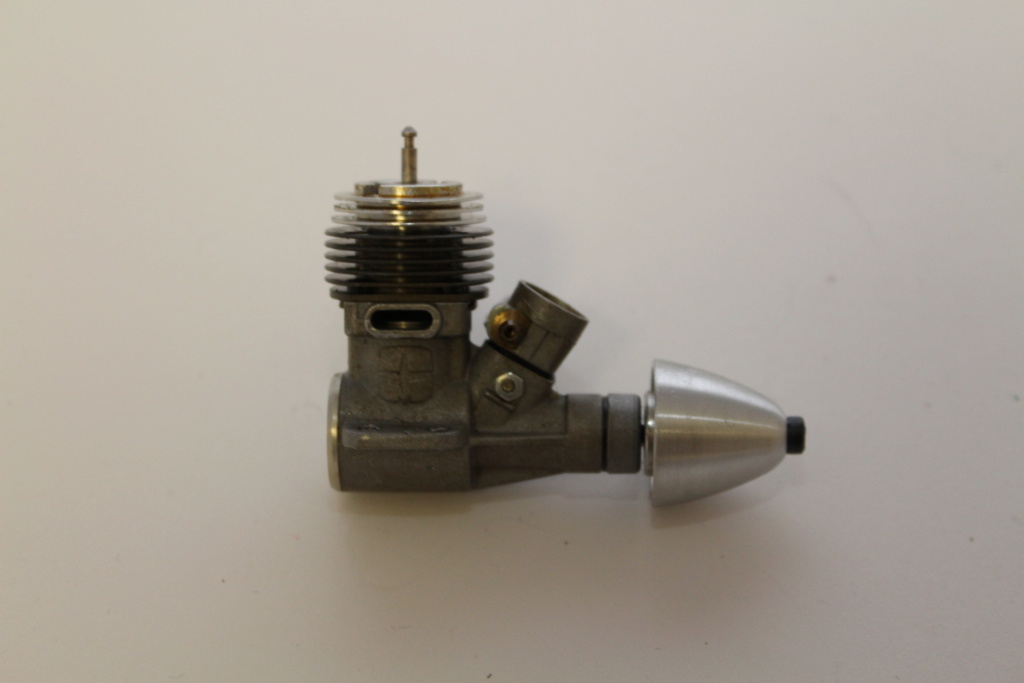 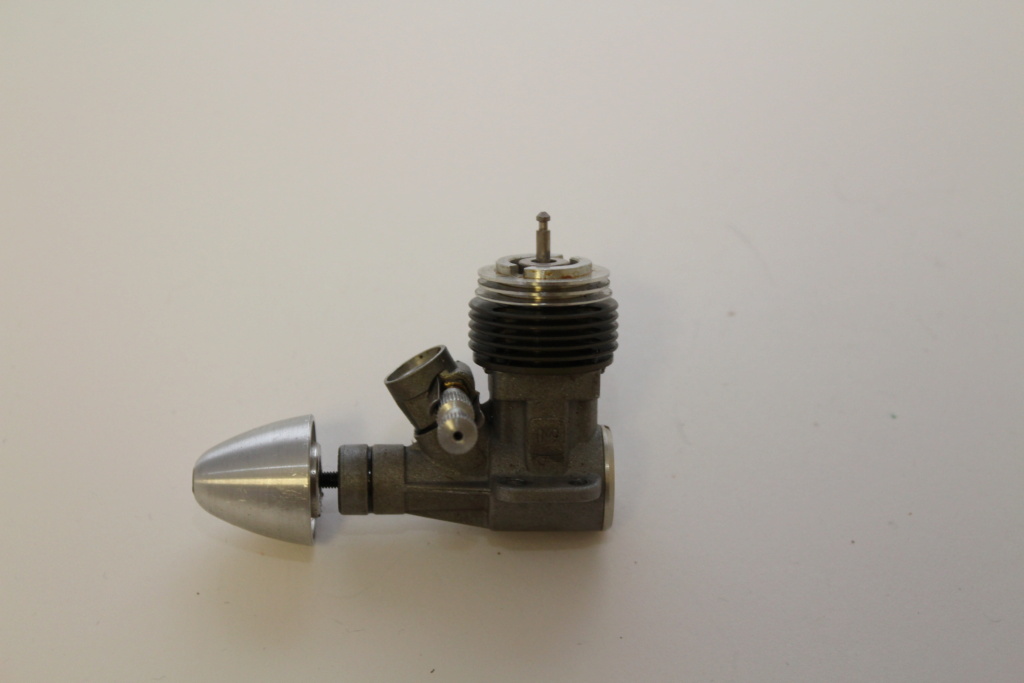 Bernie those with the 4 pointed stars on the cast body are Norvels, I have them in their original boxes... 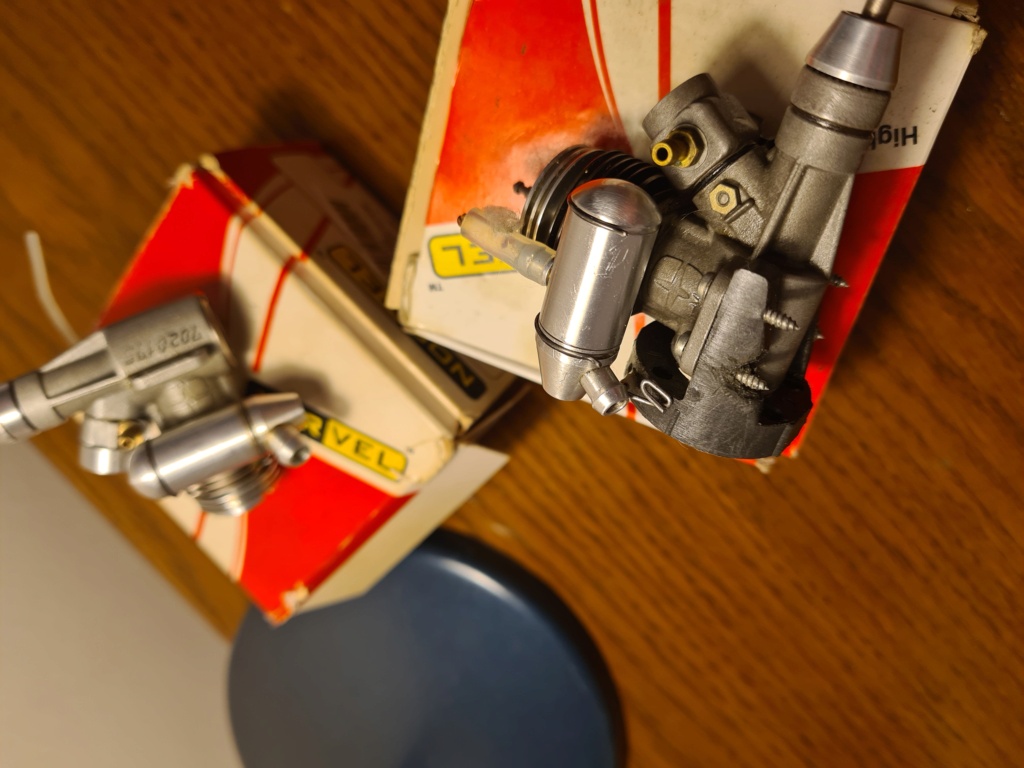 I am not sure about the others though..

Yes thanks Andras, we know that they are Norvels but were looking for the exact model names in order to list them correctly.

These are Big Migs both. The one with the black fins has its cylinder and piston treated with a  coating called Revlite, which is supposed to extend engine longevity.

They are referred to lately as NV ( Northern Velocity) engines after the manufacturer changed its ownership following the Norvel times.They are still sold in Norvel brand boxes, but the instruction sheets carry the NV logo.

So I suggest you advertise them as NV Big Mig engines. 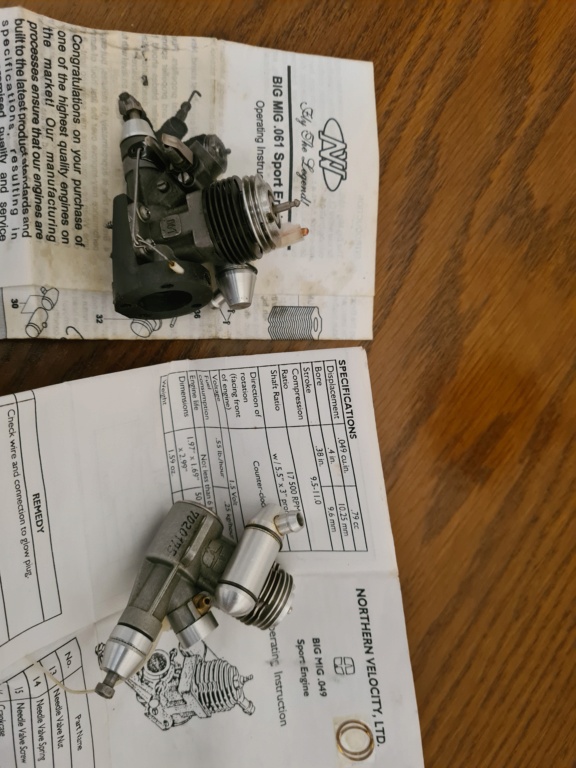 Might also be better taking the head off to verify if it is an AME or Big Mig as well so it is not misrepresented and someone to file a claim with you. AME will have 3 bigger ports and Big Mig will have 5 smaller ones.

Hey y'all!  I believe I understand the inquiry a bit more specifically.  Are they .049's, .061's or .074's?  For certain, that is what I would like to know because I have been hoping to find a couple of .074's to replace the .049's I have in my C/L Grumman Widgeon.  The mounting bolt patterns are the same according to what I could find about them.  Thankfully, my engines run just fine, but I believe the little bird needs and deserves a bit more power so I can try flying off water.  When I ran it, it was situated in its cradle and with both engines tweaked to perfection, the poor thing couldn't pull itself across the test bench.   Regrettably, I just can't bring myself to / justify buying new ones and nearly $200 each.  I mean, it's only 2lb -5.8 oz, 34" long with a 42-1-2" wingspan. 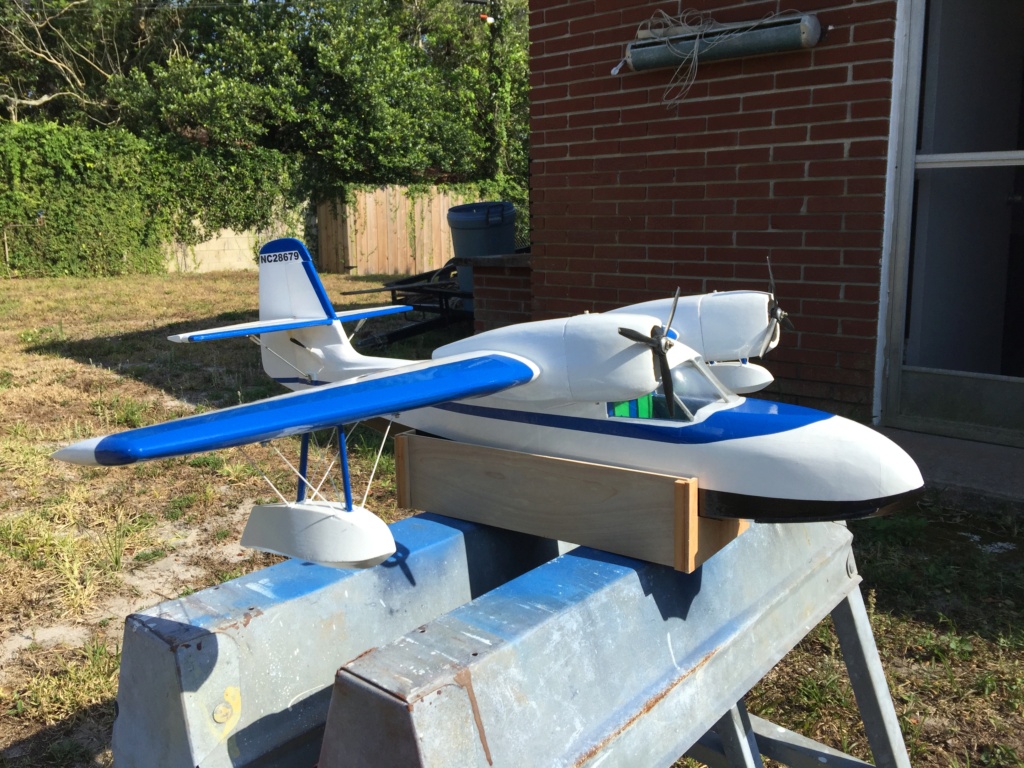 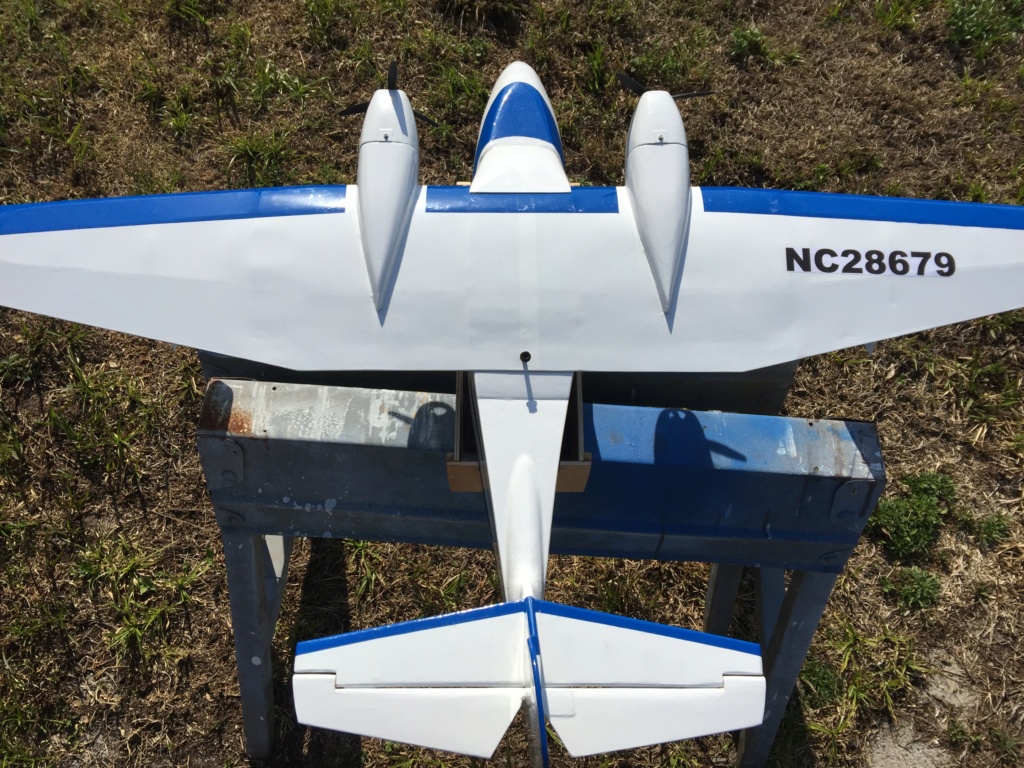 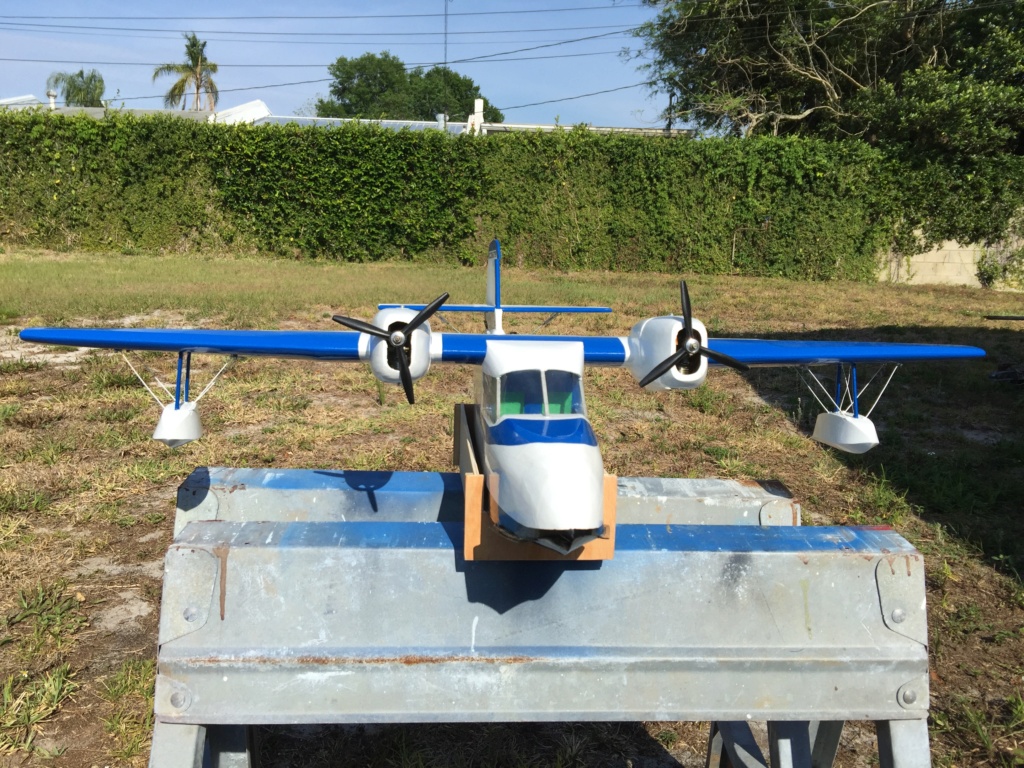 Mabe Norvel big mig wil fit this plane ?? Who is superb by the way

"Only"?
That's is a whooping 38oz(!) and it is the main problem I think. I only fly RC, but aim for around 10oz of max weight for a (single) .049 engine. The three-bladed props will not help with thrust either...

I think two plain bearing .10 engines would be the way to go. They can spin 7x4" props and that will really help with the thrust (if there is enough clearance for the fuselage). Two Norvel .074 engines might also work, but then you likely need the APC 6.3x4" props. The mounting holes for the .074 differs from the .061 and .049 Norvel engines.

Agreed-the second set of photos is a Brodak Mk2, not a Norvel of any description. AFAIK, manufactured in Moldova for Brodak

So, one is a Brodak and the two others are Norvel. Just saw that both Norvels are stamped "049".

The engines are stuck and no time to take them and the other 200 engines apart, so will just list them as ".049 Norvel".

Yep, you got it! It was my typing boo-boo when I wrote "each". The little woman still won't let me near the checkbook or credit cards, doggon'it!!

"Only"?
That's is a whooping 38oz(!) and it is the main problem I think. I only fly RC, but aim for around 10oz of max weight for a (single) .049 engine. The three-bladed props will not help with thrust either...

I think two plain bearing .10 engines would be the way to go. They can spin 7x4" props and that will really help with the thrust (if there is enough clearance for the fuselage). Two Norvel .074 engines might also work, but then you likely need the APC 6.3x4" props. The mounting holes for the .074 differs from the .061 and .049 Norvel engines.

You're probably right about using a couple of .10's, which I have in my collection. Here's the horror story: I found the plan while surfing on, either Outerzone or Aerofred. It's an 80", .60 size r/c model. Well, I downloaded the plan and in thinking control line, reduced them to the 42-1/2" wingspan and started building, totally oblivious as to what engines I would need. Dimensionally, I built it exactly as the plan came out, substituting wood sizes as appropriate. Well, when it came time for engines (I had already built the nacelles) the only thing that would fit was these two .049 engines that I already had on hand. I would have had to rip off the nacelles and completely rebuild/redesign them to use my OS .10's which are substantially larger in height, width and length. Plus, I would have had to scrap, design and make two new tanks. Needless to say, that was not something I wanted to do at that point, thus my looking and researching the Norvel .074 which will fit the spacing of the engine mounts as built!!

The plane as is is NOT an aerobatic plane any way so enough UMMMPH for over head 8s is not required. I gotts to think, IF they fit,

a pair of synced up Norvel 74s with the correct props may just haul that puppy around the circle just fine. I might even be tempted to see if a good pair of Cox TeeDee .049/.051 would swing and good enough set of props....while love the screaming 29~32K Rpm Norvels they really need a smallish prop to get into their power band...they go like stink on a very light

PS
Sorry Bernie for the off topic hijack