A first for me. And spot the problem.

A first for me. And spot the problem.

Off topic yet again, seems as much as I want to spend time playing with toys I can never find the time. Something always comes up. This time the old Dodge pickup developed a very noticeable whine in all forward gears except 3rd. I have had a rebuild kit sitting in my shop since 2012. I decided it was time to put it to use. I have rebuilt several motorcycle transmissions, but never an automotive one. Clutches, seals, input shafts etc. just never a full teardown.

The transmission is a New Process A-833 Overdrive. The A-833 was in use in various forms since the mid 60’s thru the 90’s and was behind nearly every Chrysler engine from the slant 6 to the 426 hemi. It’s a pretty robust unit, rarely gives problems. My 833 is the Overdrive unit with 4th gear being .73 ratio. I installed it roughly 12 yrs ago. It started life behind a slant 6 and then behind a 318 and it now resides behind a 360. Never rebuilt!

Took me 3 days from pulling it to buttoning up the side cover this morning. A lot simpler than I thought it would be. I had a Chiltons manual to help me, but it certainly didn’t cover everything and the internet was absolutely no help for Overdrive units. I took a few pics along the way so I could reassemble correctly. My question for all you gearheads is what was the nail in the coffin? It’s in one of the pictures… The main bearings were shot which is what caused the whine, but my question is what was the catalyst to the failure? 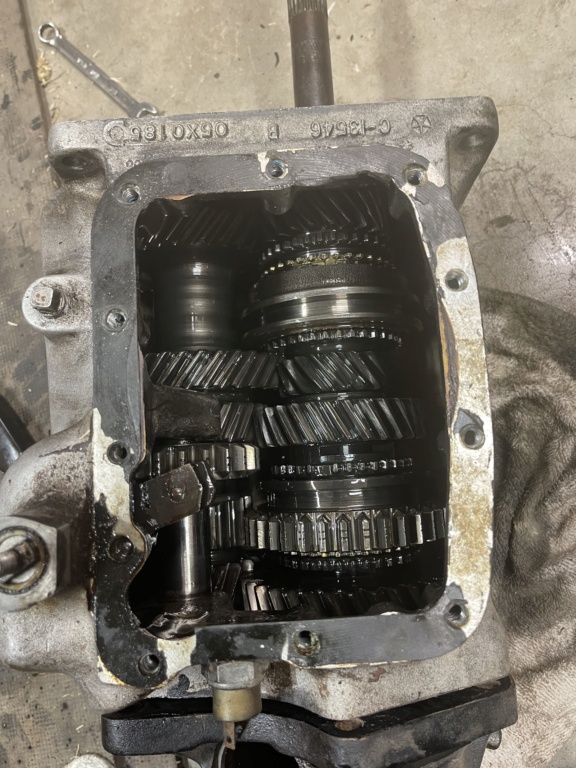 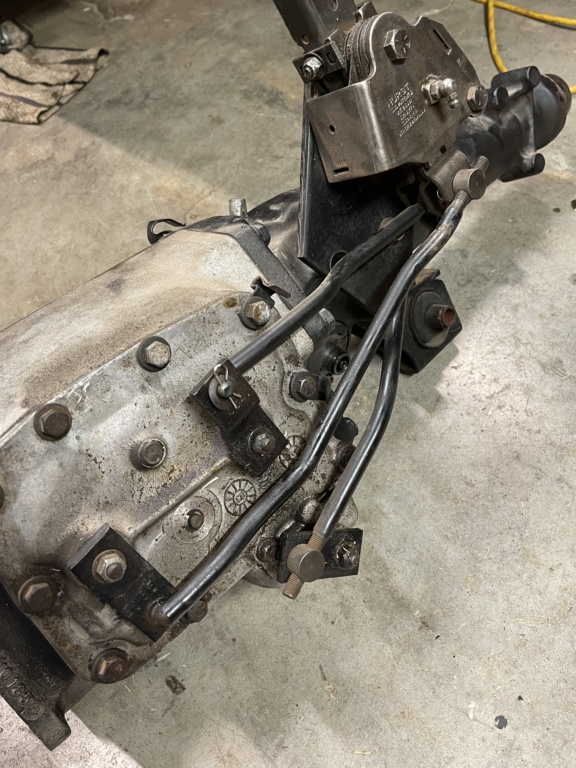 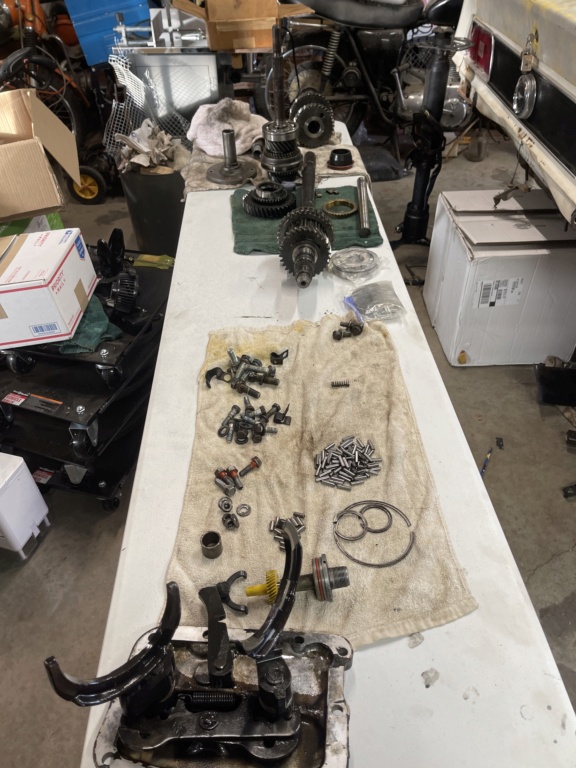 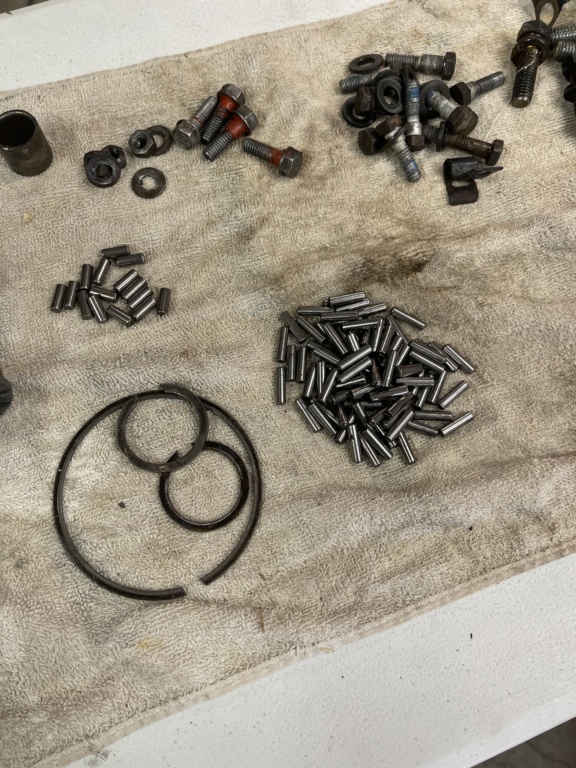 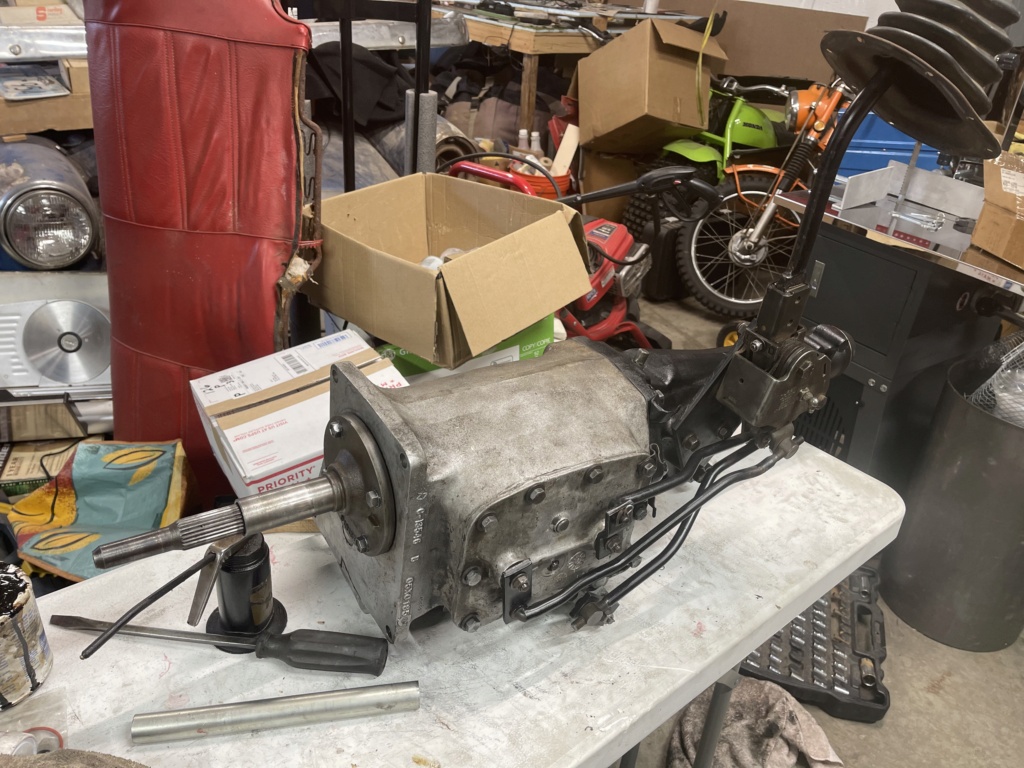 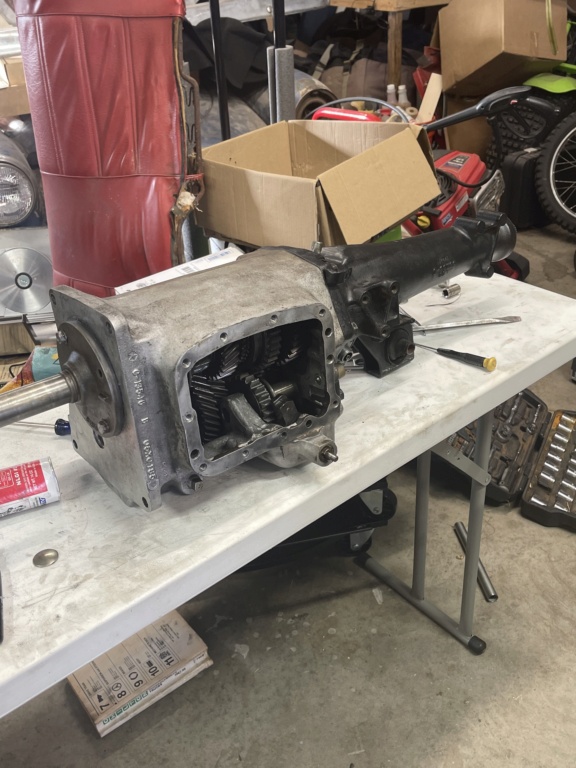 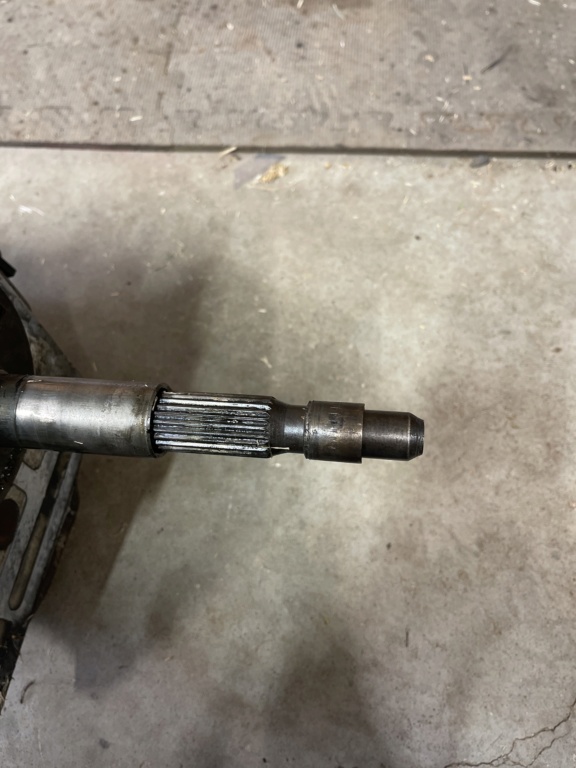 What do I see?
No wear pattern on the nose of the input shaft (from pilot bushing/bearing).
Odd position of what may be a mis/dis-placed pilot bushing with weird rub marks on the end closest to the splines,.and bite marks that are spaced as if the driven disk rode over the bushing at least once.
Missing tooth on one synchro, and another with a pile of brass between it and the adjacent gear (near top of picture).
Funny wear marks inside of shift fork,.possiy causes by an input shaft with zero crank end support, and only the support of the bearing between input/output shafts, which shifted all around inside the case until actually contacting the inside of the shift fork with evidence/wear in the wrong spots.

Ok...I'll guess a pilot bearing shifted out of position, quite possibly allowing for non-existent/insufficient end play in input/output shafts, causing excessive wear to first synchros, and then bearings within the I/O shafts, until both gear sets started interfering with fixed gears on the cluster gearset. Evidence would have been excessive force required to row through the gears, a steady shedding of brass showing up during Tx drain and fill, until more-silvery metal flakes showing up in Tx drain/fill later on. All of this until the gear sets started encroaching on each other, at which point, even the deaf could feel the noise " by the seat of their pants.," 1,2,OD all require the bearings between to support the difference in rotational speeds, but 3 is your straight-through gear, so all I/O shaft/gears spin the same speed. Significantly less noise occured in 3rd, I bet.

I'm pulling back the interference between I/O shafts and cluster gears. But the I/O shaft displacement could have caused unusual wear inside the shift fork.

Your bronze baulk ring of the synchro mesh is damaged and the particles damaged the bearing.

HHmm, looks to me like the lack of lubrication may have caused some slight discolorization of the gears from excess friction. I didn't see a drop of gear oil anywhere on your white cloth work bench!?

Well Jim pretty much got it right away although I think my lack of photography skills caused some lighting effects that made it appear worse than it was.

The stop rings were not damaged at all and there were no bronze shavings or broken teeth. I did replace the 3rd gear stop ring because it had a slight grind when shifting into third since I have owned it.

The shift forks are actually in good shape only showing rub wear in the right places.

This transmission has had a slightly noisy fourth since I installed it years ago, so I knew the rear main bearing needed help before I opened it up.

What caused the whine was the input shaft bearing decided to give up, most likely due to a misplaced pilot bushing as Jim alluded to. Funny thing is I couldn’t figure out what caused the bite marks on the outer sleeve of the bushing. Jim was probably correct that the disc probably over rode the shaft slightly and grabbed a hold of the bushing. Thanks Jim! Mystery solved!

The weird thing is I never heard a knock or rattle of the input shaft dancing around inside the crank. I ordered a roller pilot bearing so that doesn’t happen again. If it ever gets here….

Marleysky wrote:HHmm, looks to me like the lack of lubrication may have caused some slight discolorization of the gears from excess friction. I didn't see a drop of gear oil anywhere on your white cloth work bench!?

It had a full case of 80w90. I just drained and cleaned before working on it. I don’t like working with greasy parts!

I did adjust the rods once, as reverse was a pain to engage/disengage. The rods really only affect how it shifts.

I had a big problem with a SS with a 4speed Muncie in it the pilot bearing had walleyed out the where it inserts so after to many times replacing and pulling the trans i got an oversized one that cleared it up . Those marks could bee were someone tried to tighten it up by expanding the metal

The misplaced pilot bush would definitely have contributed to the input bearing failure, allowing the input shaft to "rock" from side to side, placing a lot of undue pressure on the bearing. The noise in all but the direct-drive gear (in this case 3rd) can make it easier to diagnose. The spigot bearing in the rear of the input shaft is a common failure in many boxes and is usually noisiest in reverse, quiet in direct and noisy again in overdrive. This can show up noisy at idle in neutral with the clutch engaged. If the main input shaft bearing is the culprit, the frequency of the noise will follow engine speed. It can still go quiet in direct drive because there is no side thrust on the bearing. Failed counter-shaft bearings can make a similar noise, usually quiet in direct drive because of no side thrust. If the frequency follows road speed rather than engine speed then it is probably the rear mainshaft bearing or the rear counter-shaft bearing, which is under particular stress in overdrive boxes, particularly when towing regularly in overdrive.

Both main and tail were kaput! It was quiet in 3rd. Drove around in 3rd quite a bit for a month. Still waiting on a pilot bearing…. Now the temps have dropped way down and not too keen on working outside. Bearing should be here Monday hopefully, by then temps should be back up into the 50’s.

Ron,
Please take the time to check the crank for excessive wear. The pilot bushing, or even a replacement needle bearing set should be a snug, interference fit. While I normally wouldn't suggest using the Loctite bushing goo (not red or blue thread locker), it may be necessary now..

Your former pilot bushing walked for a reason. An alternative would be to lightly peen the external circumference of the new bushing to create a bit of external displacement. This "poor man's knurling" is a common method of introducing a better/tighter fit in motorcycle fork tube bushings. I did it using a center punch at 90 degree intervals during the last fork overhaul. It doesn't take much to get the desired fit.

I think I would do two rings of three dimples about 20 % in from each end of the new bushing, and starting at 120* around. Is there any chance you have a dial indicator? A sloppy fit could be measured to determine a good measure of displacement. Too much displacement would be removed with crocus cloth or 320 grit sand paper...That is, if the bushing were bronze.

Oh, and if/because the new bushing does require some homebrew "knurling," it will be more difficult to remove from the crank later. A pair of small pick holes drilled 180* apart will get you a purchase point to hook a slide puller hook into for the next time. Of course, if you have a needle bearing , then Loctite bushing goo is the only answer for sloppy fitment. 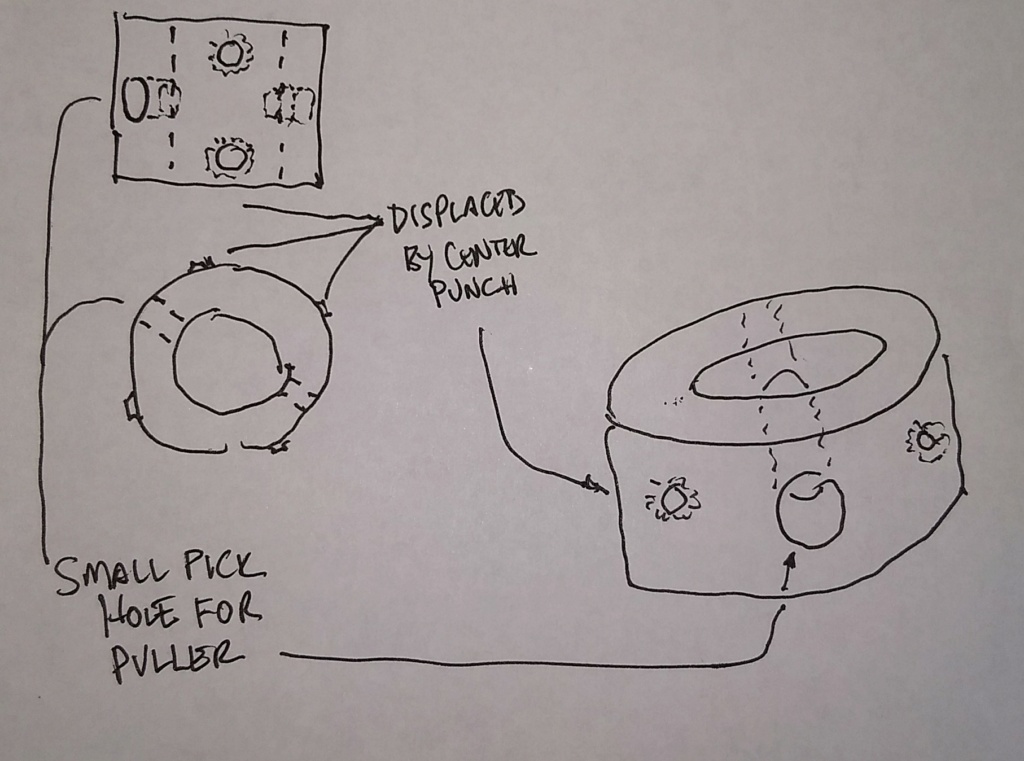 Hey Jim, thanks for the suggestion. It’s probably something I should have done from the get go and good info for future builds if I run into this problem again. I did use red loctite as I wasn’t happy with the fit initially. That obviously didn’t hold up.

I called Passon Performance and described my problem and they suggested that I go with a bearing kit. Reason being as this 360 was in an auto car and the inner diameter of the crank where the bushing resides could have been machined for just about anything. The kit doesn’t use that hole and is supposedly good for all 273-360 cranks regardless of being machined or not for a pilot bush. It was roughly $25 so it was cheap insurance.

I normally deal with Brewers Performance for all my A-833 needs however, they decided to close shop for the holidays. Passon was open so they got my business out of necessity. I’ll take a picture of the new bearing and post it here.

Passon does offer a kit to upgrade the transmission to more streetable and closer ratios. Something that I am very interested in, but it’s not listed on the site. I am assuming it’s a “If you have to ask you can’t afford it” deal. I have another A-833 OD in a parts truck that I could rebuild with the better ratio kit and swap out in the future.

Similar topics
» Corsair, the end of the beginning
» what airplanes have you built? post your pics of the models and feel free to talk about your airplanes
» Not a problem for me BUT
» Rhodium Prices and Glowplugs
» Check out this home made spot welder.