Log in
Search
Latest topics
» Another one ready for the Weekend
by 944_Jim Today at 10:55 pm

» The scrap yard Piper Cub aka Silver Lining/AIRTRUK
by andrew Today at 8:28 pm

» pictures of my engine collection.
by cmulder Today at 12:49 pm

» Scientific King Cobra
by rsv1cox Today at 8:02 am

» The Ubiquitous Yamaha TZ Grand Prix Racing Bike
by Yabby Today at 12:29 am

» There are more and more new  cool engine models
by rmjtools Yesterday at 12:35 pm

» Cox car (Riviera and others) fan/flywheel/drive gear
by pertti_jarla Yesterday at 11:04 am

At the Control Line club meeting this Sunday, I brought my 74 Fighter balsa chuck glider replica that I did for .020 power.  The club president asked if I would fly it at the Old Engine Run event on April first that the club is putting on.  I told him all my stuff was still packed up and I’d need a handle and glow head clip if I was going to fly it.  He said to come over to his house and he’d fix me up.  So I went over to his house and he took me to the garage to get some 1/2A stuff he had pulled out and waiting for me on one of his benches.

He pulled out an old SIG cardboard flight box and started putting stuff in it.  He basically said, if it fits in the box, I can have it.  So we loaded it up. 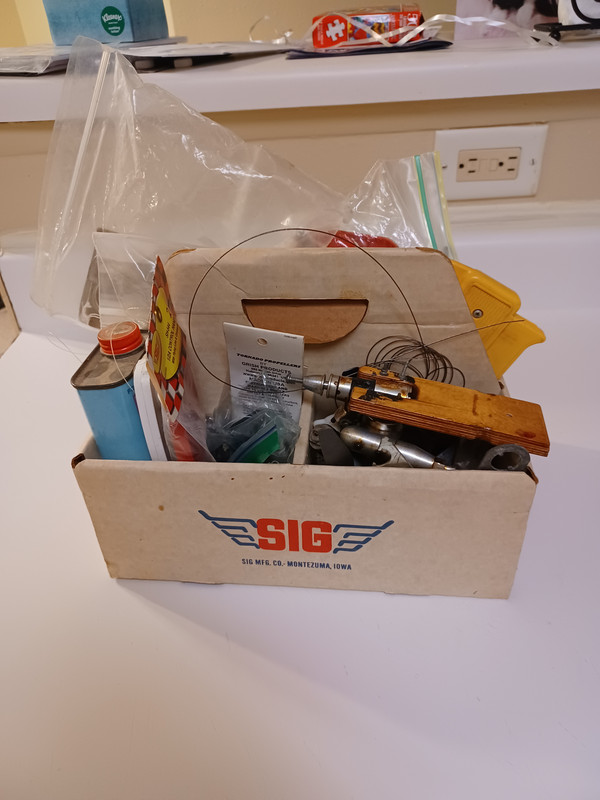 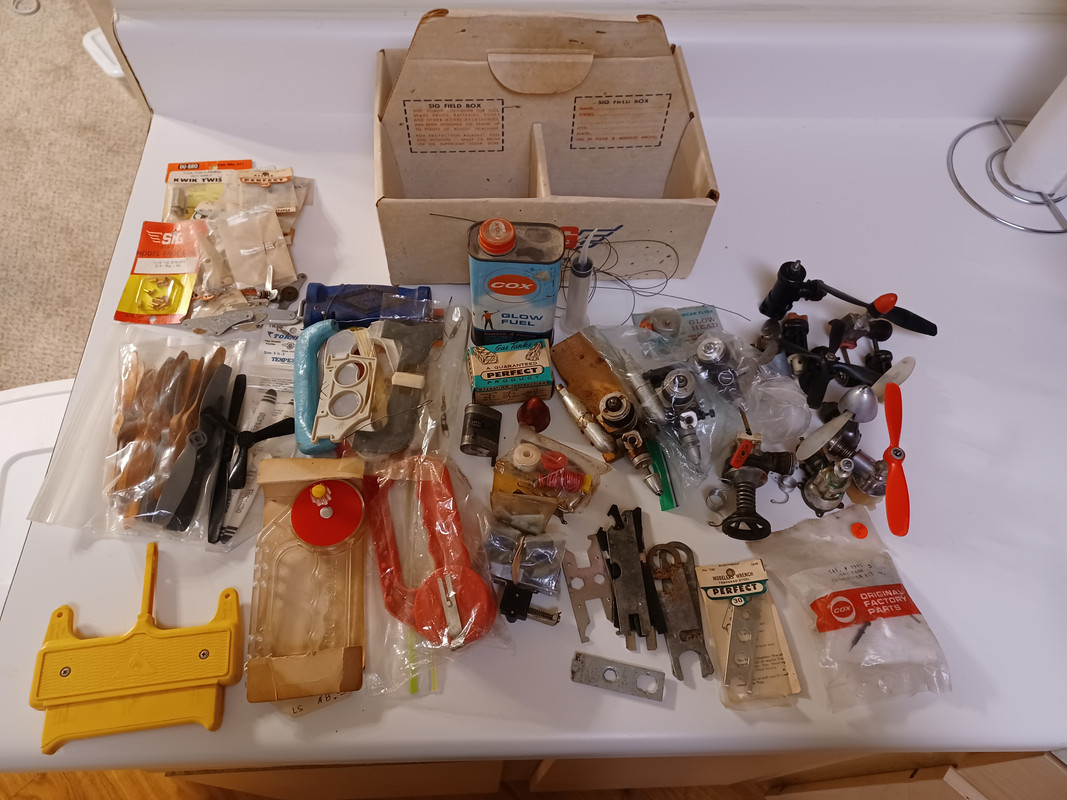 He asked if I needed any props, and when I said “Yes”, he threw a bunch in the box.  He apparently liked faster planes, as there were ten 5x4 wood Tornado props,  wood Rev-Up and plastic Windsor (Master Airscrew) 5.5x4 props, three Cox competition 5.5x4 props, A Cox competition 6x3 and regular plastic 6x3 props, and two-blade and three blade .020 props.  There are also two Tornado 5.5x3 props new in the package. 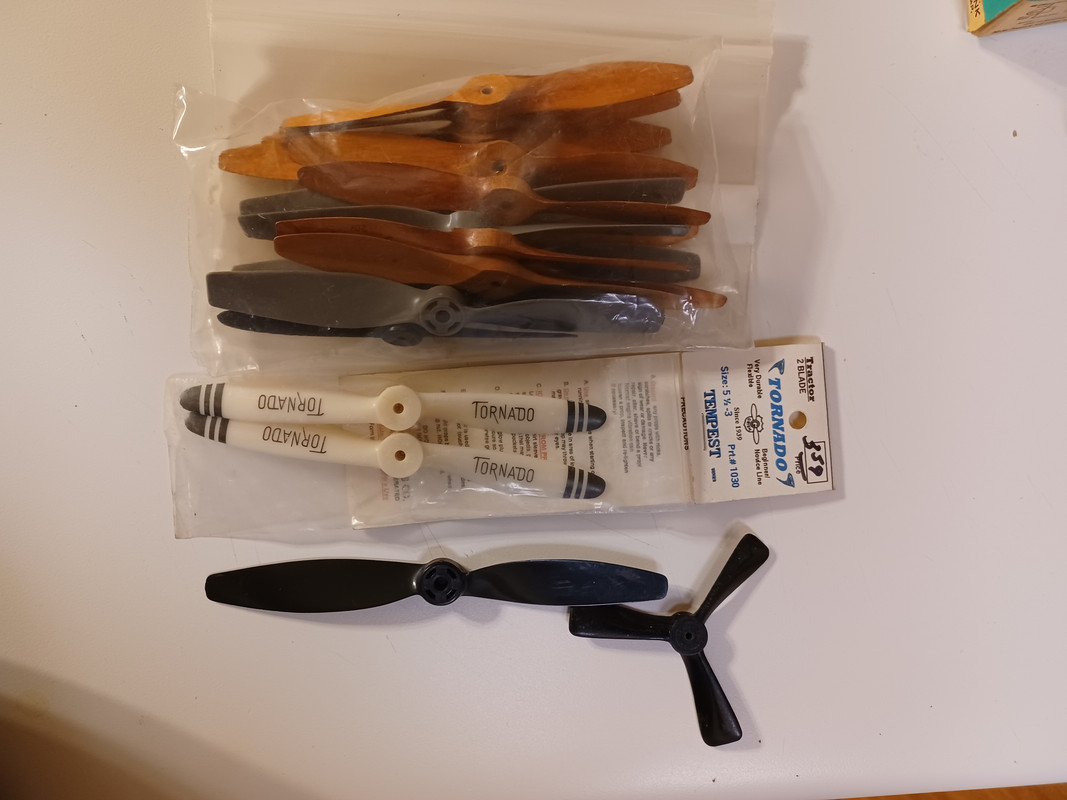 As I walked over to the bench I started laughing.  He asked what I was laughing about, and I pointed to the tub that had ten, Yes 10!, Cox Skylon reels in it.  I knew some people on this board would love to have that box. 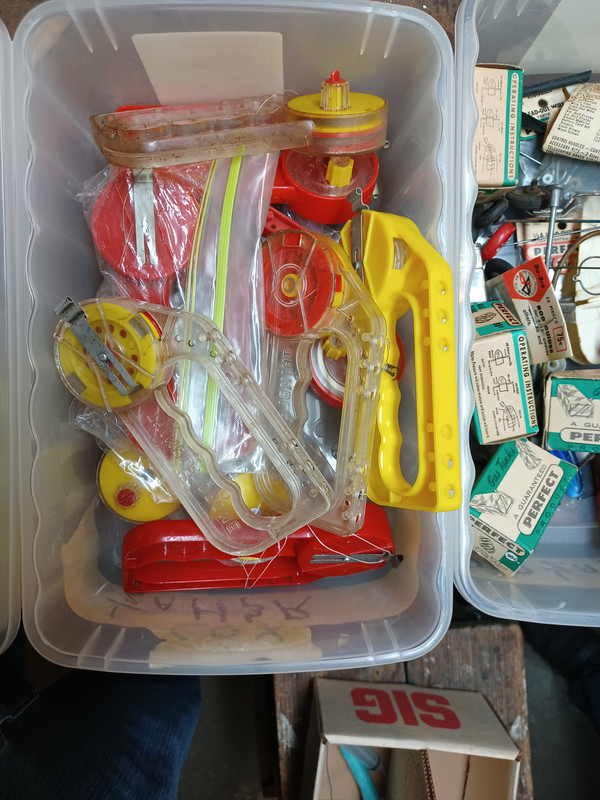 When I saw one handle in one of the three(!) handle boxes it caught my eye, as I’m sure it did Bob in the second picture. I asked him if I could talk him out of the yellow handle.  It’s an AMF throttle control handle.  I assume it came with a throttled Wen-Mac P-26 Peashooter.  He just said, “Take it.”

Other handles he gave me are two SIG handles, a home-made mini Hotrock, a Wen-Mac handle, some kind of fiber handle, a North Pacific Redy-Reel (I really want to try this one), and two of the ten Skylon reels. 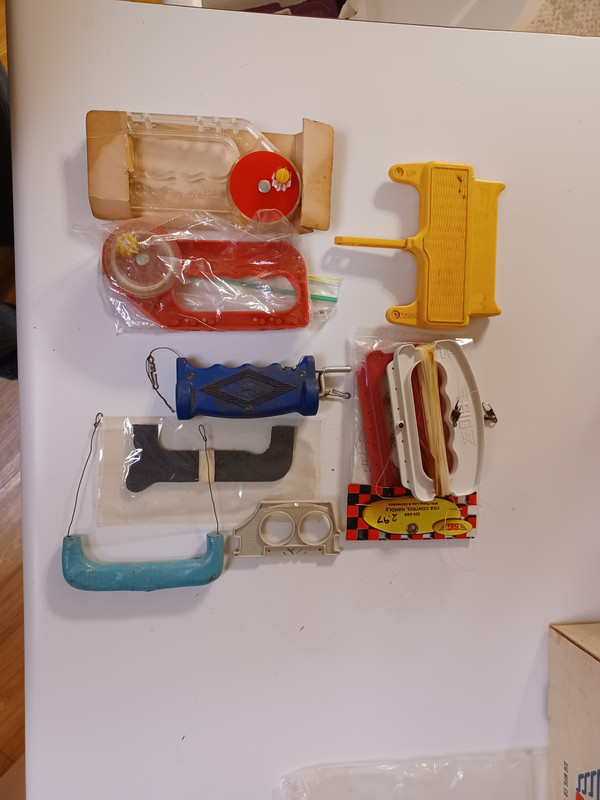 He gave me not just one, but several glow head clips.  I especially want to try one particular clip that I’d never seen before, and have no idea what engine it was made for, if for a specific engine line. 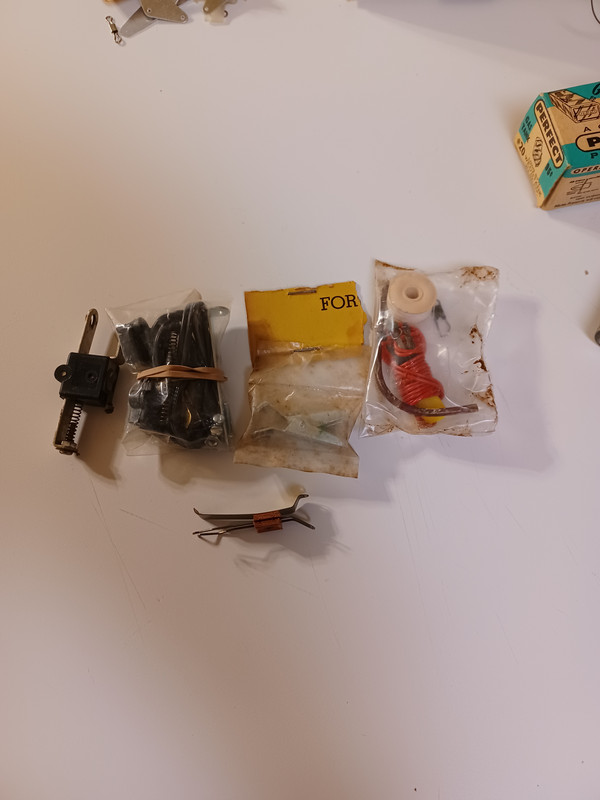 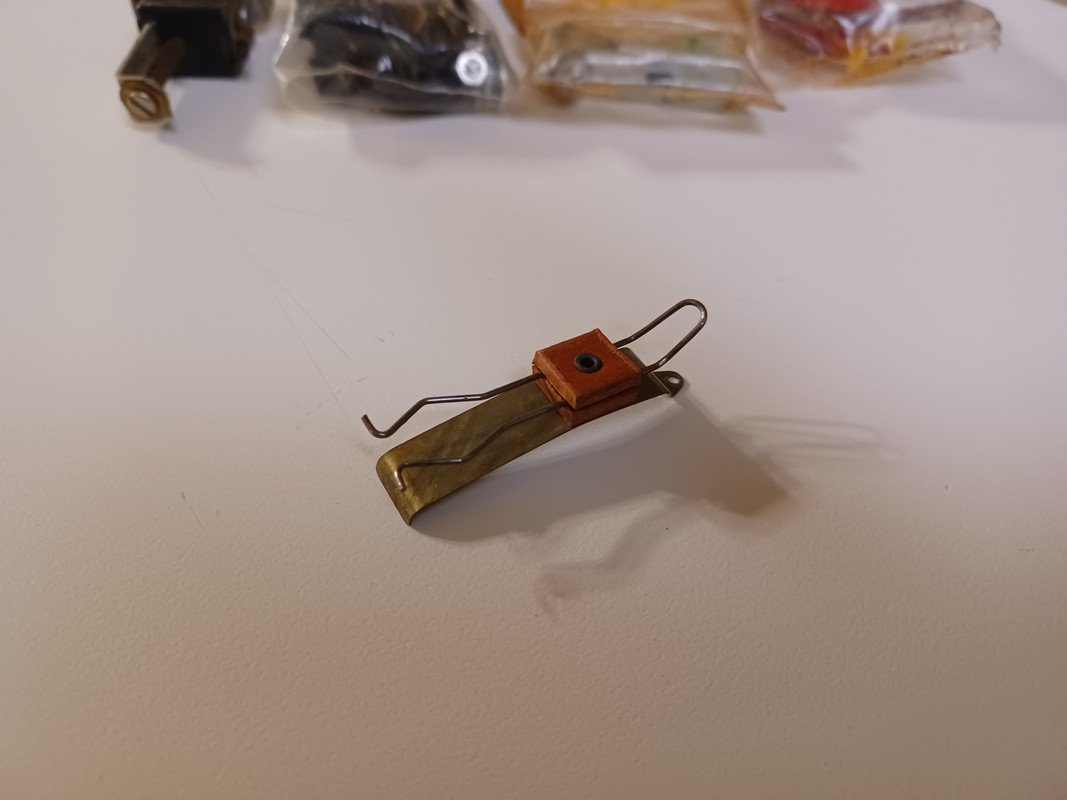 Wrenches?  You can never have enough wrenches.  Seven Cox .049 wenches, a Testors wrench, a Gilbert wrench, and a generic Perfect wrench. 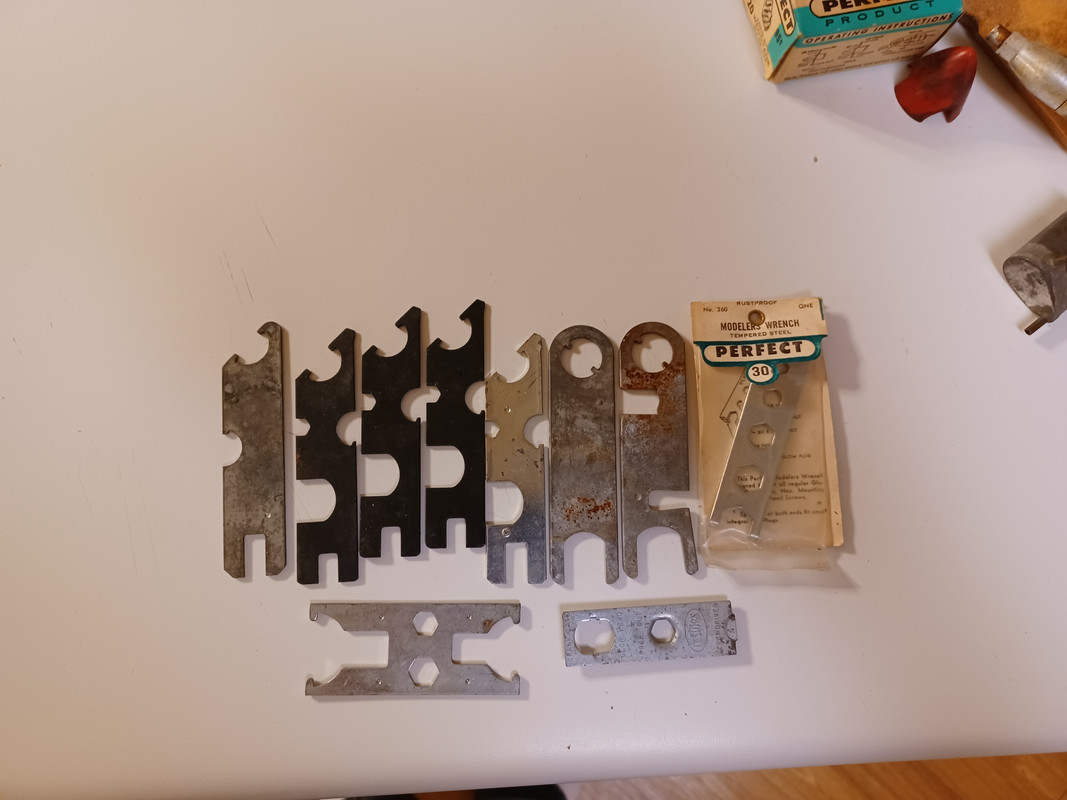 I also needed bellcranks and leadout material for the planes I’ve been cutting on the Cricut, so he threw in plenty of bellcranks.  The four tiny ones in the lower left should be great for .010 and .020 models. 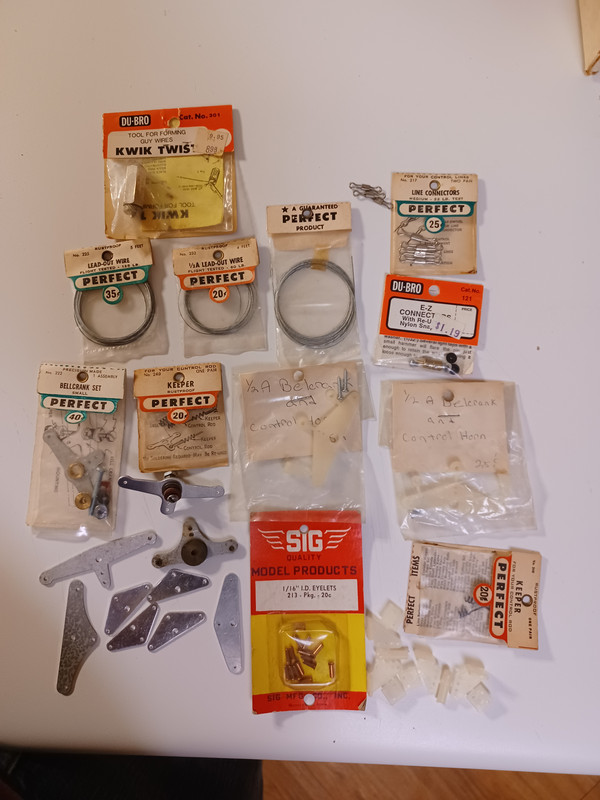 He also threw in some engines.  For non-Cox engines, there are five Testors engines in various states of completion.  A never run OK Cub .049, a never run BigMig .049 R/C engine, and a new never run Wasp .049 engine. 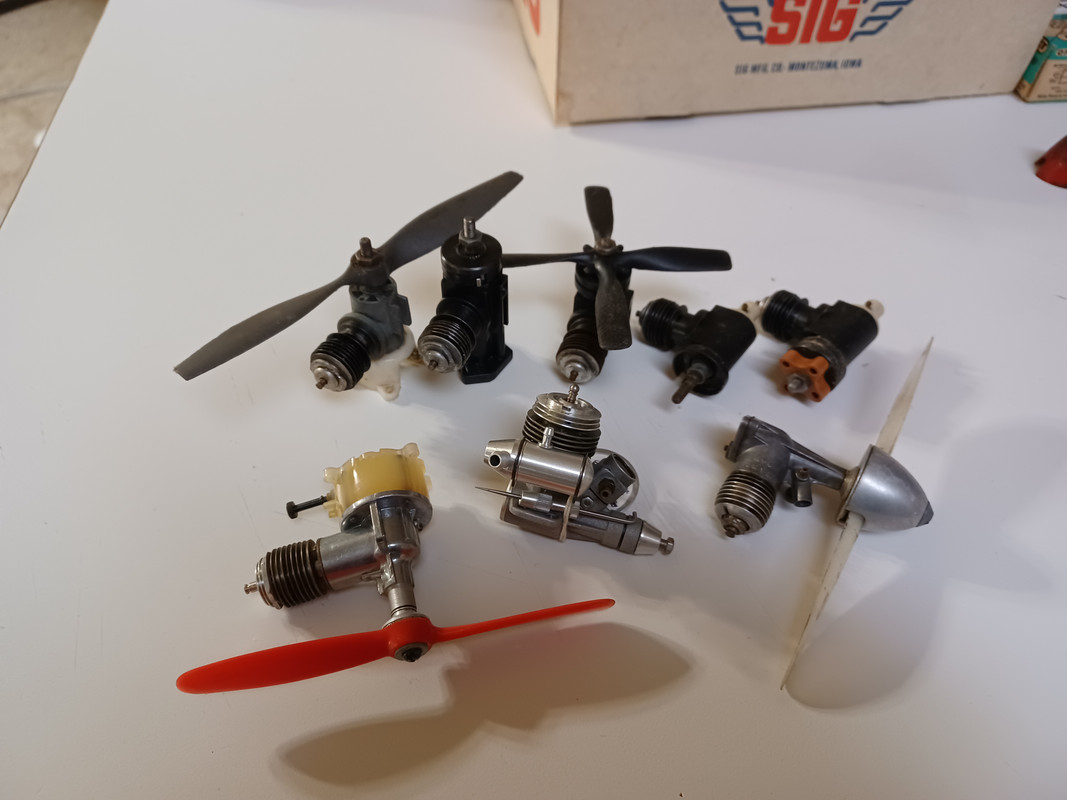 On the Cox engine front, he gave me a corroded Babe Bee, a pretty rough engine out of a car, an unloved postage stamp engine, and two, yes two, TD.09 R/C engines.  One had some really strange granulated residue, the other was just gunked up.  He said he bought them a few years ago to put in a model but never did anything with them. 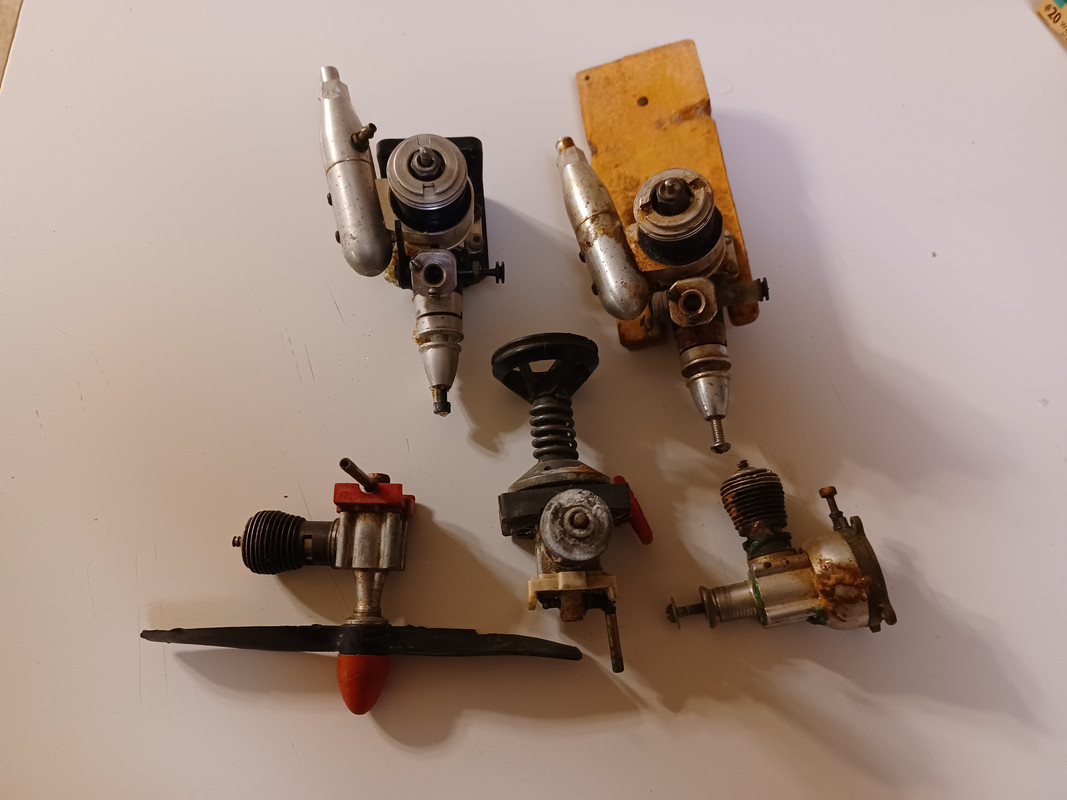 A few miscellaneous things also in the box are starter springs for a .020 and a .049, a spinner for a three bladed prop, a couple of wedge tanks, and a .8cc stunt tank conversion kit.  Also a fueling syringe and a new glow head for a Gilbert .07 engine.  Also, a new, never opened ½ pint can of Cox glow fuel.  Whaddaya think?  I’d say it’s still good so long as when I open the can I don’t find any rust. 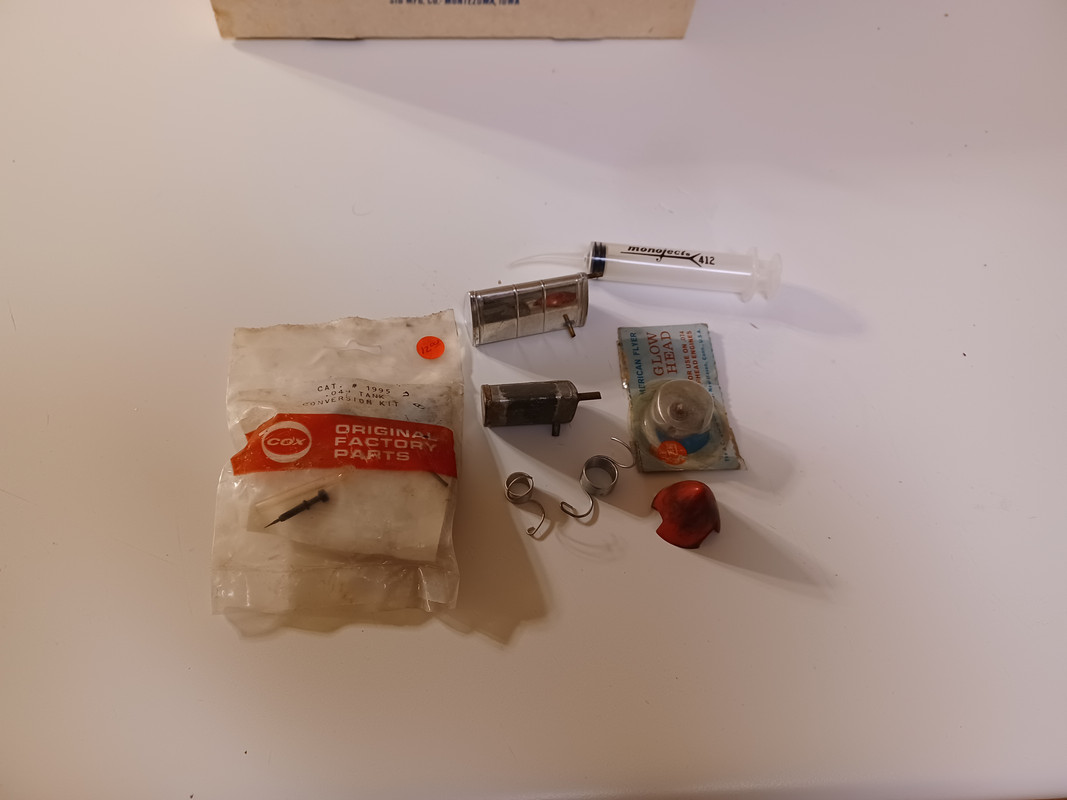 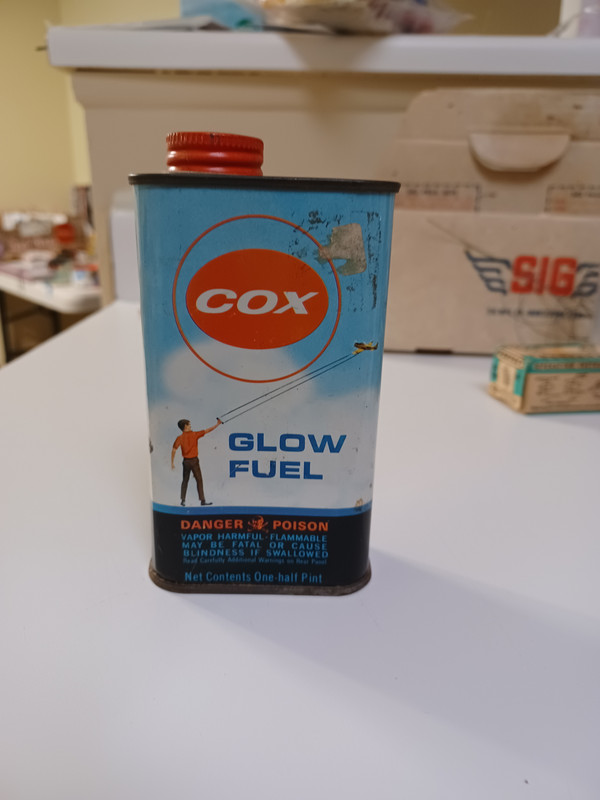 After we looked through the stuff in the garage, he took me to his den to show off other control line items.  As we were walking around, he said, “You like Cox items, you’ll probably like this.”  He reached down under an end table and brought out this box. 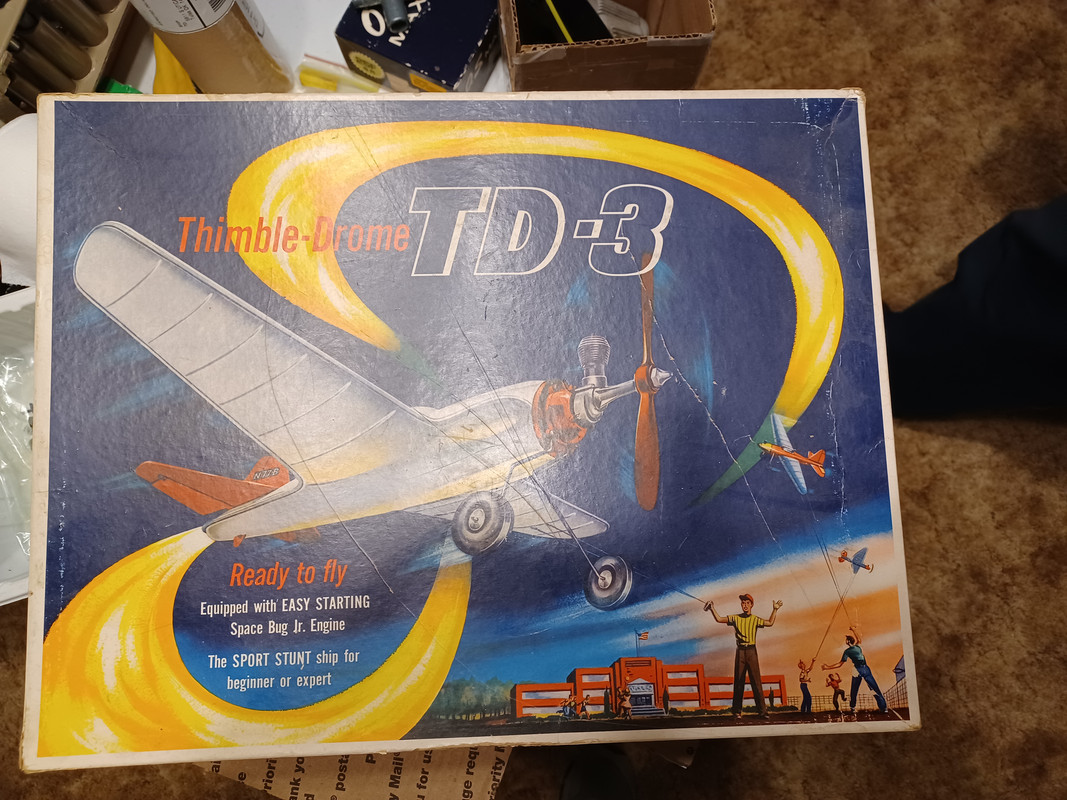 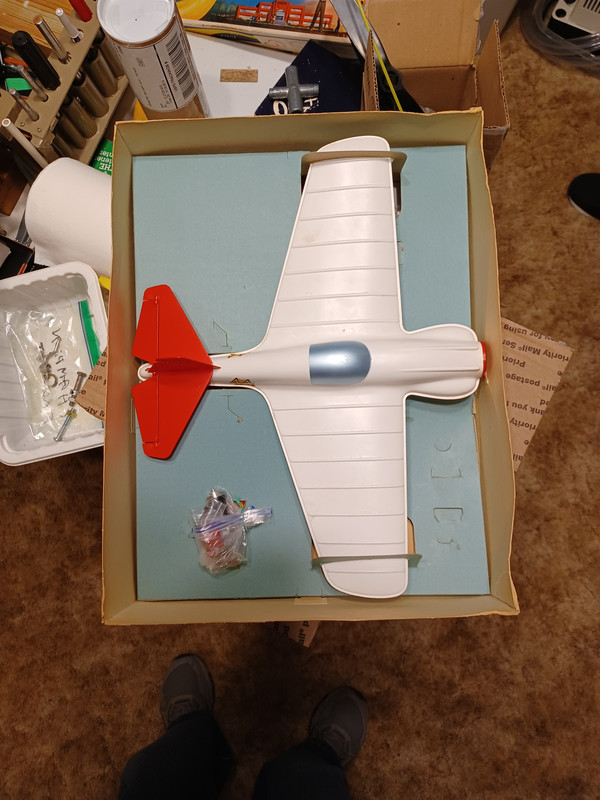 A 1953 Cox TD-3, new and never taken out of the box!  I was totally amazed. I also point out to him that where he’s leaving the box is just at claw height for their new cat, and that he should probably put it somewhere where the cat can’t claw it and ruin the box.

All in all, a pleasant afternoon.  I stayed and talked until I couldn’t stay any longer, since I am allergic to cats.

That is just AWESOME! ! totally rocks like hitting the SMALL Lottery. Now Ya gotta fly at the Spring Fling! That TD-3 does bring back memories!!

What a bonanza Mark! Those engines will keep you busy for some time to clean them up! And that near 70 years old TD-3!!!! I assume he did not want to part with that? 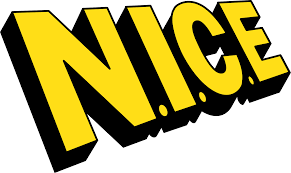 Wow Mark, and I was proud of my well used and tossed in with my Dauntless Thimble Drome handle.  And you have two plus others.  Yeah, my eyes popped when i saw that tub full of them.  I never realized that they came in so many different colors.

Nice score.  It's great to have friends and acquaintances.

And those grungy engines, pure gold.

That may be the nicest TD-3 I have ever seen.

AND...double YES for these going to a appreciative new owner!

This caught my eye while going through your pictures Mark. 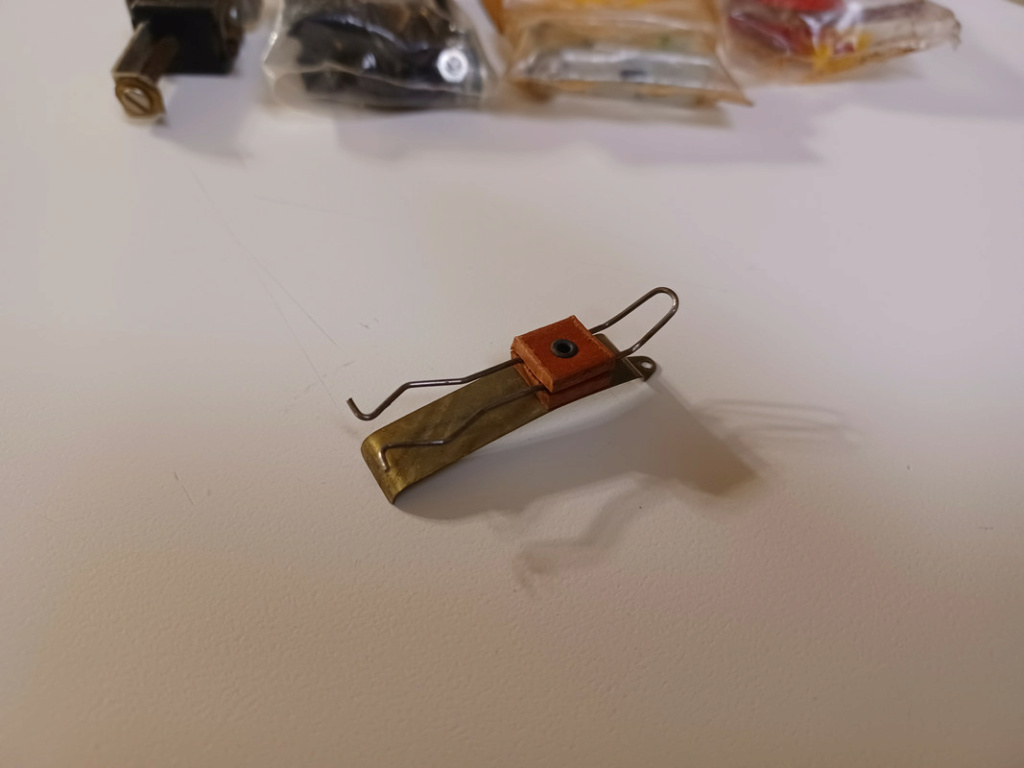 And I wondered what is was.  Then, I was on ebay looking for vintage glow plugs for my new to me K&B infants and found this: 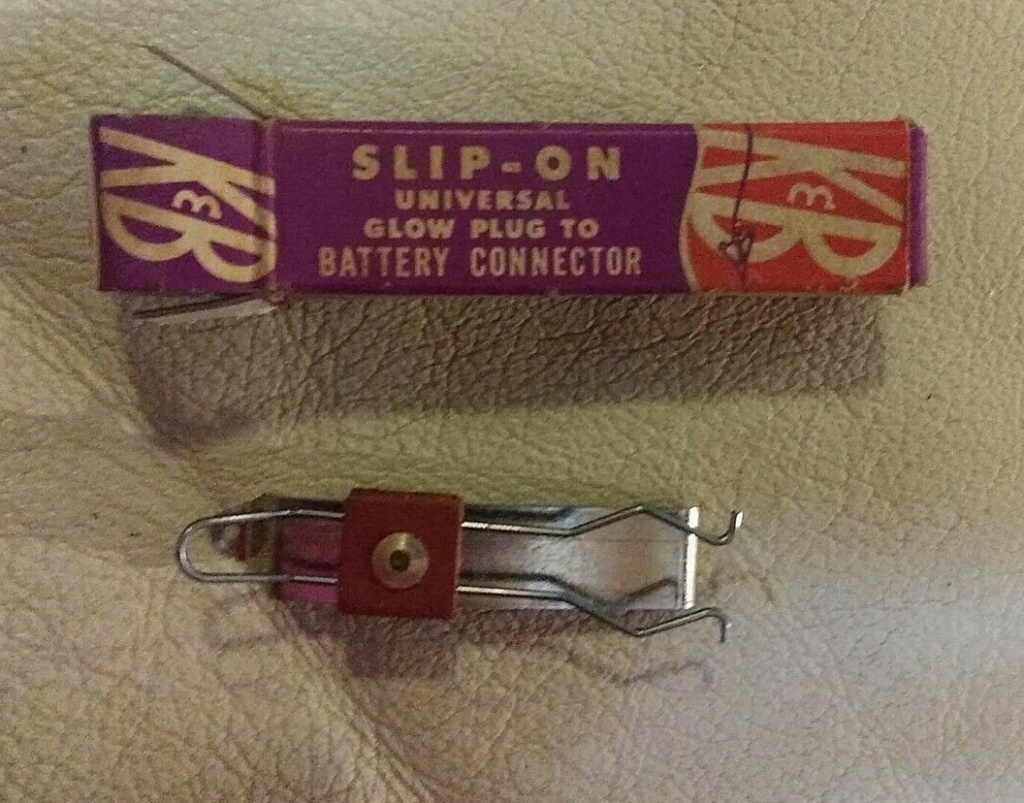 Well, I was waiting for the wife to get home, so I took a few minutes to do the first cleaning.  I took the AMF handle apart and cleaned it up.  A few minutes with some Dawn dish detergent and a toothbrush and it almost looks new. 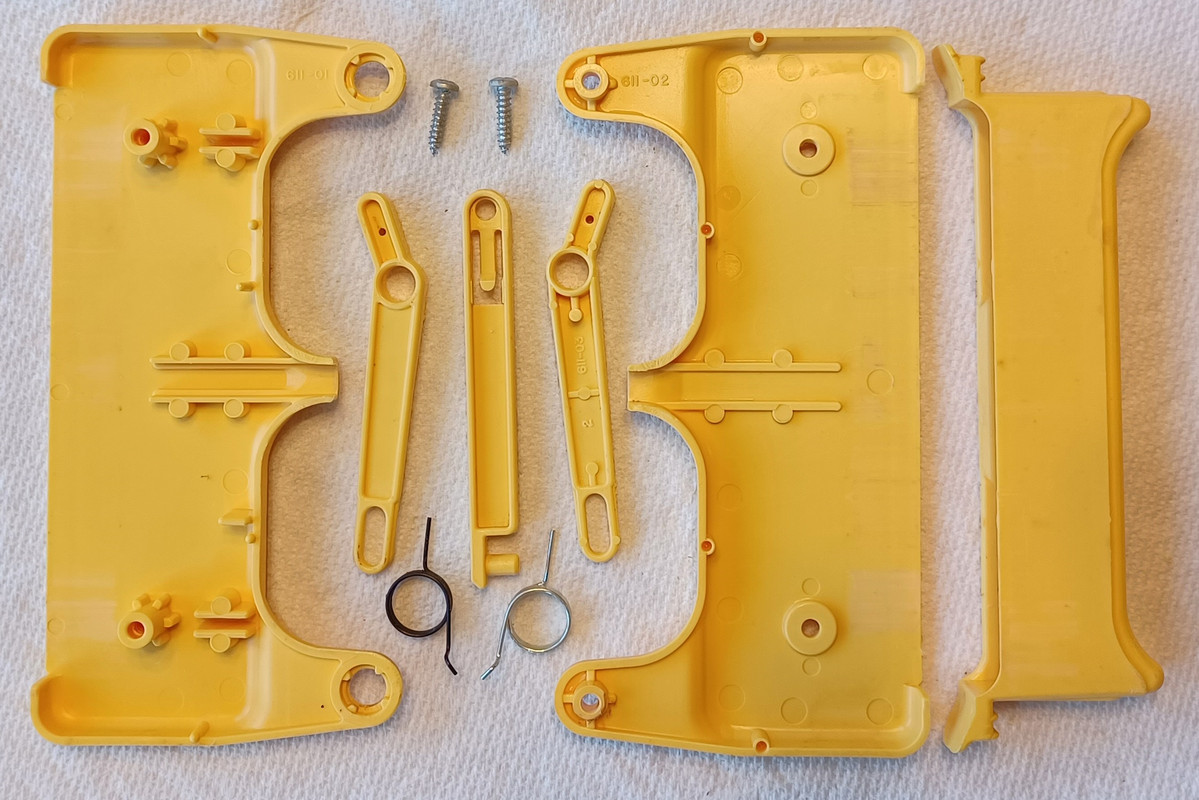 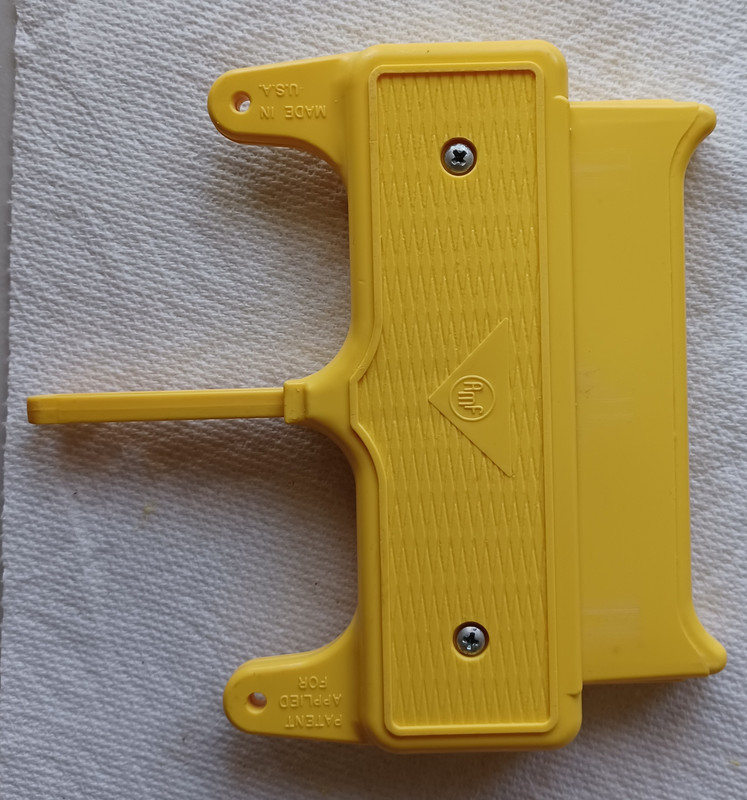 Okay.  Second thing cleaned.  Since the club president wanted me to use the Skylon reel this Friday, I went ahead and cleaned it.  It was gunked up with a few decades of glow fuel residue, so out came the toothbrush and Dawn again.  Came out pretty good.  But the inner reel had a broken tab, so I lose one of the detents.  But it’s no big deal.  I rewound this with 15# Spectra line.  I used yellow Spectra for the “Down” line and green for the “Up” line.  I’m looking forward to flying with this. 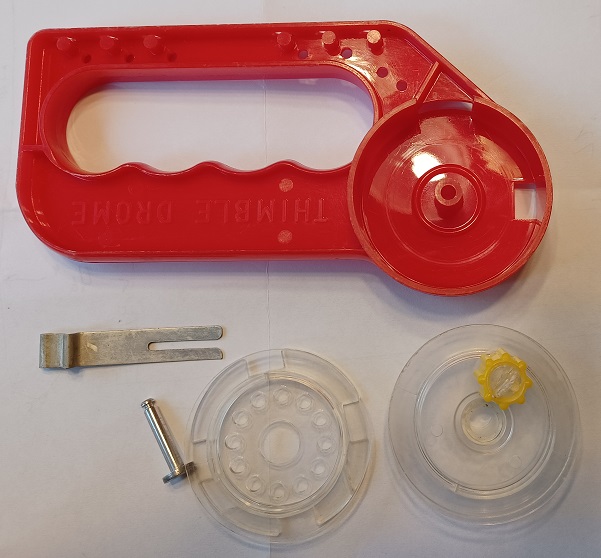 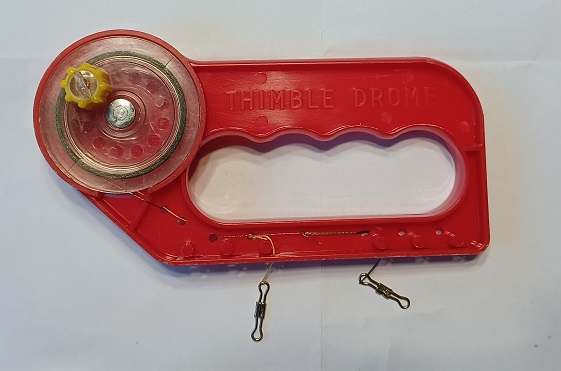 As an interesting aside, if you take the Skylon reel and a SIG 1/2A handle and compare them, you’ll see that the cutouts exactly match.  Looks like SIG copied the Skylon handle design, minus the reel. 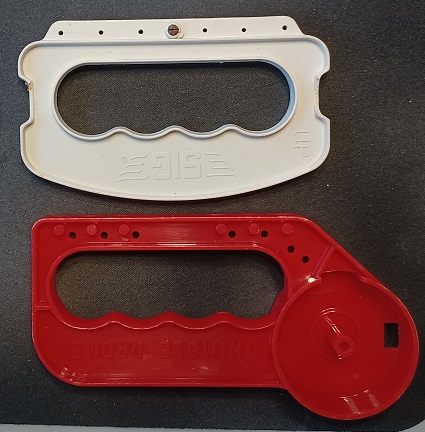 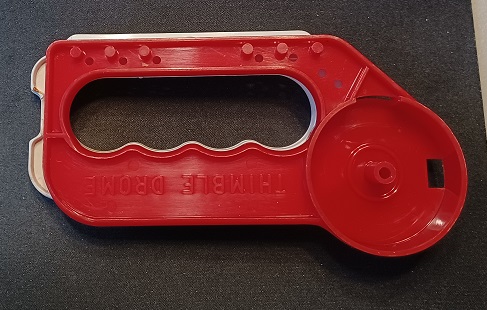 The AMF handle is interesting with them springs for the throttle , that would bee cool to use you have plans for it ?

I cleaned mine too Mark, but I didn't re-string it. It will live out it's days in the display case. I got that K&B battery/glow plug clip. Much smaller than I expected. 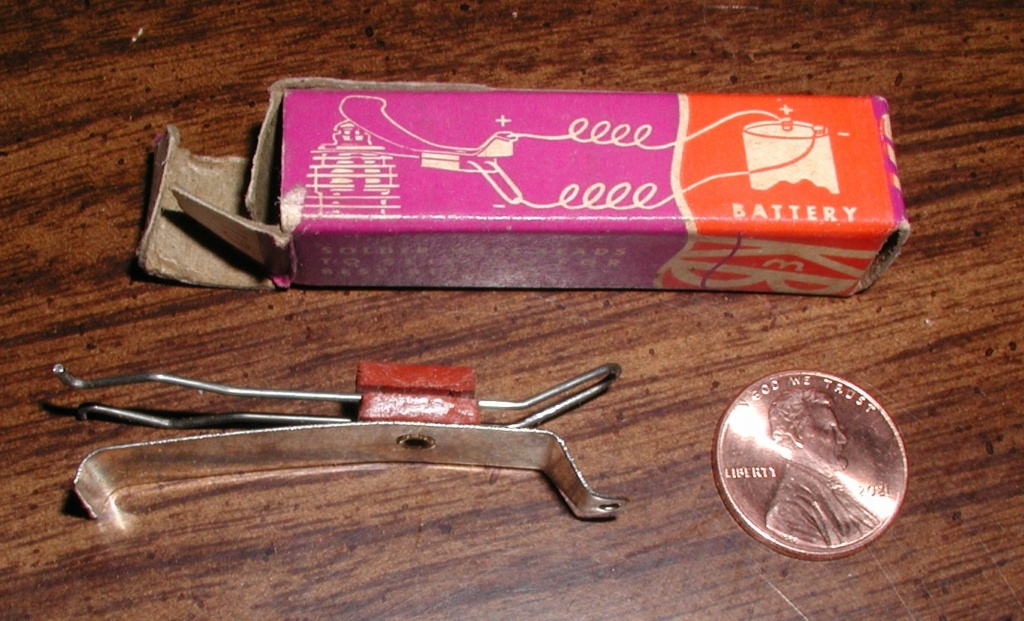 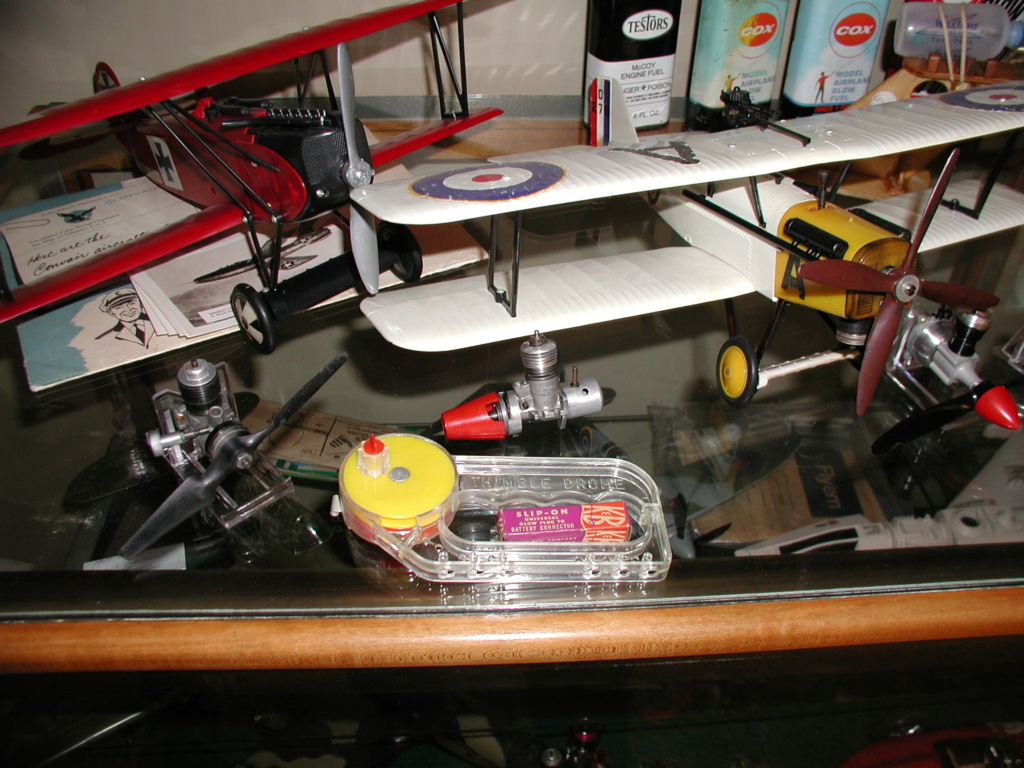 Bob, I do have a Skylon new in box that I will just leave alone. But a couple of working units should be fun. If I like this as much as I think, I might have to convince the club president to let me have a couple more. No sense in having all those handles just sitting in the box in the dark... I like to have one handle per model, instead of swapping handles between models and having to re-trim each time. Although, if it works as planned, re-trimming with the Skylon should be a snap. And it's just cool to fly with old stuff that makes the other club fellers eyes pop.

I had to make up a battery and clip for tomorrow. I ordered some D cell holders on Amazon for 2 day delivery. To test the clip, I needed a glow head, so I grabbed the corroded Babe Bee and pulled the glow head to see if it glowed when hooked up. It glowed, but looked funny, so I took a closer look. It has the "W" filament in it. This is an old Babe Bee...

batjac wrote:I had to make up a battery and clip for tomorrow.  I ordered some D cell holders on Amazon for 2 day delivery.  To test the clip, I needed a glow head, so I grabbed the corroded Babe Bee and pulled the glow head to see if it glowed when hooked up.  It glowed, but looked funny, so I took a closer look.  It has the "W" filament in it.  This is an old Babe Bee...

Nice find Mark, I always look for them. Got a couple stashed away.

rsv1cox wrote:
Nice find Mark, I always look for them.  Got a couple stashed away.

This makes three for me. I've never tried flying one, I just put them aside when I find them. I may just see how this one works in flight.

I flew the '74' Fighter today. It was the hit of the day. I like flying with this Skylon. Makes trimming easy.