Log in
Search
Latest topics
» Couple Kittens followed me home..
by Mike1484 Today at 3:49 am

» Ace Littlest Stick
by HalfaDave Today at 3:19 am

» music vids.. some of your favorites
by HalfaDave Today at 12:02 am

» Got the modeling bug this past weekend
by Yabby Yesterday at 7:20 pm 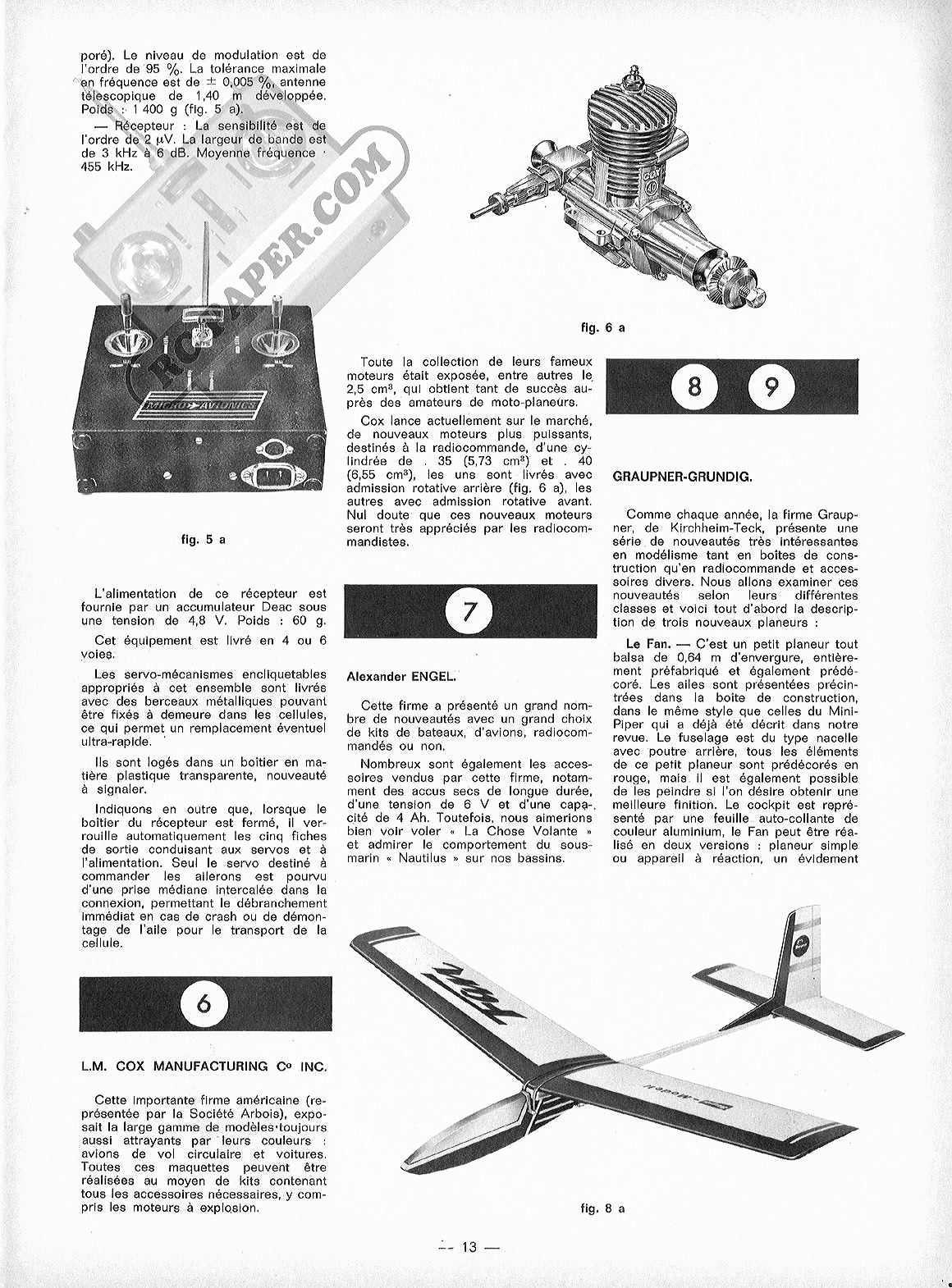 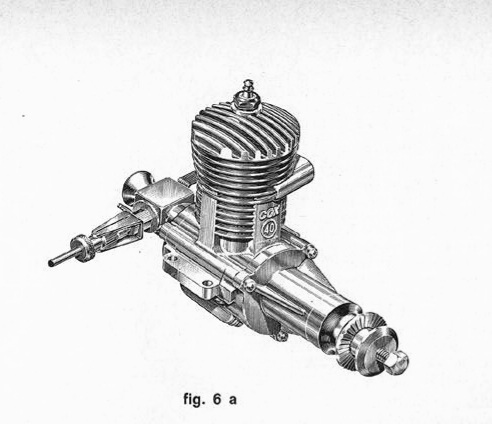 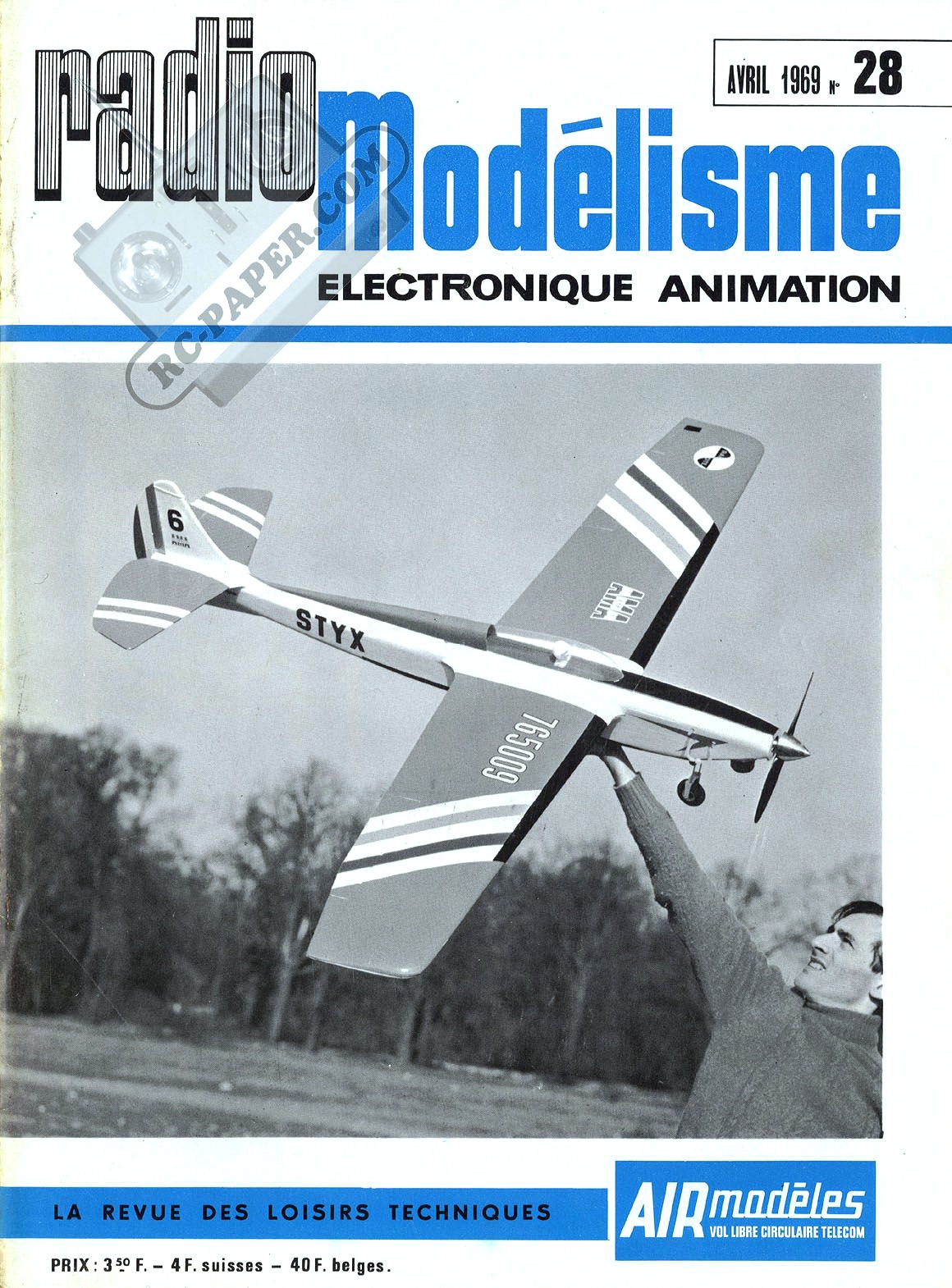 Ah the famous .40 with reed valve is a model that has never been in production I think I don't know if it has already been made as a prototype, probably Not

I already talked about this engine But not find much

A catalogue page sent by crankbndr: 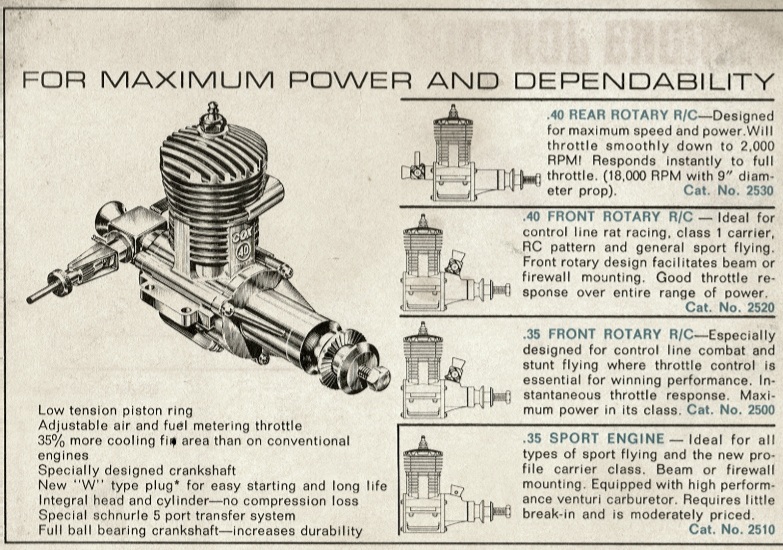 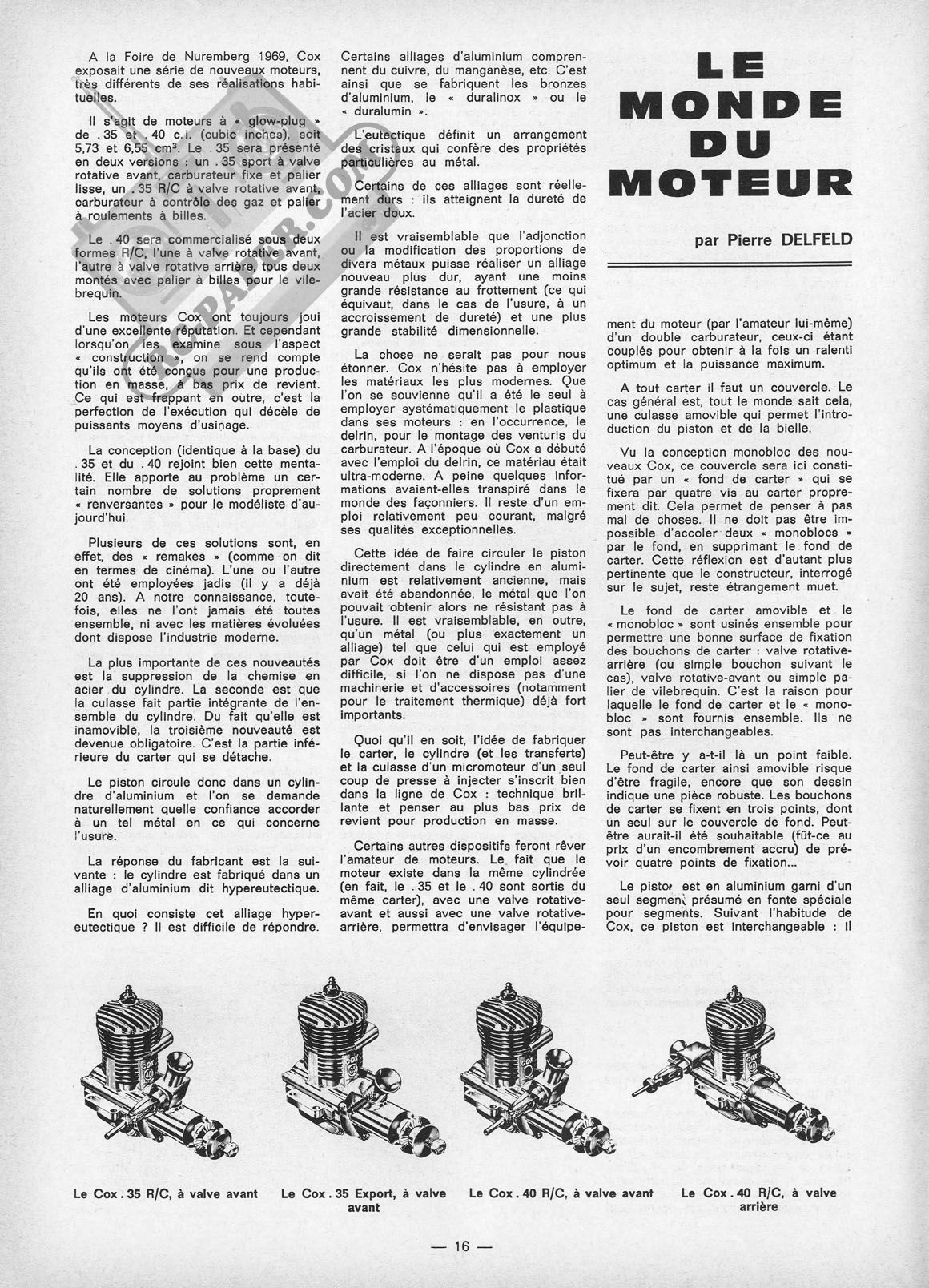 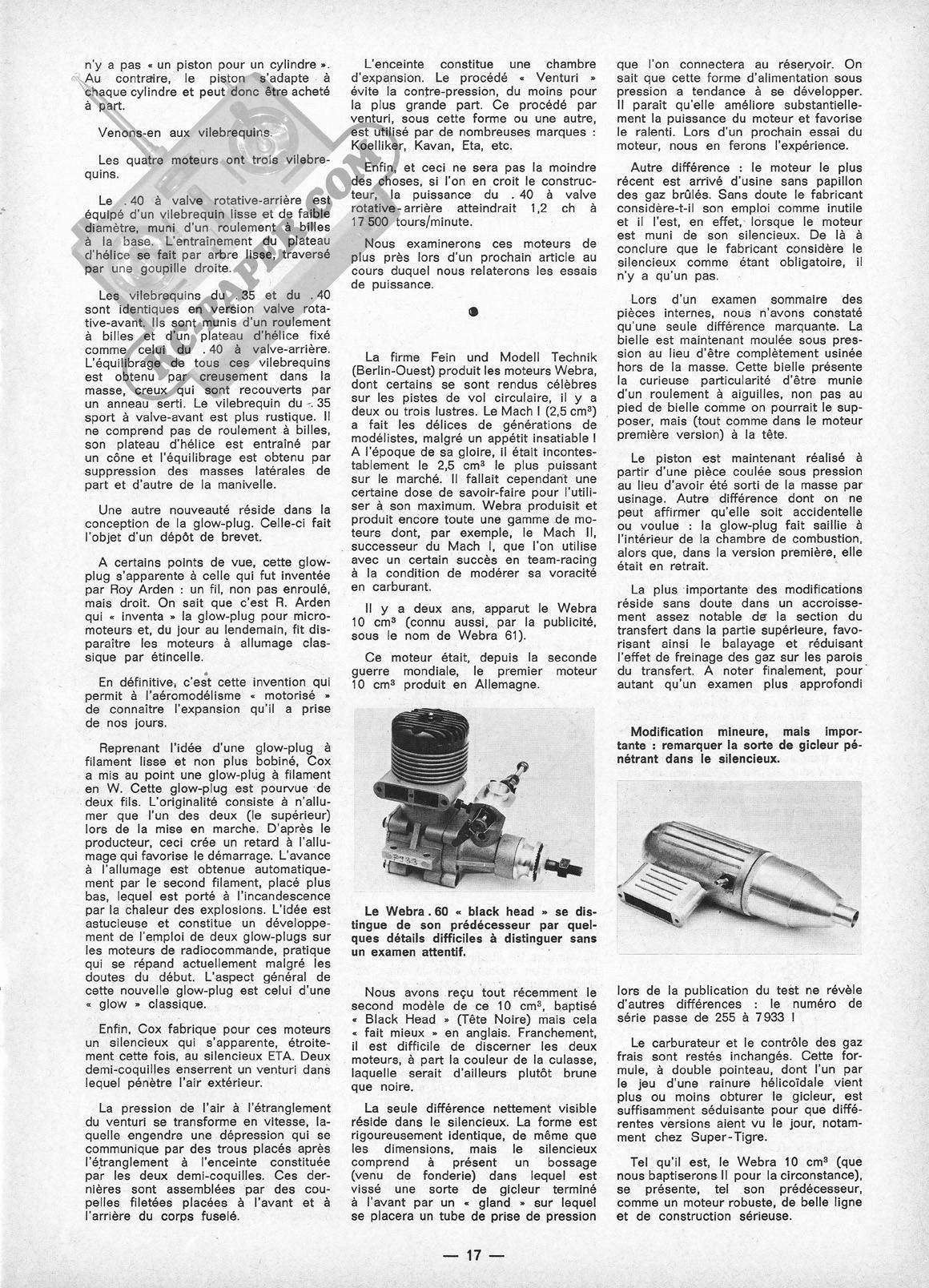 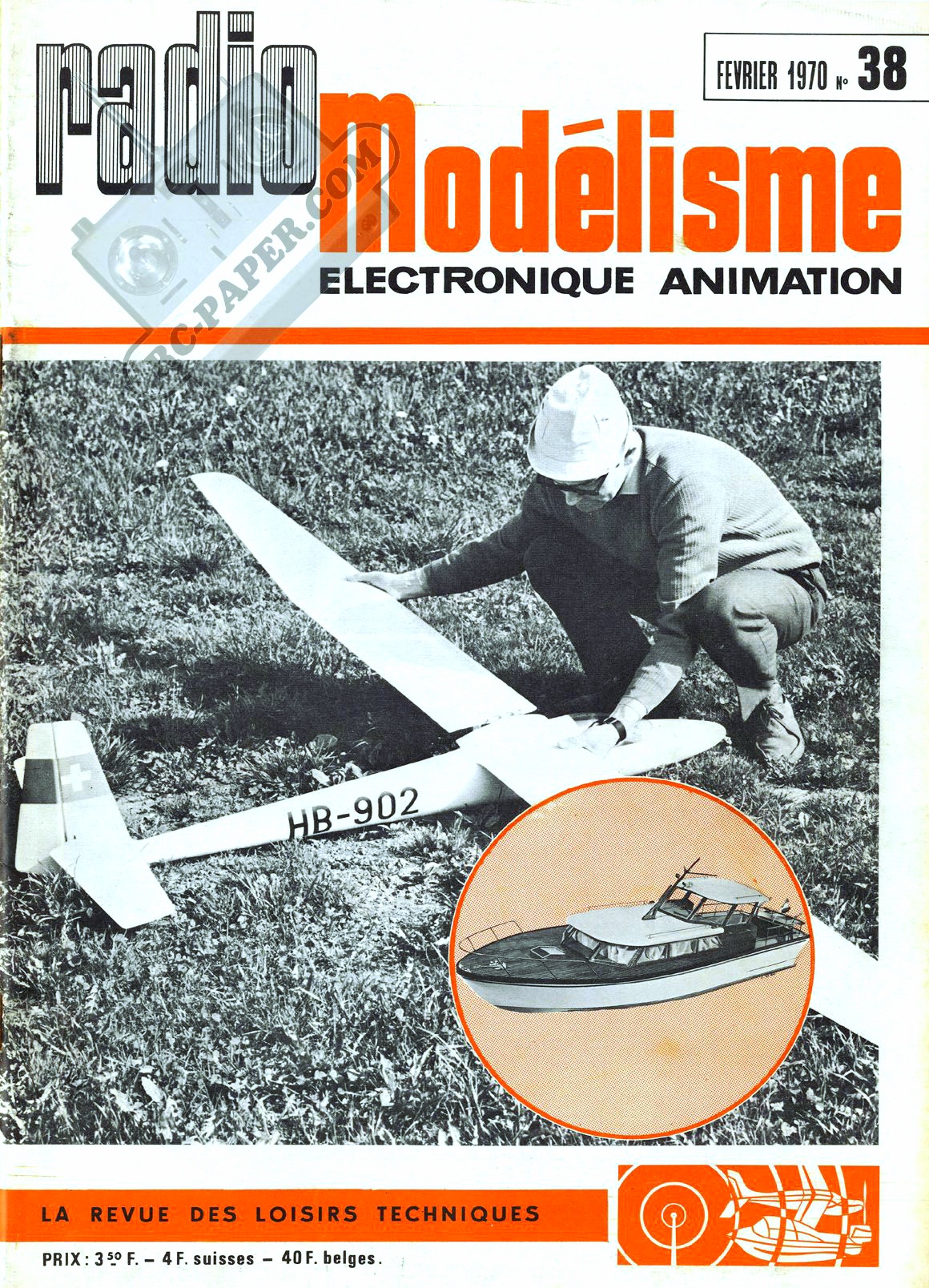 A text from image translation about Cox .40 rotary valve:

The 40 with rotary-rear valve is equipped with a smooth crankshaft and low diameter, fitted with a ball bearing at the base. The training of the board of propeller is done by smooth shaft, crossed by a straight pin. The crankshafts of the 35 and the .40 are identical in the rotary valve version.They have bearings and a fixed propeller plate like that of the 40 with valve-back. Balancing all those crankshafts is obtained by digging in the mass, hollows which are covered by a crimped ring. The crankshaft of. 35 valve-front sport is more rustic. It does not include ball bearings, its propeller plate is driven by a cone and balancing is achieved by removal of side masses from either side of the crank.
Another novelty is the glow-plug design. This one does the subject of a patent application.
From certain points of view, this glow-plug is similar to the one that was invented by Roy Arden: a thread, not coiled, but straight. We know it's R. Arden who invented the glow-plug for micro engines. Ultimately, it is this invention that allowed motorized model aircraft
to know the expansion it has taken nowadays. Taking up the idea of ​​a glow-plug to smooth and no longer wound filament, Cox has developed a filament glow-plug in W shape. According to the producer, this creates a delay at the ignition that promotes the start.
Finally, Cox manufactures for these engines a muffler akin, closement this time, to the ETA muffler.

This remains an interesting article and moreover all written in French: Thumbs UP: The motor described in this article is very interesting it's a shame not to have a motor As described plus wit a ring on piston if it exists it must have very little made because I have never seen one

I don't know if this is true, but just reading between the lines, Leroy Cox was a visionary. The new Cox Conquest Schneurle line came out at a time that Schneurles were being introduced. He was seeing the ahead, the shrinking control line market along the half-A's, wanting to make Cox tops in the model airplane engine market.

But the slot car market crash several years prior left him with a tremendous unsold inventory of Cox slot car systems. Facing bankruptcy, he sold his company.

The new owners did not see a need for the new line of engines, kept Cox within its legacy engines, only permitting derivatives. (I saw this happen in aerospace to Douglas Aircraft Company). Thus started the eventual decline of Cox.

The .40 rear rotor market was booming starting a few years earlier. Super Tiger and especially K&B was dominating that market. I would find it incredibly difficult to believe Cox could produce a engine for that market which was already filled. K&B rear rotor .40's are darn near indestructible, they're simple as can be, powerful and were inexpensive.

Well the ones shown were the 'Concept-II' series in 35 and 40 displacements-which never made it into series production-this was of course 1969-so for the time they would have been revolutionary in their design and metallurgy. I would not be surprised if some of the design ideas influenced K&B a decade later in their development of the Sportster series.

Cox did not entirely give up on the idea-in the mid to late 70s they developed the Conquest 40....which as its name suggests-was a 40 sized derivative of the 1976 Conquest 15 engine....and the family resemblance is unmistakeable. Once again, this failed to make it into series production-though a few working prototype-pre production examples were produced-I have heard the figure of 8 examples mentioned anecdotally....some of which were actually used in anger-by people such as Doug Galbreath....nowadays any that survive reside in collections....

Ken Cook wrote:The .40 rear rotor market was booming starting a few years earlier.  Super Tiger and especially K&B was dominating that market. I would find it incredibly difficult to believe Cox could produce a engine for that market which was already filled. K&B rear rotor .40's are darn near indestructible, they're simple as can be, powerful and were inexpensive.

Ken, I think you hit the nail on the head for what makes for a popular engine: powerful, durable, and reasonably inexpensive.

What I was referring to was an even bigger picture, that ffkiwi alludes to. That is the whole encompassing line up. Perhaps there would have been a new series of half-A's to augment and may be replace some of the legacy ones, carrying on the Cox tradition.

These engines were developed, they were mature enough to be successfully marketed, but I gather the new company owners didn't want to take any risks at all. This is why Cox was still making their legacy engines with dated technology, when others like NorVel came on the scene with their Schneurle ported half-A's with ABC / ABN technology. Cox were still good engines, yes, but 40 year old technology.

If they had chance to enter mass manufacturing and sales to the public, I could foresee toned down versions, basically "Medallions" for sport flyer use. And, even greater development to compete in the competition world would be forthcoming.

But, alas, now these engines are history to be shared and cherished on CEF. 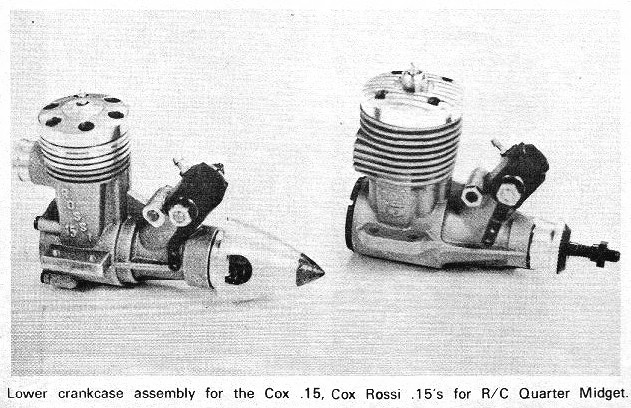 June 1976 Model Builder Magazine wrote:A series of runs was made on the test car after the engine was broken in. We used a series of readily-available props, such as the Cox gray plastic 8x4, Rev-Up 7x4, 7x4-1/2, and 7x5 normal and widebladed props. The Cox gray plastic 7x3 is specifically NOT RECOMMENDED for the Cox 15, as too many of them came apart under testing at the Cox factory.

Fuels used were: Cox Glow Power, Cox Racing, and Fox 40-40. With fuels any higher in nitro content than the Cox Glow Power (15%), it is mandatory that two head gaskets be used. Otherwise the glow plugs will burn out after about thirty seconds of running. With the Fox 40-40, which is 40% nitro, two .005 cylinder gaskets, AND two head gaskets were necessary to keep the plug from going away!

We got the best results by running a Cox gray plastic 8x4, cut down to 7-1/2x4, and Cox racing fuel. The other props gave a lot more RPM, but didn't haul the car nearly so fast, or accelerate nearly as well. This bears out what has been said before, that the Cox 15 seems to be a higher-torque engine than the imports, and will not need the high RPM and resulting wear and tear, in order to be competitive.

In Summary: This is NOT the engine for the "Average" modeller. It is a highly-tuned piece of performance equipment, and if operated within the parameters for which it was designed, will give outstanding service. For the high-nitro fans, put them-there head gaskets under the head, or the plug won't last for one run! The biggest market for this motor will probably be in the R/C Quarter-Midget circles, where the high-torque output and power curves will match the props these fliers are accustomed to using.

Apparently the engine was still being sold as Peter Chinn wrote about the R/C version in June 1997 Aeromodeller Magazine, calling it the most powerful engine to date. It's higher torque has merit that adds a sense of superiority over the other offerings. It is unfortunate that the larger engines never made it to market. We might have seen even greater stories in the modelling circles about Cox engines.

That is the first time I have seen the 1969 Cox .40. Too bad it was not released after going to all the trouble of making the casting molds and the development as well as the Conquest .40. The Conquest .15 is my favourite Cox and the Rossi and the other copies are right up there too. I try to scoop them up whenever I can if the price is OK. There are also Taipan gold heads, MDS/Ucktkam and MVVS that copied the Rossi. The Cox was sold at a very reasonable price at the time. I flew my Conquest last year on an old F2D combat from the day. I remember the guys at Woodvale England at the world champs in 1978 with that exact plane. And many more. They were numbered.