The hondas and other of the time were excellent bikes. the Bol dor 900 was the best bike I vere rode and not win lots of races in its time. It just didnt quite have the power and was up against the CB1100R! and although it handling was incredible, it had a minor weakness in the left side crankcase was easy to scrape when cornering and it was a bad moment when it ground all the way through. Lol.

I had two street bikes. A plain run of the mill, evil handling GSX 750 that when I rode in the hills, I had to ride it as if it was a wet day to keep the jigger upright when dicing with others, and I had a vey illegal Yamaha LC/RD 250 that I put F Model TZ 350 Barrels, Pistons, head, TZ 350 ignition, (which meant I had to push start it lol. stands were off of it, no kickstarter, )Mikuni Power Jet Carbs, and the TZ 350 F model exhausts/chambers. I de-tuned it as much as I could as my old race pistons and rings went in it and it would destroy cranks very quickly. Lol. But when I rode it up in the hills it certainly opened some peoples eyes when I joined a dice with them and cracked the thing open coming out of a corner! Lol. Mind you on street tyres it was a bit dodgey and wanted to wheel spin all the time. :-)

Below is one of my old TZ Jiggers I was racing at Mcnamara Park in south Australia. That bike when the photo was taken had a handgrenade qualifying motor in it, that came out that night and a race motor went in. The handgrenade motor had extra ports cut into the cylinder wall lining from the inlet going up toward the combustion chamber and then had to be re-chromed. It ran much bigger carbs, and was tuned/plugged chopped (barometer/Temp/ algorithym then to slect main and powe rjet) till we were detonating the piston head and cylinder head. The piston skirts were cut and the windows in the pisons were modified from normal TZ spec. It made power from 10,500 to 12,500 and if you were down at 9,000 rpm and cracked the throttle it would oil the plugs. so it was either braking or accelerating. 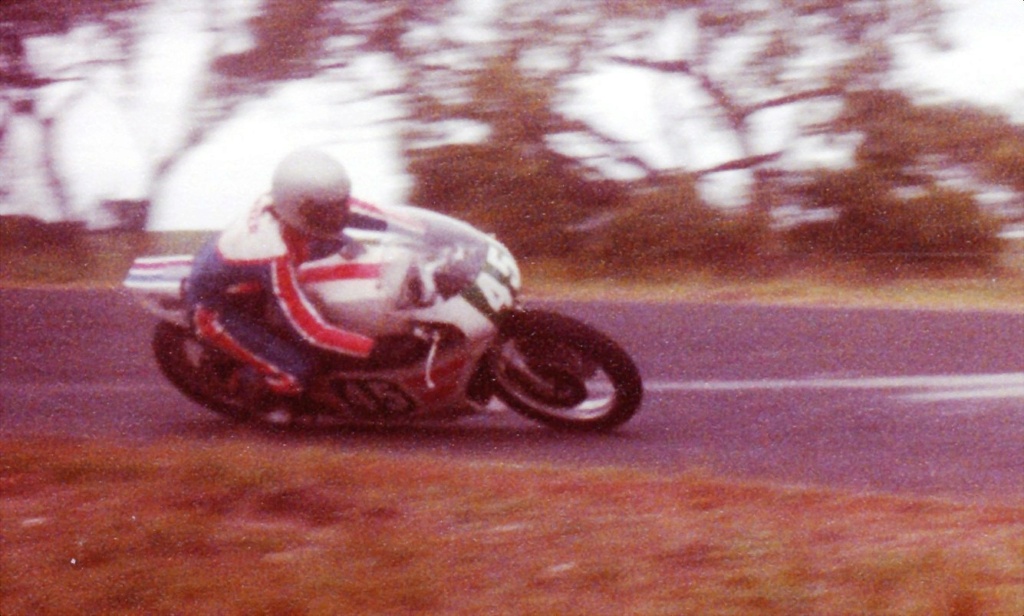 A great time of my life! That I sadly miss. but at least I had that time. And now I enjoy heaps playing and doing stuff with my cox engines! cheers cheers I used to fly cox and enya before I started racing. a lot of fellas I knew in racing also flew CL. Seens to be a bit of a connection there.

Latest J model Behind me int the pits

The photo below is not the best, but it tells a story. Lol. the bike behind me (Not mine) is a TZ J model straight from the Factory. The crates had arrived two week prior and the bike had been shacken down and setup a week before this meeting at Adelaide International Raceway. shakedown and setup had been facilitated by two Yamaha Factory Works engineers coming over to help them get it right. competing against these, and later the K and L models on my D model chassis, with F model engine made for interesting times. Lol. The tyres in the front corner of my trailer were some slicks they had finished with and gave me. Nothing like racing against a J model on your old D model frame and F model engine, using the slicks they gave you because they reckoned they had gone off. HaHaHa. That is how I learnt to go into very fast corners open and as the front end started to slide I would start to spin the backend to steer the sliding front end. The method of doing that became more common when radial slicks became available but on crossply slicks was very very dicey thing to be having to do. And trtaction control wasnt hear of in those days!!! Traction control was in your throttle hand! :-) 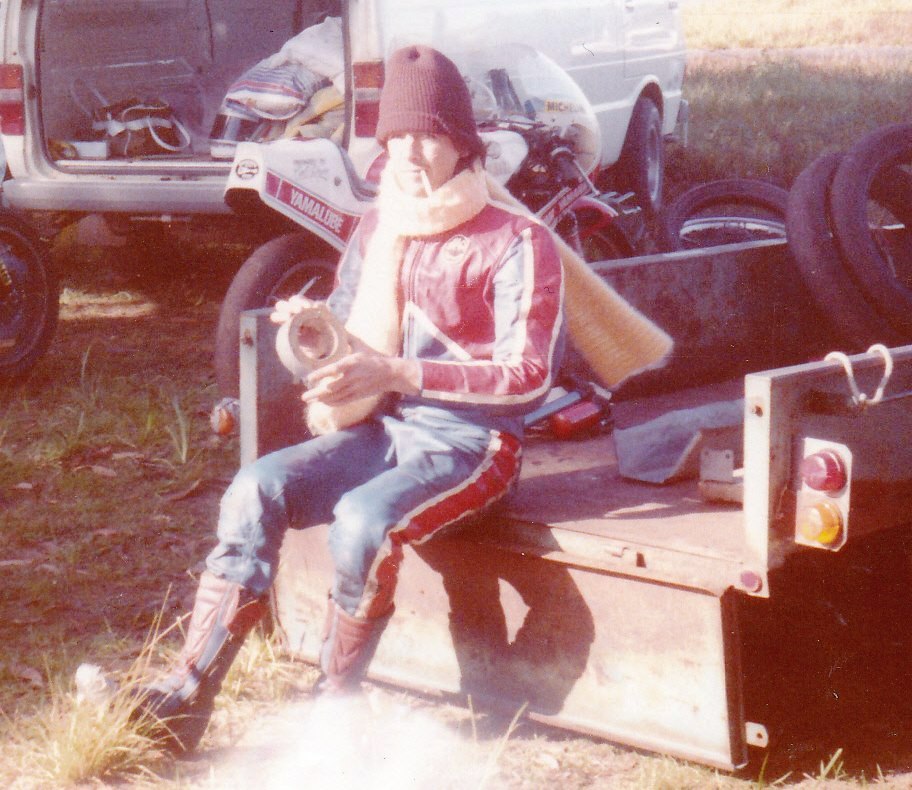 The big roll of Duct tape in my hand is about to be applied to my right racing boot. I had a beutiful set of tailor made Rossi soft leather racing boots that I loved. the problem was I had ground a hole through the little toe part on each boot as I used to scrape my rear set pegs and at times in huge powered slides the exhaust headers would scrape as the front wheel folded under, which was a point at which I became bothered. Lol. I used the tip of my boots as an indicator of how far before the headers started scraping. I used to cut up coke cans and wrap around them and then duck tape them up before every race. worked perfectly. but the scrutineers gave me a really bad time over them regularly and it got very animated at times. eventually my dad ended up taking everything through scruteneering for me, which seemed to work better for all concerned. Lol. I had a massive argument with them which they never got over, as they were making a big deal about these little holes in my boots that might result in my toe nails getting trimed. They has put a passed sticker on my bike, and I went off, as the bike had a dummy back wheel in it, missing many spokes, with an old street tyre that was flat and the axle wasnt done up tight and it didnt have a chain on it. It was just there to hold the bike in the gutter on the trailer as I didnt like putting my race wheels in the trailer gutter. I expressed my disbelief at their stupidity in passing the bike, yet hassling me over the little hole. Anyway, dad heard and saw all the noise going on and sent me off and sorted it out. Lol. Scrutineers!!! Man drove me mental, but, that said, they were voluteers and without them I didnt get to race, just like flag marshals..... etc. but I refused to appologise over that incident. It was just one too far. I kept using duct tape on my boots all through my racing career and stewards and scrutineers around Australia new about it, and ended up just laughing, seeing the joke that they are my toes, and let it go. I needed a Duct tape sponsor. Lol.

Ive ridden all sorts of modern and old bikes, street bikes, race bikes...... but to me nothing beats being on a piston ported TZ exiting a corner cranked over hard,crack the throttle and the jigger starts wheelstanding whilst your still cranked over. Piston ported TZ engines were the real deal!! reed valve TZs were much calmer things. riding them in the rain was always exciting.

The factorys and association brought the two stroke grand prix erea to a close due to declining grids. That wasnt a money issue, or bike availability issue, or the factories wanting out, the things had become so insanely powerful, with such brutal near uncontrollable power bands, that they struggled to get people who could actually ride them and stay on them two times in a row, and maybe go fast as well. Its a shame. But, I think its a decision that probably saved many lives. Riders regularly died racing these jiggers in the 70s and 80s, and after that erea things improved in that respect.