» Couple Kittens followed me home..
by Michpatriot Today at 20:16

» Got the modeling bug this past weekend
by roddie Today at 18:57

» My Mazda RX-7GSL-SE build log with the occasional balsa inclusion
by rsv1cox Today at 18:20

» How's the weather?
by GallopingGhostler Today at 17:38

Amazing all the abuse this engine took going several thousand miles of riding whilst touring Europe:

Thanks George for posting this epic endurance ride of the small Honda, sometimes with no oil pump running.

I have a Honda Grom with the same type of 4 stroke aircooled inclined cylinder, but 125ccm swept volume. I have near 20k km on the ODO but have never seen this legendary Honda engine fail. Only regular oil changes and no other service is needed.

Some Grom users reported on youtube that the engine still works perfect after 70k+ miles of abuse..

I love these accounts of how durable an engine is..(may be a loner because my thread on COX engine longevity started last weekend was left unanswered by CEF members except for David..

That is a remarkable little engine! Millions were made in one variant or another, and is a popular base for a bike in Thailand. There was a company named TRAC in the early-mid 80s building a bike that appeared to be a Honda CB-F, complete with duckbill rear seat cowl and a coffin tank. When I finally saw one up close, it had a 100 cc version of my S-90. All of the "branded" parts appeared the same, except the area where the branding should be was either built-up, or obliterated such that no one could say it was a Honda. Even the stamped steel frame, spoke count, cable lengths were the same.

While there is a family resemblance across all the OHC horizontal Honda engines, there are some minor differences in key places. Engine mounts have different widths, so that sometimes requires some minor frame changes. Even the chinese pitbike engines have a lot of commonality with the little Honda engine. I'd love to park mine next to a Grom just to see how difficult it would be to graft the Grom engine into mine. It won't be tough to do, and I'd love to have an extra 40% in displacement and fuel injection!

I bought my S-90 well abused in 1983, before enlisting. A typical day had me thrashing the thing through the streets of Boston racing VW Rabbits and Sciroccos from light to light. That engine died of "Teenager Abuse" as my dad called it. Too many jack-rabbit starts wrung the clutch off the crankshaft, with the crank splitting just behind the splines. Another used engine bottom-end was found. So I unbolted the top end off mine, and dropped it on that other bottom end...even the gaskets were re-used. It ran again...and now I piece it back together again for my youngest son. The frame was powder coated this past summer, and a trade was made with a guy from Ohio for other sundry bits to complete a refresh. I'll be at 40 years with this bike next summer, and will enjoy it again soon enough!

Wow very cool bike shop reminds me of the place where I started as a mechanic at 17 Pieces al over on three different floors in the attic and there were two floors in the basement  first flor was show room wit the two big dors wit glas so he saw us working The place was like a second home for me for a while, the working atmosphere was great I didn't make a big salary but I learned a lot and it was worth more than the money And all the different mechanics including the boss who showed me so much he was almost like a father to me Honda brand have a special place in my life my dad raced in the honda series m'y first bike was a honda  xl 80 1979 it was indestructible 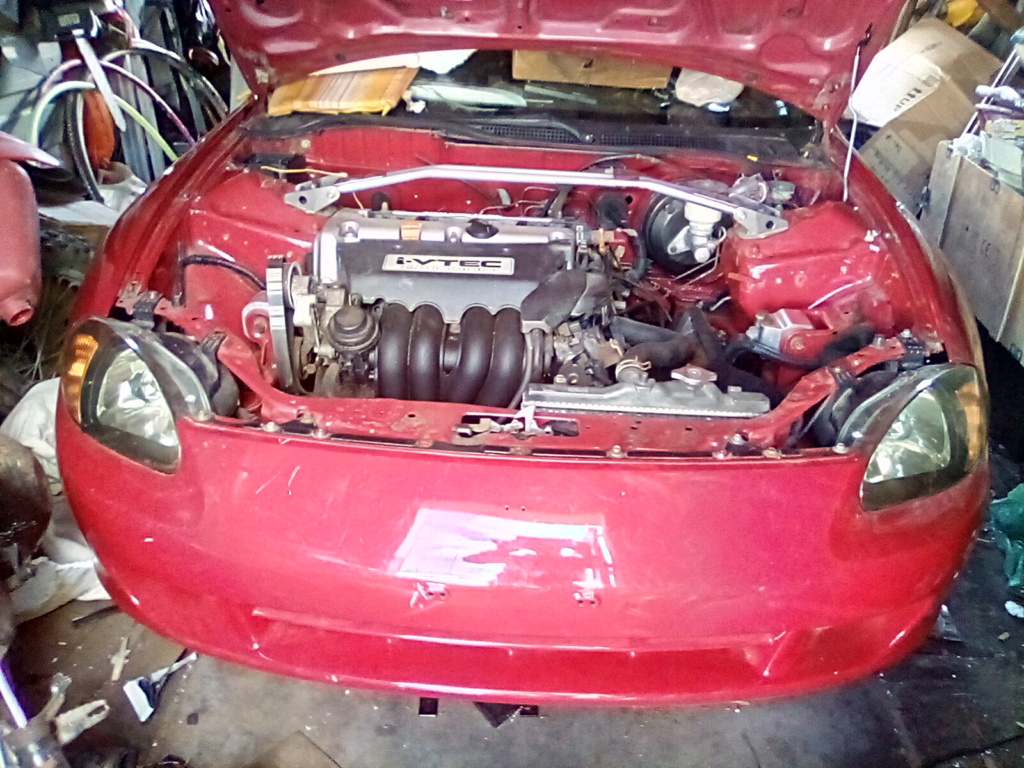 Maybe you have already seen one of these Honda 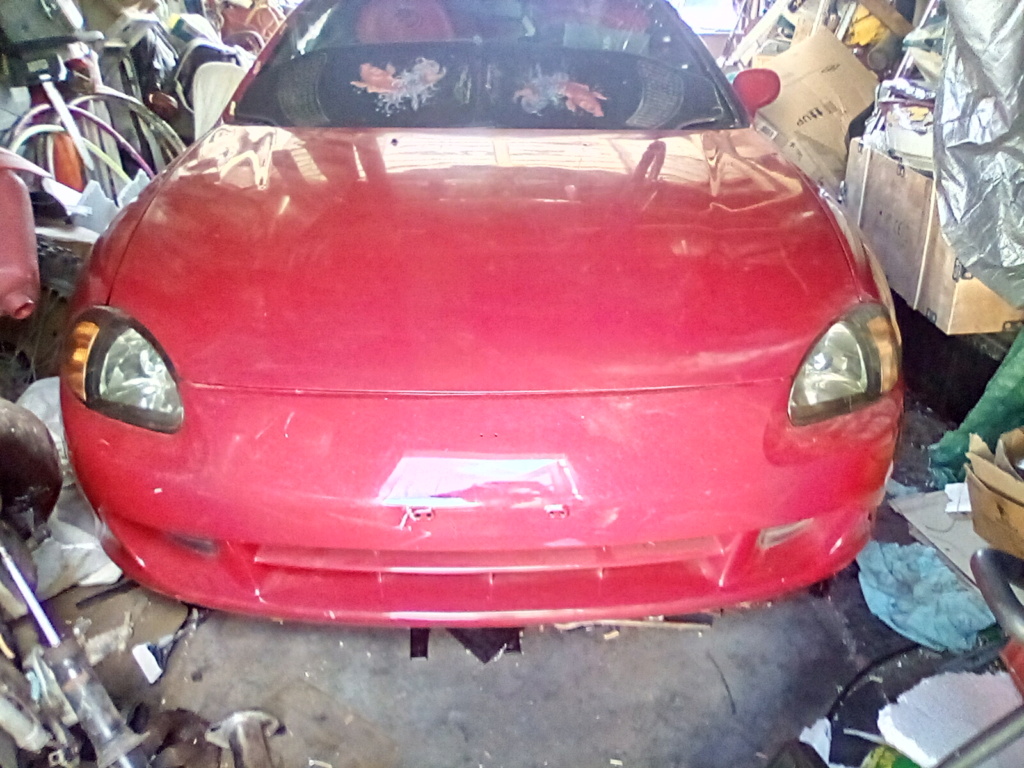 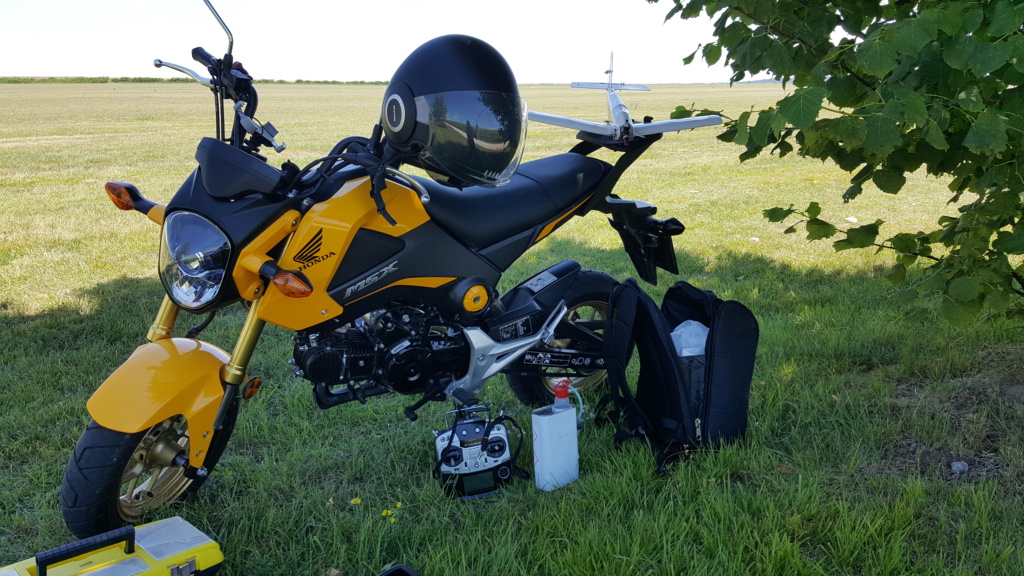 Have seen a c50 oil pump drive having a "wavy line" where the sprockets teeth used to be...

The centrifugal oil filter in that one was vertually blocked.

The chore is a bit of a pita but keeps the workshops busy.

The handlebar clutch versions are great.

Don't some long trips on a c90, 300 miles plus in one sitting other than fuel and p stops.

Surprisingly a honda moped was cheaper to buy than a pedal bike !

The newish cb360 from honda India is exactly the wrong bike for those regions of the world. Far too much hi tech. They will be a disaster.

balogh wrote:My lil Honda Grom carrying me to the field with my Lil Roughneck RC plane powered by a COX KB clone

Very nice frame, I like the look, it must be really cool and certainly very affordable, not to mention the fuel consumption, which must be ridiculously low with a ct 70, I have already blown into the tank to manage to drive home.

Well, the fuel consumption at 1.9l/100km is really low...I feel guilty at the gas station when pay with change as if I bought only a pack of bubble gum..not that petrol is cheap here, the equivalent of near 2 US$ per liter..

András, your Little Roughneck on your Grom reminded me of my Top Flite 39" (990 mm) Schoolmaster (original version) mounted to my 1971 Honda CB100 package rack with flight box during the late 1970's. I'd take it from near the University of Hawaii where I lived, through the Pali Pass to the Kaneohe/Kailua side at a public model plane field on the other side of the mountains.

I ride my Honda up to max 150km at once, even with an inflatable seat cushion, my butt wants some rest..the travel speed of the Grom is around 90 km/h but I suspect the tachometer cheats by about 10% up to give the rider the fake signal of speed for safety reason...I read somewhere this is common with bikes to psychologically deter riders from speeding? In the same time the odo tested accurate with my GPS in my phone.

Yes, you can say that András, at the time I was in my mid 20's, but it was my only ride for 3 years during college. I rode it so much, I wore out 3 sets of tyres with it. The selenium bridge rectifier used to charge the battery went bad about 6 months after I bought it. Dealer wanted too much money for it, so I stopped by Radio Shack, after after experimentation with a lower wattage one that burnt out after a couple weeks, bought their heavy duty 50 PIV (peak inverse voltage) 25 Ampere silicon bridge. It was something like $5 then. Works so good, still have it on the bike. That was back in 1980. 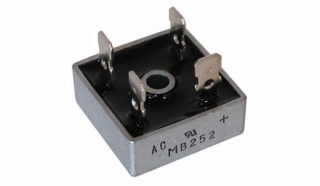 Photo of a similar bridge rectifier from allelectronics.com

Has a 25W/35W sealed beam headlight. It is not as bright as current, but it got me by. I replaced it a couple times over the years. If the low beam burnt out, I simply rotated the bucket by hand downward, and used high beam as low beam, until I could buy a replacement.

90 km/h is 55 mph, so we're about equivalent on our rides. For my 1987 LS 650 Suzuki Savage, I bought one of those bicycle speedometers and calibrated it for the front tyre. Found a convenient spot on my handle bar to hold it. It was much more accurate than the factory speedometer plus had also a trip meter that I used for timing gas stops, and an odometer that one could transfer accumulated mileage from the speedometer, so I knew how many miles accumulated on the bike. Adjacent is an LED light that shines on the digital speedometer for night use. 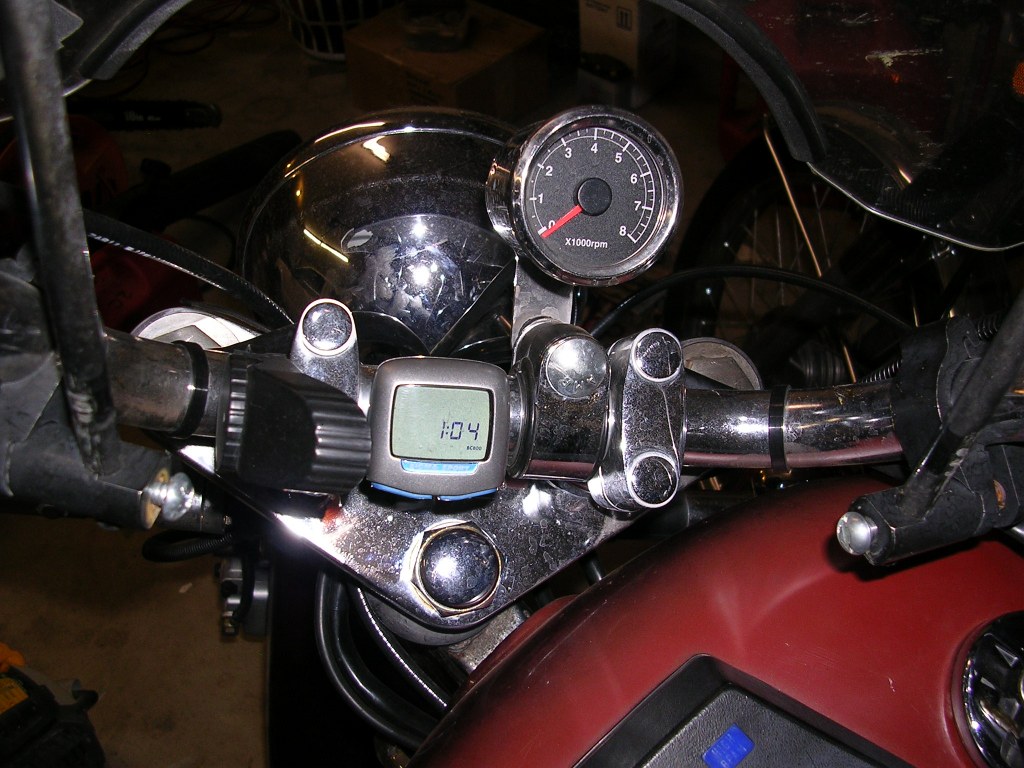 Later, I bought another one from another manufacturer to add to my CB100. Motorcycle speedometers overall typically are notoriously out of calibration, so better speed accuracy adds a level of safety during riding.

balogh wrote:I ride my Honda up to max 150km at once, even with an inflatable seat cushion, my butt wants some rest..the travel speed of the Grom is around 90 km/h but I suspect the tachometer cheats by about 10% up to give the rider the  fake signal of speed for safety reason...I read somewhere this is common with bikes to psychologically deter riders from  speeding? In the same time the odo tested accurate with my GPS in my phone.

Fortunately, the banana seat on the CB100 is decent. 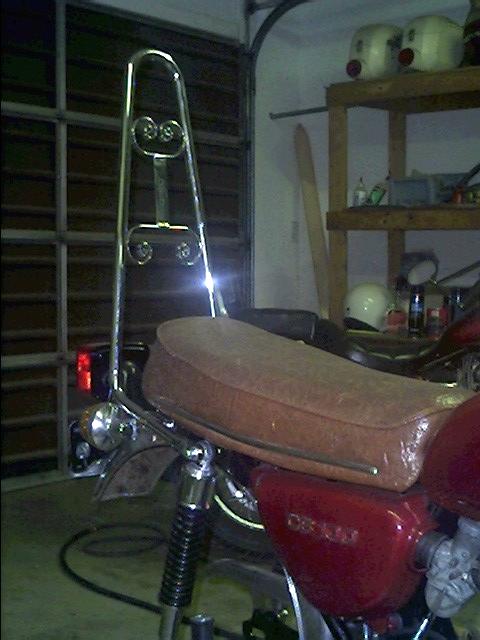 2004 photo, CB100 seat reupholstered brown by a Honolulu shop in 1980 with an NOS sissy bar by mail for a CB125. New aftermarket shocks replace worn out OEM ones, which ended tail bounce.

Some humor, cold weather shouldn't stop someone from riding motorcycles. 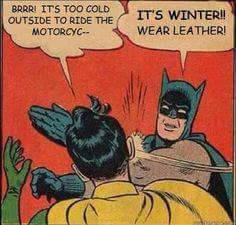 Hey GallopingGhostler, you can get handlebar weights that go on the end of the handlebars and damp out the vibrations. You can even get adjustable ones nowadays, so you can tune them to the vibration frequency. Lol. they actually do work, I used them on my Yamaha TZ GP bike as the vibrations through the clipons were such that in some races I would start to lose the feeling in my fingers and the palms of my hands because they started tingling and hurting so bad I couldnt feel properly with them. then I discovered the damping weights that go on the end which I thought would be total rubbish. but I gave them a try. unbelievable! they really worked. the engines in those Jiggers are hard mounted into the frame. no rubber in the mounts, as the idea is to have no flex, nothing moving around, so the vibration from the engine was terrible through the clipons. I always thought the vibration came from the dry clutch they ran which was full of metal and fibre plates that actually rattled so loud you could hear them rattling over the engine. Anyway, if you still ride, and it still bothers you, give it a go. you never know, it might work for you too.

Hello, Yabby, thanks for the suggestion. Do you mean? 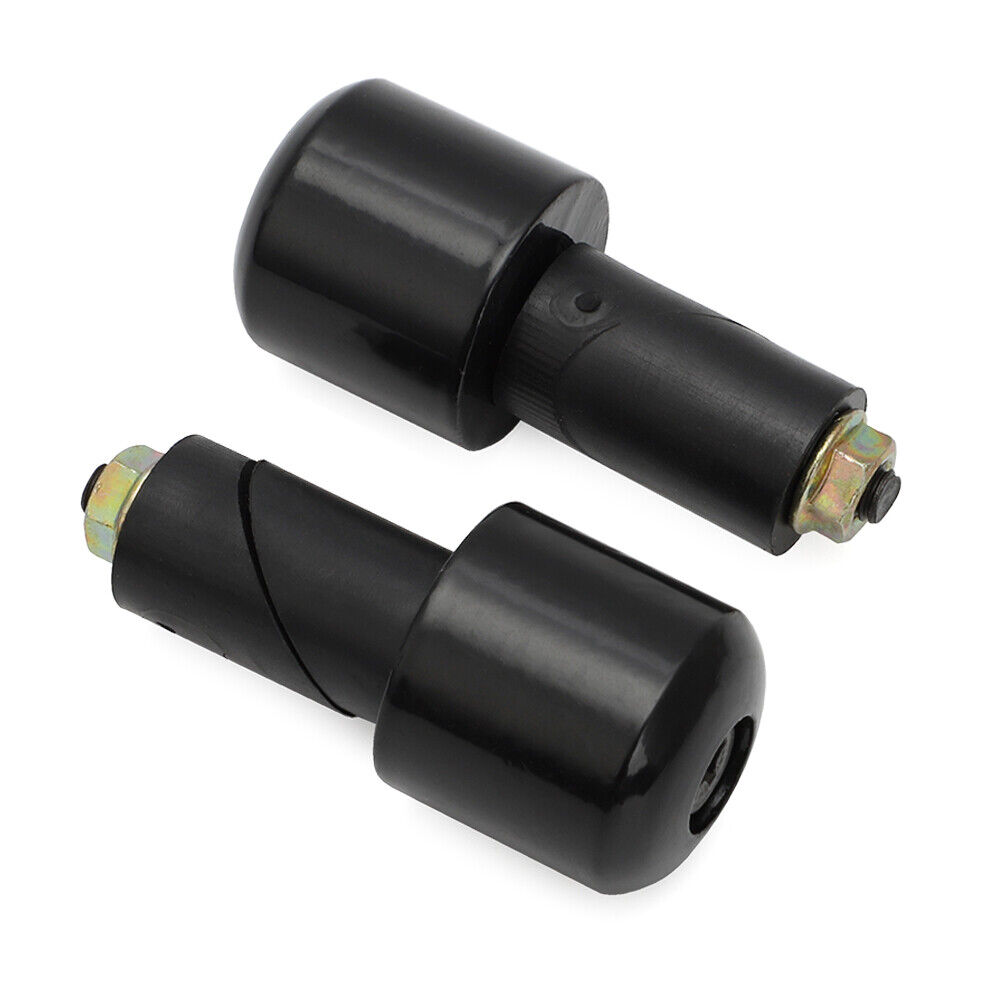 The handle bar has the cables embedded from handlebar controls and exit in the center, so can't use longer weight systems designed to go past the grips further inside the handlebar.

yep, thats the type of thing. Im not up with the current ones and what will best fit your bike. but if you can get some to fit and they are not too expensive they are worth a go. they absolutely worked for me. I was amazed! I thought it would be a voodo type idea. Lol. but if they could stop the vibration on my Jigger back in the day, they will work on just about anything I reckon. People said I was holding the bars too tight and I knew it wasnt that because I always rode with two fingers firmly on the clutch lever and two fingers firmly on the front brake lever, so I was forced into a relaxed grip. and the instant my Dad put the weight things on the end of my clipons, I never had the problem again.

Though not significantly vibrating, I would also add something like that to the handlebar of my Grom...ebay does not offer anything matching that small Honda..