I have an older one of these and it's the RC version. I was thinking of using it in a CL application. My questions are, did they make this engine in a CL version? If they did where can I find a venturi and NV that will work with it? I have looked on Ebay and didn't see anything.

I can provide a picture if it helps.

Had u thought about locking carb open with wire?

I have, just figured if possible I would do it properly. Takes the venturi size variable out of the equation.

Ron, the OS .10 MAX was sold as either or. The engine was made available in the 70's with a R/C carb and control line venturi. Some Enya's were doing this as well at the time. Yes, the parts are available through an Ebay seller. The OS 10 Max-S needle is available for approx $13. The venturi is around another $10. The FP-.10 needle is the desired needle and are probably one of the hardest needles to obtain. Extremely precise needle however. Unfortunately, the OS.10 Max has some setbacks. It's extremely on the heavy side for it's size and it's very anemic as well. The only formidable plane I've found to fly this engine was the Sterling Fokker DR-1. I have Snoopy in the cockpit and this plane was designated to be a freeflight rubber power or one channle r/c. Seeing the .049 wouldn't balance the plane, the OS .10 did for the short nose the plane had.

Even for a Akromaster, the engine is quite heavy for the power it delivers leaving no room for more. It's always better to power the plane with power in reserve rather than run it in it's max power curve. One other plane that comes to mind which did serve this engine somewhat well was the JR Nobler. It's not a high revving engine nor will it tolerate being pushed. If the horrible OS muffler that came with the engine is used it really becomes a dog. Ken

As usual Ken is a fountain of great information and timely too...got offered a OS .10 recently and was considering it but now I know enough to make a better decision

Here is the engine in question,

Thanks Ken, so it's pretty much just a hunk of pretty slag.

it's practically brand new, I was thinking it would be good for a Jr. Ringmaster or something along those lines. Guess I'll just put it back in the box.

I have plenty of TD .09's that would probably be better choices. 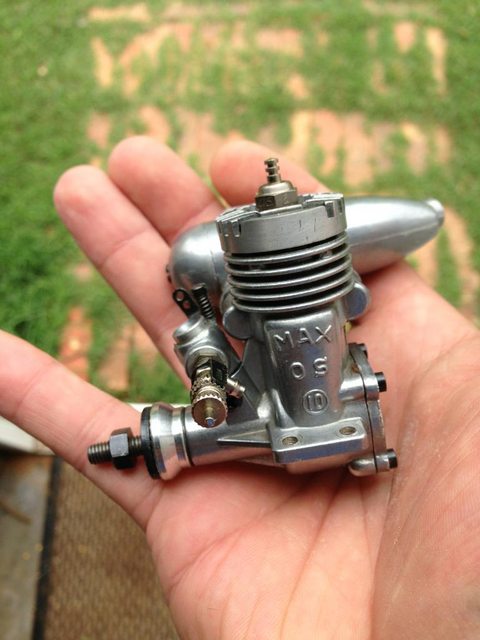 The OS MAX-S engine is well made.I certainly wouldn't call it slag. I'm just not happy with it's performance level for a control line engine for my standards. The Jr Ring might just be a good choice. I've had a lot of experience with the JR. It's not a good flying plane. These two might just make a happy couple. The Jr suffers from extreme nose heaviness and a small wing even with the recommended engines. I extended my fuse on the JR 2". I was using an Enya .15. The Enya's aren't the lightest in the bunch. The TD would certainly wake up a JR and it's weight would be perfect. The real problem with the JR was the wood that Sterling used. I think it was the off fall of scrap from the Louisville Slugger bats. Many things can be done to the JR to make it fly better. Ken

The early OS .10 were made a little differently from other engines, like the Enya .09. While most engines would a have a baffle on the piston for the cross flow scavenging, the OS .10 only had lowered side on the part of the piston facing the transfer port. This might be one of the reasons for its lower performance. The later .10FSR (schneurle porting) run much better. And the .10FP is even better with ABN technology.

Here is the innards of a PET; 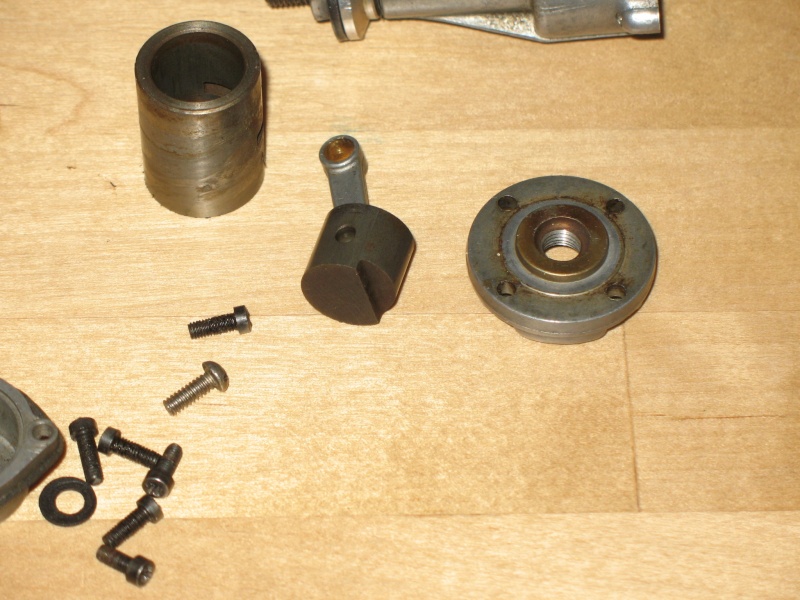 The Max .10 was a decent engine in its day. It has a bit more power than the Pet .09 and I've had a lot of fun with those. I have one NIB Max .10 and some Pet .09's (RC and CL). Some choose to disregard these old engines because newer ones put out more power. If you choose a plane that fits within their power range, no problem. You also want to use a larger prop because they develop their power at a lower RPM range.

I would suggest that you can have a lot of fun with the engine if you just respect its limits. Also, part of the reason the engine is heavy is because OS used VERY heavy mufflers in those days. 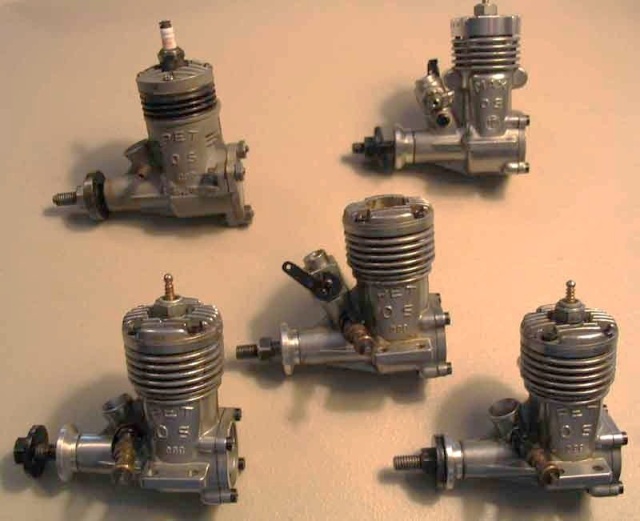 I'll give it a whirl on something. We'll see.

@cribbs74 wrote:I'll give it a whirl on something. We'll see.

The Ringmaster Jr. you mentioned or a Flying Clown should work OK. If your flying site permits I would fly without muffler. If you build a Ringmaster Jr. from plans I would suggest you eliminate the wing sheeting.

You mentioned that the engine is nearly new. It wouldn't hurt to give it a proper break-in to make sure its ready for peak runs.

Those early air bleed carbs that O.S. used were one of the best engines around at the time for throttle response. I'd save the engine for a R/C plane.

@cribbs74 wrote:I'll give it a whirl on something. We'll see.

The Ringmaster Jr. you mentioned or a Flying Clown should work OK. If your flying site permits I would fly without muffler. If you build a Ringmaster Jr. from plans I would suggest you eliminate the wing sheeting.

You mentioned that the engine is nearly new. It wouldn't hurt to give it a proper break-in to make sure its ready for peak runs.

It will surely see duty on something, be it a Jr. Ring or Flying Clown. I have a Fox .15 and and a couple TD .15's to contend with as well. I wasn't sure where the O.S. would fit in to be honest. Armed with info I can now make a better decision.

@Mark Boesen wrote:FYI, Those early air bleed carbs that O.S. used were one of the best engines around at the time for throttle response. I'd save the engine for a R/C plane.

You are correct about that, Mark, I really like that engine for RC. Back in the late 1970's I used my OS Max .10R/C unmuffled with factory exhaust baffle plate on a 39" span TF Schoolmaster and 1990's on my SureFlite 40" Piper Cub foamie ARF. It provided sparkling performance with very smooth throttling. At 3 oz, it was a decent upgrade for a .049 plane, flew well with 7x4 prop. Half throttle power was akin to a .049 reedie. Half throttle and lower, noise was that of a muffled engine. Wide open throttle was same loudness as a .049 reedie.

Following the threads on Ringmaster Brotherhood forum current trend is a .09 to .10 Schneurle as being optimal, an older .15 cross scavenged such as Fox, Veco, etc. too. I put an OS Max .15FP-S on mine, it was an overkill and its heavier weight penalized flight. The Enya .09-III and later provide a tad more power than the OS .10S, although as George pointed out the OS would still be decent on shorter 42 feet lines.

Except for my RC experience and CL with the .15 FP and Enya .15-III TV, I must admit though I am reguritating what others have stated. Recently I mounted a Fox .15X on the Ring Jr., will have more to report when I've flown that. At 3.5 oz, I removed considerable counterweight from the stabilizer, necessary when I used the FP.