Log in
Search
Latest topics
» Home made fuel nipple for COX Tee Dee RC carb
by sosam117 Today at 8:16 am

» Tank Cleaning and an Old Rant from my Youth
by Ken Cook Yesterday at 8:24 pm

Could one not call it a modified Cox engine from the prop forward?

Rules were meant for an engine like this, as you can see the only Cox parts is the cylinders. 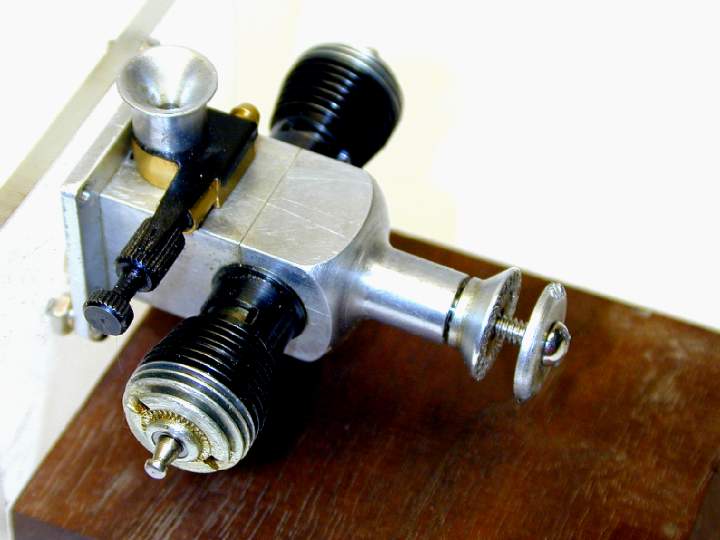 BUT rules is rules  "Cox engines using aftermarket or handmade parts and multi-cylinder engines are allowed as long as they feature Cox made crankcase(s) and cylinder(s). "

It may be that the cylinder of this is a highly modified COX "made" part, and if so the engine should qualify. But if it was not machined/modified from a original Cox Cylinder then the rules exclude the entry

BUT rules is rules  "Cox engines using aftermarket or handmade parts and multi-cylinder engines are allowed as long as they feature Cox made crankcase(s) and cylinder(s). "

It may be that the cylinder of this is a highly modified COX "made" part, and if so the engine should qualify. But if it was not machined/modified from a original Cox Cylinder then the rules exclude the entry

While the piston, con rod, crankshaft (Bee heavy duty crankshaft) and crankcase (shortened to accomodate the bee crankshaft) are Cox - the cylinder isn't and it is not a modified Cox cylinder.

It is machined to accomodate a contra piston for true diesel running and longevity.

I'll let Jacob decide on this.

Oh boy, you people love giving me a challenge. Time to rewrite the rules...again. I'll let that dieselized Thermal Hopper slide, only because it was made with mostly Cox parts and the cylinder appears to have been designed after a stock cylinder. The rules were basically written for mulit-cylinder engines that are often built with completely custom made parts except for the cylinders. Since the crankcase and cylinder are the 2 main parts of the engine, it was required to have both made by Cox. Perhaps the rules should be stated as a certain percent of the engine has to be Cox. We still want the engine to a "Cox Engine" but don't want to exclude engines that are modified. I'll discuss it with the rest of the staff.


The engine must be a Cox engine, it can be stock or parts built. Cox engines using aftermarket or handmade parts and multi-cylinder engines are allowed as long as they feature Cox made crankcase(s) and cylinder(s).

Why not have 2 separate E.O.T.M. contests. One for Unmodified / Stock Cox engines and one for Custom / Modified Cox engines.
That way engines like the Ian's modified Thermal Hopper won't be questioned.

I am very happy that the Thermal Hopper was not rejected, I have felt very guilty that my first post caused issues.

I was very pleased with the discussions that followed and the comments.

I asked the question because I would like to enter one month and had been studying the rules.

It was also interesting that Ian1954 did not object to the posting and openly conceded that the cylinder was not Cox even though it could have been a modified one.

The camradery in this forum is amazing. I am more of a spectator than a participant as I collect and display
Cox 049 engines. Nothing smaller, nothing larger

I saw these dieseled Thermal Hopper advertised by Ronald Valentine a while ago. Not many have been made but Ronald, in the description, acknowledged a designer. From the postings on the forum, the name and the collection of engines displayed in "other engines" - particulary the twin Nano - I would hazard a guess that the quoted designer who supplied the idea was supplied by Ian1954.

All the engines in the competition are wonderful but some presentations and pictures are better than others. It is still difficult to decide which to vote for.

Hey JanPar, WELCOME!
I don't think you stepped on anyone's toes.
That was a legitimate question.
That aside, I'm glad you decided to join the fold.
You know your way around here, so I'm looking
forward to your posts and photos.