The Mk 1 was equivalent to a Cox TeeDee 051 but was 4 grams lighter at 42.5g and may have been a little more powerful.

It was designed as a drop-in replacement for the TeeDee, so it used TeeDee glow heads and fitted onto bearers that had been spaced and drilled for a TeeDee. Like most Russian engines, it preferred smaller props than the TeeDee.

Best performance was obtained with props in the 5 to 5.5 inch range and pitches that let it wind up fast.

The engine was designed for the Cox TeeDee glow head.

Cox comparison - should really have been a TD but wanted to compare silencer. 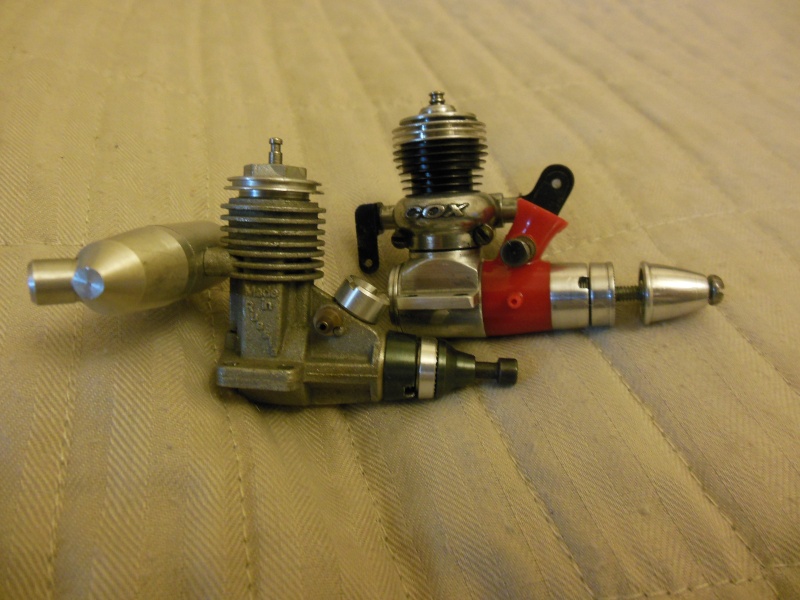 The VA MK 1 and also the Mk 2 share a common part which is the gudgeon pin. This is a real fault in the design of this engine in my opinion. However, these engines were designed for free flight and were not designed to run for minutes at a time. The engines and the MK 1 called it R.Y.O.T which meant roll your own timing. The conrod is attached to a small disc which threads into the bottom of the piston. The shims are placed on top of this disc and threaded into the piston. The best fix is to understand how many shims are required for your use and Loc-Tite the disc into the piston immediately. The amount of shims can alter the engine run from running mild rpm's to high rpm's. Two problems occur here, the piston wants to unscrew off of the disc (Gudgeon pin) and or the wrist pin develops sever play due to the hammering that occurs from long duration runs. I have many of these that suffered the wrist pins wearing out. There just is no parts supply for them other than have a larger wrist pin made. A severe clicking will develop. These engines are much happier with small low pitch props . The muffler on that engine robs performance by the tune of over 1500 rpm's . The Mk 1 is also known as the split case and the engine mounting bolts plus 1 screw hold the engine together. Don't allow the engine to vibrate and come loose as it could be very short lived. My experiences are all with these engines running in combat.

I just sold all of my MK 1-2's to a very well known freeflight flyer . He was recently in Florida when his Nats winning bird never returned. Off went the plane never to be found. Locating a new MK 2 is quite difficult and I was able to provide him with a new one. We had a long chat concerning these engines. They really are a very well made engine and are truly a joy to run. They do have some issues but these can be curtailed if you understand them. Ken

I have one of these engines. Got it in a parts lot. I have the timing shims and the venturi insert but am missing the muffler and spinner. Yours is from the first run IIRC. Also if you take the head off you should see a number scratched on the top of the piston. This was the piston cylinder fit. Mine has a 5 which was the loosest fit. Low numbers were desired.

Three individuals were responsible for these being imported into the US in the mid 90's, which were George Alrdrich, Dan Rutherford and Larry Driskill. I have one unrun MK 1 from George with detailed instructions on how to set up the engine. While the muffler may have been a stock item in other parts of the world, it wasn't made available to the US as a stock item that came with the engine. George would typically go through your engine based on how you chose to run it and offered either a free flight needle valve or a fine threaded short needle for combat. I'm fortunate to own both versions but I do believe I may have passed on some of these items to the free flight fellow.

I would say that the MK 1 runs with a little more guts than the TD. The MK 1 however doesn't swing a full 5x3 like the TD does. So I suppose it all comes down to build your plane around your engine. The VA MK 2 was my first true 1/2A to break 30K. Ken

Thanks for all the information. This one is unrun and I believe that the head is the version that accepts the Nelson insert.

I have just tested my eyesight to the limit trying to photograph the piston. It looks like a number 4 but what I see and the camera captures is  not always the same! 5 attempts before this. 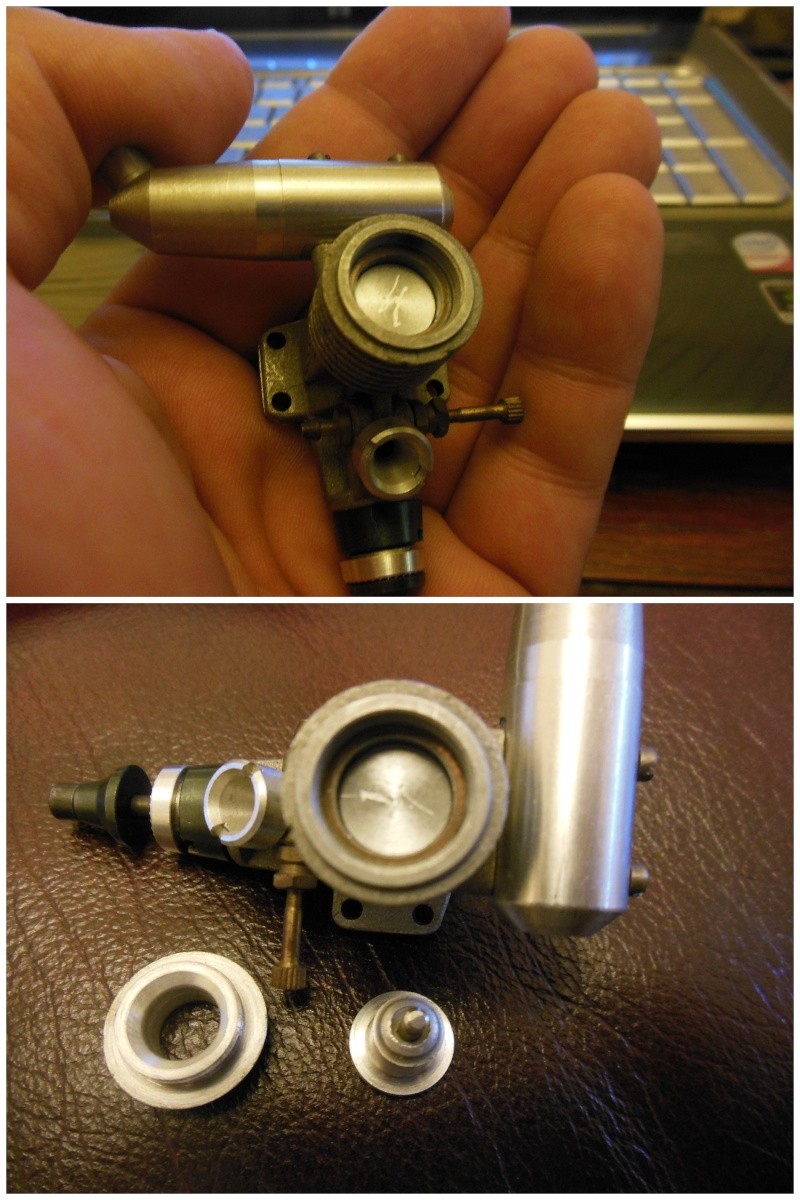 I like the idea of the fits being tested, but why would anything beyond a 1 or 2 be sent out the door?

Unless a 5 is not all that loose.

I have two of the MkI ones, but only recently got hold of a MkII RC diesel. The MkII seems a little sturdier as it doesn't have the split case and the piston adjustment has been glued in place it seems. As there are many other good diesel engines around, I will probably run this one on glow. The threads of the head is different, compared to MkI, and parts are nowhere to be found, so I made an insert for a turbo plug. I eyeballed the diesel head in terms of squish band, and will have to play around with head shims to get it just right on glow. 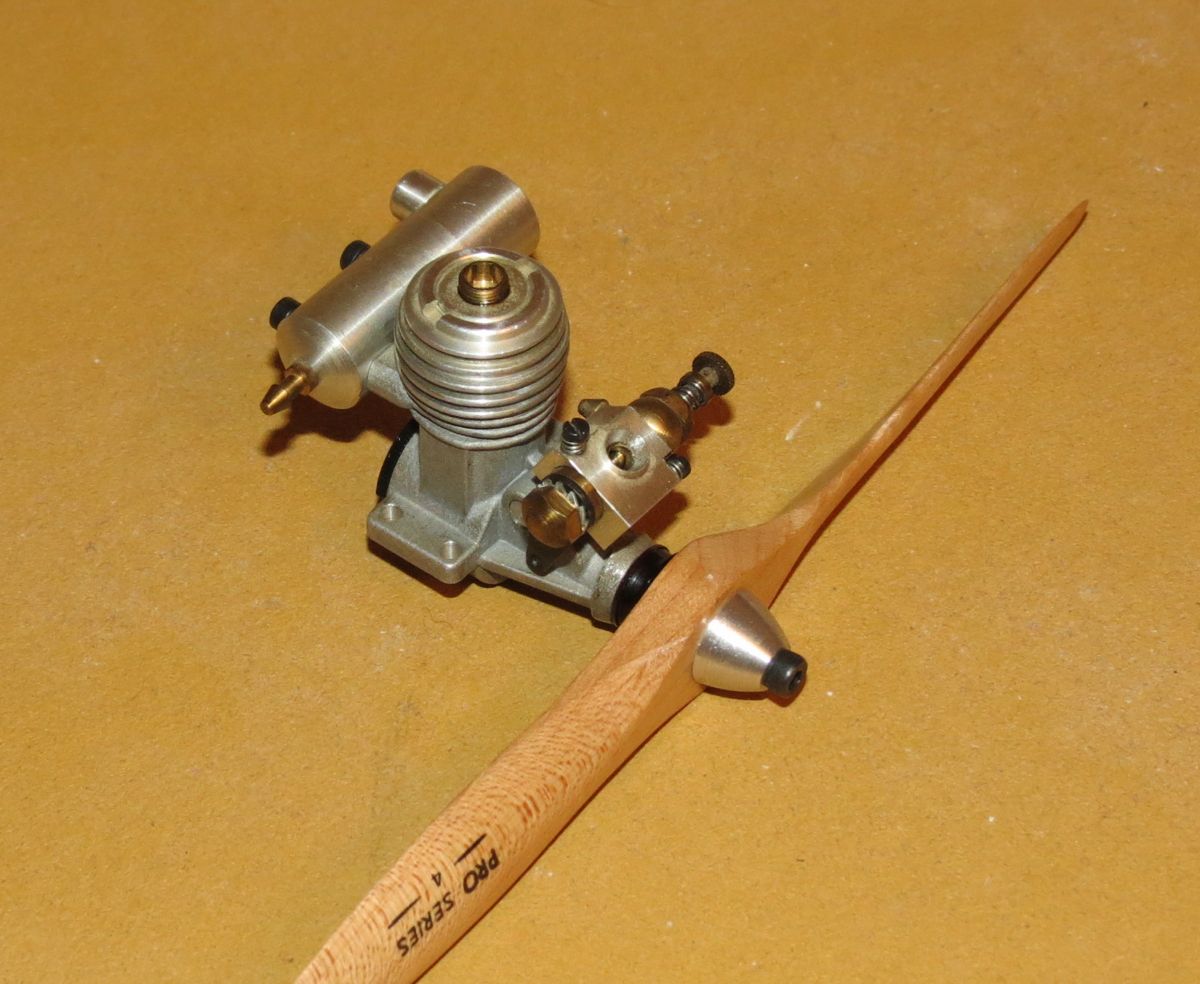 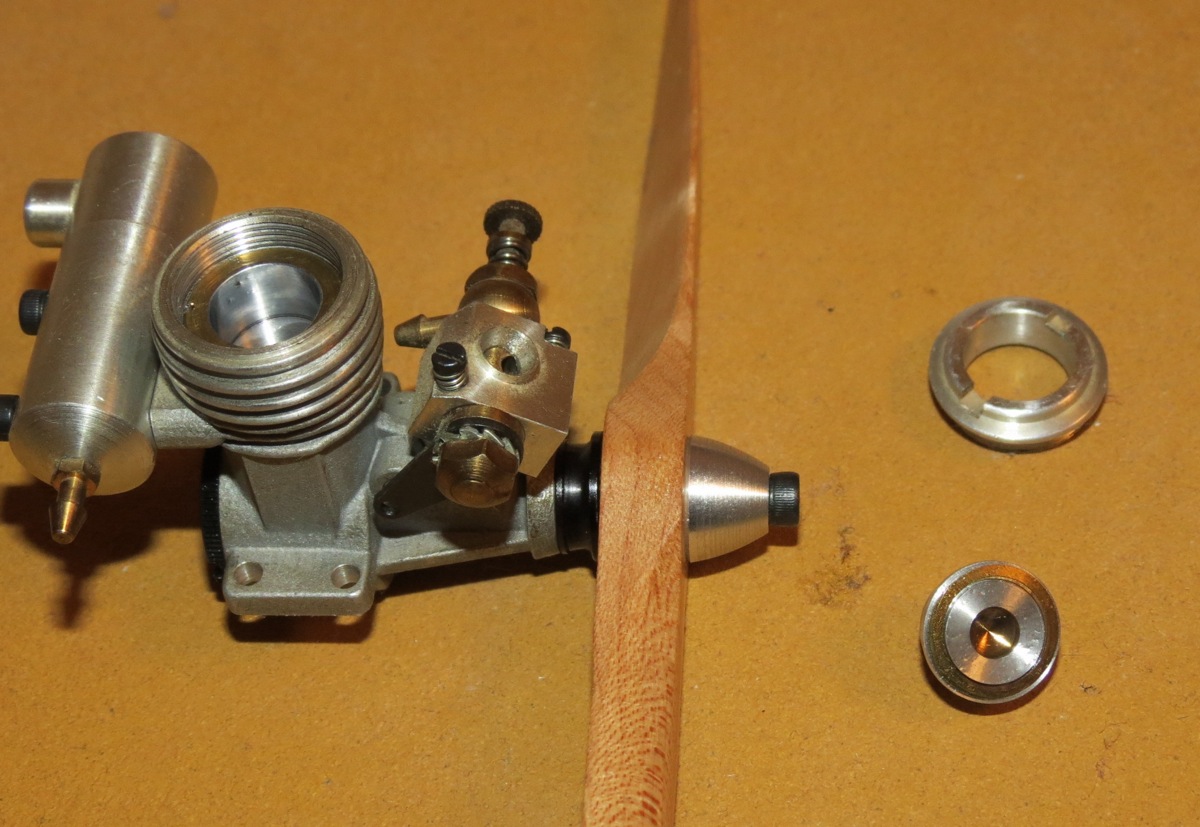 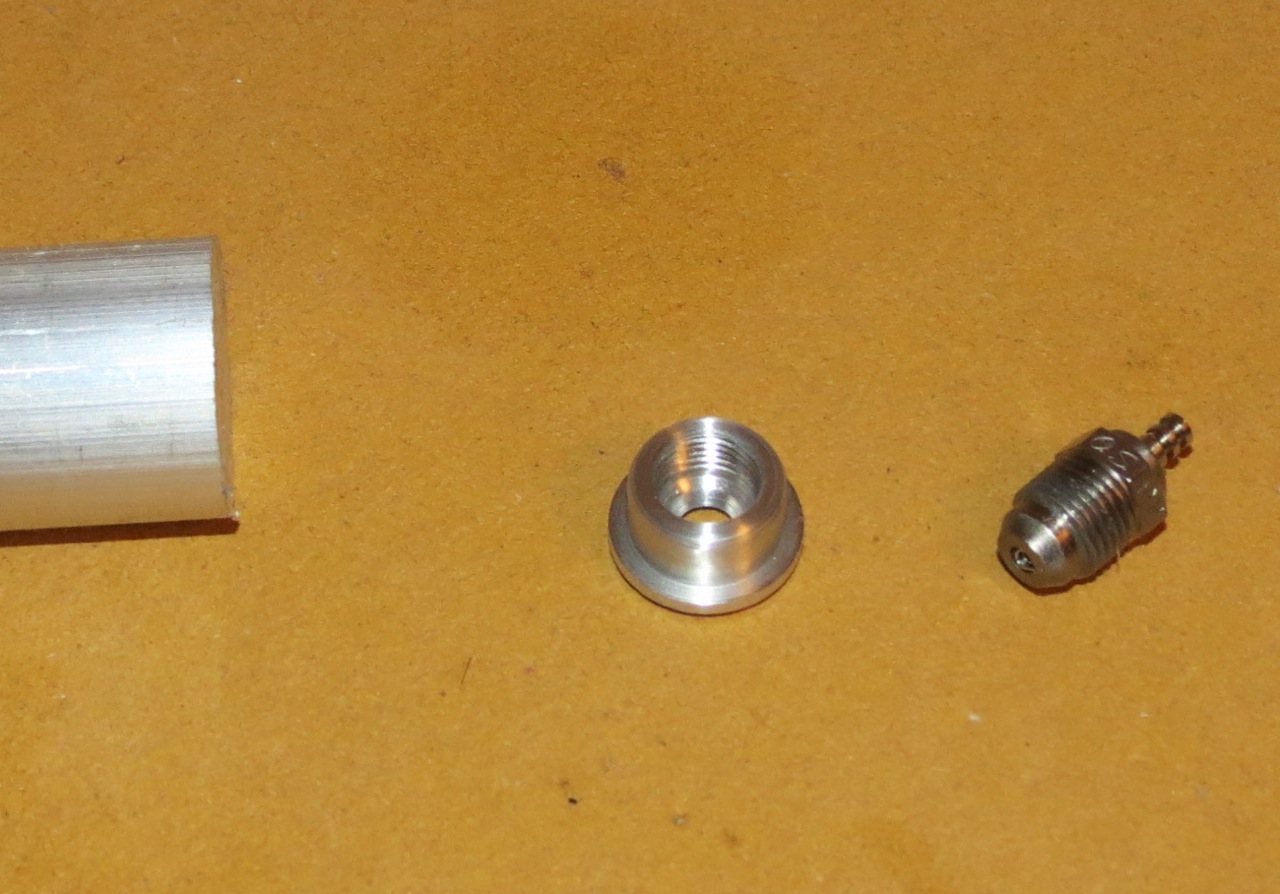 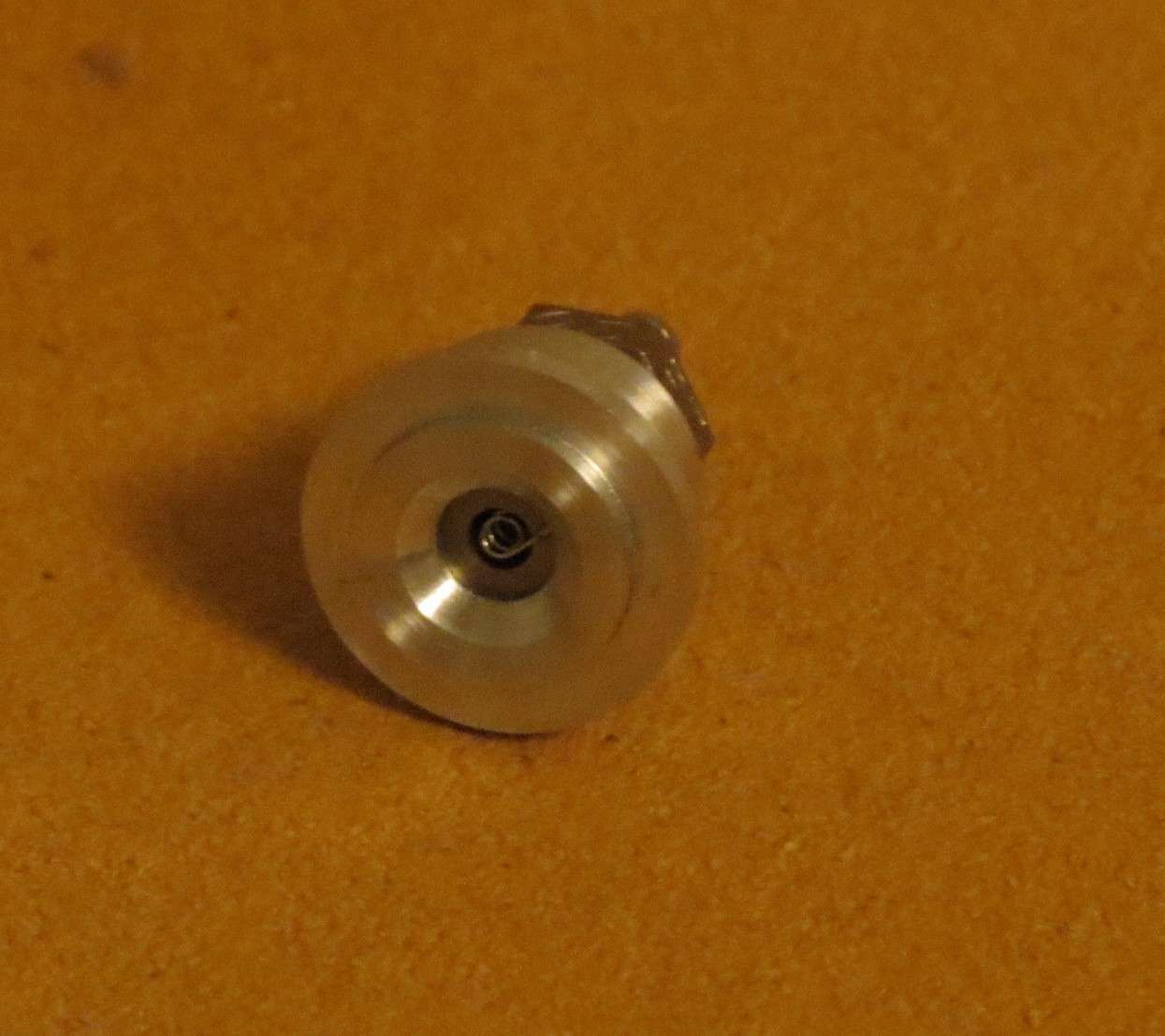 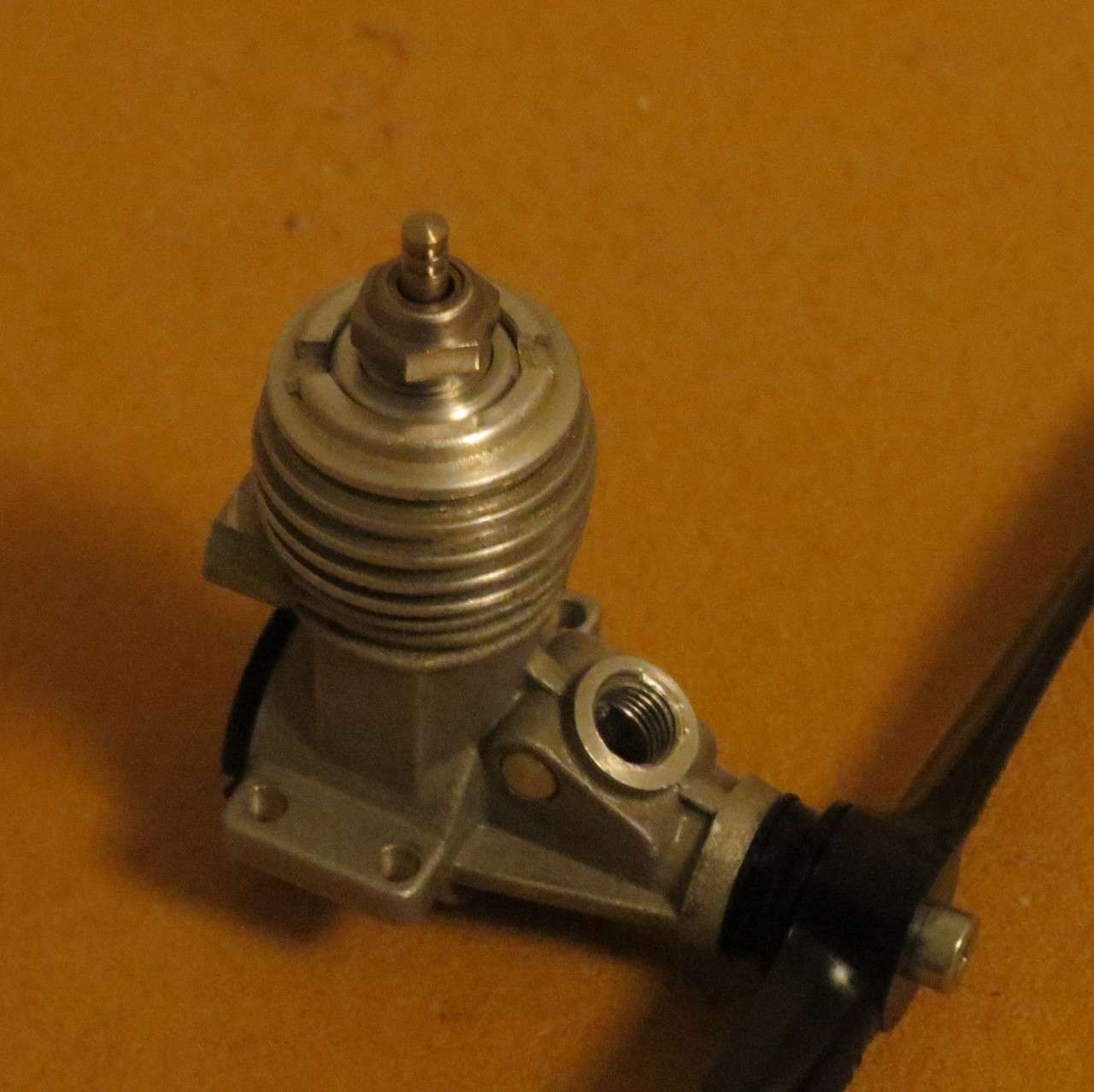 I prefer diesels but the small ones don't always respnd well to an RC carburettor.

I am more likely to convert from glow to diesel but, I often find, that I have to reduce the size of the venturi opening to draw less air. I wonder if the reverse is necessary when going from diesel to glow.

Still - you never know until you try it. I have some PAW engines that were supplied with both diesel and glow heads - they run fine in both modes but the diesel has the edge.

Yes converting a dedicated diesel engine (like the PAW) will have a few design problems due to the smaller transfer channels and carbs etc.

The VA was originally designed for glow though and the Diesel one is just a conversion head (I think). So I'm merely converting back to glow...

The transfer channels and crank opening etc. shows that this is serious business; 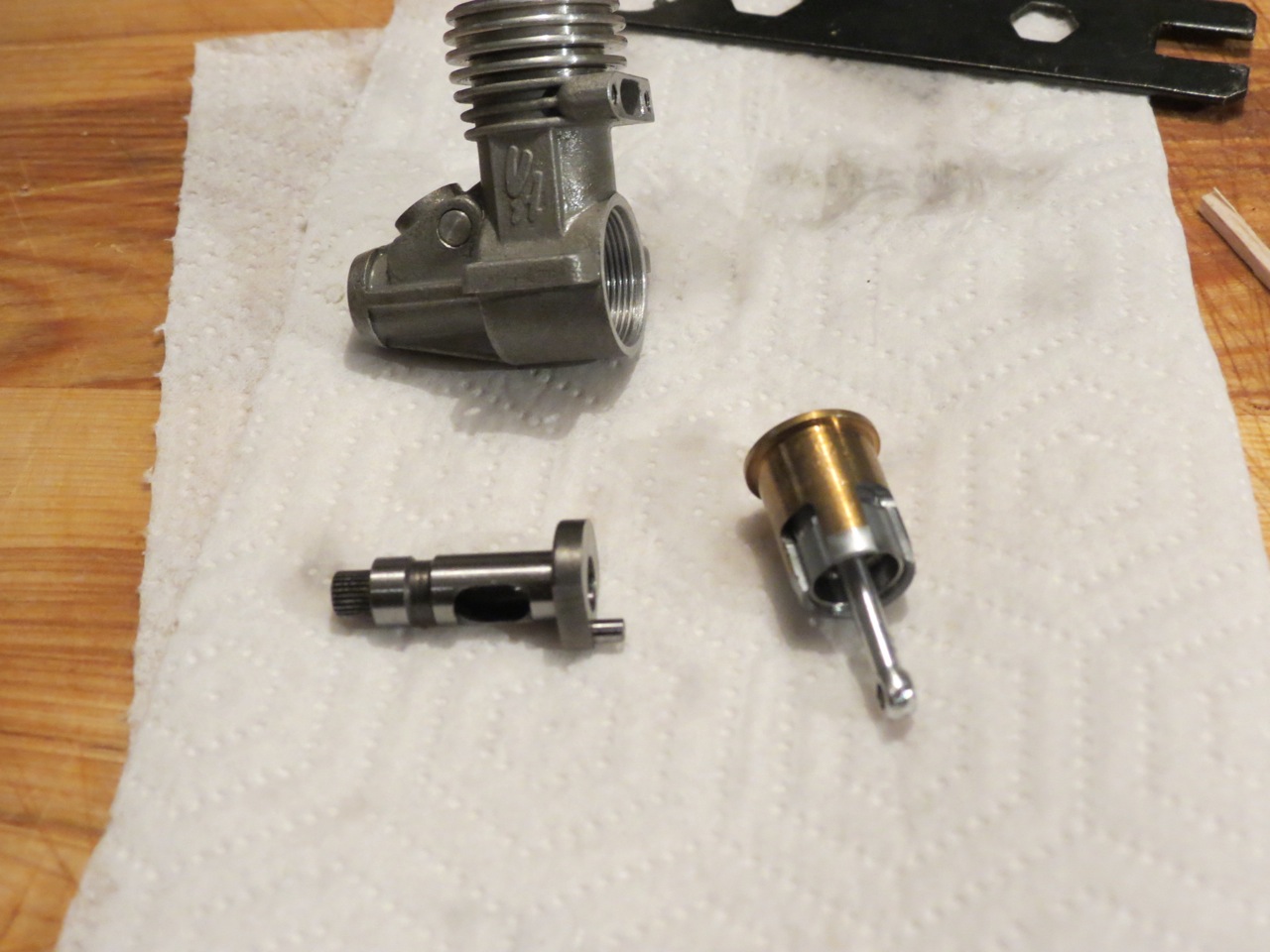