I had an apartment 4 years ago. The Landlord is a Doctor with an office on the 1st floor. He let one of his "rich" buddies use the trash dumpster one day. I go out with my trash... and there (luckily sitting atop an almost-full container) were 3 components. A Polk powered-sub, a Sony 5-disc CD changer... and the Denon AVR-1506 receiver I have in the workshop. When I asked the Doctor/landlord about them; he said... "Oh yea... I was gonna' tell you about those..."

As it turned out; they all worked perfectly... and still do! I am continually amazed at what people just "throw away"...

Nothing fancy here but I do listen to music on my computer.

Matter of fact "Eagles" Farewell Tour" to Melbourne is playing as I write.

Life in the Fast Lane SD

@SuperDave wrote:Nothing fancy here but I do listen to music on my computer.

I listen to 'pandora' with a old Altec Lansing computer speaker system w/ large subwoofer, doesn't sound bad but not as good as 'normal' stereos.

@OVERLORD wrote:Thanks, Jacob for the info. Now, the seller wants 120 Euros for it, must be negotiable though. He says in the advert it's in very good condition and about 40 recorded cartridges come with it.

120 EUR is not too bad. The 40 cartridges is a good plus. Do you have any pictures of it? My main concern would be the motor although I wouldn't judge the motor until the belt is replaced with a new one. 8-track decks are high maintenance, I don't think I have one deck that didn't need work when I got it. The 8075 uses a 12.5" drive belt and a small 8.6" belt for the digital time counter. http://www.turntableneedles.com/find10.asp?manfg=WOLLENSAK&modelname=8055&Select=Model (shows belts for the 8055 which uses the same belts as the 8075) Another issue with these Wollensak decks is the little pinion gear that drives the digital time counter. The gear cracks between a tooth and then slips on the shaft of the time counter. I have successfully repaired those gears in both my 8055 and 8075A.


If you get an 8-track deck, let me know what kind of music you like, I'll send you some nice fixed up tapes. I already have a stack of boxes and packages I have been meaning to get sent out for the last few months now LOL.
_________________
-Jacob

Thanks for the info, Jacob.

The only picture of the advert:

From what I can see, it looks alright. No missing switch levers. Has the manual. If this is one of those international units with the selectable voltage and frequency, I would go for it as those are rare. $160 is about the going rate for 8075's on eBay in the US. I paid $90 for mine a few years ago from a little local shop. I replaced the belts, adjusted the head and repaired the time counter gear (not needed for it to play properly). The Dolby N.R. circuit still needs adjustment which I don't have the equipment to do, I just don't use it with the Dolby switched on. I have been thinking about sending it to Barry http://www.barrys8trackrepair.com/8TrackPrices.html for a complete proper overhaul one of these days.
_________________
-Jacob

In the mean time, the Wollensak is sold, or is not advertised anymore. But there is another 8 track player coming this way from the UK. It's one of the new ones advertised on eBay.

Almost reminds me that little Soundesign I found at the car show last summer. 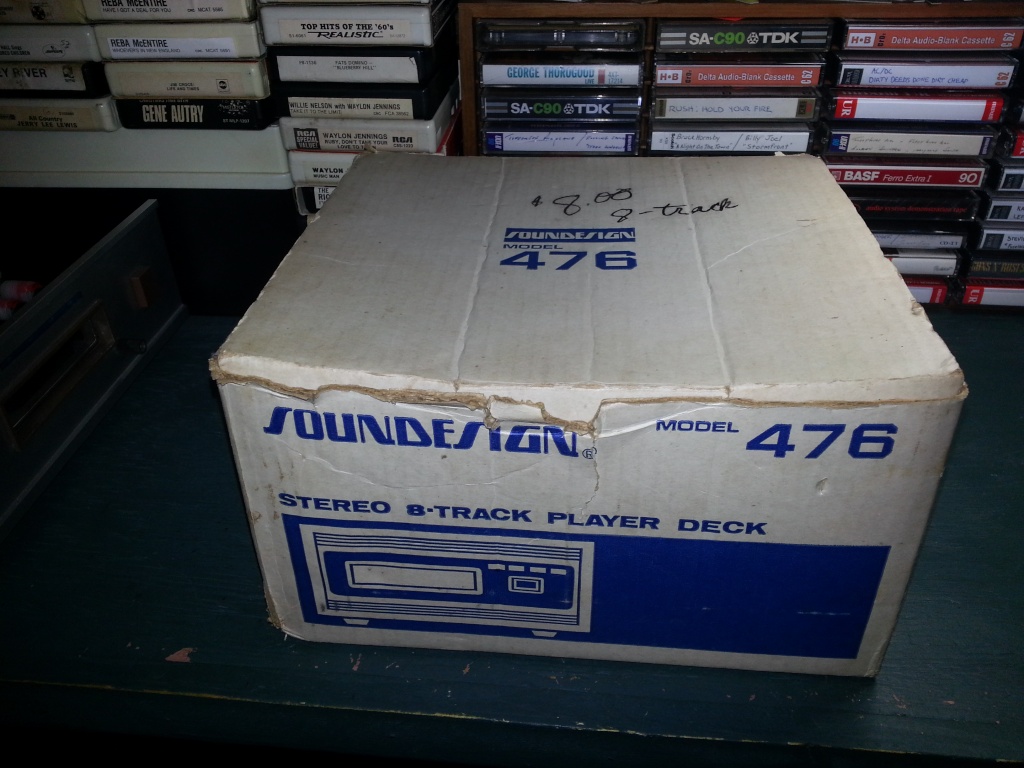 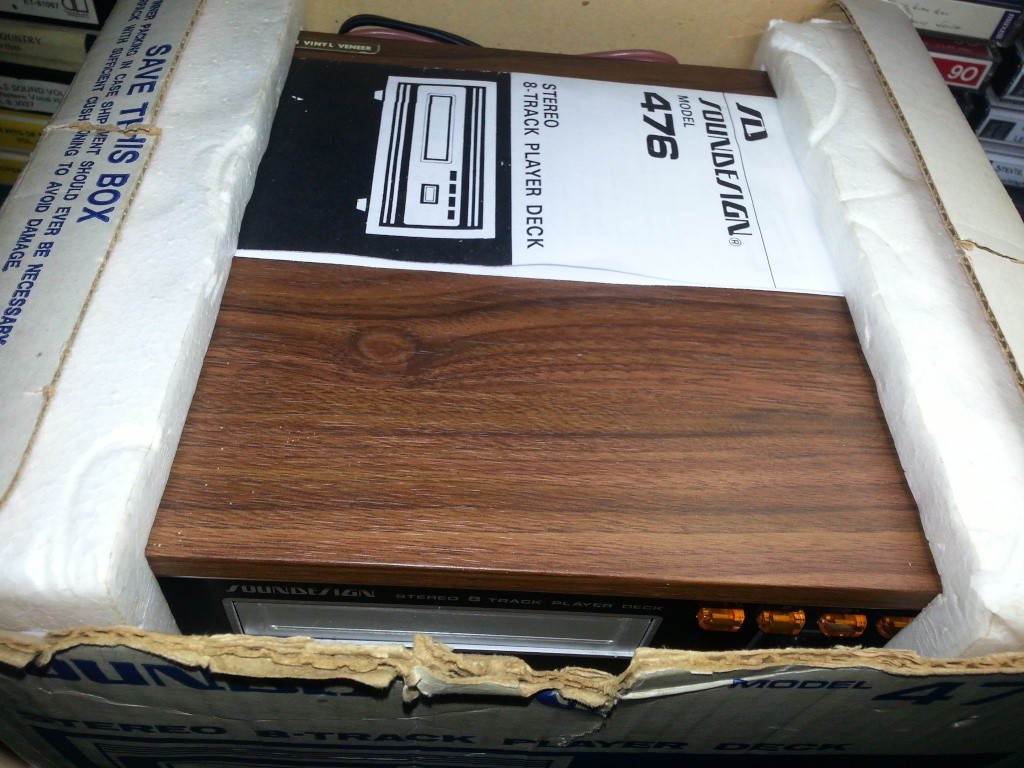 Yes it is, Looks quiet the same as your Soundesign.

Years ago one of my pals had a couple 'Gentlemen' turn his work shop over and rob him.

The next time I went over to see him he had a pick axe handle with wrist strap
hanging next to the door with the legend VERY GRAPHIC EQUALISER next to it.

@John Goddard wrote:Years ago one of my pals had a couple 'Gentlemen' turn his work shop over and rob him.

The next time I went over to see him he had a pick axe handle with wrist strap
hanging next to the door with the legend VERY GRAPHIC EQUALISER next to it.

yes... a "Big Papi style" whack to the kneecap, would surely make a "would be" robber think about changing careers...

Its that time of the year again! 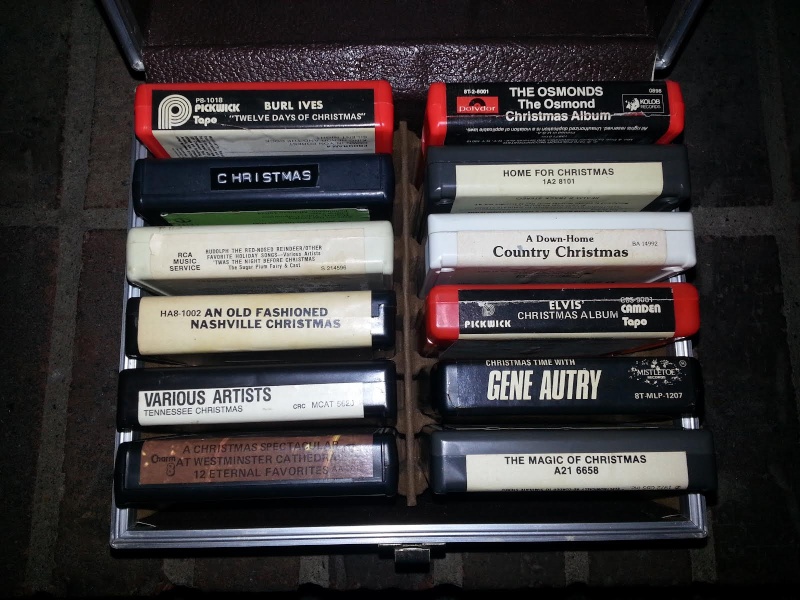 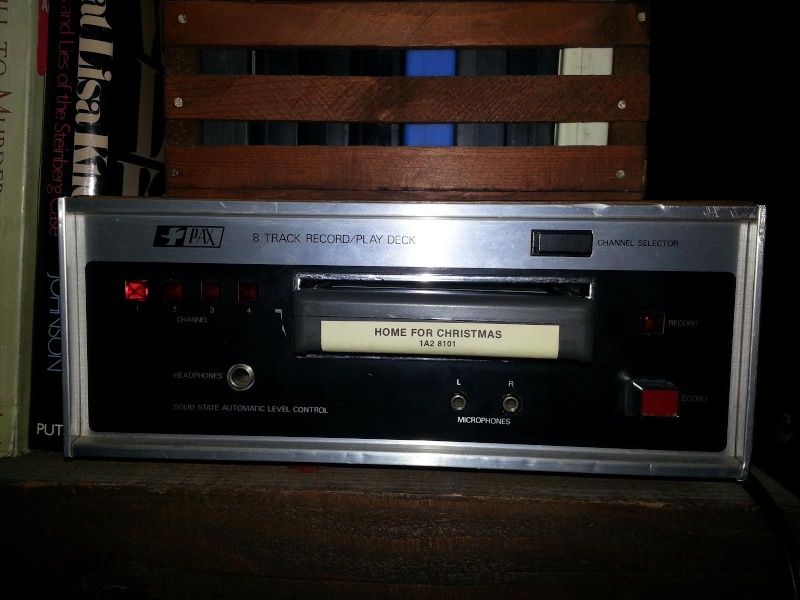 Jacob. I have an old "Automatic-Radio" 12Vdc 8-track deck that was in my Grandfather's 27' travel-trailer when I was a kid. He towed that big trailer with a 1965 Merc. Monterey/Marauder 390 V8... that also had an under-dash AR player.

The 12Vdc stand-alone deck that I still have.. is rugged and heavy. It has an all-steel chassis and separate knobs for Vol., Bass, Treble and Balance. I have to wonder if it still works! 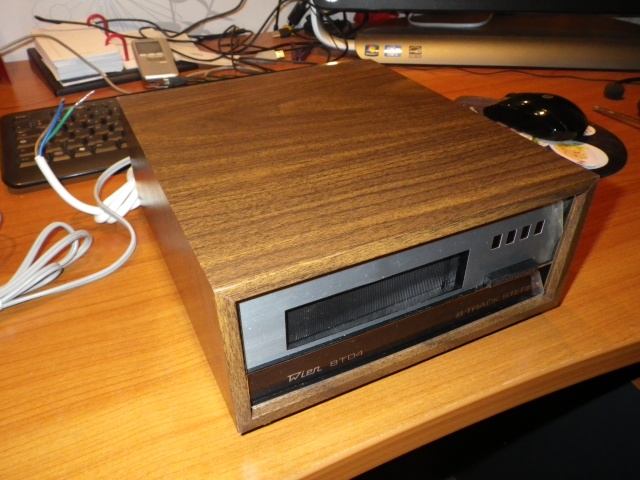 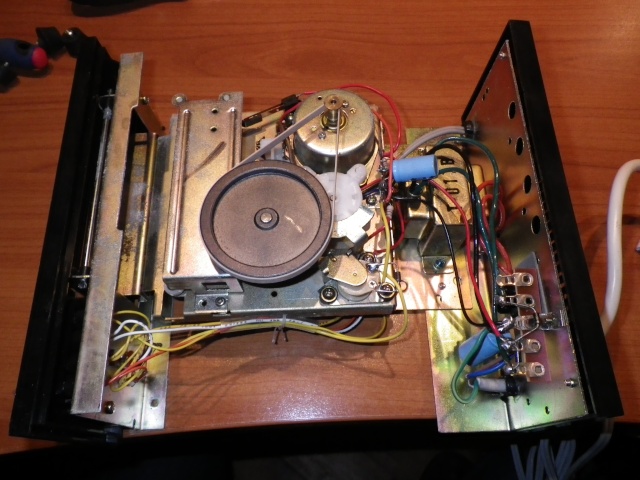 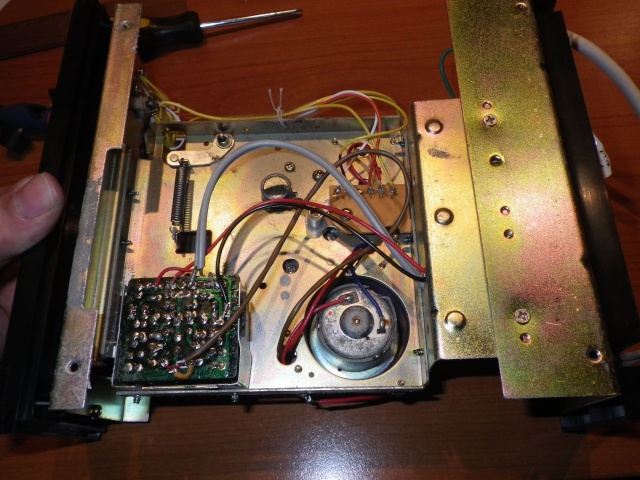 In the beginning of this week, I jumped over to Belgium to say hello to my family. I brought back with me my 8 track cartridges. I found them in a 70's vynil case with lock! I also found the converter I had to play cassettes on an 8 track player. 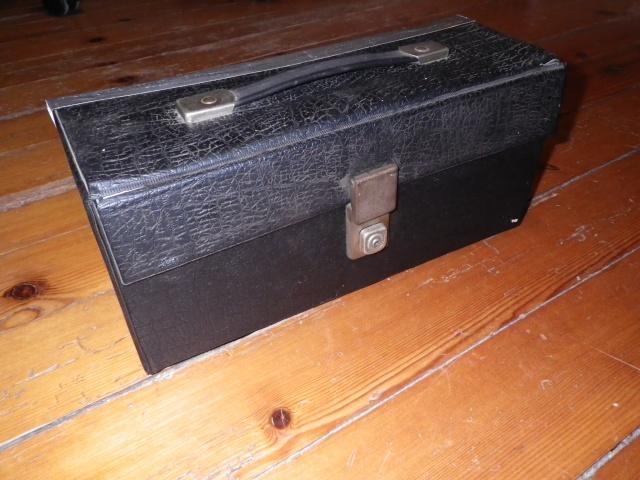 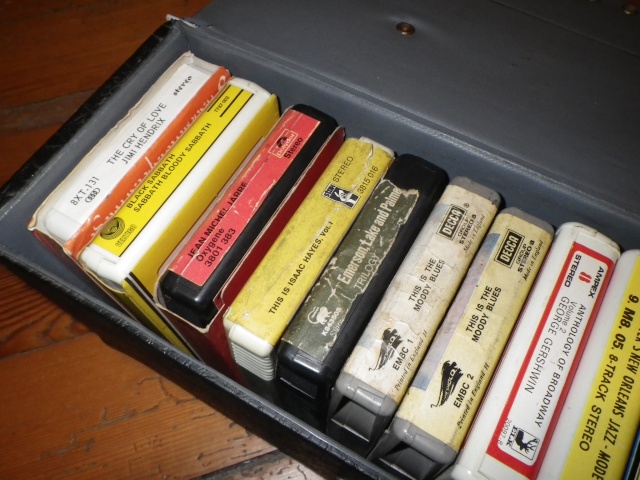 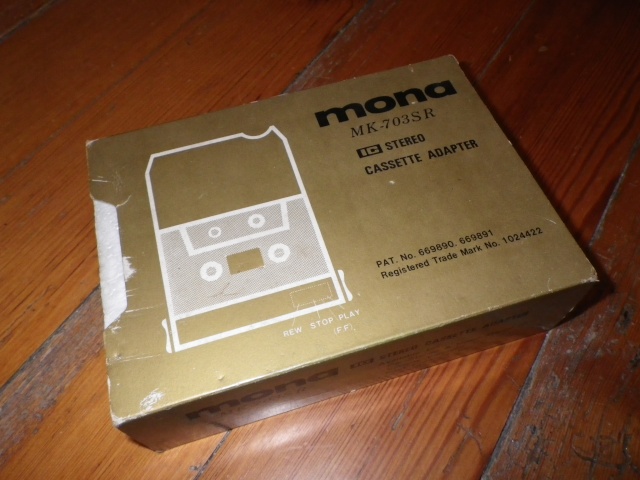 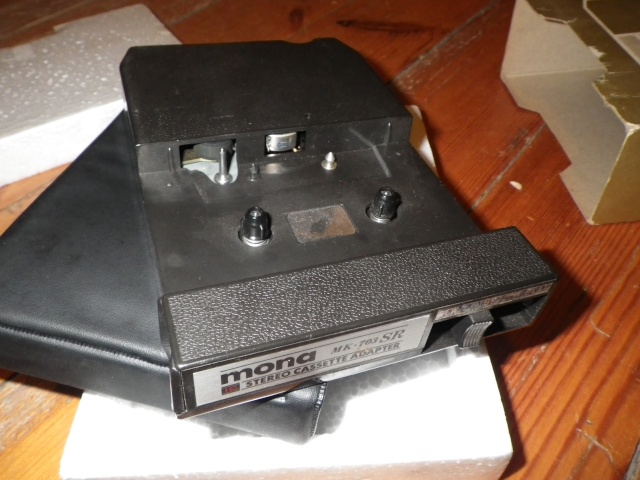 I tried the 8 track player yesterday. The speed doesn't seem tho be very steady. First, it changed over track very well automatically, but later he stopped doing that and remained on the same track until I changed it manually. What could cause all this?

Nice tapes. Make sure all the pressure pads are good or else they won't sound right. Also make sure none of the pinch rollers are melted. You may also want to replace the foil splice in each tape.

Does it not change automatically with every tape or just one tape?

For the speed issues, I would first check the belt, make sure it isn't loose or too elastic.

Those cassette adapters never really worked right, the speed was always off. The only ones that worked well were the adapters that took batteries and had their own motor.
_________________
-Jacob

This one has got a battery and its own motor.

I think it's with every tape now that it doesn't change over. I'll do some more testing during the WE. Thanks for the tips.

You got one of the good cassette adapters then.

Does it switch when you hit the program button on the player? If its not switching at all, I would make sure the solenoid or cam actuator lever isn't stuck.
_________________
-Jacob

Yes, it does switch over manually with the button.

Find the switch that starts up the player and take a screwdriver and short the program switch contacts in the tape transport.
_________________
-Jacob

On some cartridges it changes over ok and on some it doesn't. But the sound is not the best. I think the speed varies a lot and I know Jimmy smoked a lot but on this player he's got defifitely serious stomach problems. Also, electronic music like Jean Michel Jarre's "Oxygène" has a constant irregular vibrato and is too slow: no good at all.

So I bought another 8 track player. Found one nearby. It's a VOXSON SONAR 8. 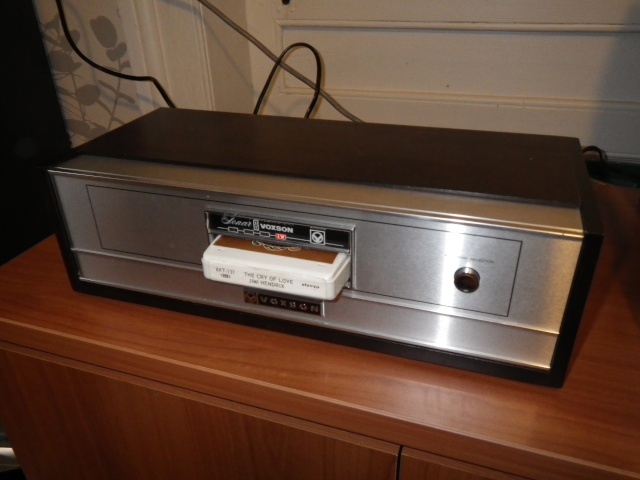 It's Italian built and weights as lead compared to the Taiwanese player. The seller advertised it wasn't tested so I could expect some problems. And yes, I plugged it into the mains and put a cartridge in. I was suddenly surrounded by no sound. No motor humming, no track lights, no track change over. This looked like a power supply problem. I checked supply cable and fuse, all were ok. Then I found loose wires on the tension selector. After soldering, it was again as good as new.

Cables were then connected to the amp, and, boy, what a difference in sound!! Vibrato gone, changes track automatically every time, better sound all round.

Now, at the back, it has the following: 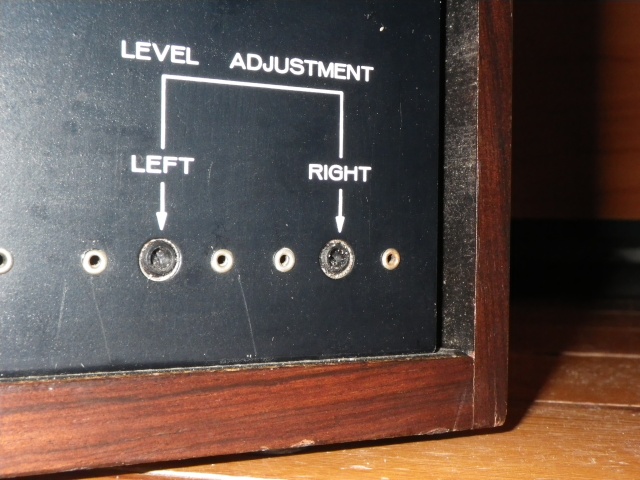 And on the bottom there's this: 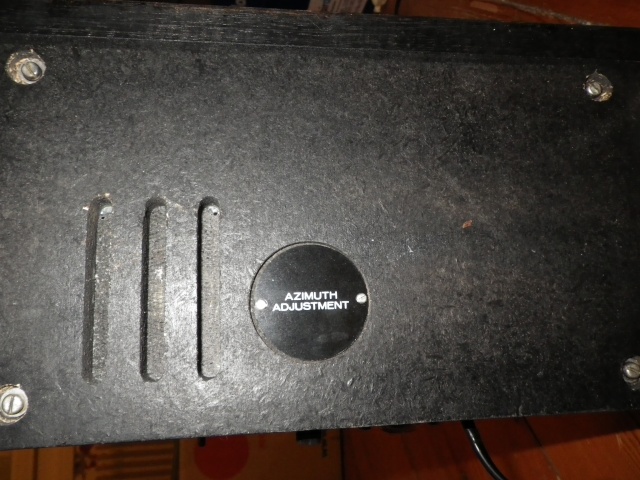 What would all that be?

Jacob would know for sure Lieven.. but I would have to assume that both; the level and azimuth adjustments are directly related to the tape head. If the player sounds good to you, then neither need to be touched. That machine looks to have been a higher quality commercial unit.

I haven't been following this thread closely.. but do you have a tape-head demagnetizer? They're as rare as tape machines are nowadays.. but if you don't have one, and happen to see one somewhere... grab it. The better ones are a "wand" that plugs into your AC mains. You use it after several hours of "play/record time" on any of your tape machines (reel, cassette or 8-track)

WARNING: move ALL of your tape cartridges/reels out of the immediate area when using a demagnetizer, to avoid erasing whatever is recorded on them. 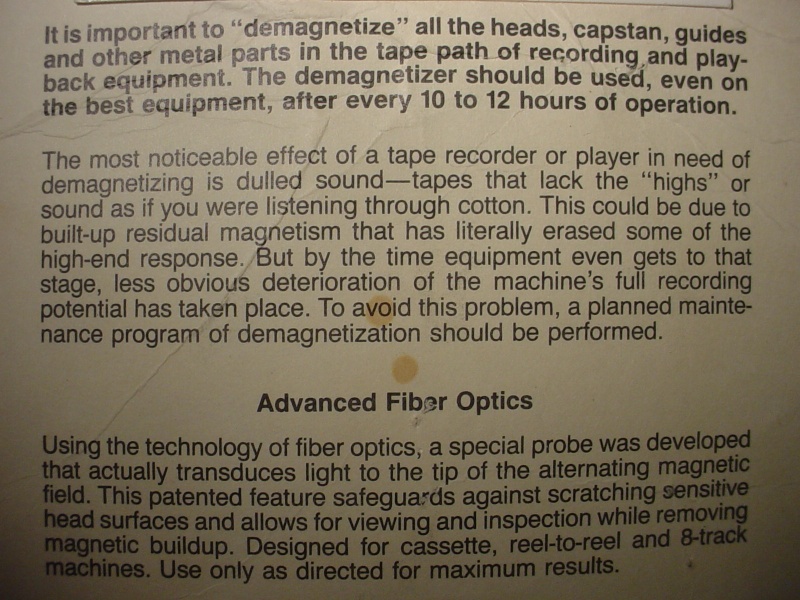 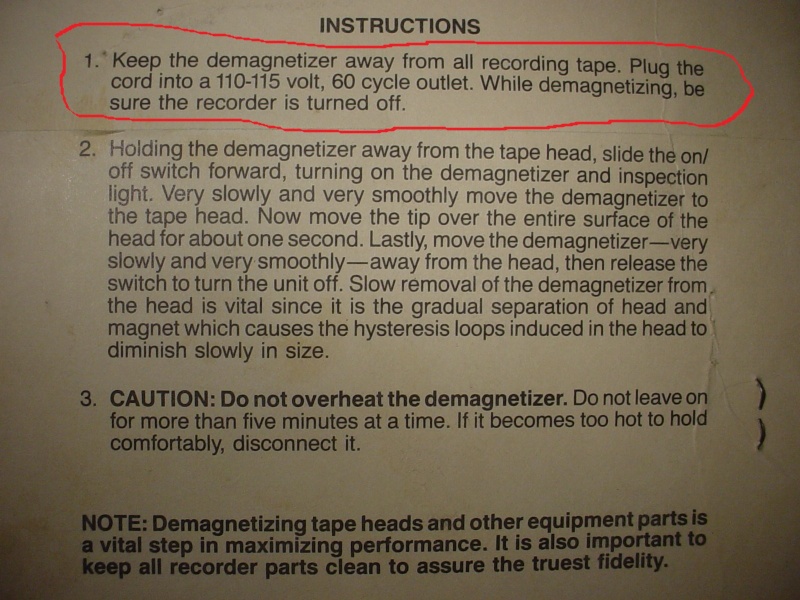 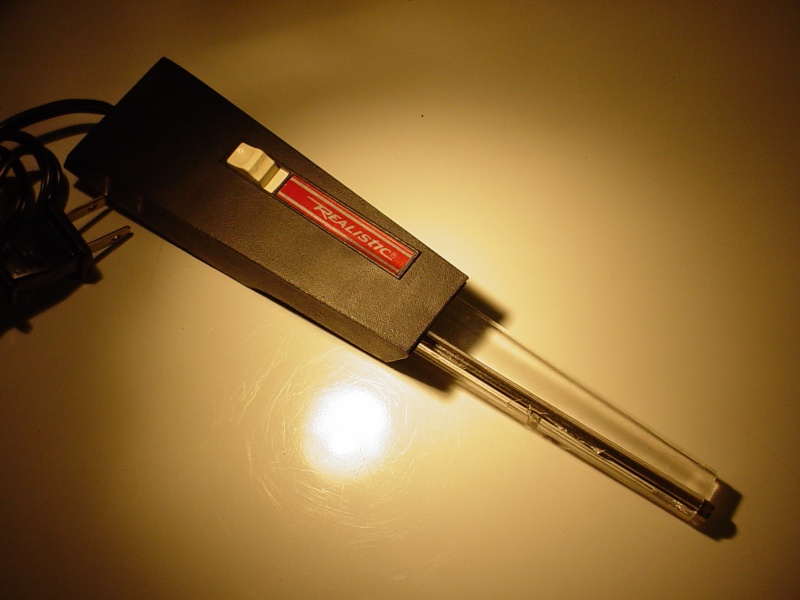 Thanks Roddie, I've never seen one of those demagnetizers. I'll see what Jacob says about the adjustments.