Well, as Y’all know, my brain tends to bounce all around.  I was doing a quick perusal of eBay, and I ran across a needle valve assembly for a Testors .049 engine.  That reminded me that I needed to replace a needle valve assembly on an AMF Wen-Mac .049 engine.  The assembly on eBay would probably work, but it cost about $10 with shipping.  That’s more than I paid for the engine, I think.  So time for a different solution.

Having so many Cox spares, it seemed like a no-brainer to try and fit a product engine spray bar on the thing.  So, I went ahead and pressed out the spray bar assembly from the needle valve side as was posted in an earlier thread.  I don’t remember who told me that was the way, but I remember giving him a greenie at the time.  The spray bar popped out with a quick application of a large auto center punch (one of the three best tools ever invented).  The needle is quite strange.  It has no taper to it.  It is not snapped off on the end or anything, just non-tapered. 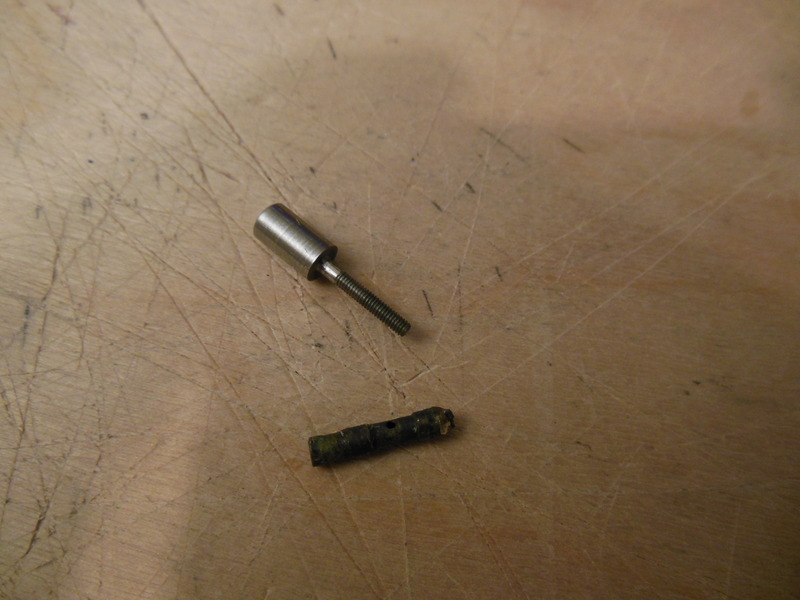 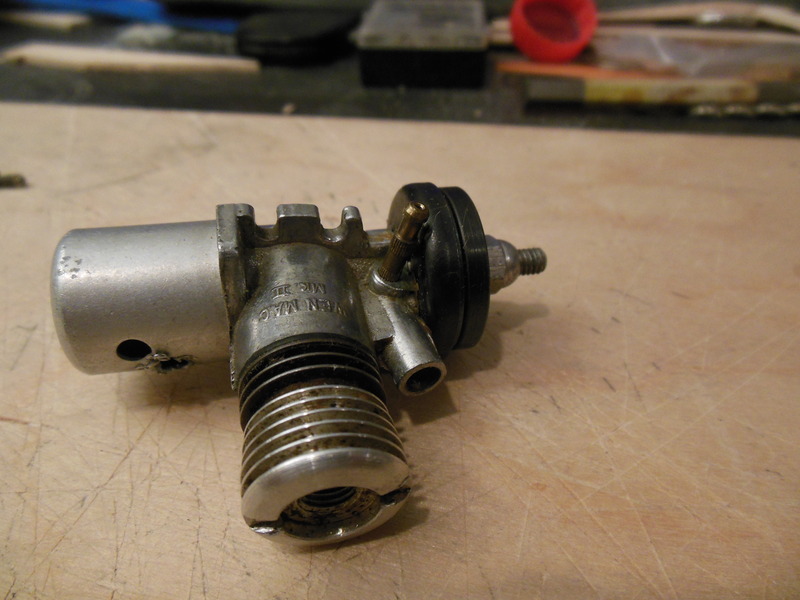 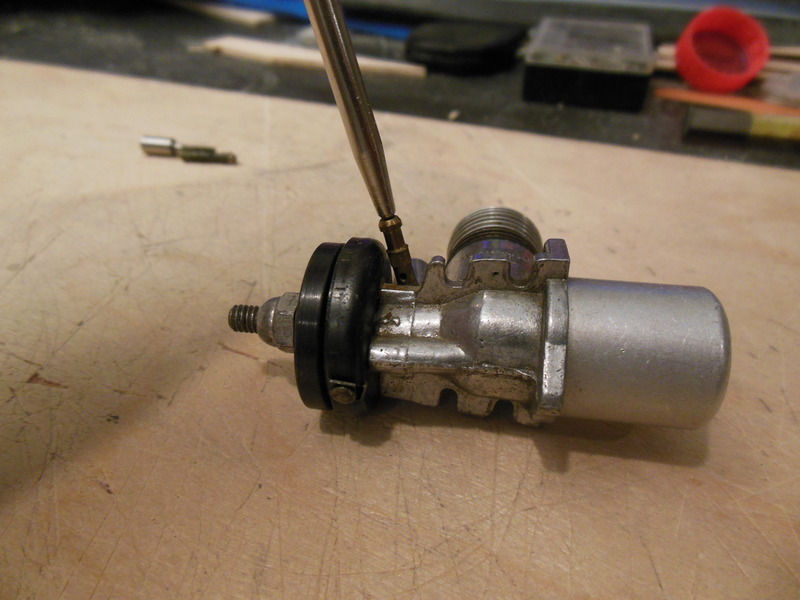 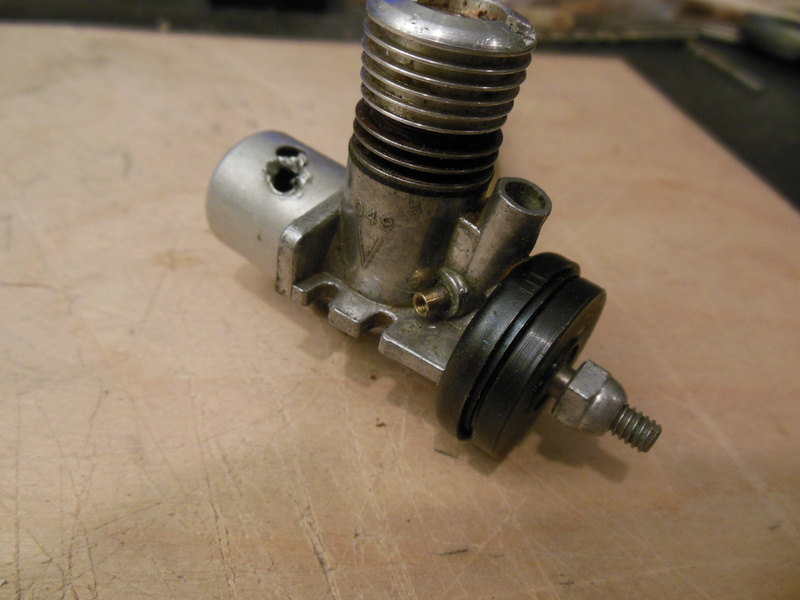 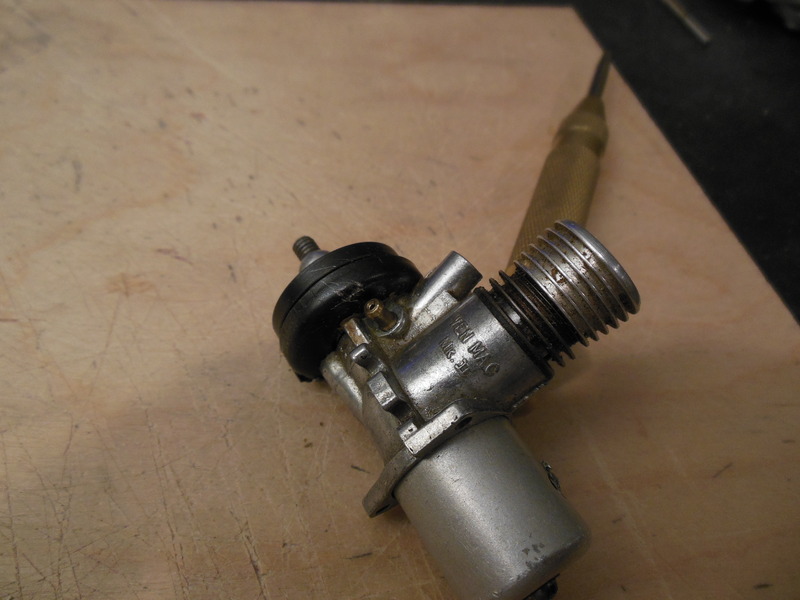 Then I grabbed a needle valve from the spares box and voila! 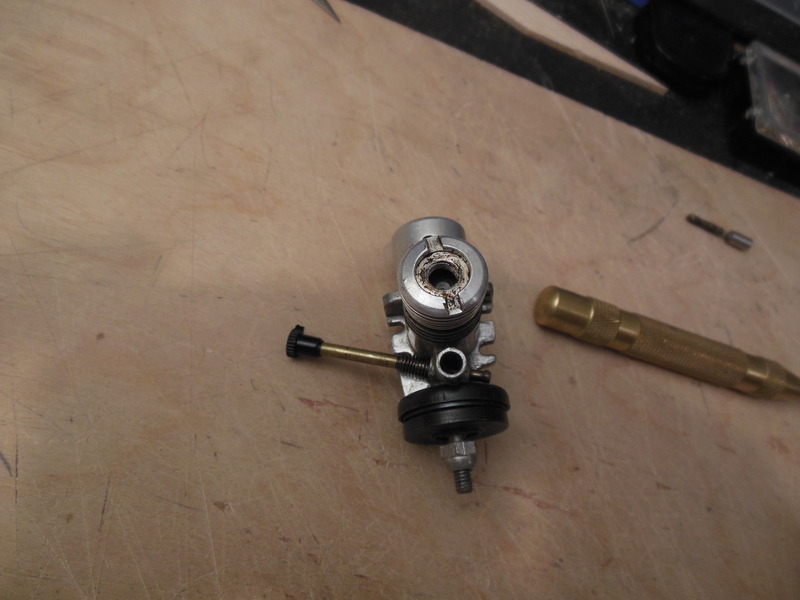 Uh, oh.  Maybe the needle valve is a bit too long.  So, I dug around until a found a N.O.S. short needle valve still in the package.  It even had the little plastic seal to prevent leaks.  I trimmed that to fit the engine, and installed the short needle valve.  Voila!  Really, voila this time. 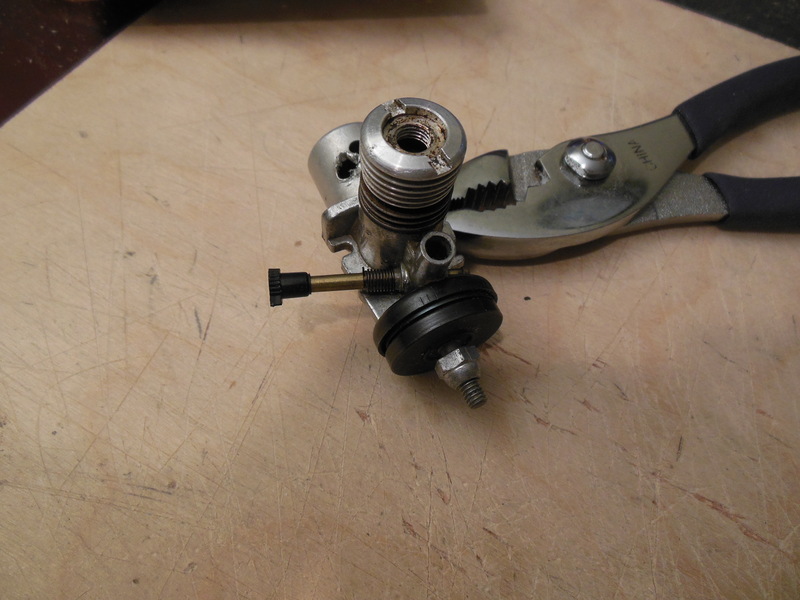 I’ll try to make time tomorrow and see if I can get the engine to run.  I’ve never tried to run this particular engine before, so hopefully it runs nice.  Either way, I now know that a Cox spray bar will at least fit in a Wen-Mac for future reference.

The only problem I can see is that the larger diameter Cox spray bar may restrict air flow a little. It will certainly improve fuel draw.

Yeah, ain't it great, spraybars are so adaptable if they;re anywhere near close.With a wider one, you may be slightly down on power, but maybe not even significant. But you may be able to turn it down in the center section by .003" without breaking through if you have access to a lathe. I don't but I have a club member that does that sort of work. Coxes are so available, I'd even try it in my drill press with sandpaper, taping off the area to be thinned.
Rusty
_________________
Don't Panic!
...and never Ever think about how good you are at something...
while you're doing it!

Yeah, I was hoping that the .003” difference would be within the manufacturing tolerances of the venturi, but it could have an effect on the airflow and speed.

I put the engine on my stand and looked for a glow plug.  The only new plugs I had are a couple of Fireball idle bar shorts.  I tried that, but the plug wasn’t manufactured very well, and was leaking pressure out the top of the plug.  So, I grabbed the plug off of another Wen-Mac and used that.  I got the thing started and peaked, but only got about 14.5-14.6K using a Cox 5x3 Safety tip prop and SIG 35%.  That’s fair RPM for this old engine.  Fair Bee RPM at least.  An APC prop would probably do better.


But, how does that compare to a stock needle valve?  To get an apples-to-apples comparison I mounted up a Wen-Mac engine of similar vintage without the recoil spring housing.  Close enough for comparison.  I used the same plug and prop to get as close a comparison as possible.  On that engine, I only got 13.6-13.7K RPM. 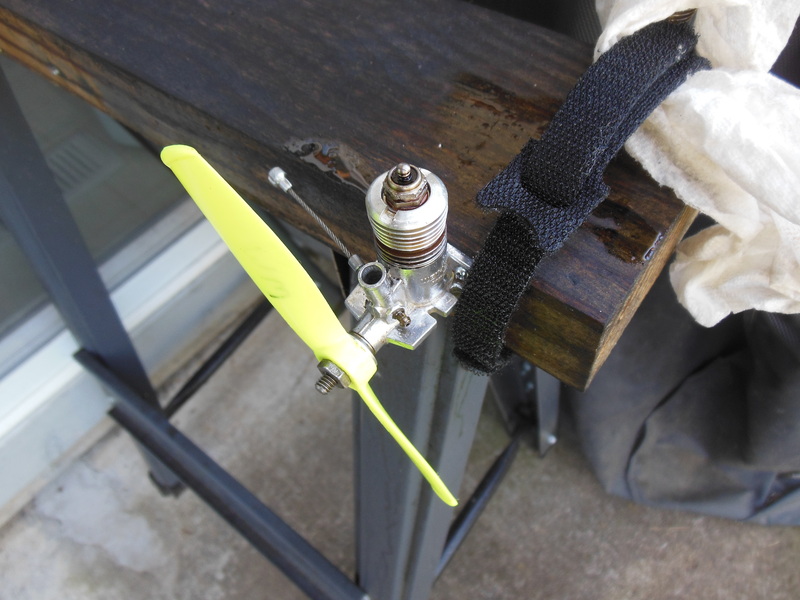 Does that mean the Cox spray bar and needle is better than the stock setup?  Is the reference engine a good example of a Wen-Mac .049 of that vintage?  Or are both engines crappy?  Who knows.  The test has certainly shown three things:  1) An APC prop is probably what I’d use if I put these things on a plane to fly them.   2) You can use a Cox spray bar in a pinch if necessary.   And 3) I need to lay off the cookies…

So, another little experiment is in the books.  Now to oil up these two Wen-Macs and bag them up for future use.  Then on to the next project (or finish one of the other ones in progress ).

Good Deal Mark , I have a couple broken back plates that I need to remove valves for other engines ,, What is that tool in the first pic with the extracted valve ? What kind of cookies ya chewing on ? I like lemon Oreo , pecan sandies , stripes , Ect .

@getback wrote:What is that tool in the first pic with the extracted valve ?

The shuny aluminum cylinder with the threaded rod in the center? That's the needle valve that was on the engine.

Thanks for the story and video Mark, I enjoyed watching it run. I have a few of that style engine and I run them once in a wile. Thats about the performance that I get out of mine, 14-14.5k with a 5x3 prop, but I get that with 20% nitro. I wonder if you have reached the point of diminishing returns at 35%??
Phil

that was the very intertaining Mark. Nice Job

Hey Mark- that's great what you've done, a new hybrid: CoxMac or WenCox ? Looked to me that anything would have been better than what was on the engine to begin with. Most of of my WM have the "standard" twisted wire needle valve with a nice taper and fairly good adjustments. Going back a few decades, it seems we use to "port and polish" the intakes on our hot rod engines. I wounder if you could do that on a smaller scale to the WenMac intake Venturi to compensate for the .003" in difference for the spray bar....more air, more fuel, more rpm? Then add fuel injection, put one of Rusty's bladders on it, think that"ll get some more speed out of it!

Mark, could you show or describe the backplate the spray bar came from? Or are they all the same? I have a engine with a pipe bomb nva in it and the fuel draw is poor. I may want to change to the cox part.
Phil

@chevyiron420 wrote:Mark, could you show or describe the backplate the spray bar came from? Or are they all the same? I have a engine with a pipe bomb nva in it and the fuel draw is poor. I may want to change to the cox part.
Phil

Thanks for the compliments, Y'all

Phil, it's just a standard spray bar from a product engine.  I had one loose from putting a postage stamp fine spray bar in a red backplate from Bernie, but I don't remember where I put it.  The one I used came from this lot of 10 spray bars I got on eBay.  I ordered them because you never know when an idea will come up that you need a couple of extra spray bars for...


The Ahead Thinker Mark

Bump.. Good thread! I don't have an automatic hole-punch, but I've used them..... and removing/re-setting a spray-bar seems like a great application for one.

Nice old engine-run Mark. The credits at the end of the vid are classic! Rusty said that he recently ran some 35% GlowPlugBoy fuel in his Cox Tee Dee (I think..).. and saw a marked performance over other similar fuel blends. Did you get around to trying an APC prop?

I don't think that the .003" oversize spraybar is anything to be concerned with. You know how engine's can be.. you can see increases in performance with the oddest of mods.. and propeller technology has improved since that engine was designed. Like "Rod" said; the engine might draw fuel better on a suction feed. I've heard about the insulator leaking on some glow-plugs.. I guess it could theoretically happen with "any" plug.. and should be one of the first trouble-shooting switch-outs if you're experiencing poor performance.

There must be a model kit sitting in that HK warehouse 10 mi. away.. that you can mount that engine on... 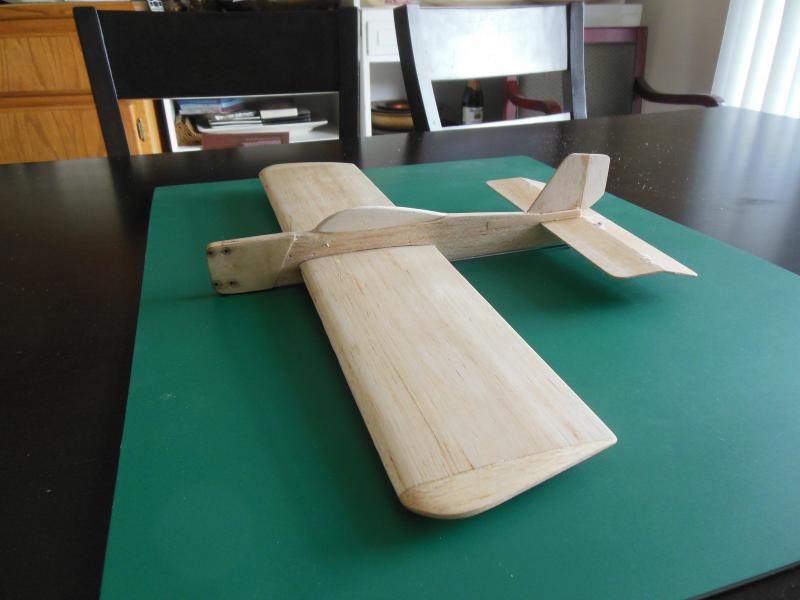