Just a little update on my super clown ARF. Now before I get started here I need to say that I haven't been able to take any build pics of the kit. This is due to me misplacing my dang camera.

I received the kit about a week ago and started assembly within the last few days. first impression of the kit was good the only issue was wing damage which looked to be caused by excessive shrinking of the covering since the wing had a pretty impressive horse shoe warp in it so I called up Brodak and they told me that they would send a new wing out ASAP talk about great customer service! So, while waiting on the new wing I decided to strip the damaged wing to take a look at the damage and to see if it could be salvaged and when the covering came off, the wing straightened out so i proceeded to inspect the wing and found the only damage to be a cracked LE and loose ribs also the tip weight was loose as well "easy repair" I also touched up the rest of the glue joints just to be safe also inspected the bellcrank and leadouts, leadouts are of the crimp type btw and not very impressive Crimps look like they were done with a set of wire cutters. I put a dab of epoxy on the crimps to help retain them and then recovered the wing in white MonoKote.

Assembly:
Since the wing repair was easy and straightened out well I decided to use the repaired wing and keep the replacement as a spare.
The manual while adequate with lots of black and white pics was somewhat unclear however the assembly looked straight forward. First on the list was to check, seal the edges of the covering on the fuselage which is a solid 1/2" laminated unit made up of two pieces of 1/4" balsa sheets and fuel proof the business end of the fuselage with thinned 30 min epoxy. Next I cleaned out and fuel proofed the holes for the LG with thin CA and positioned and drilled the holes for the engine which will be "for right now anyway" my Fox .35 (Yeah I know it's a shaker but hey its a way to get some time on the engine for my RM which will be next after this build) I also drilled another set for the little OS 25 as well so to make engine swaps easy. The next step is the wing and this is where I ran into a little fit issue, upon test fitting the wing, I noticed that the fit was excessively loose in the fuselage so I removed the wing and after measuring and removing the covering that will form the glue joint, I attached two strips of 1/16 sheet balsa on the top and bottom of the wing and took a sanding block and sanded it to fit then used 30 min epoxy to attach the wing and blocked it up to set. Now this is where things get interesting, well since it has to sit up over night to cure I left the room for the night but forgot to completely pull the door too and sometime after i left, my dog gets in the room and knocks the table with the curing SC on it causing the model to fall off the blocks and the fuselage migrated off the center of the wing and set up that way GRRR. To make a long story short I had to CAREFULLY cut the fuselage free which was quite difficult and of course it also tore the wing up so I repaired the wing the best I could and re-glued it back in place and re-blocked it back up and this time closed the door completely to let it cure. Next day I recovered the section damaged by the doggy indecent and while not the prettiest looking thing it still will do what I need it to do and it's gonna be a basher anyway so I wasn't planning on doing a top notch job to begin with. After getting the wing finely squared away, the next step was the tail. Manual calls for positioning the horizontal on the mounting pad and using pins to lock it in place, I've use tape for this step most of the time so that's what I did and measured out the center and alined it it then using medium CA attached the tail fethers.

This is where I'm at right now, I will update this thread as i progress and hopefully I'll find my camera and some pics will follow.
This is just a simple review on this kit and I will do a complete and detailed one later once i get done with the model.

Take care everyone! and stay cool in this 100+ degree heat!

You are a better man than me. I would have shot the dog!!!

Still though, glad assembly is going well. The Fox will shake, just keep the prop balanced and mount it hard onto the bearers. If you can use aluminum pads all the better.

TD that took me a few to read because I love reading the next post first if its long ,,, and I Laughed for 30MINS>efore I could reread ///// Ron I am glad your not my veteran !!

and looking foreward to the update Bandit (( let yer smoke )))That Fox should do the trick...

Ok here's the Mostly finished model not the prettiest due to the white wing but will do lol it still lacks the tank (haven't decided on what type to put on it yet) fuel filter, and lines. I also still have to put the decals on it, This has been one interesting build. 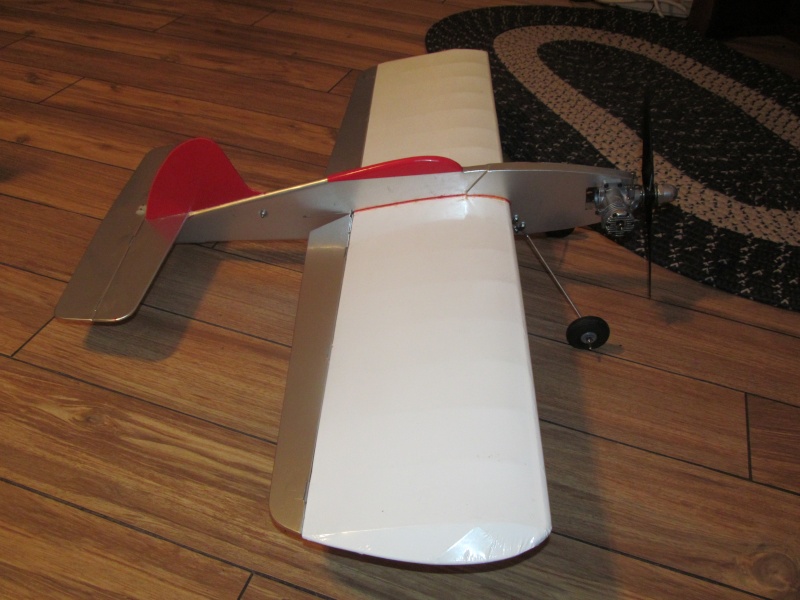 Here's a side view I think after i put some more detail on it, it will look better. Ground clearance is going to be close, may try a 9" three blade prop later. Also need a tongue muffler due to my fields muffler requirement. 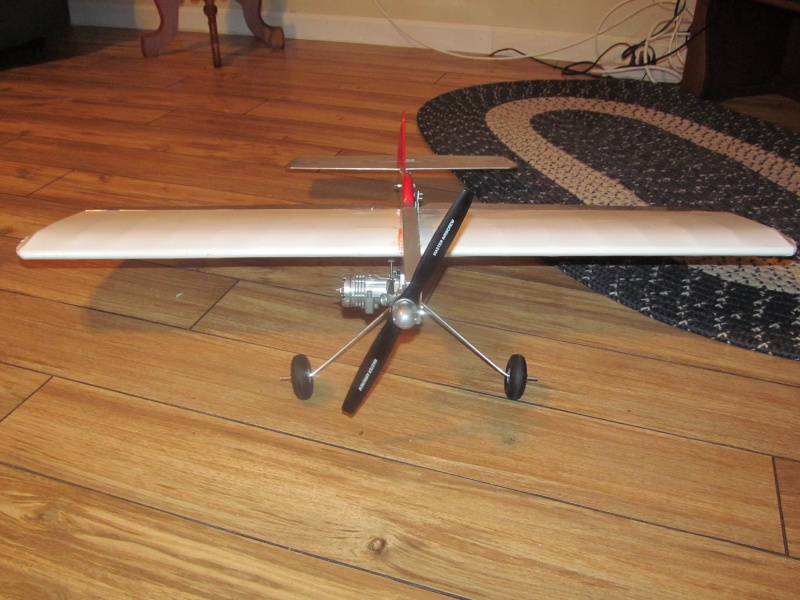 and now a front view...More to come! (Bandit)

Looks good to me, I pictured a big mess from what you described.

You shouldn't have a prop clearance issue, what size wheels are you using?

Cribbs74 wrote:Looks good to me, I pictured a big mess from what you described.

You shouldn't have a prop clearance issue, what size wheels are you using?

Oh believe me it was a mess I tanned the hide of my dog for this and he's still hiding lol. After the RE-repair of the wing I re-covered that one wing panel that was damaged again from it setting up off centered. Before the recover it was Ugly, pulled up the center sheeting and damaged three ribs. had the re-sheet the center section and repair the three inboard ribs.
Aside from this one build being jinxed, the wing has turned out stronger from this ordeal and also I have learned what to look for with the Brodak ARF's if I build another one that is, I prefer to build, in fact if I do another one I'm going to get the ARC not the ARF. The wheels are 2 1/4" dubro's slightly larger than the one's that came with the kit. Anyway I think you're right it did turn out pretty good considering