» question: gas powered cox or other 1/2a engines using the OS G5 plug
by gkamysz Today at 9:36 am

» Tarno carb operation
by OVERLORD Today at 8:55 am

» What are the differences (if any) between Cox .09 TD and Medallion pistons/cylinders?
by getback Today at 8:17 am

» Jerobee electric to glow conversion nr 2
by Cribbs74 Yesterday at 11:01 am

My brothers neighbor gave this, looks like an old one to me. Can anyone enlighten me? 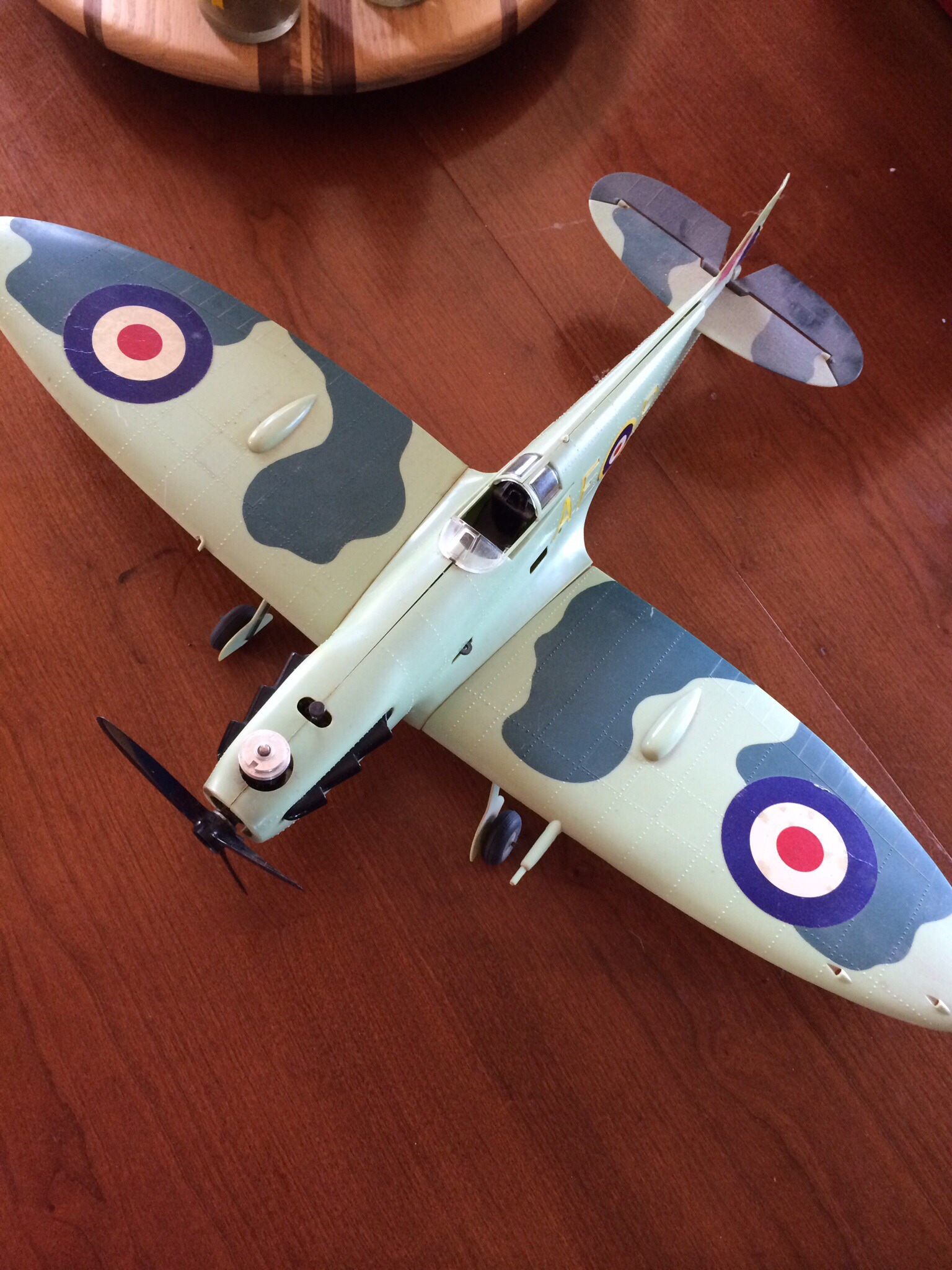 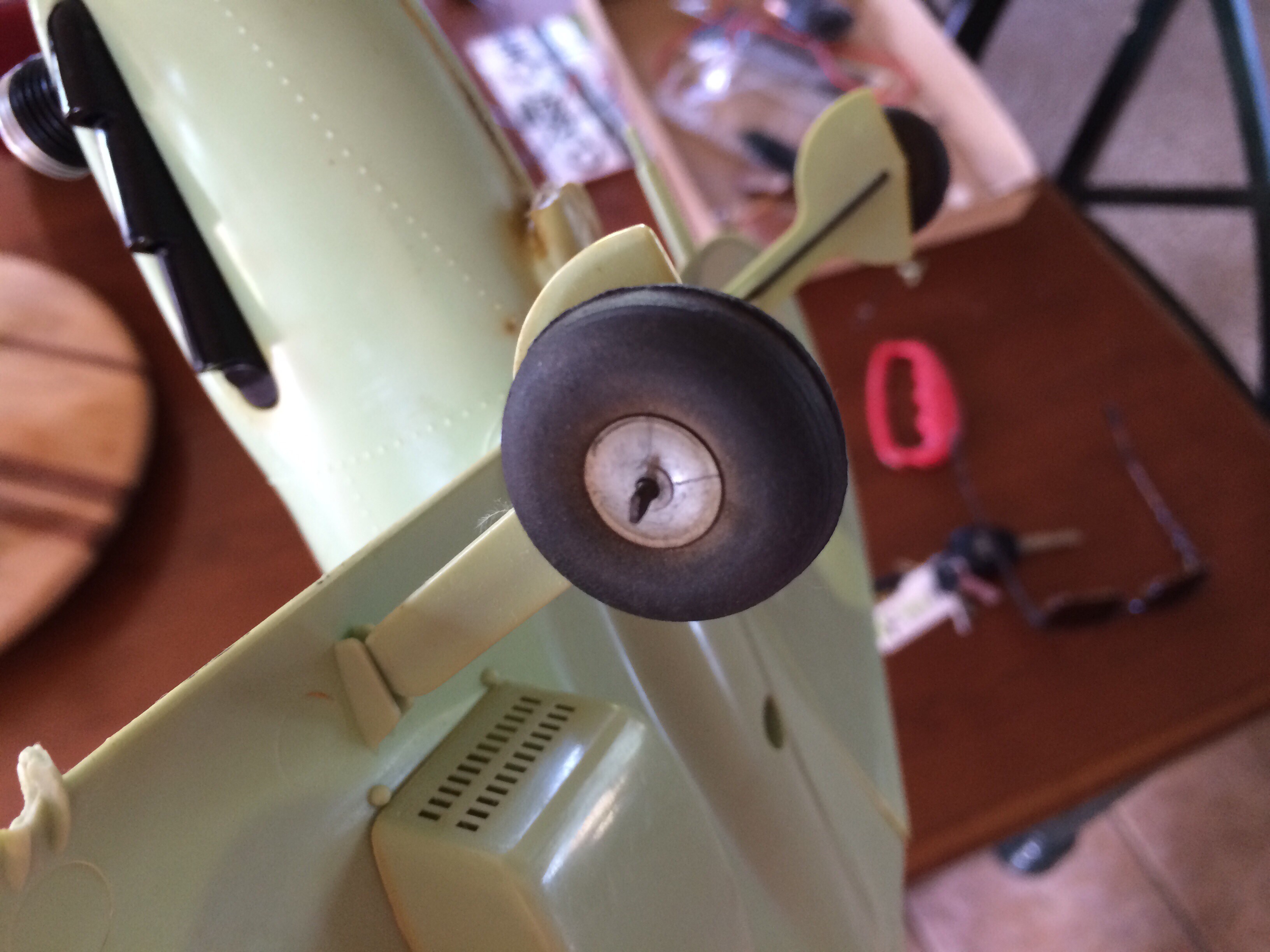 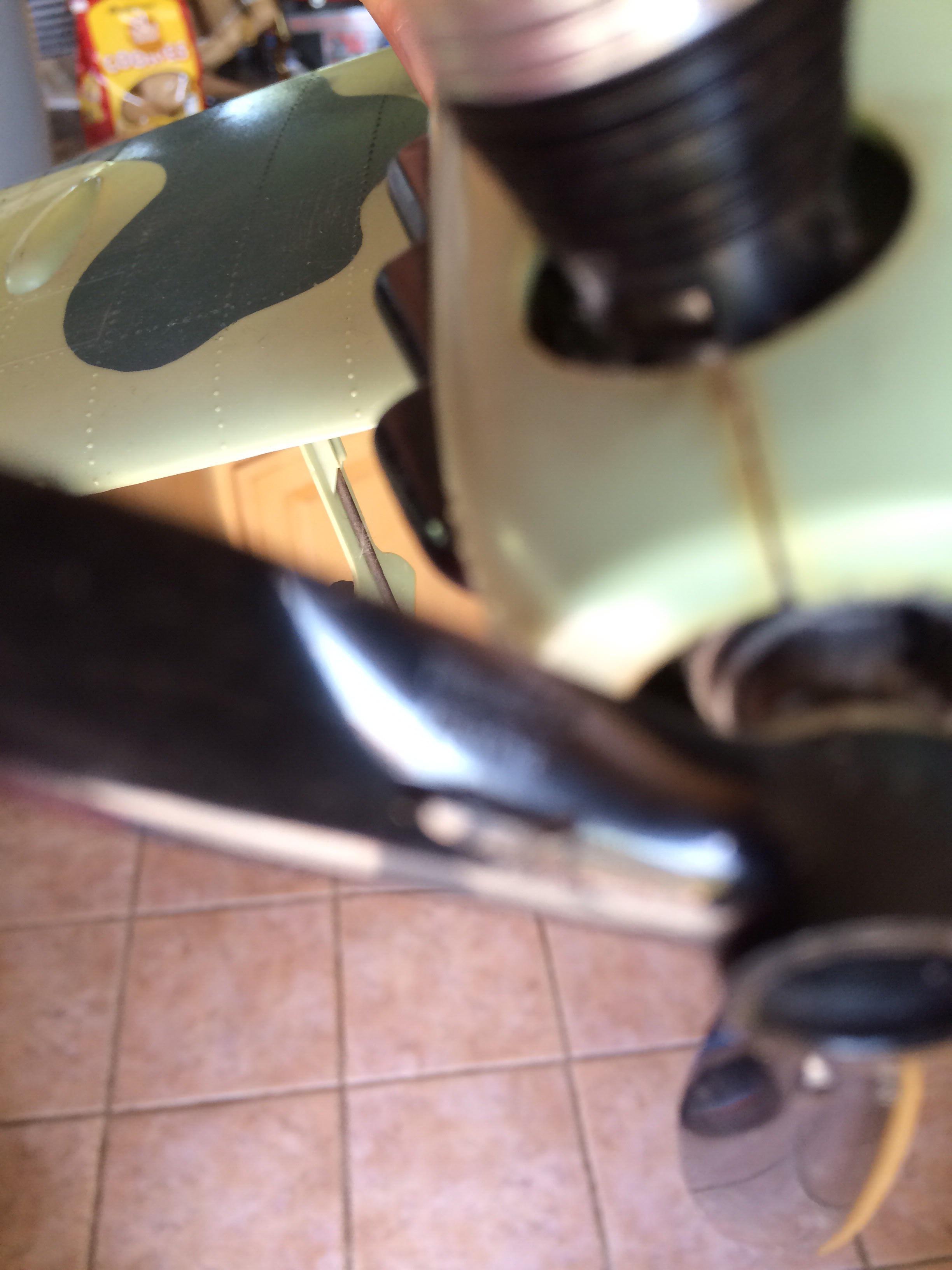 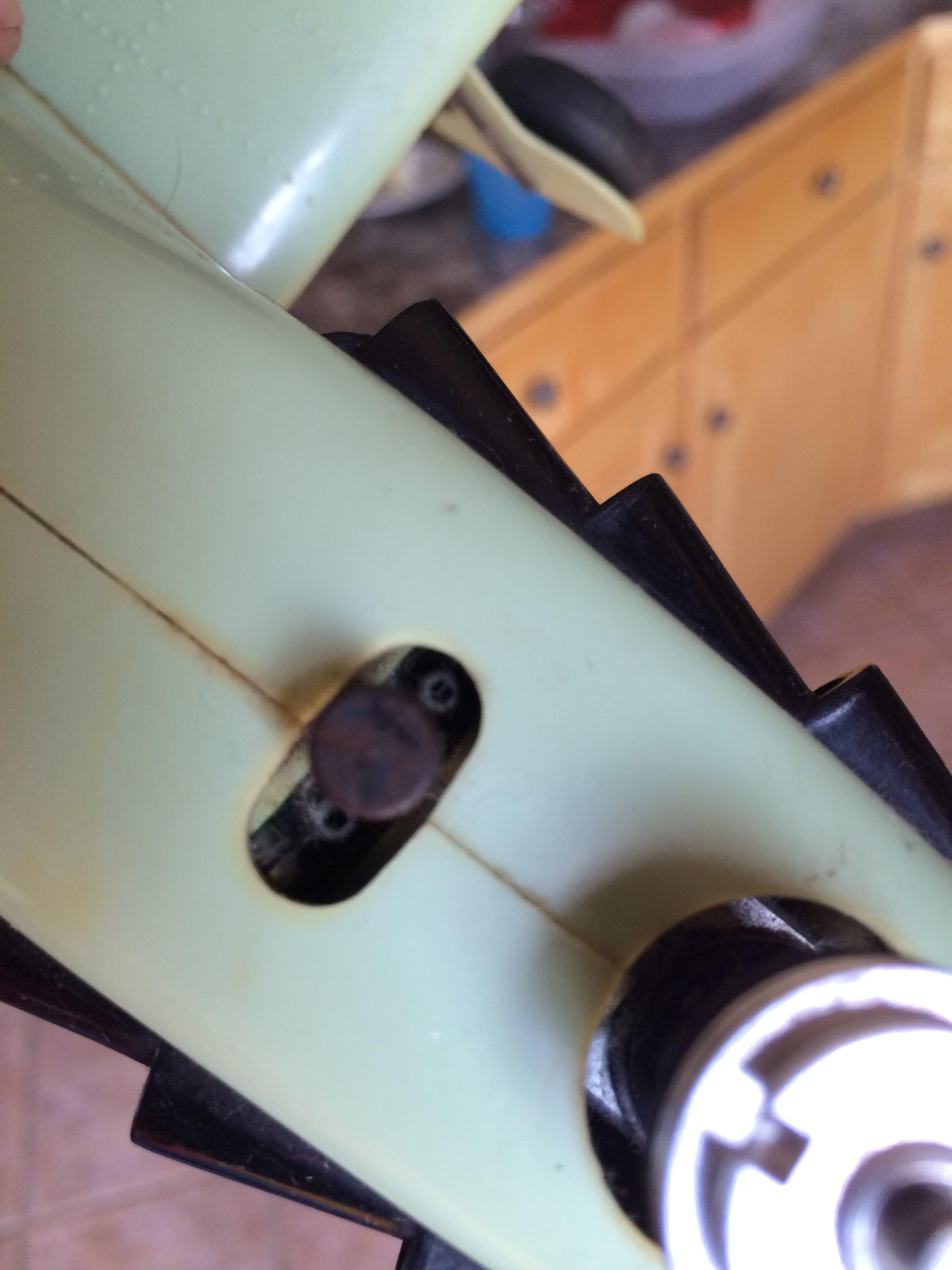 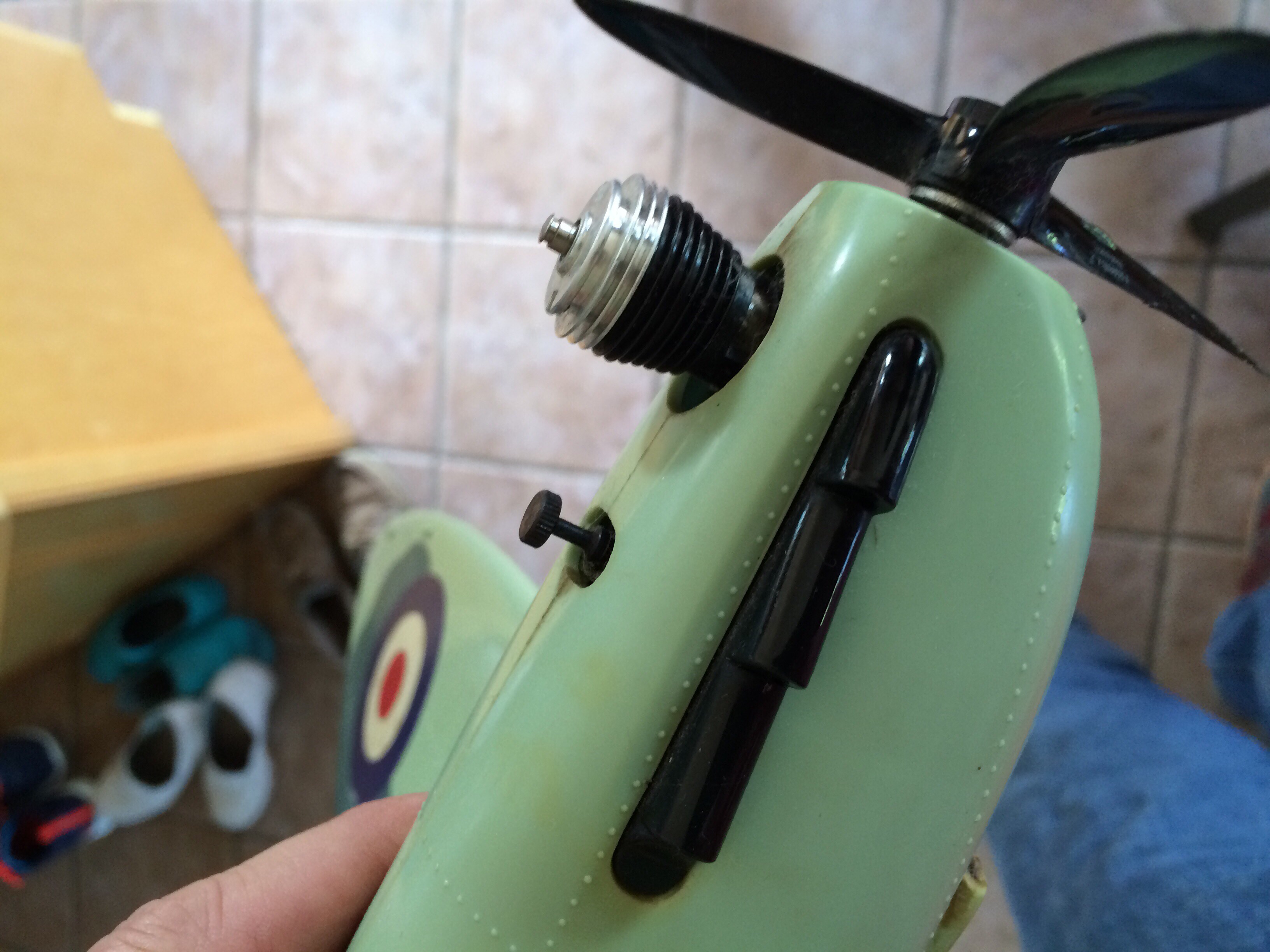 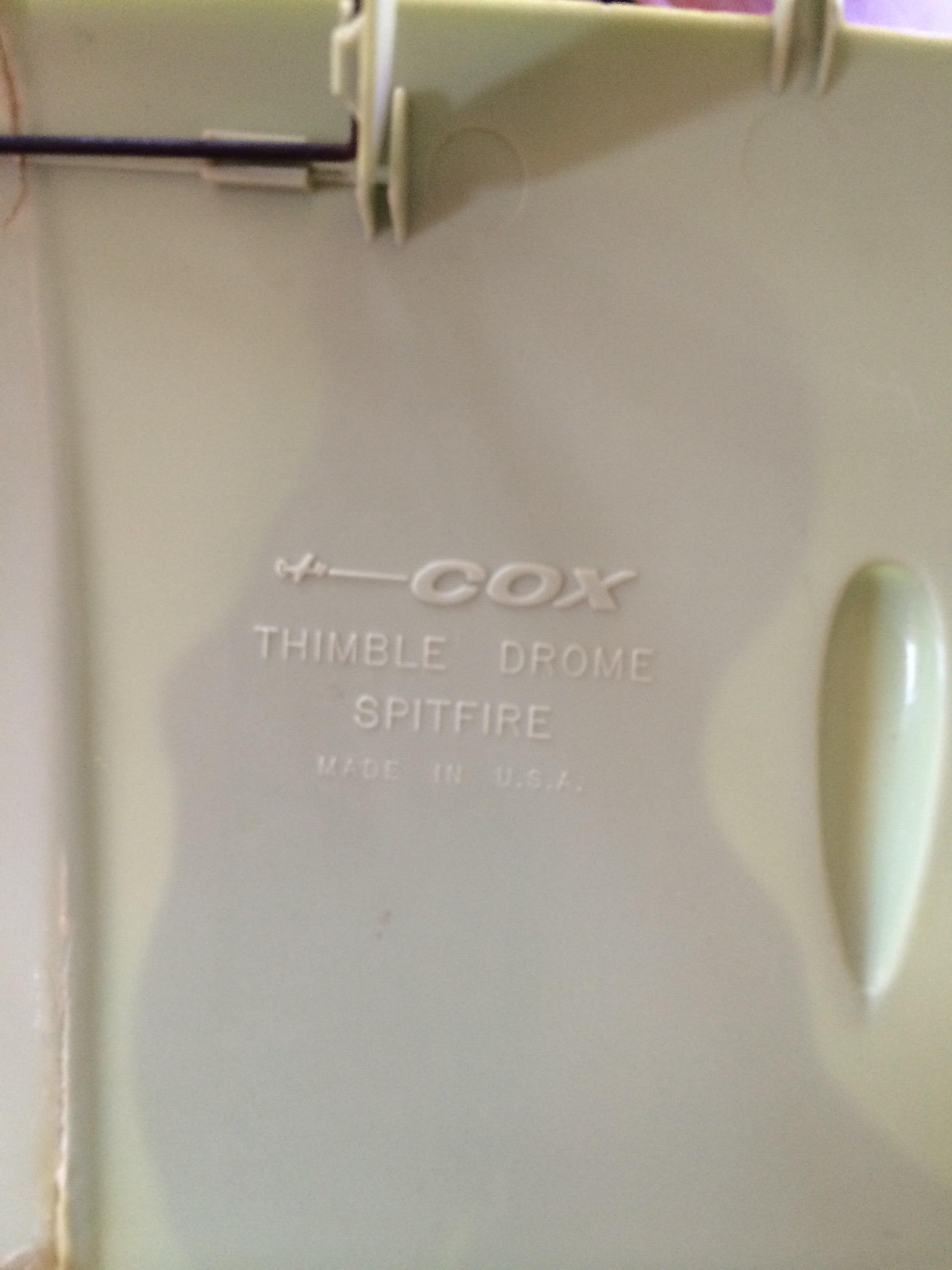 I do know it was made from 67' to 68' with the green camo and it used the silver bee engine, hope this helps

[quote="JPvelo"]My brothers neighbor gave this, looks like an old one to me. Can anyone enlighten me?

We all need more neighbors like that!!
See if this link works:   http://www.mh-aerotools.de/airfoils/cox_frameset.htm

That'll take you to the main page, click on Models in the left hand side and then search
Description:
Silver Bee engine, “AF P” on fuselage sides.
#7862: with starting and flying accessories

And the big question is are you going to Fly it or Frame it?
One of my favorite & best flying R/C planes is a Spitfire. Graceful & responsive in the air.
Whichever you choose congratulations on your newly received treasure

Correction, the light green Spit was introduced in '64 and only made for two years, it's considerably more collectable than the more common dark green version. 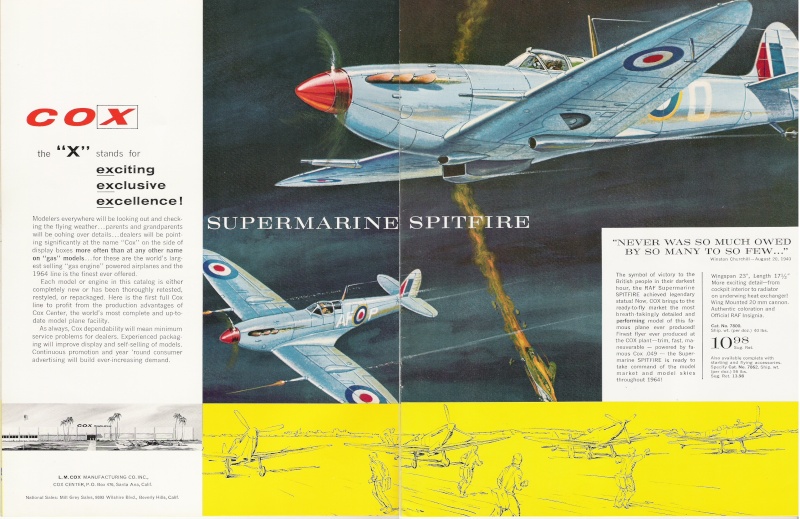 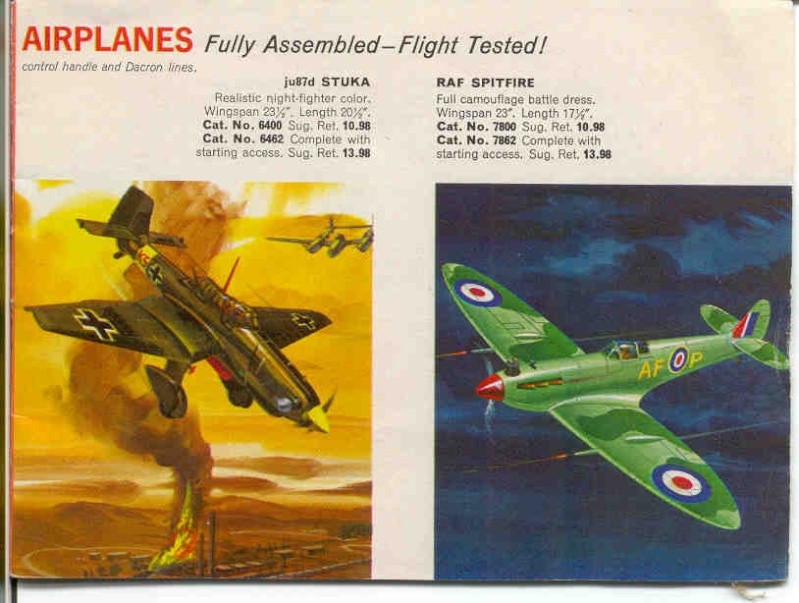 What an awesome score! Congrats Jim!

Indeed, brings back memories, thanks for sharing.

As an 11 YO, I received one as a Christmas present in 1965. This is one of the prettiest Cox CL RTF's, very well modeled by them. Engine was called the "Silver Bee". It had the Babe Bee tank back with nipples and the extended 8 cc fuel tank without the stunt filler and vent tubes.

I only had one flight out of it, scared as the Dickens when my father powered it up at the gun range in Biloxi, Mississippi. I stalled it and crashed it, but crash did not destroy it. I kept it for many years, and it disappeared somewhere along the way.

Especially novel was the soft sponge tires. It was what I would consider a deluxe plane. I guess it cost more to manufacture and thus was discontinued due to less than stellar sales over other Cox entries.

I too was 11 in '65. I can remember as a kid wanting "American" airplanes, I had a Bell Aircobra & a Skyraider. If other kids followed the same train of thought that might explain why this beauty wasn't a big seller, at least here in the US.

I still want to know if you are going to fly it!

I have to ask because if I were in your shoes I truly don't know what I would do. I think I would hang it from the ceiling 'till I couldn't take it any more, then.....

I'd recommend instead to preserve it as a keep sake since it is so rare, or perhaps make a little money on it and sell it (YMMV). Instead, build a balsa Spitfire either profile or full fuse, and fly that. Balsa flies much better and stands up to crashes better, too.

Just re read my original post and realized its a little confusing. The model is my brothers, not mine. I advised him not to fly it. He stores it under a cupboard so I think it's safe to say it won't get airborne.

JPvelo wrote:Just re read my original post and realized its a little confusing. The model is my brothers, not mine. I advised him not to fly it. He stores it under a cupboard so I think it's safe to say it won't get airborne.

Yea.. I kind of wondered that. I just figured that he'd passed it on to you. Is your brother a flyer too? If not.. it's quite a coincidence that he'd be given a vintage Cox flying model!

Grab a red spinner for it and hanger up!

Yep, as a kid i think i kinda liked 'Merican planes as well! Probably why Cox built only one German, one Brit and no Japanese!

Mark Boesen wrote:Grab a red spinner for it and hanger up!

Yep, as a kid i think i kinda liked 'Merican planes as well! Probably why Cox built only one German, one Brit and no Japanese!

they made 2 german! and 2 brit remember the sopwith camel an the red baron

The Red Barron was actually a Pitts, i guess i was thinking more of the 60's planes, but your right, you can also add the WWI Camel and the D-7.