With this very cool design I don't see any good way to use a bladder...from a filling and starting perspective

I would be tempted to Over prop the engine and add additional dimension to the counter rotating prop...more area/ thinking width of blades but perhaps just slightly larger diameter would do

Thanks for your ideas and suggestions.

I did another test today with a smaller prop to reduce the torque reaction. I mounted a 3 bladed Cox prop from the F15. 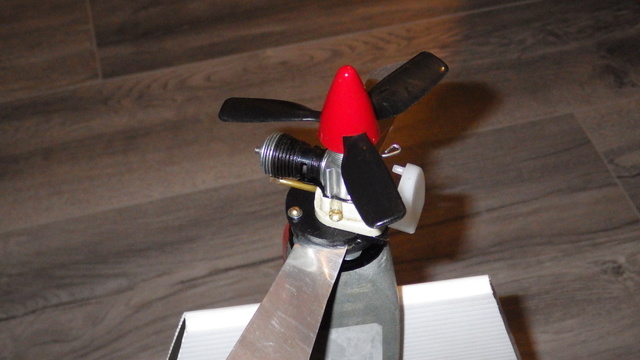 Unfortunately, I had the same results as before. The engine stopped as soon as it started spinning. During testing, I slowed down wih my finger the spinning action to see at what rate the engine would continue running. When the counter rotating prop spins at more than 3 or 4 revs a second, the engine stops.

A few times when the engine nearly died, I blocked the engine from spinning and the engine revved up again indicating that it is the excessive centrifugal force that starves the engine.

After all,  this engine and prop did not generate enough trust to lift the plane in any conditions.

It' a definite return to the TeeDee but with a round tank without inner baffles or bulkheads.

There has got to be a formula for this to fly. I know the cox helicopters take off and gain alitude....but they weigh ounces. Although the slow rotation of the larger counterbalanced blades may be the secret to success of a vertical take off.

crankbndr wrote:Heres one that just went off on eBay, though its not free flight. Fetched a nice piece of money too. 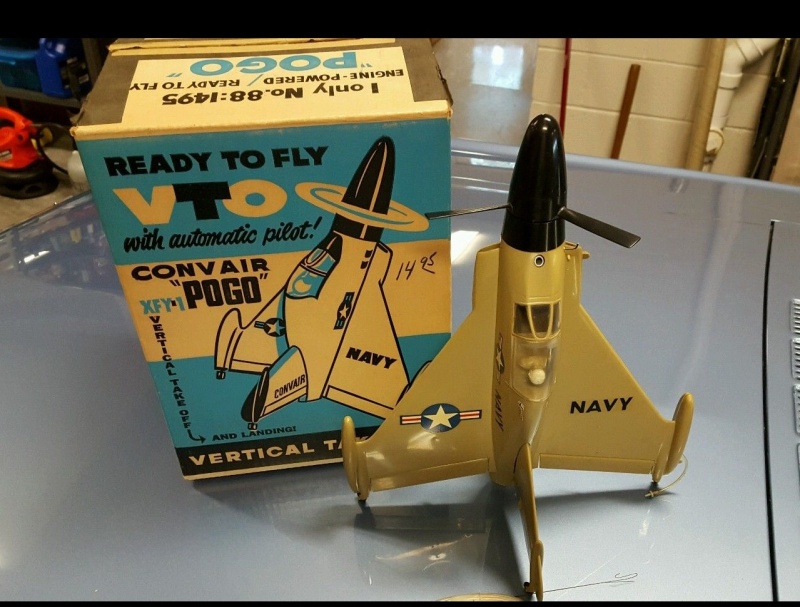 Matter of opinion of course but I would not consider it even if it were me who got the 90M€ Eurojackpot yesterday. But to each his own...

Back to the original subject, have you considered a larger rotor to reduce the spinning of the engine? Maybe copy one of the helicopter designs from Outerzone and then trim the blades gradually shorter til you reach the vertical flight phase too. One of the copter designs even had a possibility to trim for left or right turns, maybe it could be adapted for this model?

About 2 weeks ago, I got the plane out of my cupboard. I made a new plywood backplate and drew up templets for a 2 bladed prop as per plans and also for a 3 bladed prop. Then, I want to make a new tank, round without any baffles inside. The fuel suction pipe will go vertical in the centre of the tank and the TeeDee mounted on top and out of centre. At least, that's the idea.

I tried some more engines, also the Black Lynx with the tiny helicopter tank but every engine stops when rotating fast.

I ended up with removing the rotating counter prop part and cutting off flush the aluminium bearing tube. I bolted a tanked TeeDee on the nose. 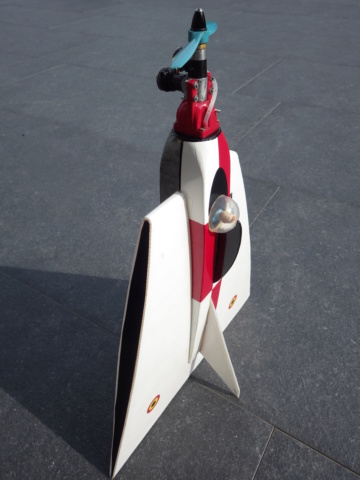 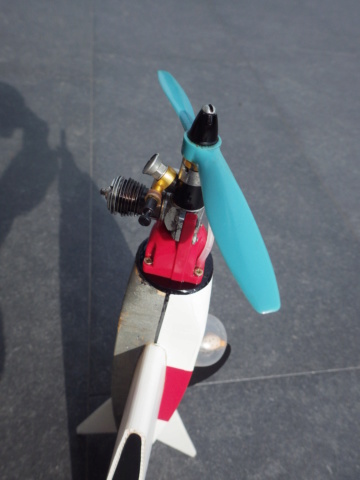 With the engine running and holding the plane vertical, there is enough thrust and you really need to hold on the plane well. Then, to move the CG, I stuck a aluminium strip to the trailing edge with sticky tape. The strip I used is 20mm x 1mm thick. The advantage is that this size weights 1g per cm in length. I used 20 cm which is 20g. There was still enough thrust with a running engine.

I decided to go to the field to see what the plane would do when launched. I hoped it would take off vertically in a sort of straight line but I suspected that the engine torque would disturb that! I let go the plane vertically with its belly towards me. Take off was great, then the plane turned 180° around his axis in a curve to become horizontal with the cockpit up and the cylinder down. The plane didn't go very far because of 2 reasons. The fuel outlet of the tank was now on top and there wasn't any wash-out on the wing tips. I managed to take a little video of which I took stills. It's easier to follow the movements that way. 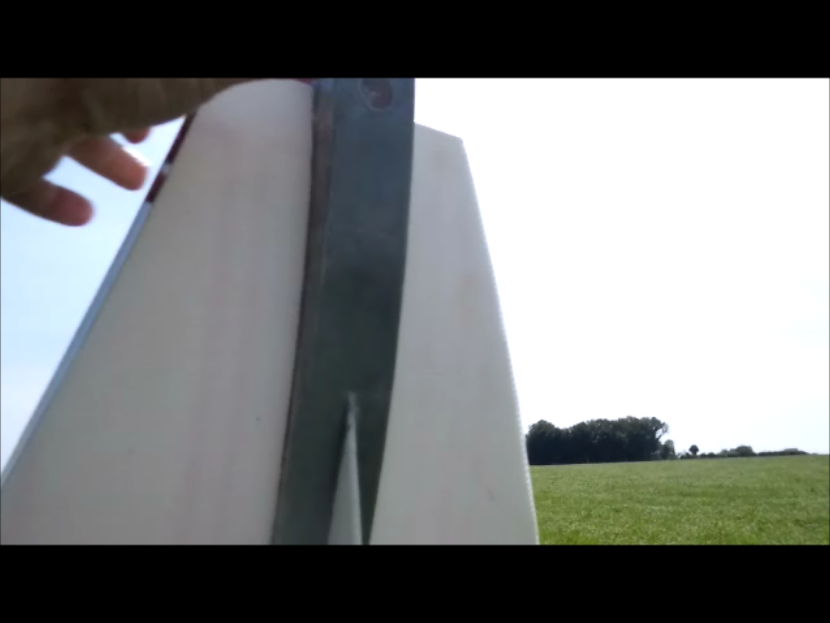 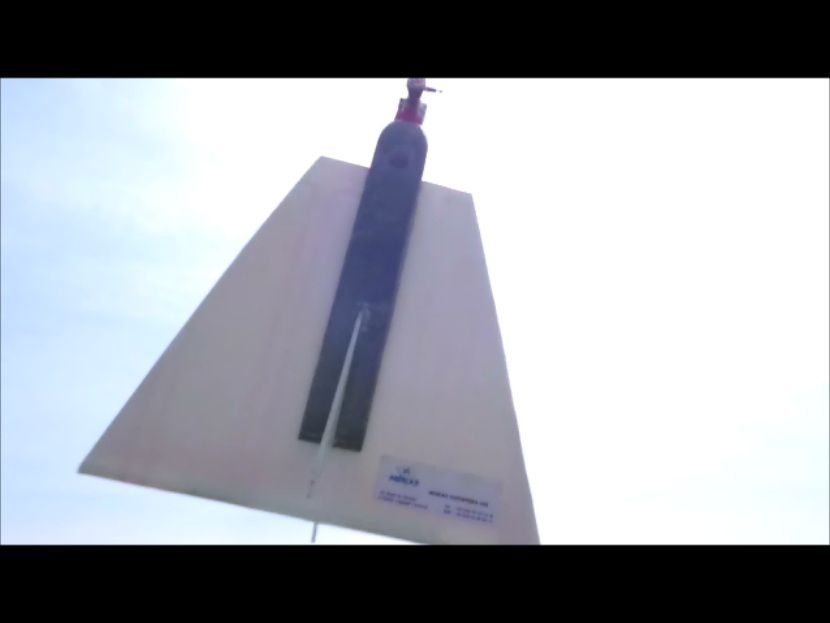 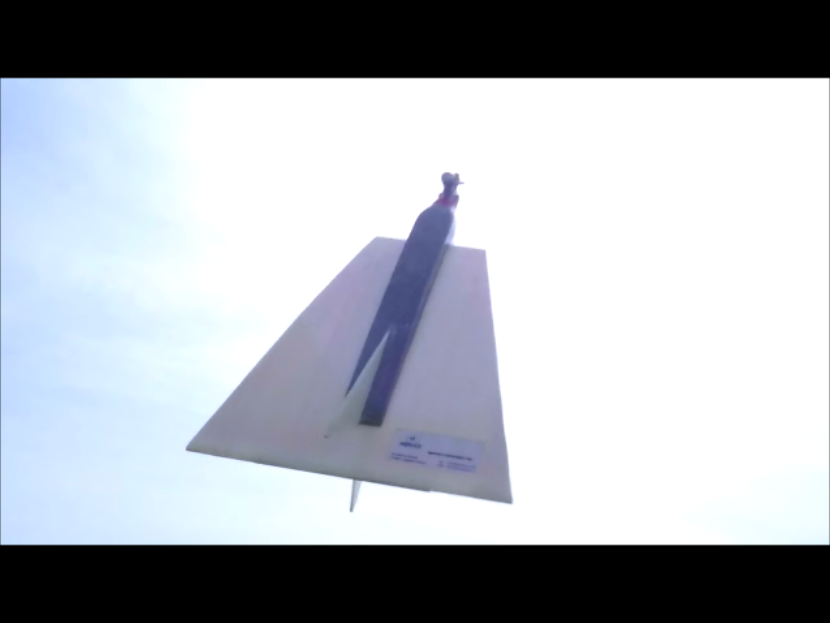 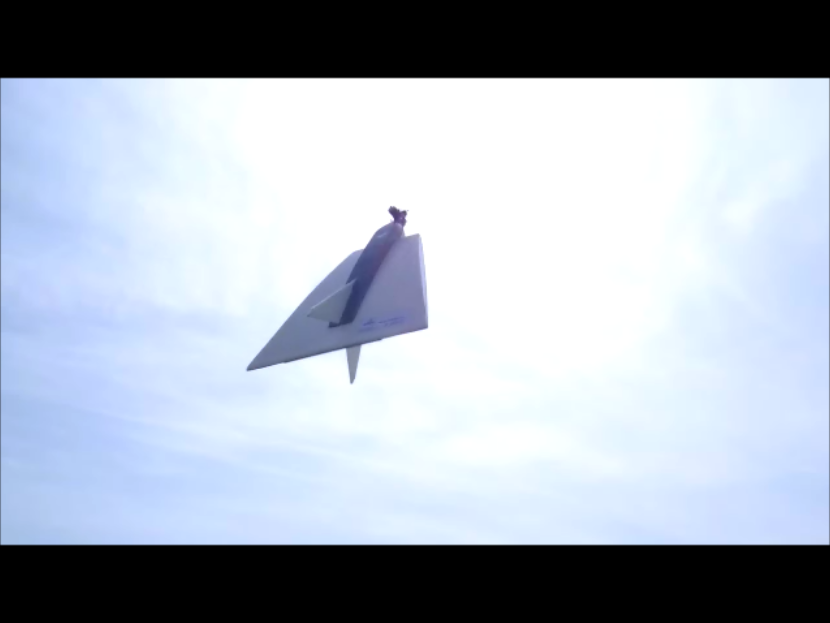 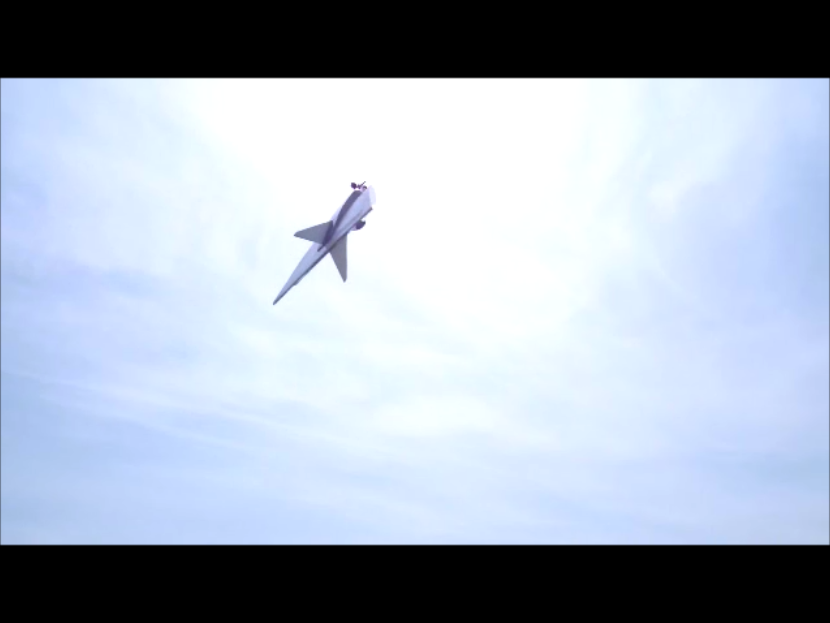 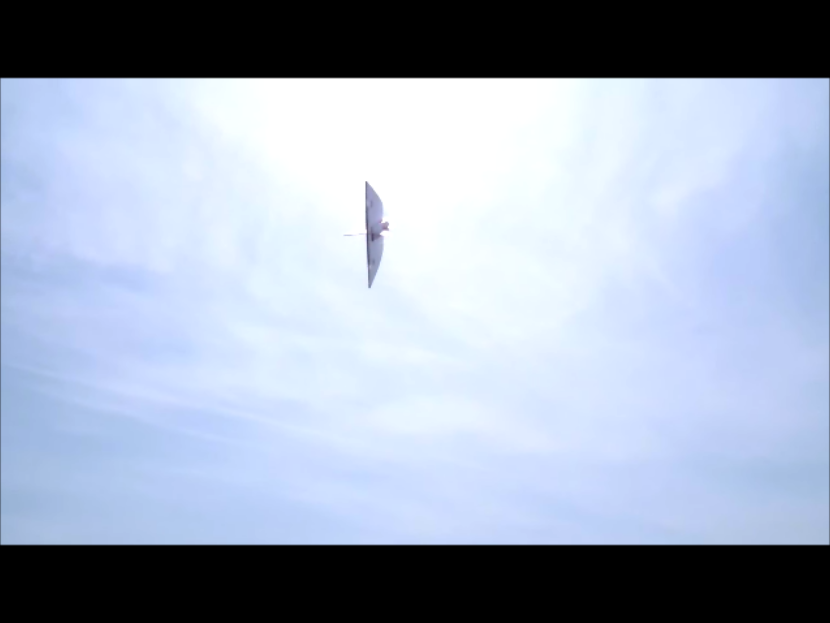 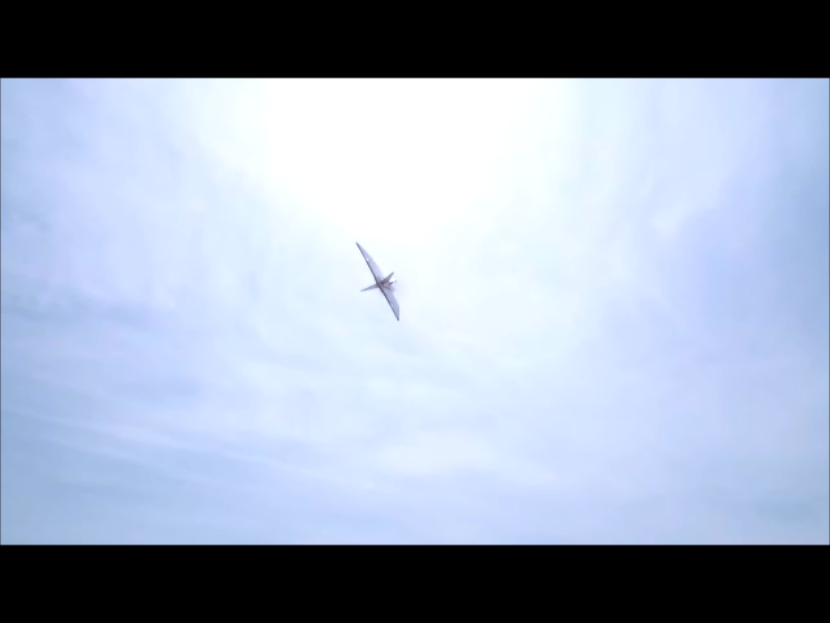 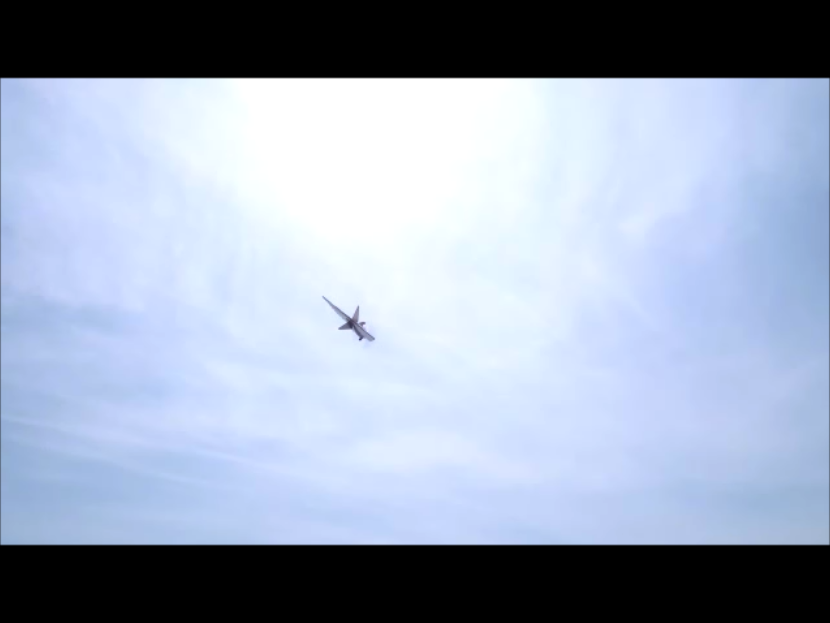 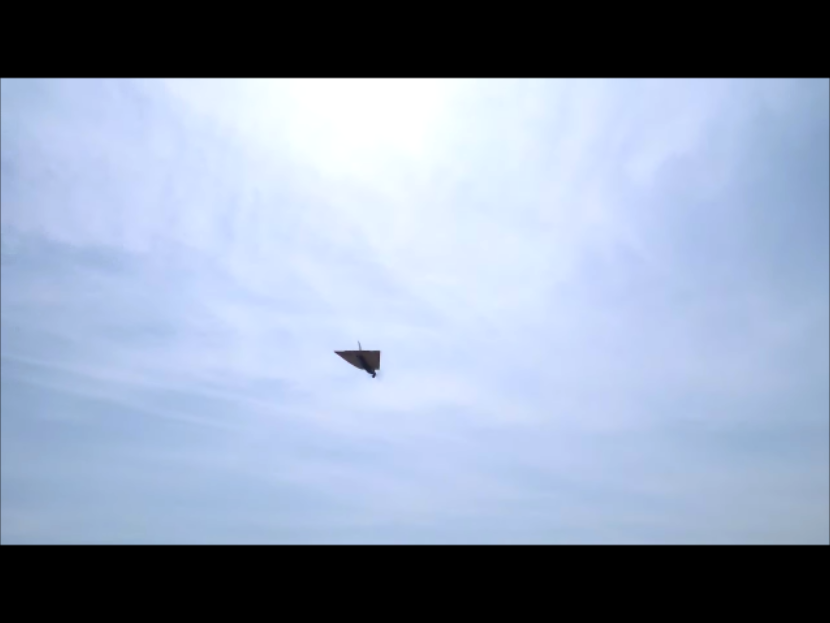 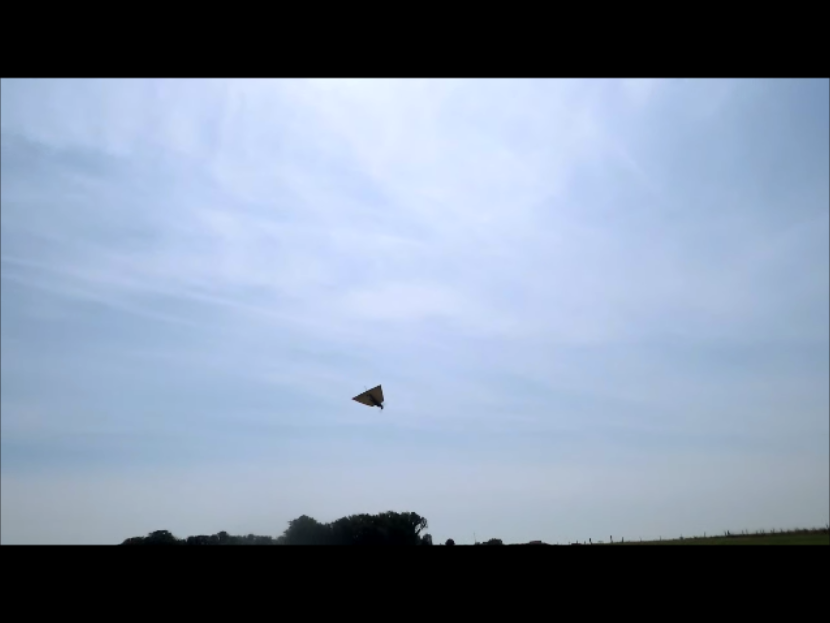 The 180 roll reminded me of an event described on a Smithsonian's channel showing of "Air Disasters" when an Lear Jet encountered wake turbulence from a DC-10 on landing. Rolled 180 degrees and went into the heart of Mexico City. Don't imagine that many DC-10's were in the area though.

I am happy to hear you got it in the Air !! Good Fun

Perhaps a launch rail would improve its tracking and stability. aimed for downtown London of course.