Log in
Search
Latest topics
» FINALLY!!!!! An Engine Day out in the Shop! Black Lynx Break-In and Pee Wee Backplate Run !!!
by Kim Today at 2:56 am

» Pee Wee Backplate Conversions - Anyone Experimenting Yet?
by Tee Bee Today at 2:13 am

» Testor/McCoy heros
by aspeed Today at 2:02 am

» Catalogs on line
by getback Yesterday at 5:00 pm


(Here's an email i'd saved from a gentleman years ago, if anything it confirms the date for Testors and that Jack was the head engineer)

I joined Wen-Mac in 1956 as Marketing Manager. The company was founded a couple of
years before that. The founders were Leonard H. McRoskey, Deceased. And Jack McRoskey
who lives in Rancho Santa Fe. Jack was the engineer who designed everything and was in
charge of production.. Leonard dealt with the office, finances and major chain store sales.

From 1956-1958 the company was family owned. Then in 1959 it was purchased by American Machine
& Foundry Co. (AMF--the bowling alley people). I then was Vice-President, marketing until 1966. I left
when Testor bought Wen-Mac and hired all new executives...that knew nothing about the hobby business).

I then became a marketing consultant for other companies.

Good little read, and interesting. Thanks.

Really interesting. Thanks for posting.

First flip starting? 15 second start from mount to fuel? I once cranked on one of the little darlings for a half hour becoming so frustrated that I almost did a Wen hurl even before I knew of a Fox hurl.

Seriously, immediately thereafter I found a Cox Babe Bee which thankfully started right off renewing my faith in glow engines.

Hope Mark doesn't mind...figured I'd add these grainy, but somewhat cool photos from the article: 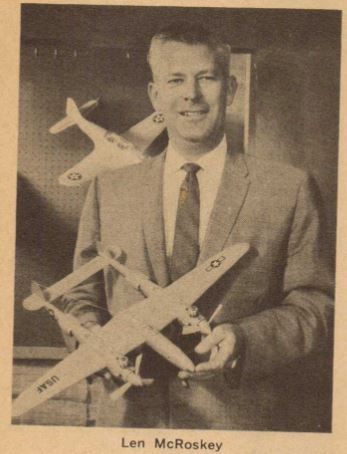 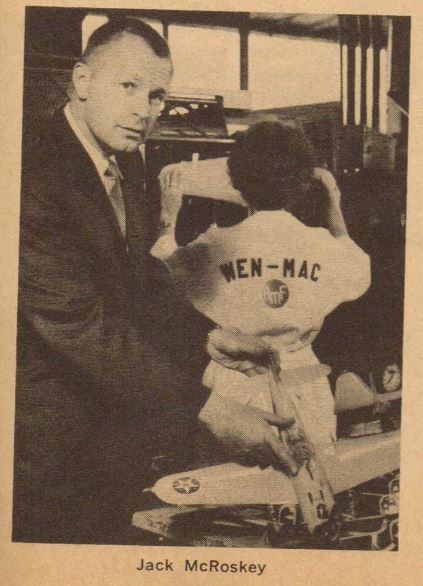 Thanks for the history lesson. I don't recall WenMac models as much as I do Cox. Did not realize they had such a large production and model selection. Seems like I would have wanted a Aeromite Circus as a replacement for my Cox TD-3 flying circus if I'd known one was available.
WEN-MAC, I always thought it was a  shorten version of Wendel MacDonald
The little known but playfull brother of Ronald.

Thank Kim, i had those pics, but couldn't find them.

Yep, the plastic RTF toy market was pretty packed in the fifties into the early sixties, Comet, Cox & Wen-Mac were the big three, Aurora made some really nice stuff but only for about 5 years, Anderson made some Balsa RTF and ARF, likewise there where overseas companies making them as well.

Very impressive story and description of a certainly professional hobby business venture..I may see this from a far distance in Central Europe but COX seems to have retained a much wider visibility by today than Wen Mac...is it just because Wen Mac lost its independence to Testors much earlier i.e some 50 years ago while COX remained standing up longer i.e until acquired by ESTES 20 years ago, and COX Int'l in Canada and Ex-Model Engines in the US  take good care of the continuation of the COX engine history today?

While the 2 companies operated in their heyday in parallel, I still see a distinct difference between the appearance and quality/survival of their genuine products, in the obvious favor of COX.

I think clearly it was the Babe Bee, it just plainly kicked everybodys butt! The machined case was the key as it was vastly cheaper and quicker to make than the traditional cast case, that along with Thimble-Dromes precision manufacturing aka 'Temp-Trol' and by the early sixties about everybody except Wen-Mac/AMF/Testors was gone!

Very cool, thanks for sharing...

Thanks for sharing, Mark. Seems when companies weren't large conglomerates they produced better products. Even Cox seemed to suffer, the quality of RTF's seemed to drop after the 1980's. I guess this is when Leroy Cox was not as prominently involved as before. I saw colored printed glossy paper stickers for windows and markings, the quality decals and paint used before were gone. Stuff just looked cheap compared with a decade and half ago.

Comment about Testors buying the company in 1966 and not know how to run a hobby manufacturing business was of interest. Seems when a company is smaller, then it is easier to handle quality than when it becomes a large conglomerate. Also, I gather that there was much more personalization in know people, the Wen Mac upper management were intimately involved with details and got with people.

Nowadays seems corporate magnates are so high up that they are not in touch with their people. Also, the salary spread is tremendously wider, cutting technical people's salary yet expanding their own.

I saw that at McDonnell Douglas in the latter 1980's. A change in presidents, they laid off the one who saved the company during recession, said they were people oriented, but did away with the company store, which also allowed you to buy tickets to sporting events and shows in the LA and other areas. Old timers weren't happy when McDonnell took over Douglas in the mid 1960's. First thing they did was sell of the recreational park in Santa Monica that was used for the company's annual picnic. Before I left, they removed all engineers except managers with access to their mainframe E-mail system, we went back to 3 part hand written speed memos. (Pink copy you kept, other side filled out reply section, kept white copy and sent you back the yellow copy.)

Several years later, the 55,000 employees at Douglas dropped to less than 12,000, company was sold to Boeing. Anyway, enough of past history.

Regarding ease of starting a Wen Mac, one my brother had in 1966 on his all chrome F4U Corsair was definitely easy starting. I suppose like in everything, if an engine is difficult to start or continue running probably boils down to a few things, may be a glow head or plug that has gone south. I had a hard starting NOS OS Max .10R/C (1964 version) back in the late 1970's. Found it was the new Fox idle bar short plug I bought for it. Changed it out with a Swanson Fireball Hot non-idle bar, it fired up and ran as reliably as a Cox reedy.

Last Cox engine I bought until the past decade was the R/C Bee in the late 1970's. It was a quality engine, ran very well, always was happy with it, even though historically it was discontinued not long after, replaced by the Dragonfly. Last new engines I bought were from the Estes Cox surplus store in 2008 were 2 Sure Starts. Since I have a acquired more Cox, but most these are used engines. The Medallion .09 R/C I got this summer for under $30 was lo and behold, a new never run probably late 1970's vintage engine. (It was mislabled as a Tee Dee with not many bidding on it.)
Anyway, enough of my rambling.

Despite my anti Wen Mac comment above made in 2016 I have since developed a friendly relationship with Wen engines.  I actually got several of them to run and start easily.

Last week I found this Wen Mac Airacobra on ebay BIN.  I had never seen a camouflage version before so before buying it I had the good sense to run it by Mark Boesen to determine if it was legitimate or a kid playing with paint cans. 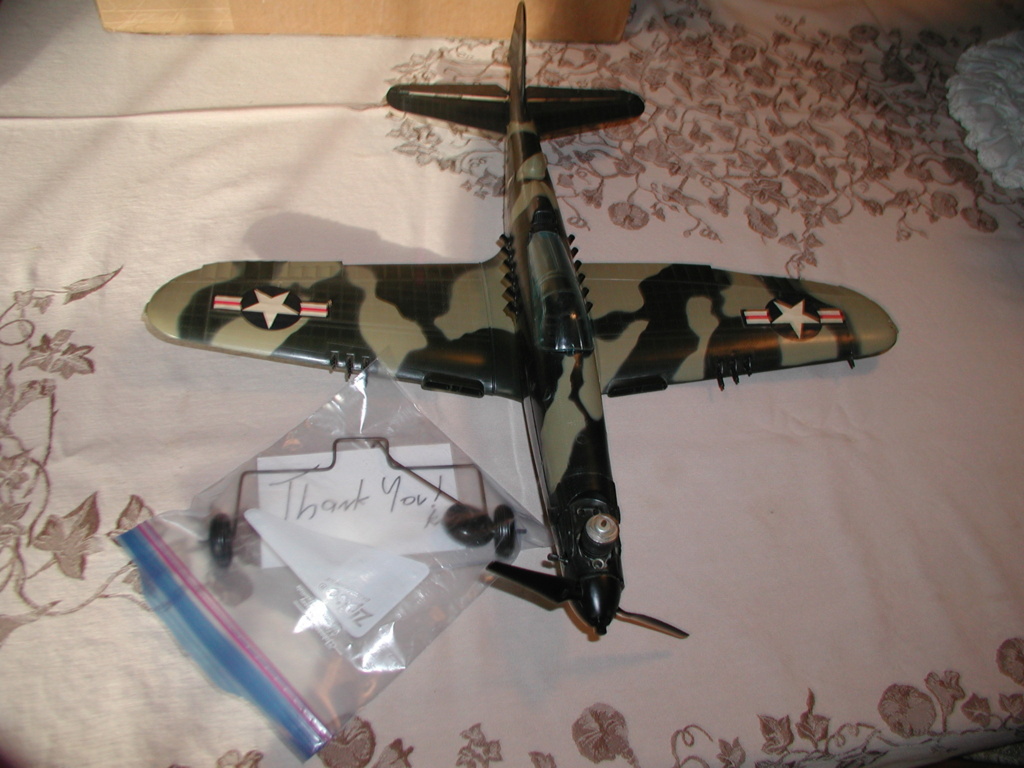 Mark found an ad that showed it along with other Wen Mac models so I bought it.  Arrived yesterday well packed.  No box or accessories, but it is as new, never fueled or ran.  I have about seven of these, white, olive drab, chrome but no camo until now.

I will do a picture post of the group someday.

I believe that your Airacobra is a Testors version. Check for molded engraving on bottom of plane. It may even have a "McCoy" engine or it could have a Wen-Mac engine. There was a post acquisition transition stage when parts inventories were mixed.

ticomareado wrote:I believe that your Airacobra is a Testors version. Check for molded engraving on bottom of plane. It may even have a "McCoy" engine or it could have a Wen-Mac engine. There was a post acquisition transition stage when parts inventories were mixed.

I think your right Victor. The camo version has a Wen Mac engine, but a Testor paddle propeller. It doesn't have any identifying script on the bottom that says Testor either, just Made in USA and control line configuration.

It also has a break away front landing gear unlike the break your plane gear of the earlier Wen Version which has Wen Mac embossed on the nose while the Testor version doesn't.

I will compare these more in a different thread. 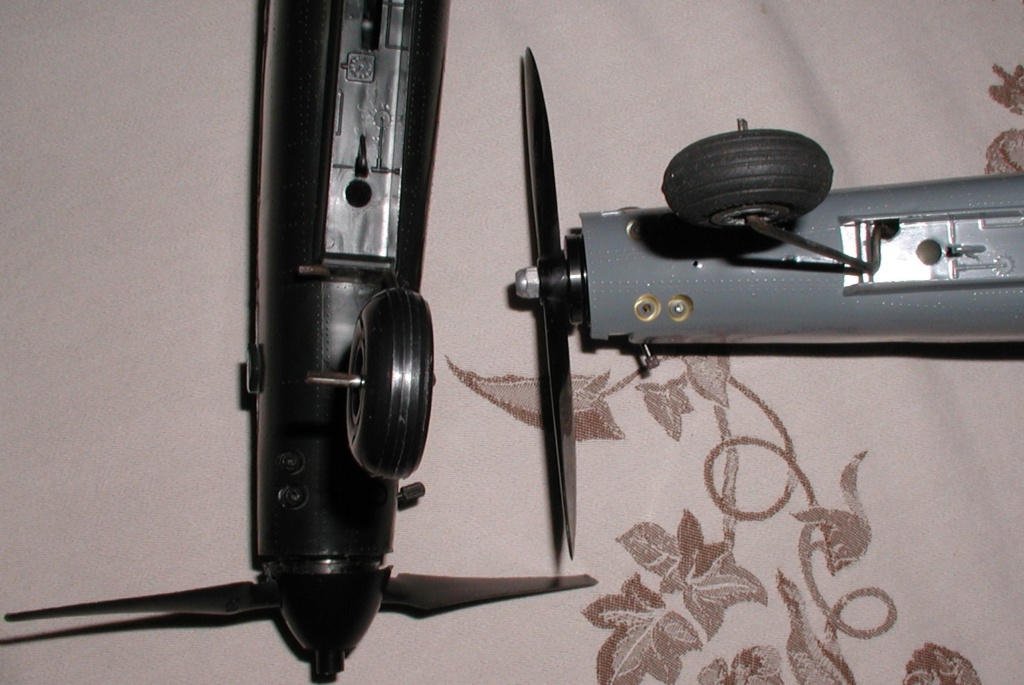 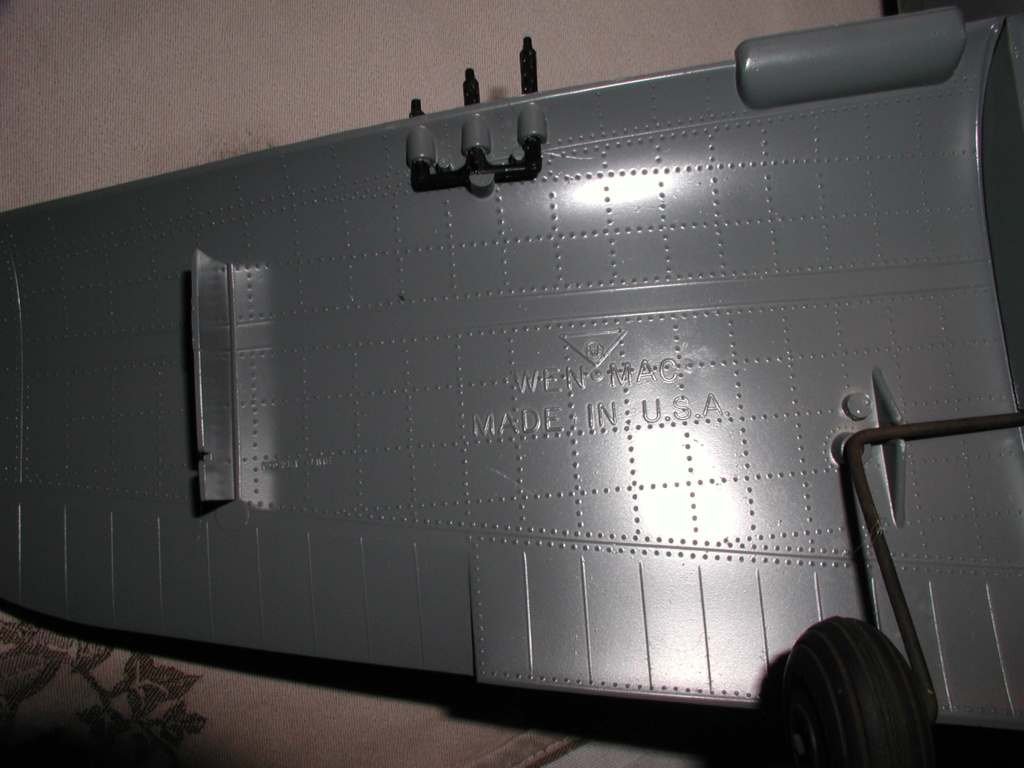 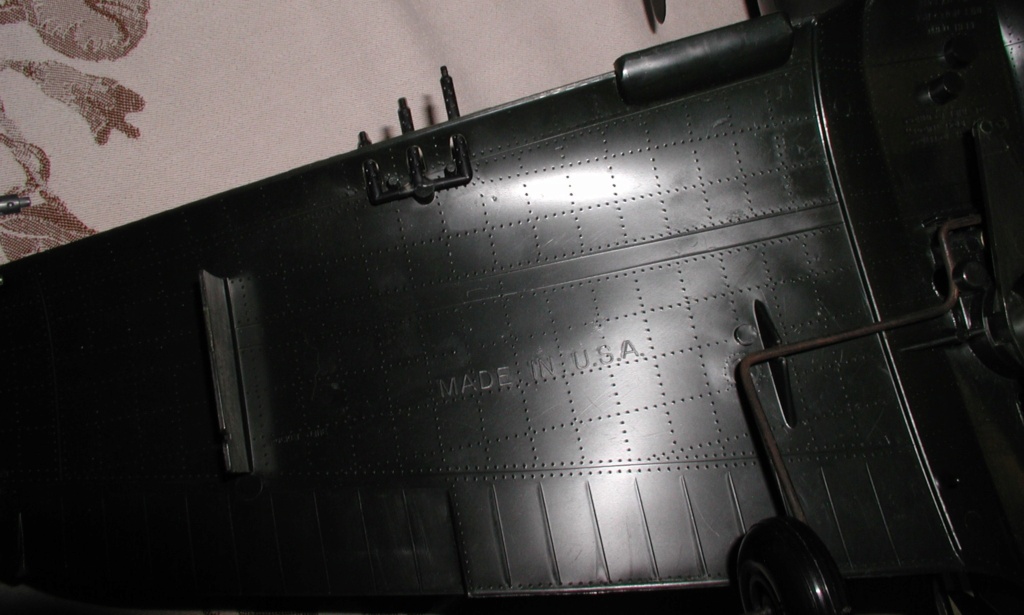 rsv1cox wrote:Despite my anti Wen Mac comment above made in 2016 I have since developed a friendly relationship with Wen engines.  I actually got several of them to run and start easily.

Last week I found this Wen Mac Airacobra on ebay BIN.  I had never seen a camouflage version before so before buying it I had the good sense to run it by Mark Boesen to determine if it was legitimate or a kid playing with paint cans.

The grey matter is getting weaker. Thinking back some 40+ years ago, think I remember seeing those in early 1970's? Beige camo offsetting the black would make it more appealing physically. Call it the night version P-39 / P-63? May be the Testor's Corp got a big low cost buy on black durable styrene plastic? Perhaps this was the same plastic they were moulding their retail product .049 tanks from? Or needed to get rid of the unused black plastic? 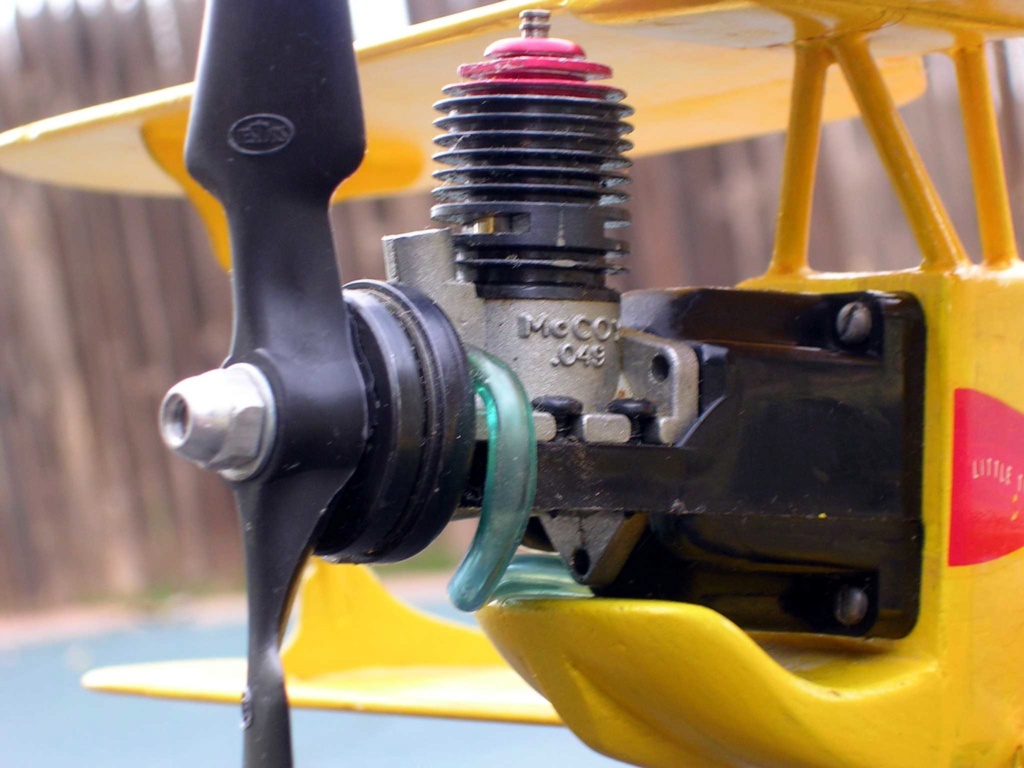 Anyway, Bob, you certainly got a rare one there, looks good. There's something about the Airacobra's tricycle gear that makes it a desirable warbird CL to model. Wen Mac did a decent job on replicating it.

Bob. As you may recall, I got myself a White Wen Mac version of the P-39 quite a while back. I'd like to try to fly it, but it's missing a canopy, which may make its marginal flight characteristics even worse. Have you ever tried moulding plastic canopies? Any chance you could make me a copy of one of your originals? I've seen plastic soda bottles used. I'm not after collectable type authenticity, just something to streamline and neaten it up.

I have them in clear and blue tint Rod.

I made one from balsa for this crashed Airacobra that was missing the canopy.  Casting one from an original would be difficult due to the pivot extensions at the rear that are quite thin and prone to breakage.  But Jim is the authority here for heat shrinking them. 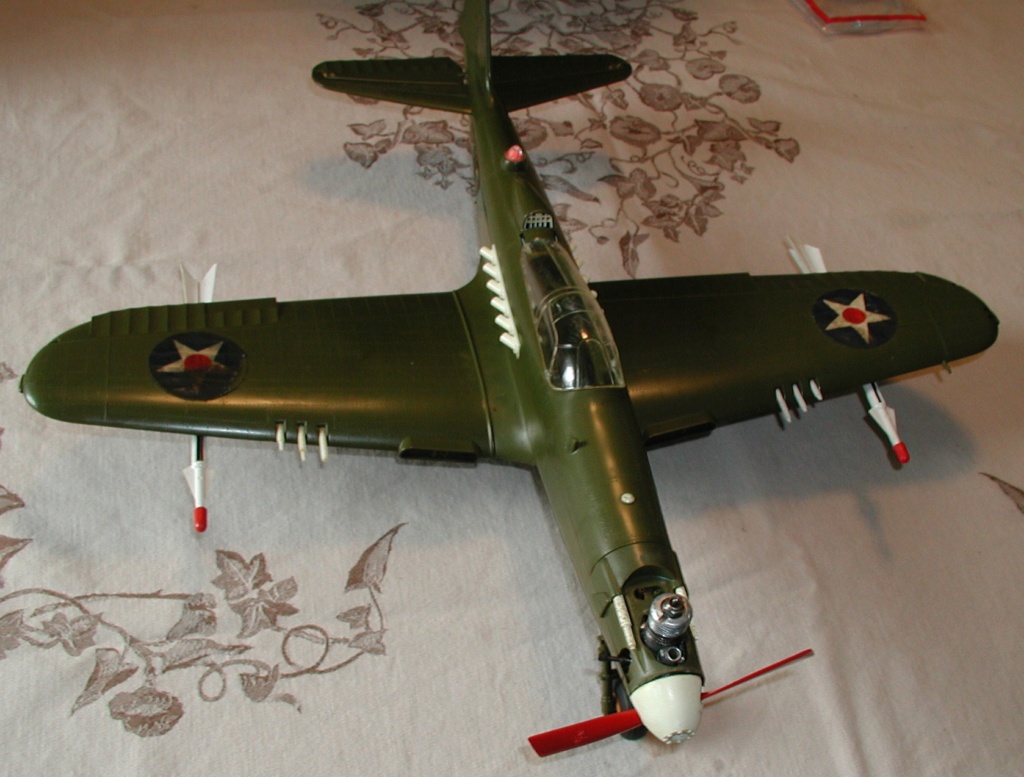 I just filled in the slots with putty on the balsa canopy. 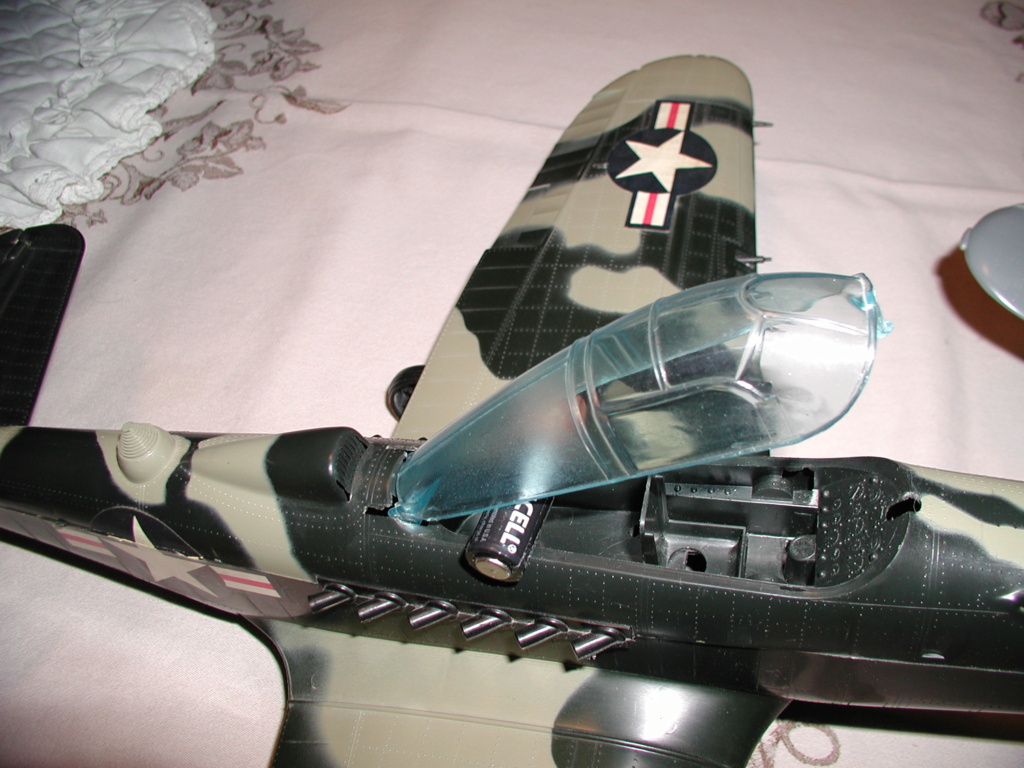 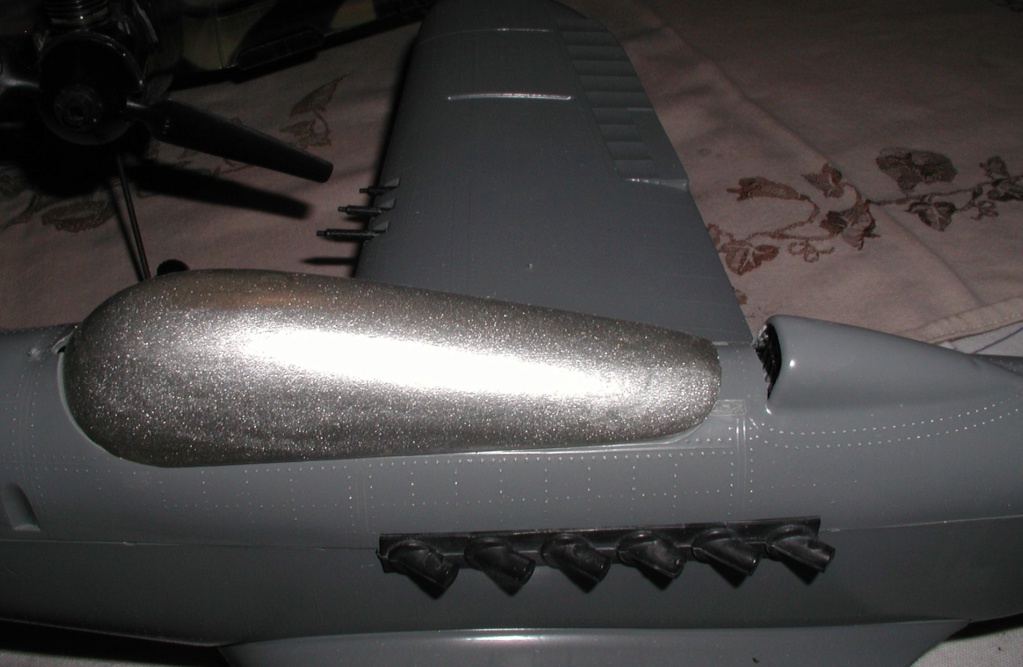 I had a Wen Mac hovercraft back in the mid 1960s. Never did get it to run.

I guess it got tossed out, along with my PT-19, Riviera, and Spitfire, after I moved out of the house.

TLAnderson wrote:I had a Wen Mac hovercraft back in the mid 1960s. Never did get it to run.

I guess it got tossed out, along with my PT-19, Riviera, and Spitfire, after I moved out of the house.

I got to thinking, maybe one could be 3D printed out of clear plastic. Or perhaps one could be drawn over an existing original canopy without the pivots, then just fill in the planes slots. But your risking the original canopy being damaged by the heat so probably a form would have to be made.

.  No problems.  Had to go back to the start of the thread.

Further forensic examination indicates that it was never fueled, just subject to less than optimum storage conditions over the years. I guess the dog chewed up the plastic airframe or maybe a long time in an attic just heat rotted it away.