» Micro 12VDC Generator with a Cox .049 Sure Start Diesel Engine
by Coxfledgling Today at 6:55 am

» Let's design a model for one of our Cox engines.
by batjac Yesterday at 6:48 pm

Something Followed Me Home....

Something Followed Me Home....

Ok. Not a big huge deal, I just thought I would share a picture of what followed me home the other day. Both are ridden very hard and put away very wet. The Beetle body was the roughest with cracks in many places. The van had only the front mounting catch start crack. They did NOT look like this when they followed me home. I had them cleaned very well, thanks mom, then I carefully used Dollar Tree CA to glue the bodies back together in the correct places. I then waited for it to dry very well. I then used a wood burning pencil with flat tip to carefully 'weld' them back together. The other things worth mentioning are that the pair only came with one engine (without glowhead), however both fuel tanks are present. The rear 'drive wheel' on the van is cracked up and missing a small piece. The pair also only came with one tether attachment rod (white plastic piece out the side of the van). Possibly the worst thing is that the gears on the drive wheels each appear to have a 'bad' spot on them in which the slip a bit. This is, however, only by flipping by hand. If I was to ever get it running, they may still be alright. It also came with a spare van chassis, but the only thing on it is really the base chassis and 2 wheels. The last thing I will mention is that the back white reed piece with needle is really loose to the crankcase. It does not really 'snap' in, but rather sit in it. They do look nice on display anyways. They will remain there till I can find either another engine or at least a glowhead. I have another engine in a P-51 I may be able to use for parts, but it too is missing the glowhead. Anyways, here are the pictures of the pair. 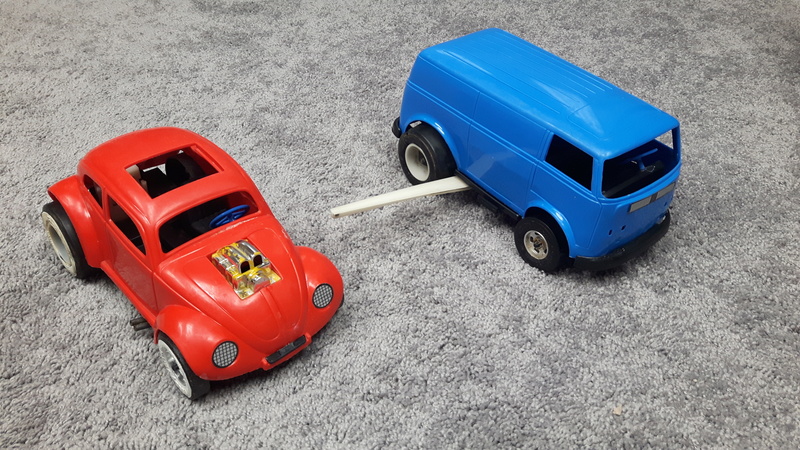 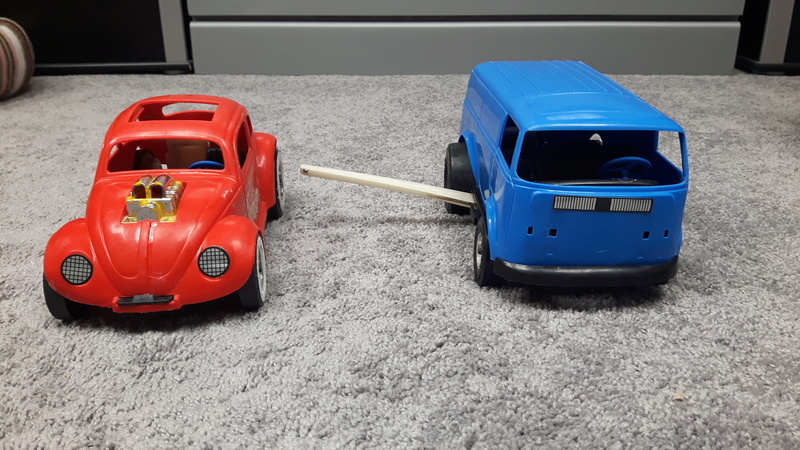 Oops. Sorry, I lied about something. The spare chassis also had a steering wheel, so I borrowed it to put into the Beetle as it was broken and only a nub was in the dash. I just remembered when I saw the picture.

I had the Volkswagen Beetle. It was gifted to me by my aunt in the late 70's and to my surprise it worked quite well. I played with that numerous times and then the crankshaft broke. At that point, it was put on a shelf and I finally disposed of it not thinking of ever repairing it. Fast forward several years ahead, I came across at least 2 dozen Testor engines and I was always discouraged for getting rid of that car. I had no real attachment to the characteristics of the car because it didn't have the same detailing that a Cox car offered. It was something that was real fun and drew quite a following when operated. The white bridle is key, they're hard to find and typically missing with these cars. Enjoy them, they're neat cars. I had to add some weight in my bug to keep the rear tires on the ground from bouncing. Ken

Thanks for the history Ken. If I may tickle your brain for a minute. If I hypothetically decide to find me a head locally and run this thing, how would I hook up the line(s). I see only one hole in it. How many feet roughly of line? Do I hold onto it, or mount it to something and become a spectator outside the circle? As for the tire, I was either thinking of getting it as close to shape as I can and gluing it together. I was then thinking of a very thin layer of 'rubber type material' contact cemented around it for traction as it is hard. Or is it supposed to be hard. I was thinking it was soft to grip the ground. Please correct me if I am wrong. Thank you again.

Those are real nice! I have a bug just like yours and a yellow VW pickup. I have an extra engine you are welcome to if you want it. Crank pin is broken off but glow head is good. Just shoot me a pm if you want it.

I probably would start with about the same amount of line as a 1/2A aircraft which is about 30-35 ft. Just for the record. I'm trying to recall 40 years ago. The car came with Dacron line. This could be substituted for .015 flying wire as well. Lighter weight wires if stepped on places stress risers in the line and it breaks. If the car does get off the line it usually spins in circles and doesn't know where to go. I used a masonry nail into the ground but even a piece of ply 12x12 with a bolt coming up through the center can be used. I terminated my ends with a line clip which the nail went through allowing it to pivot. If you go the ply route, weight it down with weights and make certain they don't interfere with the line. For the traction, my dad put a very wide rubber band on the drive wheel which worked quite well but it was short lived after a day or two. I went with weight in the car but the plastic wheels on the car are not like the rubber Cox wheels . Your going to be impressed because I recall when the the engine really started to lean up at the end of the tank the speeds really picked up. I wasn't expecting that from a Testors car. The Testors Black Widow was one of my favorites and I never had one of those but my cousin did. Ken