» Cox Conquest, mods and experiences.
by Ken Cook Today at 11:57 am

Look what followed me home

Look what followed me home

As of last night, I added another clunk tank Cox engine to my stable, an 049 Dragonfly. Got it for $22 + $4 shipping. There was only one other bidder against me, was any of you here?
(Just curious)

Now waiting for it to be shipped. 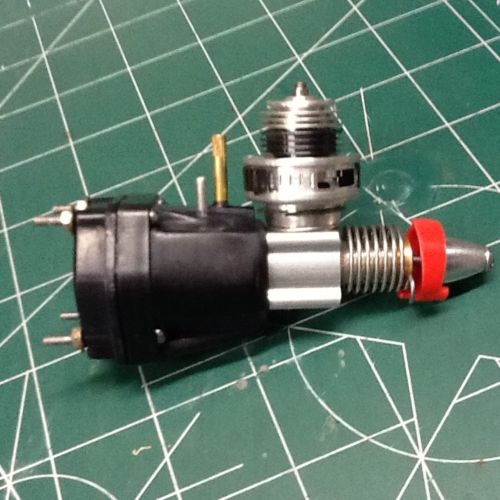 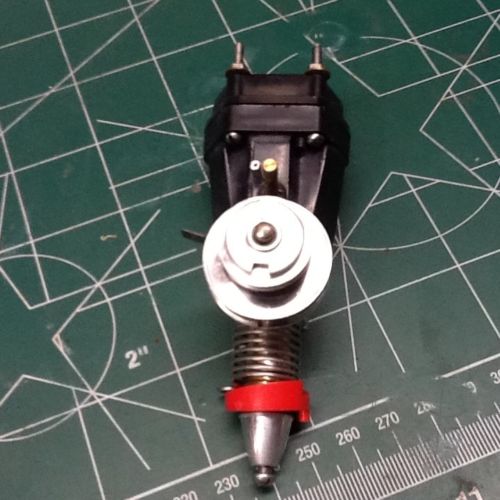 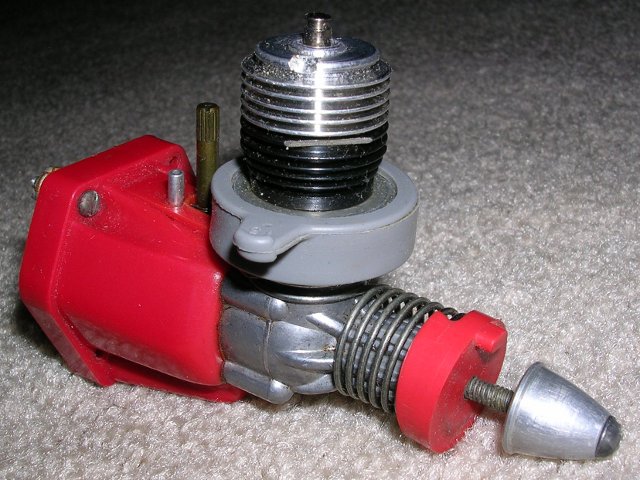 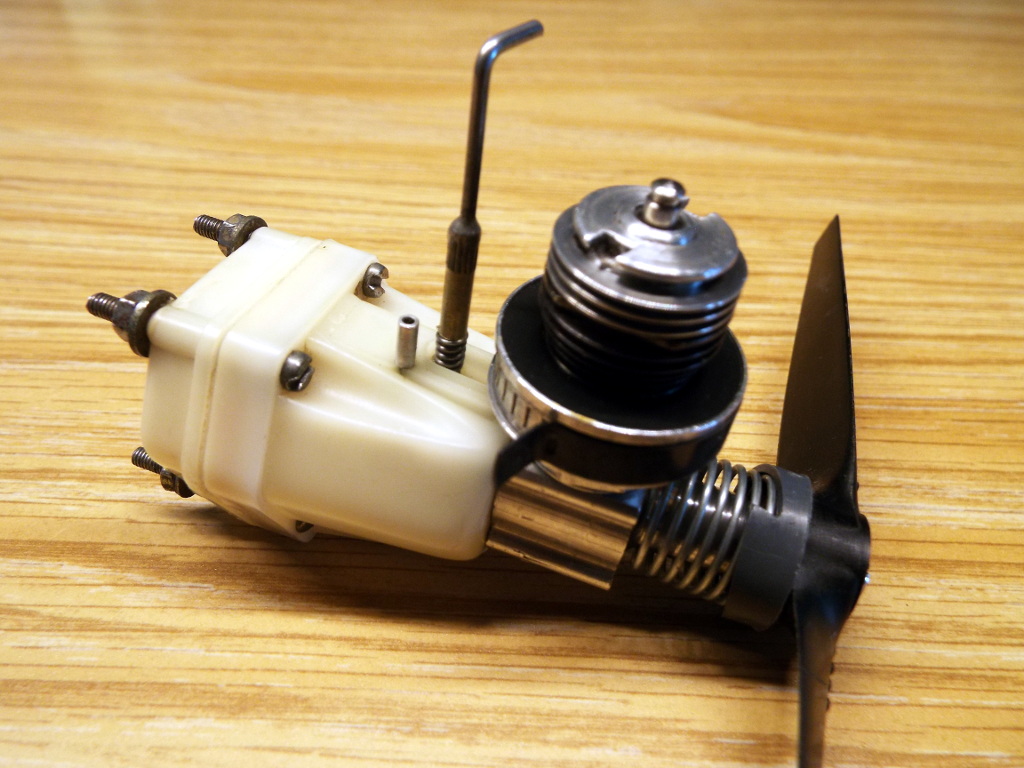 Not quite. There is an orange and yellow tank version. Practically unobtanium. Dan Sitter was selling a few on eBay ~5 years back.

Jason_WI wrote:Not quite. There is an orange and yellow tank version. Practically unobtanium. Dan Sitter was selling a few on eBay ~5 years back.

Jason, I only know about the common Cox production items, never heard of the orange nor yellow versions. What is the history on those?

rsv1cox wrote:You got a great deal, and $3.99 shipping, the seller must be a saint.

Bob, will know more when the item arrives, hopes he pads it well.

Not long ago I purchased the prized "Twig", 26" span 4 channel Little Stick Bipe. Shipper only packed in butchers paper, thin box was folded in half by the Post Office, rendering all sticks, leading and trailing edges unusable, and a portion of the sheet goods destroyed and unusable. I'll have to replace the sticks and cut new pieces from sheet stock. Once done though, it ought to be a hot performing bipe, certainly not for the faint of heart.

We used to announce on the forum when we were bidding on an item so we didn’t bid against each other. Kind of a gentleman type thing. I see no reason that we shouldn’t keep that tradition going.

Glad you are happy with your purchase George.

Cribbs74 wrote:We used to announce on the forum when we were bidding on an item so we didn’t bid against each other. Kind of a gentleman type thing. I see no reason that we shouldn’t keep that tradition going.

Glad you are happy with your purchase George.

Agreed! Ain't nothing I need so bad that I'd go against one of our buds to get it !!!!

Cribbs74 wrote:We used to announce on the forum when we were bidding on an item so we didn’t bid against each other. Kind of a gentleman type thing. I see no reason that we shouldn’t keep that tradition going. Glad you are happy with your purchase George.

Agreed! Ain't nothing I need so bad that I'd go against one of our buds to get it !!!! Ebay Impulse Kim

Thanks, Ron & Kim. I haven't been paying much attention, and I am not that active of an engine buyer, basically once in a while here and there, and only a small number of Cox engines on top of that, so I'm a little out of tune with the forum etiquette. Where do you place such discussions?

My curiosity was if there was someone else here who may have been interested in the item. I've been watching certain items on E-Bay, and for one reason or another, the bidding on same quality item cause people to go crazy with bids, others hardly any bidding. I don't know what gives, but am glad when I land something that seems not many are really interested in. My Cox .09 Medallion R/C, .049 Ranger and .049 Medallion where such buys.

So, wasn't trying to scoop someone if they were bidding here, just more of a curiosity than anything else.

And, according to Jason there were other color tanks shot from the same mold but fewer in number, must have been a limited production run of some sort. Brightly colored tanks like orange and yellow would be of little use unless were intended for engine to be out front and exposed. Perhaps prototypes of some sort? Or, may be for those colors, the pigments are more expensive and considered non-competitive and eating into profits?

I'd understand the Ranger tanks being left in natural white. In making RTF's, cowling would make colored tanks superfluous. Most half-A kits had the engine exposed or simply sheet cheek cowls on each side of the engine. So, red and black would help to add a little visible color to the front end.

With 3D printing machines, I'd think that 3D tank mounts could become practical, but have no ideal of what costs may be involved.

RE: Look what followed me home

Have always scanned the forum to see if other members had a serious interest in a particular eBay item.
I haven't needed anything badly enough to block someone else from what he might be after, or run the price up either....
I like the  "live and let live"  philosophy.
I also like to support our key suppliers like Matt and Bernie, and Steve over at Select Hobbies even though my orders haven't been very large lately...…………..

Frankly, my interests are diverse enough that may be with a rare exception, I am probably the only one here bidding on a particular item. Overall, I have my share of disdained engines, the Gilberts, Wen Mac, Testors in different flavors, K&B Stallion, Torpedoes, Sportsters, couple MDS Russian engines, Norvel sport .061 engines, only Tee Dee I have is a .020, other odd balls like the Cox postage stamp, a few Medallions, and no ultra-high performance half-A's but a handful of sport reed valves. Then have odd ball accessories like Tatone mufflers, some Dubros, etc., not to mention also odd ball kits, too, including control line and free flight. (Who these days does single channel?)

So, I serious doubt that I would ever be interfering with someone else's buy. I did go neck and neck with a bidder found later to be a member or RC Groups on an Enya .06 reed valve engine. Later he offered for me to buy it from him but never took him up on the offer.

Plus, once a price starts to escalate, I then lose interest. I like engines, like to clean up and restore engines, am not particular to clean, new in the box engines.

So, I'm not going for that rare must have item as I have enough to be content with. Life is too short to have conflicts over essentially toy engines, if you know what I mean.

And yes, I don't order much, but have gotten parts needs met through Bernie's and Matt's Cox engine supplies.

Nice Looking collection of clunkies , i have had a couple of these engines but let them go . Wish i would have ran some of them , found them a PIA to clean up i guess it was all the screws

Well, as this post has expanded into a discussion of ebay buys of our particular interest, let me offer (again) my ebay bidding philosophy.

In olden days ebay identified the bidders/winner, today it's coded.  Not so easy to ID fellow CEF members, but you can look to locations.  Only way to avoid in-forum competition would be for Jacob to set up a bidders page, but I don't know if I would be in favor of that.  Might not even be legal in today's litigious world.

All that said, I have been on an ebay rampage.  Christmas gifts, and then there is meeeeee.... 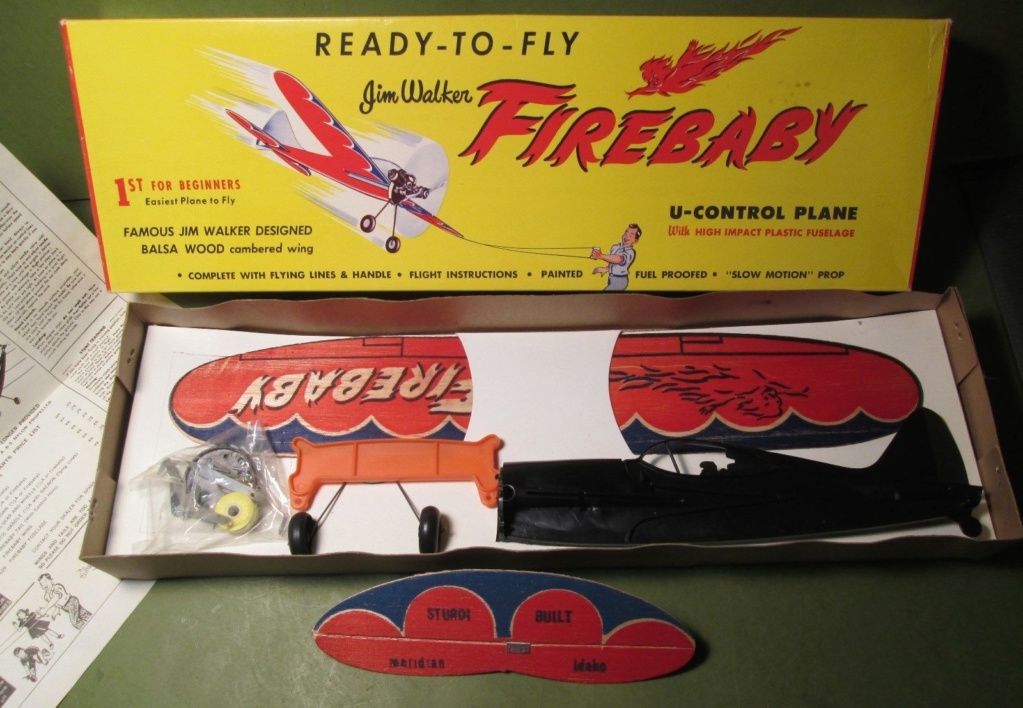 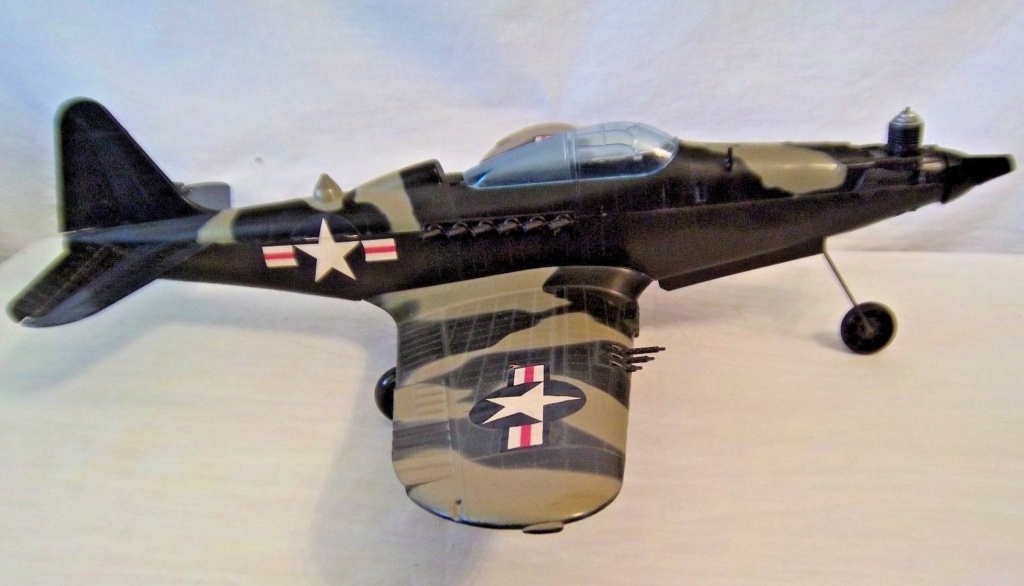 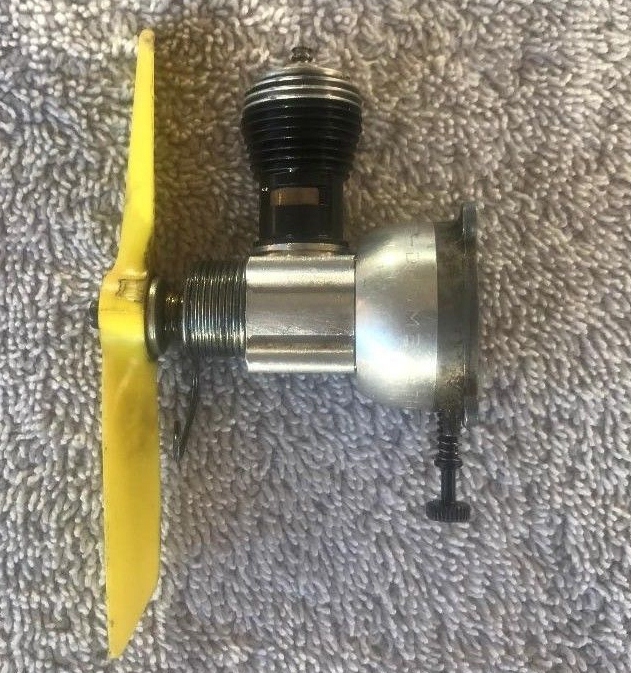 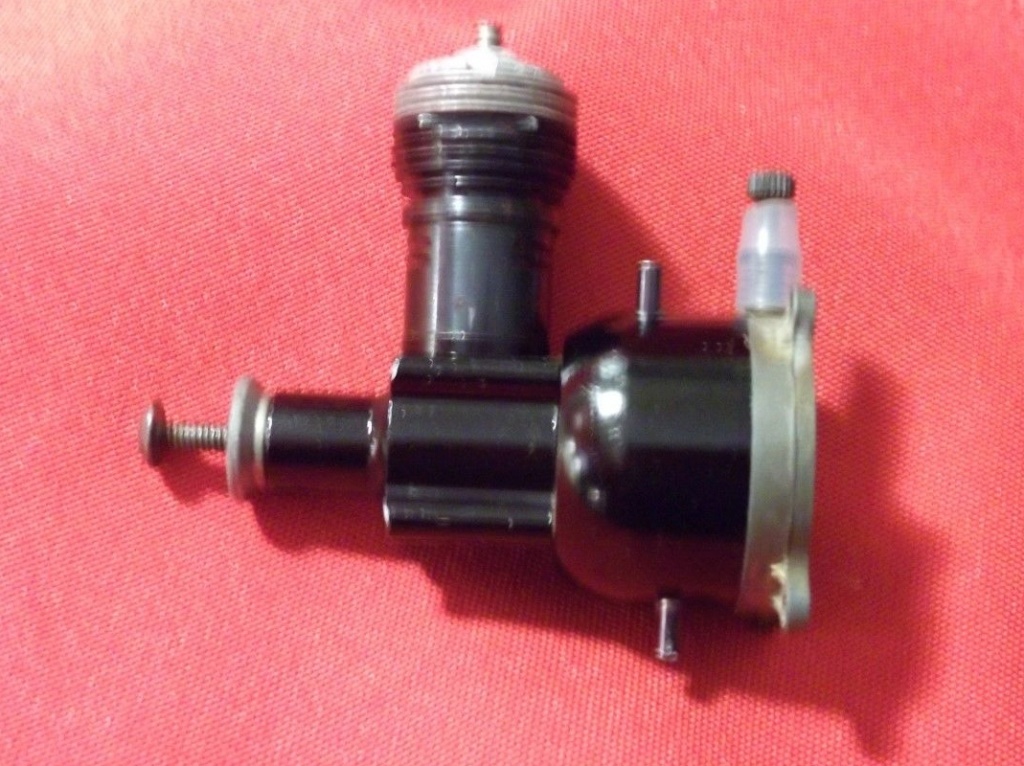 And others that I can't picture as someone close also reads these pages.

The yellow prop BB came with the parts pictured.  I just wanted those small tanks.  Thought they might work for my planned fleet of Firebabys.  The BW just looked weird and that's the first black fuselage FB that I have seen.  Oddly marked too and the pilot is missing most of his head.  A "second" perhaps, but the box is mint.

Got the three engines too, Silver Bee, BB, and a diesel OK Cub marked .049B  Looks like the head is dedicated not a glow plug adapter.  Guess OK made a diesel too.  I'm thinking diesel Firebaby. I like the wood prop marked Series 25. 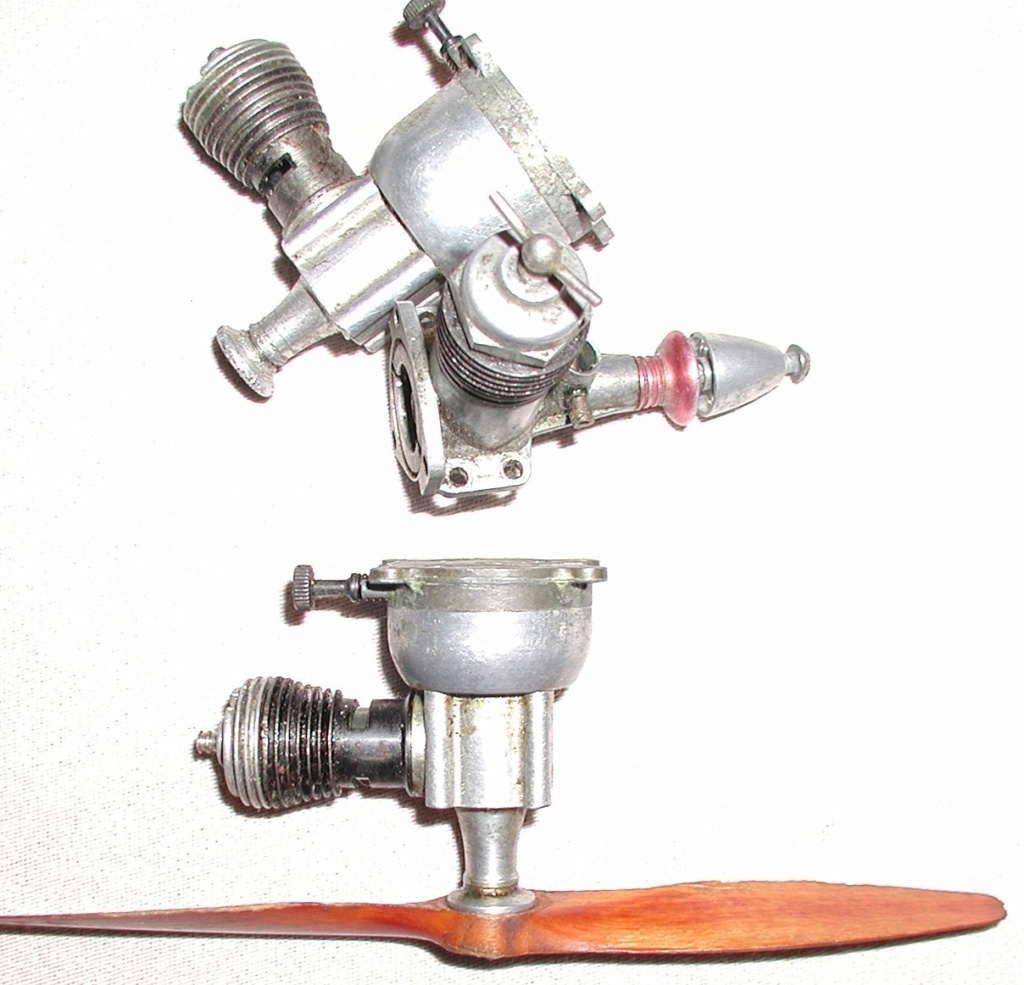 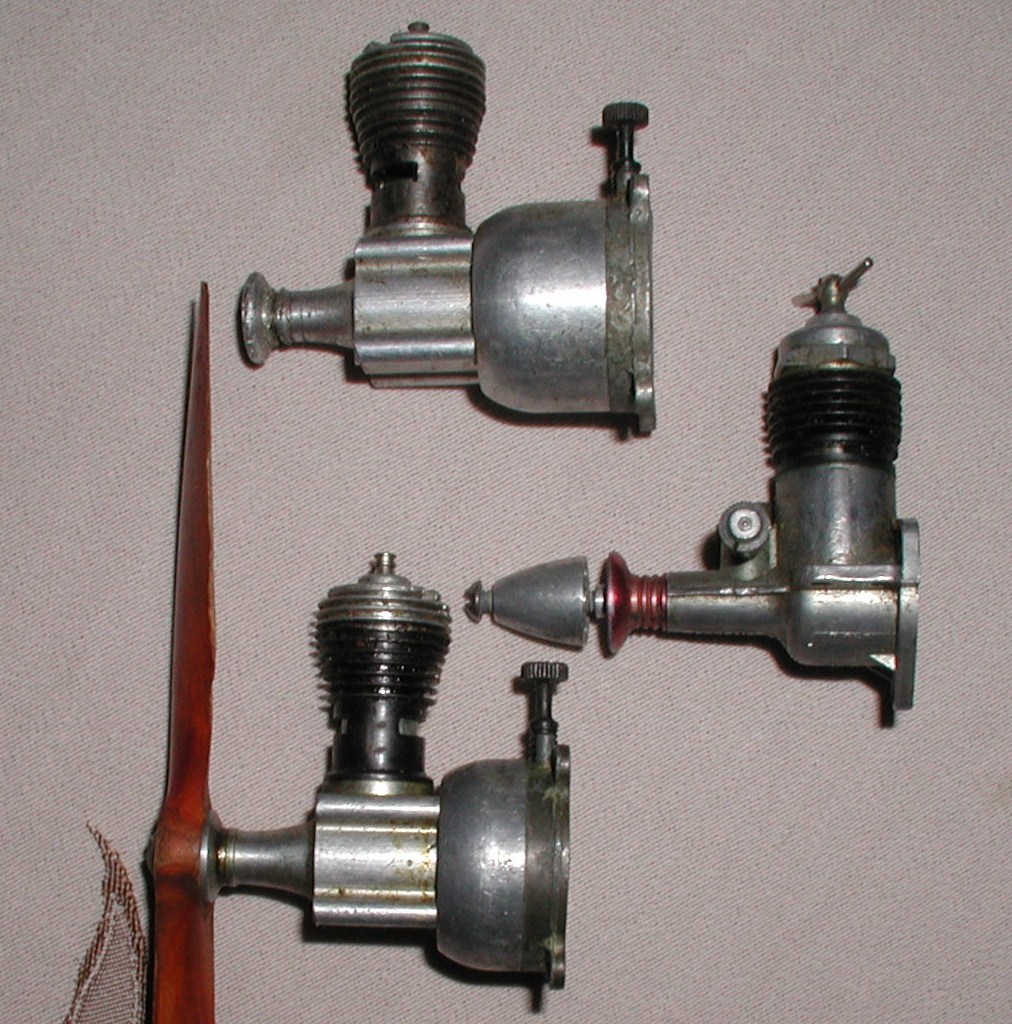 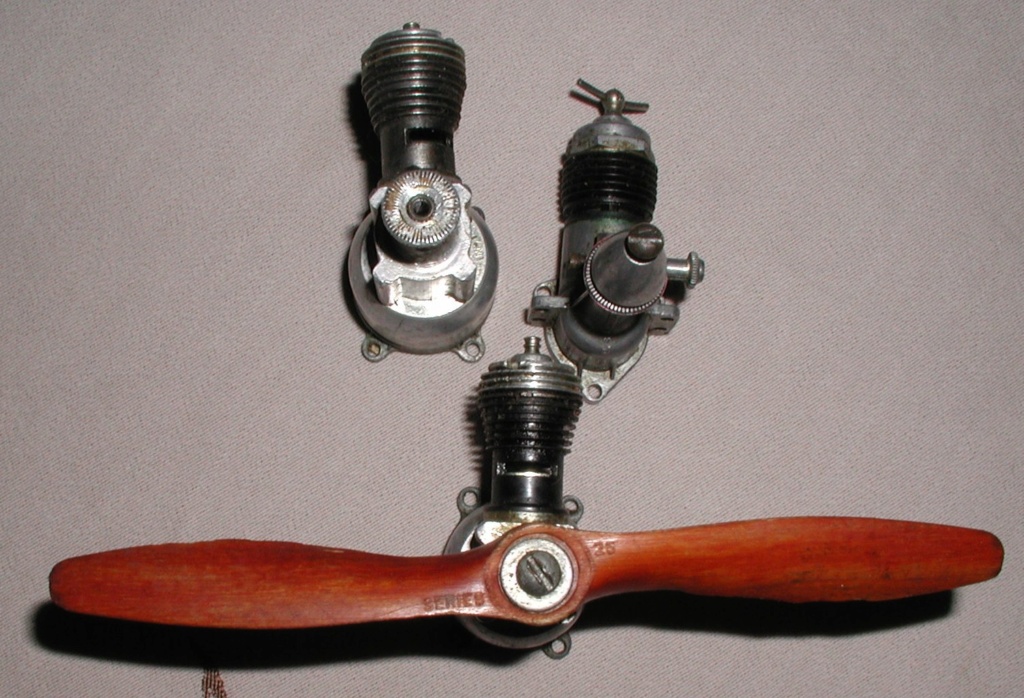 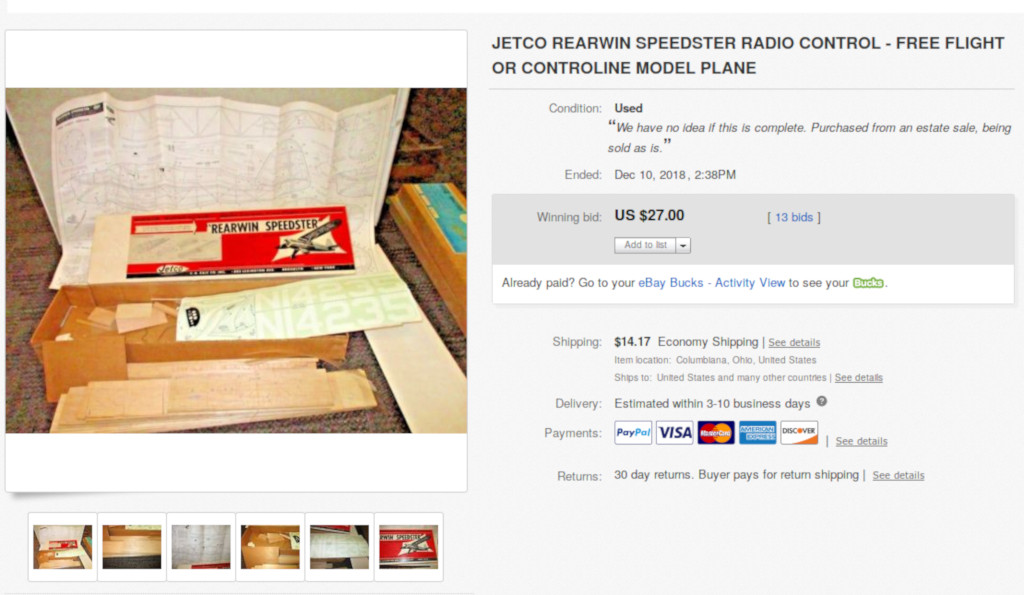 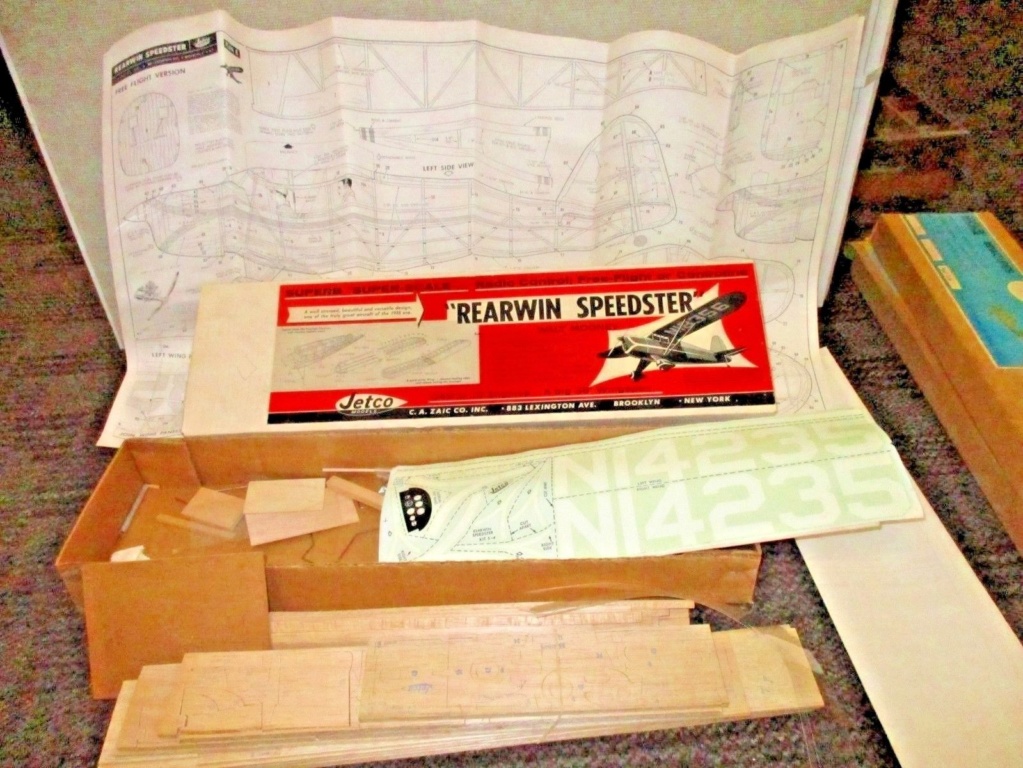 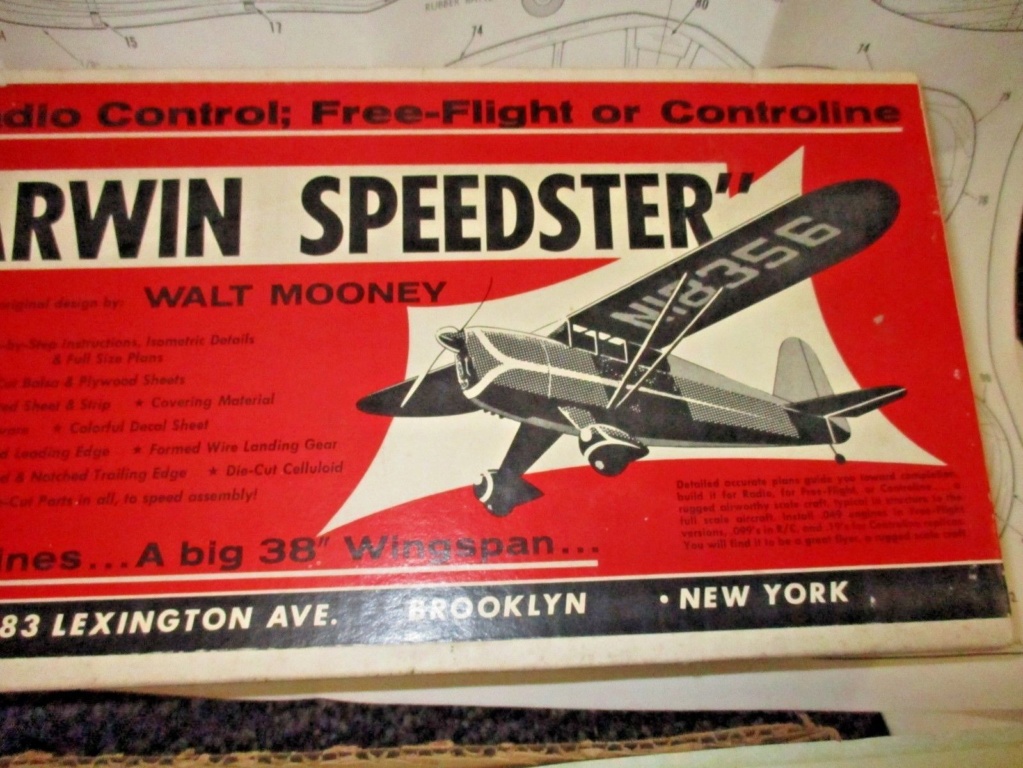