» Jim Walker U-Reely and a Cox connection?
by getback Yesterday at 5:06 pm

I recently bought one of these on eBay and while getting it up and running I found that the fuel tank plastic had become very brittle and both of the fuel line connections broke off.  I created a replacement by cutting down and soldering a Perfect #3 fuel tank and adding some brass sheet to the bottom to fit into the tank holder.  This was surprisingly easy to do and hopefully will help inspire anyone else who needs to replace their Skycopter tank. 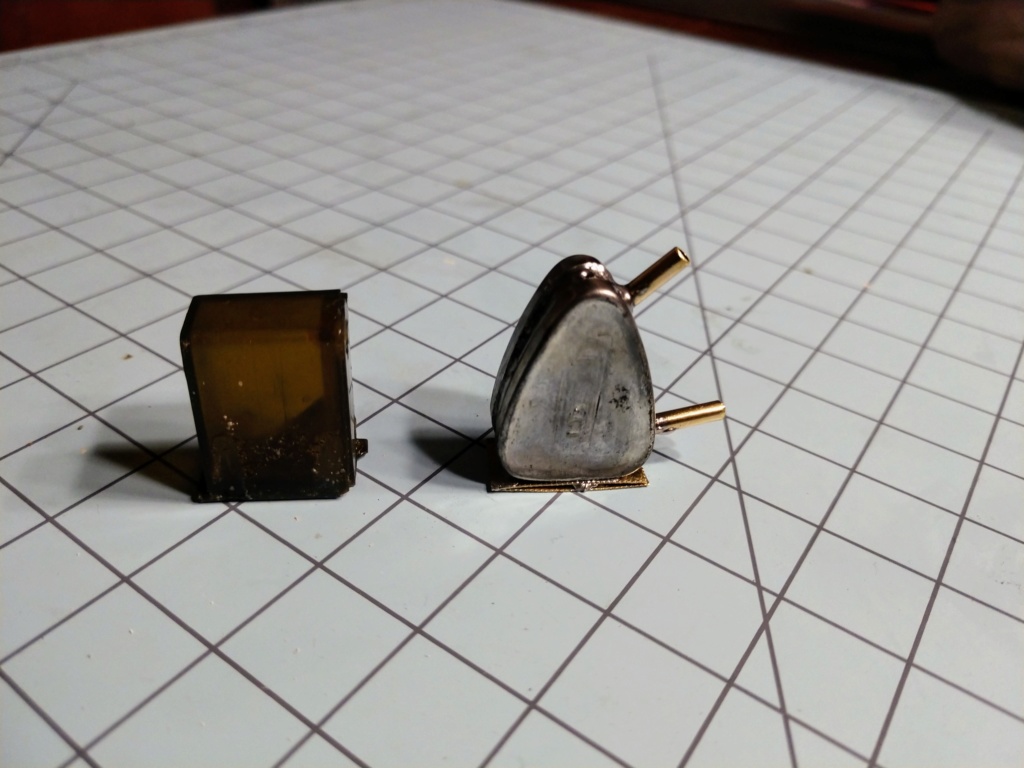 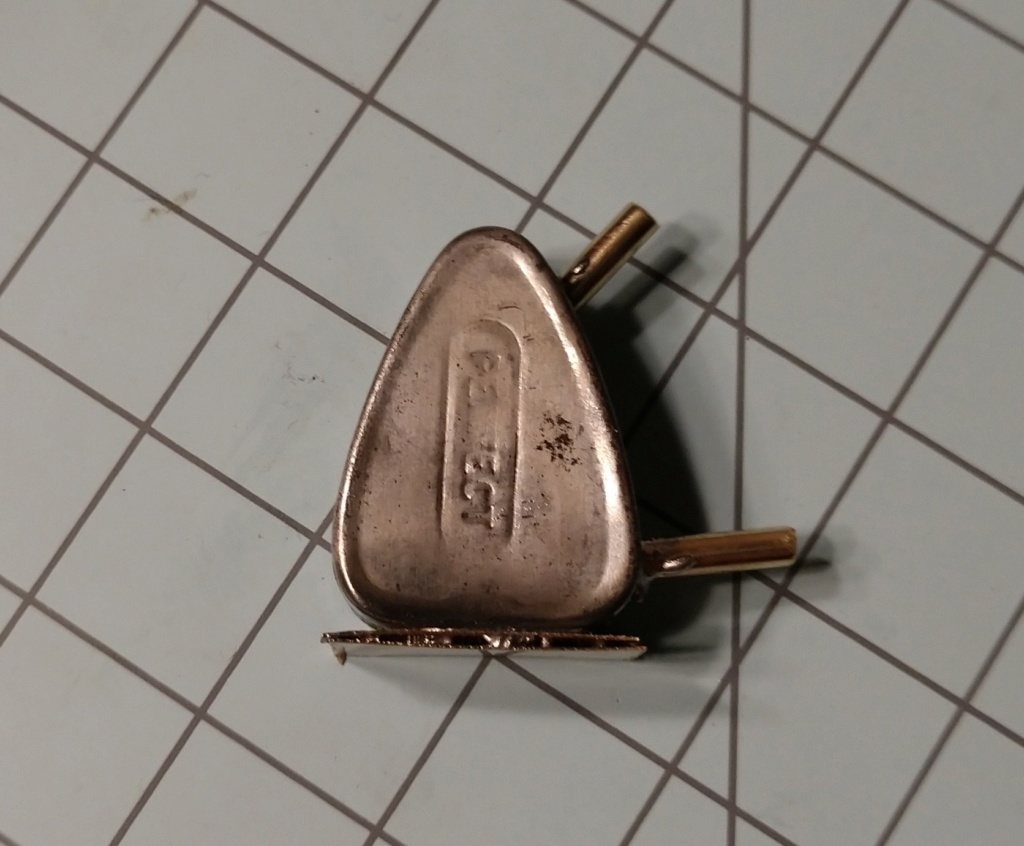 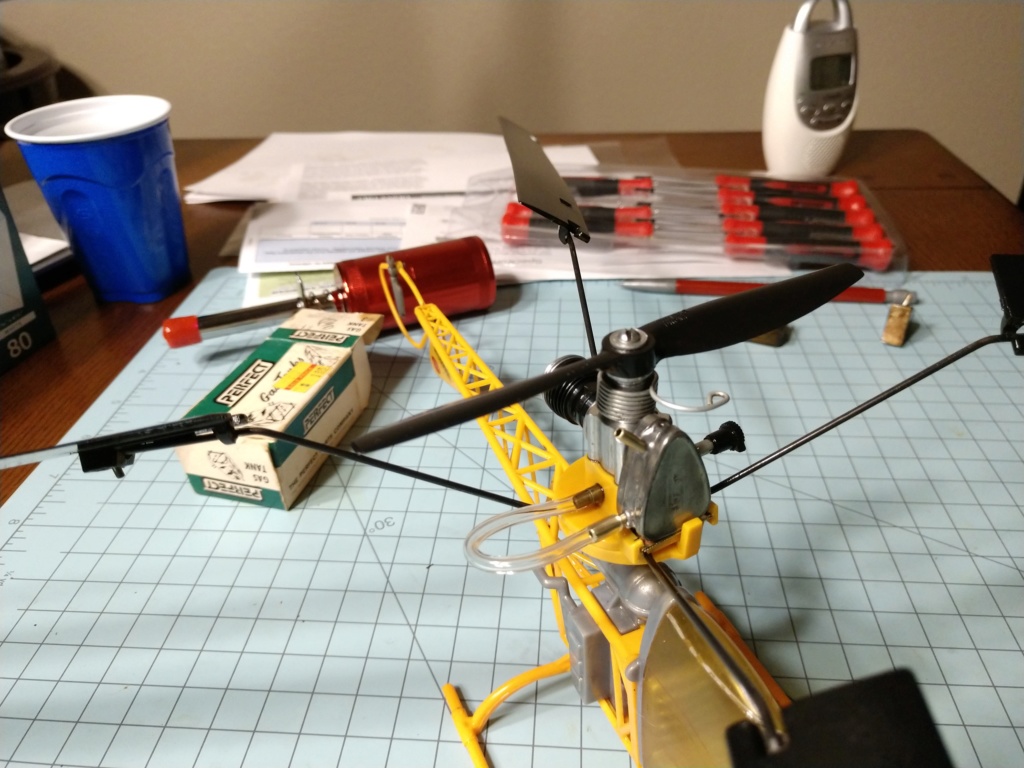 Good job to keep it running! If this was mine, I would at least try fixing the original as well. I would get me a small piece of copper or aluminum tube teh size you need and drill the original holes to fit it snugly then use JB Weld or the like to hold the tubing in place. Just a thought if you wanted to try repairing it. Looking at the tank, I would go with aluminum as it would better match the original color as well as JB Weld is grey also.

Good repair job, and the weight of the tank helps to counterbalance the engine's cylinder.

Wow. Sorry, my bad on my previous post. I took a look again, and now see the fuel tank location. Originally I thought it was below the engine, the silver colored piece below it. Please disregard what I had said earlier. I think I gotta study pictures better before opening my mouth......

I can see how that grey part could be mistaken for the tank. Unfortunately the original tank is beyond repair, that was my original plan but when I tried drilling out the holes for tubing I found that the plastic was very brittle throughout.

I'm not all that concerned about keeping the originality of this one I tact because I plan to fly it as often as I can. Just need to hope that nothing else breaks or that it flies away and gets lost. I do have another one that just needs cleaned up a bit and that will be my collection piece.

Nice looking repair , one of those tanks may not bee that hard to find ( most people take the engine off and use the .020 engine ))

That is a very good handmade replacement tank. Great idea I may have to use in the future. I have a small handfull of the 020 SkyCopter engines, most without the tanks. I did purchase a NIP tank from Cox International when Bernie came upon a stash of cox parts. Somewhere I read that the earlier SkyCopter came with a metal tank, but have never seen one. Here’s one one eBay that is priced higehr than gold.

I don’t think I’d pay that much for a small plastic tank, just to watch it fly away on a newly refurbished SkyCopter!!

I never seen a Skycopter with a metal tank. I owned them since they were first introduced. I'm not saying it's not possible. One thing is for certain is that the Ebay seller is obviously not in tune to what people are willing to offer or pay. The nipples broke off of those tanks when they were new and I can only imagine it's even more brittle 40 years later. The stock tanks actually had too much fuel in them which caused more than 6 of mine to go bye bye. The Perfect tank on there now certainly appears to be larger not to mention you can't see the fuel level prior to launching. A lean run of 30 seconds can put that thing into orbit.

That's a nice job on the replacement tank. I've never seen one of these fly. What happens when they run out of fuel? Do they autorotate and come back down slowly, or just drop out of the sky?
Could a fishing line or kite string tether be used on them to keep from losing them?

Having played with model rocketry, I'd think that on a very calm day, with a set of binoculars, once out of fuel, the blade pitch changes, they fall in auto-rotation fast enough that one could get it without it going OOS (out-of-sight).

Back in high school in the early 1970's, I had an Estes rocket called "Gyroc". It had flaps on the ends of its tail fins that were kept straight by the engine in place. Once ejection charge popped the engine out, the flaps would deploy, rocket would helicopter back to earth nose first.

It worked fine with the smaller rocket engines up to "B" size. Then I made the mistake of putting a C-6-7 engine into it. Take off impulse was so strong, it stripped one set of fins off during take off blast. It didn't helicopter recover. It sort of flit on the way down, hitting the ground hard enough to buckle the body tube.
Thus ended my beautiful Gyroc.

@getback wrote:Nice looking repair , one of those tanks may not bee that hard to find ( most people take the engine off and use the .020 engine ))

Do you still have one of those tanks and willing to sell?

@getback wrote:Nice looking repair , one of those tanks may not bee that hard to find ( most people take the engine off and use the .020 engine ))

Tru dat my brother, but have you seen what they go for on the bay(when they come up)?
Waaaay back, I sent one off to a fairly active member for zilch. I bought an engine plate
assembly for the piston/cylinder, and didn't need it. What was his name? I only remember
he was from Ireland.

I'm going to order one today and see if the tank works out.

Keep us informed , hopefully it will work out . Looks like he is in the reproduction business .