» Jim Walker's Interceptor Plan
by getback Today at 9:39 am

» What Were They Thinking to Remove Cylinder
by Surfer_kris Yesterday at 3:07 pm

» A wealth of 3D parts and more from Jason
by balogh Yesterday at 1:14 am

Last night was great for this Cox engine enthusiast! At our local RC club meeting, I aquired an old ratty box full of old ratty engines and parts. After getting home and sorting through it, I set aside the bits that I found most interesting. In this group, I discovered some fantastic restoration opportunities including a TD .010, an Olympic .15, a TD .15(It has a wristpin piston.), and an RR1!!! There is also a new condition McCoy .29 with no mounting marks on it, a real beauty. Not pictured are some more various sized Cox props, and some ragged out McCoy, Fox, and Supre Tigre CL engines. To make it even better, I got all this "junk" for free!!! It seems the deeper I get invested into this niche of the hobby, the more stuff like this ends up coming my way. The local guys know I'm the only one around that still runs and flies this stuff, so they usually turn me on to stashes like this when they come along. I was especially excited to finally score a RR1 for my collection. There's enough work here to keep me busy for a while! 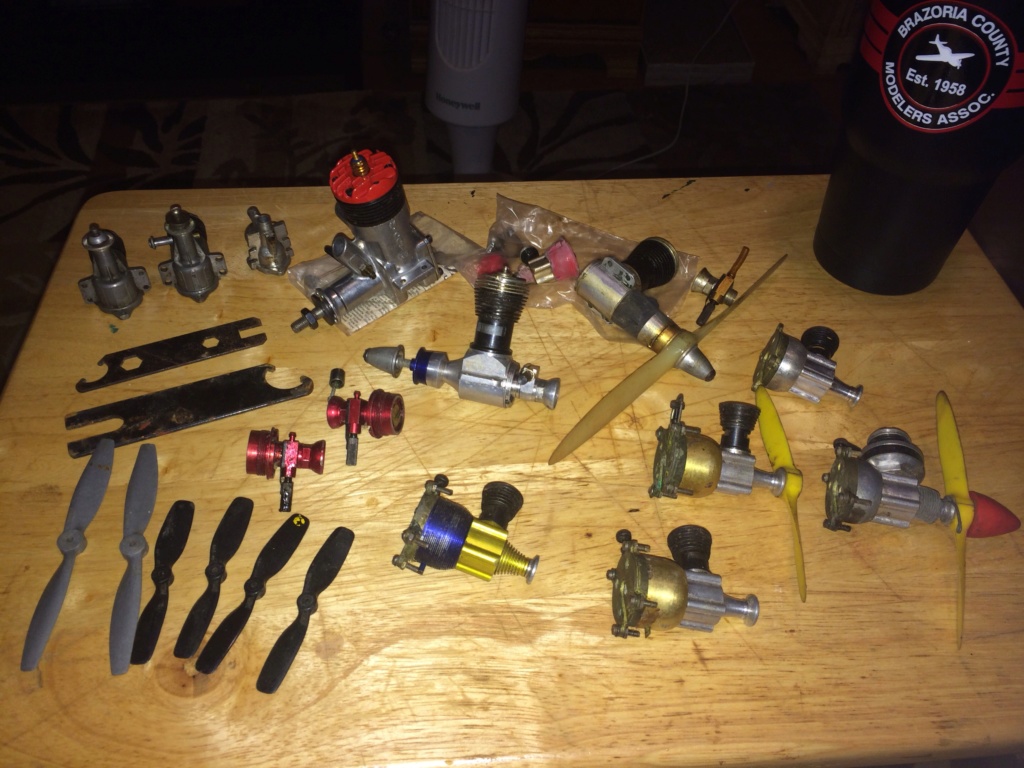 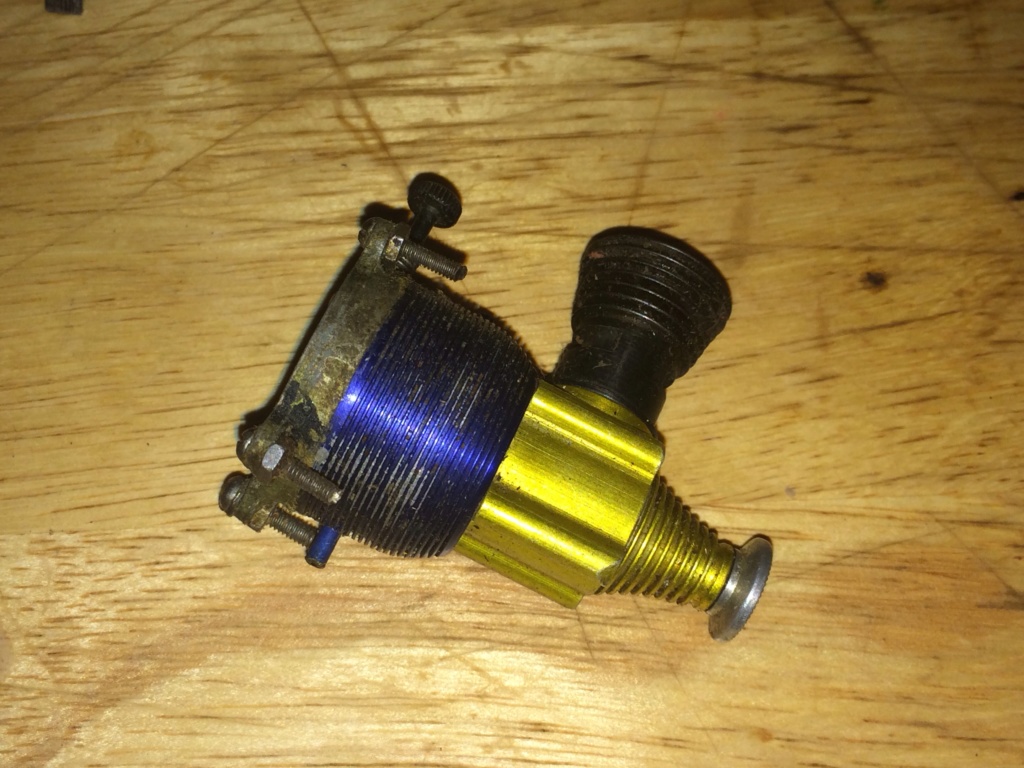 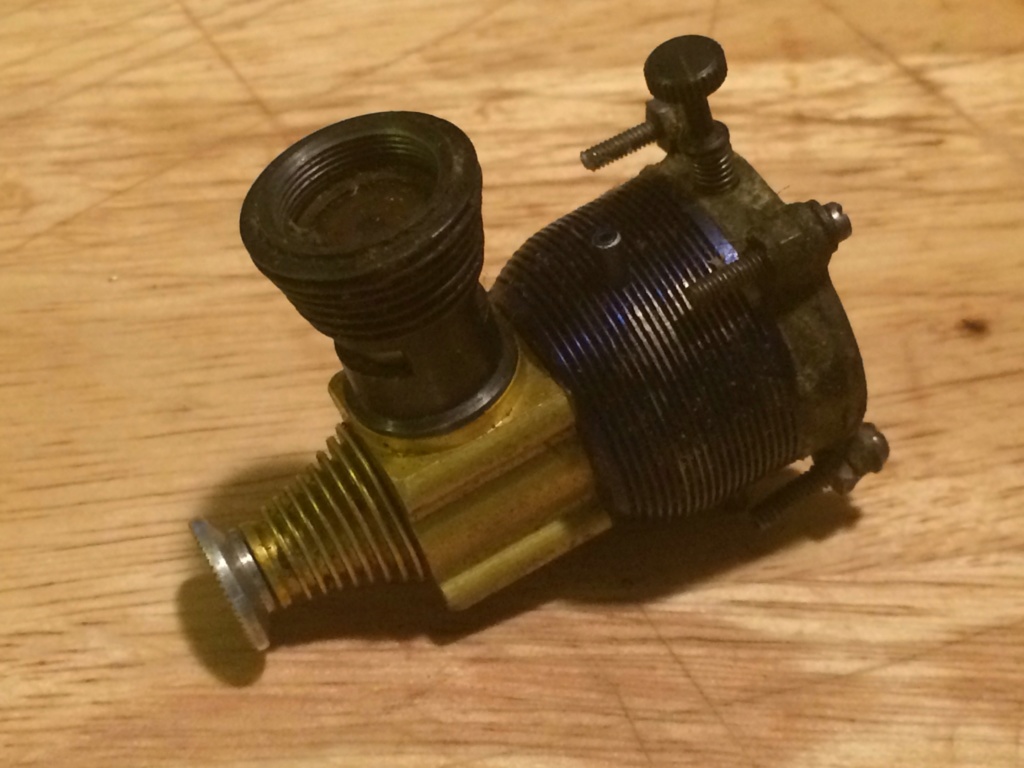 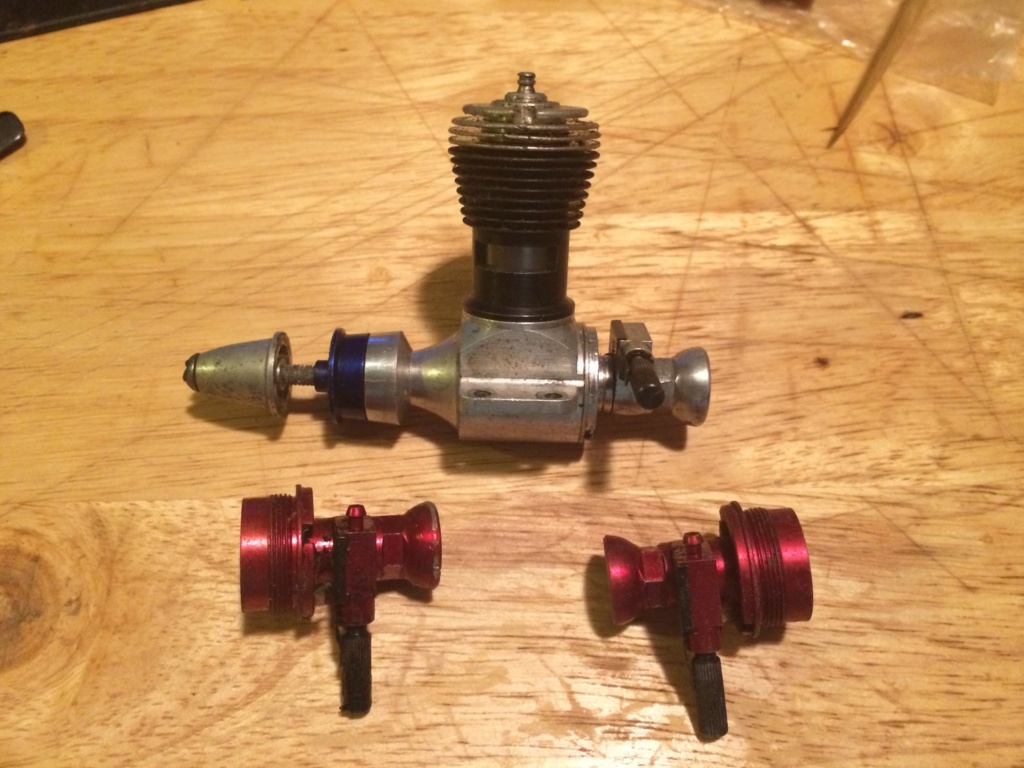 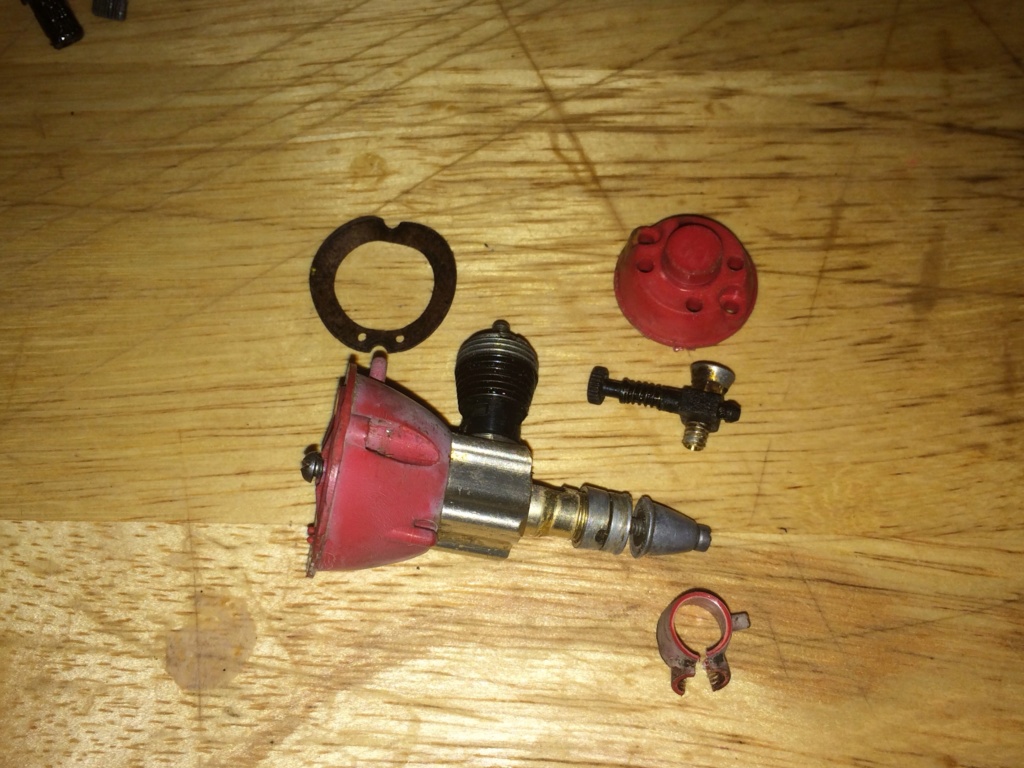 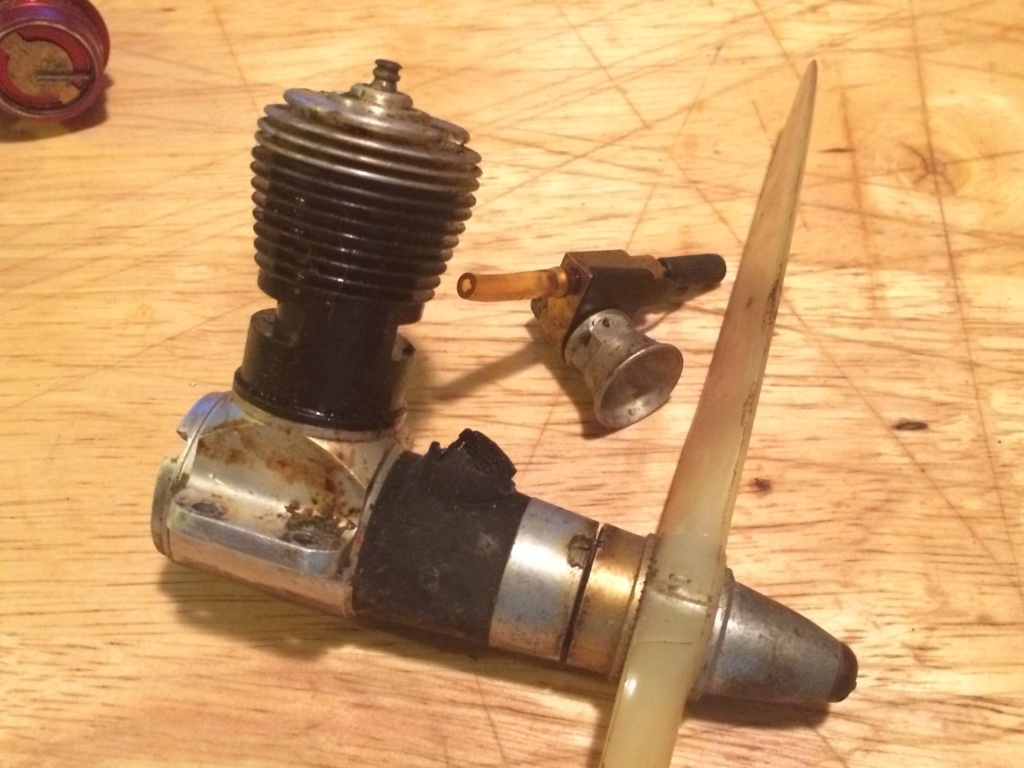 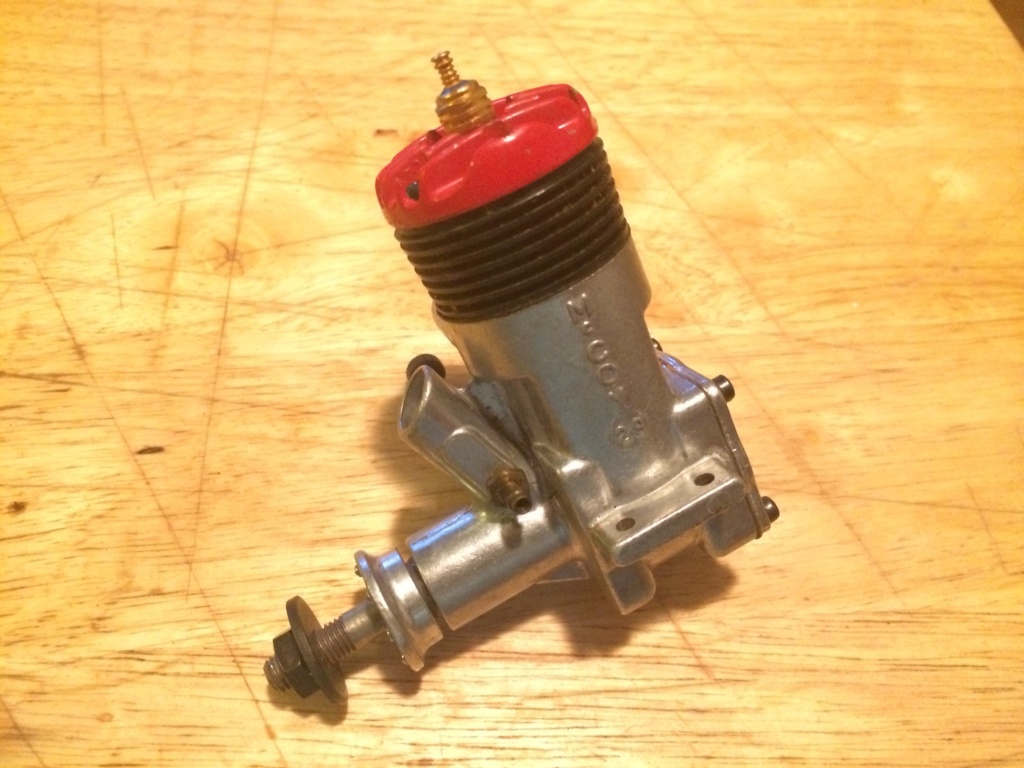 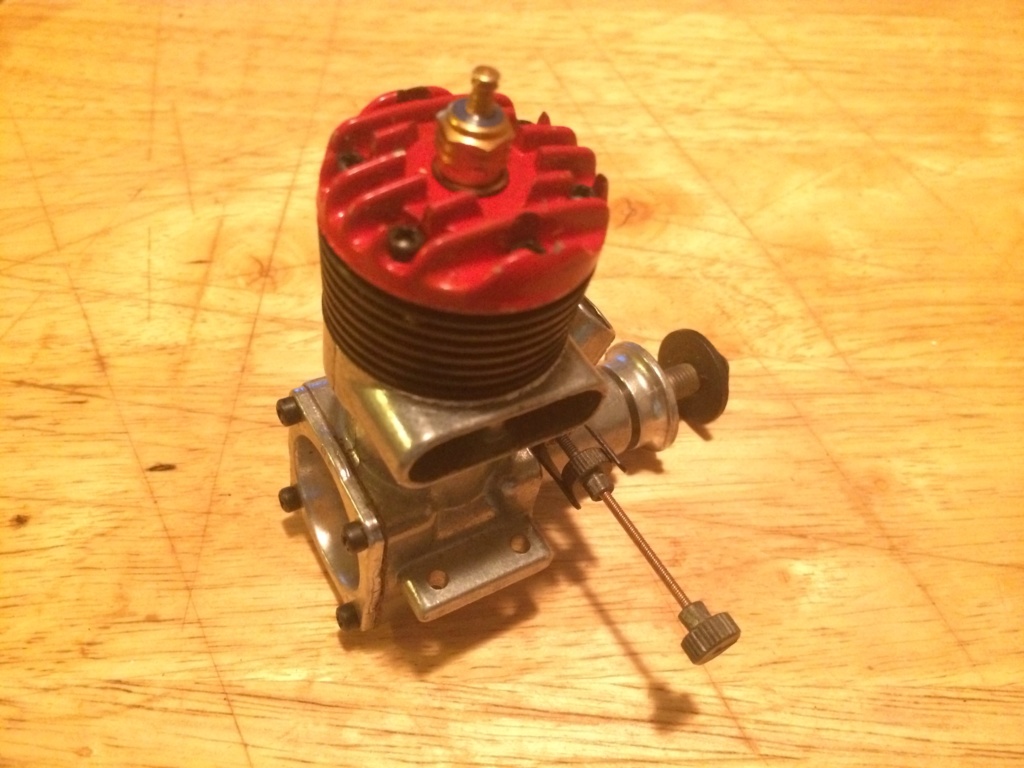 Thanks. I've been dabbling in the hobby again lately and look forward to trying to restore some of these gems back to operational status.

Man that's the Stuff there!! Good to have friends to help along with collecting and running engines ... In case you would bee interested in partying with one those Olimpia 15 Carb. assy. I would bee willing to buy or trade , i have one i just acquired and its pretty rough for a shelf queen thinking about running it but need to do a test then fit then i figure i would set her down .

Nice haul, and some good friends you got there. I love the Cox stuff, but, there has always been something about one of the older engines with a colored head on it that I like. The one you got looks very nice.

That is a nice pile of fun engines !

Those will keep you busy for a few hours

Thanks, guys! I've already started the tedious process of taking a couple of them apart. Lots of gummed up castor goo holding it all together. The RR1 looks to be mechanically sound inside!

The .010 got a new carb and a fancy Valentine spinner. It was severely gummed up and took lots of oil soaking to eventually free up. Still trying to get the fuel passages clear in the NVA but it will get there eventually.

The TD .15 is the second version, the Special. It has a wrist pin connection instead of the ball/socket but lacks the thicker, single-sided exhaust port and gold anodized case of the MKII Special, which followed. Compression is good. Spent some time polishing, degumming, and replaced the carb with a new one. I now have all 3 versions of the TD .15! 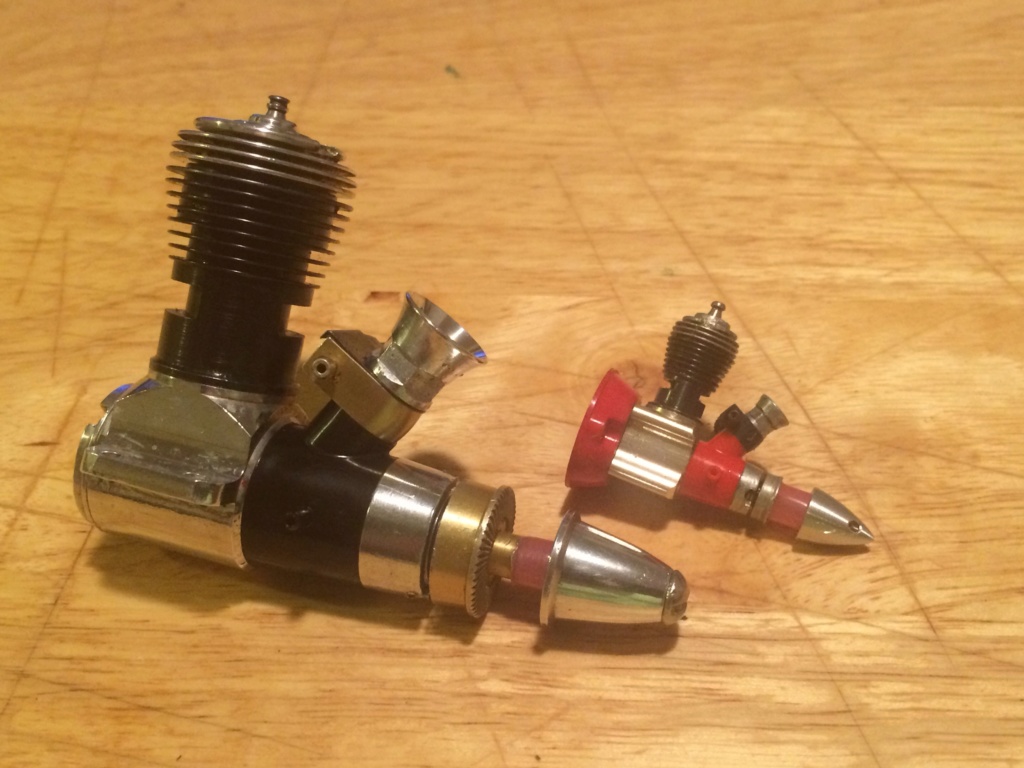 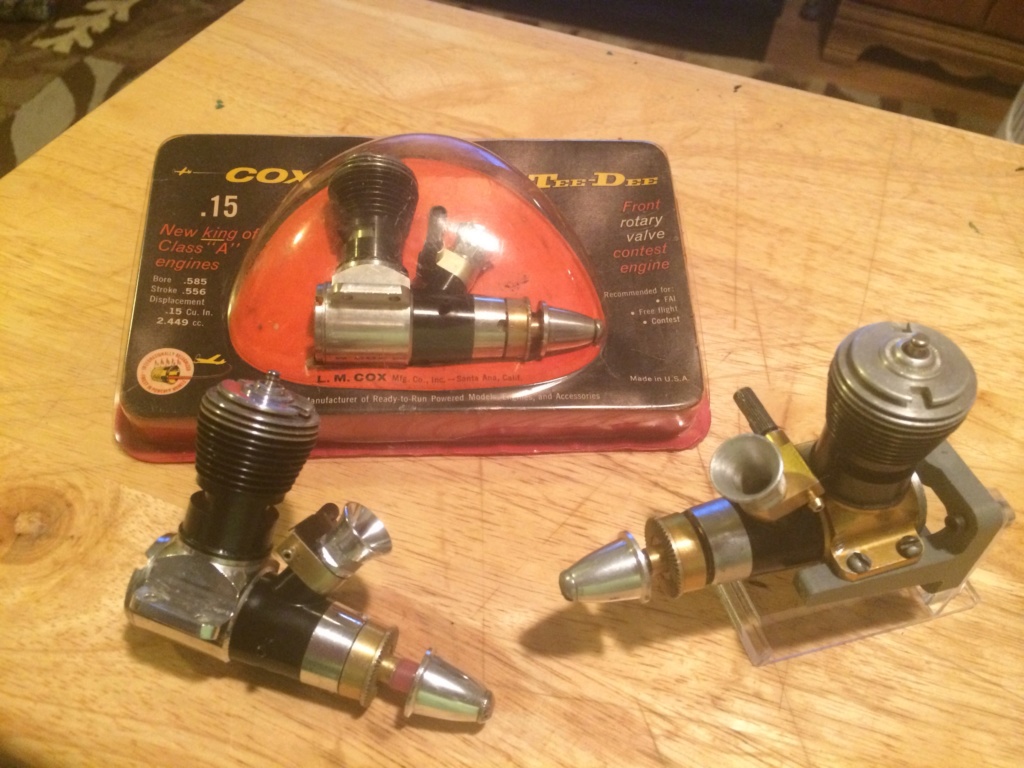 RE: Scored some goodies

What a nice fleet of engines !!, a lot to have fun with those pieces

Thanks, guys! I've been having fun with them, for sure. The pile of free engines has cost me more than $100 so far in parts and such so far but still a bargain. Mauricio, I'm sure the .010 will find it's way to a firewall someday. I currently have 3 .010 planes in operation, so it's always nice to have another working spare engine on standby when at the field. Since replacement .010 pistons and cylinders are practically non-existent these days, I'll always gladly accept free donor parts engines.

The Olympic .15 is still awaiting parts arrival but I'm mostly excited about sharing the results of the RR1 restoration when it's done. Stay tuned...

You have .15 size planes for any those babys ?

Thanks Eric! I don't have anything flyable for a Cox .15 yet. I need to select and build something, another project to add to the long list. I now have a neat set of Cox .15s including all 3 TDs, a Medallion, a Medallion RC(with throttle ring), an Olympic, and a Sportsman. I don't own a Conquest but they don't really appeal to me for some reason since they look more like a K&B. Several of them were gifts and a couple were from swap meets over a period of many years. A couple came from ebay. I hate to admit it but I have yet to run any of my .15s. Seems I keep running, flying, and building planes for the smaller ones. It's just a matter of time.

The .010 got a new carb and a fancy Valentine spinner.  It was severely gummed up and took lots of oil soaking to eventually free up.  Still trying to get the fuel passages clear in the NVA but it will get there eventually.

The TD .15 is the second version, the Special.  It has a wrist pin connection instead of the ball/socket but lacks the thicker, single-sided exhaust port and gold anodized case of the MKII Special, which followed.  Compression is good.  Spent some time polishing, degumming, and replaced the carb with a new one.  I now have all 3 versions of the TD .15!

Nice! When I work on rebuilds for the 010 I usually run a 1/64" drill bit through the venturi holes and holes in the needle valve body. Slightly smaller than the actual size and helps to remove all the crap that kills performance.

Good idea, Matt! Thanks. BTW, I think I just just ordered your last .15 glow head. It only allowed 1 in my cart.

I've been having fun restoring these guys. The Olympic .15 cleaned up pretty well with some effort and time. It was missing the starter spring but Cox Int had some in stock. As luck would have it, both the .15s had TD heads on them and they still work!!! That's good because spares seem very scarce. More in the works..... 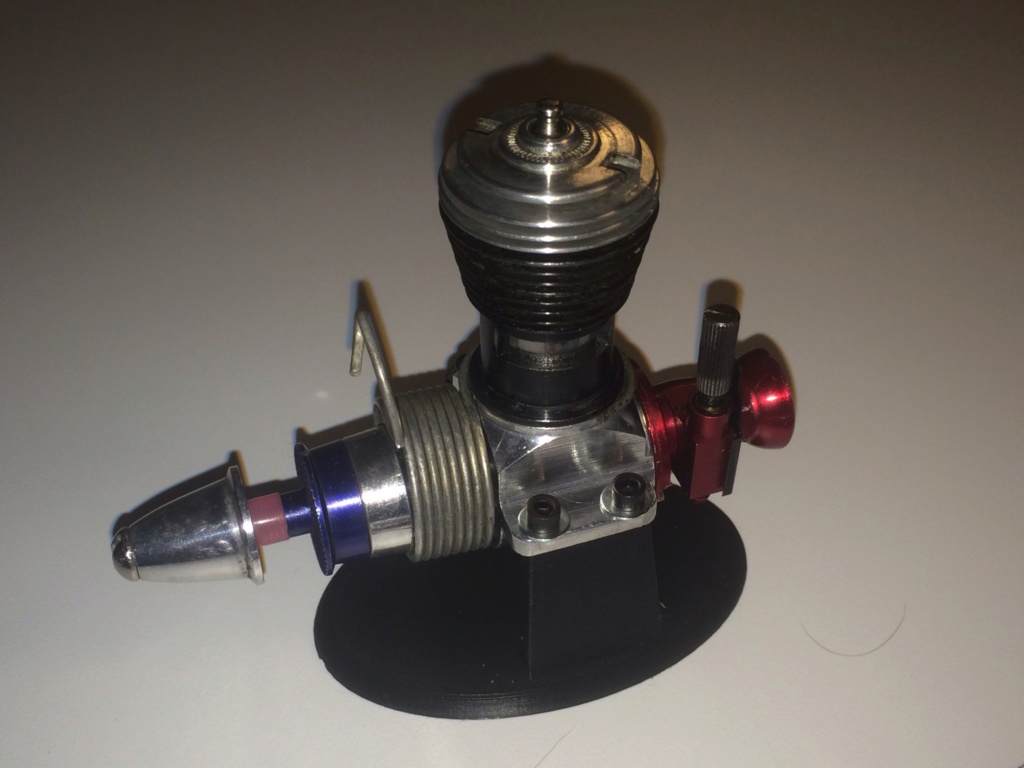 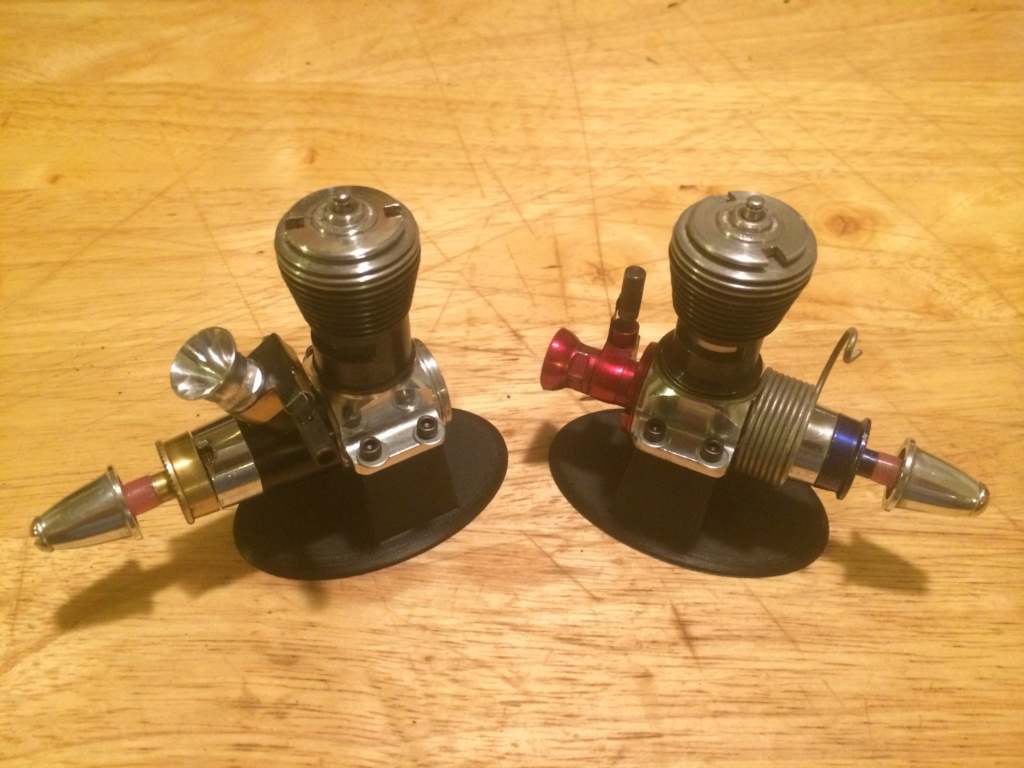 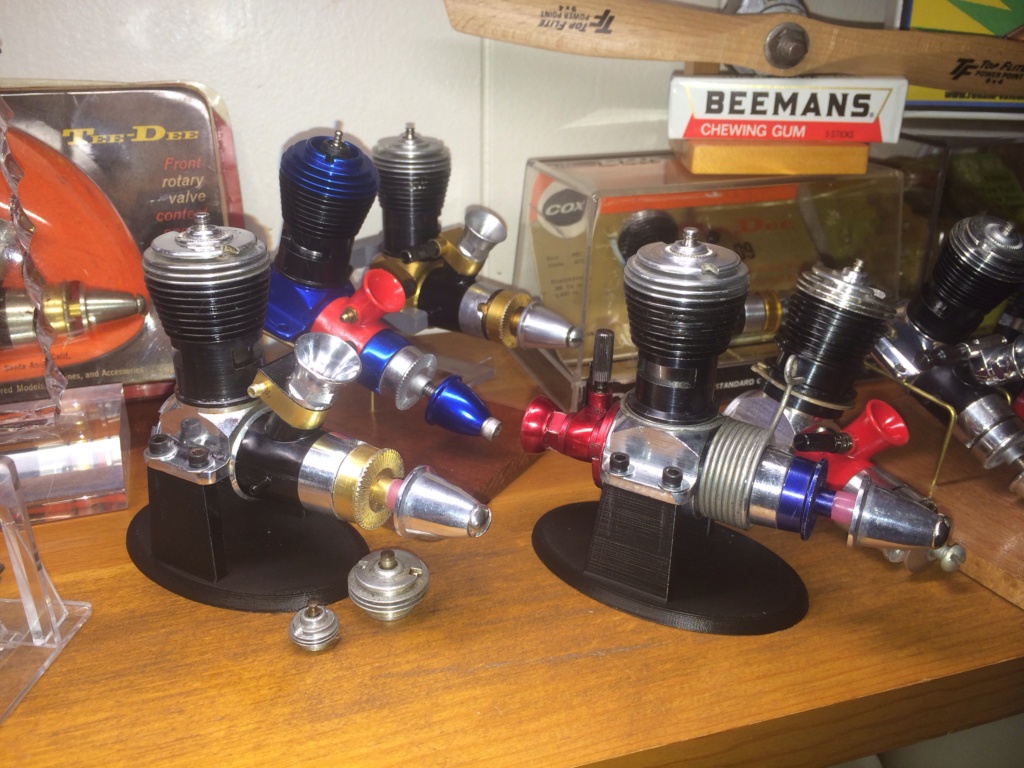 Looking good. Great job of shining them up.

I got the RR1 back together today and am very happy with it! The tank was spiffed up and re-anodized back to it's original blue. The backplate had some minor scratches, corrosion, and tarnishing so it was worked smooth again and polished to a mirror finish. With a new spinner, fuel line, and glow head, she was lookin' good as new. The guy who did the tank and backplate work wants it to run and fly, not just sit on a shelf. I intend to make good on that promise soon. 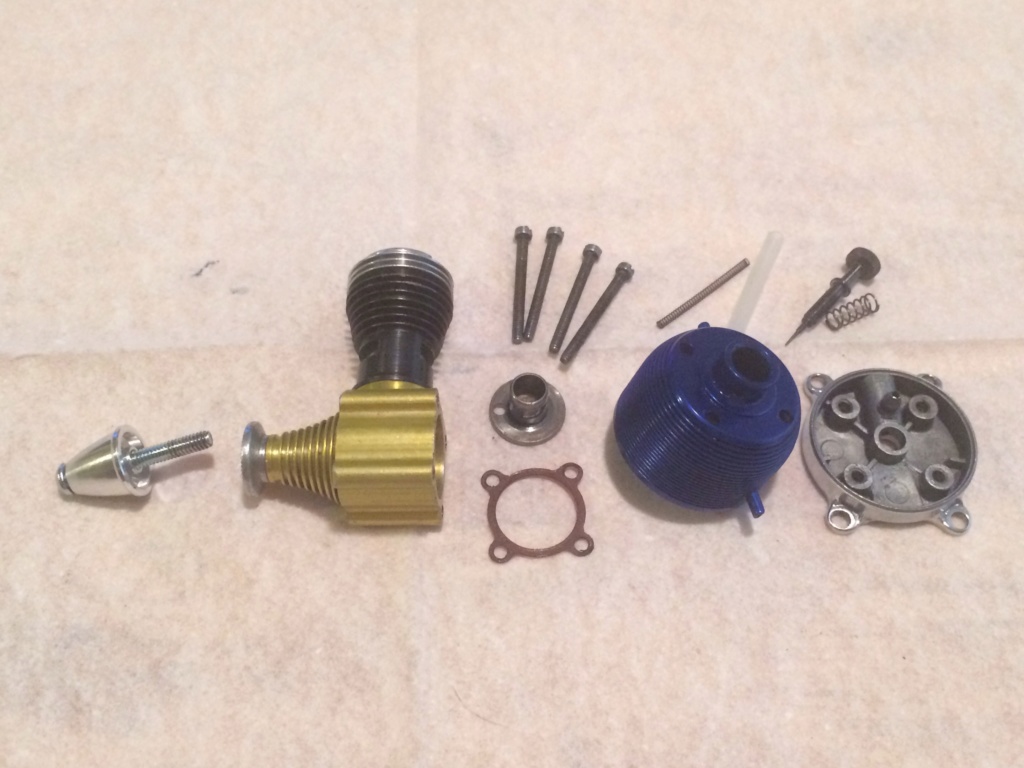 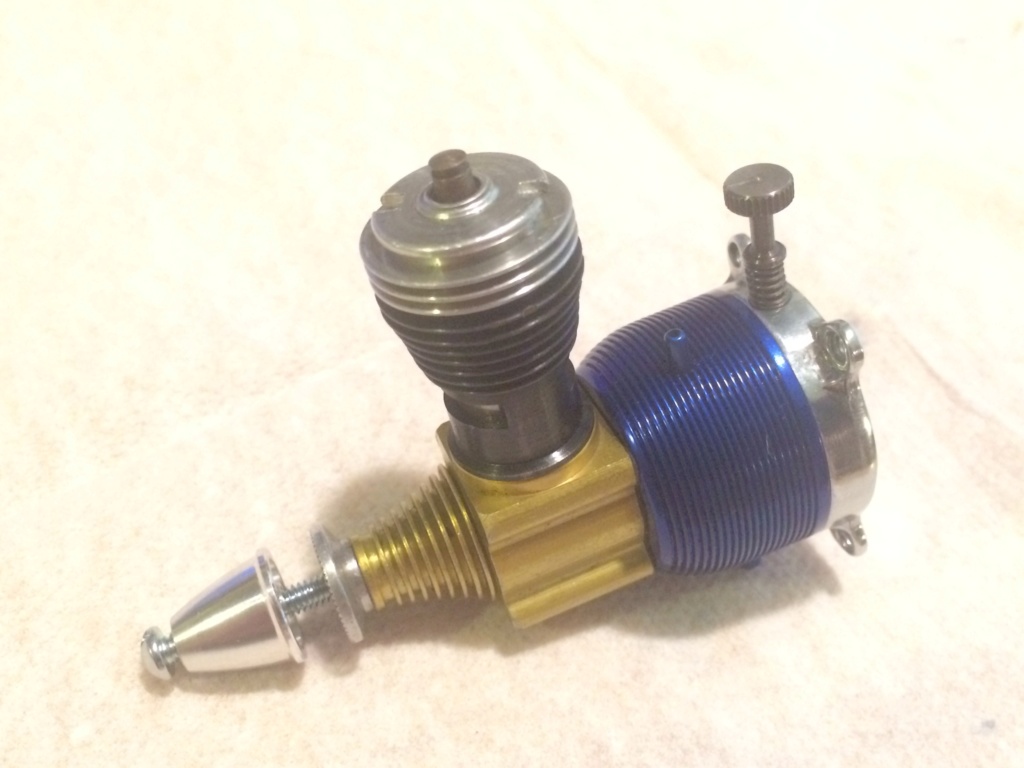 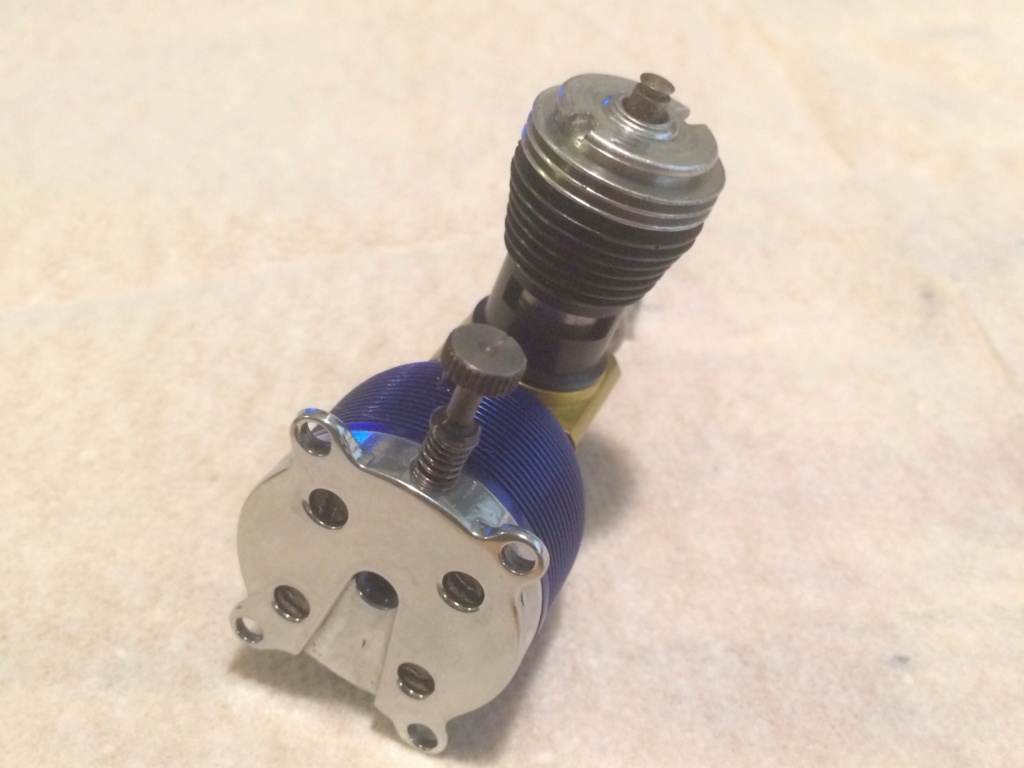