Philly Fliers had their 2 day contest this weekend. Yesterday was profile and old time stunt, today was PAMPA stunt . My son Shawn did quite well flying the 900 sq Magician. This plane is quite large and it flew the pattern with authority. Enya .60 powered, it sucks down every bit of 8 oz's in 7 minutes. In the pic, the other Magician is the standard sized Magician. I was enjoying watching him put it through the paces. The hourglass was just impressive. Just to get a idea of the size, here's a pic of Shawn and another pilot with his Magician. Shawn put in a nice pattern taking 1st place . 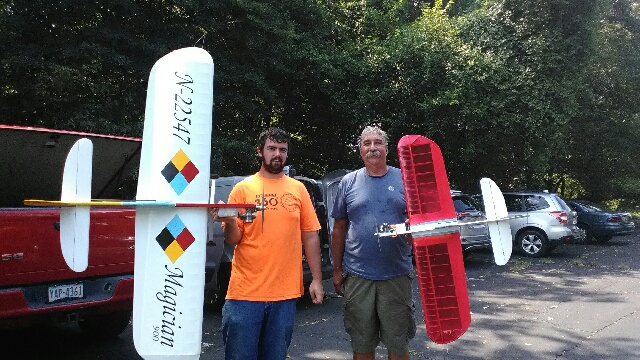 Nice!! How long were lines?

Your total line length center of eyelet to center of eyelet  can't exceed 70'. I think my lines were 65'.  The safety circle which was painted on the grass was exactly 70'. In my opinion, they should've offered a additional few feet for safety.  I stayed outside the circle because I had to keep telling others not to get too close. When you fly consecutive maneuvers such as the 3 inside loops and outsides, the pilot has to take a few steps back to not fly into your turbulence. Seeing that these maneuvers are completed at the 5' bottom, many people were not paying attention walking around the pit area with their back to the active circle.

I really like that Magician Ken. I have one unbuilt, not that size of course. I am on the fence with planes bigger than .45 size. I have a Saturn with a Ro-Jett .65 and it pulls extremely hard. I am not weak by any means, but it just wasn’t comfortable. I have only flown it once, maybe something can be done with the leadouts or rudder offset. It has offset in it, maybe it doesn’t need it. I didn’t build it so I flew it as built.

Glad you guys were able to get out and enjoy yourselves.

Total envy. I would love to be able to do that again.

Ron, I agree with your solutions. Offering even a degree of engine inset can also assist. This Magician pulls but not your arm off. It's more maneuverable than a combat plane. It certainly is a bit tail heavy. Not by much, but I'm thinking a aluminum spinner will help that. I run it essentially very rich and the line tension is terrific everywhere. Pat King designed this plane and my hats off to him for providing a beautiful kit. One thing I will say about .60 size engines, they're very forgiving. I was getting one flip starts as well.

rsv1cox wrote:Total envy.  I would love to be able to do that again.

Anyway, I bet you were able to experience things that some of us were unable to.

rsv1cox wrote:Total envy.  I would love to be able to do that again.

Anyway, I bet you were able to experience things that some of us were unable to.

I could tell stories Ron, but I was a teen in the early fifties.  Guns, girls, and cars. Rock and roll was just around the corner, but we had Elvis, Joni James and Mitchel, Buddy Holly, Dion, Connie Francis,  Jerry Vale, Everly Brothers, etc. etc. No one locked their doors and crime was something NYC worried about.

Growing up I almost drowned, twice. Hit by a car, tossed in the air and ran over when I was four, six weeks in the hospital to put me back together.  Juvenile court when I was 12, mostly on my own at 14.  Saved by a girl when I was 18 and never looked back. Successful, prosperous, and happy until March 13'th 2015 then I lost her.

I never got dizzy flying C/L from about 16 to 45. Then I stopped flying C/L.  Tried it again here about six years ago fell down, a couple more times convinced me it was time to quit.  Still, the urge is there and I have this stooge...……….

Apologies for the book and the Jack....

I always hear the saying that modellers get into less trouble. I can't really prove that as it didn't always keep me out of trouble. I suppose it had it's benefits. As for myself and my son, it made carpenters out of both of us. I've been a member of the Philly Fliers for 19 years. I've attended many contest at our club through the years. The past few years for both of us have been idle due to work. I went and looked back to check and this is the first time either one of us placed 1st at our club flying stunt. There were 10 pilots in profile and they were all good. The sad part is, many of our club members are older. They fly less and less and some have passed on. It's not so much about money oddly, it's more about participation. Here's a pic of us on Sunday https://www.facebook.com/PhillyFliersCL/photos/pcb.2927396063997175/2927394517330663/?type=3&theater

I know it didn't keep my ass out of trouble.

Similar topics
» Scored an R/C Pee Wee!
» Scored Some Goodies!
» Here's what I scored at the local antique show, anybody want this?