In some countries it is becoming more difficult to obtain Methnanol. In Germany, for instance, there is fuel being sold (25% Nitro) that contains Ethanol instead of Methnanol. Any downside for running a Cox engine with that mix?

Just doing a online search on the subject:

Ethanol vs. Methanol.
Ethanol is less chemically toxic than methanol, and it carries more energy per gallon.
Ethanol contains about 75 percent of the energy of gasoline per gallon, compared to 67 percent for methanol. ...
Methanol is more corrosive than ethanol.

The Environmental Protection Agency has approved gasoline with 15 percent ethanol for use in cars year 2001 or newer, yet it prohibits
its use in mowers and other power equipment, stating it may cause damage. ... But even gas with the usual 10 percent ethanol (E10)
could help destroy small engines.

Ethanol attracts water. Water enters your fuel system in the air that enters the fuel tank as the gasoline is burned by the engine.
The water is drawn into the fuel, making for a chemical mix that accelerates corrosion of metal parts in the engine. ...fuel can also
oxidize or rust just like iron or steel.

Thanks for the reply but, with 20% oil (of which at least 50% is castor), would that not negate most or all of the corrosion potential?

Nitro is worse for attracting moisture so that and the ethanol fuel will demand attention to after run oil even more so.
Ethanol does not take the heat away from the charge air as well as methanol so the engines will run hotter / a bit more
oil will help or extra nitro.

Methanol also absorbs moisture from it’ surroundings, including moisture from the air.
I believe hygroscopic is the technical term.

In the days before the Great (undrinkable) Liquid Corn Scam of Bob Dole-Big Ag. et al., denatured ethanol was something that we added from a little plastic bottle we bought at the auto parts store to our gas tanks in order to draw the condensed water out of our fuel systems and vaporize it out the exhaust. We did this on an OCCASIONAL and voluntary basis. And it was probably a good idea. Not so anymore.

I also have a friend who works R&D at a major outdoor power equipment manufacturer and they do a chemical assay on every jerry can of gasoline that they buy from an assortment of gas retailers in the area. He told me that the 10% ethanol gasoline sold around here always tested between 6% and 7% in their labs.

As noted, ethanol is highly hygroscopic -- it is this characteristic that forms the basis for consumer testing for ethanol in gasoline.

I do a lot of small engine repair.  If I had to rely strictly on my repair income, ethanol would be the big money maker.  While its tendency to absorb water can be problematic, the greatest damage done in small engines is to the rubber o-rings and diaphragms found in many of the consumer engines today.  If gasoline containing ethanol is left in carbs and tanks over the winter season, the rubber tends to harden and crack.  I would guess that 90% of my repair work is carb cleaning and parts replacement.

Methanol is also hygroscopic and we find rust formation on cranks and bearings in engines that have been stored for a period of time without having been run completely dry or having had an after run oil added.  Castor was a big player is helping to prevent this, mostly due to its ability to coat internal parts.

Personally, I would have no problem running an ethanol based fuel, but would always ensure that the engine was run completely out of fuel.  Secondly, a little after run oil added at the end of the day will be good insurance.  My preference is either air tool oil since it has anti-corrosion additives or a 50/50 mix of Marvel Mystery Oil and ATF.

Amen Andrew. I'll bet that 95% of all the homeowner gasoline generators in the country on any given day will not start up for the very reasons you stated.

One thing that hasn't been mentioned is whether ethanol has the same catalytic reaction with the platinum glow element as methanol does. Bernie mentions that etahnol fuel is being sold in Germany, so one must assume that the reaction is similar

OS sold an ethanol engine line maybe 10 years ago, primarily in South America. Glow plugs do work with ethanol, but plug and compression ratio can be optimized to work best.

If no changes are made, an engine will make less power on ethanol based fuel. Hmm, I have some E85 in a jug, but it's several years old. I flew some spark Enya 46-4C and OS FS-52 on E85 for a while.

In terms of corrosion, methanol and ethanol are similar. Compared to neat gasoline, either is miserable. Virtually any seal suitable for methonal will also be OK with ethanol.

Interesting since the energy content of ethanol is around 30 to 33% greater than methanol. If engine tuning can be optimized, then I would think that run times per tank should be higher.

FAI fuel contains only methanol and oil and has been used in Europe more so than the US. But, I don't know how well smaller displacement engines would run without nitromethane. OTOH, denatured alcohol (Klean Strip Denatured Alcohol: $6.50/QT @ Walmart) is readily available and the SDS states it is a combination of methanol and ethanol. A quart of denatured alcohol and some Klotz BeNol and presto, FAI fuel. It would be a cheap experiment.

I tried no nitro ethanol fuel (FAI ethanol) in Cox Babe Bee. Engine didn't start any, only a hissle can be heard (ethyl alcohol burning).

The reason why ethanol causes damage to 2 stroke engines
Is that e 10 absorbs h2o all is fine until you mix the oil
Oil does not mix with water hence the damage to all our 2 stroke outdoor
Power equipment e10 is used extensively in the australiantaxi industry
In toyota hybrids and is the way to go ( iowned 2 of em ) no problems in 0ver
800.000 km
Bit off topic but thats the way it is
Thanks rex r.

Ethanol in aust is available as methylated spirits off the shelf at the grocer or hardware
Store used to increase laps in team race engines at about 50% of total content the reason
It is called methylated spirits is that it contains 5% methanol by law so as to act as a
Deterrent to the drunks who drink it making them sick or blind
Just a bit of trivia for those unaware
Thanks rexf.

@andrew wrote:Interesting since the energy content of ethanol is around 30 to 33% greater than methanol.  If engine tuning can be optimized, then I would think that run times per tank should be higher.

Energy density and air fuel ratio are unrelated characteristics. You will burn less ethanol than methanol for sure. Tuning would involve compression and plug heat range.

As far as ethanol in gasoline, the ethanol itself isn't the issue. It's water, that over time makes it's way into the fuel if stored improperly. Water causing trouble in fuel predates ethanol. This isn't a problem anymore in cars because fuel systems are tightly sealed. Forget to tighten the gas cap? Your car will tell you. Gas "cans" have for years now been very air tight to prevent gas from boiling off, but also to prevent water from getting in.

Let your car sit parked six weeks with a half tank of E10 in it and you'll likely get a good solid lesson in both water in fuel lines and phase separation of fuel mixture.

@ticomareado wrote:Let your car sit parked six weeks with a half tank of E10 in it and you'll likely get a good solid lesson in both water in fuel lines and phase separation of fuel mixture.

I do this all the time with my car and have for something like 10 years now? 2000 mi per year?

@ticomareado wrote:Let your car sit parked six weeks with a half tank of E10 in it and you'll likely get a good solid lesson in both water in fuel lines and phase separation of fuel mixture.

My son's car was sitting for over 6 months and it ran fine. He took it in for an emission test and it failed because of stale gas though. My cars often sit over the winter with no problem but I don't keep it full. A guy that works at the Home Depot rental centre (model airplane guy) says they don't keep fuel mix for more than a month. As for ethanol/methanol, I was under the impression that ethanol did not react with the glow plugs very well, and needed on board voltage to keep lit. Maybe the hottest plug may help? Perhaps the Cox stuff may be OK because they don't need an idle. I have not tried it myself because ethanol would cost more and is hard to find here. I had considered E85 to mix with a possible mineral 2 stroke oil to keep costs down for the model planes. The castor oil and Klotz synthetic is quite expensive here after the exchange rate. We can't get E85 fuel here but Detroit is very close, and the price is good. I am sure there is some mixture that would work with ethanol, maybe add 2% acetone. Some guys are using it as a nitro replacement. It does not give more power but the motors run better.

@Cox International wrote:Thanks to all of the responses but the thread was started in regards to running Cox engines 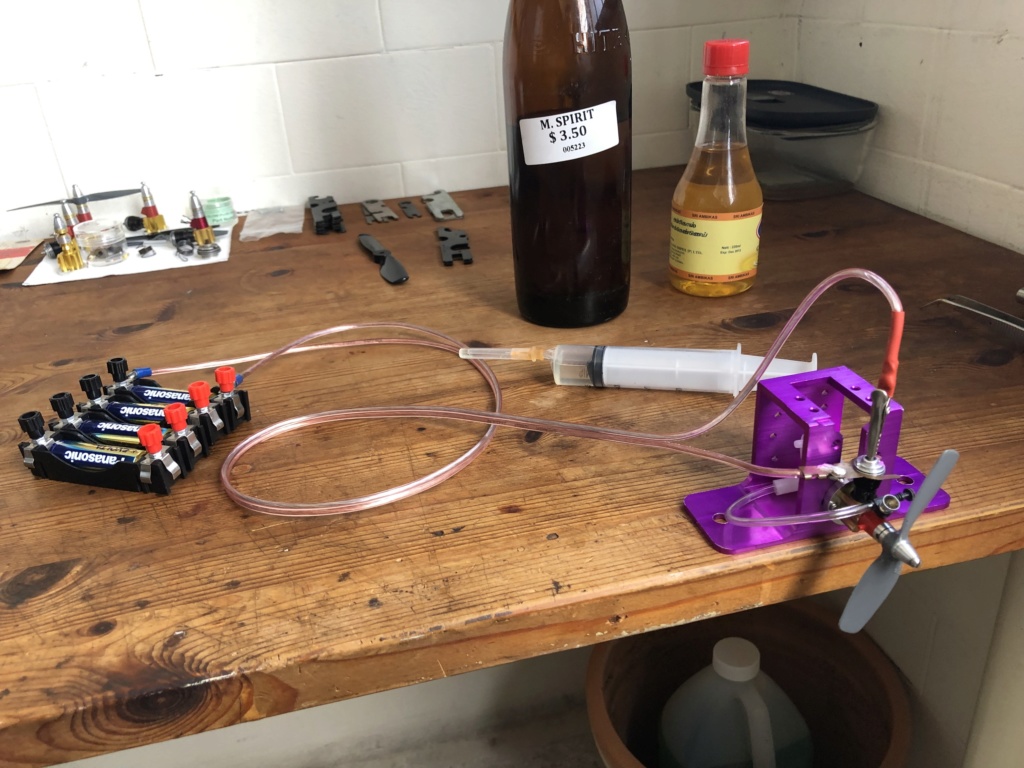 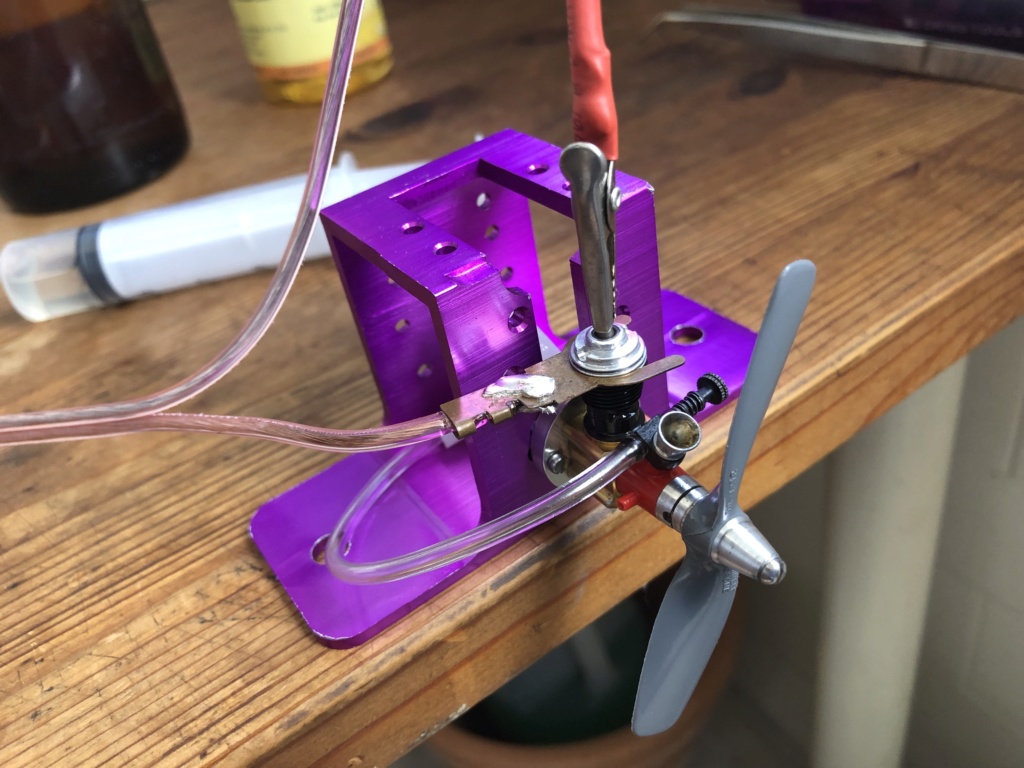 In conclusion, you can run cox as small as 0.010 with ethanol (methylated spirit, may be methanols 1-2% in it).
But you can't take out battery connection from glow head. I tried take it out and the engine stop running once battery connection cut.

Will this fuel mix "Ethanol with 20% castor" have bad effect on my engine??

Without any methanol I do not think the reaction catalyzes properly for glow engines. I do not know the lower limit.

American denatured alcohol, which is typically 50/50 ethanol/methanol (find and read the MSDS as it will not be on the can) when mixed with a proper quantity of oil will run glow engines, including Cox .049 engines, acceptably well. I have mixed up and used denatured before with reasonable results. Power seemed comparable to mixing up yellow HEET (pure methanol) and castor. (I then learned about pre mixed fuel sources and stopped experimenting.)

There is still methanol up to 5% in methylated spirit, so the engine will run. I felt the power and RPM is low and can not discontinue battery from glow head.

@gkamysz wrote:OS sold an ethanol engine line maybe 10 years ago, primarily in South America. Glow plugs do work with ethanol, but plug and compression ratio can be optimized to work best.

In terms of corrosion, methanol and ethanol are similar. Compared to neat gasoline, either is miserable. Virtually any seal suitable for methonal will also be OK with ethanol.

My comment from above. In very small engines it might be that with compression ratio and heat losses, it may not be possible to get it to run well. Ethanol will not directly damage the engine, though I would be more concerned about rust.