Log in
Search
Latest topics
» Still don't get it.
by aspeed Today at 12:43 pm

» Man cave, or it's amazing how much you can accomplish on a rainy day
by rsv1cox Today at 12:34 pm

» When Everybody Flew with Spark Plugs or Diesels
by Ken Cook Yesterday at 2:25 pm

In the "Official Endurance Run Time Thread", there was enough info to calculate efficiency of the motor.

My first guess was 10%.
My first stab at the math shows 5.27%.
Can the smart guys chime in and see if my math is correct? tia 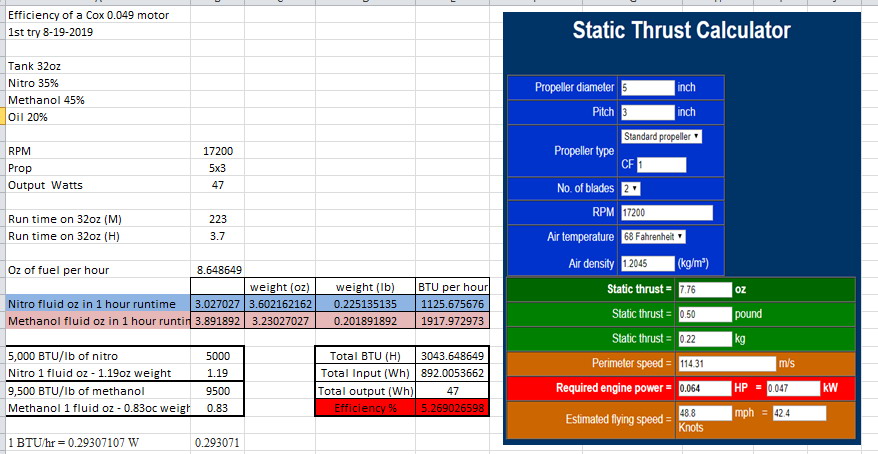 Definitely not as efficient as a Continental A-65.

Yes, it is correct. Thanks.

Cylinder/piston and crankshaft/crankcase friction powers cause a big loss, I think.

Apart from internal friction a lot of fuel is wasted through the exhaust in 2 stroke engines when shooting the charge from the crankcase into the cylinder..and a lot of heat departs the Carnot  cycle in the shape of hot unburnt castor leaving with the exhaust gases...

The prop power calc on that website may also not be correct in assuming the static efficiency of the actual prop used, but this may only cause a smaller inaccuracy in the engine efficiency calc.

Notwithstanding, I love them..

Poor scavenging causes poor efficiency in two stroke engines. Friction exists in all engines, but is hardly the reason these are so bad.

Lubricant should be included, even if you assume it's not burning.

Despite all you read, oil contributes very little to direct cooling.

@gkamysz wrote:Poor scavenging causes poor efficiency in two stroke engines. Friction exists in all engines, but is hardly the reason these are so bad.

Lubricant should be included, even if you assume it's not burning.

Despite all you read, oil contributes very little to direct cooling.

Regarding anti-earth, 5% EFF is pretty bad, besides the burnt fuel, the unburnt fuel is even worse and then tossing 6.4 oz of oil everywhere for that endurance run.

Here is the biggest anti-earth I know of. 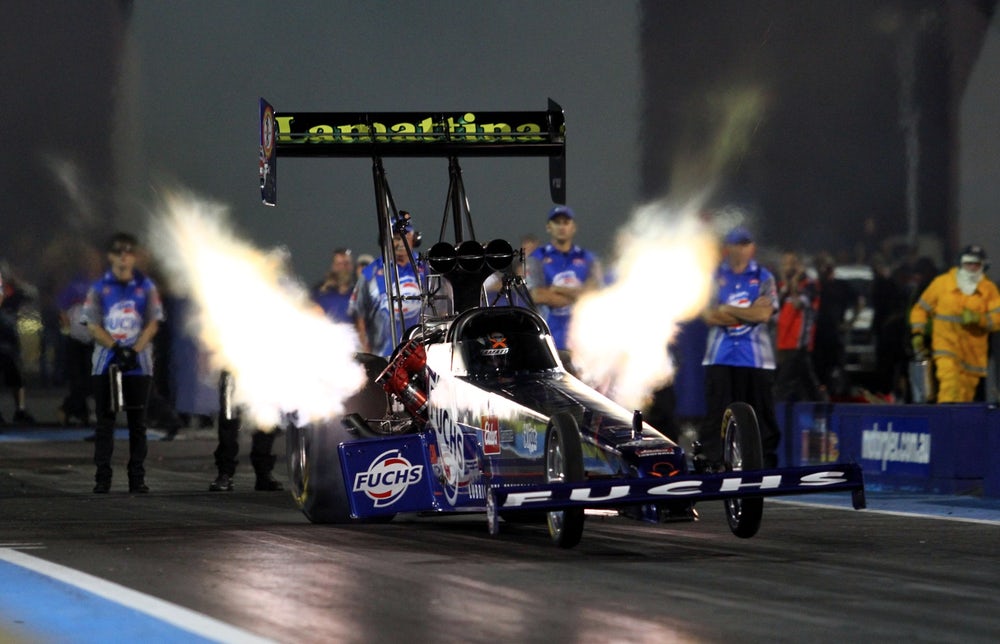 From reading top fuel consumes 5 gallons of fuel in a run, outputting 7.5MW, they are twice the efficiency of a 2 stroke cox reed valve 049. Please correct me if something is wrong, tia. 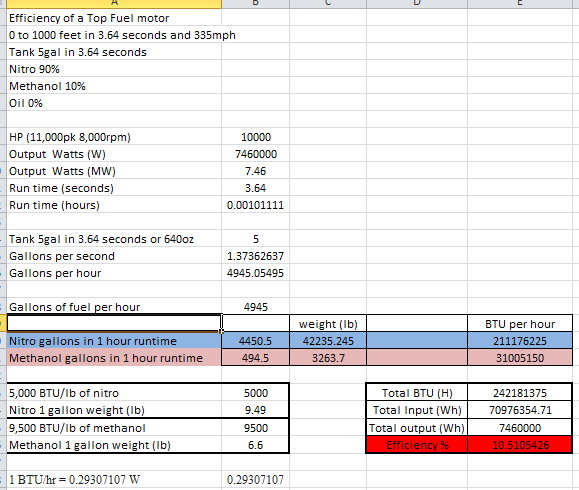 How much fuel does Prince Harry and Megan use to fly their Royal jet to some Green Meeting in Tibet?

And unfortunately enough to get them back.

Yes they should have flown on to parts unknown!!! No more reality TV Crap...No more worthless news... I'm too old to understand how all this stuff works nowadays...What do I know??? However I signed on to this site to enjoy the cox toy model engines of the past. No more no less.. Peace, Mark

It just bugs me that ~5% of the fuel I buy (less oil) is turned into energy I want (prop spinning)?

Those figures are measured at or around their best operating point (typically at a very narrow torque/rpm area), and involve quite a bit of electronics, computers etc. And they are four-stroke engines, which are by nature more efficient than two-strokes. Now, a Cox engine has about 3 moving parts, very simple fuel delivery system, basically a fuel dribble inserted into a pipe, no real atomizing or such. Also the ports in the cylinder are huge, especially the exhaust ports, which causes a considerable fuel loss during every work cycle, straight out of the exhaust. A tuned pipe or a proper carb might improve efficiency but I think the simplicity is part of the beauty of these engines. If you want efficiency, consider LiPo and brushless

I read F1 cars are now getting upwards of 50% (hard to believe).
Its interesting trains use diesel motor to turn generator to then drive electric motors, smart. Otherwise how would you clutch the motor to a heavy azz train to get it rolling?

Question: Are these just motor numbers, or do they include drivetrain?

I do alot of electric, rc on-road cars for 2 decades, plane and and quads (watch my video below). With electric, I don't have to take a shower to wash off the castor oil after a days flying.

"Its interesting trains use diesel motor to turn generator to then drive electric motors, smart. Otherwise how would you clutch the motor to a heavy azz train to get it rolling?"

Actually direct wheel drive steam locomotives are more energy efficient than diesel-electric. They just cost too much in operational procedures, maintenance and down time. But you're correct in observing that it would be impractical/impossible to clutch an IC piston engine to the drive wheels of a locomotive.

As for the showers to get off the castor oil, you need to do a Tom Sawyer fence painting job on the 'ol lady and get her to do all the dirty work. You can start by "educating" her:

@ticomareado wrote:
Actually direct wheel drive steam locomotives are more energy efficient than diesel-electric. They just cost too much in operational procedures, maintenance and down time. But you're correct in observing that it would be impractical/impossible to clutch an IC piston engine to the drive wheels of a locomotive.

A (now deceased) Norfolk-Southern career train engineer told me that about three years ago. He lived and worked first hand during the transition period from steam to electric-diesel.

The F1 engines are pretty high tech. Turbocharged obviously, with a high compression ratio, both of which increase efficiency. Internal moving parts are coated with special stuff to decrease friction and combustion chambers are coated to keep the heat in the cylinder etc. A while ago I learned that their valve springs are replaced with a pneumatic system, have yet to verify that

Already at the 40% mark some diesel cars have a problem with insufficient cabin heat in the wintertime. Better efficiency obviously leads to less waste heat to the cooling water. I would think that with a big enough heater core and proper cabin ventilation there would still be plenty of heat, but the manufacturers rather install an auxiliary heater at an extra cost. My Saab guzzles plenty of gas when the engine is cold but on the other hand it also warms up pretty quickly. I’ve never owned a diesel vehicle of any kind, but have worked with big off-the-highway diesels.

I think that these old glow engines waste a lot of fuel by letting it pass unburned. Despite the tiny fins they seldom overheat, in my experience anyway. Of course the propeller provided adequate cooling in most applications, but still many of them are installed enclosed in cars and they still survive. In cold climates sometimes the fins are trimmed or covered to keep the engine warm enough to run.

@KariFS wrote:I think that these old glow engines waste a lot of fuel by letting it pass unburned.

No doubt. Somewhere on the forum Paul Gibeault made comment that he once raced a custom Schnuerle ported Black Widow in Mouse racing. He said it made good power and placed, but was disqualified because it made the entire race without a refueling pitstop, which is required by the rules.

There was a top driver named Mike Swager driving 1/8th scale nitro car practicing, I could hear that 3.5cc (0.21") motor screaming, i asked the motor builder Ron Perris (now RIP), what rpm and HP that thing makes, 4HP and 60,000 on 80% nitro, 7 port motor (numbers are from a flywheel dyno). That is impressive.

How many gallons of nitro per mile?

I am afraid that I would have to dispute the notion that an electrickery set up is more efficent for several reasons.

The first being weight. A LA 25 stunt engine (inculding propeller) weighs in at 8.9 ounces. An equivalant elctric motor, propeller and ESC wieghs in at 9.1 oumces. 4 oz of fuel will see this run for at least 6 minutes whereas the equivalent lipo battery weighs in at 9.2 ounces.

Charging a battery is also not an wfficient process. Forgetting the inefficiencies in generating electricity in the first place - stepping down 240 AC to the DC volatge and current for charging is at most 80% efficient. The charger needs fans to keep it cool and the battery gets warm in the process.

Now more inefficincies come into play mainly due to heat and the conversion to 3 phase operation for a brushless motor,

Then comes the killer.

Electricity generation is not so effecient in the first place,

While electricity from large hydro ekectric power plants and wind turbines can be rated at 98% efficient - 10% of power is still lost in the distribution network.

While we have wind turbine (no hydro electric) the majority of our electricity comes from coal, gas and nuclear fission - all driving steam generators. This results in perhaps 45% efficiency.

Therefore for 100 watts in, the geneation process only delivers 45 watts. !0% of this is then lost in transmission.

41.5 watts arrives at my power sockets , 33.2 watts goes into the battery which then provides 26,56 watts to the propeller.

@ ian1954
So to be fair, what EFF is it to pump crude oil (and whatever), distil it, turn it into nitromethane/methanol/castor oil and distribute it, all to get 5% power from it?

And for the fun of it, what's the environmental impact of using a cox motor vs LiPo/BLDC motor (same wattage output)? Spewing raw unburned nitro&methonal is simply anti earth, plus the oil spewing everywhere.

What happens to shagged out LiPo batteries in the environment?

How much lighter (if any) can an electric airframe be built since it doesn't have to stand up to as much vibration and fuel soaking?