» The Annual Worldwide Ringmaster Fly-A-Thon
by Kim Today at 7:08 am

» My two latest planes
by batjac Yesterday at 10:29 pm

Question
I am setting up my external plastic fuel tanks to supply some Tee Dees.

In the past I have installed them higher than the motor. This was usually ok but sometimes caused flooding a bit if there is any issue with the needle. Where should the clunker be in relation to the needle valve? Same level as the intake needle elevation below or above?

I guess the same principle applies in hospital IV bottles? Higher elevation is either good or bad.

Your expert comments would be appreciated.

Hello, according to my experience, you must place the fuel tank so that the average (half) is in line with the fuel inlet

In my experience 049 TD-s with screen on the venturi will draw fuel well even if  the top of fuel in the tank is lower than the NV.

09 TD-s "suck" because they do not suck so well and I have DIY-d a screen on the venturi from a bathtub tap filter that improved the fuel supply stability a lot. 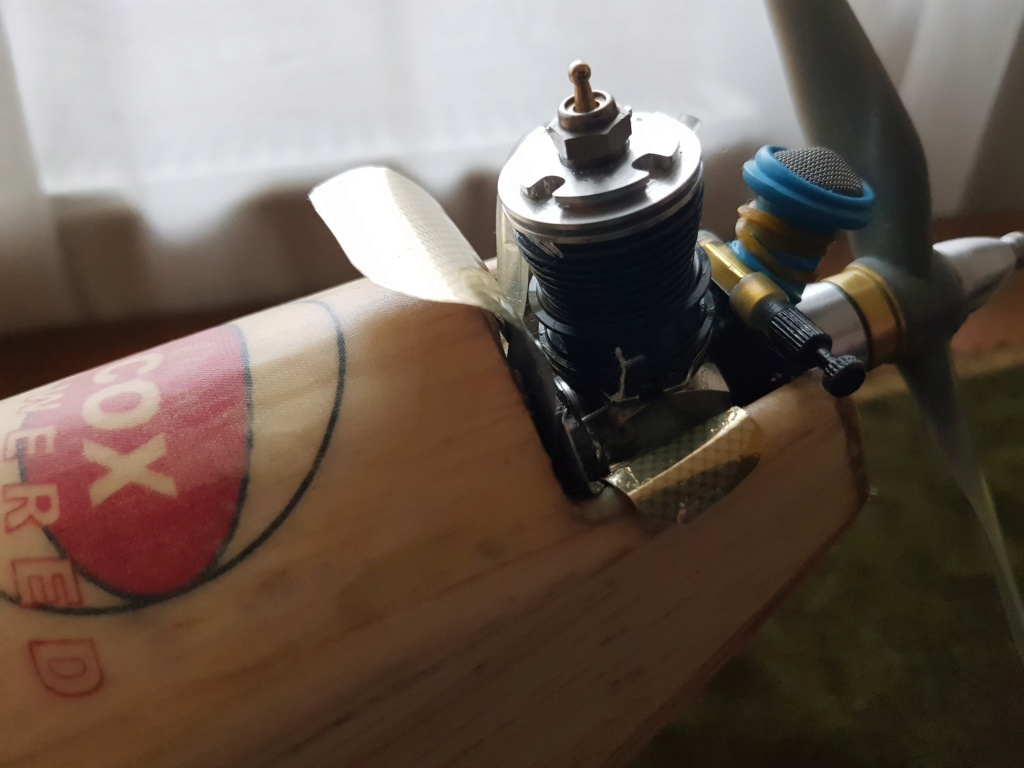 If the tank is too low the engine will not run well when flying inverted, but the tank center slightly below the spraybar is preferable. This way there is also less of a difference (in terms of fuel draw) when you point the nose of the plane up towards the sky. This is the test that any engine needs to pass before you can launch the plane.

The above is for RC, in CL it is instead the distance in the horizontal plane that is important, i.e. inboards or outboards of the spraybar.

Kris, how do you deal with this issue for tanked engines, where you have no influence over the tank's relative position to the engine? I have a few Bees which run good on the ground, but as soon as I start flying the model and point the nose to the sky, they will loose power or cut out, generally with catastrophic results.

You simply have to set the engine richer on the ground, the engine should be able to hold top rpm with the nose pointing up.

The engine may then run a little on the rich side when level but it will pull nicely when needed for a loop for instance. It will be a little like the CL guys use, but not as extreme.

Dirk,
What kind of model is the Bee on? CL, FF, and RC have different tank/pickup requirements.

With Bees, there are a few tank configurations. Depending on those configurations, you may need to check where the pickup tube sits in the tank. Too short or too long may be the issue, causing the end of the tube to be positioned in the wrong place.

So could venting. Some backplates were made with no vents, some had one vent and one nipple, and others have two nipples.

Some tanks were made with the filler tubes in them, combined with the ventless backplates.
Other tanks are completely sealed, except for the vented backplates.

I think the Paul Gilbert Mouse Racer Motor article is in the files section here, and it is easy to find online. ISTR it covers fuel pickup placement.

Surfer_kris wrote:You simply have to set the engine richer on the ground, the engine should be able to hold top rpm with the nose pointing up.

The engine may then run a little on the rich side when level but it will pull nicely when needed for a loop for instance. It will be a little like the CL guys use, but not as extreme.

Ok, let me rephrase the question: what makes some engines run consistently throughout the entire run regardless of position the model is in, while other engines are sensitive to that kind of thing?

Jim, I'm talking about an RC plane, with the fuel tube going to the bottom of the tank.

If your clunk is not heavy enough or the fuel line from the clunk is too stiff or too long then your clunk will not change position by gravity and your engine may run erratically in aerobatics. One reason I always use balloon tanks is to avoid such situations..let alone the dead weight of a clunk you do not want to carry in a 1/2A size RC plane.

Pressure...enough pressure that the needle is restricting over-pressure vs atmospheric/head pressure. So, either muffler or crankcase.

Friend, as I said before, put the tank in line with the crankshaft, that will give you a perfect centering.
Regulate the engine from the needle, as Kris says, a few fatter points level and raise the engine about 15 degrees, you have to fine tune and hold the gear.
Place weight on the end of the tank hose that will act by gravity and copy the movement of the fuel. Here I am doing that test with a Cox .020 ... I hope you find it useful !, greetings!

Dirk,
I've drifted significantly from "tank near engine, inline with engine, and centered up/down on venturi" only to be plagued by drowning engines (high tank), lean runs (low tank), and horrible performance. Especially when the tank was a lot higher.

For the few times the tank was outboard on a CL job, or low on a CL job, then muffler pressure made the run more reliable. See my Black Hawk Models Mosquito thread. The smaller, under wing mounted tanks work while the larger above wing tanks never could. I doubt the model could go inverted, even though I built a wedge into the back end of the small tanks. Inverted would put the tanks above the engines, so I suspect the engines would go rich between gravity feed and pressure. Key note: Twin Norvel Big Mig .074 with venturies.

My Scientific P-40 had the tank a smidge low. It ran fine roundie-roundie without muffler pressure. It flew much better, and consistent when under pressure. It took about 3/4 less turns from closed to run right with pressure. Wing-overs always worked better under pressure. Key note: AP .061 with Jan Haluzko venturi.

I have no RC experience, but studying those planes, or plans have shown the tank pretty much inline and vertically centered on the venturi. On bigger planes pressure is recommended.

I have a sneaking feeling the closer to right the tank is, the more agressively the plane can be flown. And, as you've experienced, once needled.for a particular pitch, unable to transition to a radically different one.


Balogh,
I like that screen retention system. Is it a balloon end rubber-banded to the venturi? How do you stretch it around the screen without the screen tearing it up?

Did the engine drop a lot of performance for the effective trade-off to easier fueling?

Jim says; "
Balogh,
I like that screen retention system. Is it a balloon end rubber-banded to the venturi? How do you stretch it around the screen without the screen tearing it up?

Did the engine drop a lot of performance for the effective trade-off to easier fueling?"

The screen was DIY-d from the filter pilfered from a bathtub tap. It has a plastic rim around it  and the rubber sleeve -cut from a small party balloon - that keeps it on the venturi is not touching any sharp parts of the screen.
The mesh size of the tap filter is rather big so I have backed it up with a 2nd layer of fine mesh filter tucked inside the rim.

No, this 09 engine does not show any negative effect of this screen dropped on it. Just like in lil bro the 049 TD with stock screen in the venturi and SPI, the piston works against a slightly increased crankcase depression caused by the pressure drop of the screen (that also adds some choking to the fuel draw potential), but the SPI allows the entry of the required air into the fuel/air mixture and the engine works without notable rpm loss

dirk gently wrote:
Ok, let me rephrase the question: what makes some engines run consistently throughout the entire run regardless of position the model is in, while other engines are sensitive to that kind of thing?

Jim, I'm talking about an RC plane, with the fuel tube going to the bottom of the tank.

Two things:
- the size of the venturi (and its design)
- the amount of muffler/crankcase pressure to the fuel-tank

And to some extent also the matching of the fuel, prop size and compression ratio.

The most "insensitive" engine I've ever had is the OS .10FP with the stock muffler. I can hold that plane vertical at idle without a single hiccup.