Log in
Search
Latest topics
» ebay "Silver Lining" turned to stone for me.
by Ken Cook Today at 8:19 pm

The professionally packed, beautiful Quickie kit has arrived to my door today. I decided to start the assembly beginning with the covering of the wing which, being made of foam, for me was a relatively novel material to handle.

Tasos was kind enough to send me also 3 samples of the wing foam material which I first covered in polyurethane spray. The foam material was not solved by the spray, but upon drying, the surface became susceptible to denting easily, as the spray took away the flexibility of the foam to some extent.

I tried another sample with Oracover light film at about 40% heat set on my filming iron. Results were quite good, so I decided to cover the wing with Oralight transparent white film. The front part of the wing made of carbon shield did not allow a bubble-free coverage, and remained a bit spotty, but it does not disturb me and I may decide later to cover this part in a non-transparent, additional Oracover color scheme. I will cover the fuselage and tail section in the same transparent white Oralight, because it allows the nice balsa wood grains to remain visible.

The foam body of the wing itself allowed a smooth coverage, and ended up a shiny surface. Again, the temperature setting of the iron should not exceed IMHO about 40% which is warm enough to anchor the film on the balsa side and rear parts of the wing as well as to the carbon traveling edge, and shrink it tight, but is not too hot to damage the foam. 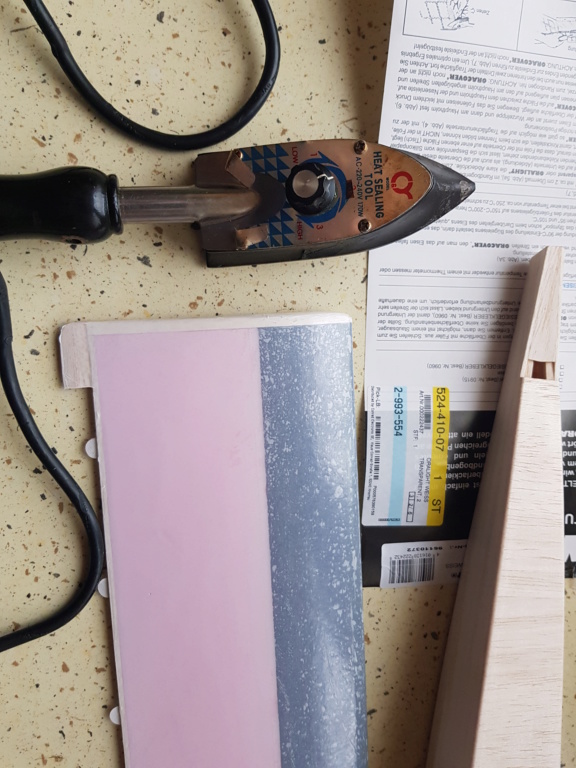 I will post further milestones of the assembly later.

Thank you for the kind words and sharing your Quickie 100…you are really a fast man!

Thanks Tasos...I want it in the air with my 46 y.o. red postage stamp 049 reedy a.s.a.p! Even when starting from scratch I usually complete my planes in a few days, working on them till the small hours in the morning.

Thanks for the review.

Thanks, Levent, I continued the covering in Oralight, but the fuselage was sprayed in 2 layers of polyurethane varnish beforehand...the 049 is proudly sitting in the nose, waiting for its airtime to come 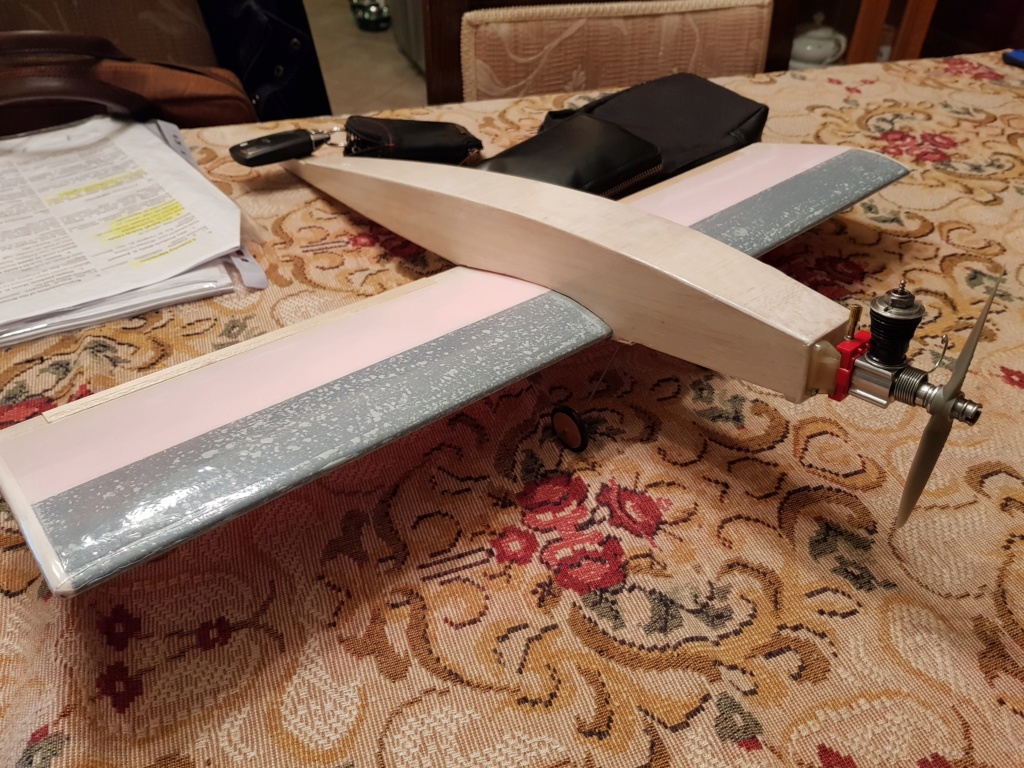 I have completed the assembly of the Quickie. 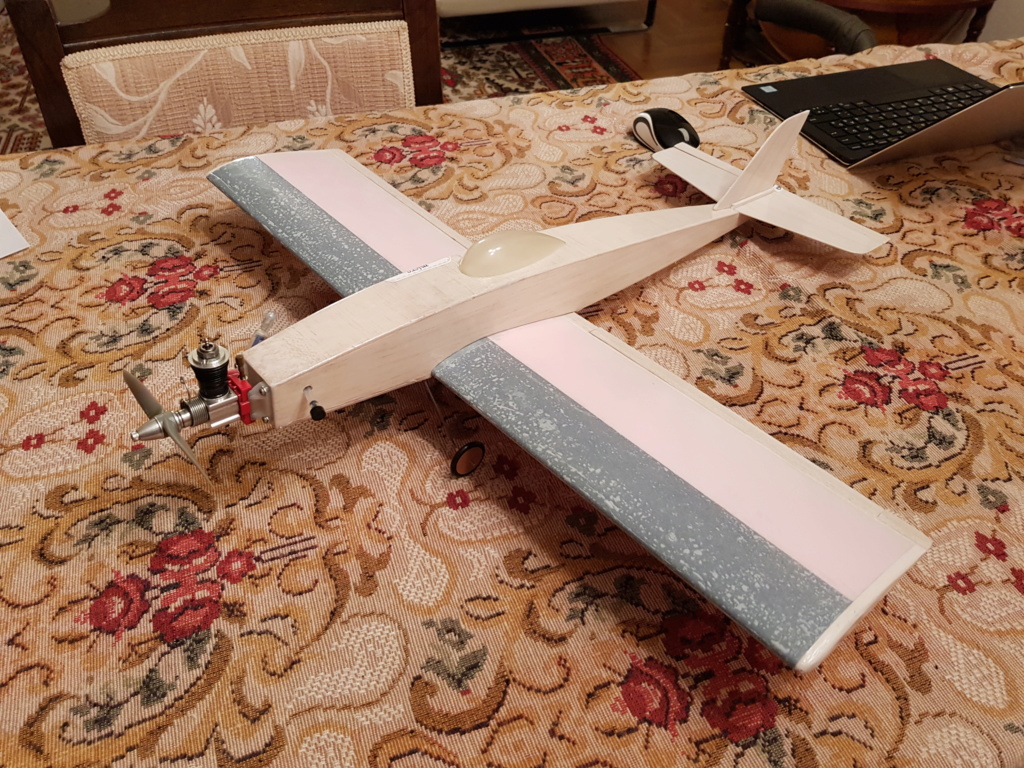 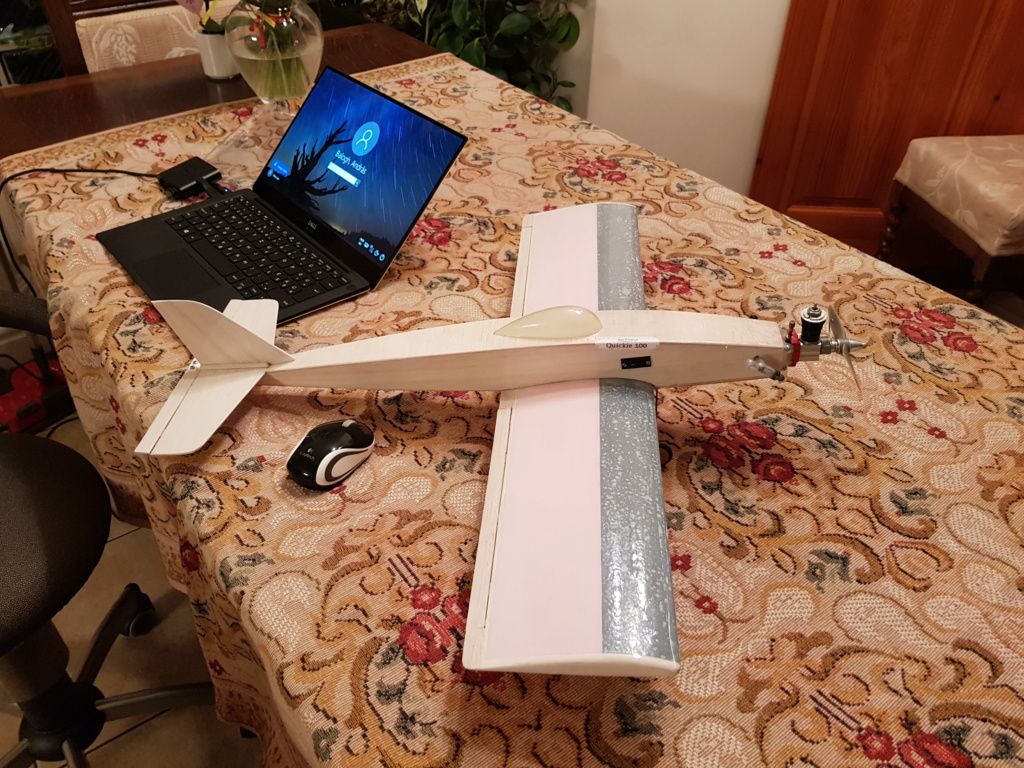 All-up dry weight is 266 grams. The guts include a 400mAh NiMH battery, a Futaba RX  and 2 servos, plus space for a third one that will activate the throttle. 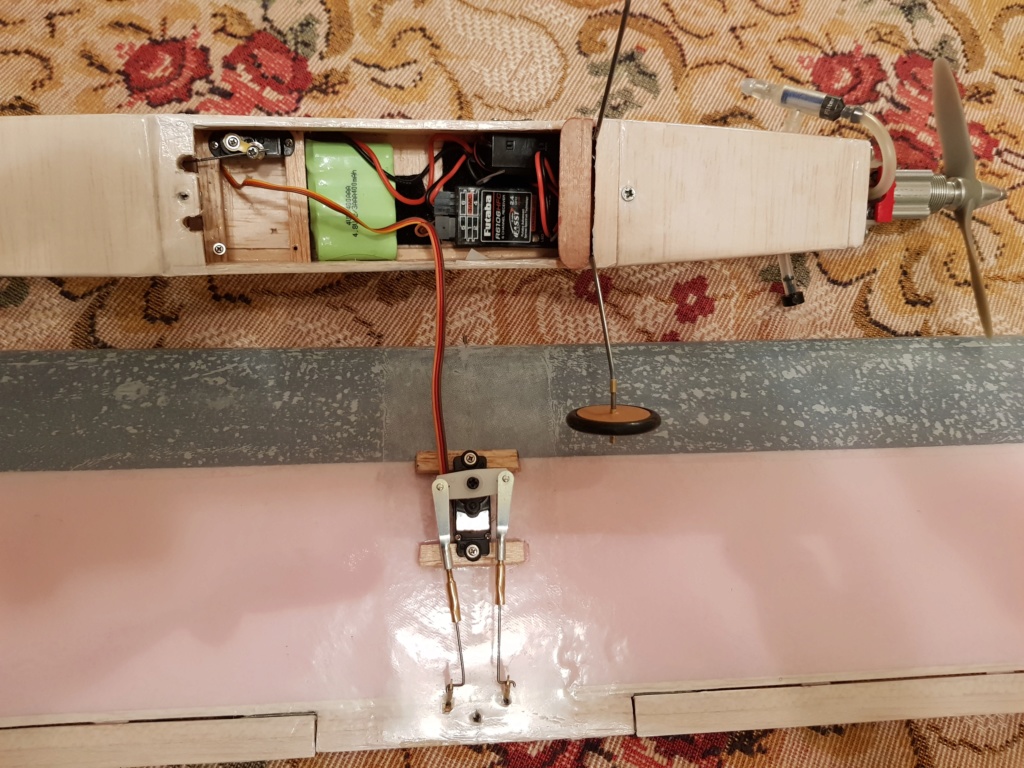 I use a balloon tank that holds around 40ccm fuel - enough for a 8...10 minutes flight -  and filter. My default power plant is my favorit red postage stamp reedie from 1974. 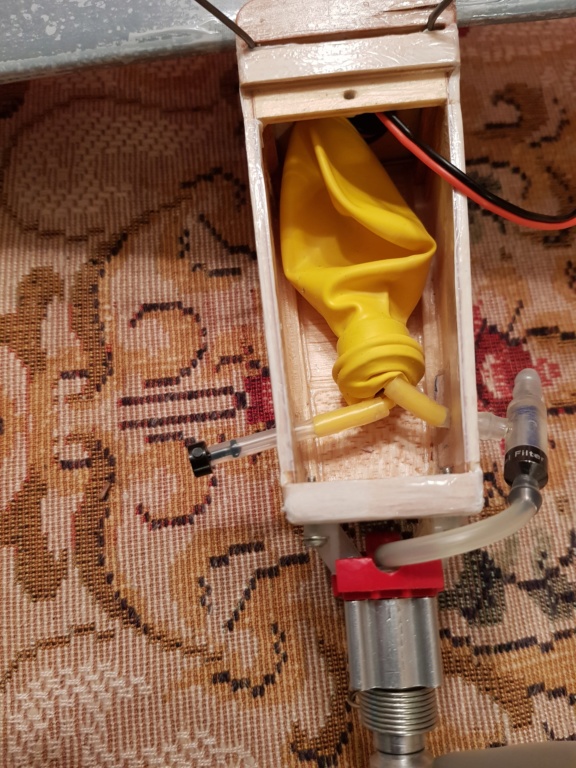 The assembly was quick, the most difficult part was to find out where to put the elevator servo, because I did not dig the aileron servo deep in the wing center, so the push rods run relatively high above the wing and take up precious space. Anyway, I was begging to find place for the elevator servo only at the beginning, and ended up with a spare position for the throttle servo as well.

I will maiden it tomorrow, weather permitting.

Best wishes on the maiden flight, I hope you enjoy it!
Vid that puppy so we can see the plane flying not the
engine running lol. Bring it in closer so we can see it
tooooooo.

Thank you Brad. With the tank in the nose, and given the low wing design, all hardware like battery and servos had to be fixed on the fuselage ceiling, and the CG is thus located in a rather high point. I hope this will not cause instability.

...it is a helluva lil basterd and lives up to its name...I maidened it today in strong winds and was relieved to see it fly so straight that no trimming was needed, despite it is nose heavy when fueled, and having its CG well above the wind thanks to the gear attached to the ceiling of the fuselage.

Will charge my camera and try to do a video tomorrow, although weather forecasts are not quite reassuring for tomorrow..anyways, as long as rain does not fall, no matter what winds, I can fly the Quickie with total confidence,  thanks to its superb aerodynamic design. The red backplate 049 reedy with turbo head and the 4.5 x 3.5 APC prop unloaded well over 20k, (but I will audiotach the video to make sure) and pulls the Quickie very strong even in headwinds...

Congratulations I am happy you had no trouble with the trim flight! Yes vid vid..
The airfoil helps it track in the wind, power to weight is good. I bet it is rather fast.

Andras, you did a fine job on finishing and preparing the model… first trim flight is successful so a well-deserved thumbs up!
As for actual flight performance I will just repeat the old but always true adage: accurately constructed/rigged airframes fly “straight” right of the building board.

PS1: Finished AUW could be even less if a smaller battery was used and placed in the forward hatch area… elevator servo can alternatively be positioned on its side rather than vertical to save space.

PS2: I want to publically thank but also apologize to Andras for his patience on receiving the manual for the model… I had to send it to him via email at last days of his model preparation as it took me quite some time to properly write its full ten pages.

Hi Andras, what did you use as fuel stopper? 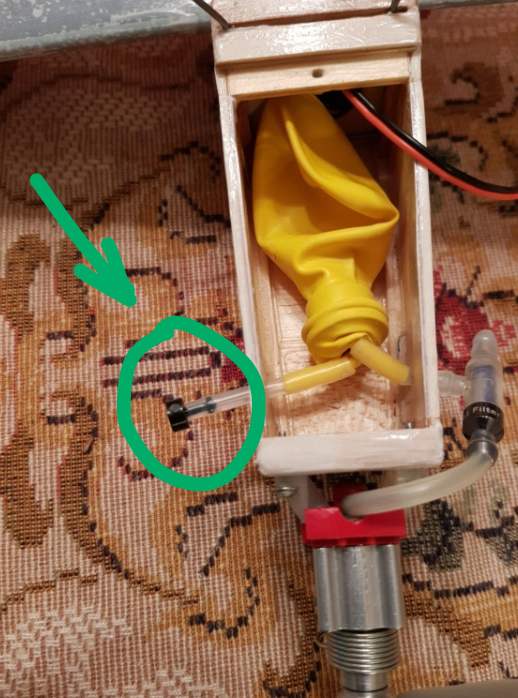 Hi Levent. This plug came together as accessory to the Proportional Exhaust Throttle or PET system, a unique exhaust throttle patented by the late and great Richard Freiheit when I bought the PET from him for my TeeDee 010 engines. I am not sure where he got it or repurposed it from.

Thanks for info. A very complete set, neat. 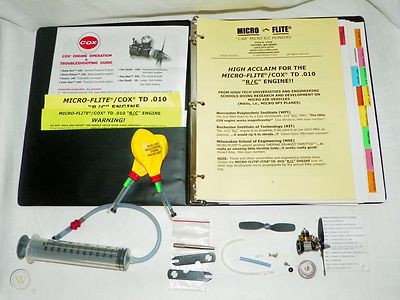 Exactly the stuff I got from Richard..you will find the stoppers on the tank filler lines...where did you get yours, or this is just a link on worthpoint?

It is from worthpoint web site:

Here is the patent of this throttle:

Andras, you did a fine job on finishing and preparing the model… first trim flight is successful so a well-deserved thumbs up!
As for actual flight performance I will just repeat the old but always true adage: accurately constructed/rigged airframes fly “straight” right of the building board.

PS1: Finished AUW could be even less if a smaller battery was used and placed in the forward hatch area… elevator servo can alternatively be positioned on its side rather than vertical to save space.

PS2: I want to publically thank but also apologize to Andras for his patience on receiving the manual for the model… I had to send it to him via email at last days of his model preparation as it took me quite some time to properly write its full ten pages.

Thanks Tasos. I did not want to compromise on battery capacity. Once in the field I like to stay long and fly several 8..10 minutes runs and unfortunately saw before  one of my planes fly away and lost eternally when the RX battery ran short on juice. For fears of a nose heavy balance I had to move the battery towards the aft because putting it into the nose would allow less fuel in the tank due to the added nose weight and imbalance.

Yes I was contemplating the elevator servo to lay rather than standing erect but then the servo mounting bolts would be difficult to access.

I spent almost a day in figuring out how best to fill the bird's belly but finally managed to even allocate room for an extra throttle servo in the same servo frame as the elevator servo, but on the other side. This is yet to be installed.

Please do not apologise for the manual, you did an excellent job, and assembling the plane following my humble experience and instincts just added fun to the build. I wish many other users should enjoy the Quickie 100.

1/2A Nut wrote:Congratulations I am happy you had no trouble with the trim flight! Yes vid vid..
The airfoil helps it track in the wind, power to weight is good. I bet it is rather fast.

Thanks Brad. I will try to video near passes but this bird us pretty fast and the fields I fly has trees and bush on its fringes..I wish I had a better headcam than this Sony...my next investment in the hobby

I got bhine on this thread LOL Glad to hear you got a Quickie 100 and the flight went well !!

Thanks Eric, managed to shot a vid today and will post it soon.

I have enjoyed this thread, enough to send Tasos some $$$.

Well, I'm happy to report that, even in the midst of a worldwide pandemic, my Quickie 100 has made the trip from Greece to Texas, USA unscathed! That was quite a journey for a model airplane. The safe arrival was mostly possible because Tasos spent as much attention to detail on the packaging as on the model itself. His attention to detail on his builds is in a much higher league than my skills allow! 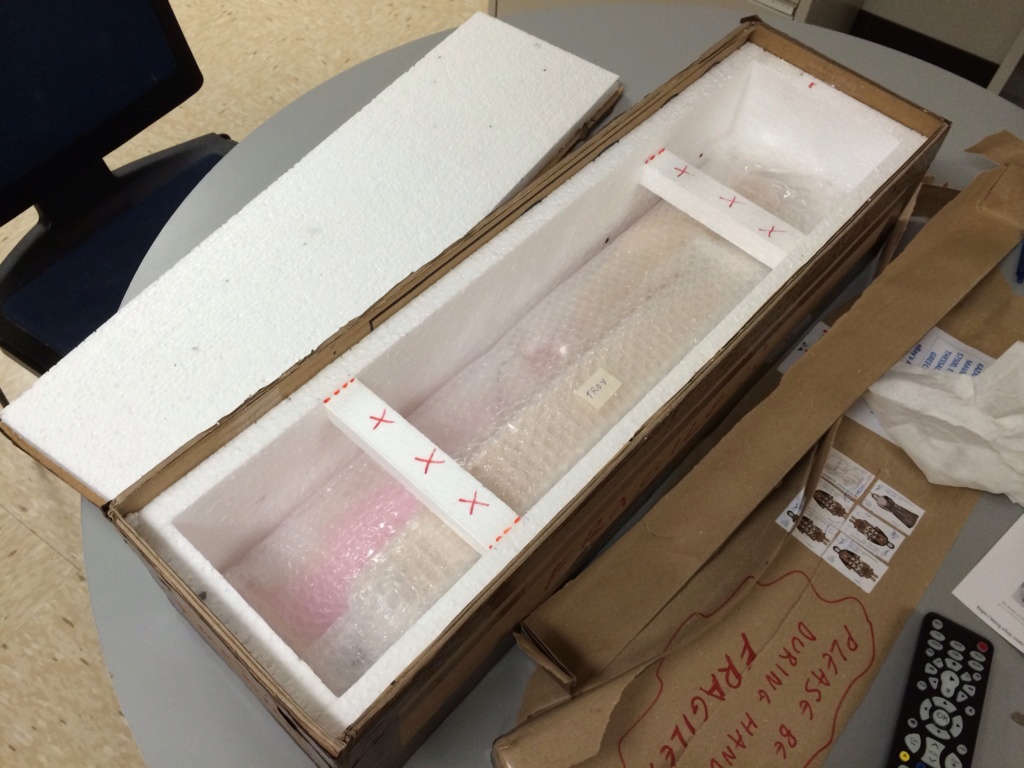 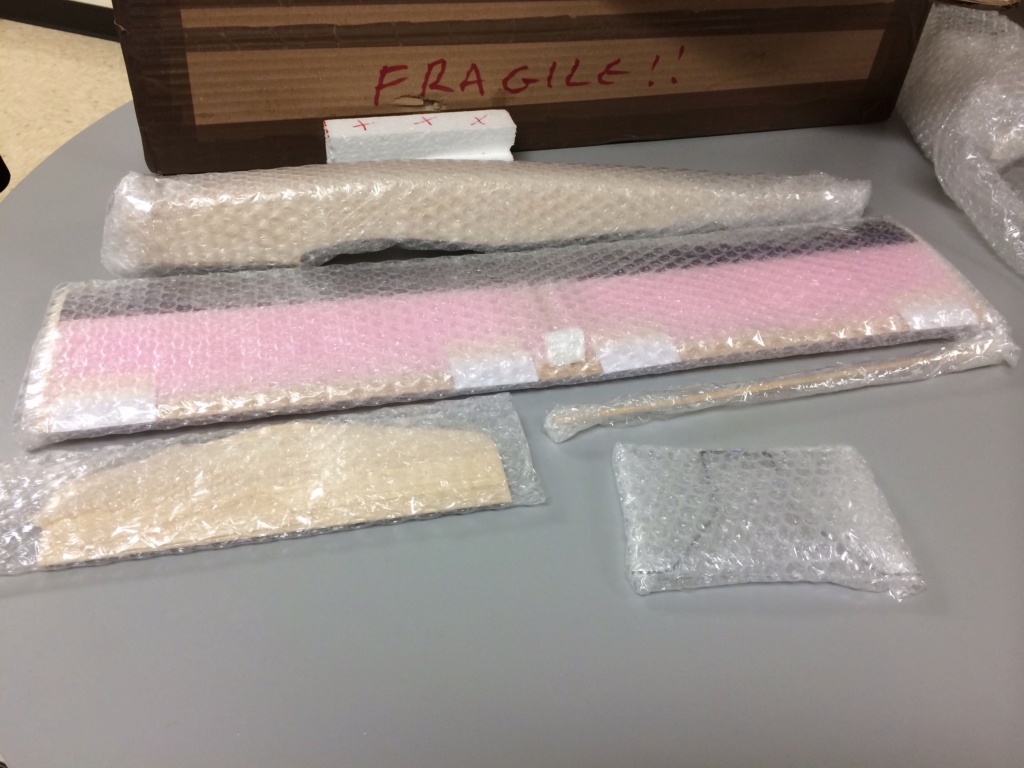 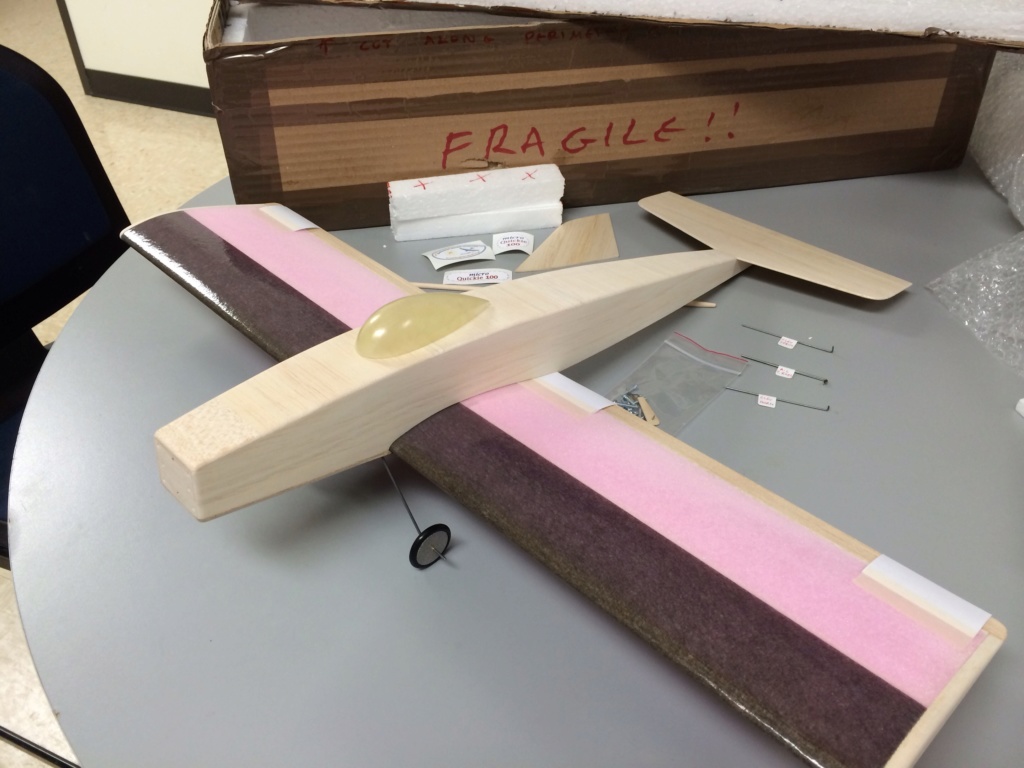 Way to go Troy..looking forward to your posts on completing the plane..what engine will you try it first with?
Andras