Latest project I'm working on is a 1959 Berkeley Impulse single channel pylon racer build. It has a 46" wingspan with 295 square inches of wing area. I'm tearing up a vintage kit, but it was an E-Bay buy for a song about 4 years ago. (Nowadays vintage suff is going for ridiculous prices on E-Bay.) Box was marred with water stains, kit looked like it had been stored in an attic for some time. Besides, if I attempted to sell it, would get about what it would cost to have someone laser cut parts.

It will be powered by a Thunder Tiger GP-07 modern Schneurle engine. I had thought about the Cox .074 Queen Bee, but that engine is just too long to fit in the engine compartment, would stich out at least 1.5" beyond the cheek cowls.

Instead of single channel it will be full house with a servo on each strip aileron, zero decalage on the wing, half the dihedral for better aileron action, servos mounted ala 3D style closest to the operating surfaces with shorter linkages. My build will violate vintage appearance points being brought up to date, but what the hay, they would have done the same in 1959 as well.

True to Berkeley style (or so I am told), the wood came with the traditional die crunching, inferior wood selection, and less than accurate die cutting, which makes for an excellent build. (Completing a Berkeley kit was an accomplishment, a rite in its own crude manner. It made many a man out of a modeler, LOL.) 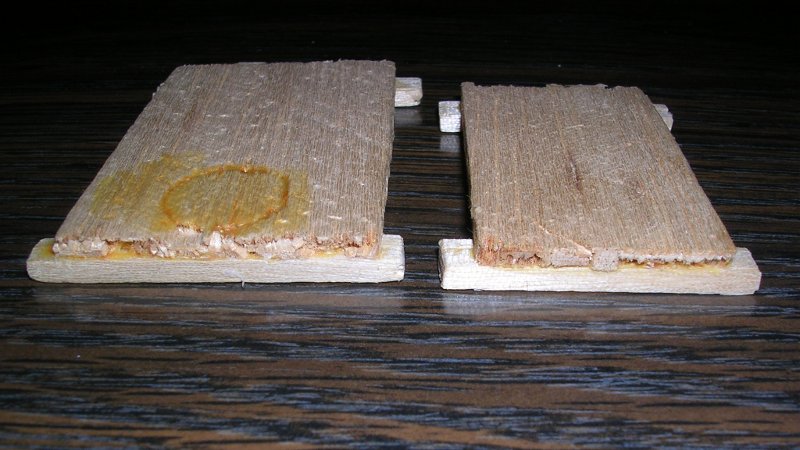 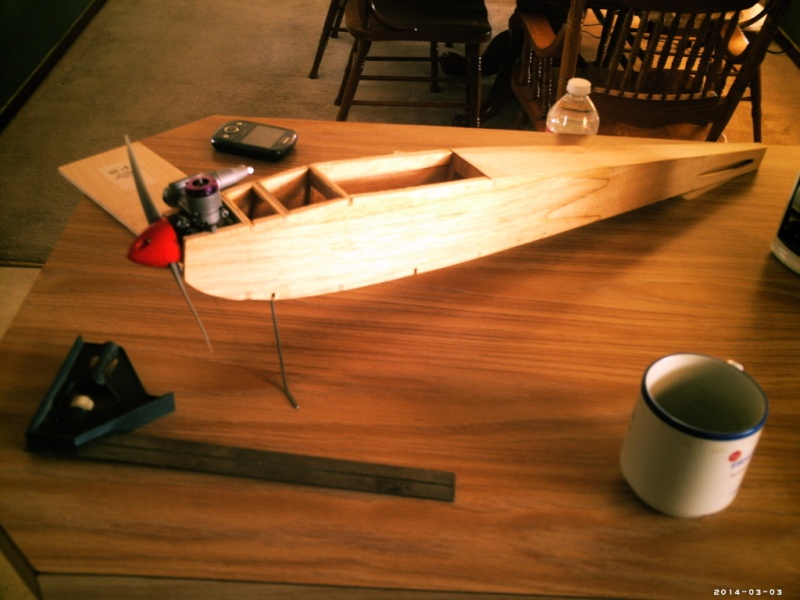 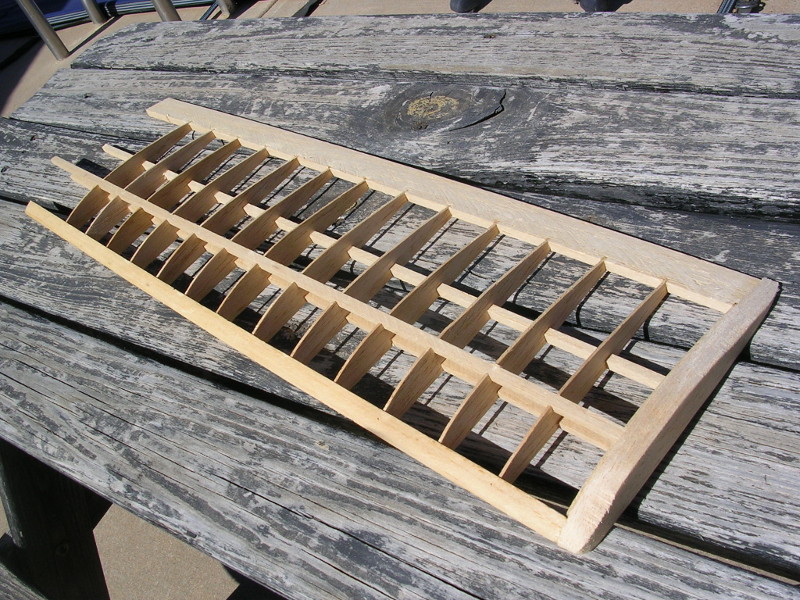 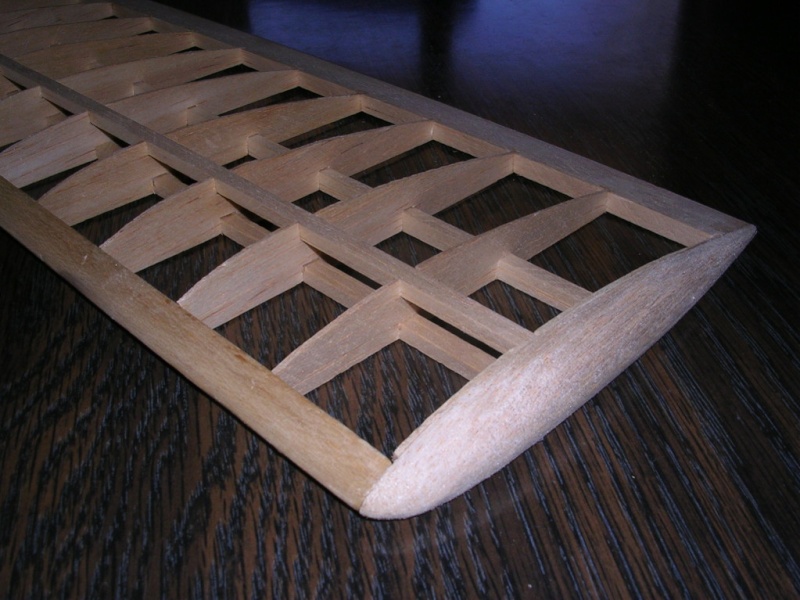 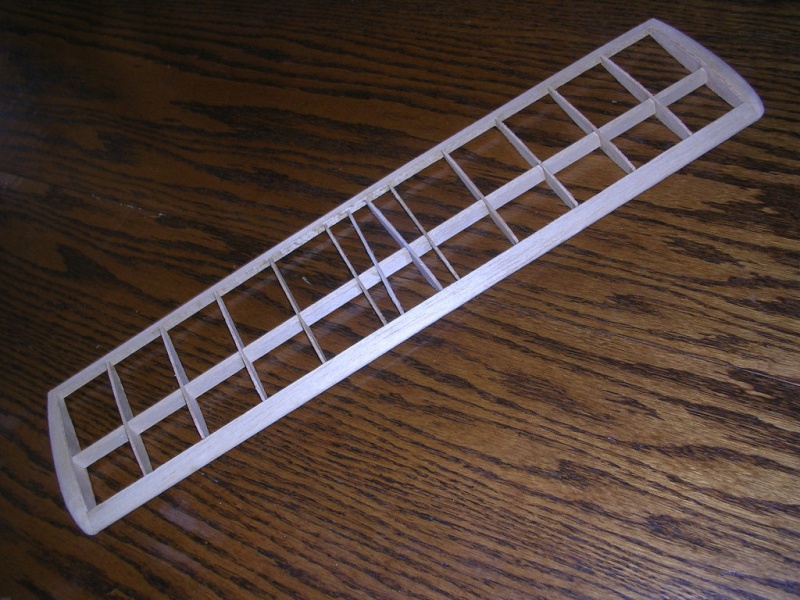 So far, I'm having a blast with it! 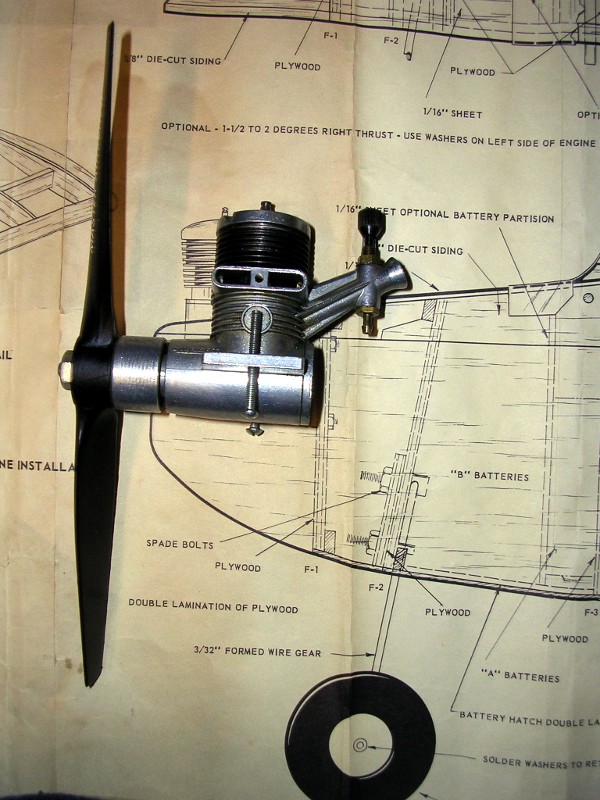 Fox .09 Rocket engine (downloaded this picture from somewhere sometime back, if yours please let me know and I'll credit you): 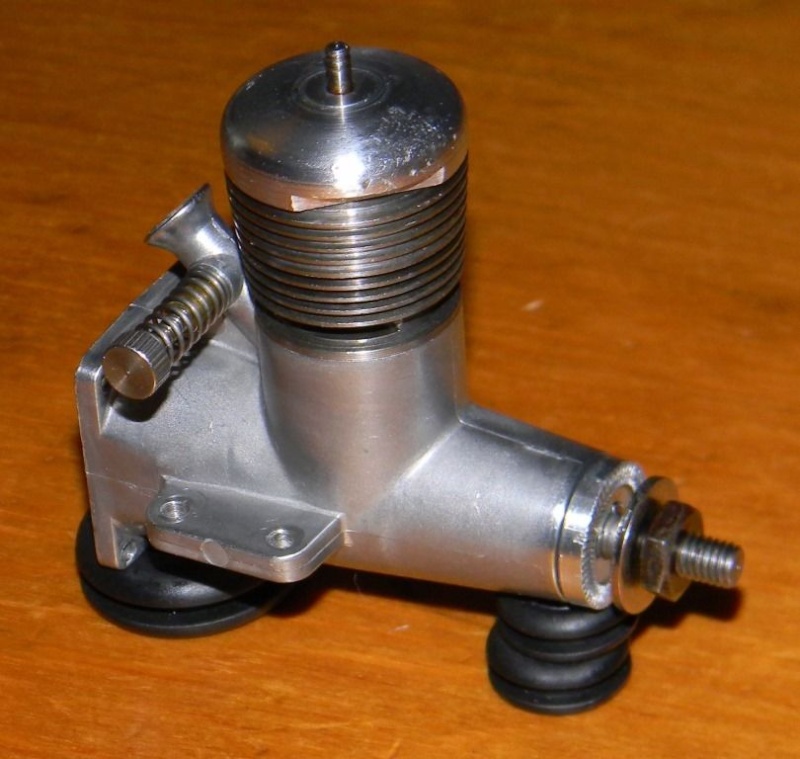 Fox .09 Rocket had an integral tank at the back of the engine. The Berkeley plan shows no other engine. Although one is free to install whatever engine would work, which for this size of plane could be a .049 to a .10, nothing else is shown on the plans.

I will add a 3/16" thick ply spacer sanded to give about 2 degrees right thrust and radial mount the GP-07 to the engine bulkhead.

Got the right wing built and stabilizer planked. 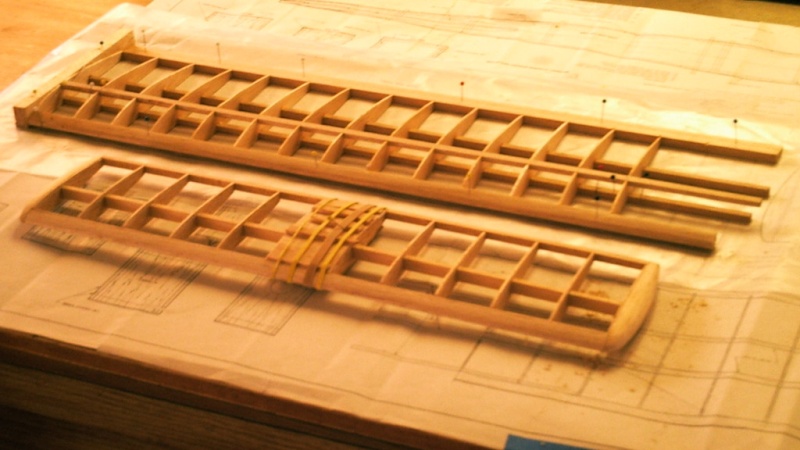 To keep this lightweight due to the lower power of the GP-07, am going to use Litespan / Coverite Coverlite heat shrink and Balsarite to stick it on.

Looking good George. I think the .07 will easily outpower the Fox .09 and the Gilbert.

Not to change the subject, but how is the S-1 coming along? I hope it will be done by July.

@Cribbs74 wrote:Looking good George. I think the .07 will easily outpower the Fox .09 and the Gilbert.

Not to change the subject, but how is the S-1 coming along? I hope it will be done by July. Ron

S-1 is completed except for fuel proof clear coating. I'm waiting for a break in the weather (warmer with not wind) so I can spray it. I do want to fly it before March is out.

I like the idea of the Enya. Power is really good, but it's a bit heavy. Although with that big tail it may work quite well.

Here is a engine test of the Enya .09 III

I've seen that test report, Ron. I am totally impressed on how well the Enya .09 flies, it's power is just as good as the .09 and .10 sport Schneurles. It likes the lower mass wood props. With a 7x6 Top Flite wood, it really moves out, adds spirit to any mild .049 plane. Torque is in the lower RPM band, around 12,000, so there is no advantage to running smaller props than 7x4. Its cousin, the .09-IV is a tad more powerful, but the III holds it's own.

Another plane I've got with the same proportions is the 1962 Airco Aero Star.

It is an odd swept high wing cain model with same wing area and tail moment. I may build that one as rudder and engine control. It would be a candidate for the slightly hotter Enya .15-III TV that I have.

I was impressed with the amount of nitro it can handle. Parts are probably scarce so I would go over 15-20%

I've been using 22% nitro fuel with it, and it runs just fine with a legacy Tatone .09-.19 Peace Pipe muffler. (Those Peace Pipes do fine as long as one stays with the smallest or less than that stated sizes. Am using the .29-.40 Peace Pipe on an Enya .19-VI TV.) I think one could get by on even 5% nitro with these Enyas. I like them because they are powerful, will spin larger or greater pitched props easily.

I found that the Enya .15-III TV with throttle wired open with 8x6 prop put out as much thrust as my OS Max .15FP-S with 8x4 prop. They have a lot of torque in the lower than Schneurle RPM band.

Regarding parts, Enya is still in business. Not sure but I think the current .09-IV version sleeve and piston might work in the III. The muffler works. The .09-III is odd in that the exhaust is on the left side of the engine. It's one reason why I installed one upside down in my OK Models Pilot Cessna 177 semi-scale.

A couple days ago I received a gift from Dane Martin, CL flier and friend, a 1966 OS Max 10R/C cross scavenge engine with 702 muffler. This muffler is as rare as hen's teeth. 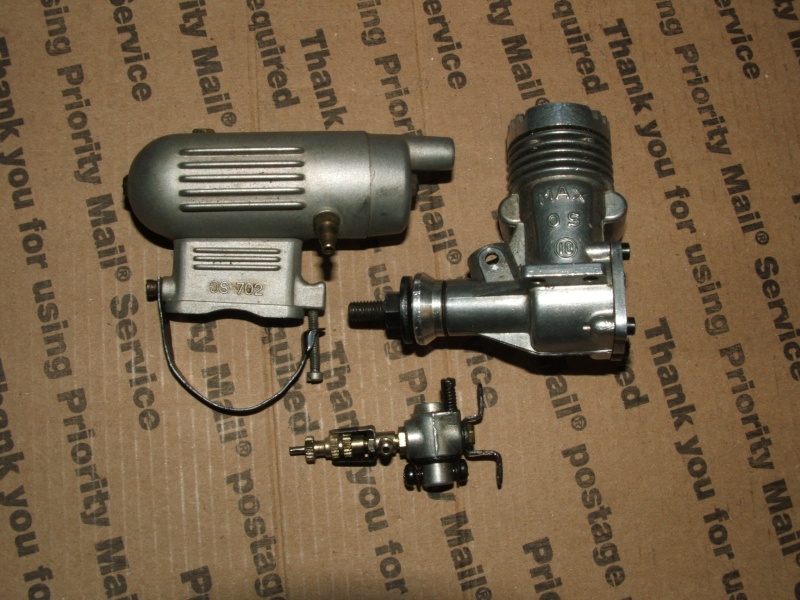 I was lacking a suitable powerplant for this 1959 Berkeley Impulse single channel pylon racer / trainer build. Fuselage sides engine cheek cowls were too closely spaced to fit the A.C. Gilbert 11 Thunderhead side port, which would be in the same class as the 1950's Fox 09 Rocket side port shown on the plans, ditto for using an Enya 09-III TV. Didn't have a needle set screw for the Thunder Tiger GP-07 to extend it beyond the cheek cowl. Cox 074 Queen Bee stuck out almost 2 inches beyond due to engine's extra length. My other OS Max 10R/C's have only the variable exhaust restrictor baffle ganged to the carb, which cheek cowl interfered with. This gift engine fits perfectly. On a 7x5 wood prop ought to haul this 46 inch span model with reasonable authority. I am making a few other mods to it to make it fly better on full house. 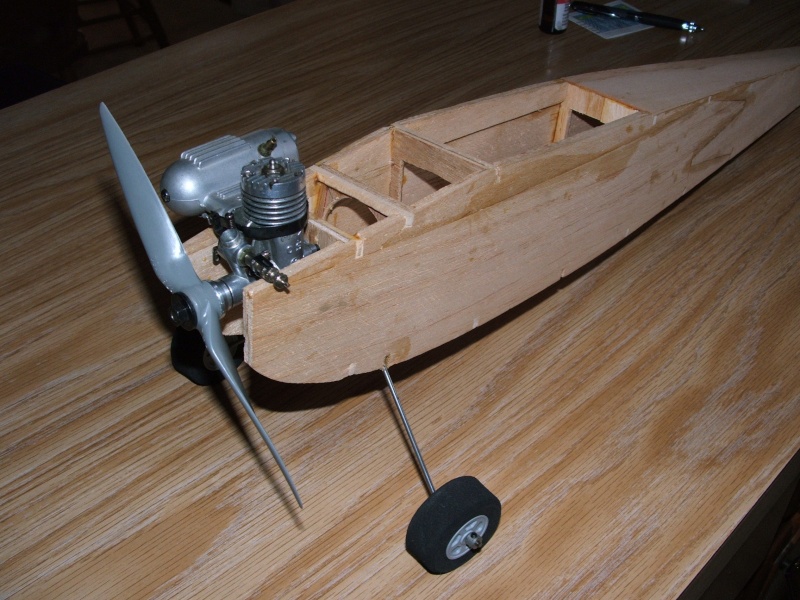 This engine looks like it was made for it. With a very ample muffler chamber volume, should have little loss in power. IMO so well engineered are OS mufflers that Peter Chinn mentioned that the earlier muffler, which is slightly smaller in volume basically caused a negligible decrease in power.
I'm stoked!

Originally I was going to use the A.C. Gilbert .11 Thunderhead since it is in the same power class as the McCoy .098 "9" and the Fox .09 Rocket shown on the Impulse plans. However, the die cut parts came in narrower than plan when I assembled it, neither the .11 nor Enya .09-III TV would fit the narrow space between cheek cowls. The OS Max .10R/C is a tight squeeze, but doesn't allow enough room for engine thrust line adjustments.

Then I decided on using my Cox .074 Queen Bee R/C. I bought NOS Grish Tornado (Plastikote?) wood 7x2 props for this engine for use on this aircraft. 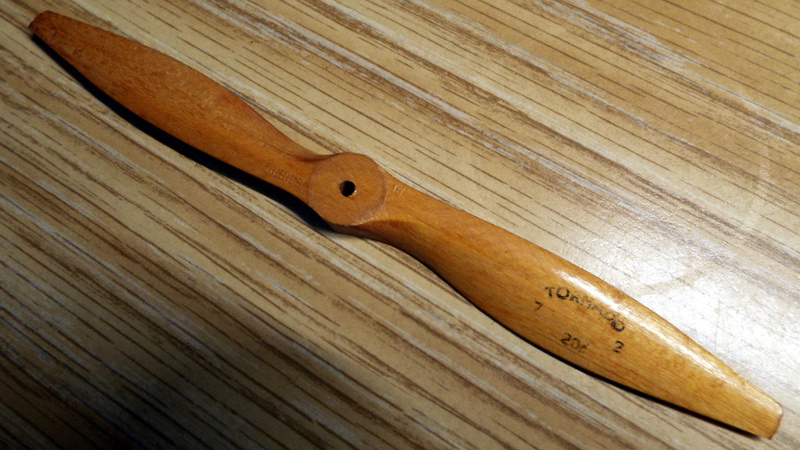 The Impulse is aerodynamically relatively draggy and Cox .074 with optimal 6x3 prop did have much of disk past the fuselage. (Remember, this plane is fairly large with a 46" (1170mm) wingspan. Imagine that they would call this plane suitable for single channel pylon racing.

) Plane needs all the power it can get from the .074 and as such wouldn't be worth attempting with a 7x3 or 7x4 prop and loss of power.

I thought the 7x2 might be the right ticket.

However, I landed a Medallion .09 R/C at a very reasonable price on E-Bay and it is narrower, fits with room to spare. 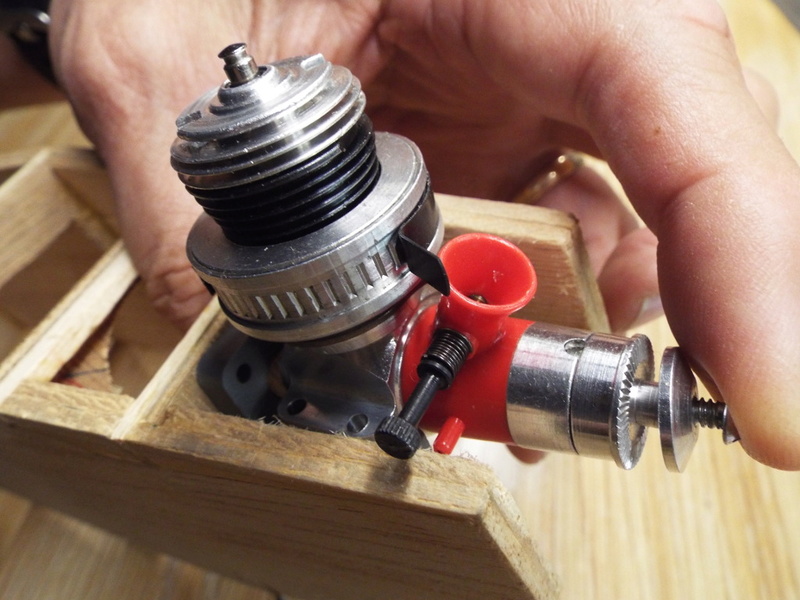 Caveat was the short mixture needle that did not clear the cheek cowl and I didn't want to modify the needle. 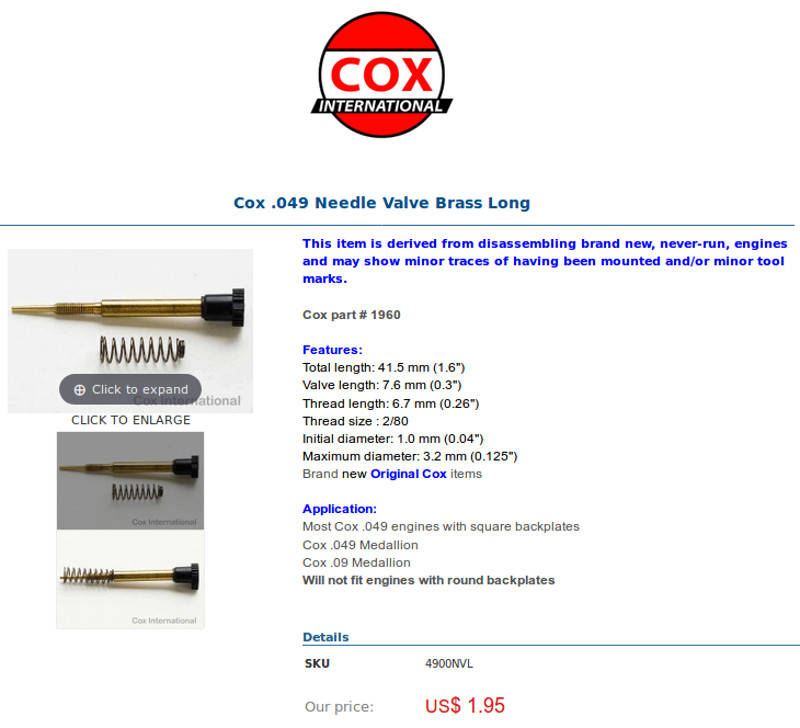 Now that my engine problem is resolved, I can resume completing my Impulse.

Looking very nice George, I like the looks of that airplane.

Heck Yea looking forward to hearing about some flight time , its amazing how time flies when you're having fun !