There WAS a Cox Conquest .40 produced in a few prototypes-and pre production models-but it never went into production....anecdotally only a few examples-as few as 10 or 20 were made-basically to test the tooling arrangements prior to going into full scale production-which never went ahead. it looked just like the 2.5cc one. A few chosen fliers-mainly US FFers were given one for evaluation purposes....Doug Galbreath I know certainly had one-there's extant photos of him with a Conquest .40 FF model.

I doubt Mecoa has any parts for them...as the project would date back to the late 70s-well before Mecoa got the rights to the Conquest -and an era when Cox was still an independent company.

is 1968 rear rotary valve .40 exist later sort of conquest .32 front rotary valve cox prototypes is som of them exist ??? conquest .15 ff wit just round manifold for tuned pipe is very nice engine want one for my self experiment

Not sure what you are trying to say. Cox did not make anything over a .15 that was actually for sale to the public. You might find a rear rotor OPS, Picco or Rossi still. SH makes a .32 still. Mike Goes Flying carries them but may not ship to Canada. He did not before when he carried the ASP line. Conquests are a bit pricey unless you are just lucky to find a deal. For experimenting, I like the AP .15. They were only $40 new when they sere still being made, and are rear exhaust ABC BB. They are really only a .135 cu. in. but can be made to run fairly well if the revs are kept under 20,000 rpm. Don't really know what type of experiments you want to do, but they are not 'precious' They are based on the AP .09 with a big piston.

No-there were some .35 and .40 size projects done by Cox in the late 60s that never went into production...these were the 'Concept' engines not 'conquest ' and were both front and rear induction. The Conquest 40 was a much later engine-and again was not put into production-though a small number of pre production engines were passed out to a few selected modellers for evaluatiothat

From the very limited amount of published information it is not even certain that Cox made any COMPLETE examples of the Concept series....as distinct from prototype and/or engineering mockups....

No-there were some .35 and .40 size projects done by Cox in the late 60s that never went into production...these were the 'Concept' engines not 'conquest ' and were both front and rear induction. The Conquest 40 was a much later engine-and again was not put into production-though a small number of pre production engines were passed out to a few selected modellers for evaluatiothat

From the very limited amount of published information it is not even certain that Cox made any COMPLETE examples of the Concept series....as distinct from prototype and/or engineering mockups....

Not necessarily-'Concept' -with a capital 'C' was the name of the project-and it extended to .35 and .40 engines of front and rear induction...as I recall. The accepted date is 1969-and it is not clear if any COMPLETE prototypes were produced,...page 57 of the American Model Engine encyclopaedia shows a copuple of photos of the front and rear induction models-with the note "these were never released for general distribution-but many castings were 'let out' and engines subsequently finished by collectors. this leads me to suspect that perhaps Cox did not make any complete engines themselves-but obviously produced castings for the block, backplate and front housings...whether they produced any internal parts is apparently unknown. i note that the two in the AMEE photos have K&B prop drivers fitted....suggesting perhaps that the owners fitted K&B innards to Cox crankcase castings.

There is an apocryphal story that there was a gentleman's agreement reached between Leroy Cox and Duke Fox in the late 60s that Fox would not produce small motors (below 2.5cc) and compete with Cox, and Cox would not produce large motors and compete with Fox.  This may have had some background in several areas-the US 1/2A market had got ridiculously crowded in the early mid 60s, with both Fox and K&B entering the low cost end-in a market already saturated by Cox, OK Cub, Atwood and WenMac-not to mention less successful imports like OS and Enya (in the 1/2A engine arena)-plus Cox got badly burned when the slot car fad burned out quite quickly....so it is reasonable to expect that an agreement that helped maintain each company's market sector might well have occurred...in the light of this-and perhaps with other unresolved technical development problems with the Concept-II project, perhaps Cox were quite happy to abandon the project and cut their losses.

The Conquest 40 may simply have come along at a bad time-its demise may simply have been due to K&B taking over the larger engine production from Cox-and deciding that they already had a range of well performing .40s of their own-and didn't need yet another unrelated .40 model-with all its tooling requirements and parts inventory production. It is accepted that a small number of Conquest 40s were made by Cox and sent out to well known modellers-mainly C/L and F/F modellers for evaluation....and there the story largely ends. K&B were not adverse to pruning their range if sales or economic conditions dictated-they dropped their own series 72 rear drum valve K&B15 in favour of the Conquest 15 when they took over production from Cox. Those few Conquest 40s that exist probably reside in collections these days.  I have never seen any performance figures for the Conquest 40 published...

PS checking my extensive archives-in the 1969 Aeromodeller, in the regular monthly 'Engine News' column-there is a single photo of the Concept 35 in the May issue, one of the Concept 40 in the June issue, and in the October EN column there is mention that the Concept-II engines were shortly to be going into production and would be available from retailers 'towards the end of the year'-and there would be four versions: shaft valve twin BB R/C engines in both .35 and .40 cu in displacement, a .40 disc valve twin BB R/C engine (presumably intended for pylon racing) and a .35 shaft valve plain bearing 'sport engine (presumably intended/aimed towards C/L stunt...)

It is a matter of historical record that this didn't happen-so something fairly major must have arisen to stop Cox Mfg proceeding with their stated plans to go into production...the article goes on to mention a few more design details which I can add later if anyone is interested. I do not know if the UK R/C magazines of the time-which would effectively be RCM&E only-there weren't any others then covering R/C aircraft-gave any coverage to the Concept-II engine project.

You can find pictures and information on the cox.35 and .40 at the Martin Hepperle site. Here is a link to the .35 pictures. Engines had integral head with the cylinder and split crankcases. The crankshaft and prop driver looks a lot like the ones on the K&B 6.5cc rear exhaust.
Juan

@F4D Phantom II wrote:You can find pictures and information on the cox.35 and .40 at the Martin Hepperle site. Here is a link to the .35 pictures. Engines had integral head with the cylinder and split crankcases. The crankshaft and prop driver looks a lot like the ones on the K&B 6.5cc rear exhaust.
Juan

great post-that link has more info on the concept engines than I've ever seen before.....

Looks like a nice light motor. Too bad it never happened. The cylinder casting would be a nice thing for someone to bring back into production. Wonder what happened to the mold. Hope Mecoa doesn't hide it. I like the fact that there are no head bolts. Absolutely no leaks. The high performance Russian motors try to use the one piece screw in insert because of that, but there is still a couple threads. No bolts, they are always a loss.

I used to run Ron Young Conquests in F2D back in the day.  On a trip to Calif for the company I visited his home.  He had several of the .35 / .40 prototypes.  They were very nice and light as I recall.  The castings appeared to be die cast so someone made tooling to get that far.  I still have 2 of his conquest motors, the last one that I ran was used on a old time stunt plane by wild bill called the Scared Kitten.  I used a 1/4 in venture and a 8-3 rev up prop and the short stub muffler with a silicone tubing to get the exhaust out of the nose.  It was on a pacifier pressure and turned 25K on 10% fuel. I had detuned the motor from it's F2D life.  That was when they were starting to discuss the high rpm low speed stunt trend so I thought I would show them what would happen when taken to an extreme.  I had a paper with the old time pattern written on it to follow and the plane only flew once, the contest was also the first flight.  I did get an ovation after the flight.  About 2 years later Larry Scarenzi did it right with another scared kitten using a Russian F2D motor but he used the correct prop and was much faster than mine.  His square loops were breathtaking and over in about 2 seconds!

Made a spinner-nut in aluminium today, looks a little better then just the regular nut and washer that I used before: 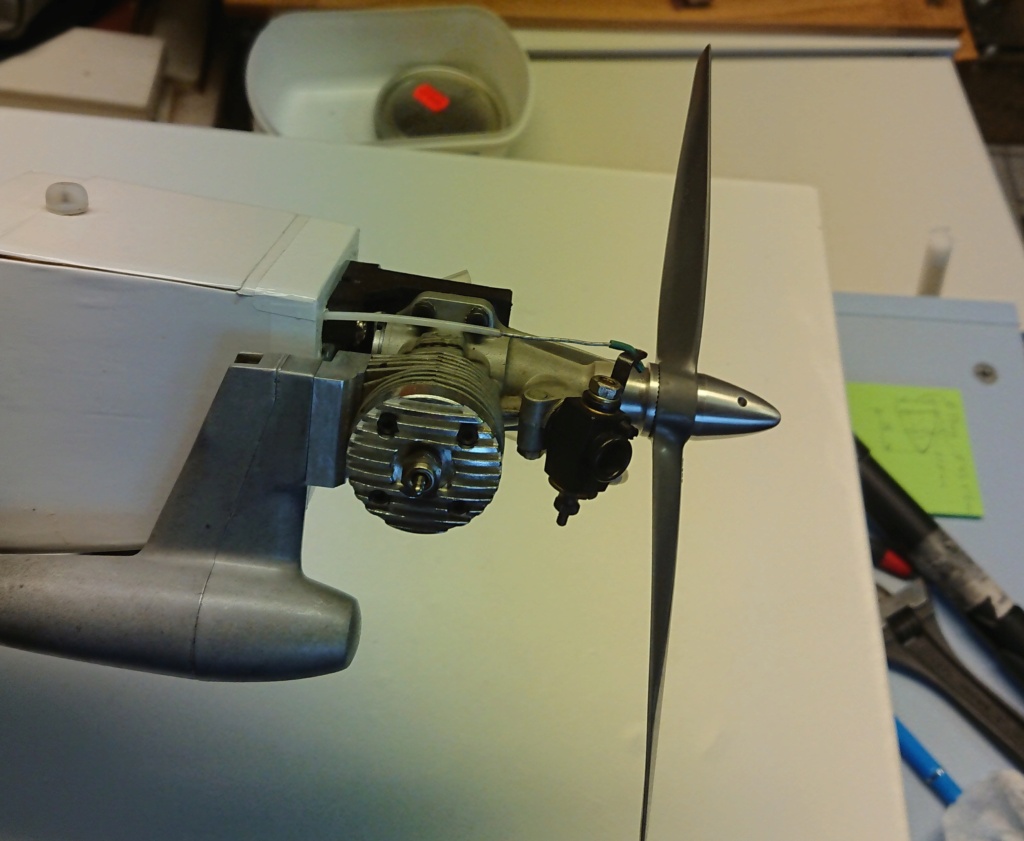 Thanks, with the right tools it is just as easy and rewarding to work with metals as it is to work with wood.

Looks line it was made for it!