You have to love the names. I think the colors, the wording, it meant a lot to us. I mean think about Fox fuel, Missile Mist, how original and it was the deepest purple color. How cool was that. It ruined my shoes, my mom was hot and I got yelled at for nearly 15 minutes.

You're on the money Ken. 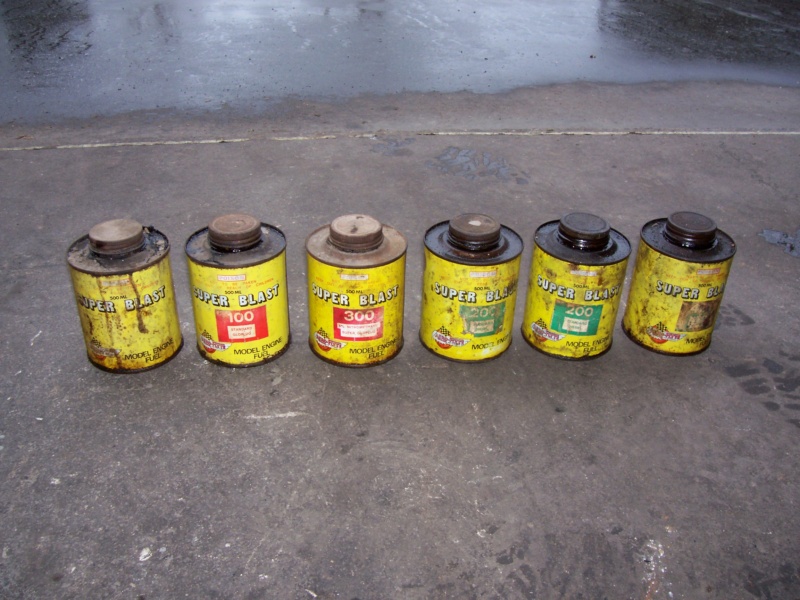 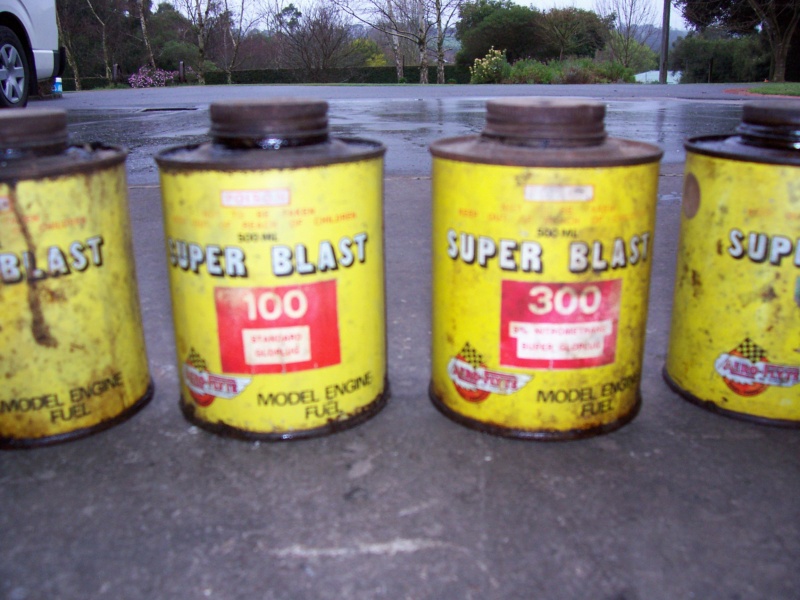 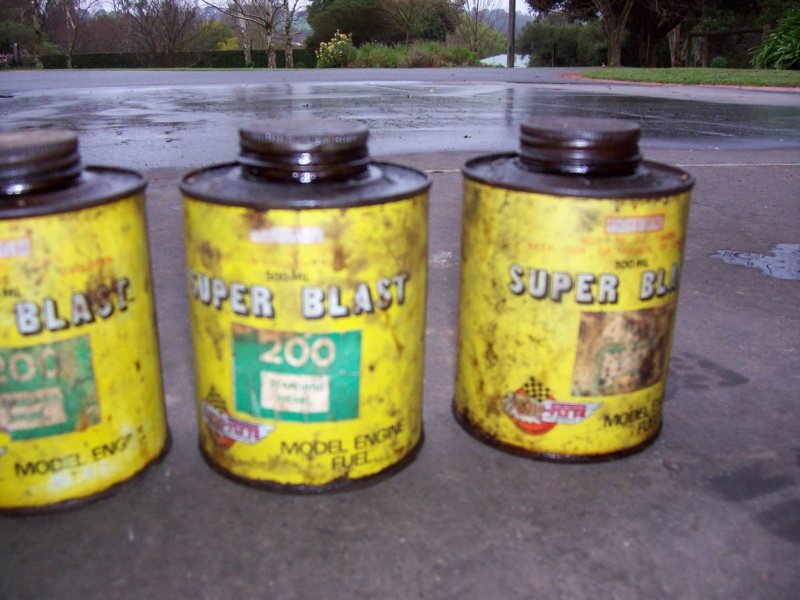 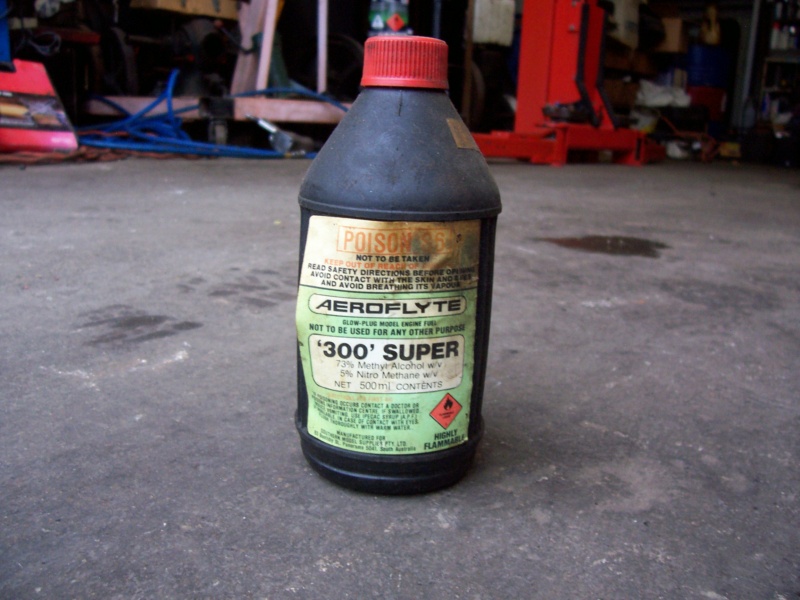 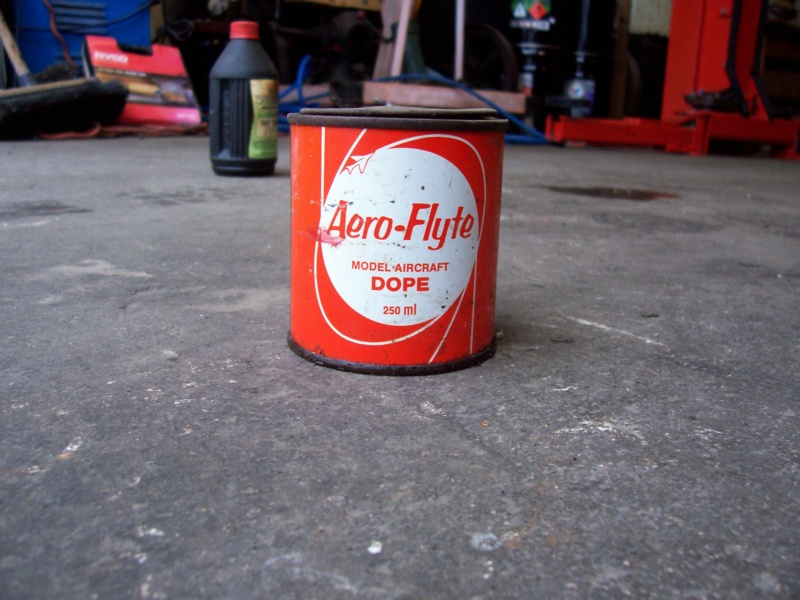 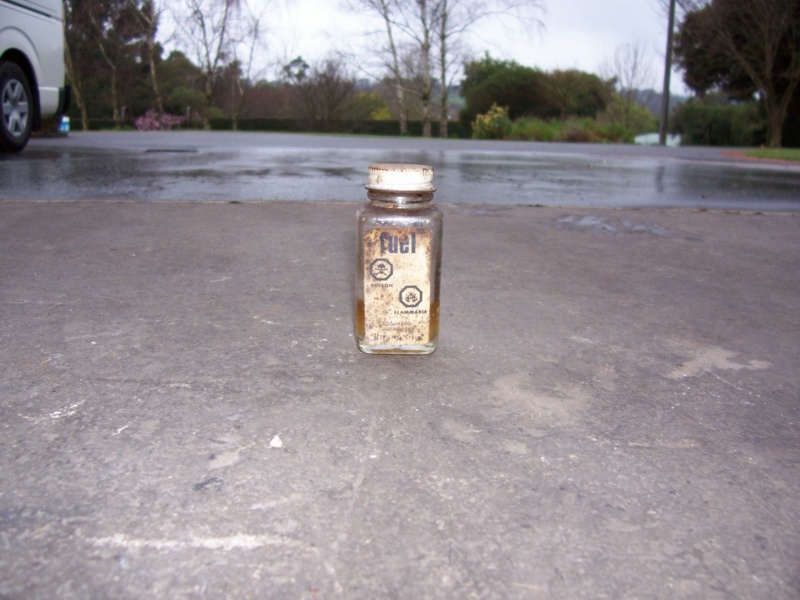 100 was standard glow o% nitro.
300 was super glow 5% nitro.
200 was standard diesel.
400 was super diesel.
All the yellow cans are from the 70s.  Plastic bottle would be late 80s. They haven't survived the rigours of many years stored in an open sided farm shed.  The diesel cans still have some in them.  The 400 is over half full and fired up my Taipan (what else?) Tyro no troubles at all 5-6 years ago.
Not sure about the dope can (mostly full still) but I'd say early 70s, before my time of building.  Think I got it in a job-lot of stuff I got off a high school teacher.
The final shot is the original glass bottle of Testors fuel that came with my P-40.  The original pink fuel was exhausted the first day before I even got the thing to run.  I took the bottle in to have refilled at the local sports store who mixed his own.  (What's Nitro?).
That thing never did run until I got a red & white can of Cox Glow Power Fuel like in Bob's first picture.  Sadly that can didn't survive.
Rod.

Oldenginerod wrote:Give me a day or two to get some pics and I'll show you some cans that I bet no non-Aussie has seen

Close Bob.  The Wombat soup is a particular delicacy. Won't fire an engine though.

The traditional Aussie recipe for cooking a Cockatoo is well known.
Pluck & prepare the bird.  Place in a pot & cover with water.  Add a large rock to the pot and boil for 4 hours.  Throw away the Cockatoo and eat the rock.  I suspect Wombat might be just as tough

Interesting pictures Rod, with those round cans you and Rene have some very unique collectibles. First round cans of glow fuel that I have seen in my 82 years. And amazing how Ken nailed it. As educated guess! How does he know this stuff...

Well I was surprised when I first saw the Cox fuel in a square can.  I'd only ever seen round.  Even up until recently, a guy in Melbourne Victoria was sell "Combat Kid" model diesel fuel in round cans.  Must be sort of a tradition, maybe with diesel.

By the way, I've never actually tried the Cockatoo recipe, or Wombat for that matter.
Mind you, if we could learn to eat them we'd never run short of food out here. They are both prolific to the point of being nuisances.

Marleysky wrote:I think the best one is the little round Cox fuel can, 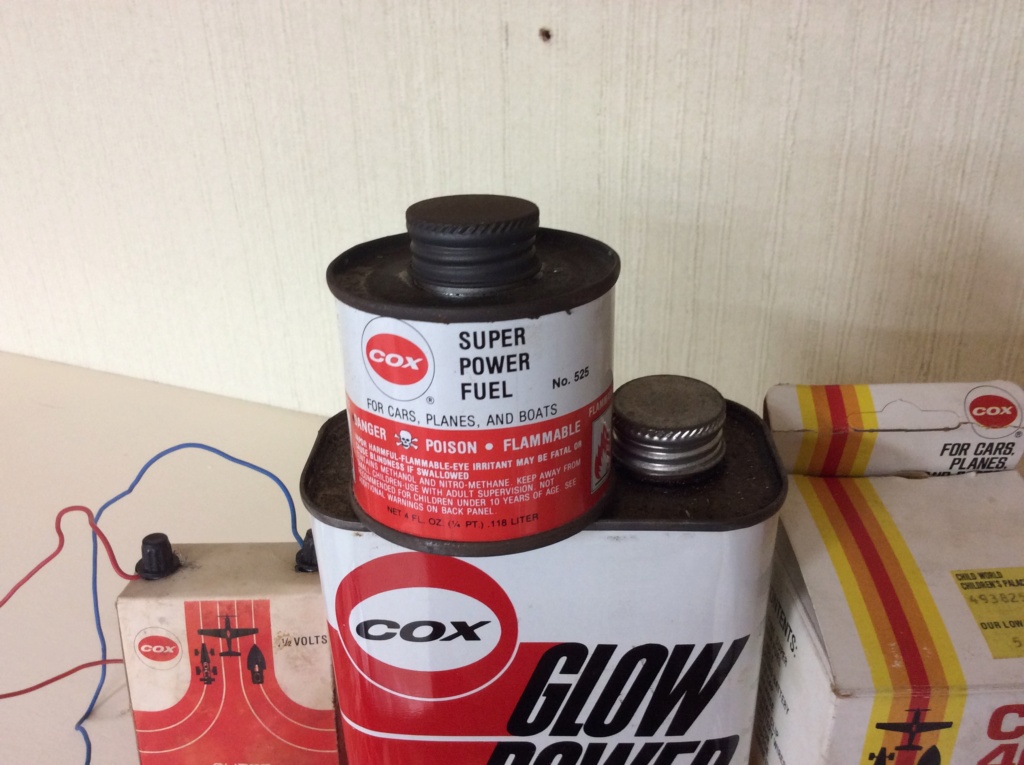 You're on the money Ken.

This is some very interesting trivia! I have never seen any fuel in small round cans before! Thanks for sharing, Marleysky and Rod!

I will agree i have never seen round cans either / Very fun stuff and interesting too !! 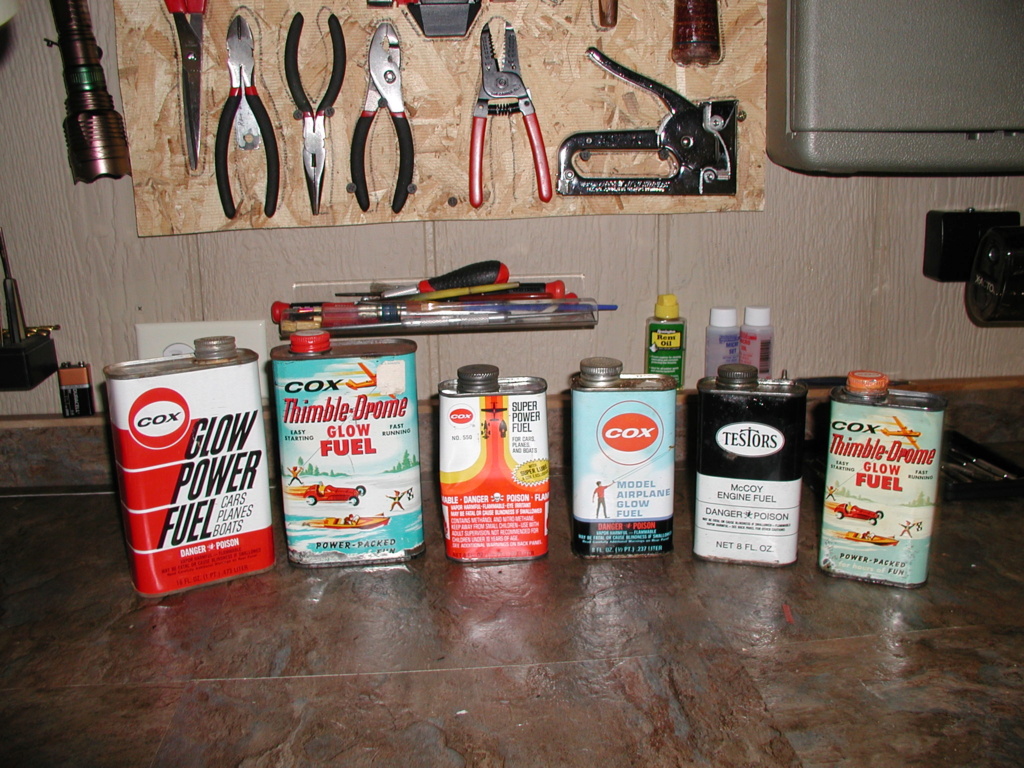 Of these six cans the three middle ones have fuel in them starting with the quart Thimble Drome can.

The left one about 3/4 full, middle 1/3, right 1/4.  When the spirit moves me I'll dump each one into a glass jar and check for contamination.  If not too bad, I'll strain through a linen cloth combine them all and see how they run an engine or two.

George, I had a fellow club member years back who was raised in Australia . I haven't seen him in at least ten years. I'm one of the young members of the club and most are not even flying these days. When I go out to fly nowadays, I'm lucky to see 5 members. 20 years ago, there would be 20 members on any given weekend and sometimes more. When we were waiting out turns to go out and fly, discussions were always going. I remember the fuel discussion where the Australian member Tom mentioned Aero Flyte fuels. Now if my memory could've retained my schoolwork like my hobby, I would've probably been a lot better off.

There was nothing else generally available to my knowledge, apart from Cox 1/2A fuel. Well, not around these parts anyway. You used Aero Flyte or you mixed your own. Most hobby shops had the raw ingredients and they could mix it to order. You could just walk into the local fuel depot and buy some Shell Racing "A" and Castrol "M" and you were set.
The SuperBlast 100 was probably equivalent to your FAI fuel- no nitro and all castor. In fact, I would suspect that the whole range was all castor- no Aero Flyte fuel had any colour to it in my observation up until the plastic bottle I showed, which has a slight green tinge.
One thing I did learn was that a Testors .049 wouldn't start on 0% or 5% nitro fuel. That's where my only ever can of Cox fuel came in.

I’m just posting this cause I just found these on FB marketplace !   I might buy em just for fun! 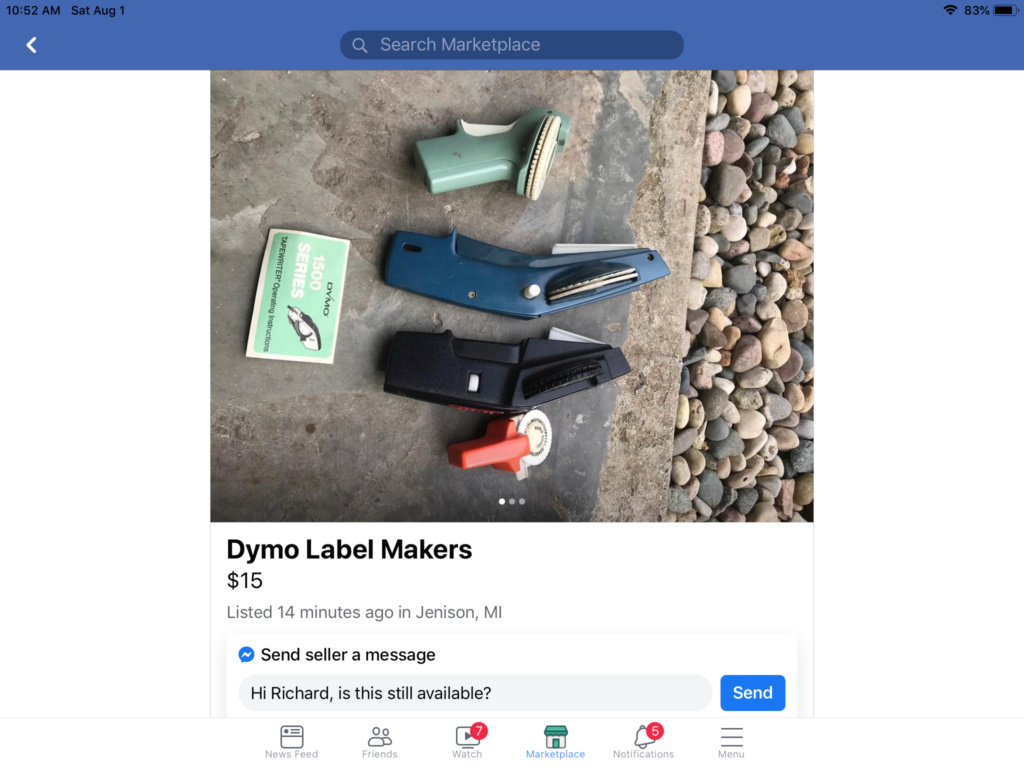 Cool ! Can u still get the label tape ?

Marleysky wrote:I’m just posting this cause I just found these on FB marketplace !   I might buy em just for fun! 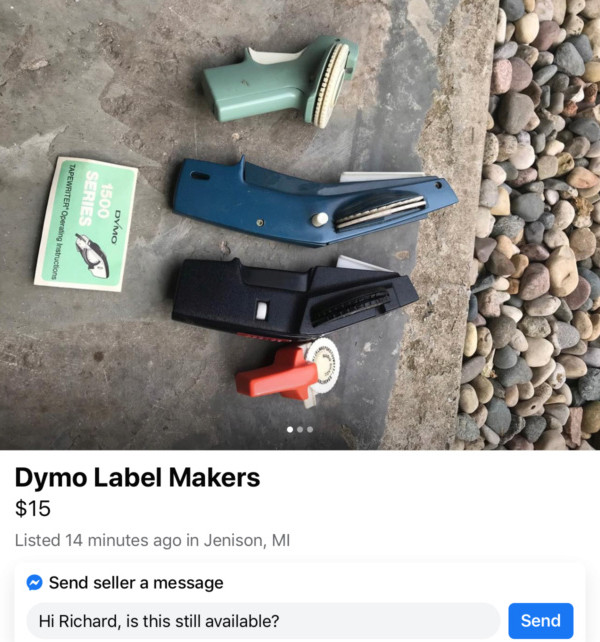 I still have the top one, except it is red in color. I used these starting almost 50 years ago, to make radio panel item labels for homemade radios and amplifiers. Even used them on my RC transmitters. 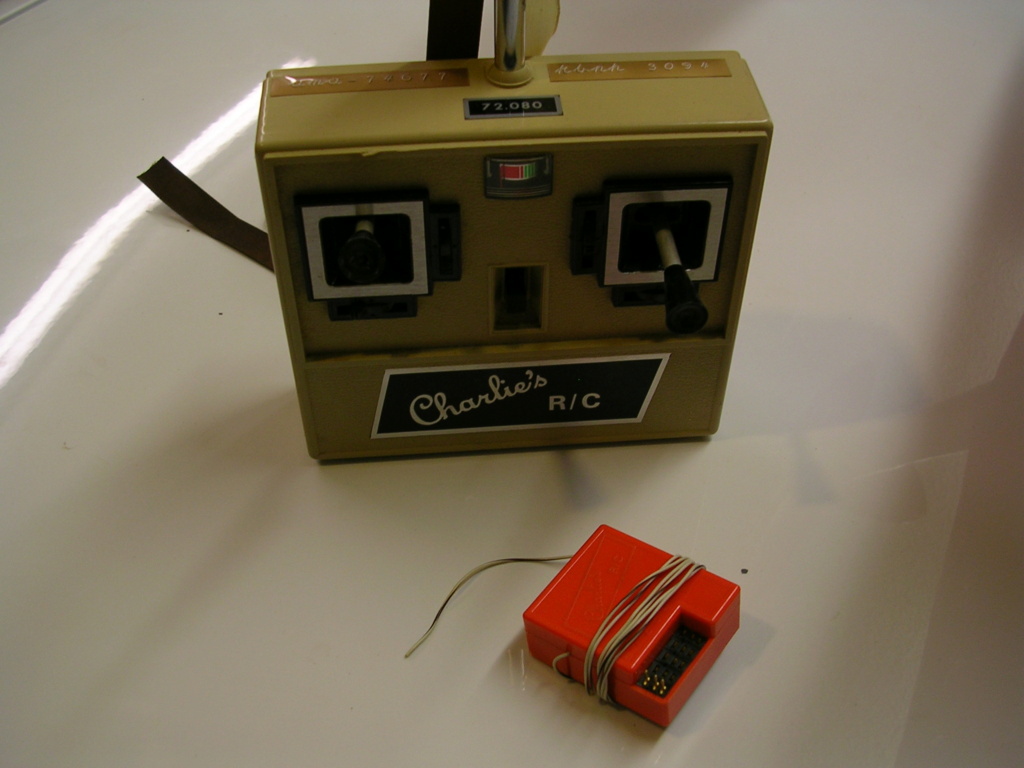 On my Charlie's R/C kit radio (Charlie was Bill Cannon's wife, this was the kit version of Cannon's Model #810 4-channel mini transmitter), I used the script wheel. On top you see AMA 74677 and KBNH3094 (my FCC "call sign" license for my permit, back then you had to pay a fee, send in a non-test application for a permit).

It is amazing that you can still buy tapes for these, although the modern electronic label makers are vastly superior. 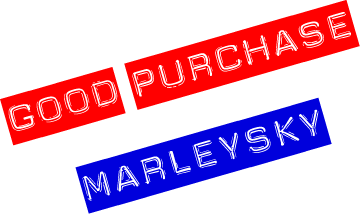 Now someone needs to label some fuel cans.

I just posted my engine for the month and it has one bottle and one can of Cox glow fuel (original Cox fuel still in the containers).
I also have another bottle of Cox glow fuel as well that I did not include into the photo.

Also have a few cans of Fox racing fuel and Missile Mist fuel as well. 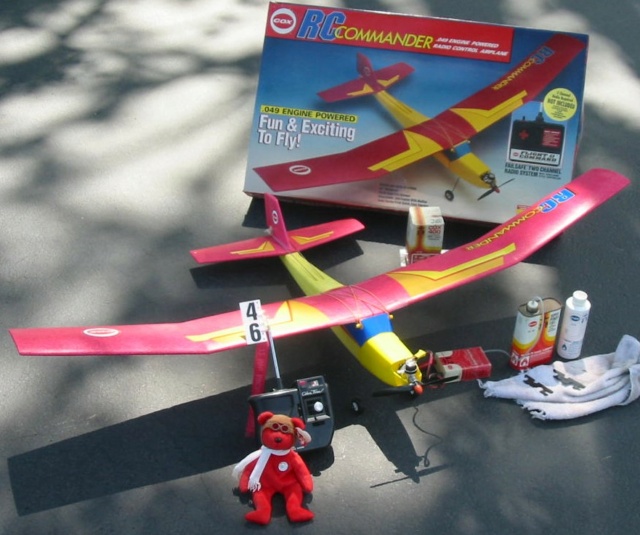 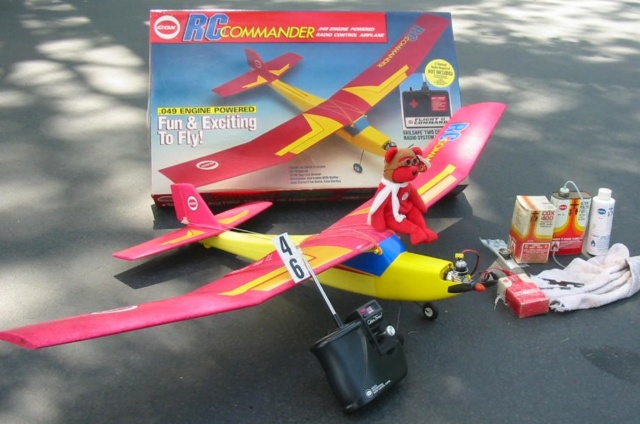